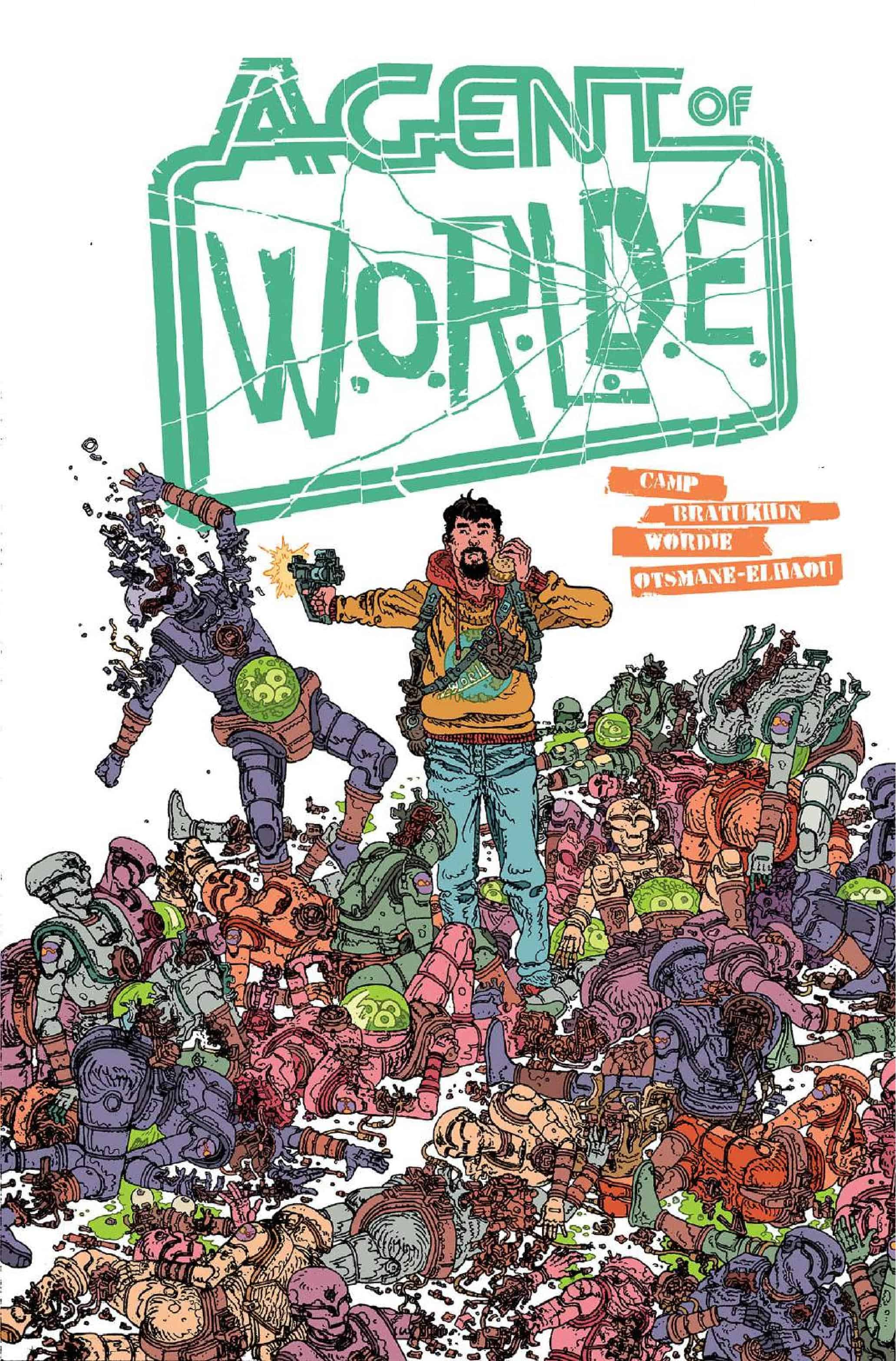 I have had the review copies of issues one and two of AGENT OF WORLDE on my laptop for a goodly length of time now. In fact, I even have a copy somewhere of the original draft iteration sent out previously by writer Deniz Camp. Every now and then I’ll open the pdfs and read through them and the same thing runs through my mind every time and that thing is HOLY F@#$% S@##! Let me explain… 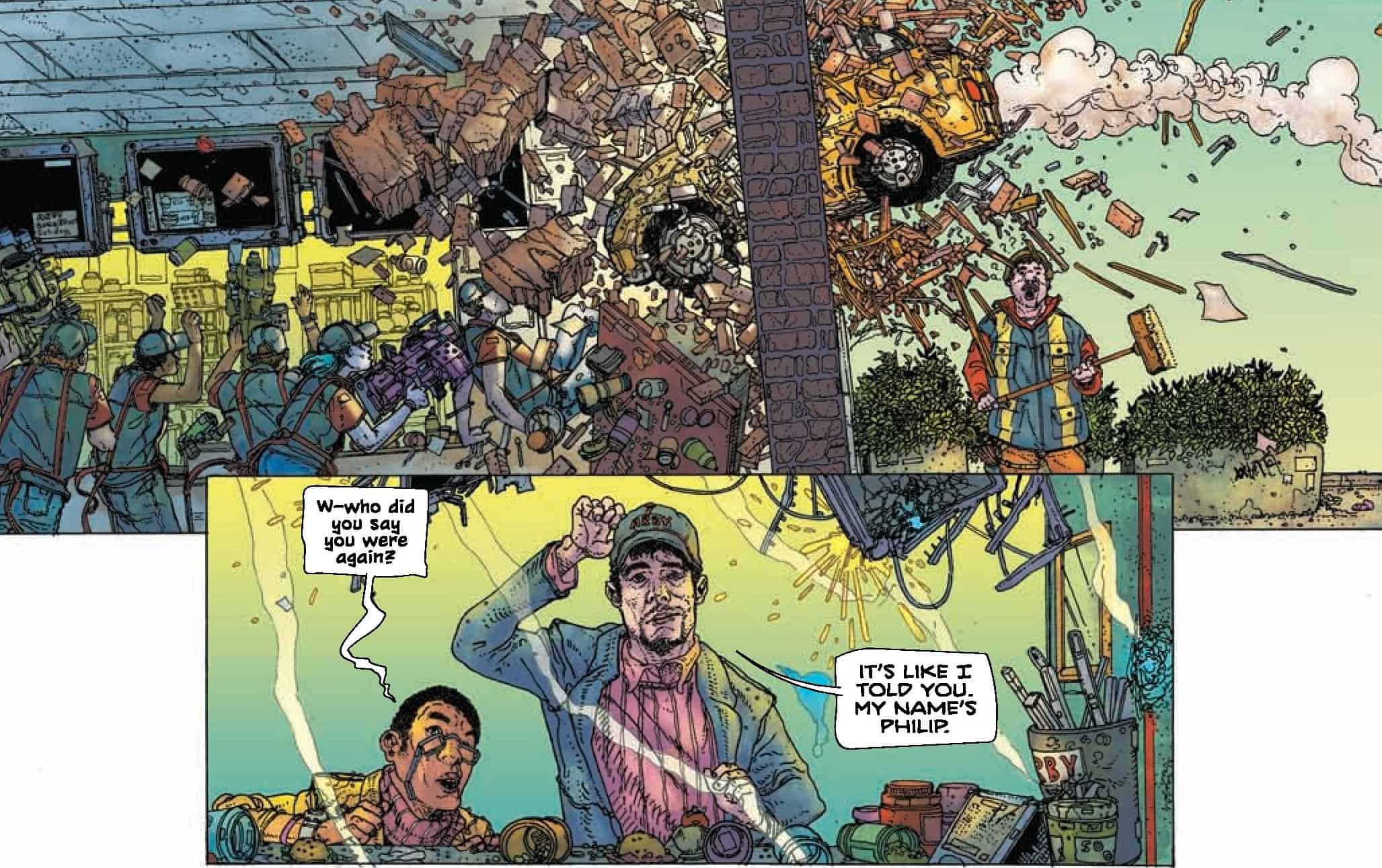 I’ve sifted and struggled through my rather mediocre language as a writer to latch onto a
description that would succinctly describe what this comic is about and this is what I’ve come
up with. AGENT OF WORLDE #1 is Time Cop crossed with the X-Files if Hunter S. Thompson wrote it while he was peaking on the strongest part of his LSD trip in Fear and Loathing in Las Vegas. It’s a sci-fi spy yarn written and illustrated (we will talk about the art shortly)in a super detailed psychedelic hyper-detailed manner that sucks your eye in with both the exceptional detail paid to every single frame but also the absolute gonzo nature of what you are faced with page after page. This comic is buck wild from start to finish. 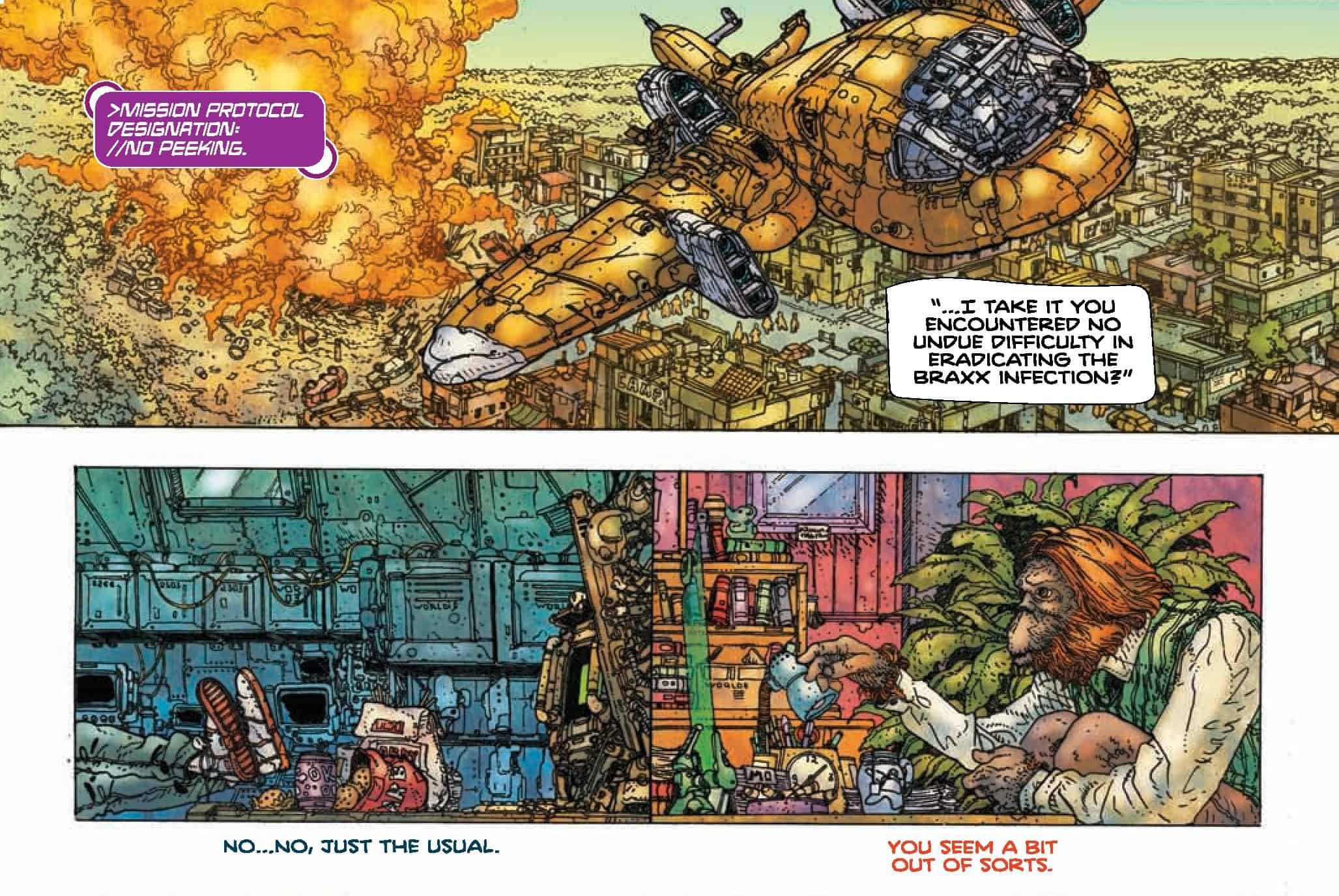 The premise is simple and not unfamiliar. a secret organization that protects the timeline from interdimensional, temporal, and all other sorts of extra normal threats sends their best chaos agent on missions that threaten the status quo. Simple enough right and yet writer Deniz Camp and artist Filya Bratukhin (If this is not a name you recognize after reading this comic you will NEVER forge tit), colorist and designer Jason Wordie, and letterer Hassan Otsmane- Elhaou have taken this idea and dipped it in the strongest LSD they could find and then splashed it across 35 pages of debut comic and the result is absolutely MESMERIZING! 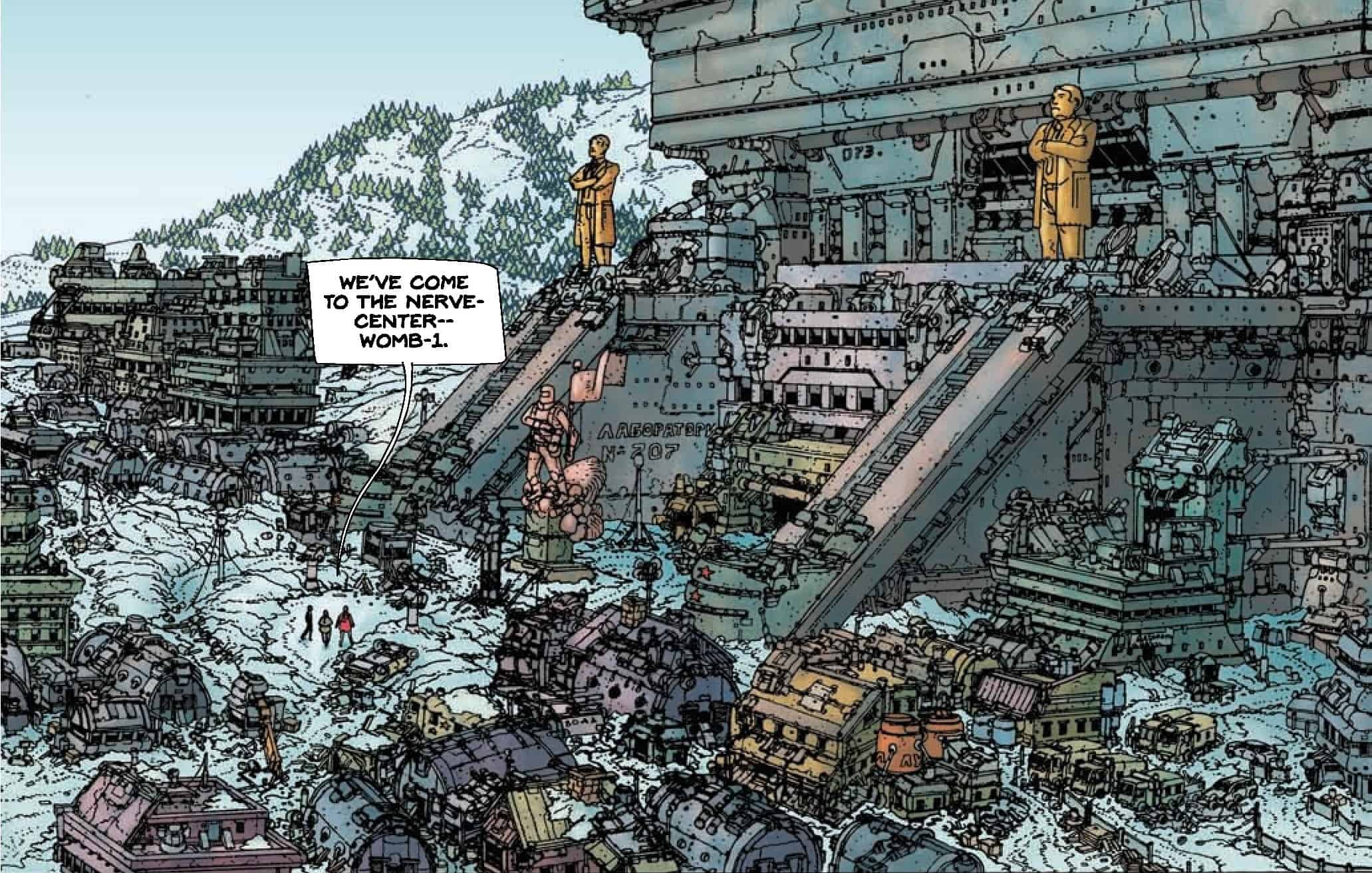 Camp’s script and dialogue are sharp, throwing around gonzo concepts like jet packs powered by sex energy and Orangutang bosses that have regular mind wipes and alien worlds within worlds with such self-assured bravado that they feel immediately comfortable as part of our main character Philip Blank’s world or should that be Worlde? Camp drops us into the deep end in a totally chaotic and nonlinear fashion with the opening sequence and then builds the world out from there into Blank’s next mission which includes mad scientists, secret Russian superscience manufacturing cities, and a whole bunch of teenage self-aware AI that Philip and his temporary, super-powered partner (who’s a bastard to boot) have to defeat and do with a explosive sexy solution…No I will not elaborate you NEED to read this for yourself. Into all this gonzo SciFi superspy sex nonsense Camp deftly threads another interesting idea…our chaos agent Phillip Blank has a secret of his own… one that may soon put him at odds with the organization he serves. Is Phillip the good guy or the bad guy and is this WORLDE agency doing the right thing or like many secret agencies merely acting in the interests of being in a position of power? I know I’ll be reading to find out!

Artist Filya Bratukhin and Jason Wordie have taken Camps’ script and brought its wildness to life in a way that defies description. Every single panel tells a multitude of stories in a hyper-detailed style. In fact, I cannot think of a single comic I’ve read in recent memory that comes close to the level of detail that Bratukhin brings to even the tiniest image in the tiniest panel of this comic. There is a chaos to the art style perfectly suited to the story being told on-page through the script, a psychedelic sensibility which one moment has our secret agents arguing in with each other in the snow and the next defeating mad Russian scientists with chaos theory, toys and sex powered backpacks interspersed by flashbacks of being inside alien spaceships (not kidding this book is wildly entertaining). The hyper-detailed nature of the art can make absorbing the information of the panel hard sometimes but that’s just a really good excuse to read it again. Wordie’s colors are a wonderful blend of shaded primes that run the full-color spectrum and help define and separate the chaos and
heavy detail of Bratukhin’s art. This is a comic where the effort that has gone into every page is staggering with splashes that capture the eye for long minutes at a time. This is once again another creator-owned comic that has the feel of every single person who worked on it giving 110% to what’s been left on the page. Hassan Otsmane-Elhaou continues to teach us that lettering is an art form unto itself with every comic he letters, this one is no exception.

Agent of Worlde #1 is a staggeringly superb effort from the entire creative team involved that takes ideas like time travel, alien invasion, artificial intelligence, James Bond-like spies with amazing abilities, and chaos theory then dips it into a vat of LSD and splashes it across thirty-five pages of one of the most original, wild and marvelously executed comics I have ever read in my entire life. This comic is spectacular.