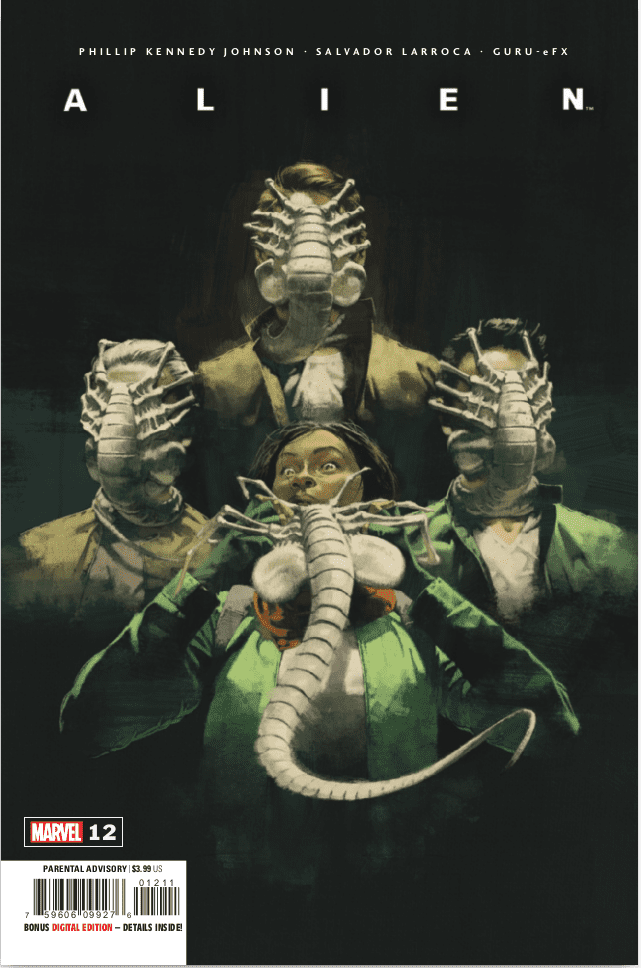 As Jane questions her own faith she leads the last few survivors through the maze of the Gamma terraforming base to find a way out. But not only does she have to contend with the true treachery of both Ambrose and Gregory, but also the arrival of the U.A. contingent come to assess their investment. 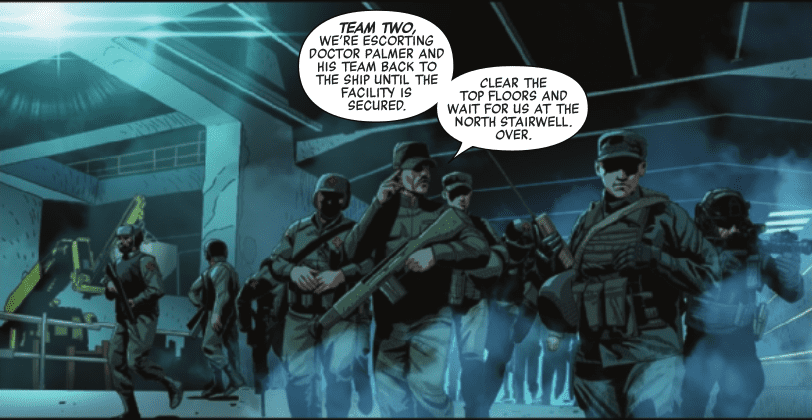 Yet again Marvel have taken the bull by the horns and created another character based narrative true to the best of any of the tales of old. From the start this second chapter in the Marvel canon has managed to imbue the characters with a true pioneering spirit, reminiscent of the first Aliens versus Predator crossover, and I say that as the hugest fan of that whole Dark Horse era. The dilemmas that they all face is organic and feels genuine. As such I think Phillip Kennedy Johnson played it well, and created characters to believe in and not just to fulfil the criteria of cannon fodder for the sole purpose of another story starring the Xenomorph. The Alien is of course an added bonus and ensures that it holds its own alongside the best of previous stories including possibly some of the latest series of novels such as Isolation and Phalanx. But to me the whole of the Revival storyline is about the human characteristics and the trials and tribulations they go through, as well as their determination in the face of the unknown. 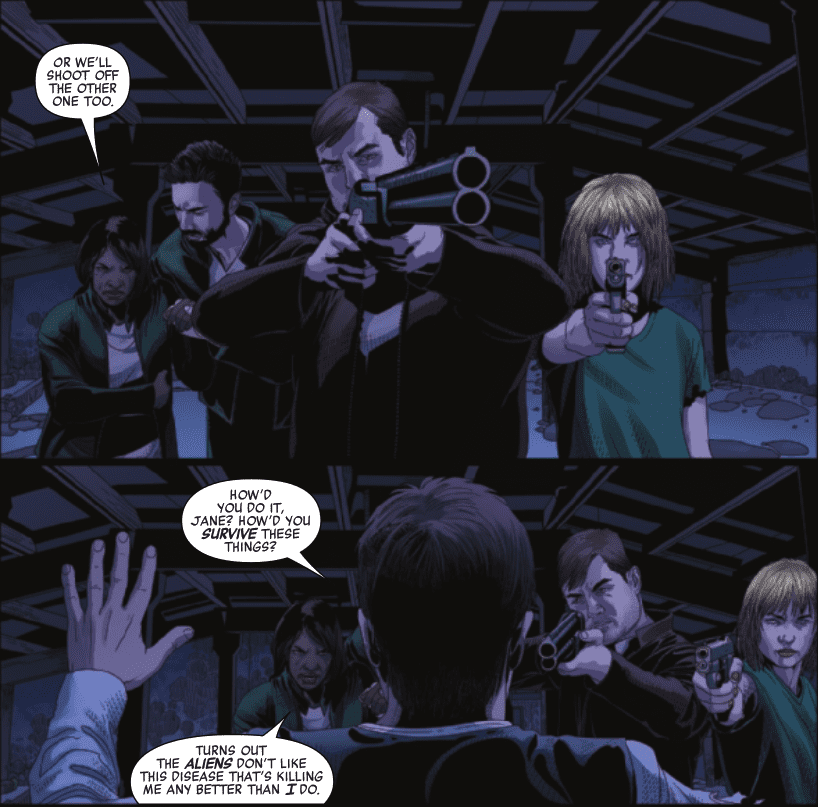 And right from the get go in the final issue of this chapter it goes for the jugular, with the main character having doubts about faith versus dogma, allowing us to have empathy for her and root for her, giving us a protagonist we can emote with. Because we understand her as she questions the very nature of her belief. Is she praying more out of habit, or does her disillusion with religion stem from her mistrust of those in authority that she previously had faith in? Does she still actually believe and have faith in her God, or is it just a thin veneer of armour that she wears to protect her from the horrors that she is facing? And as the answer comes to her in the form of her own sickness protecting her from infection, it’s clear there is a chance she can not only survive but be the saving grace here for those around her. 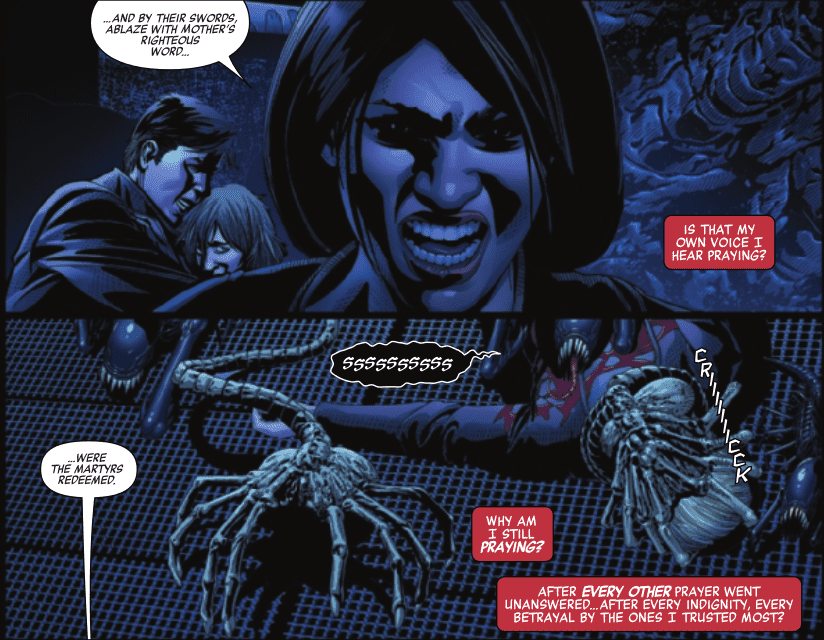 I’m most surprised she actually sees the alien bleeding as a bonus or a tool she can use. This is normally the plot device used to ensure the characters don’t add to the risk. Bold move. Right up to the close I was kept guessing as to who, if anyone, would make it out and escape both the main threat and the insidious Company. And of course the Company underestimate the threat…even with their military armaments. But I didn’t expect the reaction to their ‘man’ on the inside. And the “Pinocchio thinking he’s a real boy” comment to Gregory made me chuckle and it reflects on all the other synth antagonists we’ve seen from A to…D. 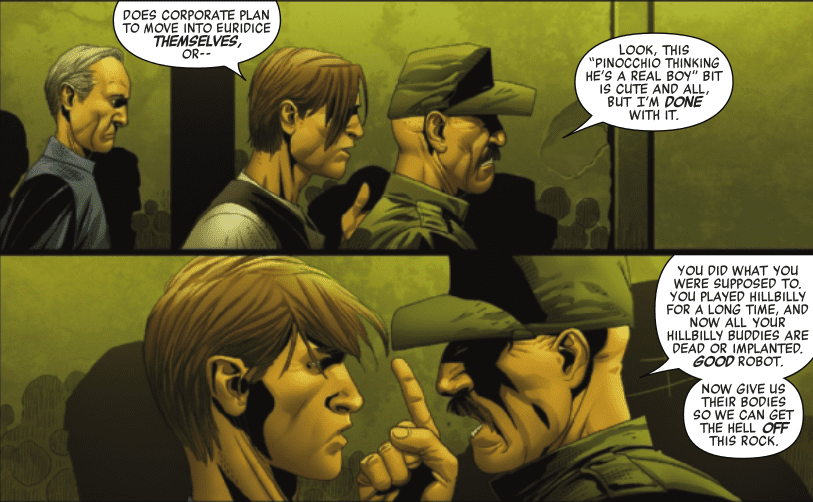 As such the writing wasn’t just the run of the mill ‘bug-hunt’ but a story with actual drama and action. And of course Salvador Larroca continues to keep the pressure on with the art, ensuring it matches the story perfectly. From the pulse pounding imagery of the dark and gritty terraforming station, to the aliens overrunning the complex as they make a grab for the other antagonists who put them there. I loved every panel, especially the facial expressions all clearly defining not only the text but the subtext with every grimace and smirk. This is Salvador at his best, with clean lines and well defined figures, all perfectly framed by the surrounding scenery, that gives a great backdrop to the drama as it unfolds. And of course the GURU-eFX colors bleed through the foreboding shadows and give each page a perfectly organic feel, both in background hues and main characters. 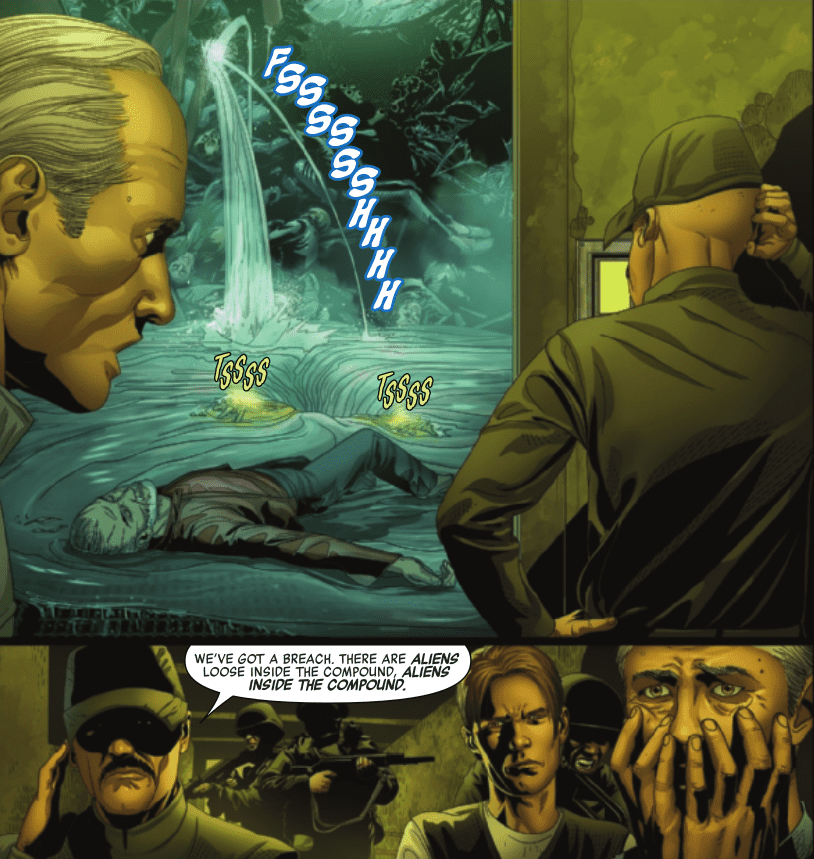 And to top it all off the Marc Aspinall cover is almost giving me Bohemian Rhapsody vibes, which if deliberate is hilariously fitting and works on both levels as tongue in cheek homage (if it’s even meant and I’m not reading too much into it) and is a thing of terrible beauty, giving the perfect ambiguous image to draw you into the story inside.

All in all a great action packed finish to the next chapter. With crisp, clean art and well defined pacing and plot. I can’t wait to see what comes next.