Alien #2: The Art of the Steel Team 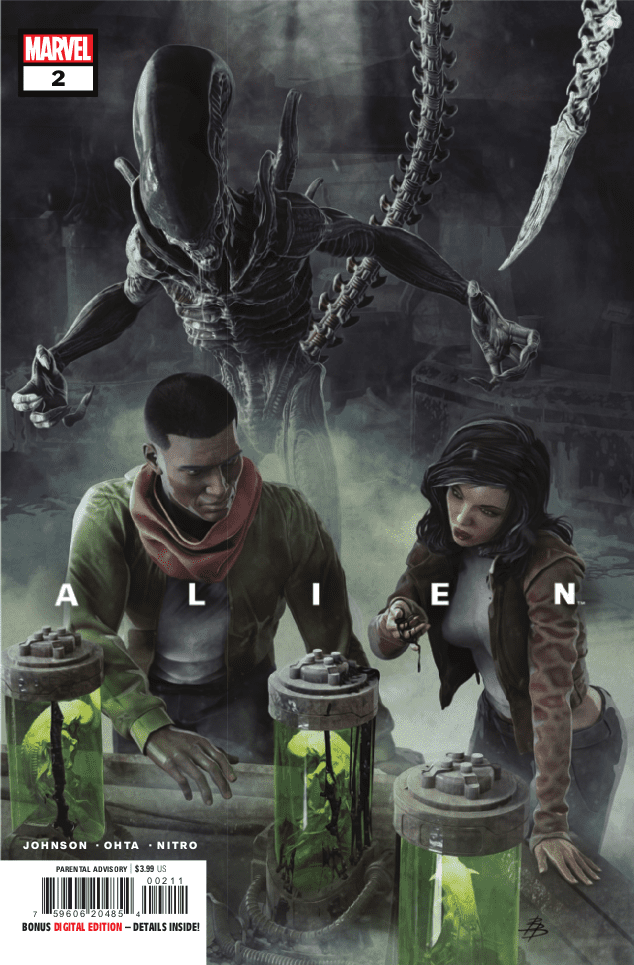 The Steel Team have been given a mission that, if they succeed, will give their brethren diplomatic immunity and freedom fropm persecution. All they need to do is go on an egg hunt. On a planet rife with nuclear fallout and teeming with unknown lifeforms created form the nightmares of the miliaries best and brightest labcoats. What could possibly go wrong? How about an unknown variable in the shape of human interlopers. 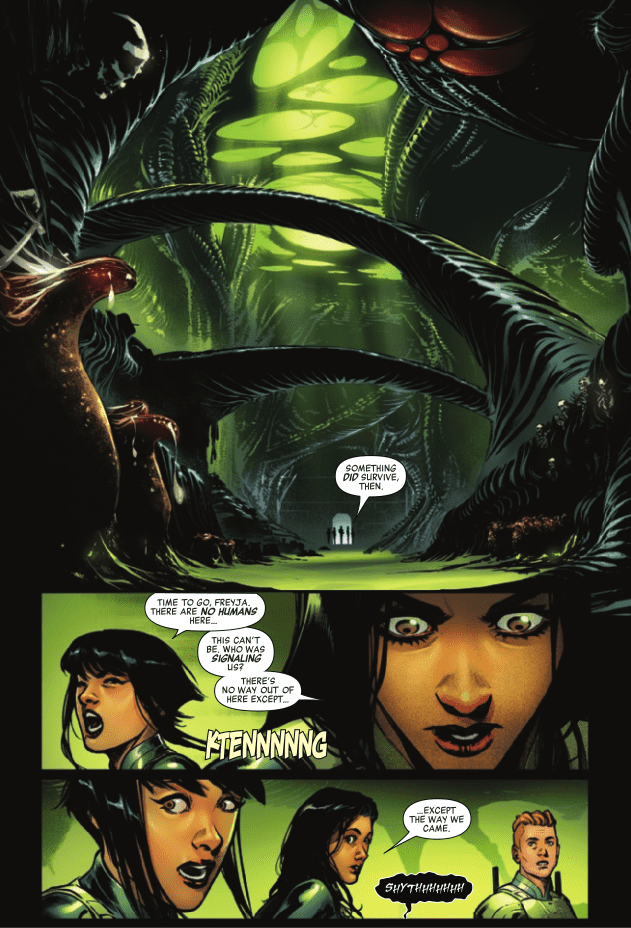 I have to say I was disillusioned with the art in last years Alien debut. However just these last two issues by Julius Ohta have reaffirmed my faith in Marvel’s commitment to ensuring the xenomorphs have come to the right home. He has given us an almost symbolic change from a synthetic, sterile and soulless to a more organic, humanist and dare I say ‘messy’ style. Not messy in a toddler’s picture-on-the-fridge way. But an organically realistic, thought out style. With some real care and attention put into the raw details. This change is ironic, given the character shift this issue, as the spotlight dramatically switches from the Steel Team to the arrival of the survivors of Tobler-9… And I have to say I can’t think of that name without wanting some chocolate. Stop it. Focus!! Back to the art. There is nuance in the set pieces, with natural flow and movement to the characters. As they each make their way through the landscape I can visualise them actually picking their way carefully through the debris. The sheer magnitude of the ravaged vista dwarfs them and makes them look so out of place and an easy target. All while the sunlight streaks in on a wasteland, picking out shadows that can hide so many threats. Leaving us to wonder if anything is going to spring out at them. And the colors by Yen Nitro render the page with depth, while fleshing out the characters and giving the desolate landscapes a lost and empty feel in stark comparison. 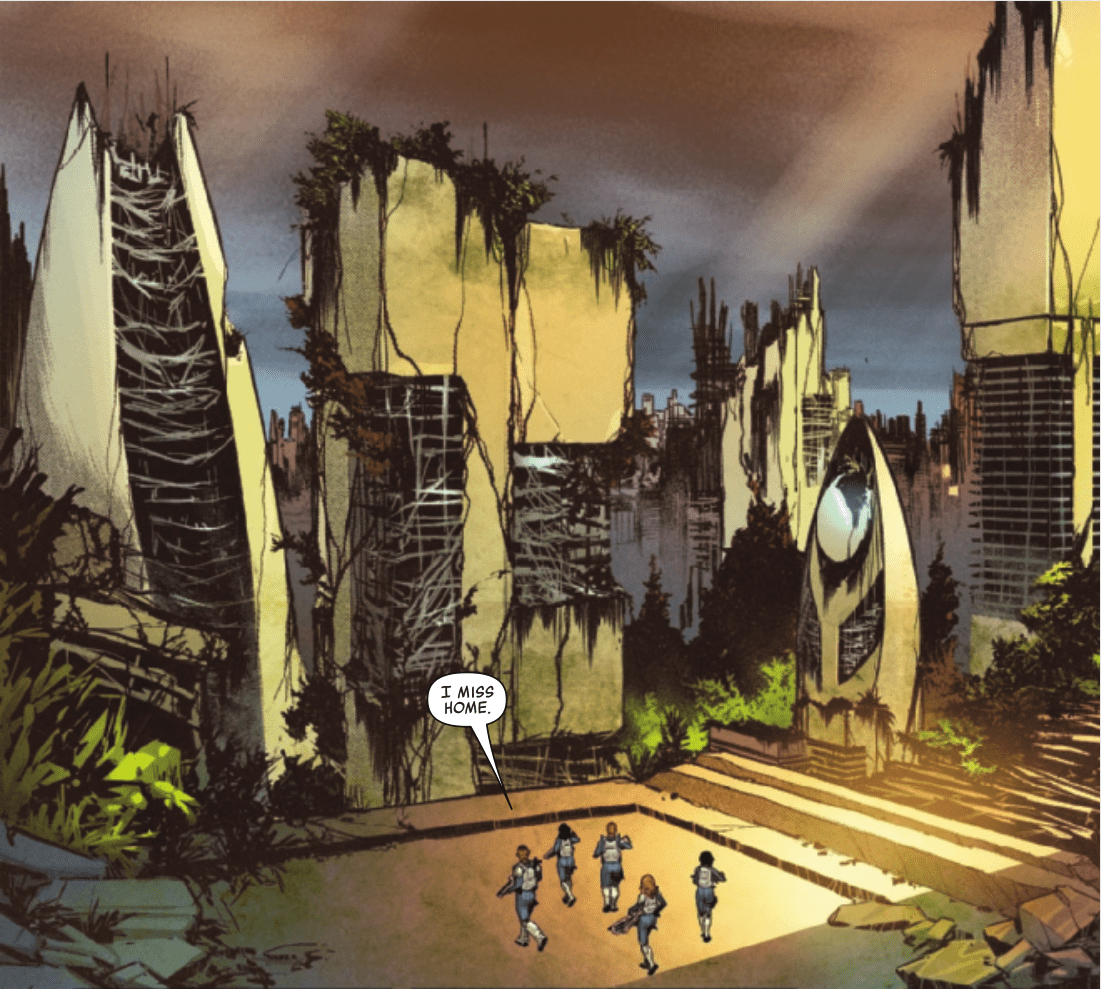 And the most powerful thing about the art is the way it feels natural and organic. And not just some digitally created image that may seem crystal clear, yet loses the soul of the piece and detracts from the story. And here too there is some soul and humanising elements. As Philip Kennedy Johnson introduces us (at last) to the main players in this opening initial recon, it was a solid way to properly inform us about each characters ethical values. And also how they see each other as teammates. Although we are dealing with synths, it’s clear much like Ash and Bishop, they all exhibit a wide range of personality traits and individual opinions. Especially when it comes to their creators. Last issue they were clearly of one mind, total mistrust of the humans. But now there are a few inherent tics and differences in opinion coming out. Seth is slightly in awe, while Eli and Astrid clearly hold some resentment. I’m intrigued to see how Phillip effortlessly gets us to engage and empathise with the team via their quirks. Being as they aren’t even human. And as they come face to face with the eponymous threat I did at the very least root for them to give a good account of themselves. Which they did. In fact I was almost disappointed to see the arrival of actual humans. Who by all accounts have been surviving unaccounted for decades, based on Eli’s statement the last issue. And we are left wanting more as they meet. It will probably come to pass they will have to fight them to get what they really came for. Or they will have to either help them get off world, or both teams will have to team up to survive. Whatever happens it will only ramp up the confrontational attitudes going forward. 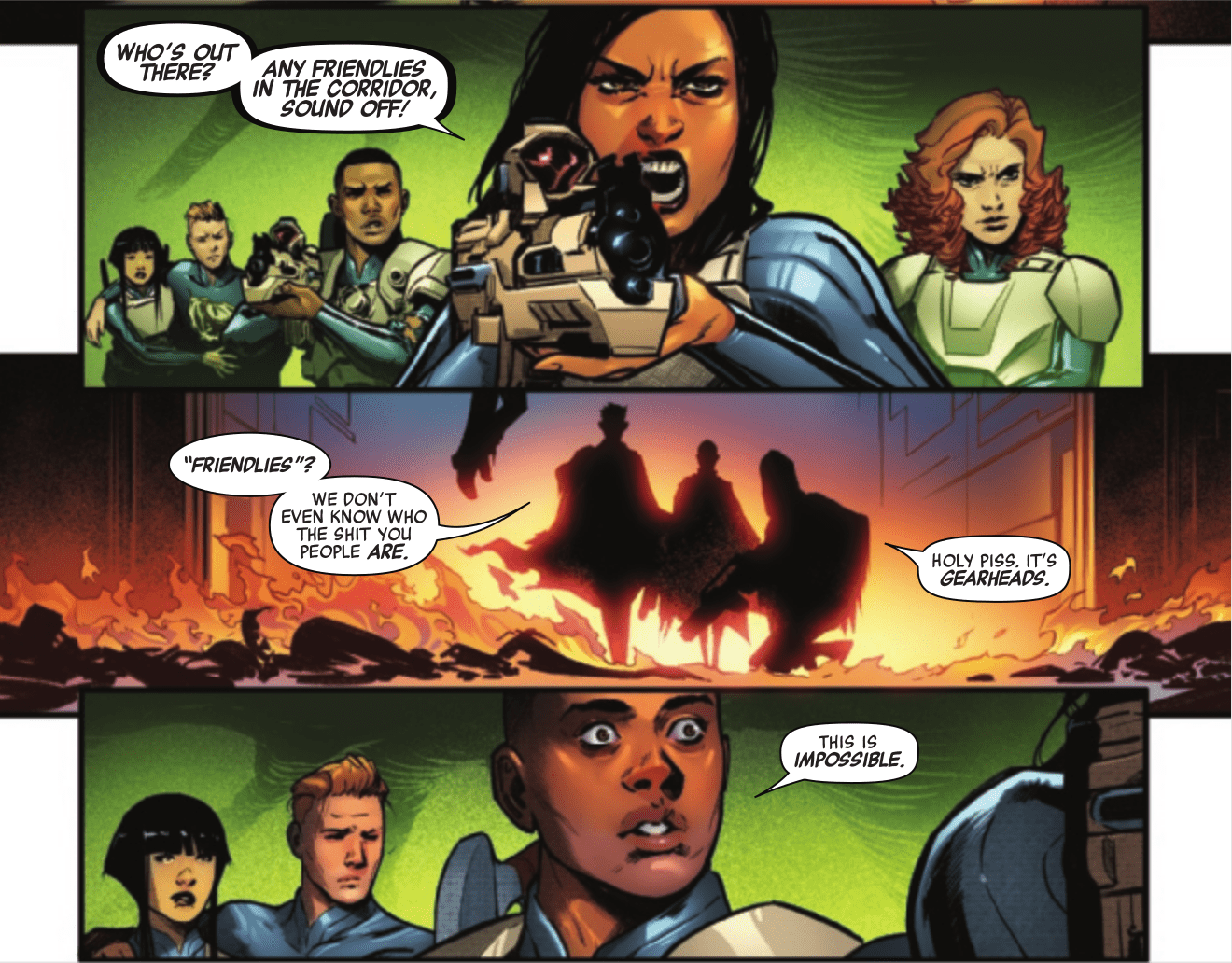 And the discovery of the survivors is not the only intriguing thing about what they find in the bowels of the Bioweapons Division. It’s clear a face-hugger didn’t attach itself to no Tiger Mosquito. The Labcoats have been very busy. And it’s always intrigued me since the spore scene in Alien: Covenant as to how things would look going smaller instead of bigger. A swarm of these little beasties could really get the body count ratcheting up. So with the expanded menagerie that’s been created and the new arrivals…. it looks to be an action packed drama-fest next issue! All topped off by another pulse pounding cover from Björn Barends, promising so much foreboding menace as the team inspect the fruits of the Science divisions labors.

I’m bowled over by both the organic fleshed out art and the humanising touches to the synths. This is shaping up to be a great stage two in Marvel's Alien lore.

Alien #2 The Art of the Steel Team