Aliens: Rescue #1: Survival of the Fittest 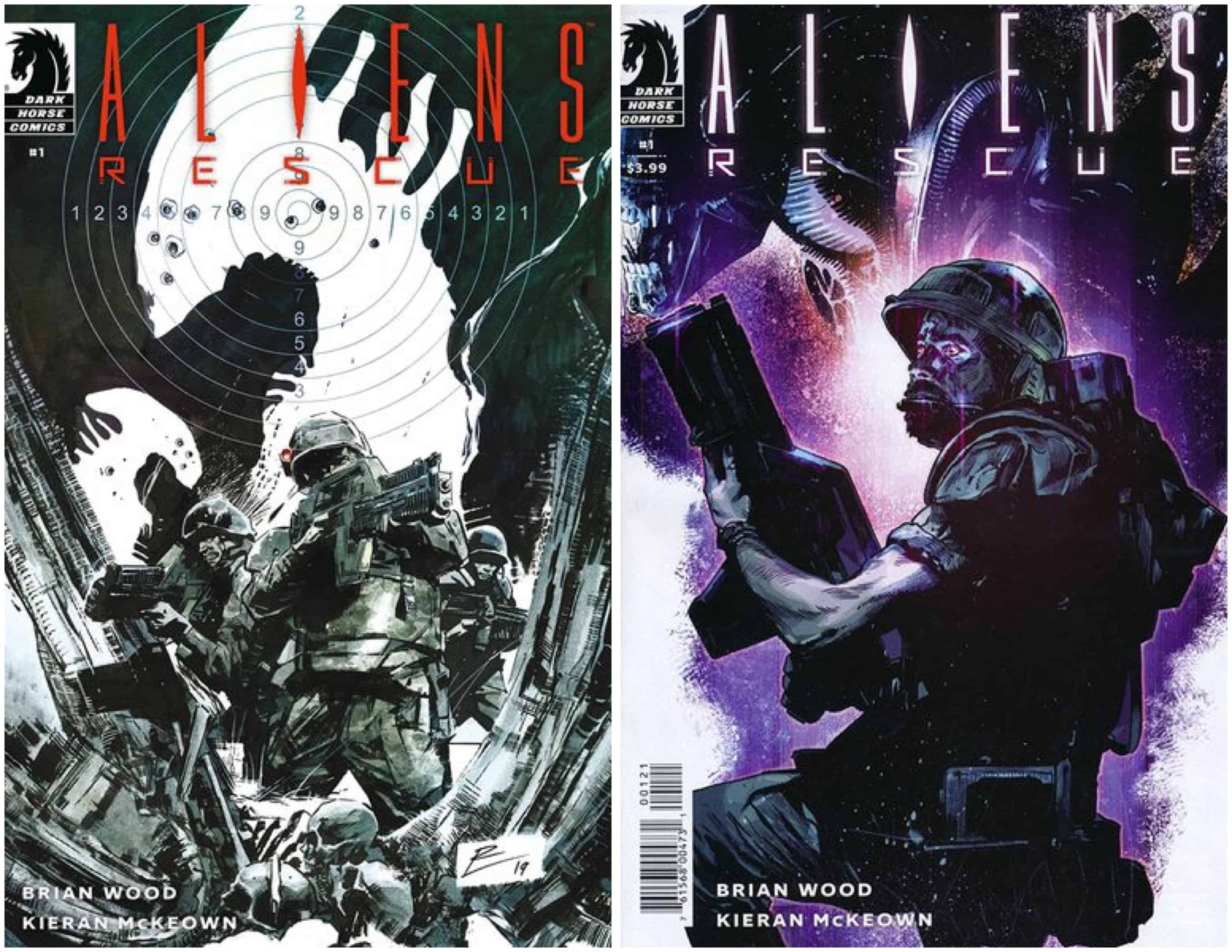 Some years after the events of Aliens: Resistance Alec Brand is a member of the United Americas Allied Forces. During his interview with Bowden, a representative of the Colonial Marines he recounts not only how he came to know the two feisty women known as Amanda Ripley and Zula Hendricks, but we finally get a little background info on his past. When she offers him a position as a Colonial Marine he demands to know the name of the moon his encounter happened, but she refuses and they part company. Months later Bowden returns to offer him what he initially asked for, the chance take part in a little recon mission, back where his nightmare began and shows him pictures of the two women who saved his life. He’s going back to return the favour two heroes did for him, back when they saved his life. 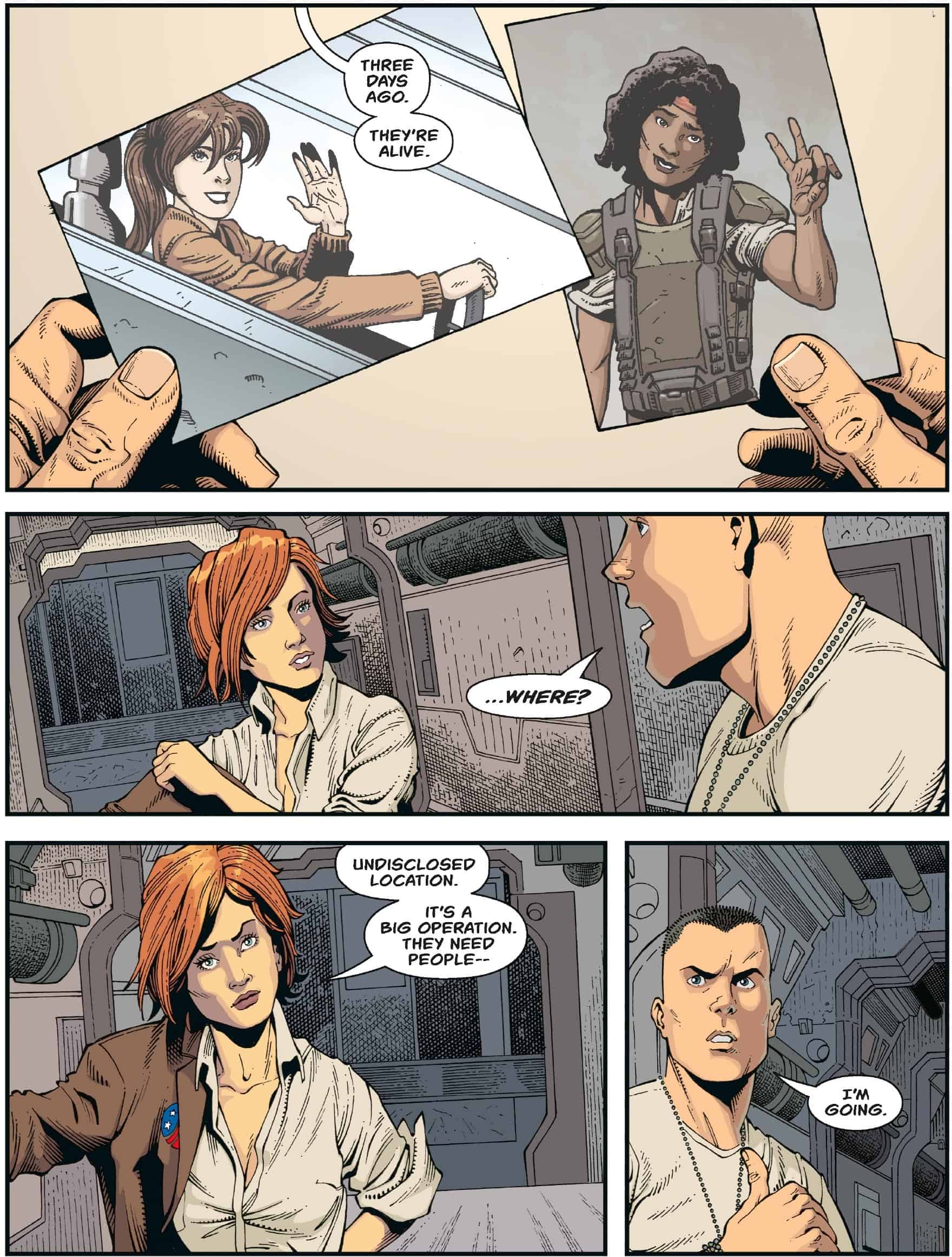 Back in Aliens: Resistance Brand didn’t get much in the way of fleshed out backstory and essentially served as nothing so much as potential collateral damage and the NPC that became the impetus for Hendricks and Ripley’s mission statement. But here Brian Wood cleverly ensures he becomes the central focus in the continuation of the story. And he’s clearly gone through some major changes after his ordeal and he’s grown from the scrawny runt of Resistance into the musclebound military grunt. This is made clear as he towers above Bowden when they meet up, barely even fitting into one panel. He must have been eating that all famous cornbread that is part of the mess hall menu. 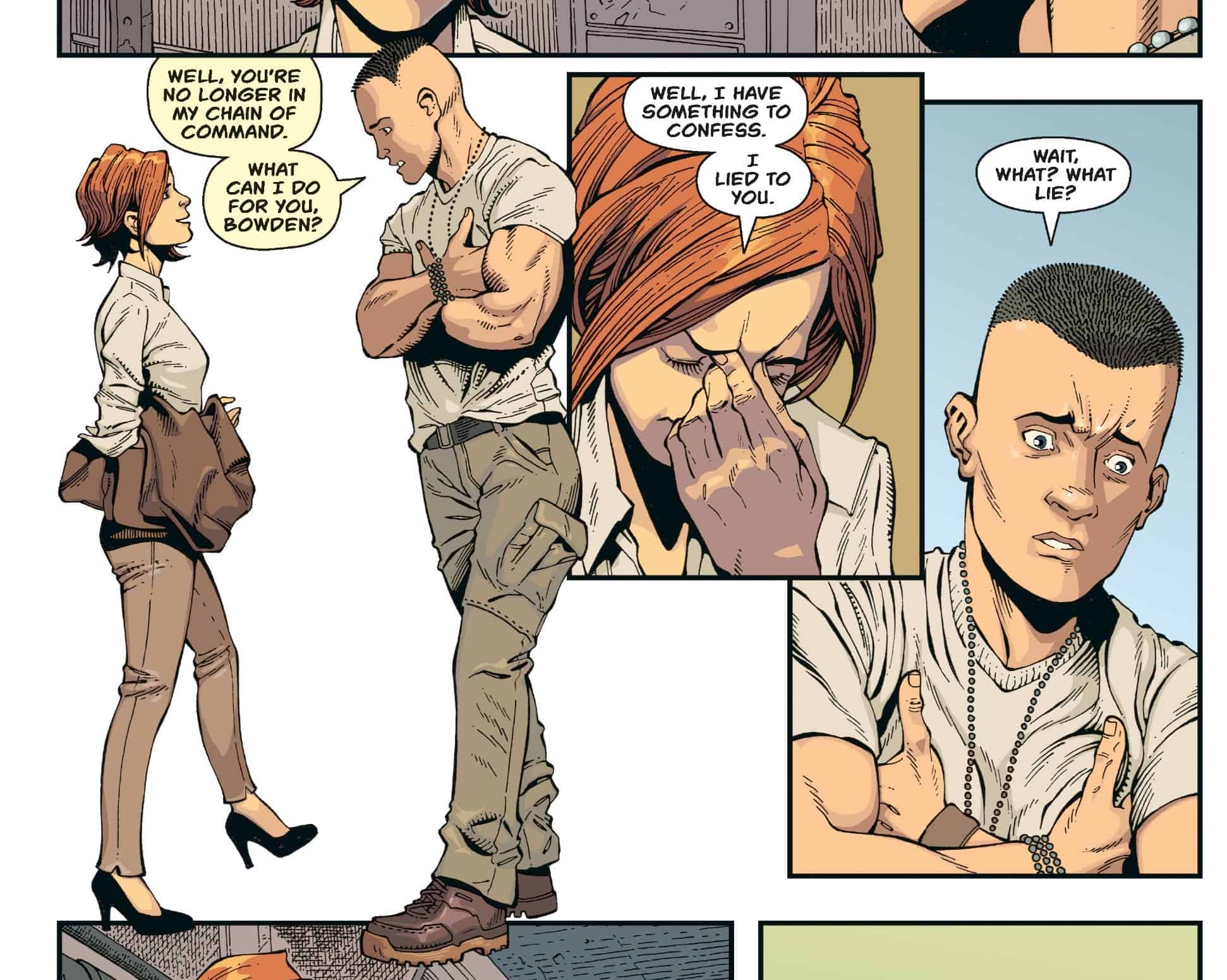 Brian is as practised a veteran of the Aliens franchise as you can find and he has provided many compelling stories within this very familiar Universe, this being no exception. I’m also distinctly reminded of James Cameron’s hit movie Aliens in several respects, which is not a bad thing. The origin of Brand himself is a great way to kick things off, both ensuring we invest in him as a character and bring us back back to the events of Resistance and ensure they are made relevant. It also shows his past has a distinct similarity to another scrappy youth thrust into the nightmare world of the Xenomorph that we all know as Newt. 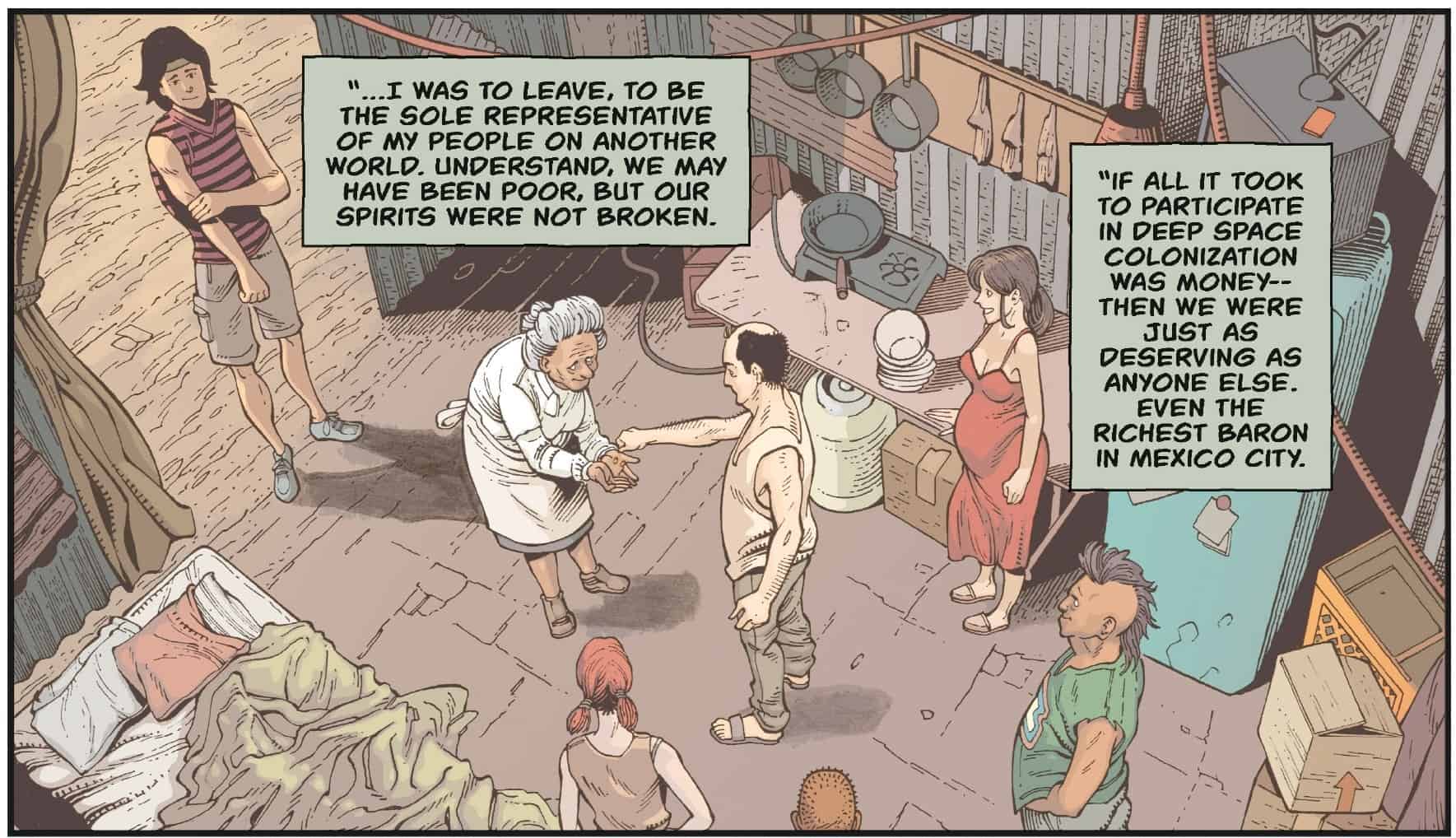 He also grows into the hardened survivor of said brush with death. And much as we have seen with Ellen Ripley his encounter with the Xenomorph also makes him “uniquely qualified” to join the ranks of the elite fighting force that is the Colonial Marines. And as he is sent on a mission to Mars that unearths the memory of his ordeal we see how PTSD takes effect. As he freezes up at the memory and nearly succumbs, before seizing control and taking action , it is an interesting glimpse into his mind that allows us to empathise with him. 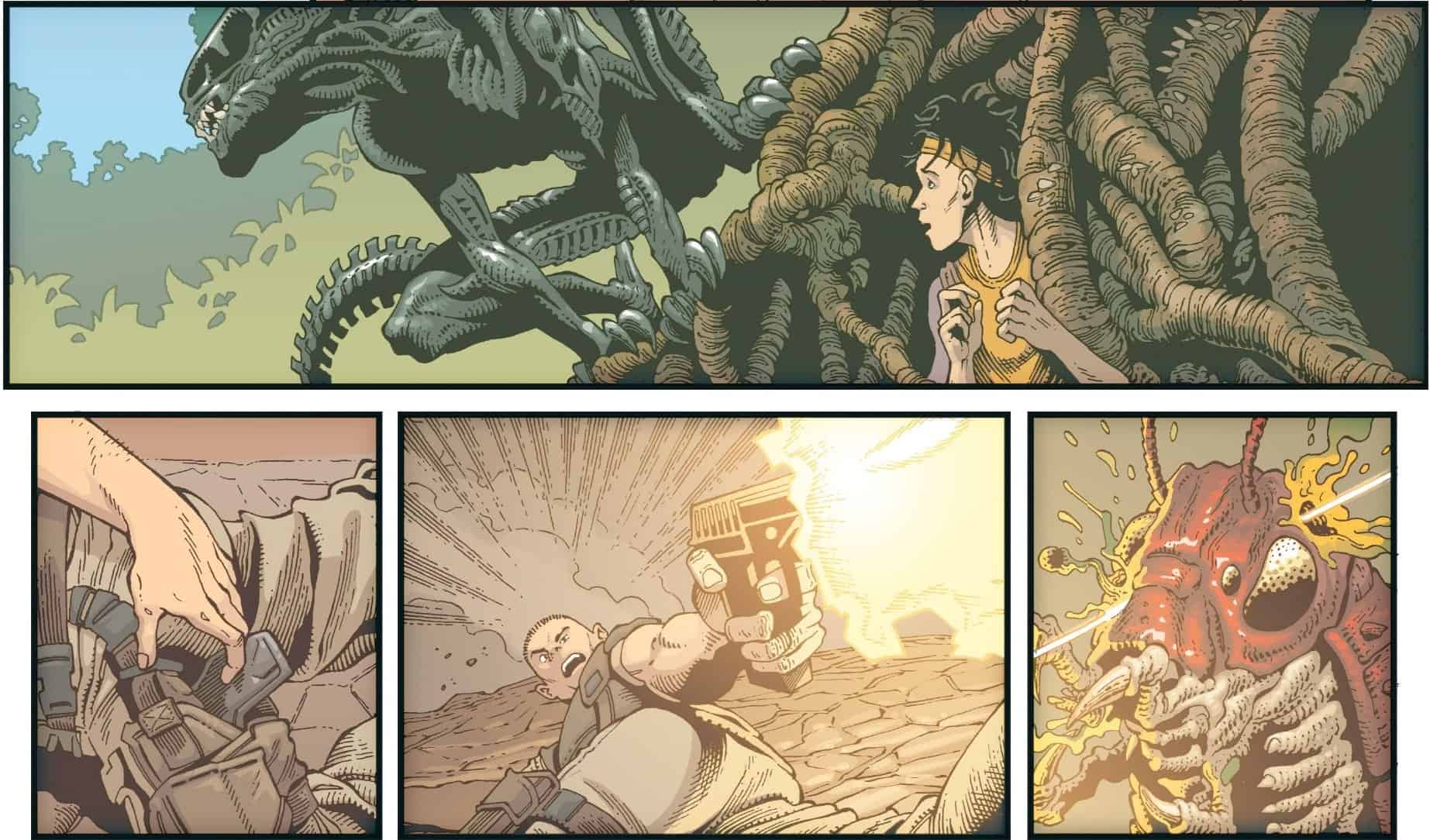 In his initial interactions with Bowden we also see the obedient grunt, hints off the Marine we all know and love in an attitude reminiscent of Hicks. And to top it off we have the suit pulling the strings, set to drag him into the mission we all know he will accept and see him throw himself back into chaos. It’s unclear what her motivation is but I already get the feeling that Bowden has an element of the Burke about her. She seems too nice and casual to be anything less than the insidious face of the Company. I could be wrong and she is set to be another to join the ranks in the fight to destroy the big bad bugs. The answer, whichever it is will be eagerly anticipated. 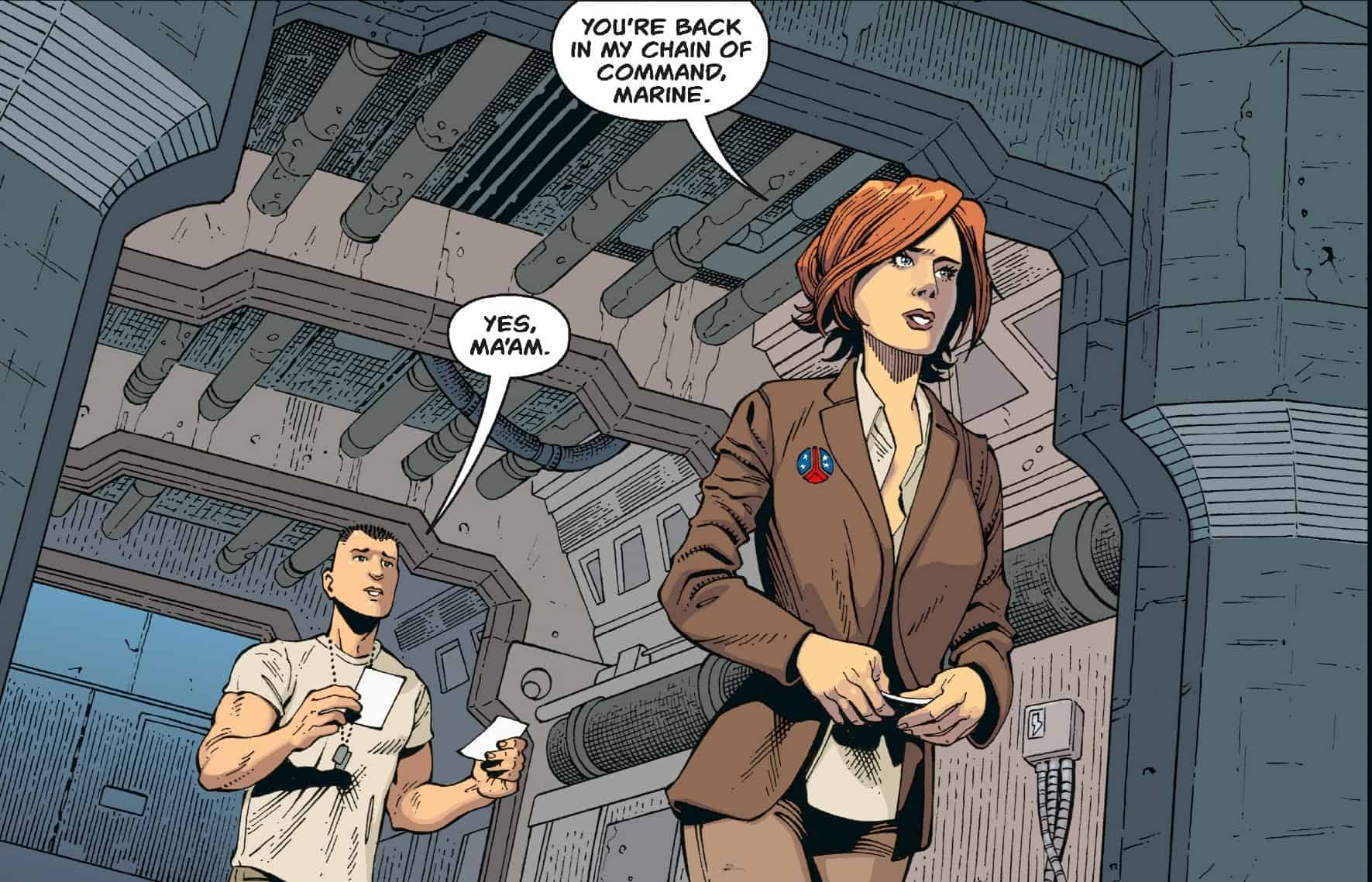 The colors and letters are as always provided by Dan Jackson and Nate Piekos, which adds some reassuring semblance of stability within the series. However, as with the two previous sagas of Aliens Defiance and Aliens: Resistance the art is again changed up and though I was anticipating the return of Robert Carey I thought the introduction of the team of Kieran McKeown and JL Straw was an inspired one. This could potentially be the ideal depiction of the Colonial Marines given this is the artistic team from Halo: Lone Wolf. The gritty Marine set up is as iconic as it is relevant and so needs the correct look, which these guys deliver perfectly. The setting of the space station and land based missions are also perfect in tone. And the panel layout is suited for each scenario. Calm organised sequences for the meeting in the Luna Base camp and frenetic panel within panel sequences of the planet side attacks that draws the eye into the action and ensures the urgency is sincere.

Not to mention injecting tension into the interview between Bowden and Brand, depicting the face off between the two side by side in half panel form. Cleverly giving each character equal page space shows the balance of power is in doubt, as neither is willing to bow down and let the other get their way and shows each is determined enough to spar with the other. And as later she informs him he is back in the chain of command and reminds him she is in charge the continued interaction of these two is clearly going to be one to watch. 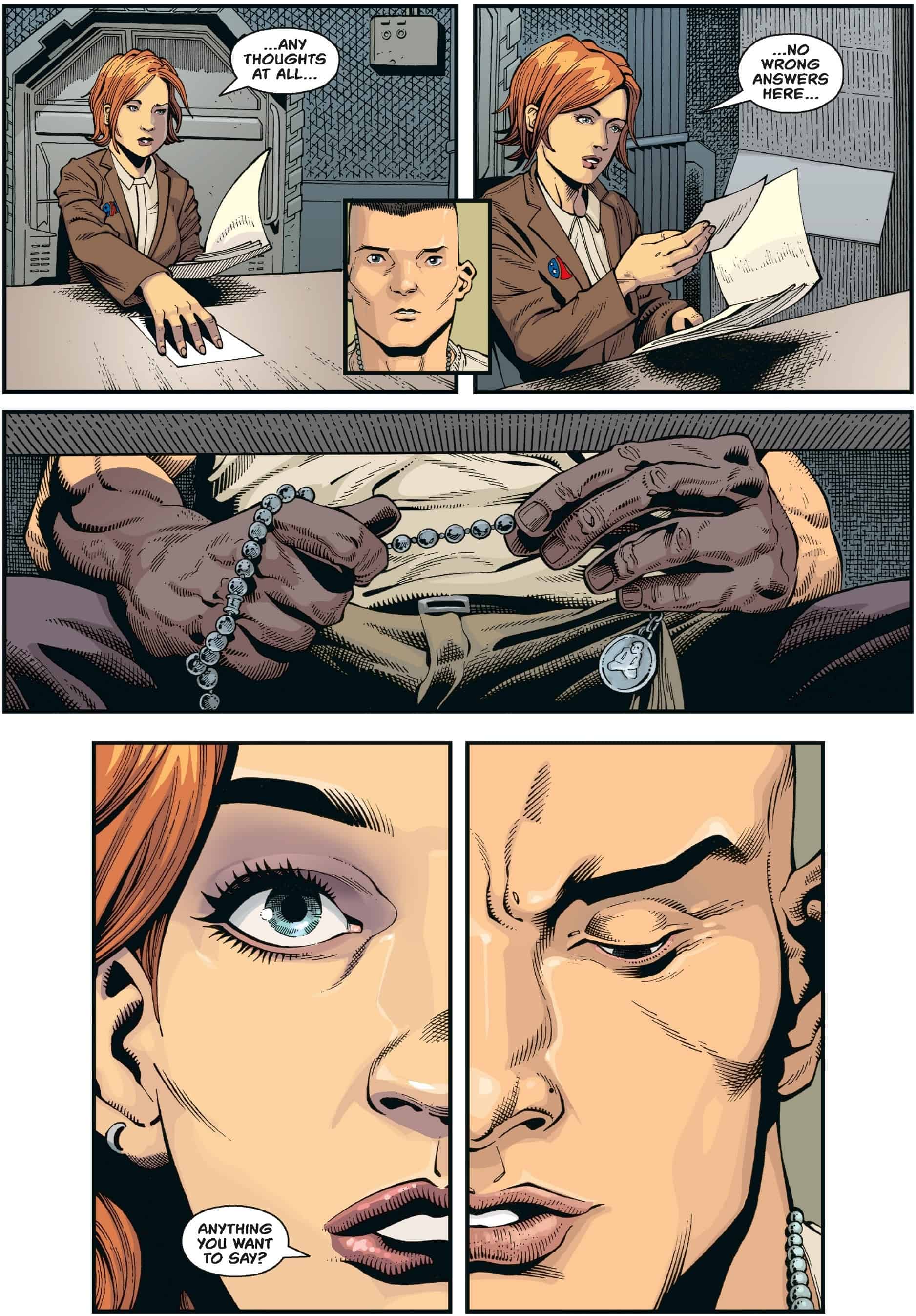 The art and story was also backed up with two stunning covers, both Roberto De La Torre, who has provided main covers for the last series and continues to ensure the dark foreboding mood prevails. And with Mack Chater supplying the equally honorific variant it also keeps the perfect vibe. Bring on the motion sensors. The drama is set to be ramped up and adrenalin rush is eagerly anticipated. The continuation of this story switching to a support cast member could so easily have been distracting. But Brian makes sure Alec is sufficiently interesting enough to become a positively compelling central character and become the full focus of the story. And on top of which we have the intriguing proposition of his being the hero and return the favor that was bestowed on him. The answers to what happened to our plucky heroines has been something I have been waiting for since the end of Resistance and so I cannot wait to see how this evolves and find out how Amanda Ripley and Zula Hendricks survived being stranded on a moon infested with Aliens, before it was nuked from orbit.

Without even seeing the eponymous villain of the story we have opened with a compelling enough reason to return. This series is looking to be just as dynamic and interesting as the last. No small feat.

Aliens: Rescue #1: Survival of the Fittest