Aliens: Rescue #2 Back On The Express Elevator To Hell 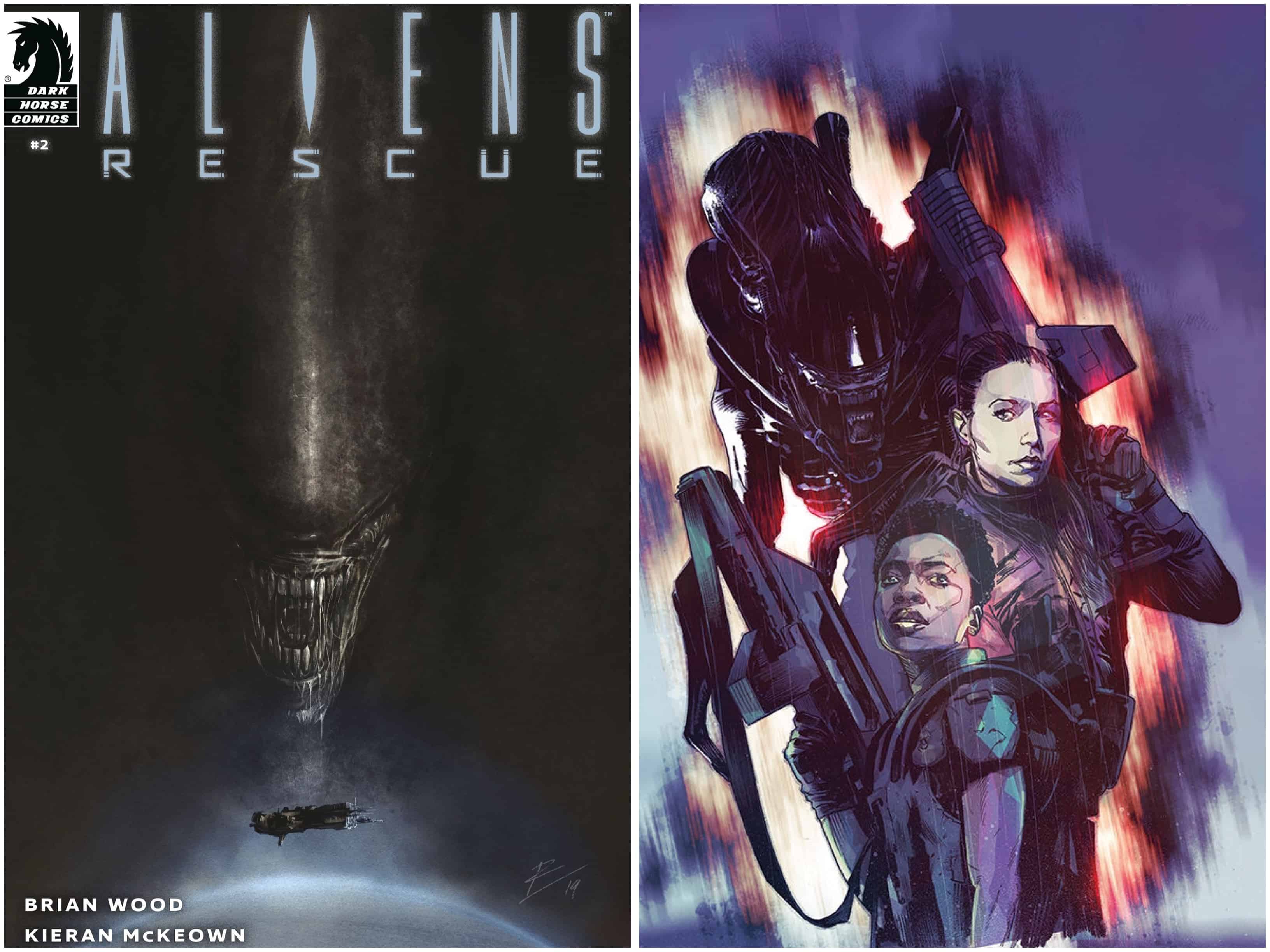 Alec Brand finally comes face to face with his rescuers. And the enemy that plagues his nightmares. As the whole gang reunite (with even Davis in tow) they converge on the earth like planet neighbouring the moon that caused them all so much trauma last time and enacting some serious payback. 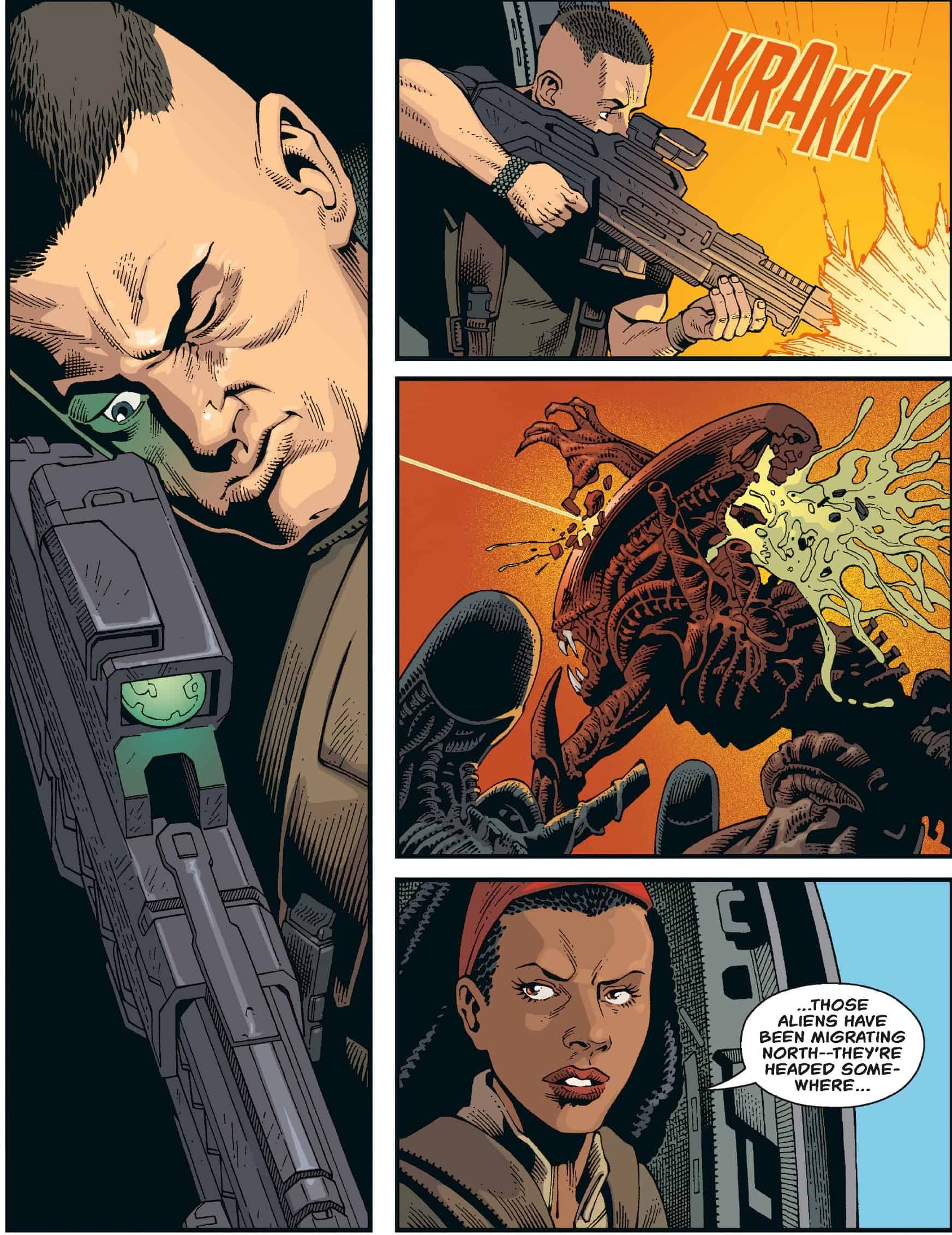 In what should have been a team up to go deal with an infestation and the revelation of the deeper plot of the Company instead had all the trappings of a filler issue. Along with a slight fix in terms of some rather pertinent missing information. There is an indeterminate number of years between Resistance and Rescue that until now was not clarified. So far the only real indicator of any time passing is the growth spurt of Brand. Leading me to believe this was either an editorial oversight, or Alec REALLY dug the cornbread in a big way. Ripley finally reveals the passing of time when she says “half a dozen years” as she explains the fallout of the moon destruction. 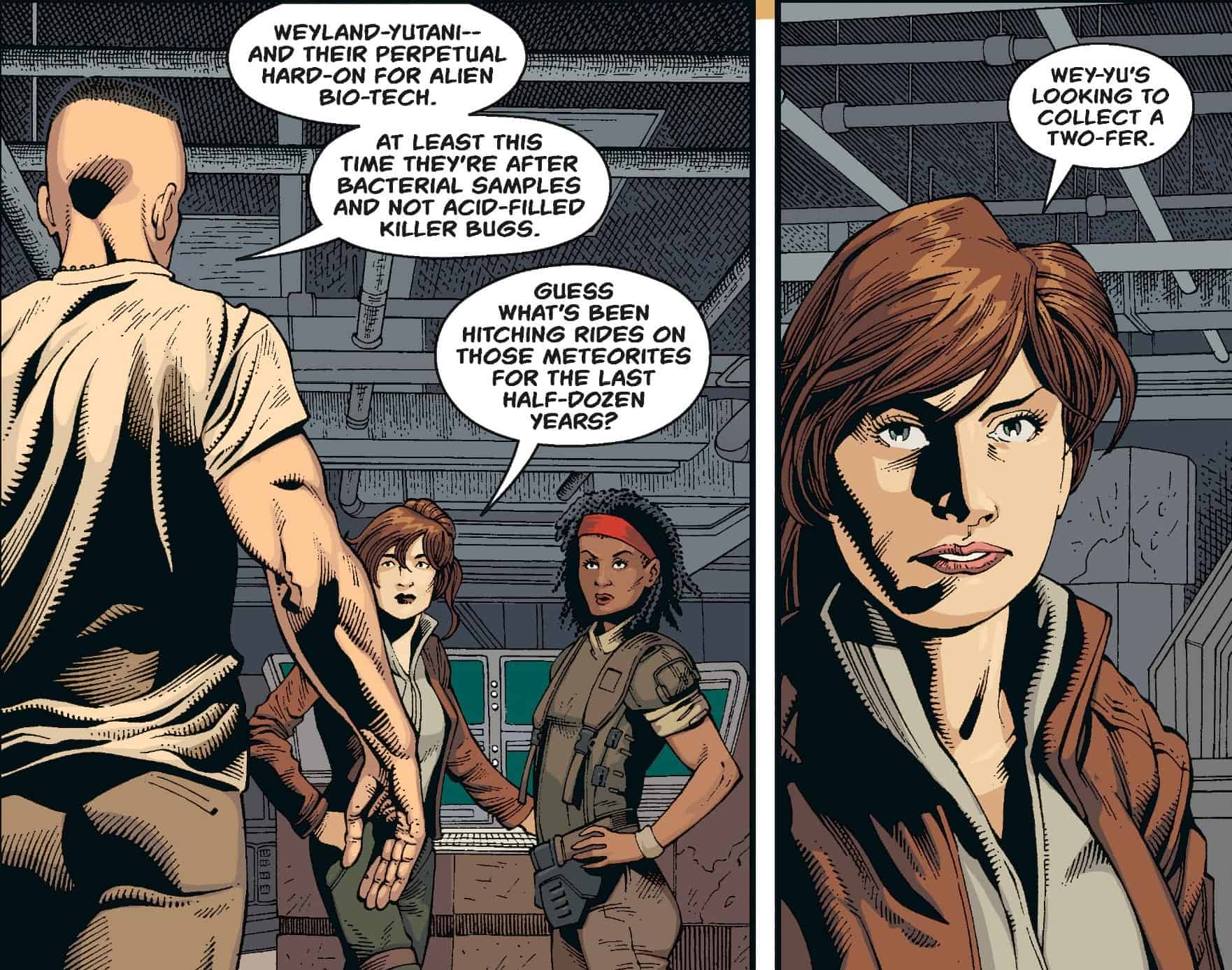 Other than this there is little to state how long has passed between the two series, as even though Alec has visibly aged Amanda and Zula are paradoxically completely without any signs of showing the passage of time. This hiccup aside I read on and tried to ignore the elephant in the room. Then after a brief sitrep that informs both Alec and the reader of Weyland Yutani and it’s double header of a business plan, we are thrust into full fighting mode, as they set off to deal with the Xenomorph once more. What follows is the revelation of where the Alien Xenos are now with a sight that was previously unseen until Resistance and the flocking of the threat in the open. 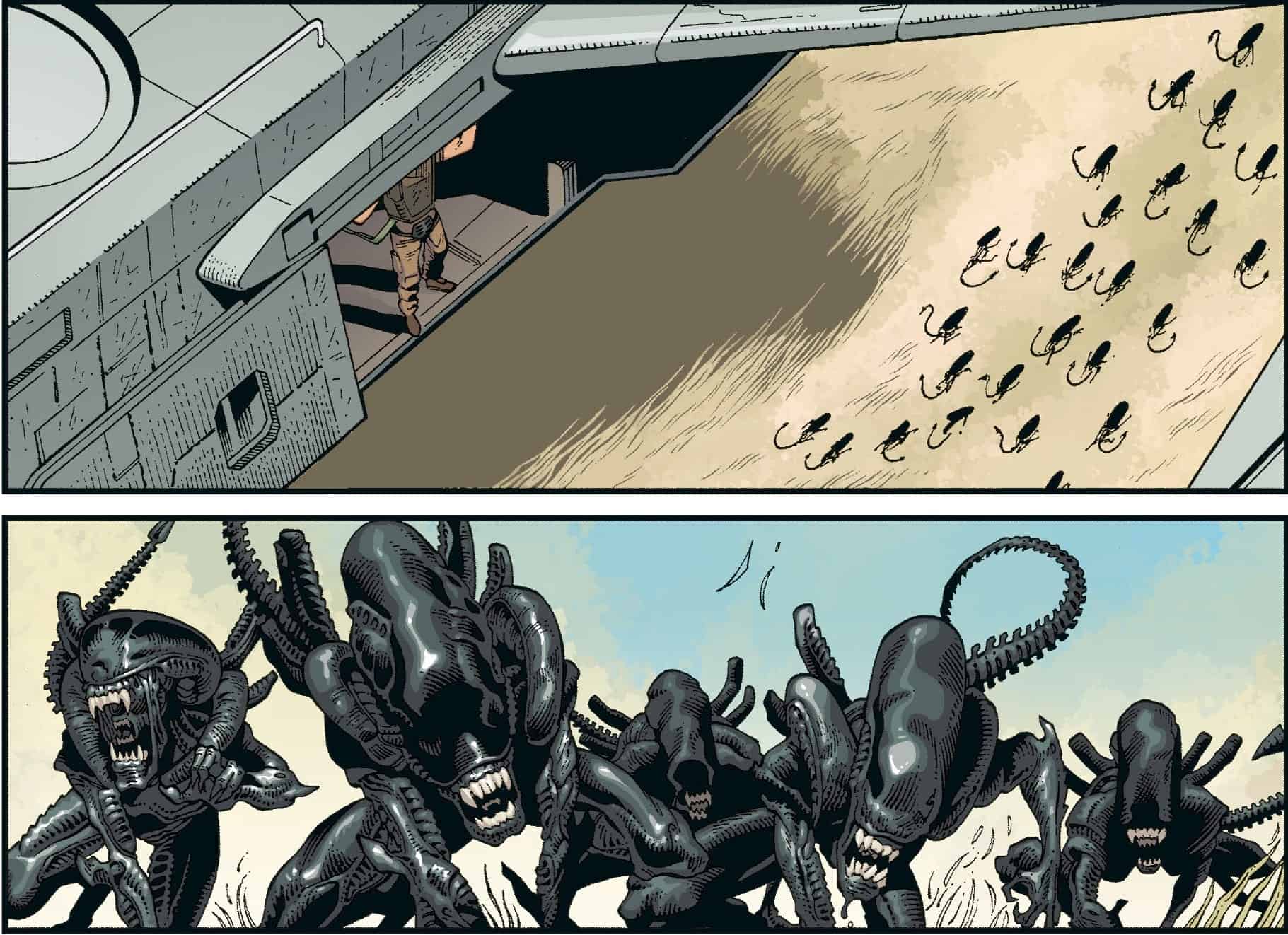 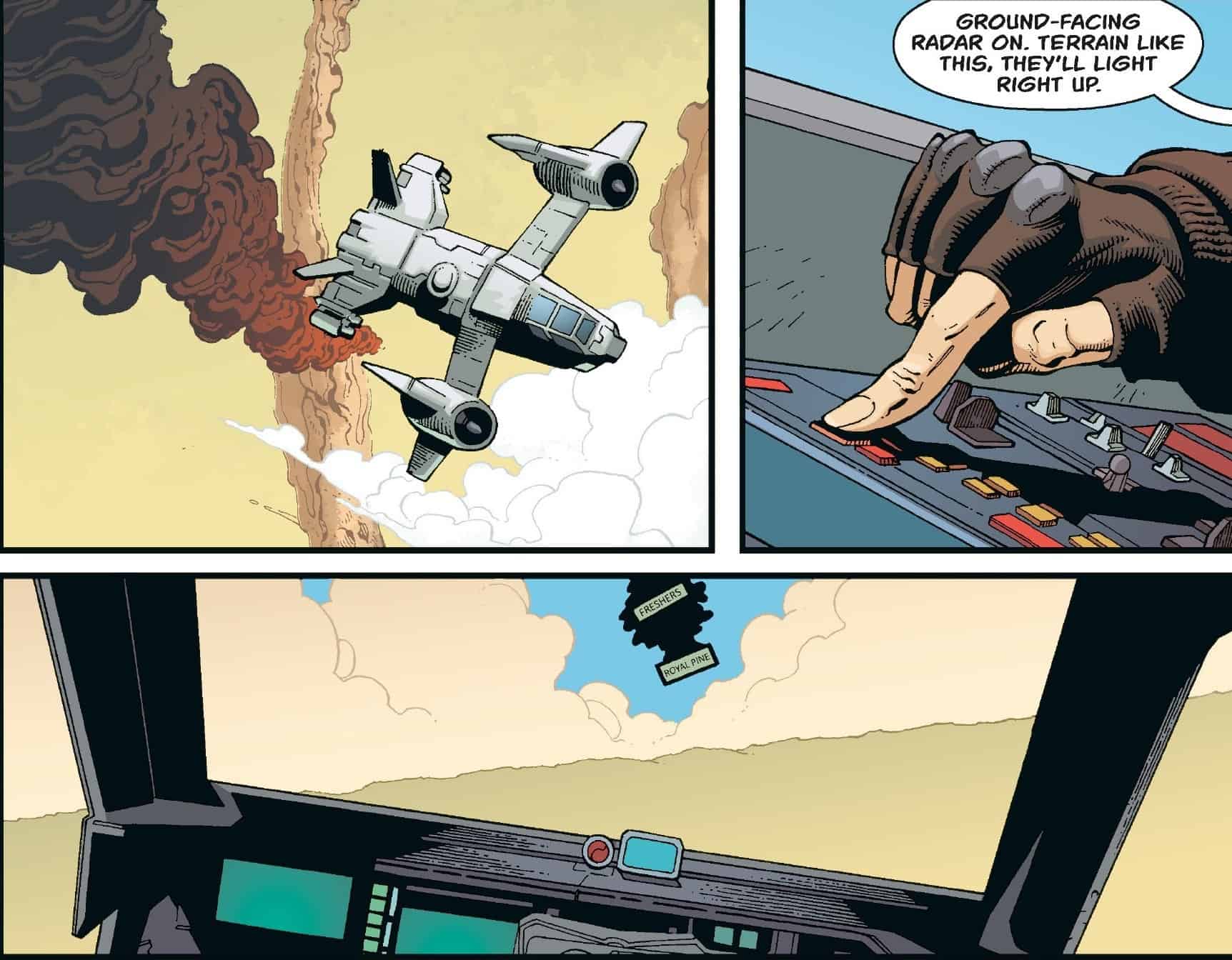 This was an interesting visual, especially when added to other touches like the sight of a Magic Tree car freshener in the dropship and close ups of the equipment as they go into action. Added to the opening sequence and the vast space setting and then honing in on the planet-side action and the minutia of the dropship interior, it’s subtle visual keys like this that add to the authenticity. And when you throw in Amanda in full flight gear looking like Corporal Ferro in Aliens you can see there is some thought going into the imagery and the art team is at least putting in a great performance.

As such the art this issue won me over a little more than the characters and story managed to. Coupled with an atmospheric variant cover from Mack Chater and the main cover by Roberto De La Torre, depicting the ongoing drama perfectly, these were my positive take outs of this issue. As for the writing I had to note there is a little poetry in the speech Alec delivers when going into a ramble about space and how graceless space travel is. And I did also love the snarky humour of Davis and it is good to ‘see’ him back where he belongs. There at least we have some characterisation, and he actually seems the least robotic of all the players in the story. But this doesn’t bode well when the only fleshed out character is the one we can’t even see, as Alec isn’t winning me over at all and the two leads are just wallpaper. 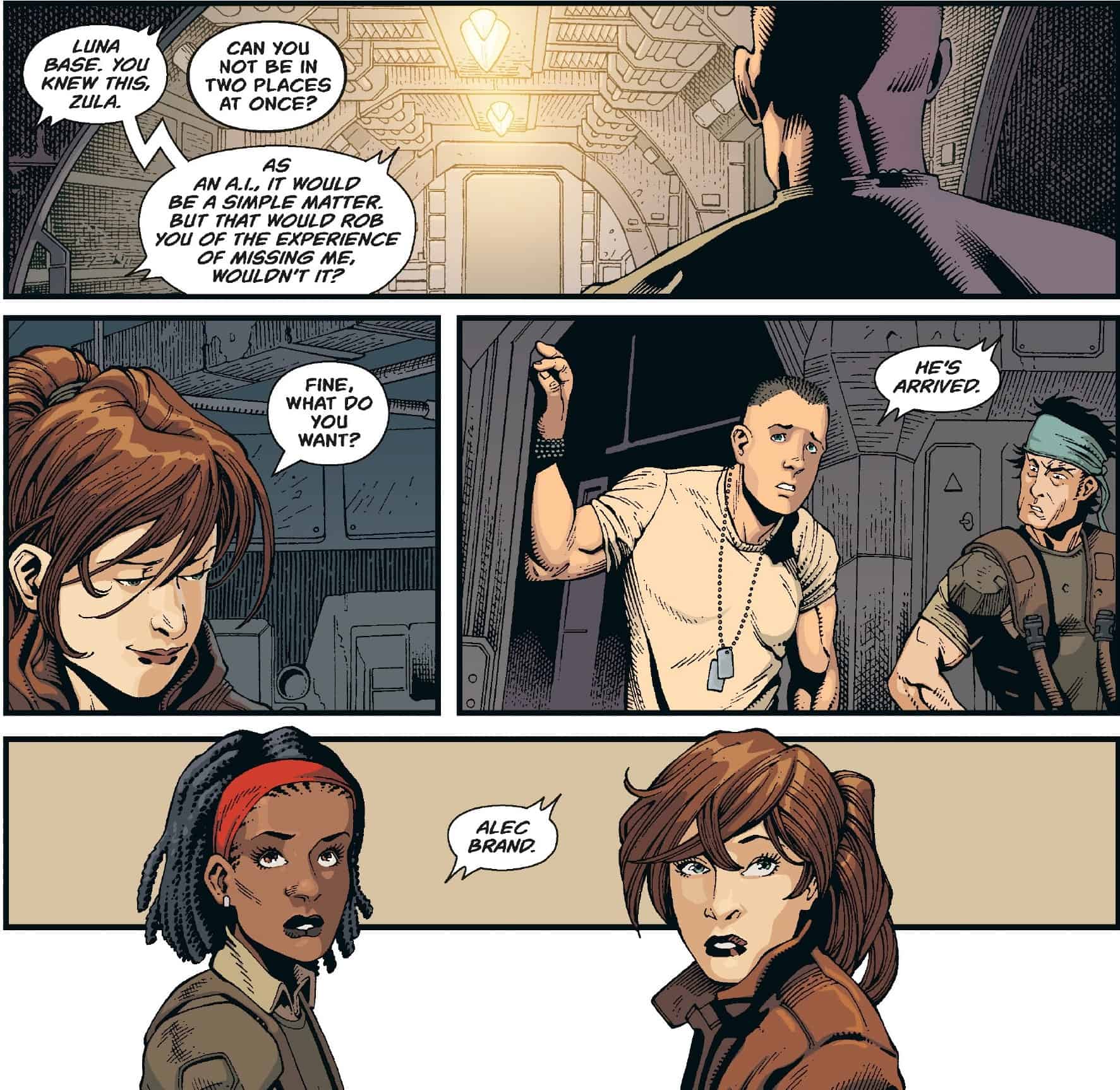 On the whole the issue felt a little like padding, with not much really of any consequence going on, a less than meaningful reunion and very little in the way of dramatic set up. After last issue and the revelation that Ripley and Hendricks were still alive I kind of expected something more in the way of answers and maybe some more motivation and plotting. This leads me to believe there isn’t that much more story to come either. Unless it picks up the pace next issue all I can see happening so far is a minor bughunt of a series with the possibility of Brand joining the team in order to set up another miniseries.

A bit of a let down in terms of follow on from Resistance. I only hope the next couple of issues pick up the pace in terms of plotting and characterisation.

Aliens: Rescue #2 Back On The Express Elevator To Hell