Alec Brand has met his heroes and asks some important questions while they hunt down the migrating Aliens. After Ripley and Hendricks fill him in on what he’s missed and how they escaped, base camp is set up and more questions are raised. This time about the Aliens and just who, or what is controlling them.

Later during Brand’s watch duty Davis informs him they are on the move and flooding caused by the rain is bringing them on a direct path to the camp. As one looks directly at him and does nothing he is intrigued enough to follow them and instructs Davis to wake the others while he follows.

As the story gets underway and we are now past the halfway mark I felt the whole revelation of how Amanda and Zula survived five years ago had been brushed over last issue, and so was now hoping for some sense of revelation and closure in this issue. However as Brand asks his questions and dabbles in a little hero worship I couldn’t help but feel a little cheated. And at first it looked as though we wouldn’t get to find out enough of what happened in the past to Ripley and Zula and then… 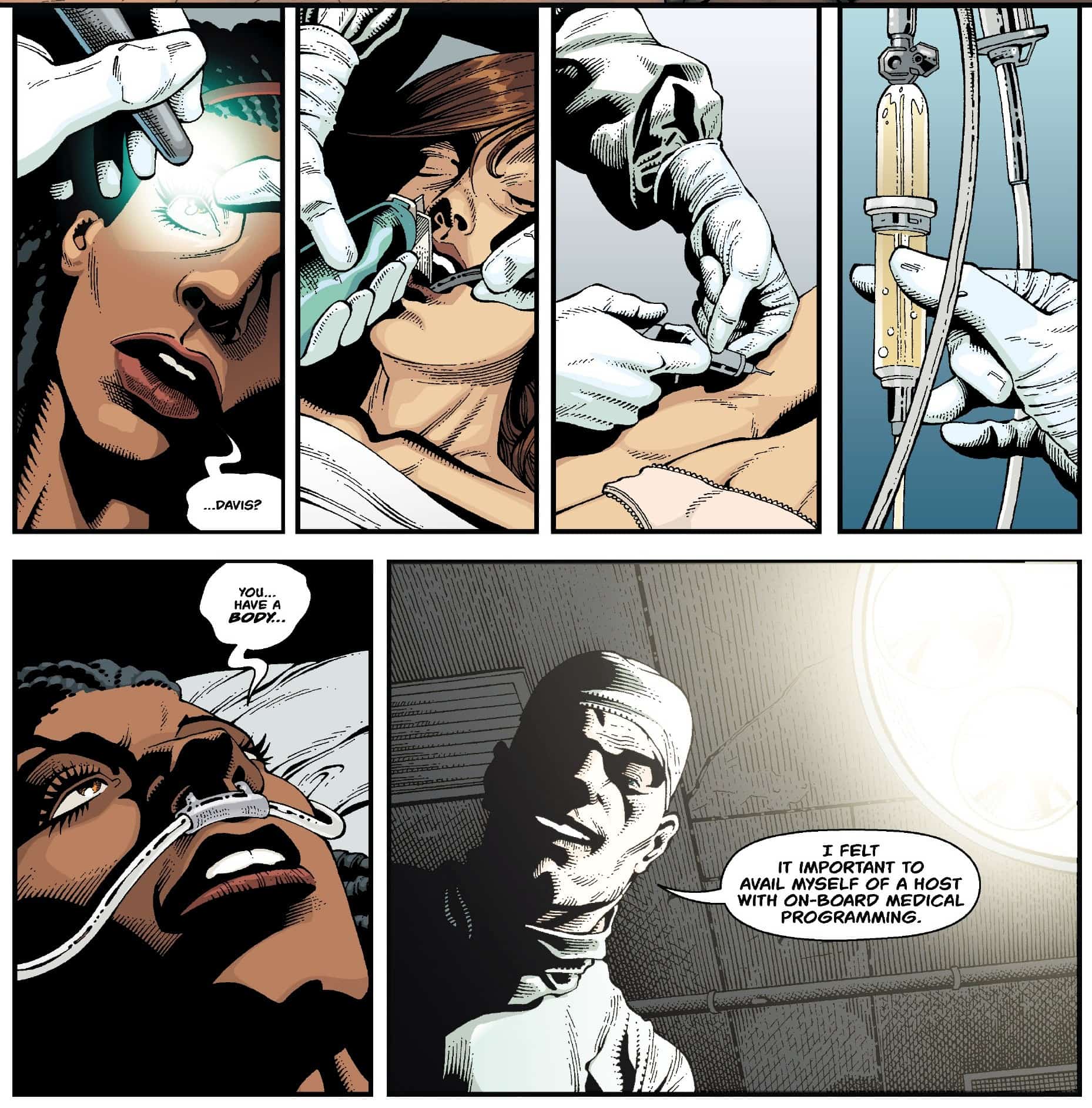 However the interplay between the main characters wasn’t being fleshed out enough for me and too much was being said with no real interaction. There was a lot of information fed to us via exposition during the hike across country while not much actual emotion or characterisation was going on. It was all just ‘explainy much’ and no real drama.

There was the slight intrigue as the crew rest up and discuss what is drawing the xenomorphs, now named by Davis, and the possibility they have been controlled by the Company. But even that wasn’t bringing things alive for me. Over the course of the issue Brian Wood then used flashbacks ad infinitum to explain the backstory, without any use of real storytelling within the narrative. As a result the overall flow suffered, becoming disjointed and had the unfortunate side effect of making me feel disconnected from the current saga, to the extent I was beginning to lose interest in what was supposed to be going on in the here and now.

However the art took on a life of its own and saved things this issue. Right from the opening with the technical specs graphics of the topography, to the shot of Alec stalking the Aliens in the unrelenting rain. Kieran McKeown and JL Straw not only made sure it had all the feel of a real Aliens saga, they also pulled me into the story just in time. Coincidentally enough (or not) this is where the flashbacks end and so does much of the talking, much to my relief. After too much standing around with nothing going on last issue, this was finally what was needed. Dan Jackson also helps in giving the story it’s flavour by keeping the colours of the jungle muted and ensures the mood become more threatening, especially when it begins to rain. And there was even a definite feel of the cinematic with echoes of Covenant….in a good way.

The imagery once again shows that the unfolding events do indeed have more going for them than just an interval or break between action sequences. The scenes alone of the xenomorphs flocking were perfect examples of key ways of keeping the action flowing and ensured it was showing us that there is more going on than just the now irrelevant backstory. Not to mention the ‘herd’ silently slipping through the camp and the great use of perspective from above as everyone slept unaware in their tents. 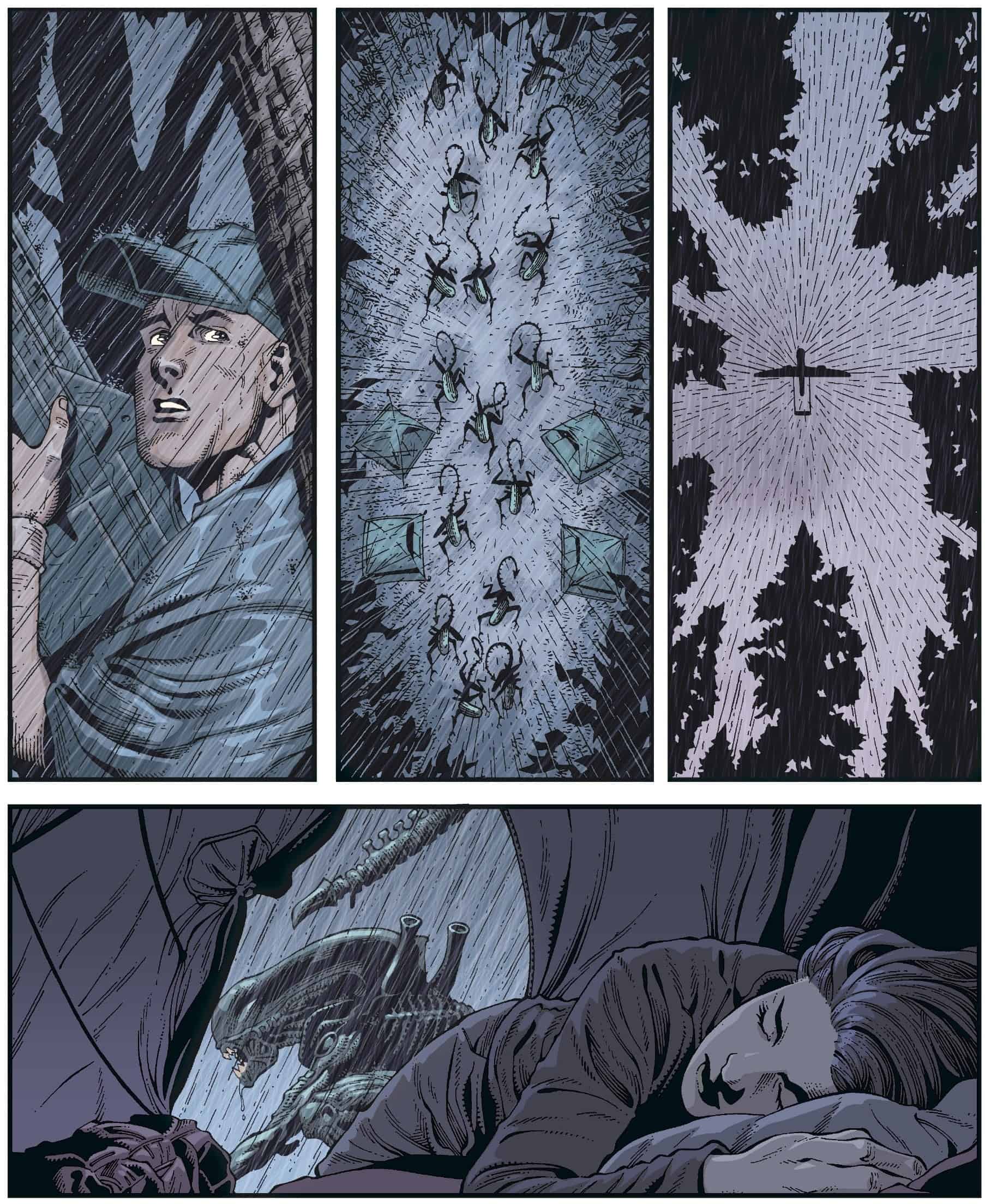 And Nate Piekos helps us hear Davis’ voice with the frequency wobble of static in his speech bubbles. Roberto De La Torre and Mack Chater also reflect the same vibe in their covers, with Mack focusing on the moment Alec makes eye contact with a xenomorph and Roberto giving another splendid specimen of the star of the show. And the promise of what will come is definitely keeping me on board, as we find what Brand is going to discover in time for the finale. My gut feeling is there is a Queen at the end of the pilgrimage, and it could mean that Brand may need a last minute rescue again. Of course if I’m wrong and it’s something else that will maybe lead into a new arc and the next chapter in the story.

With the question of where this is all leading, coupled with the art it is luckily avoiding any impending sense of losing interest in the story. Sadly events involving the real world drama of Brian Wood have denied us the opportunity of seeing this unfold into the promised sequel of the Colonial Marines ongoing story, but I hope that we will at least get a satisfying conclusion to this follow on from Resistance.

The action kicks in just as I was falling asleep, like Hicks on a dropship transport.

Shadow Service #9: What Could Be So Monstrous That it Terrifies a Hell Lord?
June 24, 2021
Recent News & Reviews