The commanding officer of the USMC contingent that includes Amanda Ripley, Alec Brand and Zula Hendricks faces a dressing down as she relates the events of the encounter with the soldiers and something designated ‘classified material’.

What they aren’t openly saying is that the material happens to be a hive full of xenomorphs, including three queens and thousands of eggs. As she evades their questions and manages to walk out of court avoiding any repercussions, we finally discover the result of the expedition itself as the few survivors extricate themselves from the destruction of the hive.

As the group reconnect and reach the hive I finally get the feeling that this is picking up speed. Not only in plotting but also characterisation. In fact when Zula gives a flippant response to Davis I saw the tiniest glimmer of the pessimistic and cynical heroine we all know and love from Aliens Defiance. Which sadly is almost the only bit of personality she’s shown this entire run. In fact both her and Amanda have taken much of a back seat as the new character took the reins, having the unfortunate side effect of forcing them both to become shadows of their former selves.

And I think that might be the problem I’ve had with it all along. Having everything hinge on the perspective of Alec Brand was a big ask for me. Initially as an introduction he may have been the logical choice, but he didn’t interest me enough to become the impetus of the story. An unknown quantity who originally played a very minor part of the last series, he wasn’t really the brightest star for Brian Wood to hitch a wagon to. Zula or Ripley were by far the better options in my humble opinion, being the perfectly well established believably strong characters they were. And this was the least of my concerns with him. Particularity as he was forcibly transformed from the meek and mild refugee of Resistance to the meek and mild meathead we now see, who apparently has to come up with all the solutions and ideas. As well as the fact he still seems so blissfully unaware of the origin of the creature, despite being hip deep in them in Aliens: Resistance and having witnessed them chest-bursting first hand. 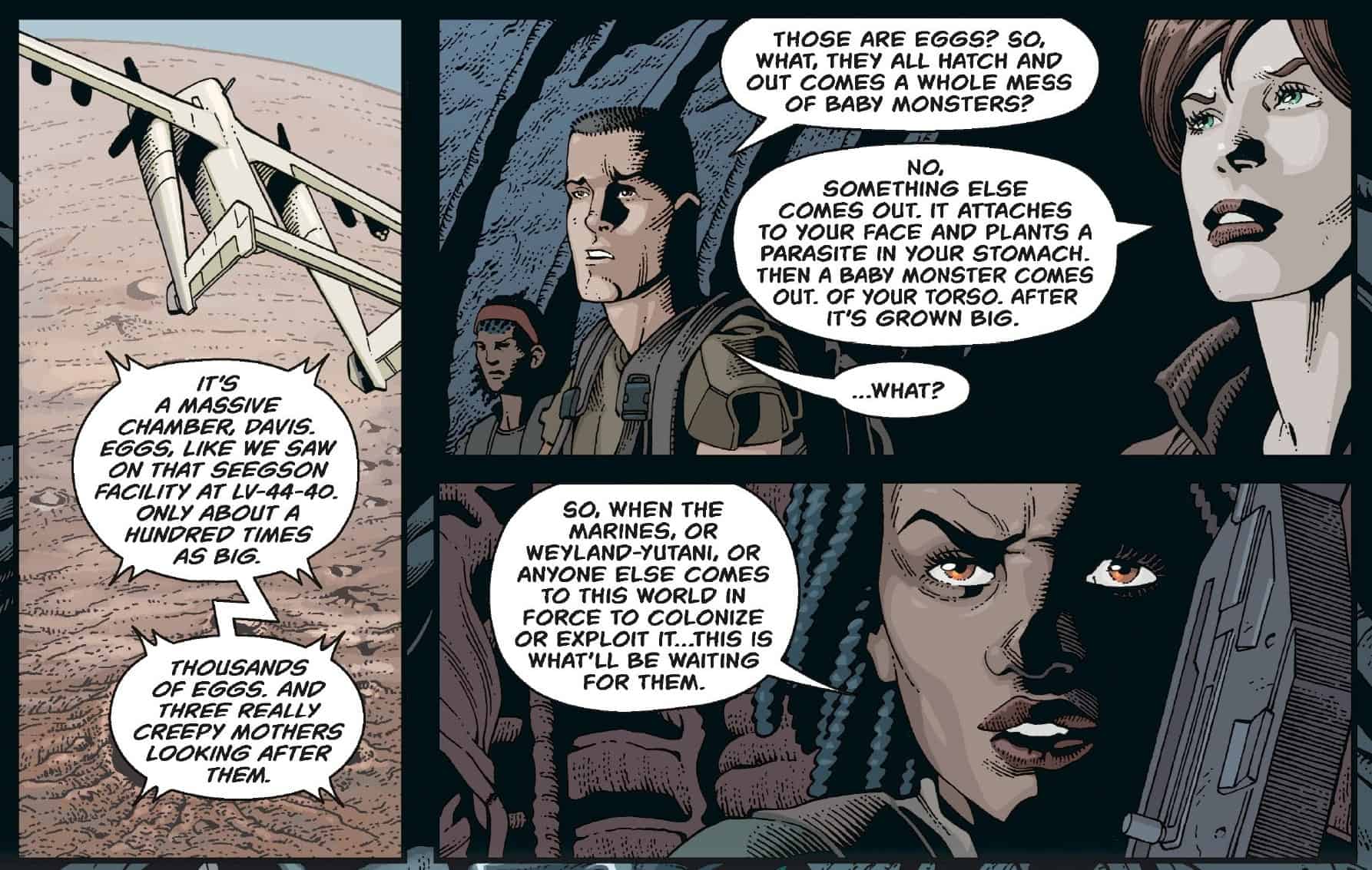 But what it lacked in character development it made up for in action and interpretation of both art and storytelling. There was also some saving grace in the full on claustrophobia of the trek to the inner sanctum. All of which was vital in setting up the feeling of peril when trying to get back out again later on. Not to mention the reveal of the three Queens (one I expected but not three) which went some way to make up for the lack of action in the previous three issues. And I did enjoy the switch back and forth from the drama in the hive as events ramped up the Adrenalin, to the courtroom drama that book-ended it. The truth that wasn’t being told in court kept you guessing as to the result right up to the end. You could almost say the two narratives were being played out in perfect parallel to each other, even though one was informing the other, which was a clever use of perspective.

First seeing Lena Bowden face the judges in the hearing as she introduces us to the Marines while they face off against their own threat of the Aliens. The panel of inquisitors looming over Bowden is also echoed in the scene as the Marines discover the threat of the Queens. And then again as she walks away free of reprisal, certain in her victory with a grin, so do the remaining heroes crawl out of the rubble.

And of course the Roberto De La Torre cover was just as evocative as those previously seen, showing the Queens in all their gory glory. And Mack Chater also gave the perfect variant cover, with a poignant image of the Colonial Marines in a more reflective pose, reminiscent of the haunting images of Vietnam soldiers in the calm moments between firefights. While the art within the book was not as polished and ‘movie classic’ as Aliens: Resistance I totally appreciate it here in this series. Kieran McKeown and JL Straw went full out to give us the rough and ready kinetic energy needed to carry the story through. And the colours of Dan Jackson also inject much needed life into the events. The pulse rifle explosions were full of energy and the threat of the Alien was ever present, once we finally got to see them in action that is.

And action there was. Though it took three and a half issues to get here the slaughter was full on and the only let-down was that apart from the three main leads we didn’t really get the chance to care who lived and died, as we weren’t shown much of who they were to begin with. At least the facial expressions showed a grim determination and desperation that worked in favour of the characterisation and informed the danger they faced. And here was the titles strength overall. The depiction of the trek across the wilderness last issue and this closing act spoke volumes about how to build the threat level for a great finale.

Just a thought but…maybe the story should have started here to begin with? It’s also no secret that this title was intended as lead into an ongoing Colonial Marines title, but it could maybe have been used to strengthen the link created in Aliens: Resistance between the lead female characters, both from two separate titles within the Aliens franchise. Instead it served only to nerf them this time round in favour of the Milquetoast Alec Brand. As such I feel this set up has slightly undone some of the hard work laid out by Brian Wood in his previous outings, with his building up of the intrinsically strong female characters at the heart of the story. One the daughter of the original bughunter and sole survivor of Alien Isolation, the other the last remaining living complication for Weyland Yutani from the Aliens: Defiance comic. As such this affected my overall writing score, which would have been considerably higher if only the main character wasn’t who we got.

A slow start but delivered a satisfyingly explosive ending, which held true to the ethos of the overall franchise. Despite the introduction of the forgettable male lead.