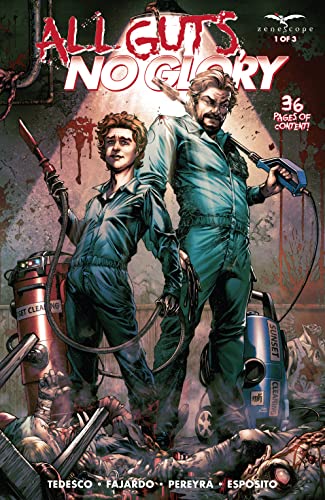 Monster hunting is tough, the danger, the glory, the mess.  Who cleans up after the fight?  Meet Craig and Jimmy, they are the mop up squad but this time they find more than they were expecting.

All Guts, No Glory is an unusual Zenescope title. Where most of the stories revolve around myth and folklore, this one focuses on the unsexy job of cleanup. Sure, it is cleanup of supernatural battles involving zombies, werewolves, and vampires among others. Where most stories focus on the hunters as the heroes, this one places the hunters in a more villainous role. The central theme of the story is the rescue of a young woman who was bitten by a vampire but still is in the early stages of her own transformation. Instead of hunting her, Craig and Jimmy, the true heroes of the story, fight to save her and reverse the process. There is a terrific twist in the end when all the characters are assembled in the climax that I did not see coming.

This story is also a fun melding of different genres. On one hand it is a horror action story where the protagonists and antagonists fight creatures but it also contains elements of humor. There are several times where the action just gets funny and I always like a mixture of my reading emotions.

The art is terrific. It is somewhat realistic but definitely has a cartoony feel to it. The cartoony elements are much more noticeable in the violent panels. The deaths of the zombies and vampires have a definite over-the-top element that makes the subject matter almost laughable as these creatures and monsters are dying in the most gruesome ways. There are also wonderful callbacks to the more standard Zenescope fare. Most notably is the cameo of a Robyn Hood costume that definitely places this story in the Zenescope universe.

This is a fun story.  I really liked the characters here and I hope to see them again in more adventures.