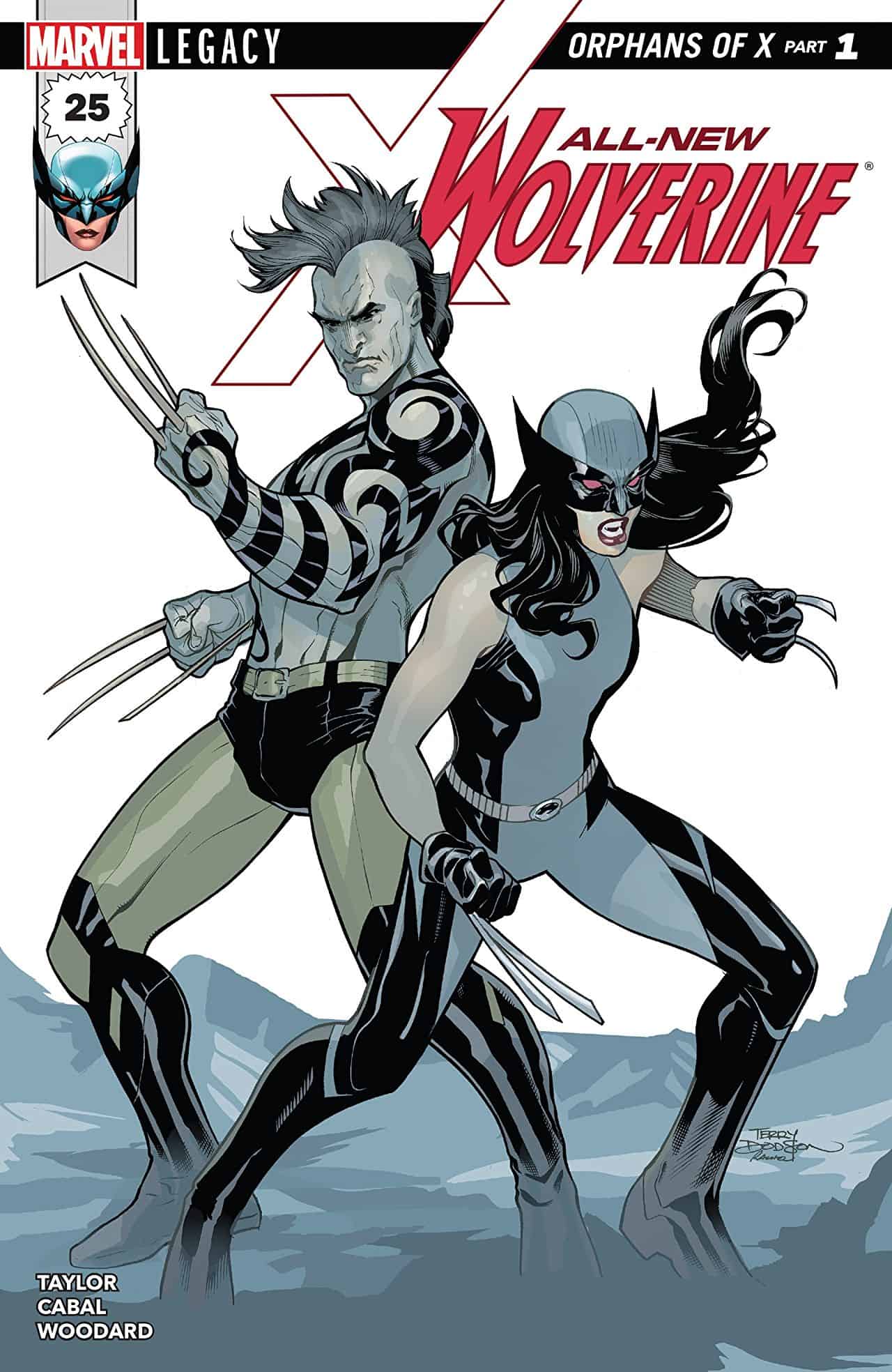 What does the Legacy event have in store for our All-New Wolverine? Daken, Logan’s son is kidnapped and it’s up to Laura Kinney, Logan’s clone to track him down. But, it looks like the men behind Daken’s disappearance are targeting Laura too. The stake is high for the Children of Logan, enter the Orphans of X!

Previously: With the help of the Guardian of the Galaxy, All-New Wolverine, Gabby, and Jonathan the Wolverine finally destroys the Brood Infested Moon (of another Planet) and saves a community of Scientists in space. Wolverine found the alien scientist behind the virus that infected and almost killed everyone in Roosevelt Island back on Earth. Rocket Raccoon punished the scientist behind the incident and after serving justice, Wolverine & Gabby with Jonathan decided to go back home to Earth from Space.

What You’ll Find Out: The story kicks off with a flashback, we see Logan facing Muramasa (as how it was depicted in Wolverine Vol 3 #40), but this time around we get to see what was happening behind the scene. It was focused on a blue shield being hidden by Muramasa, with an indication that Logan will one day use it to protect not only himself but also his family. After that brief flashback, we see Daken in a bar having a few drinks. He was then interrupted by one of the locals who offered another drink and a toast as thanksgiving for saving the civilians from the infection that spread out in Roosevelt Island. Daken senses that this was a set-up and informs the crowd that he is not falling for whatever they were planning. Everyone at the bar then attacked and tried to capture Daken, who was able to fight back. The barmaid then managed to capture him using an electrified net gun, revealing to him that they are a group called the Orphans of X and that Daken deserved what was coming to him. The group fled the site leaving Daken behind. He then hears a jet plane diving. We then see the jet releasing a missile hitting the site where Daken is currently trapped.

We then see Laura and Gabby in their new apartment in Roosevelt Island, discussing Gabby’s idea of having a superhero name. Their discussion was then interrupted by an incoming call. Later, we see Wolverine and Gabby with Officer Thompson who was reporting and showing them, a severed arm hanging above. The severed arm was confirmed to belong to Daken. Attached on one of Daken’s claws, Wolverine found a note with an “X” mark on it. When she used her heightened sense of smell on the note, she then noticed an unexpected and familiar smell. It was the smell of the Facility where she was created and turned into a weapon. She doesn’t mention it to both officer Thompson and Gabby but does inform them that she might know the people interested in harming Daken. She thanked officer Thompson for the call and informs her that she and Gabby will give their statement in the morning. Later that evening, Laura visited a sleeping Gabby in her room and told Jonathan the wolverine to look after her while she is away. 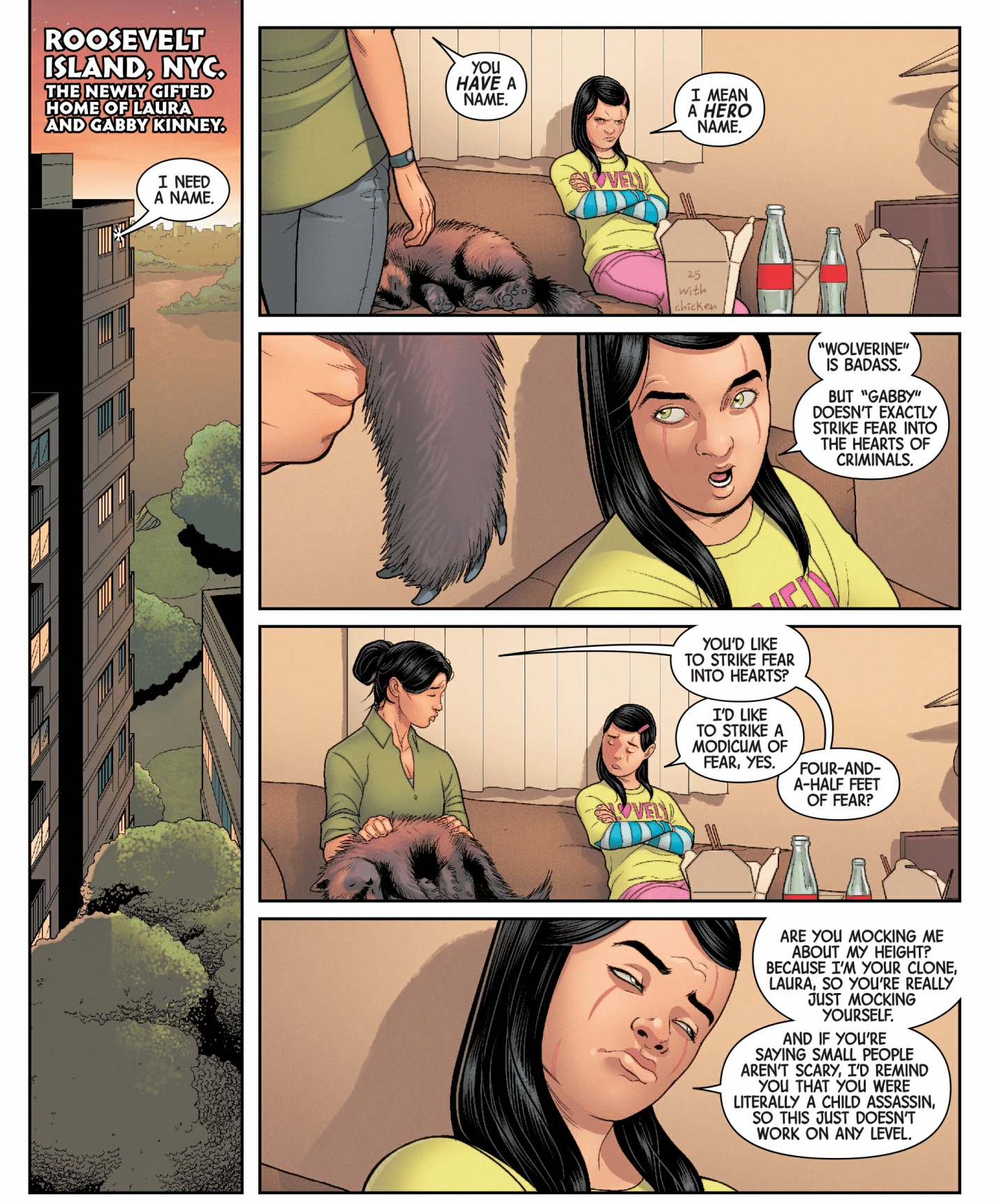 At dawn, we see the time-displaced, teen Warren Worthington III and Wolverine (I am not sure if they are still in a relationship, but they tease each other like there’s still something between them) riding on one of Warren’s private helicopter. She tells Warren she needed the helicopter in hopes that they’ll be able to come back with someone she is looking for. Warren tells her that he doesn’t even know where they were landing. Wolverine tells him that it was the place where she was created and trained to become a killer. The facility where she killed her mother. 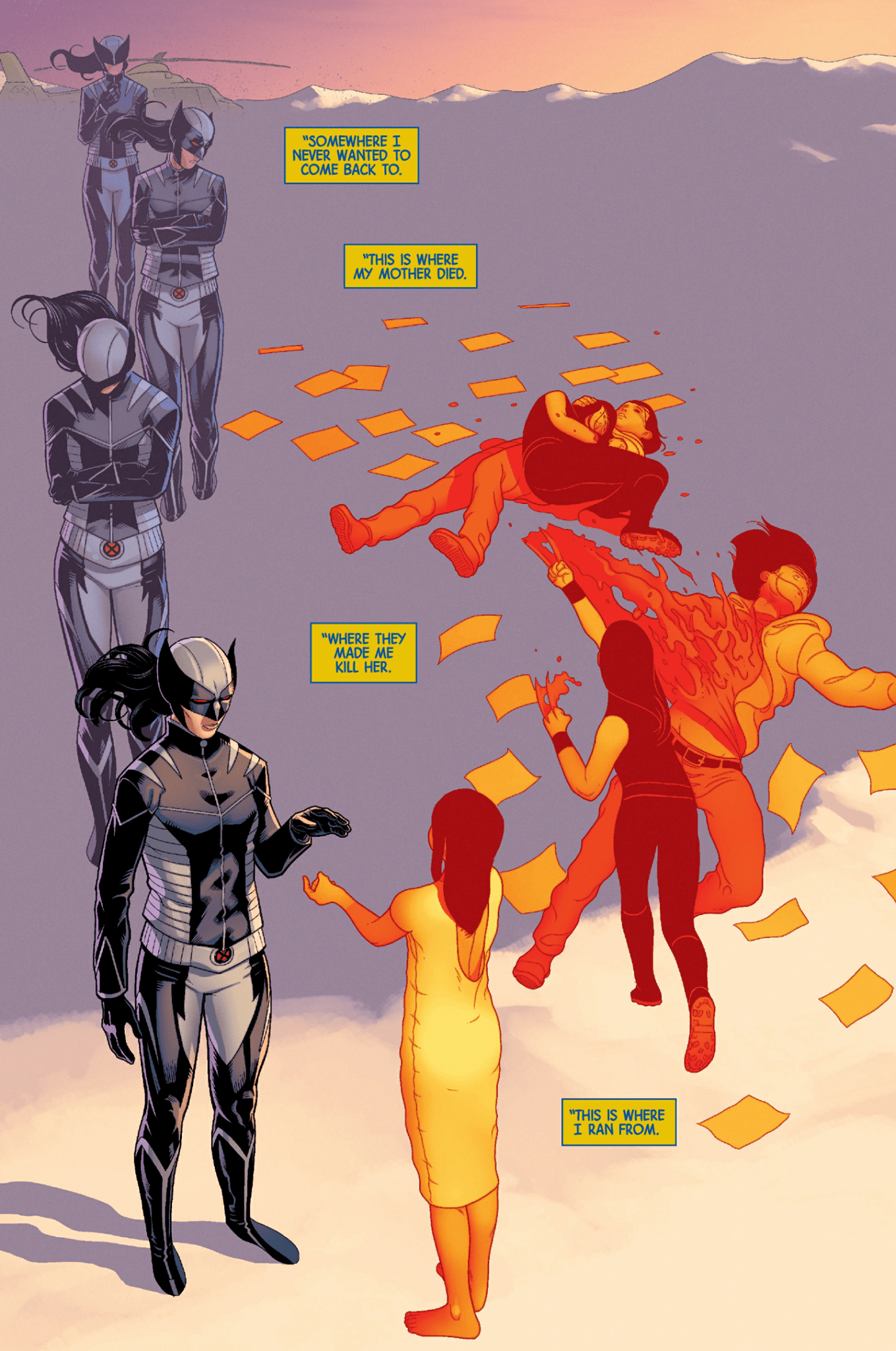 Inside that facility, she then tried to find and locate anything that might give clues to Daken’s disappearance and at the same time look back on the horrible memories she had before she escaped the facility. She then heard a disturbing sound and followed where it came from. She then found a tube with a human inside it. Hoping it was Daken inside it, she breaks the tube to set the person inside it free. To her surprise, that person was not Daken but her mother, Sarah Kinney who was assumed dead but is now revealed to be alive. 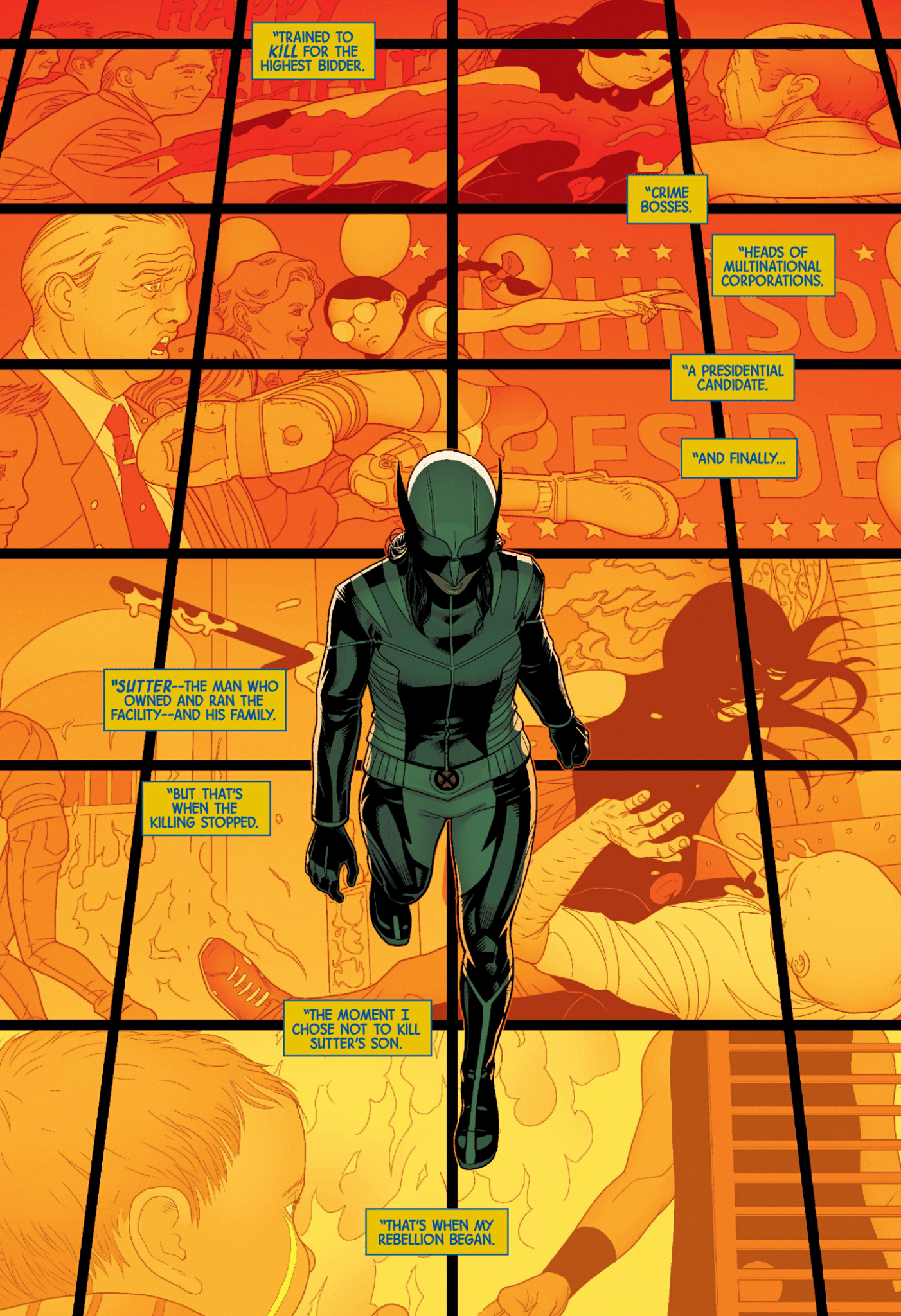 A lot of things to take-in with this issue. First was the flashback at the beginning makes you wonder how all of this will connect with other Logan related books. I have a feeling the Masamune (the sword) being shown during that flashback has some connection with the newly announced Old Man Logan antagonist; Scarlet Samurai. It was really fun seeing Daken in action at the start of the book and it was also awesome how the artist, Juann Cabal’s art manages to capture the scene pretty well. As always, I enjoy reading those moments with Gabby. I find it really fun when she was discussing to Laura her ideas of having a superhero codename. Another good thing I like is seeing the time-displaced, teen Warren again. I always wondered if they ever broke up after her time with the All-New X-Men team. There were no hints about their relationship status in this book. However, the brief teasing they’ve shown during the helicopter scene implied that they might have cooled off their relationship but are still interested in each other. The only issue I had with the issue is Luara having to go through her horrible past again. I know the past will always her, but she’s has grown a lot since her closure and development back in the “Enemy of the State 2” arc. It gets a bit tiring to have her look back at it again as her weakness just to serve as a plot device. But all in all, I really enjoyed this issue. It is definitely one of the best titles under the on-going Marvel Legacy run.

Final Thought: Taylor delivered another winning issue. He knows how to start a story arc with a bang, or should I say with a Snikt! Cabal’s art style is one of the best I’ve seen so far, and it fits perfectly for All-New Wolverine. Match this two-talented individual and we have what I call another epic story.