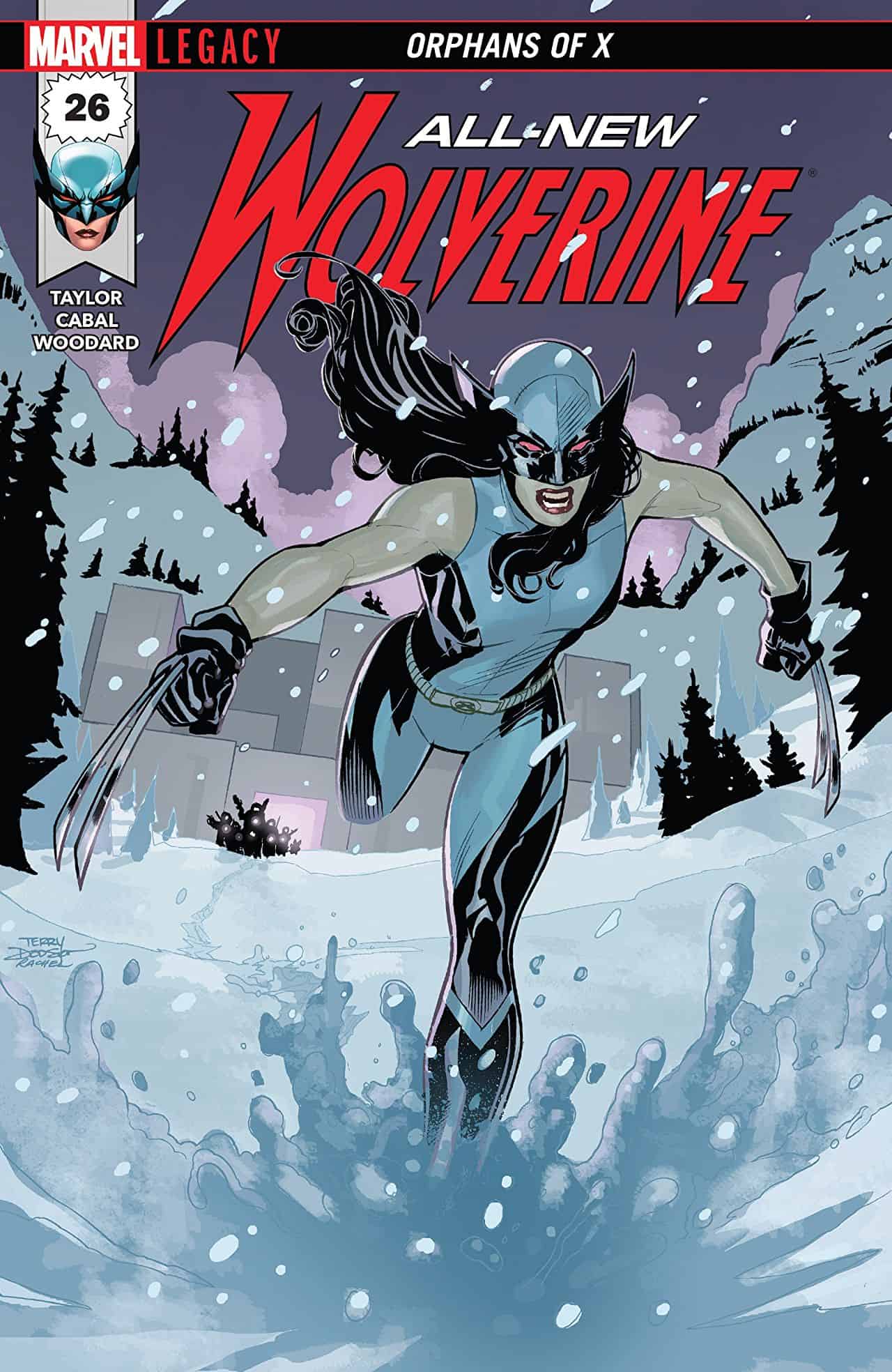 Laura finds her mother, Sarah Kinney alive after years of believing she was dead. Daken is still missing and is nowhere to be found. Looks like the mysterious group, the Orphans of X has bigger plans for the Children of Logan.

Previously: Daken was attacked by a mysterious group called the Orphans of X and went missing. Officer Thompson called Laura and showed her Daken’s severed arm with a note smelling like a facility where Laura was created. With the help of her former boyfriend, the time-displaced teen Warren Worthington III, Laura searched for Daken inside that facility. Just when she thought she finally found Daken. She unexpectedly found someone else from her past. It was her supposedly dead mother, Sarah Kinney who was actually alive inside one of the facility’s tube.

What You’ll Find Out: We find two Orphans of X members talking in front of Daken who is lying on top of an operating table. One, who is named Lisa asked forgiveness from his partner and left. The man left behind then took over. He shared Lisa’s personal information and expressed his anger towards Daken while he continued to dissect and experiment on Daken. Daken wakes up, kills the man and manages to get off from the operating table. 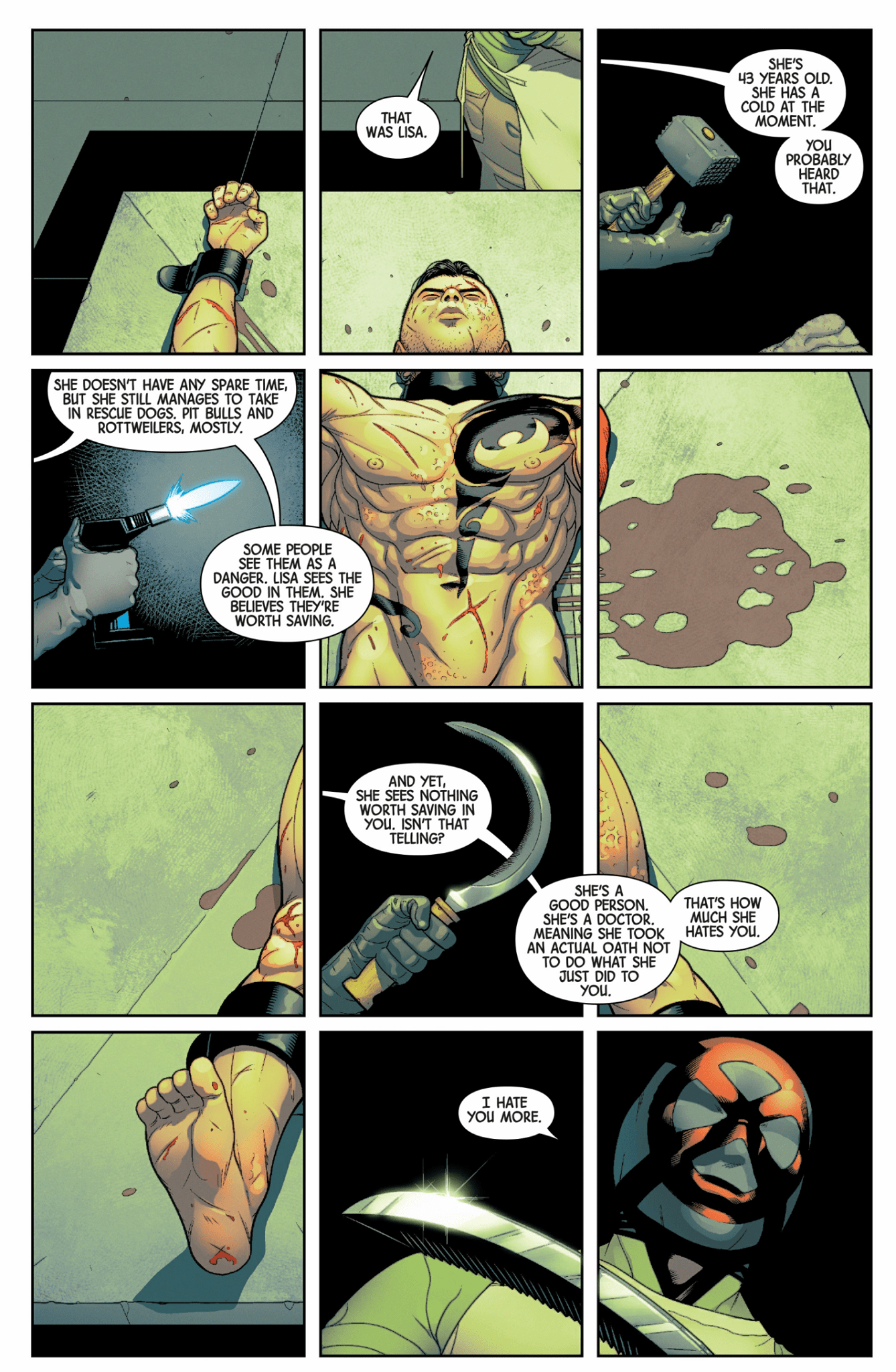 Elsewhere, at the home of Laura’s relatives, we see Laura, her aunt Megan, her cousin Debbie, Gabby, Warren (time-displaced teen Angel) and Jonathan the Wolverine watched Beast take Sarah Kinney’s vital signs. Beast confirmed that the lady in front of them was indeed the mother of Laura, who is alive and well. Laura, Megan, and Debbie then got an emotional mini reunion moment with Sarah. Gabby then excitedly introduced herself to Sarah and talked about her plans for a quality time bonding together. 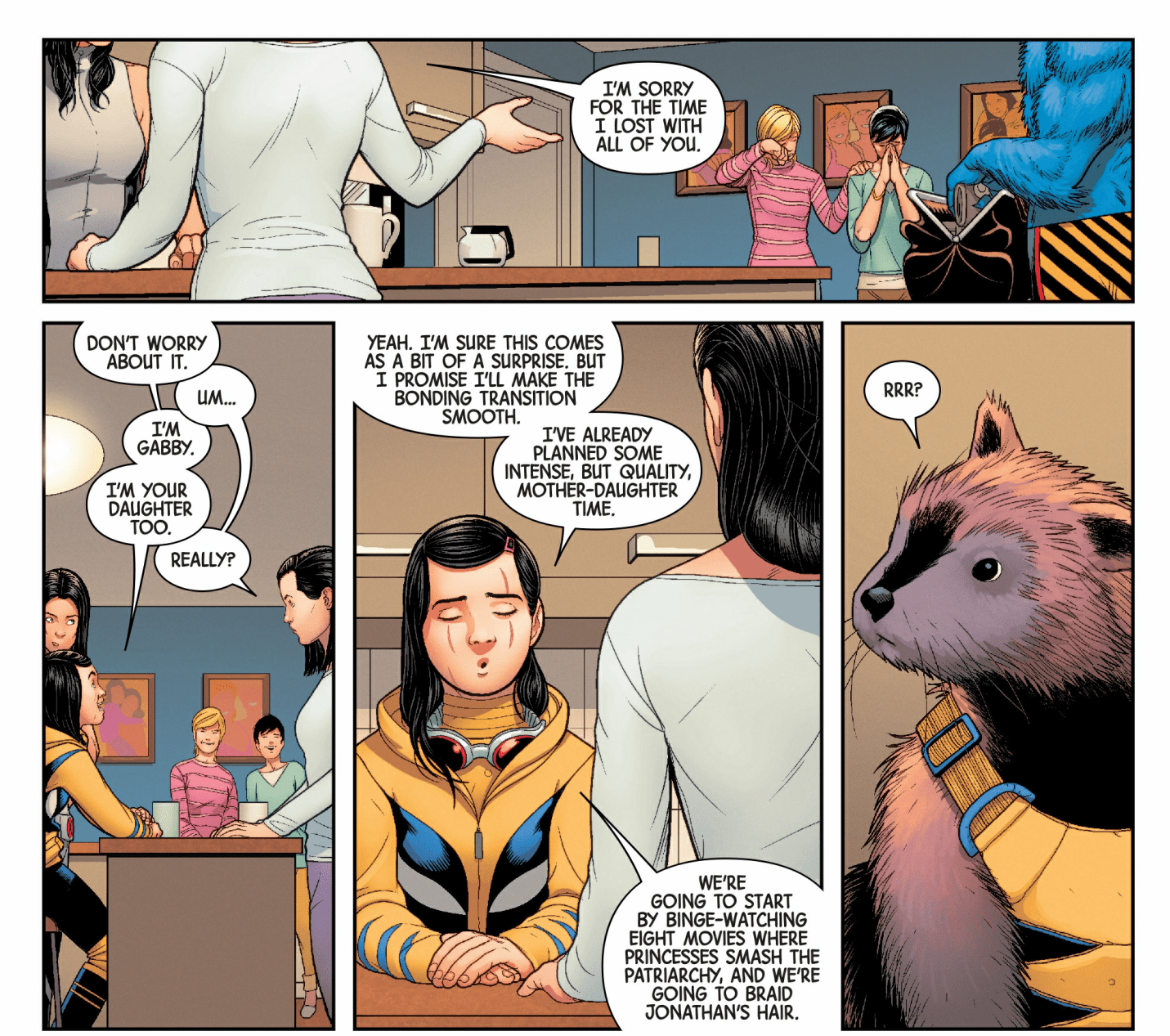 Back to Daken’s location, he grabs the mask of the man he killed and tries to come up from what looks like a basement. When he reached the upper floor, he then sees Lisa with her dogs watching television of what seemed to be a live video of the Kinney’s mini-reunion. Lisa noticed Daken and tried to shoot and kill him. Her dogs also went after Daken.

Back at Daken’s POV. Lisa called for help and kept shooting at Daken. Some of Lisa’s neighbours were members of the Orphans of X and tried to shoot at Daken too. Daken grabbed one of Lisa’s dogs and threw it at one of the shooters who was driving a car. The dog attacked the driver and Daken kicks both the dog and the injured driver out. He then drives the car to escape, while some Orphan of X members chased after him while shooting their guns at him. 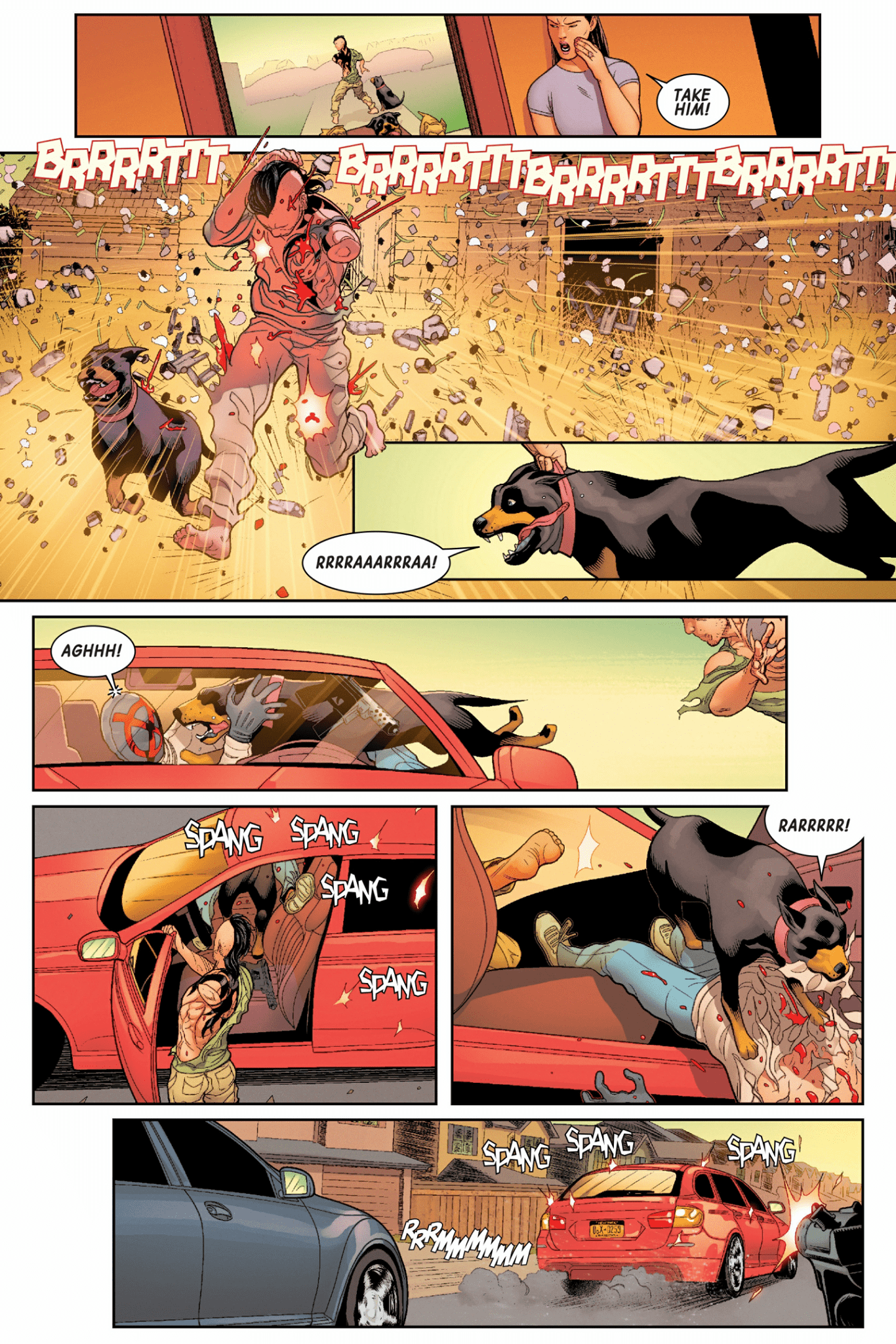 Laura and Gabby heard the gunshots nearby. They came out of the house and saw a speeding car approaching their location. Laura/Wolverine tried to stop the car and saw that the driver was Daken. Daken hits the brakes and stopped the car. Daken invited Wolverine to come inside the car, but she refused and told him that he’s the one who had to get out of the car. Daken tells her that there were people right behind him, trying to shoot and capture him. Wolverine, looking confused, asked who was chasing him. Daken looked behind him using his rear-view mirror and saw that no one was actually chasing him. Confused, Daken came out of the car and asked what was going on.

In terms of plot progression, nothing much happened in this issue. It was more focused on Daken’s attempt to escape from his captors, which was action packed and fast paced. There were some nice moments that were worth mentioning in the book. One of them was how Gabby tried to explain and introduce herself to Sarah Kinney. Another was seeing Jonathan the real live wolverine wearing “Wolverine” costume. The mini-reunion between mother and daughter(s) were one of the best parts of this issue. I am however curious as to where Taylor is leading the main cast after discovering Sarah. Moving forward, the art by Cabal is one of the best parts of this book. Looking at his art and how he played with the panels seemed like I was watching a live action sequence from a movie. His clean art style was consistently gorgeous to look at. Despite that fact, a minor issue I had with his style was how he drew Beast. Since art is a very subjective matter, in my opinion, I did not really like his take on Beast’s look. I would also like to mention Woodard’s colours and lighting effects which made the book more vibrant and pleasing to the eye despite the fast-paced story progression. At the end of the day, the book was still very entertaining to read and I am looking forward as to how all of this would connect in the next issue. Might I add, while I was reading this issue, I was also listening to Queen’s Bohemian Rhapsody which for some reason the lyrics of the song sort of fits perfectly with this issue’s action-packed story (hence the title for the review.)

Final Thought: Despite being exciting and fast-paced, the story is starting to drag after that explosive story introduction from the last issue. The art is still gorgeous to look at and it was really fun to see Cabal playing around the pacing and flow of the art with the comic panels.