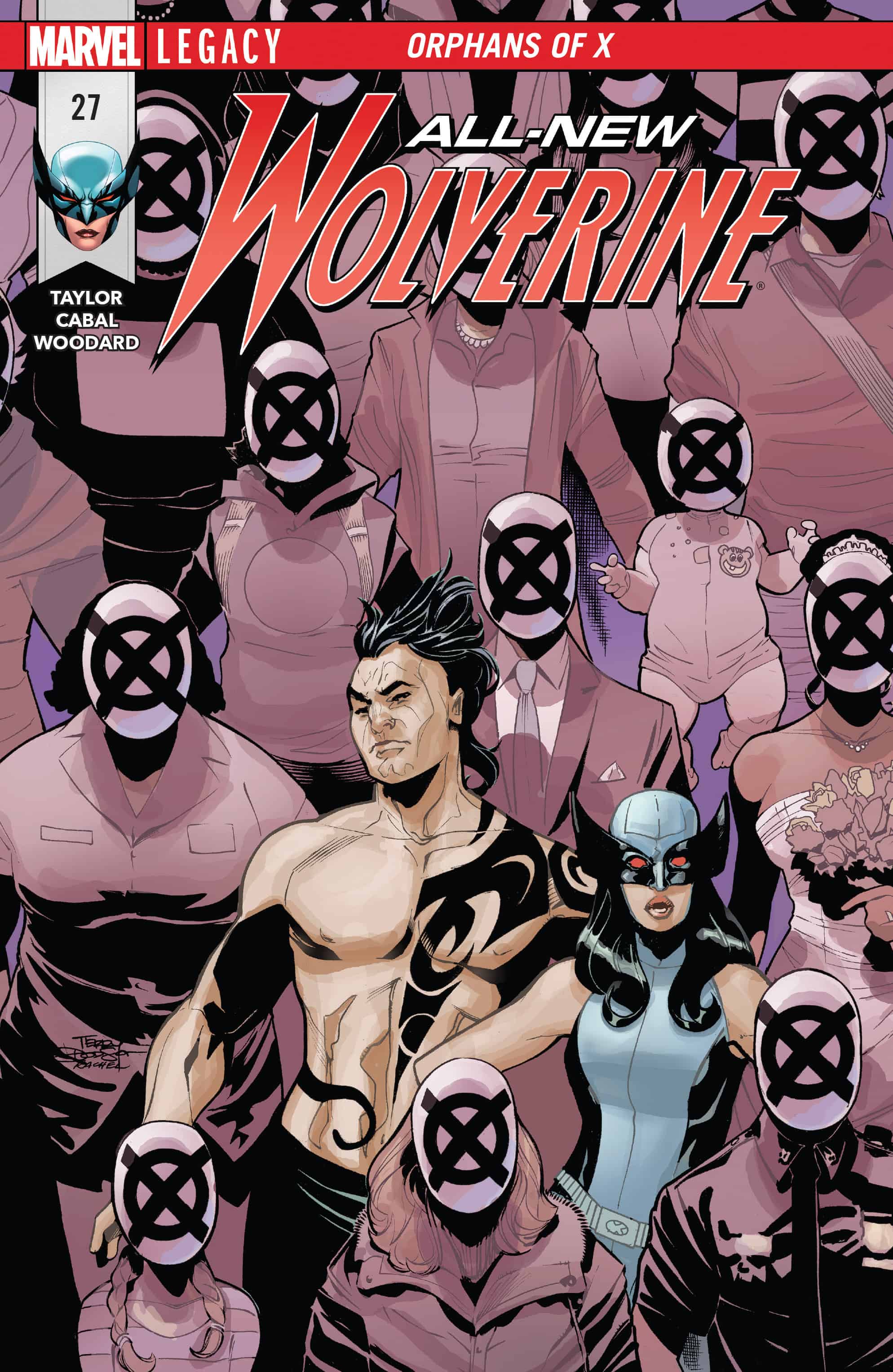 Daken managed to escape the Orphans of X, and he warns All-New Wolverine that they are all in danger, but what’s the connection between the Orphans and Sarah Kinney?

Previously:
Daken woke up in a basement being experimented with one of the members of the Orphans of X. He managed to kill his captor and escaped. As soon as he comes up from the basement another member of the Orphans saw him. This then leads into one violent goose chase. Elsewhere, in Laura’s aunt Megan’s house, Beast examined Sarah Kinney also confirming she was the real deal. Laura was happy to be reunited with her mother and Gabby introduced herself cheerfully. They then talked about the people who had kept Sarah for a long time. Sarah Kinney then warned her daughter that whoever took her were after Wolverine and others like her. Their conversation was interrupted when they heard loud gunshot noises outside. All-New Wolverine decided to check it out, telling Gabby to stay behind and watch their family in case thing went bad. Nearby, Daken was getting chased and shot by members of the Orphans of X. He then turned the car to another side of the street. Surprisingly he saw all-new Wolverine in the middle of the road. He tried to hit the breaks, but it was too late. Wolverine flipped over the runaway car and avoided getting hit. The two were surprised to see each other. Daken told Wolverine to get in the car, she refused his invite and told him he had to get out of the car. Daken warned her that there were men chasing him behind. Confused Wolverine asked him who was chasing him and pointed out that no one was behind Daken’s vehicle. Disoriented with the circumstance, Daken stepped out of the car and looked back at the road he passed. He then asked what was going on.

What You’ll Find Out:
Inside the Kinney’s house, Gabby with Aunt Debbie, Megan, and Jonathan the wolverine prepared to attack whoever was causing the chaos outside. They heard a knock on the door and were surprised that it was just Laura and the missing, one-armed Daken. 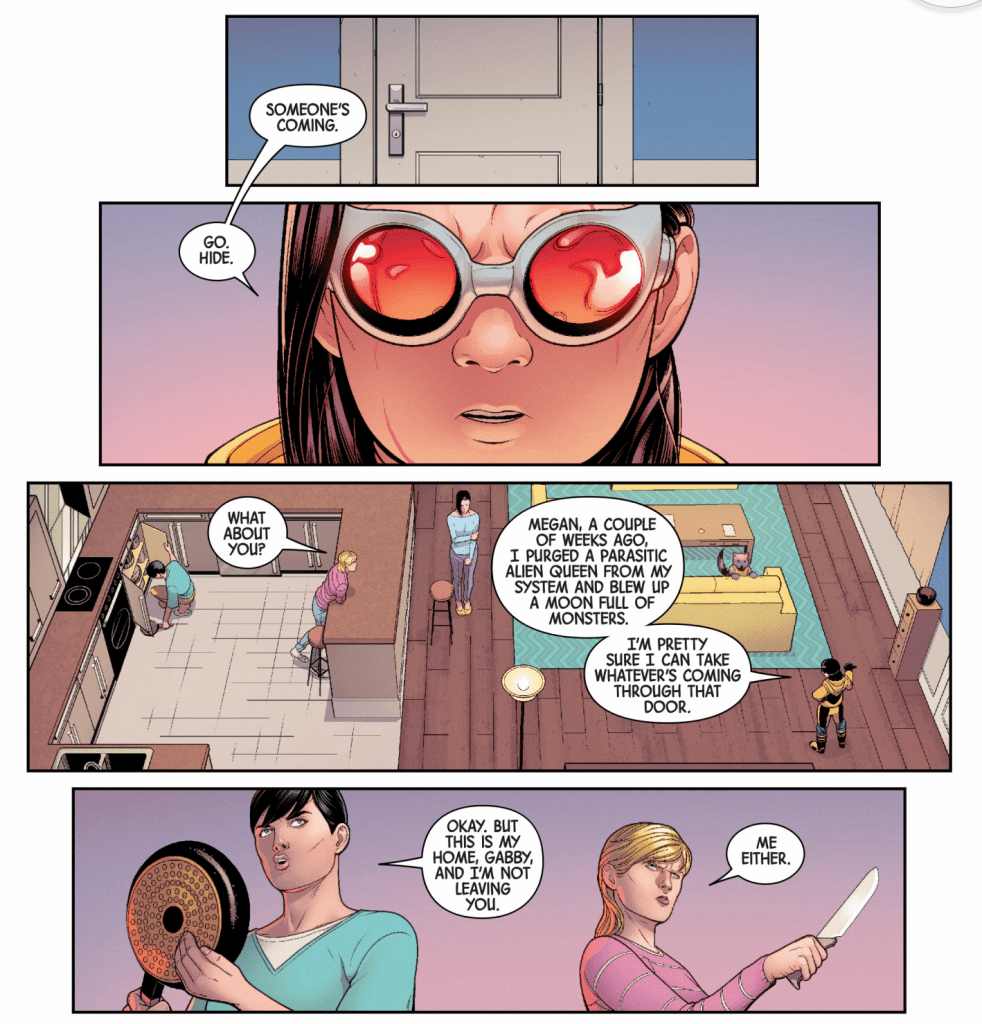 Gabby was relieved that they found Daken and told him that they were all worried and looking for him. Daken warned them that whoever kidnapped and tortured him was watching them. Laura told Daken that no one was following him and reassured that they were safe. Daken agitated by Laura’s skepticism, tried to explain it to her aggressively, while Gabby on the side was offering drinks to Daken. 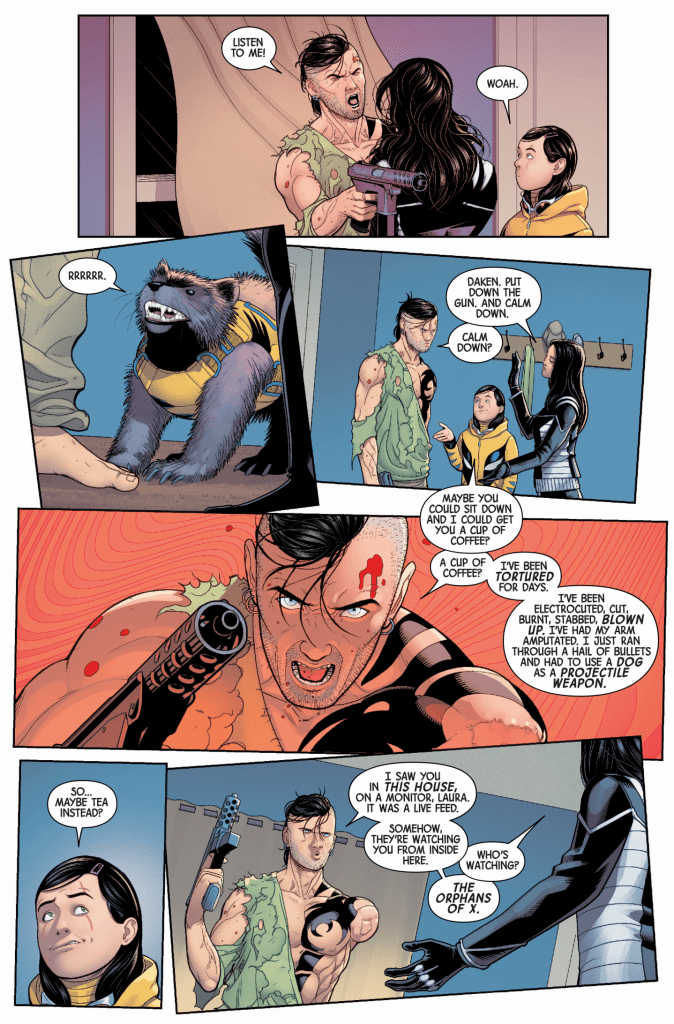 Daken then noticed the other people inside the house and asked Laura who they were. Laura then introduced her aunt Debbie, cousin Megan and her mom, Sarah. Surprised by the introduction of Sarah, Daken then asked Laura if Sarah was her supposedly “dead” mother. He then thought it was kind of a convenient coincidence for Laura’s dead mother to be alive the same time a powerful, mysterious group is trying to hunt them down. Laura reassured him it was indeed her mother and that she could tell that her mom was telling the truth by listening to her heartbeat. Daken, realized something when he heard Laura mentioned heartbeat and shot Sarah Kinney. This the angered Laura and violently beat down Daken. With the help of Megan, Gabby, and Jonathan they were also beating Daken as well. Daken tried to stop them and explain himself but the ladies and the Wolverine (the real one) refused to listen. 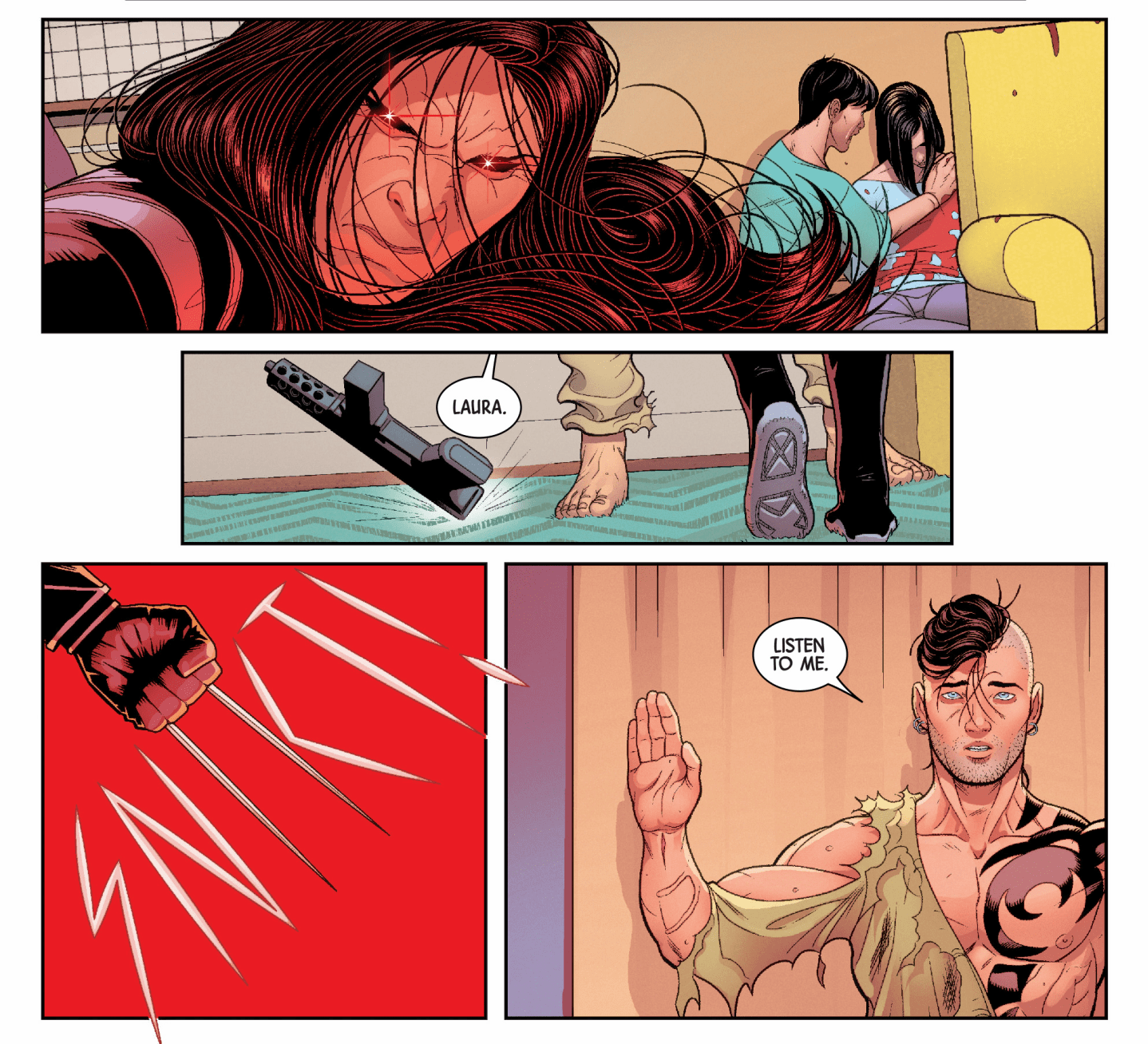 Weak and dying in Debbie’s arm, Sarah called out for her daughter. Laura stopped attacking Daken and ran toward her dying mother. Sarah then told Laura that they were coming. All of a sudden Sarah changed and looked like she was programmed and said that the Orphans of X are coming for them, then died. Daken who was healing from walked towards a heartbroken Laura and comforted her. She realized that Daken was indeed telling the truth and that the reason her heartbeat sounded like she was telling the truth was that she was programmed to. He then asked if she mentioned or told Sarah any information or the whereabouts of the Muramasa. Laura responded that she had not mentioned or talked about the location of the sword. However, she did tell Captain Marvel the location of the sword and requested to destroy it. Elsewhere, members of the Orphans of X were tracking Captain Marvel who was heading to the location of the Muramasa blade. Captain Marvel arrived at the location of the sword, in Alberta, Canada. Above her, the Orphans of X dropped one of their members who was willing to kill herself as a sacrifice for their cause. She wore an armor that charged up to energy while she is diving towards the clueless Captain Marvel. At the same time, Carol Danvers got a call from Laura who tried to warn her about the Orphans of X, but it was all too late.

Laura and Daken realized this and knew that the Orphans had finally acquired the one weapon that could kill their kind. They decided to leave and find the others like them and hide from the Orphans. Back in Alberta, agents of the Orphans of X were picking up the pieces of the Muramasa blade, left the unconscious Captain Marvel and was now preparing their plan to kill Wolverine’s kind.

What Just Happened:
Another mind-blowing issue from Tom Taylor. What else can I say? This issue was full of fun and intense and very exciting moments. It had all the emotions I wanted to feel and experience in a well-written action comic book. The way Taylor managed to balance comedy, action, and drama in one issue was very effective and fun. Definitely no dull moments in this issue. The way Gabby interacted with a very aggressive and anxious Daken was brilliantly hilarious and I loved the fact that Aunt Debbie and Megan were joining in the fight as well. The emotions expressed and how Cabal delivered it through his art was excellent. From how Laura expressed how happy she was knowing her mother was alive and how good she felt when she told Daken about it as well. To the very intense scene where Daken kills Sarah Kinney to protect Laura and the gang. You can feel every emotion the characters felt by looking at it.

Another good thing about this was how the story was very fast paced but still managed to add in some character development and smart scripting. Again, with Cabal’s awesome artwork and Woodard’s vibrant colors, we have one of the best books in the Marvel Legacy run. Speaking of Cabal’s art, I also love how he wonderfully crafted and stylishly planned the comic panels in this book. Working his way to effectively tell the story and make sure he brings out life to these characters. Also, might I include the attention to details he did on this issue.

The only thing that I found weird, was how Captain Marvel was easily defeated by the Orphans of X. I expected to see her put up a fight since she is one of the strongest heroes in Marvel. But other than that, I pretty much enjoyed this issue and I am glad that Taylor is still at the top of his game. Because of this, I am now very excited as to how Tom Taylor will deliver the same magic on the recently announced and highly anticipated X-Men Red (which also revealed that Laura and Gabby are joining the team.)

Final Thought:
Another mind-blowing and action-packed story from Tom Taylor! Taylor has been consistently writing the book very well and for this issue was able to balance the character development, plot and very entertaining action scenes. Especially added with Cabal’s beautiful art and very entertaining paneling. We have another top-quality book that deserves all the recognition.