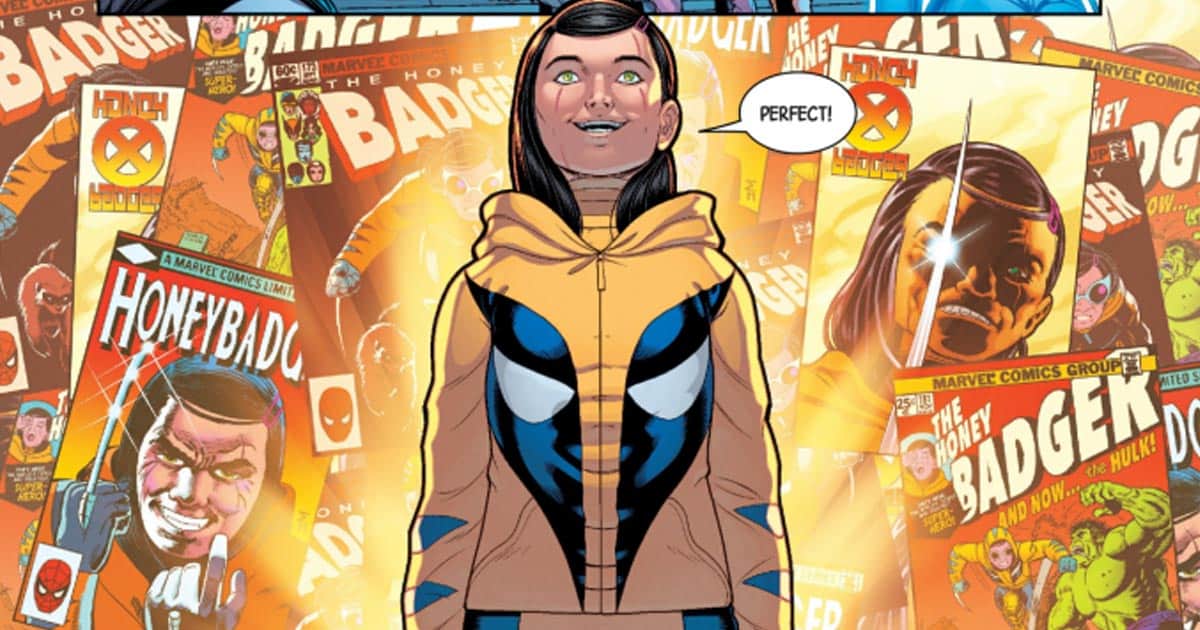 The Orphans of X finally got their hands on the Murumasa blade, All-New Wolverine and the gang are now on the run to Japan to find a way to counter their enemy’s evil plan. Plus, Gabby finally get a superhero name and that is definitely a milestone! 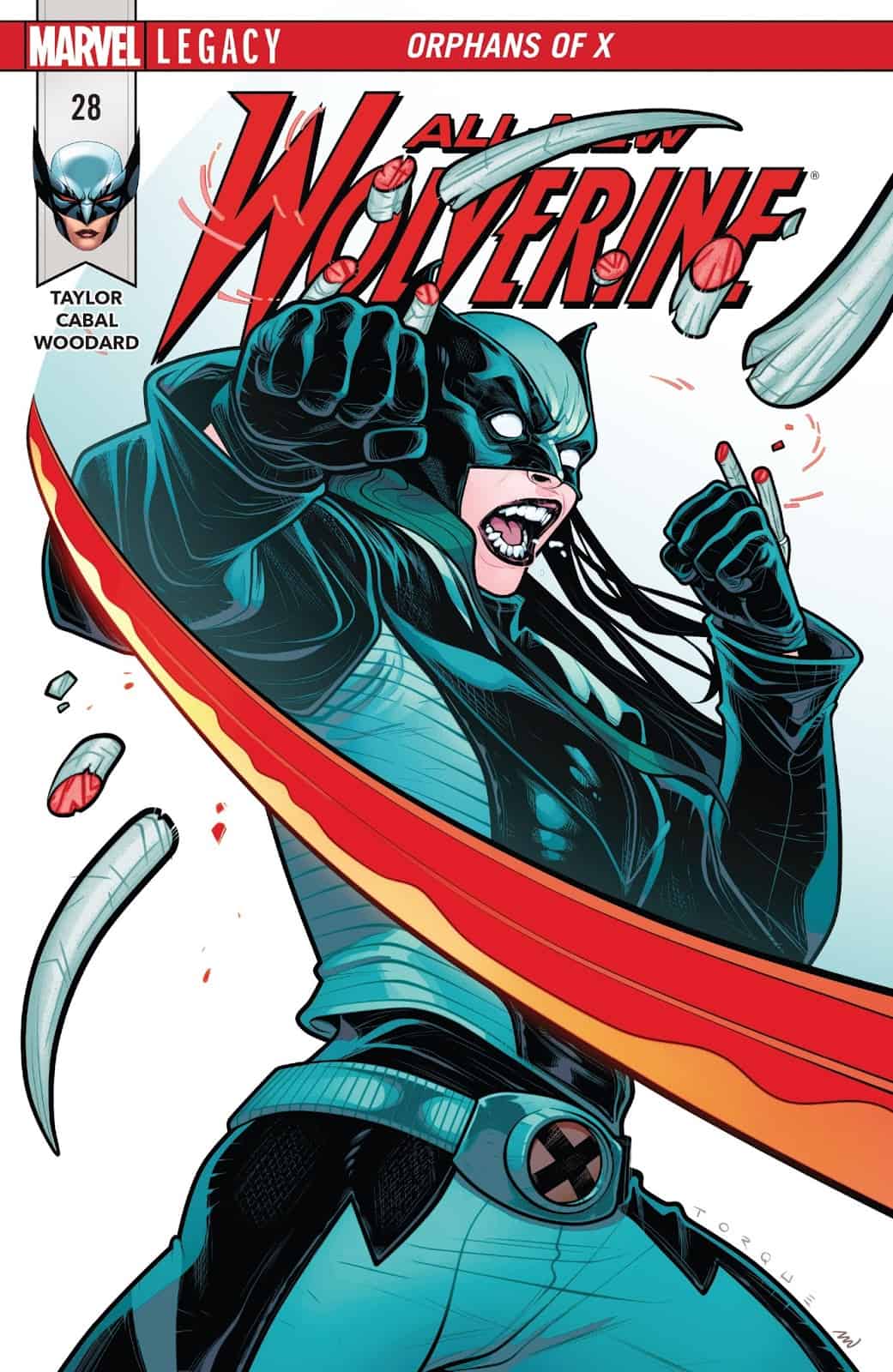 What You Need To Know:
After escaping from the Orphans of X, Daken bumps into his half Sister, the All-New Wolverine. He then killed Sarah Kinney which caused Laura to go berserk and attacked him. The death of Sarah, however, exposed the truth that she was indeed a fake clone and that she a mole for the Orphans to get more information from Laura about the Murumasa blade. Daken asked Laura if she had she had mentioned the whereabouts of the blade to Sarah but did inform Captain Marvel so that they could destroy the blade before the Orphans find it. The Orphans, however, were able to get this information and tracked Captain Marvel. Before Laura could warn Carol Danvers, the Orphans were able to ambush the heroine and were able to acquire the Murumasa blade. Laura, Daken, Gabby and the Kinneys with Jonathan the wolverine then all agreed they need to run and hide from their enemy, at this point their lives are in danger. The Orphans were now seen ready to prepare for their next plan, to eliminate all of the Wolverine clan/Weapon X experiments.

What You’ll Find Out:
Members of the Orphans were seen creating and bonding part of the Murumasa blade into a bullet, they then move forward with their plans to hunt down the Wolverines. Elsewhere, Megan Kinney approached Laura asking what were they doing. Laura told her that they were waiting for the lift to Madripoor. Laura then tried to open up about what the Orphans of X said back when they attacked them and the guilt she felt for destroying families and the lives of the organization’s members. Megan told her not to mind it at all and reminded Laura that what she did was during the past and aside from that Laura had done more good by saving lives, including herself and Debbie. Debbie then approached the two ladies and asked what were they running away from. Laura and Daken then explained that the Murumasa blade is their weakness since once they get hit by the blade it inhibits their healing factor. Which meant that any fatal hut could actually kill them. 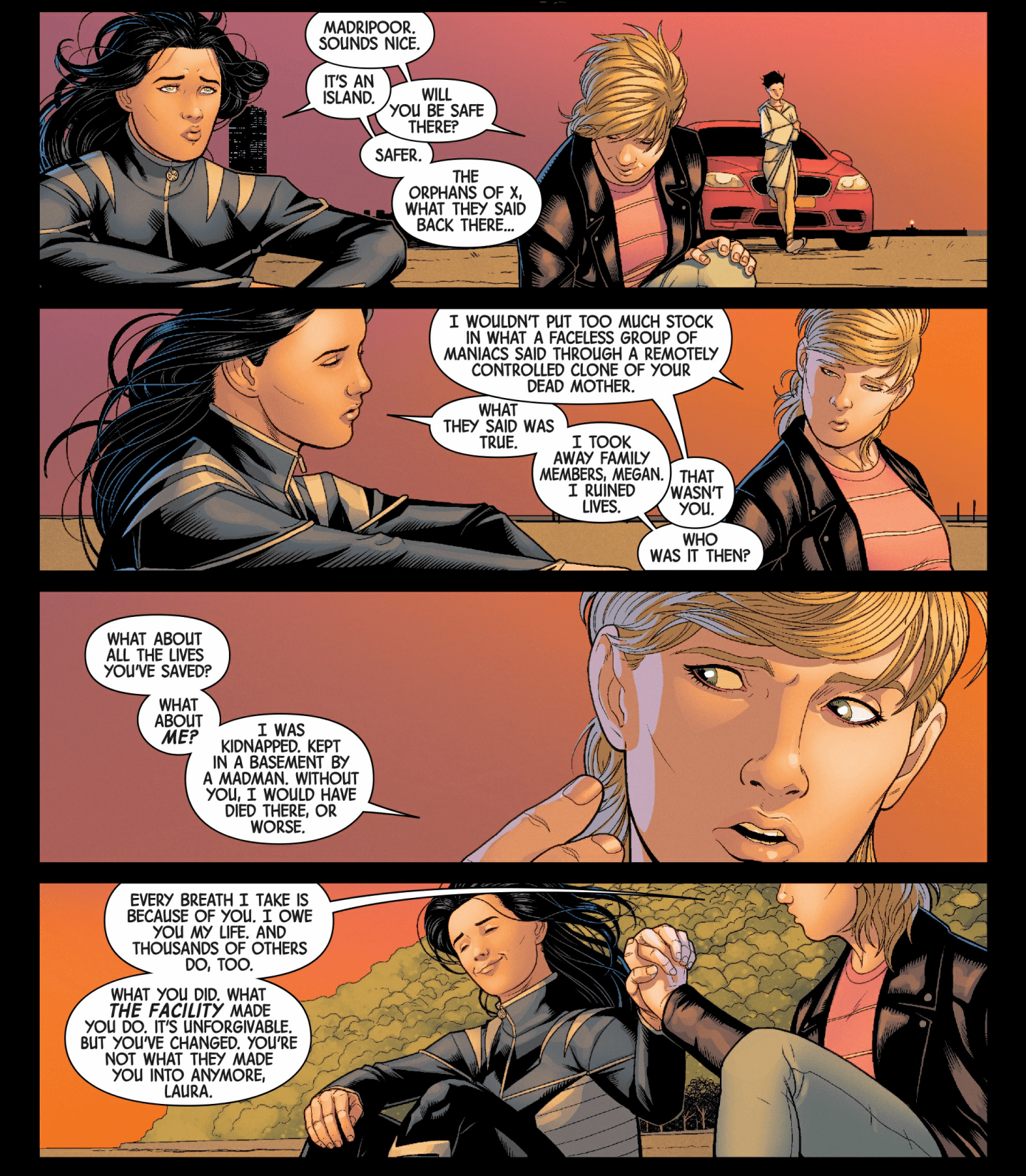 All of a sudden their conversation was interrupted when Laura and Daken heard incoming helicopters. They knew that the Orphans of X had found them and that they had to escape. One helicopter launched a missile at them. Fortunately enough the missile missed. The Orphans riding on the helicopter then started shooting at them. Daken got hit in his waist area, the bullet shooting right through him. Laura instructed Gabby to find and get the bullet that hit Daken. Aunt Debbie then points out to Laura that another jet plane was coming towards them. Laura told them that it was their ride. The group was able to get on the jet plane and escape the Orphans of X.

Inside, Laura and Megan tried to apply pressure on Daken’s wound to stop the bleeding. Laura asked Gabby to show her the bullet. After seeing the bullet, Laura confirmed that it was indeed bonded with a piece of the Murumasa blade. She then asked forgiveness from Daken for cutting the area where he got shot in order to get rid of the part that wouldn’t heal. Daken agreed and allowed her to do that job. After they bandaged Daken, Megan told him to rest and heal. Daken sat up, thanking her for helping him not die. He then asked forgiveness for the way they had met with a matching smile. Laura told Daken to stop whatever he was trying to do (flirting with her cousin.) She then proceeded to tell the group that they can’t go to Madripoor and bring the problem to the X-Men without knowing how to stop it. Laura told the pilot they will have a new destination. Confused, aunt Debbie then pointed out to Laura that there was no pilot. A voice then suddenly said the there is a pilot and revealed itself. It was the X-Men’s very own Danger. Gabby then expressed her amazement towards Danger’s name. She then added that she couldn’t be just Gabby anymore and that she needed a superhero name. Daken then suggested the codename “Honey Badger.” Gabby asked him why. He explained that it was because she was sweet like honey and had claws. Gabby loved her new codename and re-imagined all the famous Wolverine stories and exchanged it for herself and her new superhero name. 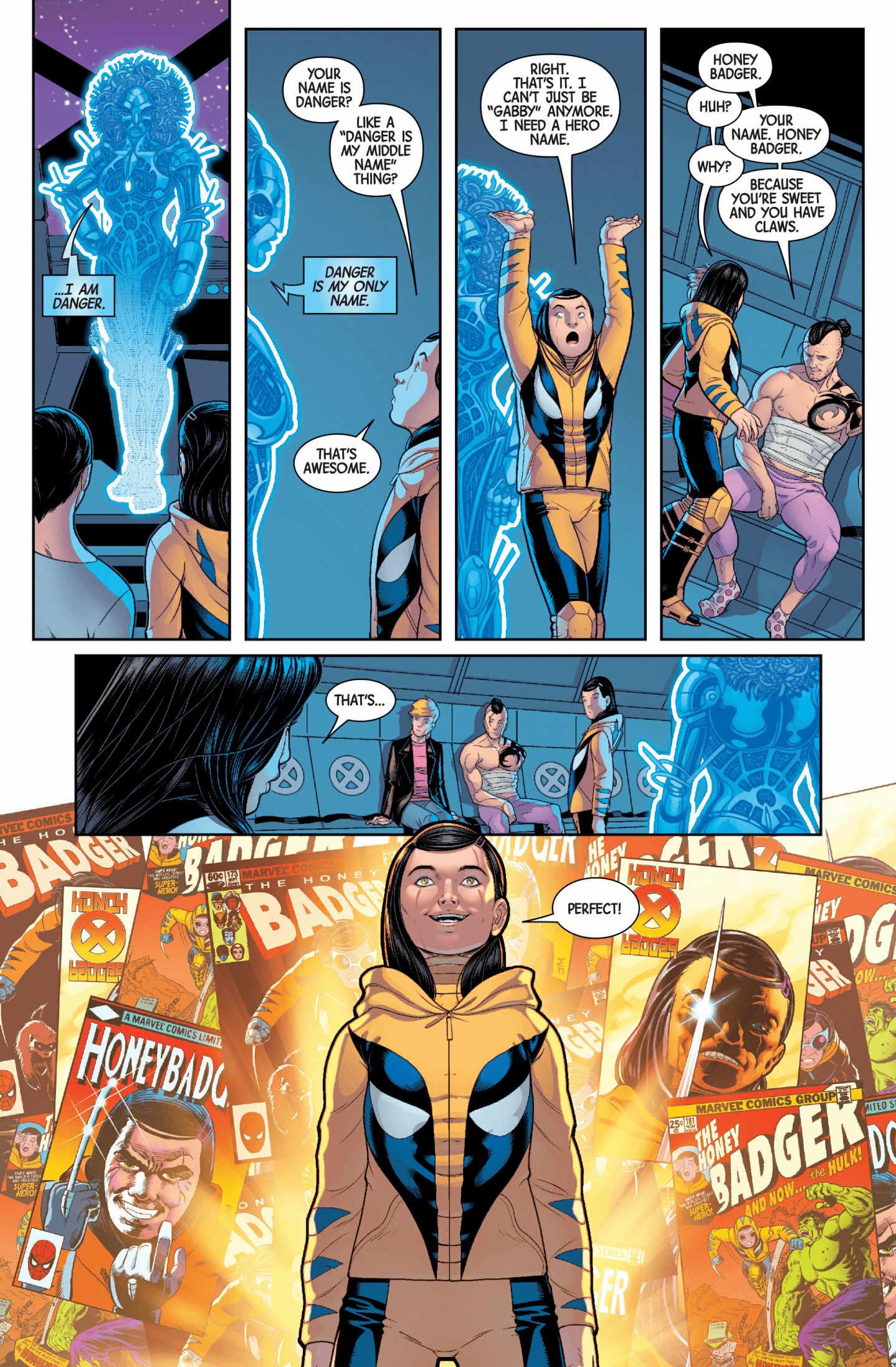 The group then arrived at their destination at Tokyo, Japan. They then went underground to locate Murumasa’s headquarters. They eventually found him and introduced themselves and their purpose. Laura then suggested that they talk about the matter inside Murumasa’s home. Inside, Laura and Daken were able to show Murumasa the bullet that was bonded a piece of the blade he made. Laura asked if there was a way that they could face it. Murumasa then told them that he was able to create a shield which could counter the blade. The only problem was that a shield was only effective against swords. Murumasa told them that he could not make something that could protect all of them but at least one of them instead. He added that it would require sacrifice from all of them. He specifically told Daken that he would require him to be whole for the sacrifice. Daken said that his healing factor was slower, but Murumasa said he wasn’t referring to his arm but his mind. He required Daken to meditate and release all guilt feeling towards his father, his fears, desires, and insecurities. Daken meditated to heal his physical injuries and his mind. Days later, Daken, Laura, and Gabby approached Murumasa somewhere outside. Murumasa told the three that he will need to take a part from each of them and that it will hurt. They proceeded with the ritual, the three hanged upside-down and showing Gabby in pain. 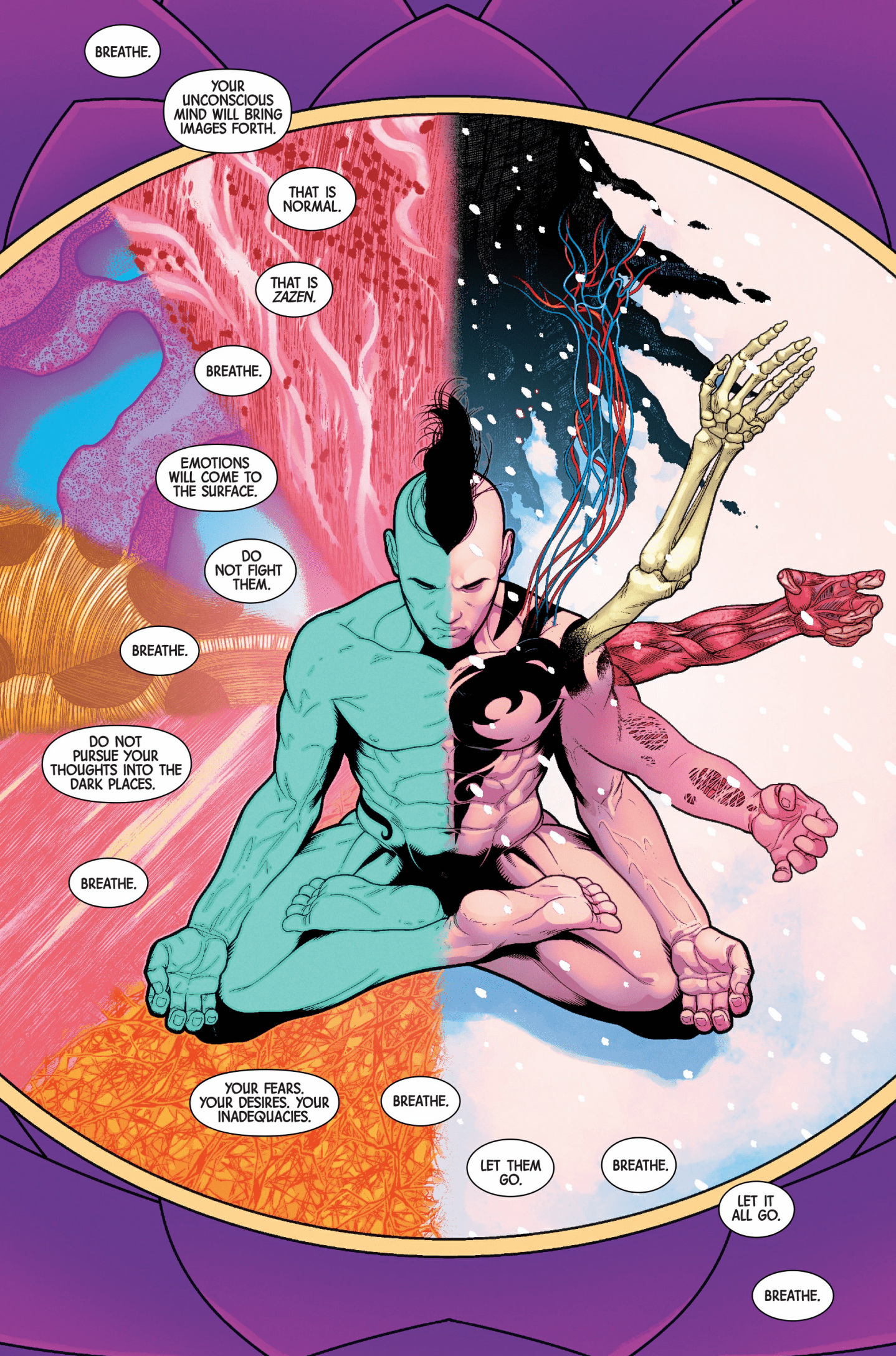 Elsewhere, Amber, a fellow member of the Orphans of X (and seemed to be an important member of the organization) was updated by another member that they had found Laura’s group in Japan. Amber told her fellow member to inform their people in Japan but to remember that she will personally deal with Laura. The fellow member then presented a kit with three guns with the specially modified Murumasa bullets to Amber. Amber then entered in a room packed with other members of the Orphan of X. Went centerstage and told every member to remove their mask because they no longer need to hide from their enemy anymore. She chose three members and handed them each a gun with the special bullet. She then revealed that they had captured Old Man Logan, Lady Deathstrike, and Sabertooth. All three chosen members of the Orphans of X shot their captives in the head. 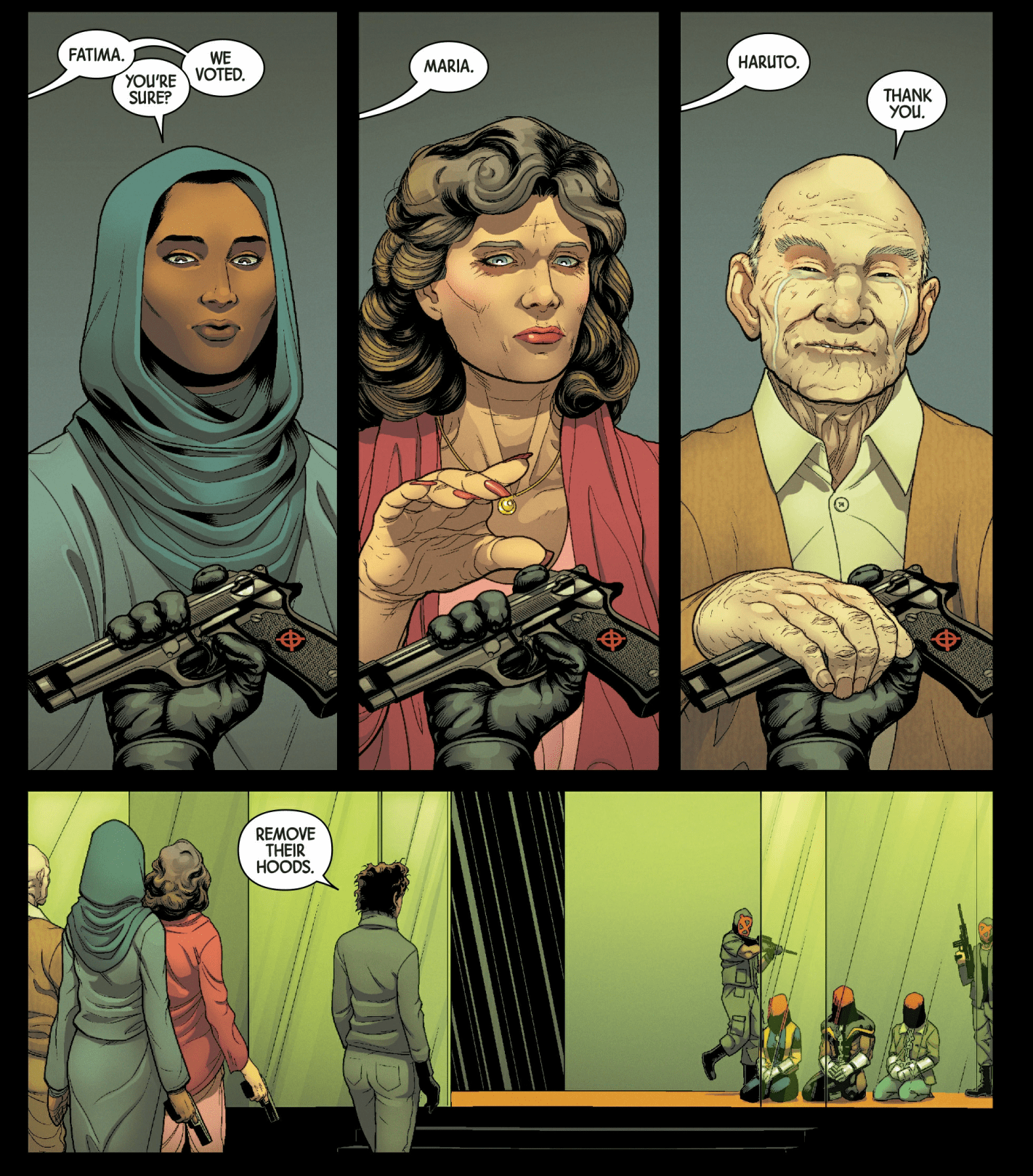 Exceptionally fun and an exciting issue to read. Tom Taylor has been rocking the Legacy arc for Laura and her family. The way this was written was well thought off and I loved how it is now starting to get bigger and will soon connect to the Weapon X series. The highlight, however, is Gabby finally getting her own superhero name. I loved that Daken was able to suggest the name based on Gabby’s personality. A personality which is opposite to most of Logan’s offspring. The superstar of the book would be Cabal as he had delivered a fantastic job doing the interiors for this issue. It was great to see him still playing around and experimenting with how he laid out the panels which added depth and flow to the story. As usual, with Woodard’s colors supplementing his art, this tandem is definitely a match made in heaven.