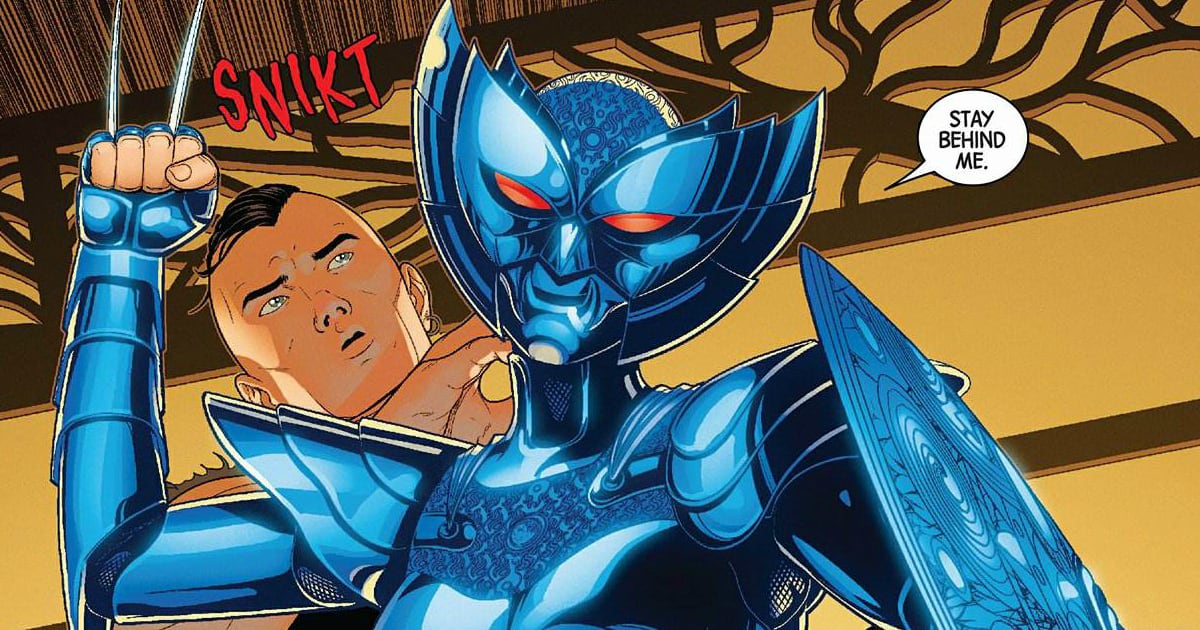 The Orphans of X finally went after All-New Wolverine and the gang in Japan. Is Murumasa even finished in creating the new armor he was creating for Laura? Find out in this penultimate chapter of this epic Legacy saga! 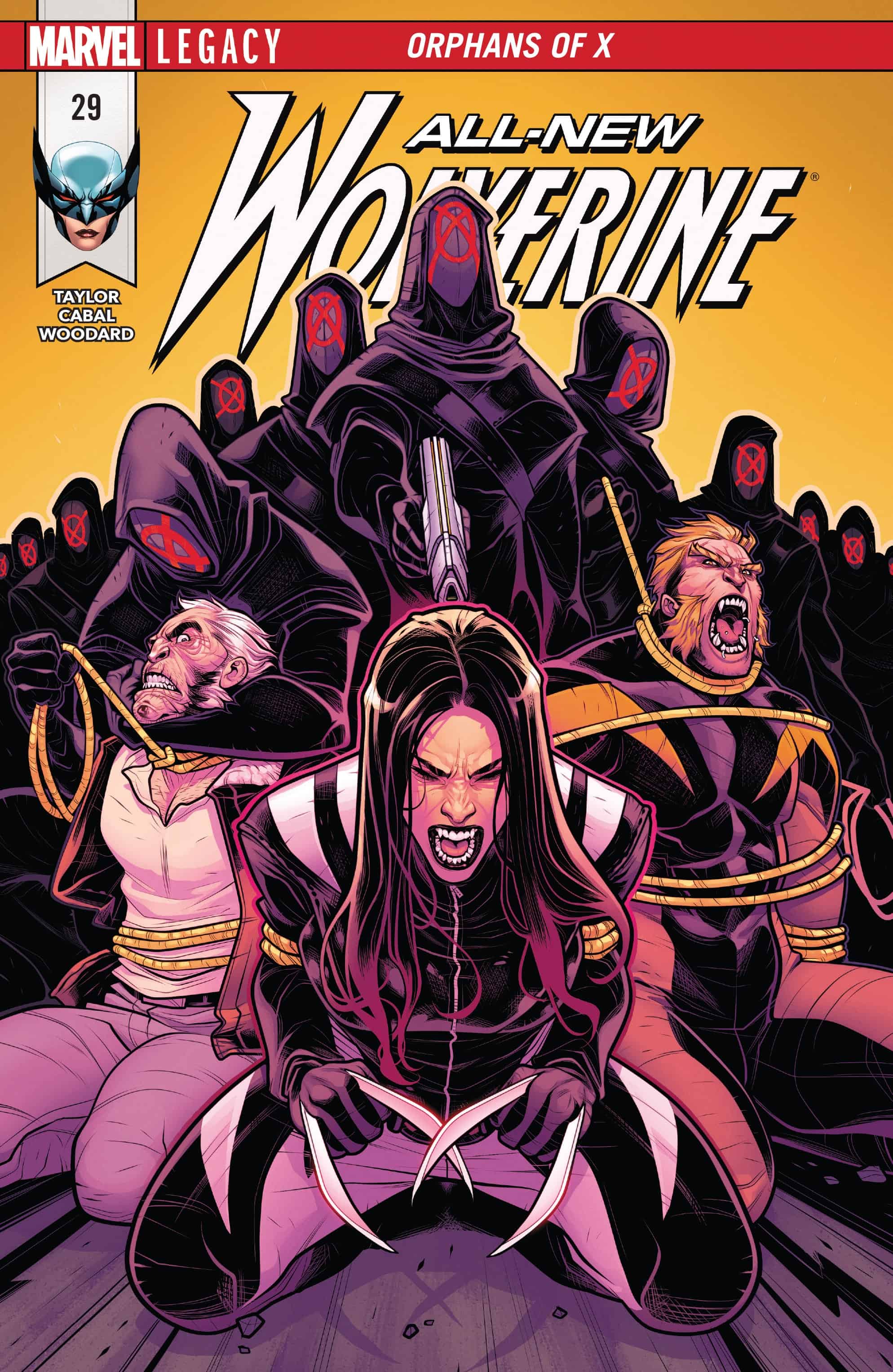 While waiting for their ride to Madripoor, Laura, Gabby, Daken and the Kinney’s location was found out by the Orphans of X. They were attacked by the Orphans of X who were already using guns that had bullets that were infused with the Murumasa blade. Daken was shot and got injured, Laura told Gabby to find the bullet that hit Daken.The gang barely escaped, but the Blackbird came on time. The gang then tried to stabilize Daken and remove the part of his muscles where the Murumasa bullet hit him to let him heal. Laura then decided not to go to Madripoor and decided to head straight to Japan. She informed the pilot who revealed to the rest of the team, it was Danger of the X-Men. Gabby expressed her frustration of not having a super-hero codename. Daken then suggested the codename “Honey Badger”, in which Gabby loved.
The gang then arrived in Japan, heading straight to Murumasa’s hideout. Laura, Daken, and Gabby then told Murumasa the situation. He said that he had made a shield to counter the blade he created, however, it would no longer be effective for bullets. He told them that he can create something new, but it could only be used by Laura and that he would require a sacrifice from them in return. Laura, Gabby, and Daken then agreed to proceed with the ritual and Murumasa prepared to create the armor.
Meanwhile, the Orphans of X informed one of their leader (Amber) that they had found the location of All-New Wolverine and the gang. Amber then responded the soldier to inform their counterparts in Japan to attack but to make sure to leave Laura for herself. She then entered a room filled with members of the Orphan of X, she gave selected members a gun each loaded with the Murumasa bullet. She then revealed in the center that they had captured Old Man Logan, Lady Deathstrike, and Sabretooth. Each member shot the mutants in the head.

After killing Old Man Logan, Lady Deathstrike, and Sabretooth, the leaders of the Orphans of X celebrated their achievement by making out beside the corpse. Back in Japan, Murumasa’s ritual to get parts of Laura, Daken and Gabby’s soul was completed. He then went on to begin creating the armor to counter the Murumasa bullets. Laura, Gabby, and Daken were recovering from the ritual with the care of the Kinneys. 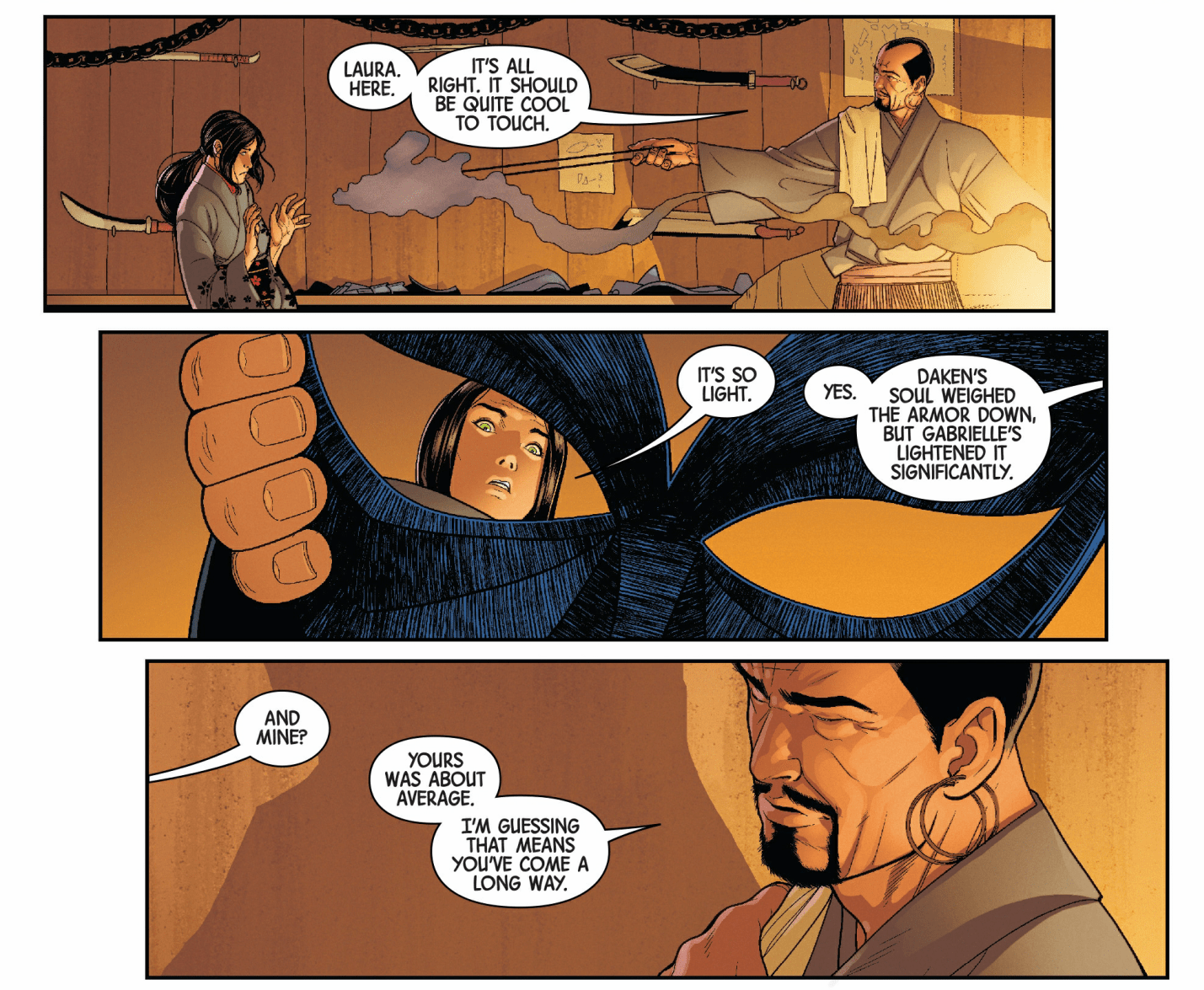 Days later, Murumasa showed Laura the mask he created as part of the armor that would protect her from the Murumasa Bullets. Murumasa explained that Daken’s soul gave weight to it but Gabby’s innocence was so light that it balanced it while Laura soul was about average which meant she had grown a lot. All of a sudden Laura smelt their enemy nearby, she ran back to Daken, Gabby, and the Kinneys to inform them that they were found. 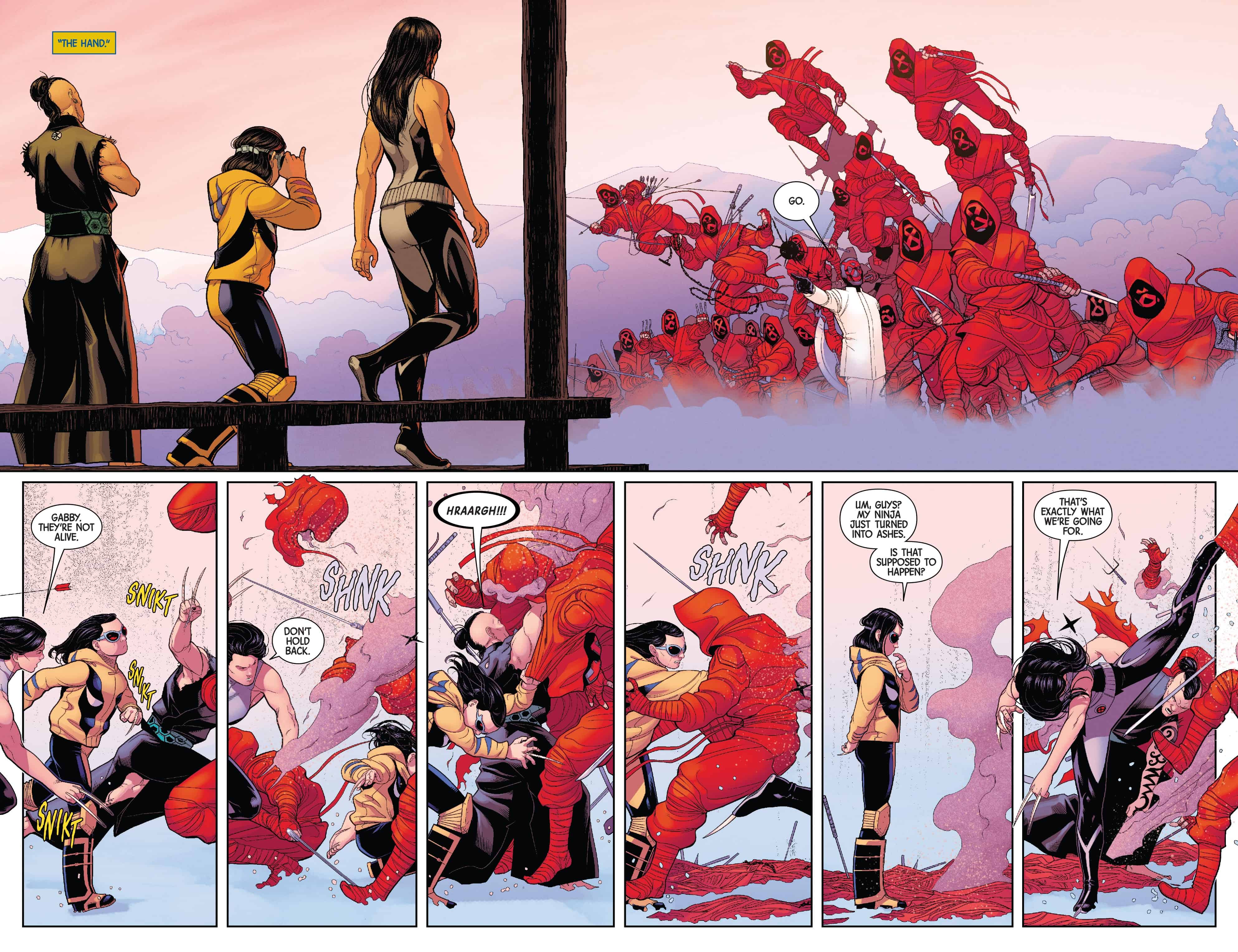 Ready for battle, All-New Wolverine, Daken and Honey-Badger saw an army of Hand Ninjas. All New Wolverine gave Honey Badger a heads up that the ninjas were not alive which meant that there was no holding back. The three fought the ninjas valiantly. But unfortunately, Honey Badger got shot by one of the Murumasa bullets. All-New Wolverine told Daken to carry Honey Badger and retreat back to shelter. When Daken arrived inside, the Kinney started treating Gabby who was more worried of becoming a zombie because she had bits of the Zombie Hand Ninjas in her mouth, however, they were interrupted by Amber and a few Orphans of X soldiers. Amber gave the orders to kill Daken, but All-New Wolverine now wearing the armor Murumasa created blocked the gunshot. Amber broke the news to Wolverine that the Orphans of X had killed Old Man Logan, Lady Deathstrike, and Sabretooth. This Angered Wolverine who rushed towards Amber and her group. She released a ferocious attacked that threw of the Orphans of X. Murumasa then apologized to Daken, Gabby and the Kinneys for the unpleasantness and made a call to have someone handle the intruders. Daken then asked Megan for her phone, sliced himself up and told her his plans. 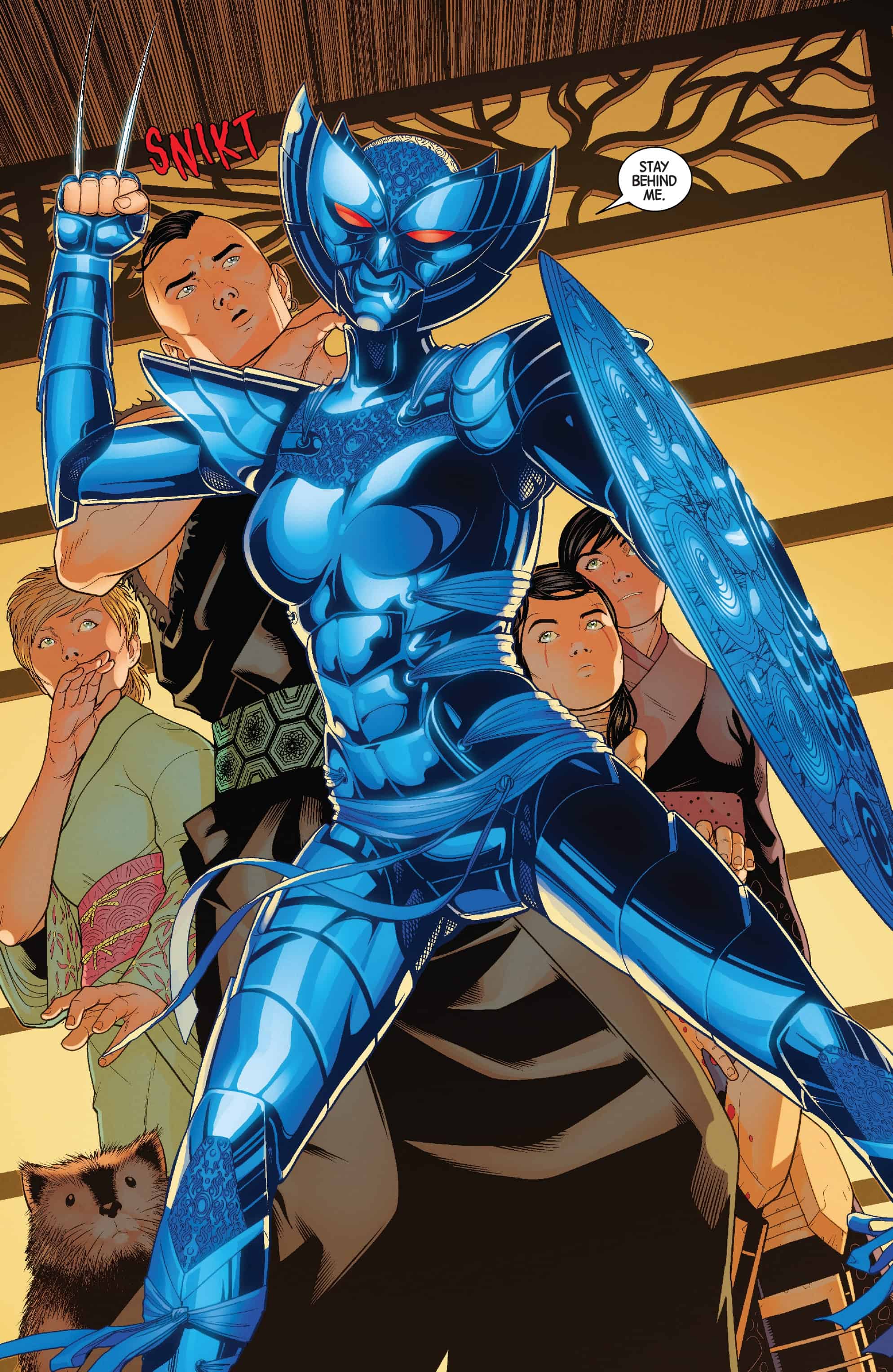 Daken went outside and joined Wolverine fighting of the Hand Ninjas and the Orphans of X. Daken’s goal was to get captured and told Wolverine to talk to Megan after the fight. The Orphans of X then retreated when they got a heads up that the person Murumasa contacted had arrived. One member of the Orphans of X told Amber that he will face that person and to make sure when they kill Daken to mention his and his daughter’s name. Amber left with the rest of the Orphans of X. The man was then approached and was beheaded by Gorgon. Gorgon then approached Murumasa who apologized for what had transpired at Murumasa’s home. He added that he was not aware that one of the Hand’s lieutenants would use them for his own cause. As a special agreement, Murumasa then told Gorgon he would need a piece of his soul to create something as a reminder of this incident and also told Gorgon that as part of their agreement Gorgon will transport Wolverine and her family anywhere she wished to be dropped off too under the Hands protection. Gorgon agreed and asked Wolverine where she wanted to be dropped off. Before Wolverine could respond, she asked Megan what was Daken’s plan. Megan then told her that Daken took her phone and placed it (literally) inside his body so that they could track him down by using Aunt Debbie’s phone. 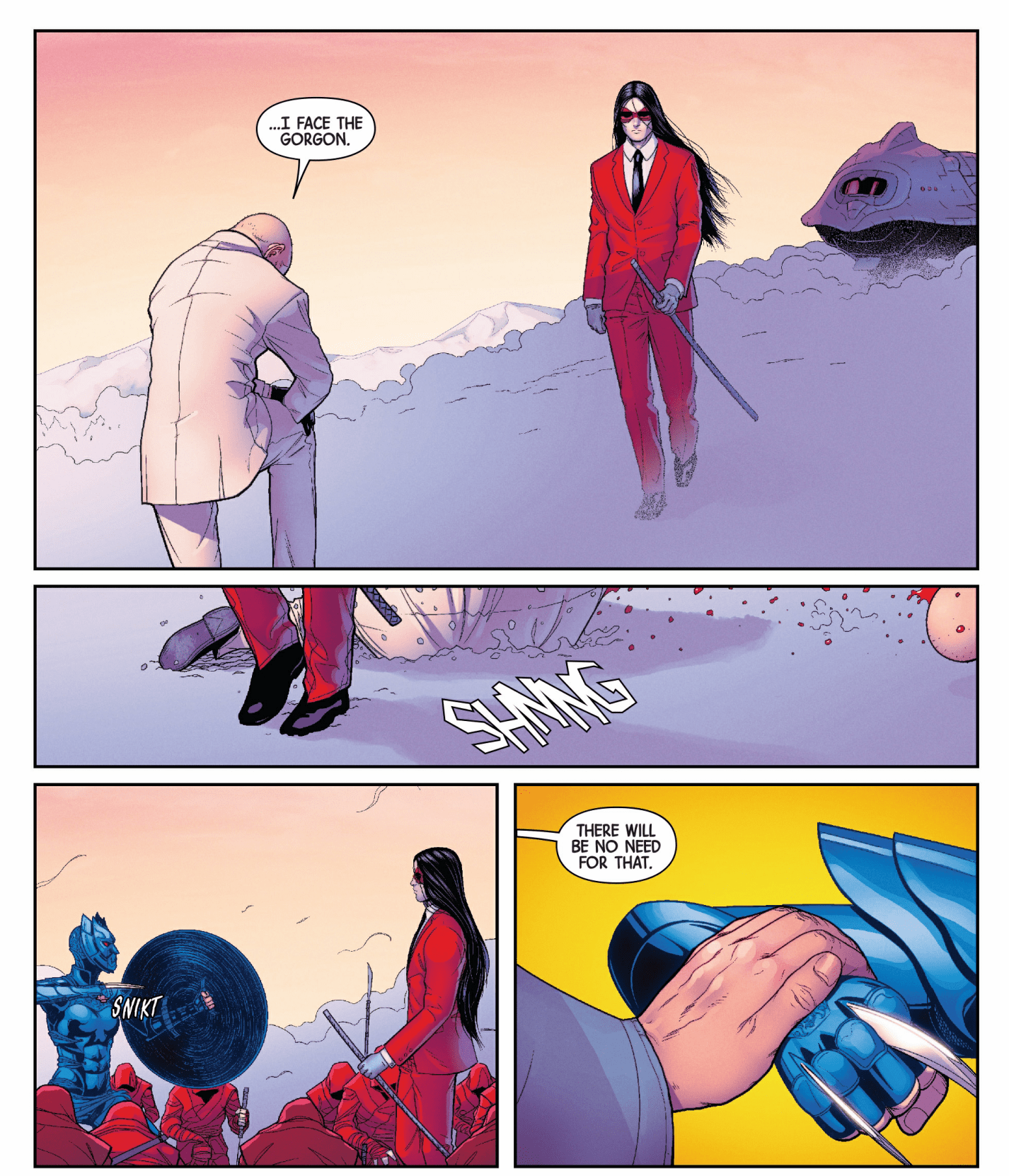 Forty-eight hours later, Wolverine and Honey Badger infiltrated the warehouse that the Orphans of X were hiding and doing their operations. They went inside unnoticed and knock out a few guards who were guarding the corpse of Old Man Logan, Lady Deathstrike, Sabretooth, and Daken. Wolverine then got herself prepared to do a brain surgery.

This is book felt like it was intended to keep readers excited for the final story of the current arc. We did not see much character development or milestone that needed special mention (aside from the armor that Murumasa created, which I think will be forgotten after this arc.) However, it was cool (in a cheesy way) to see Wolverine wear the armor for her protection against the Murumasa Bullets. I think the superstar for this issue was Juann Cabal. From start until the last page of the comic his art was gorgeous to look at and really captured the fast paced, action packed story written by Taylor. It still felt off with the fact that the Orphans of X seemed kind of over-powered, but I am not going to jump into conclusions yet without finishing the whole arc because it might be addressed by Taylor on the next coming issue. All in all, this issue definitely delivered the same high-quality story and art that the creative team had been producing and I do hope they keep this up.

While this issue was a fun read, it does not give you any answers to all the questions behind the Orphans of X. However, Tom Taylor definitely wanted to save the best for the last, by making sure that the penultimate chapter of the Orphans of X saga would make you feel more excited for the next issue. With Cabal’s beautiful art and Woodard’s vibrant colors, this book is still a must buy!