A spotlight on Honey Badger, Jonathan the Wolverine’s Past and Deadpool… Plus, cute and furry Zombies! What more can you ask for in a comic!? 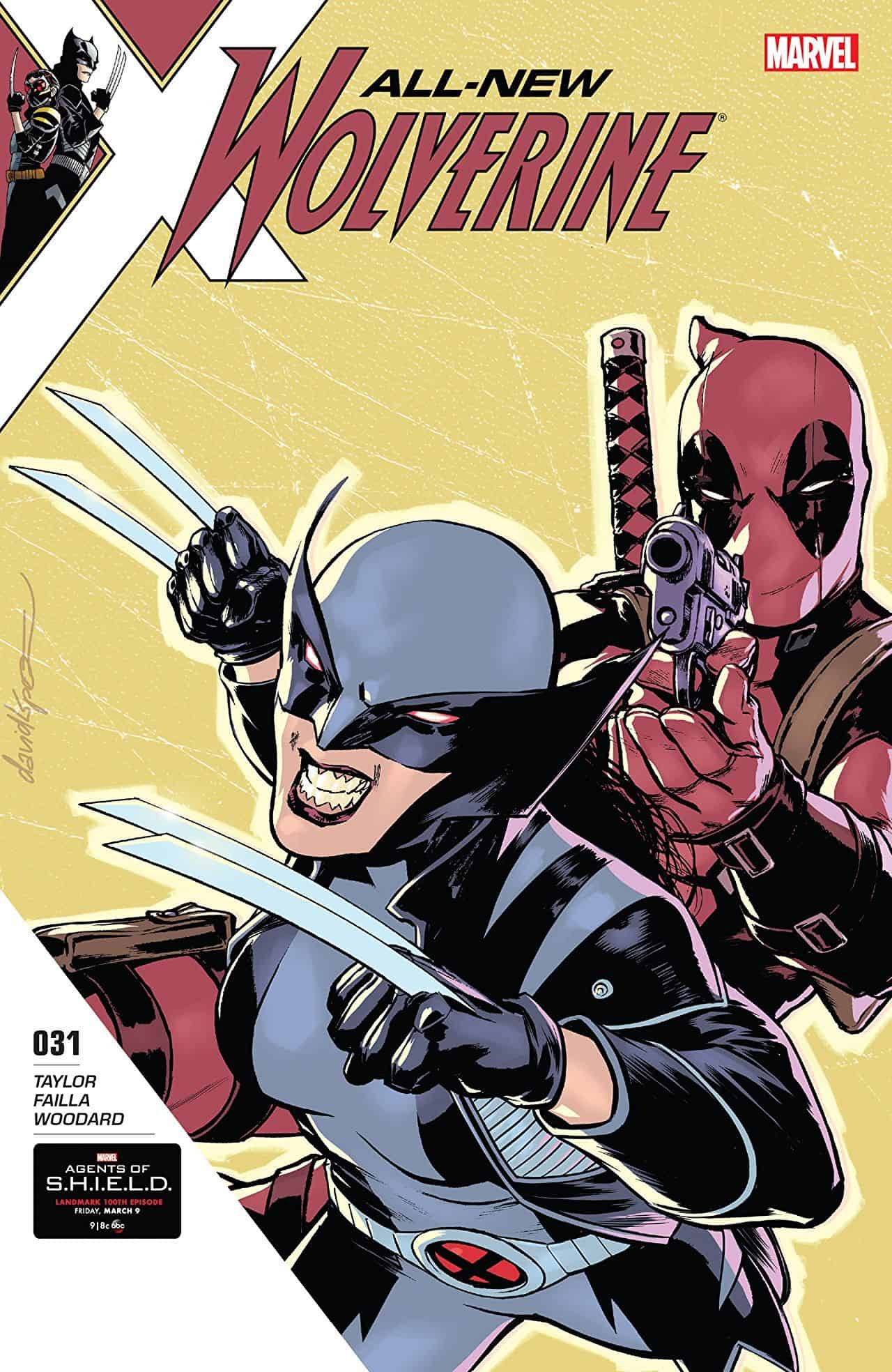 All-New Wolverine and Honey Badger infiltrated the hideout of the Orphans of X. They were able to revive, Old Man Logan, Daken, Sabretooth and Lady Deathstrike. They were able to gather some information from one of the members of the Orphans of X. All-New Wolverine then decided that she will handle the matter without any killing, therefore she told Sabretooth and Lady Deathstrike that they can now leave, while asked assistance with Old Man Logan, Daken, and Honey Badger. She instructed them that she had a plan, but informed them to stay hidden and to not act whatever happens. All-New Wolverine then wore the armor Murumasa created for her and faced the Orphans of X. The Orphans attacked and shot her with all their Murmuasa infused bullets, but the armor was able to deflect and unharmed her. She then told them that she was also a victim like them, used, abused and lost loved ones from the same people responsible of killing and causing problems to the lives of the Orphans of X. All-New Wolverine started stripping the armor away exposing herself, and exposing Henry Sutter’s past. Henry shot Laura Kinney multiple times for his disgust of making the situation turn over to Laura’s favor. Weak and bleeding from the shots Laura offered a bargain. She told that she will hunt down the men who were responsible for creating her and Weapon X, she will not kill them but instead, she will give them the proper punishment to serve Justice, as long as they will stop harming Laura and her family. The Orphans of X were skeptical but had a meeting to decide if they would accept Laura’s offer. After a few hours, Laura was still recovering from her wounds, Amber came out from the meeting and approached Daken regarding the decision. Amber told Daken that the Orphans of X had agreed to accept Laura’s offer. Daken then asked her that since the Orphans of X had cloned Laura’s mother. He assumed that they had kept her body as well. Amber confirmed that they had Sarah Kinney’s body. Daken then requested if they could get it from them since Laura deserved more than seeing her mother die and going missing multiple times. Days later we see Laura surrounded by the people she considered as family and buried Sarah Kinney’s body properly.

In their home at an apartment in Roosevelt Island, Laura Kinney and Gabby caught Jonathan the Wolverine chew on a wooden pelican statue. Laura suggested that Gabby take Jonathan for a walk outside. Gabby, skeptical answered that maybe Jonathan didn’t need a walk. Laura then had Jonathan wear a universal communicator which they got from Rocket Raccoon. Jonathan then spoke and told the ladies that he wanted to walk outside.

While walking around, Jonathan caught a familiar scent that enraged him causing him to run and dragged Gabby around. Jonathan dragged Gabby all the way to locate the scent which led them to the place where Jonathan and his family were experimented on. Gabby then decided to contact his friend Deadpool and asked him if he was available to help her and Jonathan do something “illegal.” 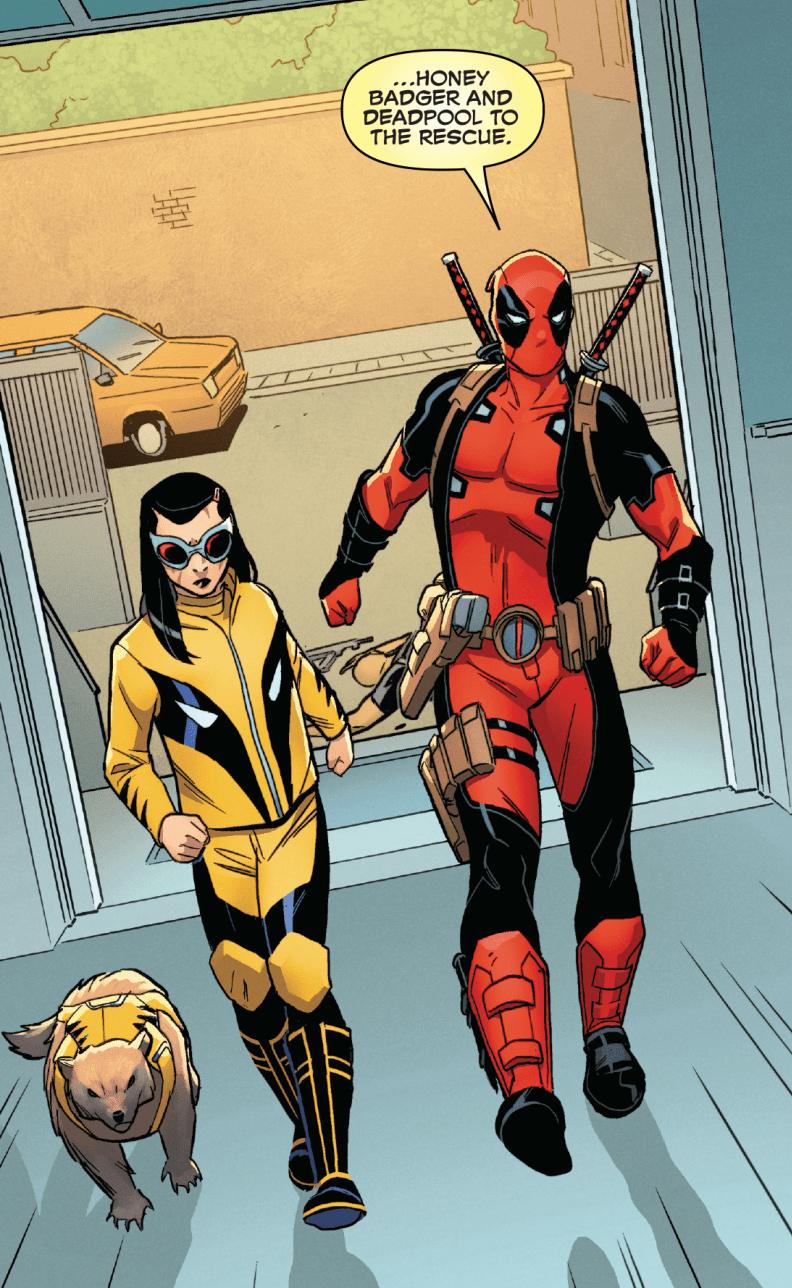 Later, Deadpool met up with Gabby and Jonathan. Deadpool asked Gabby the details and she explained to him that the building they are looking at was the place where Jonathan was experimented on. She told him that she wanted to save the rest of the animals that were left there. All-New Wolverine was then trying to contact Gabby, but she decided not to pick it up and they went on with their objective.

Deadpool and Honey Badger were able to disarm a couple of security and armed men. They were able to infiltrate the facility without any problem. They then entered the computer room and Deadpool was able to open the cages of the animals to make it more convenient for them. When they entered the room where the animals were kept, they were all surprised to see that the animals were all reanimated into zombies. Adorable but freaky, the zombified animals attacked Deadpool, Honey Badger, and Jonathan. The trio fought their way to find the person responsible for this. 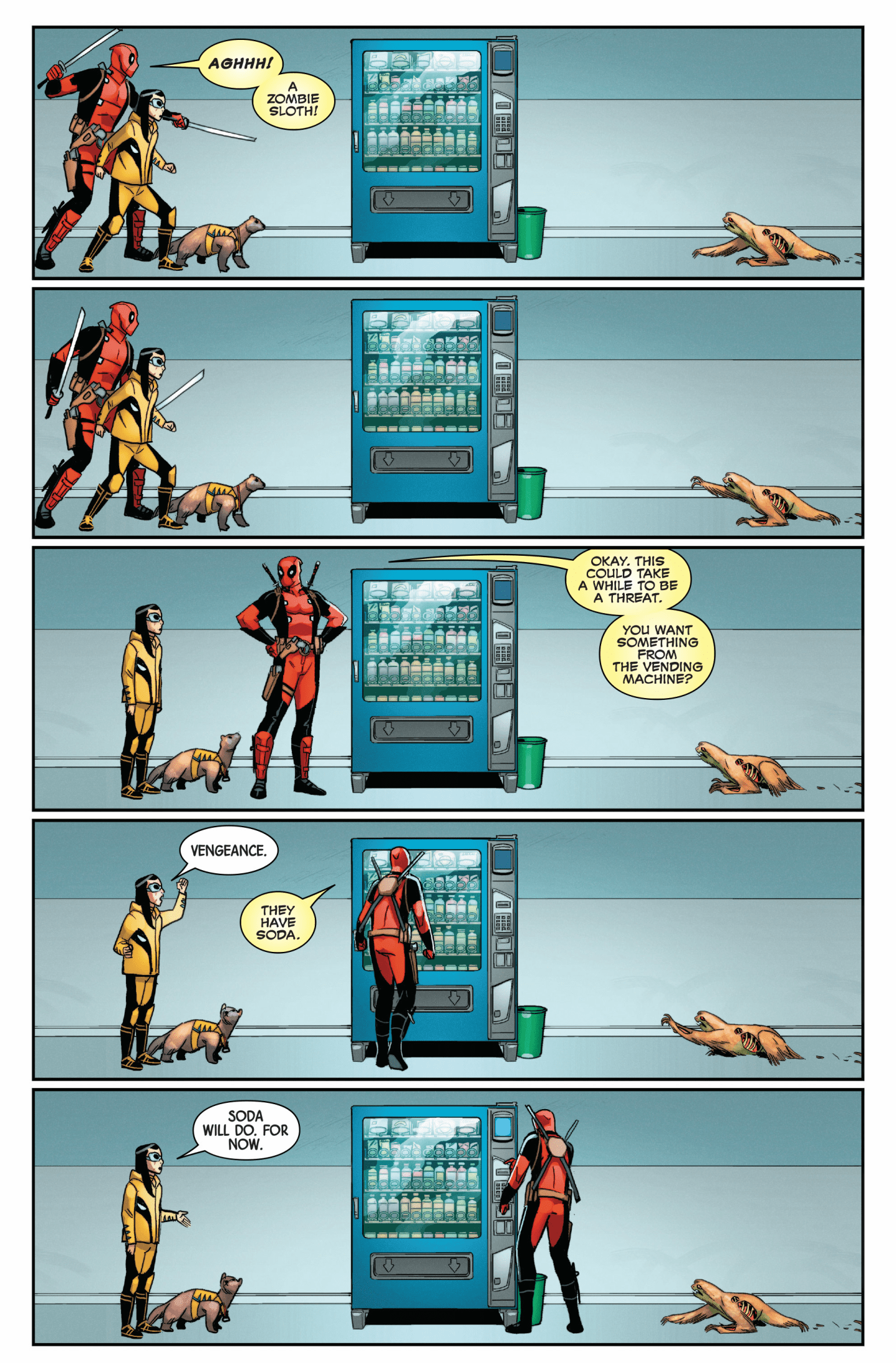 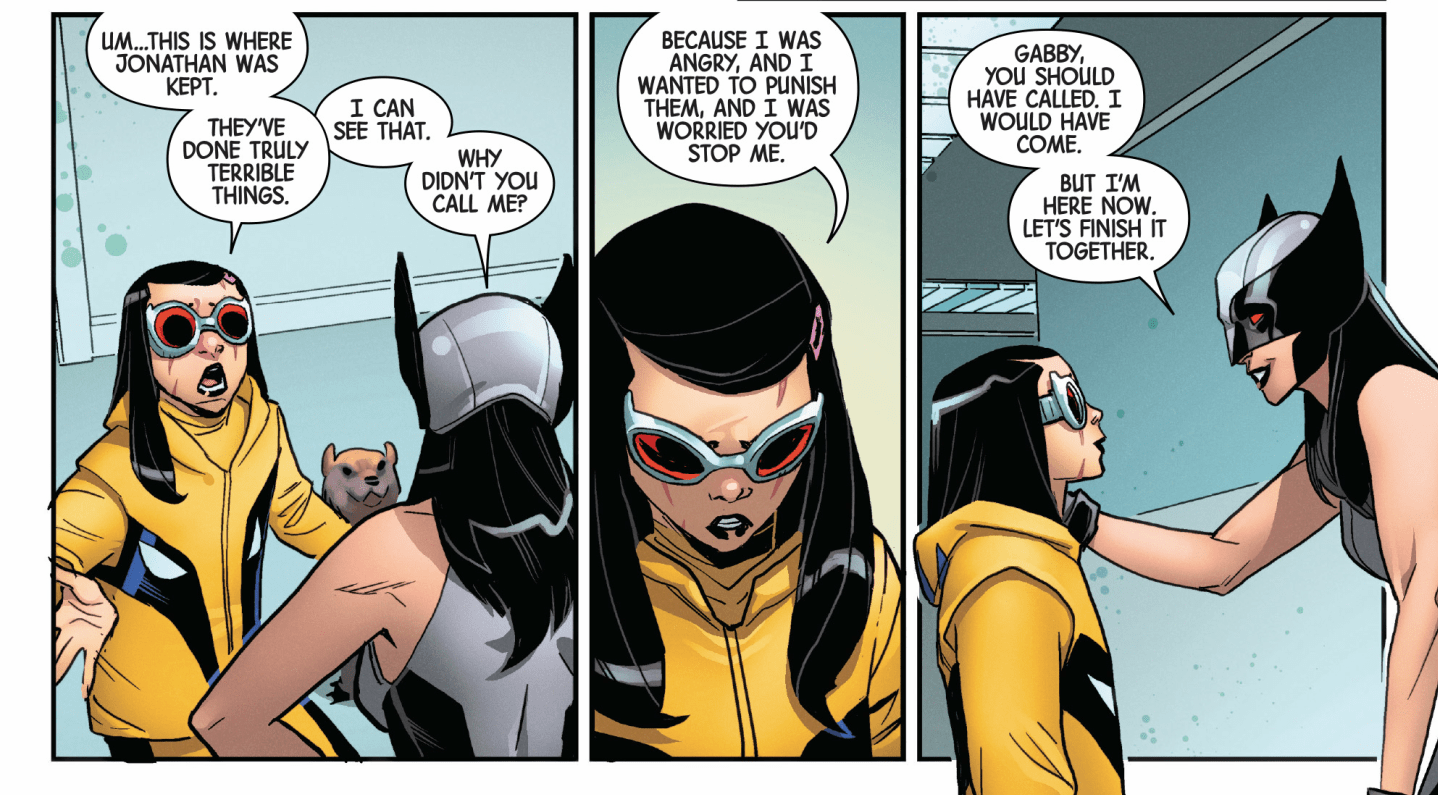 The group was then met by Dr. Boreland who pointed a shotgun at them commanding them to drop on the floor. All-New Wolverine asked him if he was responsible for turning the animals into zombies. Dr. Boreland did not deny the fact he experimented and turn the animals into Zombies. Deadpool noticed a door with a vandal writing “the Pit,” behind Dr. Boreland. He opened it and exposed that there was a pit full of zombified wolverines. Jonathan confirmed that it was his family. They then noticed that there were no computers, cameras or any data. All-New Wolverine who was disgusted concluded that this was experimentation but for sport. Dr. Boreland tried to shoot at Jonathan, but All-New Wolverine was able to slice of his shotgun. Jonathan was in raged by this and tried to approach the evil scientist who was backing away from him.  Dr. Boreland reached the tip of the pit and fell. Jonathan’s zombified family then killed the evil scientist off-screen. 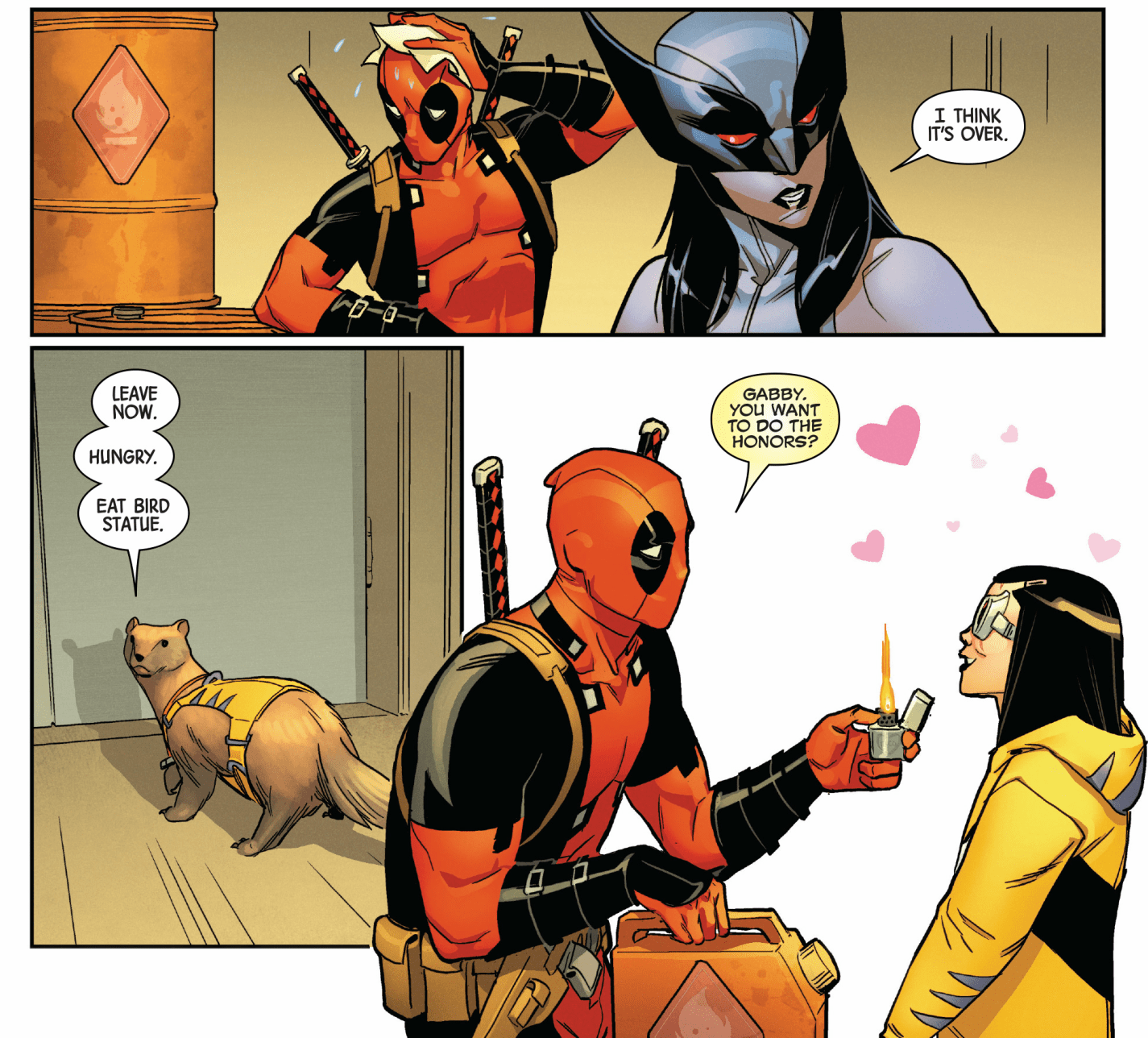 All-New Wolverine assessed the situation and thought that it was now over. Deadpool then hands over a lighter and gasoline to Honey Badger. The group then left the building burning. They then went somewhere nearby to watch the building engulfed in flames. Jonathan then told them via his communicator that although his old family was now gone, he had gained a new one with All-New Wolverine and Honey Badger. Deadpool then addressed how Jonathan was such a big softie while Jonathan threatened back that he will eat a piece of Deadpool while he sleeps. The four then continued watching the building burned down.

This issue is most probably written as a filler for the upcoming arc. After that epic Orphans of X arc, Tom Taylor slows the pacing a bit by adding a little highlight between Honey Badger’s friendship with Deadpool and putting Jonathan the Wolverine under the spotlight. The whole scripting was witty and very entertaining.

I also liked Marco Failla art style and interiors. I found his interiors really clean and easy to look at, plus it matched the story which was focused on Honey Badger and Jonathan. Nolan Woodard’s color was what made the art feel familiar and at home for longtime fans. Woodard was able to leave a mark with his awesome job at coloring from previous issues that even under a different penciler, you would know that it was Woodard who did the colors.

Over-all this issue was very fun. Tom Taylor still managed to deliver with this one-shot of a story, and I think it balanced out the whole theme of the All-New Wolverine series by focusing on it’s fan-favorite supporting casts.

Final Thought:
All-New Wolverine #31 is not groundbreaking like the previous arc, however, Tom Taylor was still able to write a script that is truly entertaining and witty. A fun, hilarious and a light-hearted story that also manages to balance a few action-packed scenes!