All-New Wolverine kept her promise and will help Amber, one of the Orphans of X’s leaders avenge the death of her father.  Their mission, however, involved terrible Hawaiian shirts!!! 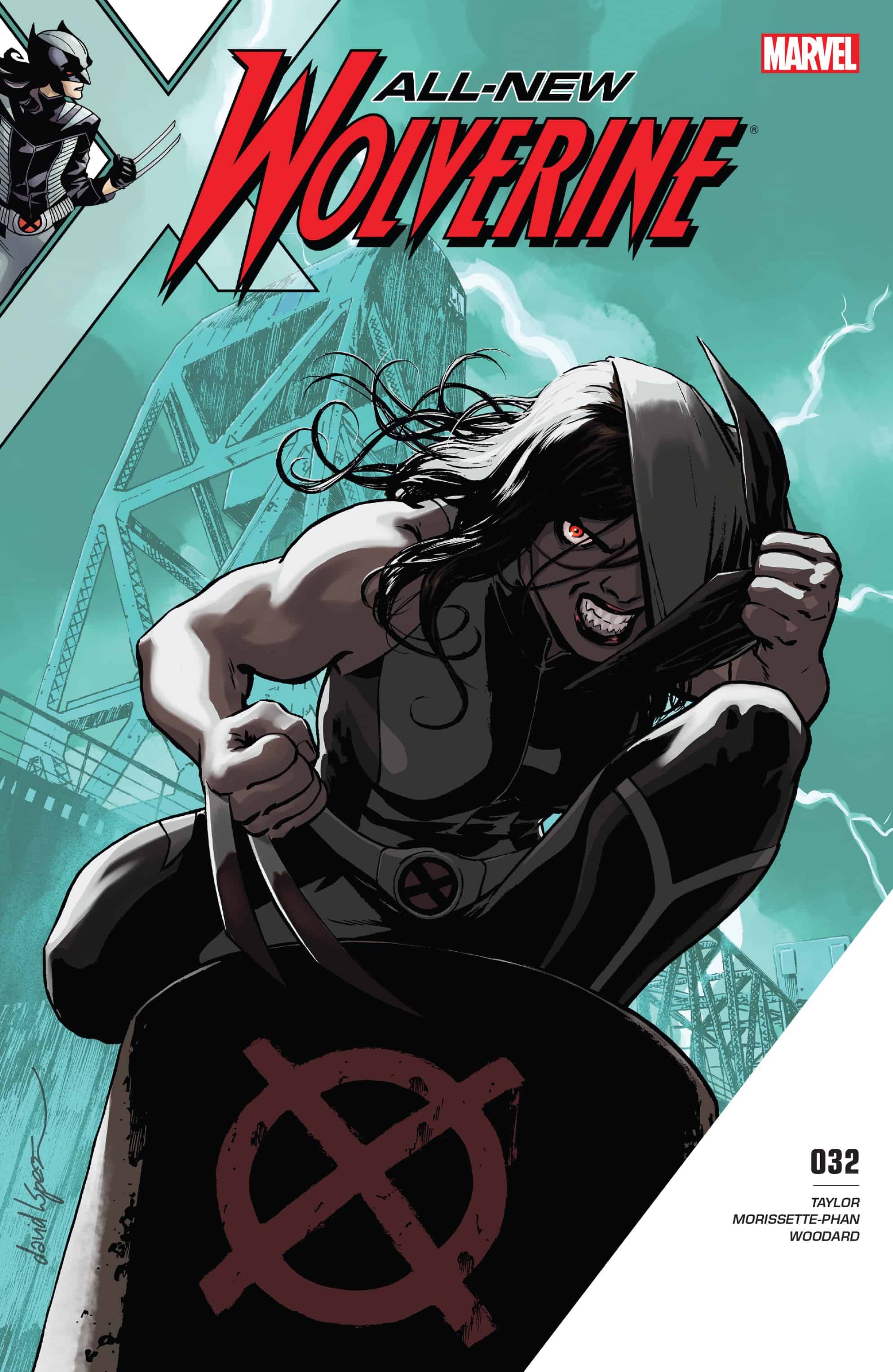 Honey Badger and Jonathan with the help of Deadpool infiltrated the laboratory responsible for experimenting on Jonathan the wolverine. They discovered that the lab had turned animals into Zombies and fought their way through. Meanwhile, All-New Wolverine tracked down Gabby inside the building. She eventually found Honey Badger and Deadpool killing off little undead furry animals. All-New Wolverine asked Gabby why she hasn’t called for her help. Honey Badger responded that it was because she was angry, wanted to serve justice for Jonathan and at the same time afraid that Laura wouldn’t support her. All-New Wolverine denied that assumption and told Honey Badger she was here now and that they would now finish this together.

They were then threatened by Dr. Boreland, who was revealed to be the one responsible for turning the animals into zombies. Deadpool found and opened the door behind the evil scientist revealing a pit full of undead wolverines who were Jonathan’s family. All-New Wolverine and Deadpool also realized that the scientist was not doing any experimentation on the animals but was doing these horrible things for the sport. Dr. Boreland attempted to shoot at Jonathan but All-New Wolverine slashed his shotgun stopping him to harm the wolverine. Jonathan approached the scientist which caused him to fall behind the pit and getting killed by Jonathan’s undead family. The group then burned the building down as they watched it all together somewhere nearby.

Two flashbacks were shown, both for Laura during her time at the facility that created her and Amber’s childhood memories with her father. Both, living different lives, which would intertwine in a horrible incident. Laura was unleashed to kill a senator, presidential candidate Johnson as part of the facility’s trial demonstration for their bidders. Unfortunately, Amber’s father was on his first day on the job as the senator’s bodyguards during that incident and was one of Laura’s victims. 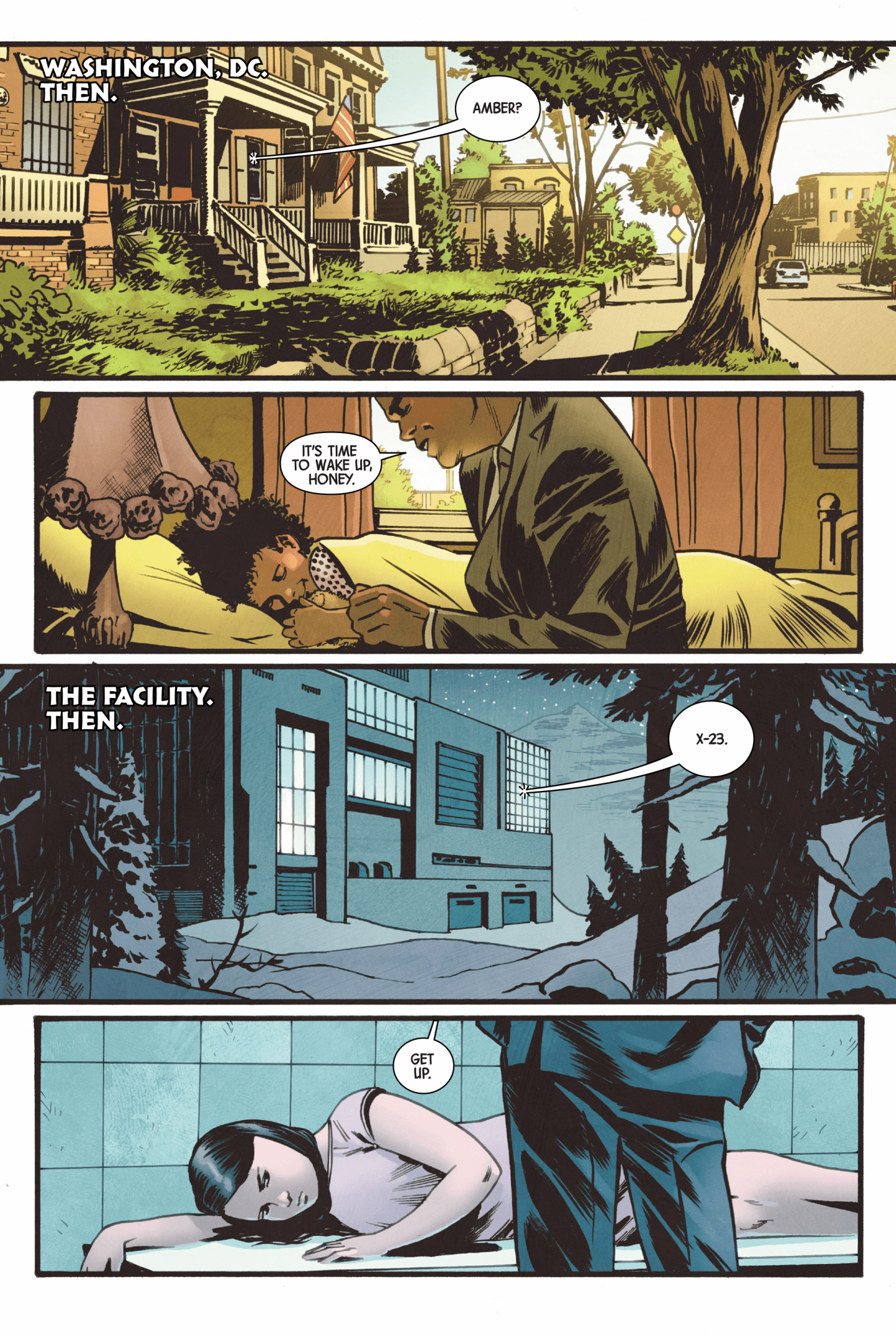 Now, Laura dropped by and visited Amber’s home. She informed her that she had found the person responsible for creating her and killing Amber’s father at the same time. She told Amber that Henry Sutter’s father had a meeting with Chad Newman. A businessman who is secretly a neo-nazi. After the assassination, Newman fled the country and opened up a resort in Vanuatu. Laura planned to extradite Newman herself. Amber insisted to come along. Laura asked if Amber had intentions to kill Newman. Amber answered that she will try not to kill him but she will surely harm him. Laura agreed and joked that Amber should pack extra large Nazi-stomping boots.

In Vanuatu, the two unpacked their luggage and Amber joked about All-New Wolverine wearing a horrible Hawaiian shirt. Laura hands another horrible Hawaiian shirt for Amber to wear. Laura told her she’ll be able to locate Newman, but the challenging part was getting him out without any casualties. She also added that Newman was heavily surrounded by bodyguards. Laura then told Amber she was leaving to make some final arrangements for their exit. They agreed to meet up the bar later. 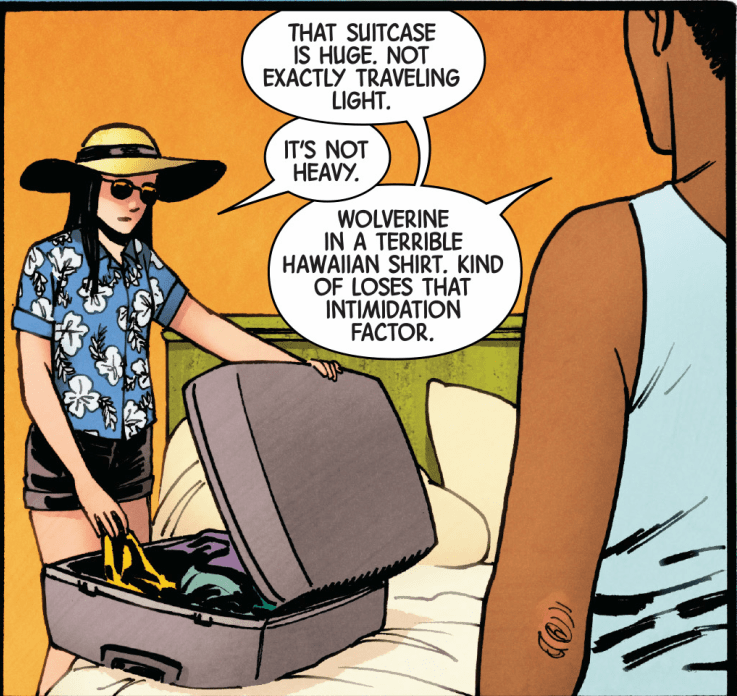 Amber went to the bar as planned but was approached by men in suits and insisted she came with them. Amber declined and fought back but one of the men pointed a gun at her. Later, Laura arrived at the bar and asked one of the bartenders if they had seen a friend of hers that she was planning to meet up. The bartender told Laura that he hasn’t seen anyone drop by the bar. Laura was skeptical and used her heightened smell, she smelt blood mixed with mangoes and decided to follow it. 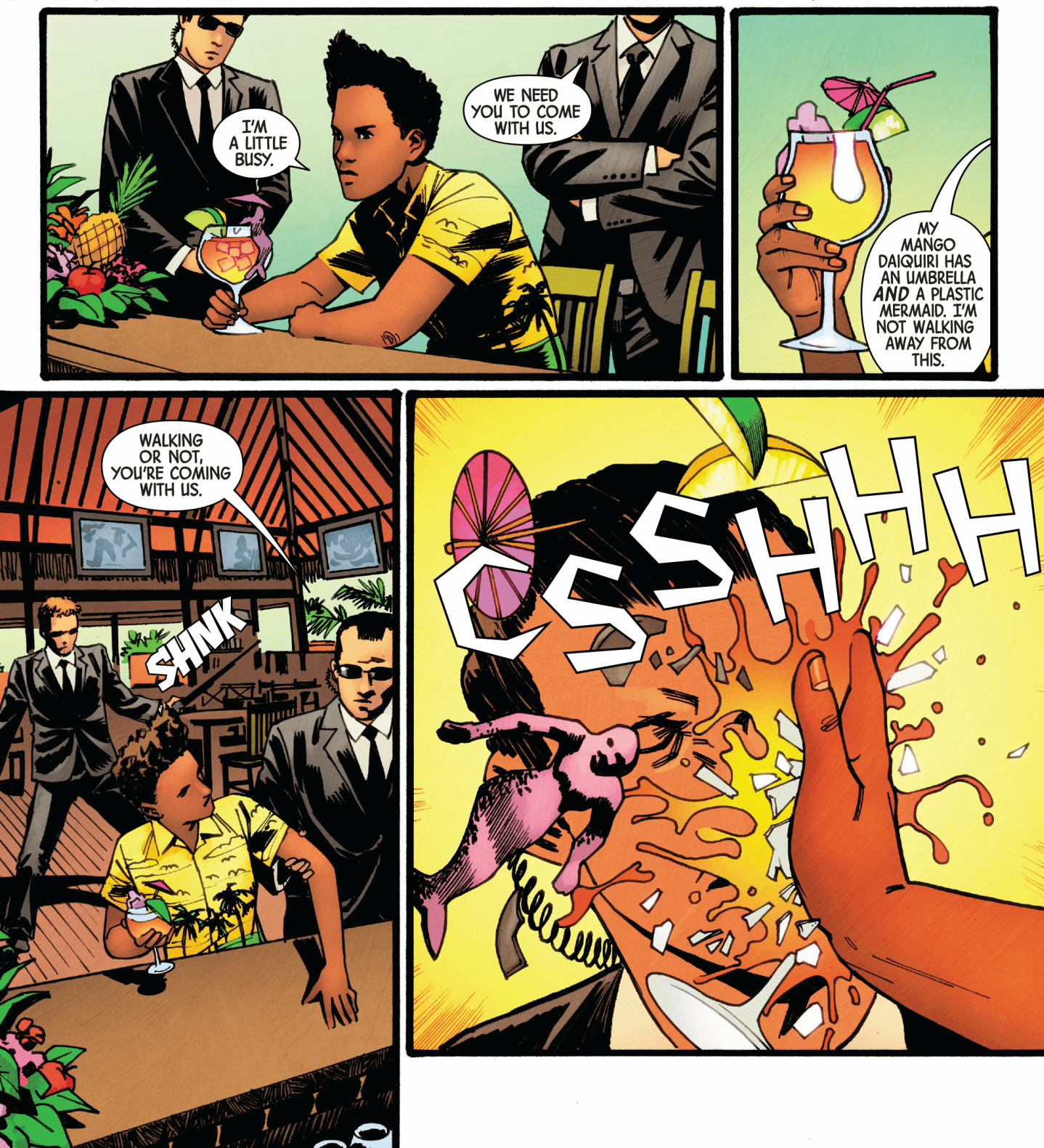 She then infiltrated the location of where Amber was being taken as a captive. She found Chad Newman pointing a gun at Amber who sat on a chair. Newman commented about how Laura became weak by being concerned for other people like Amber. He also praised Laura for finally figuring out he was responsible for her and hunt him down for revenge. Amber then commented that it wasn’t Laura who wanted revenge and revealed it was her for controlling Laura to kill his father. She then shocked him unconscious while Laura knocked out Newman’s bodyguards. 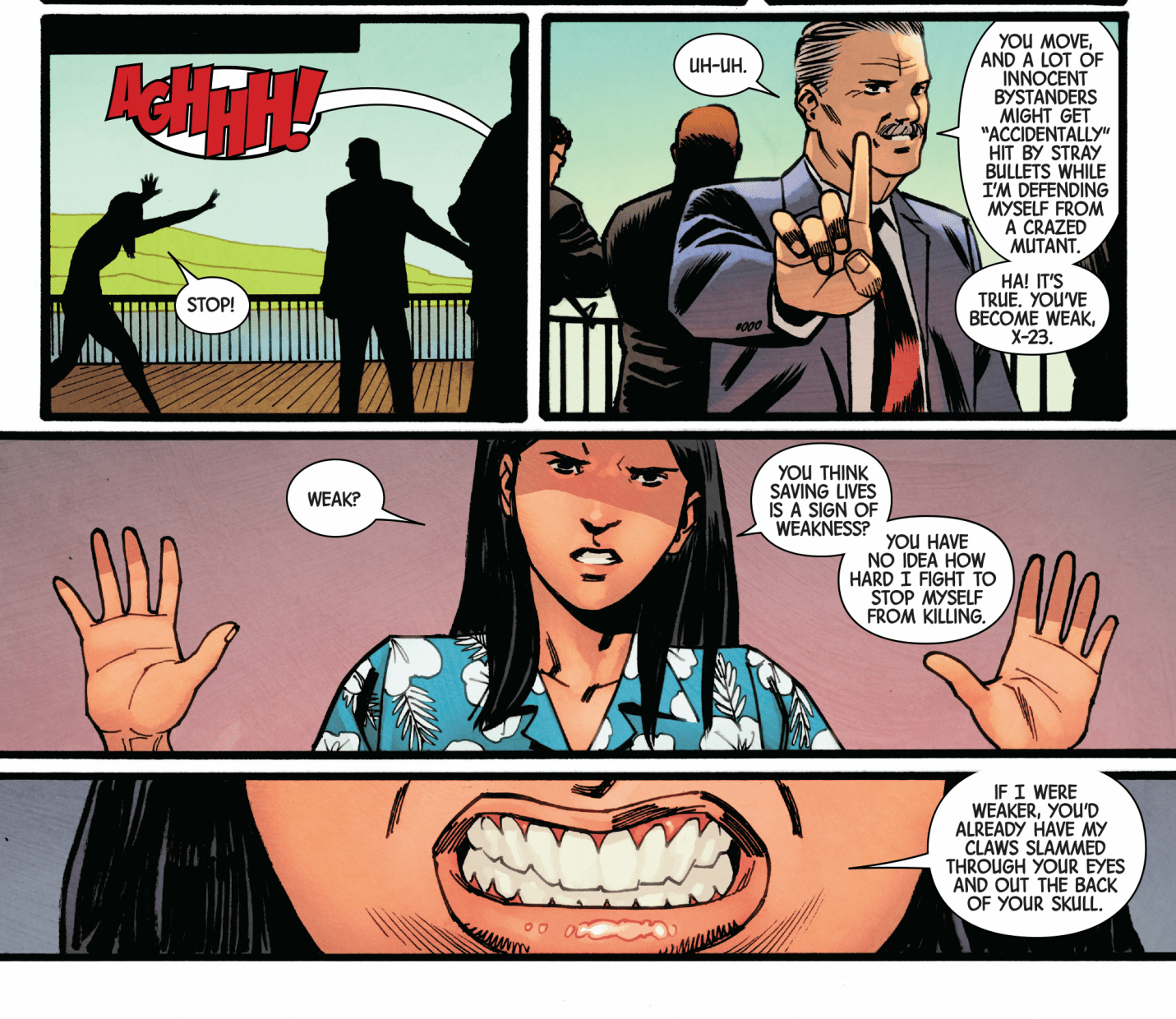 They then squeezed in Newman inside Laura’s massive luggage. Threw the luggage on a jet boat and rode to exit the scene. Laura then gave her thanks to Amber for allowing her to help the Orphans of X avenge the loss of their loved ones. Amber then pulled out her boots and the two then brought Newman somewhere unknown to him. As soon as they opened up the luggage, Newman saw them as little girls wearing boots that were about to harm him.

A Great issue in my opinion. Tom Taylor is starting to show us the aftermath of the events after Orphans of X arc. All-New Wolverine kept her promise by helping out Amber, one of the leaders behind Orphans of X. The chemistry between these two ladies was handled pretty well. As usual, Taylor added some witty exchanges to in humor to balance the serious tone of the story. It was also very interesting to see both of these young ladies’ past side by side and the difference of how they were brought up. The tragic, cruel and inhumane childhood of Laura and the well-loved and nurturing relationship between Amber and her father. It tries to make the readers realize and see why these ladies are who or what they’ve become now. What I thought was interesting was that these flashbacks were kind of highlighting and re-focusing one of X-23’s main subject which is still an ongoing global issue in our real lives, Laura’s childhood reflected child trafficking. It sad to know that this issue really exists and that Taylor and Morissette-Phan made a way to remind me of that.

Morissette-Phan’s art was wonderful and perfect for the mood of the story in my opinion. The art was so wonderfully drawn and was very expressive. The only thing I thought could be a potential con with this book was Woodard experimenting with his highly contested coloring. It does still look great and the quality top notch. I just thought that some might not enjoy it compared to his previous work which usually gave you a warm ambiance.

It was great to see All-New Wolverine keeping her word after the events during Orphans of X. It was more entertaining to see Amber, helping Laura out. This book was both entertaining and satisfying, especially if you had read the previous arc. Tom Taylor really wants to keep his stories consistent and satisfying!