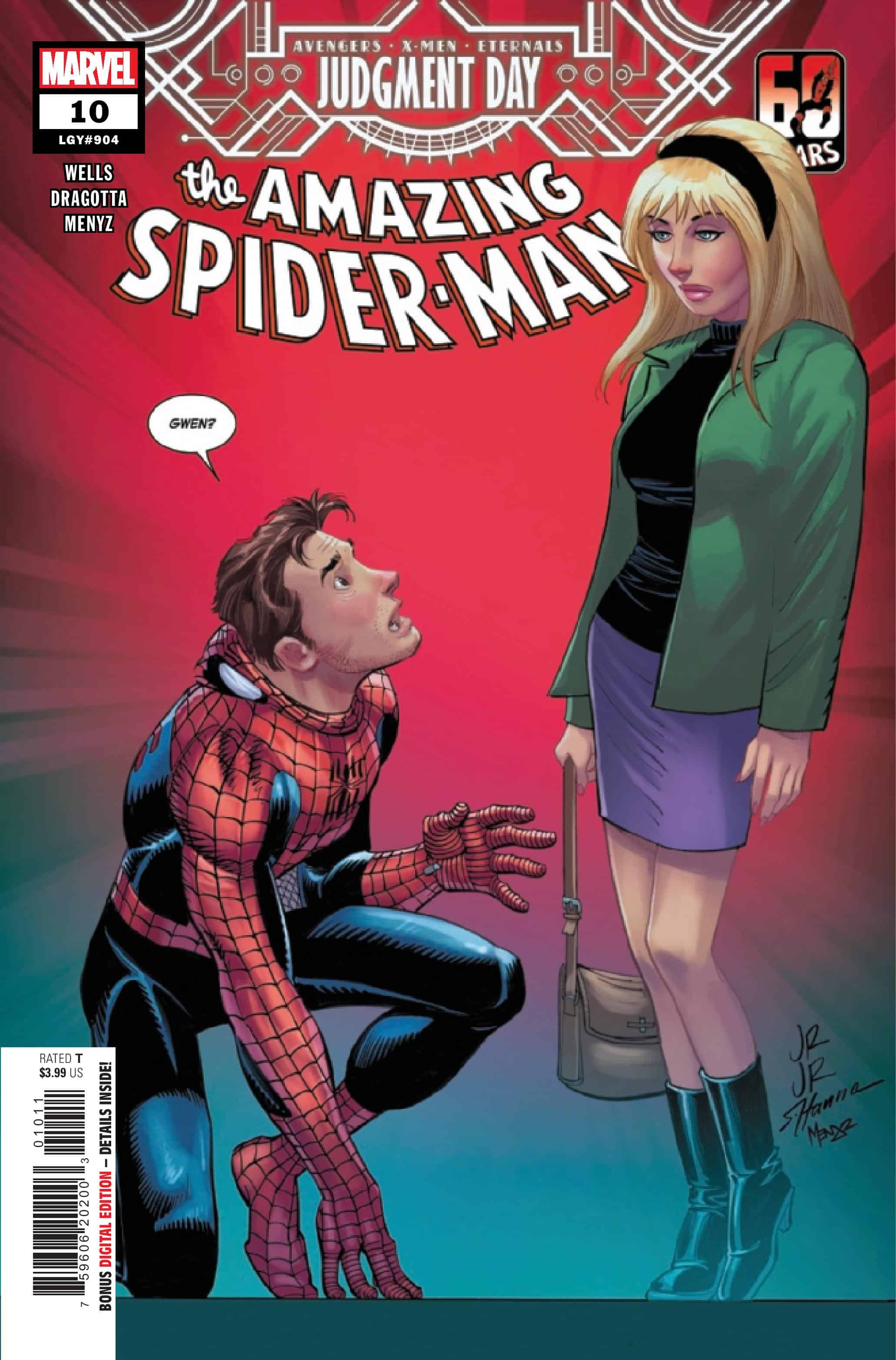 A.X.E.: JUDGMENT DAY TIE-IN! It's time for Spider-Man to be judged, and I think we all know which moment in Spidey's history is going to weigh heavily on the proceedings. You don't want to miss this very special issue that might just break your heart all over again

Amazing Spider-Man #10 – written by Zeb Wells, with art by guest penciler Nick Dragotta, colors from Marcio Menyz, and letters by VC’s Joe Caramagna – breaks from last issue’s tie-in with the Hellfire Gala, and instead ties into the ongoing Judgment Day event from Kieron Gillen and Valerio Schiti. In the simplest terms, which this does an excellent job recapping, the Avengers and Eternals brought a new Celestial, the Progenitor, to life that is judging every sentient being on Earth to determine if they’re worthy as a species. Most of these ancillary tie-ins like this issue are focusing on characters being judged by the Progenitor.

This issue doesn’t break that trend, and focuses on a day in Peter’s life as he’s judged, the celestial taking the form of Gwen Stacy, silently observing him with a glowing eye of celestial power. Peter goes from helping Robbie pick a tux for his wedding, to having tea with Aunt May, and then fighting crime with Miles. The script then pivots to the launch of a project at Oscorp being led by intern Kamala Khan, where he snaps at Norman due to the specter of Gwen. The issue ends with Peter receiving his Judgment, and a little extra from the Progenitor, before revealing who Norman is being judged by as well.

Wells’ script does an excellent job conveying the sadness and guilt at Peter’s core, while also showing how he’s matured and pushes himself to continue with the burden. This title has been a scattershot of ideas and plots, in part due to the multiple tie-ins and crossovers it’s connected to, or setting up for the near future. This tie-in uses the strong narrative backbone Gillen established in the main Judgment Day title to focus on Peter, and his street-level view of what’s going on during a possible world-ending event, and Wells runs with the p.o.v. The issue feels like a mostly organic realization of who Peter would spend his last day on Earth with, and what he’d say to them.

It’s a weird choice that Peter doesn’t go to MJ, even after the fallout of the last issue’s Hellfire Gala tie-in. That might be another ripple effect of a publishing schedule shift, but having back-to-back tie-ins before another crossover makes it difficult to enjoy the flow of the story. Outside of this omission, the rest of the visits that Peter makes in the issue are great, specifically the ones with Miles and Jameson.

When Peter meets up with and talks with Miles, it’s a fun sequence but is bittersweet as it serves as a reminder that the two only get to share these resonant moments during world-ending events or multiverse-spanning crossovers. Afterward, Peter goes to see Johan, and it’s refreshing that the characterization for the Bugle editor has stuck since Chip Zdarsky’s time on Spectacular Spider-Man. Johan also apologizes to Robbie for large chunks of his Spider-Man continuity, working as a fun bit of exposition to remind him just how extensive Johan’s history is.

There’s this odd push of Gwen and her legacy in Peter’s life that looms over recent Spider-Man comics, popping up in everything from J. Michael Straczynski’s run, to the Clone Conspiracy era of Dan Slott’s, to the retcon-driven story in the previous run from Nick Spencer. While this issue continues that trend of grappling with Gwen’s legacy, it does so in a way that’s closer to the seminal Gwen legacy story, Spider-Man: Blue (Jeph Loeb and Time Sale). Both that title and this issue give the Gwen character a shred of agency but for the most part, the character is a phantom that lingers over a current-day Peter, who’s learned to move on. It’s the notion that he carries her death with him, but he’s opened up since and let the others in. Blue arguably makes it more meaningful through his relationship with MJ, compared to the connection the current run makes between Peter and Norman.

Dragotta captures a weary, beaten-down Peter well, giving the vigilante a long face that seems to sag as the day goes on. His art is also perfect for this story like it was made for thousand-mile stares and regret. It doesn’t matter if Peter’s meeting with Aunt May, Robbie, Jameson, or Miles, there’s an inherent sadness in Dragotta’s pencils that screams Peter’s mental state for the last ten or so years. There are blips of action that intercut close-ups of sadness, and there’s equally great, fluid, and dynamic in a way that harkens to say a Ditko style for Spider-Man. It makes the book a breeze to read, contrasting but not distracting from the usual style of Romita Jr.’s work on the title so far.

Menyz’ coloring works to help give the issue a feeling of connectivity to the rest of the series, while also matching the palette from the main Judgment Day title. It’s an excellent decision that plants a foot into each title and makes it clear where this issue falls without any exposition needed. The reds of the ??Progenitor’s Celestial energy, often used in backgrounds to illustrate the moments of judgment, pop in this context, feeling in a whole other league compared to say the reds of Peter or Miles’s costumes. That color also lends itself to ensuring that Dragotta’s art feels in line with Romita Jr.’s signature style for the series, making every page feel like this specific moment of Spider-Man’s history, even as the past is continuously dragged up.

Amazing Spider-Man #10 is an excellent use of the event tie-in structuring, working off a structure set to dig into the Peter Parker character while advancing certain plotlines from the main title, right before it moves into its next crossover. Dragotta’s art was the perfect fit for a melancholy, reflective story that deals with a sense of longing and regret, playing up the physical aspects of Peter to convey the emotion onto the page. It’s hard to say this close-up, but with time, this issue may be spoken of in the same breath as Spider-Man: Blue when discussing the legacy of Gwen Stacy.

The Amazing Spider-Man #10: A Ghost Story