Amazing Spider-Man #14: Jeanine’s Got a Goblin 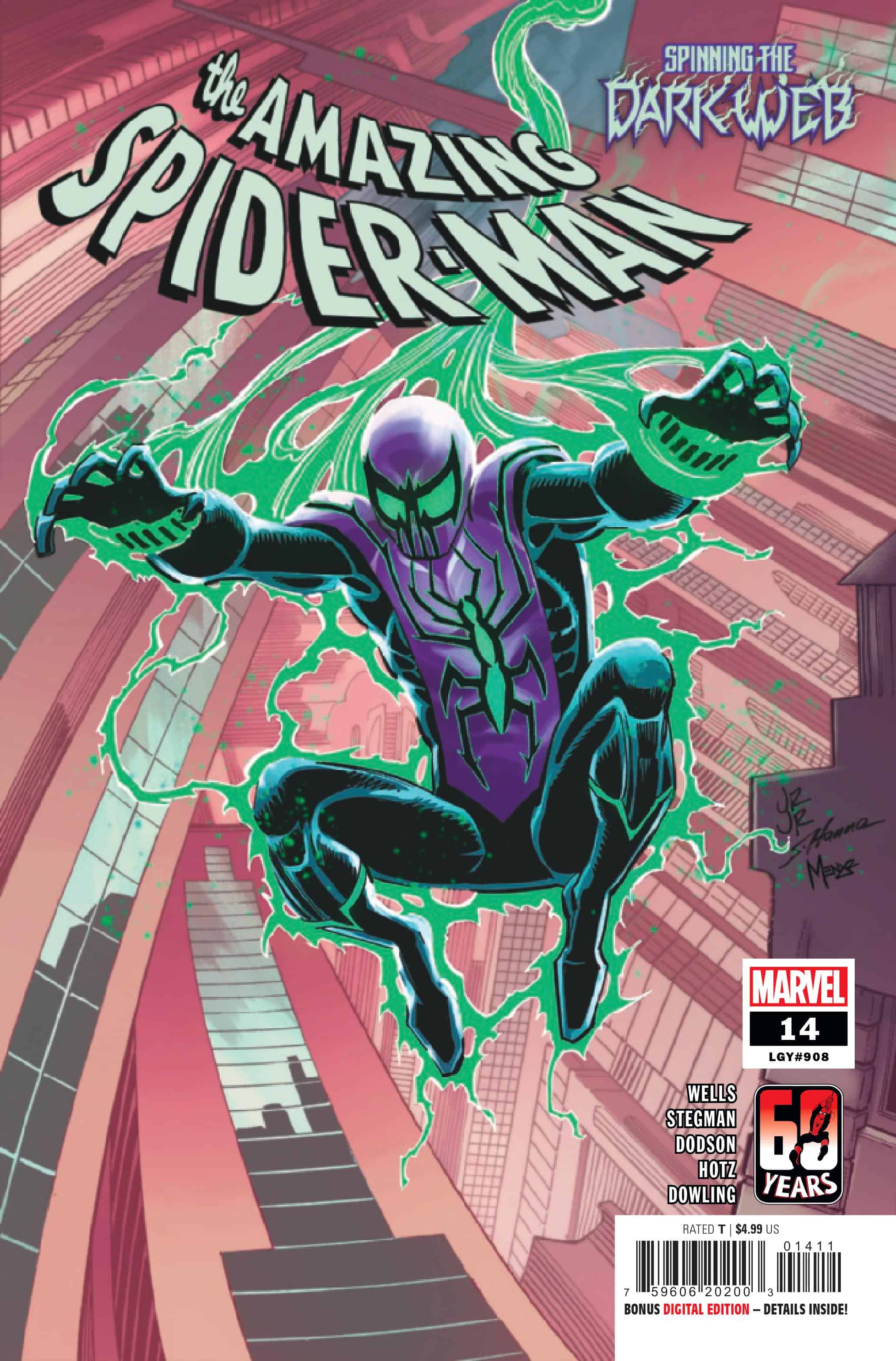 “DARK WEB” PRELUDE! We haven’t seen Chasm since AMAZING SPIDER-MAN #894 and the FCBD issue, but that doesn’t mean he hasn’t been busy. Join us for this very special issue featuring Spidey’s most dangerous new villain as well as the Goblin Queen and a BRAND-NEW villain that you won’t believe.

The Amazing Spider-Man #14 which serves as a prelude to the Dark Web storyline, is split into four sections represented by the seasons with separate artistic teams. Spring is drawn by Michael Dowling with colors by Richard Isanove, summer pairs artist Kyle Hotz with colorist Dan Brown, fall is penciled and colored by Terry Dodson with inks from Rachel Dodson, and winter is penciled by Ryan Stegman, inked by Tim Townsend and JP Payer and colored by Matt Hollingsworth. All four stories feature letters by mainstay Spider-Man letterer VC’s Joe Caramanga. The issue pivots from Peter Parker and Hobgoblins, to detail what Ben Reilly, aka Chasm, and Janine have been up to since the end of the Beyond arc and then reveals how the alliance between Chasm and the Goblin Queen, aka Madelyne Pryor, came to be in this year’s Spider-Man FCBD special.

The issue is a concise, well-paced explanation of how the villains for this crossover connected while providing some context to plot points for the previous Amazing Spider-Man storylines. Wells’s script benefits from the additional page count, as it allows for a fleshing out of Ben and Janine’s headspace over the year. For an event focused on Chasm and the Goblin Queen, the emphasis placed on Janine and her circumstances is a change of pace to the main Spider-Man plot, which has repeatedly minimized Mary Jane after the “horrible thing” that Peter did in between Beyond and issue #1.

In the spring section, the scene of Janine at the dinner is one of the more effective moments of the issue, with her weariness and resentment toward the world on full display. That emotion carries the script and creates a strong narrative backbone that matches the energy from Chasm and Goblin Queen. It’s paid off in the fall section, as she is gifted a twisted boon from the Goblin Queen: a finger of Sym that transforms Janine into Hallows’ Eve, one of the new characters teased for the event. The moment, rendered expertly by the Dodsons, is a turning point for the issue and reveals the corruptive theme of the issue, in which these villains that have been traumatized continue the cycle and inflict their new traumas onto others.

The art teams tackle that theme, using the overlying structure of the four seasons to ensure that even as the styles radically shift, they feel in line with one another. In the case of the summer section, Hotz’s grotesque linework pairs well with Brown’s sickly colors thanks to the bulk of the section taking place in Limbo. Hotz knows how to render a disgusting-looking demon, and the sickly browns and grays of Brown’s palette sell the dismal conditions of the realm. The level of horror is off the charts with evocative imagery like the tree trunk rib cage, with the fruit of the planet being a mangled heart. Switching from the styling to the Dodsons’ more idealized pencils and ink is a jarring swift, but helps to orient the turbulence the three characters have experienced.

The coloring of the fall section, done so by Dodson, changes Limbo from a hell dimension into something more akin to a fantasy realm. It fits with the thematic core of Janine’s story, as she laments her powerless status in the overarching plot, and Madelyne forces a twisted call to adventure. The sequence of Janine pulling mask after mask off is a powerful visual choice, playing up the motif of obfuscation in both Ben’s and Janine’s lives.

The art for the other two seasons, Stegman’s winter and Dowling’s spring, hue the closest to one another, existing between the overly grotesque of summer and the idealized fall. It’s a strong choice to book-end the issues with the two styles as Dowling can ease the reader in and hone into the emotional core of Ben and Janine, thanks to the diner scene previously mentioned, while Stegman’s more bombastic pencils give the story the feeling of an official kickoff.

Even as Ben beats Peter’s debt collector to a pulp and sacrifices him for his soul, as a test run of the magic that will allow Ben to regain his memories, the art never reaches the grotesque level of Hotz. Stegman’s rendering of Ben and Madelyne’s reflections, Spider-Man and Jean Grey, is a standout page that encapsulates the core players of the crossover while showcasing the lives the villains secretly desire. This is a dynamic visual that affirms what to expect going forward and proves that there’s a strong narrative core at the center of Dark Web.

Amazing Spider-Man #14 is a promising start to Dark Web, breaking away from Spider-Man to showcase a year in the life of Chasm, Janine, and the Goblin Queen. The additional page count allows the creative teams to compress a year into four, visually distinct sections while building the emotion at the epicenter of this issue. It feels like Dark Web is the story Wells has really wanted to tell since taking over Spider-Man, and that shows on every page. Fans of Hellions and Beyond will want to pick this up, and for the most part, can skip the previous issues of Amazing.

The Amazing Spider-Man #14: Jeanine’s Got a Goblin