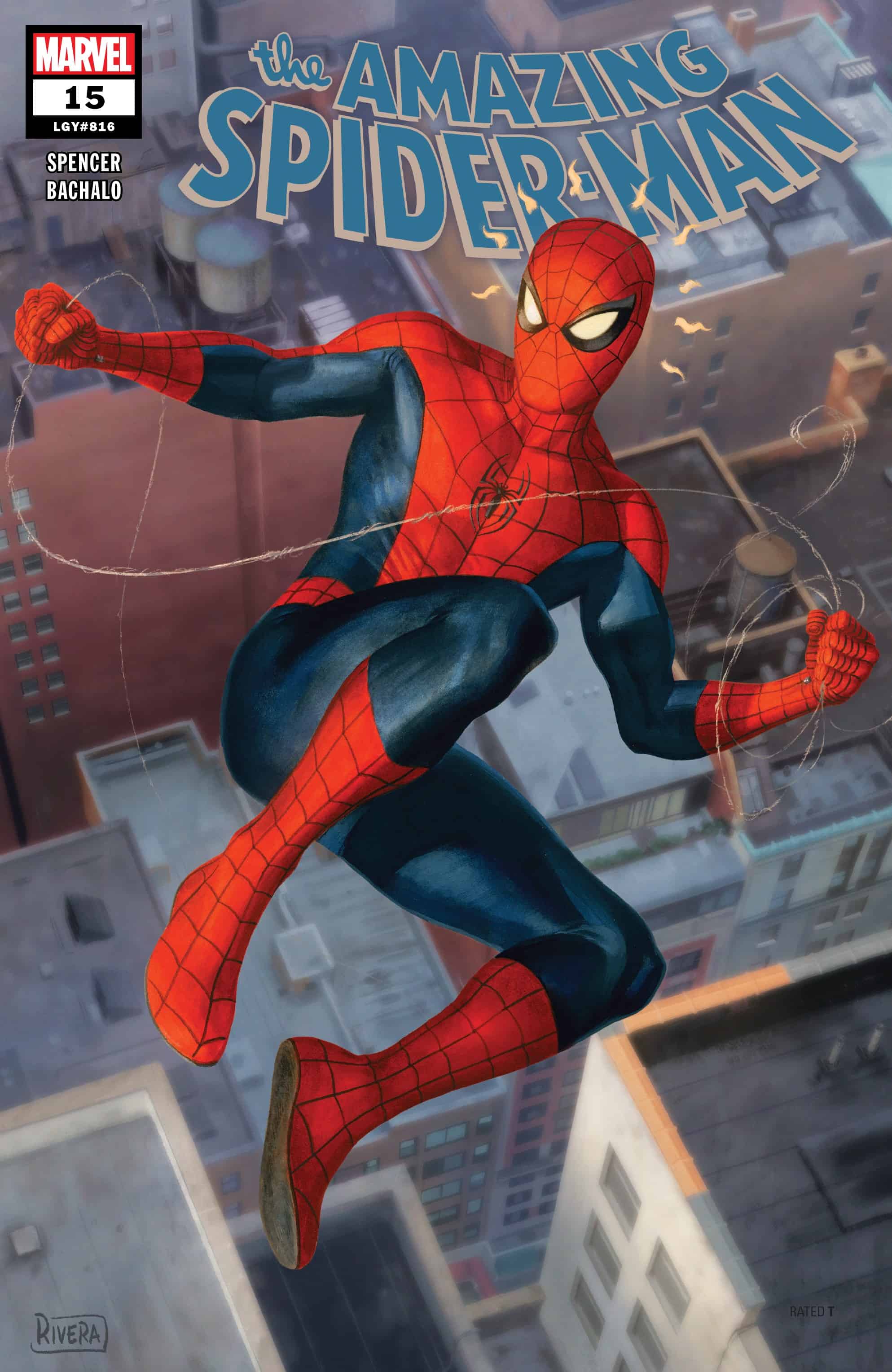 Warning: some spoilers lie ahead.

Disaster has struck! While battling to protect Rhino from being kidnapped by Taskmaster and the Black Ant, a stray shot has leveled the nearby restaurant Aunt May was dining in! 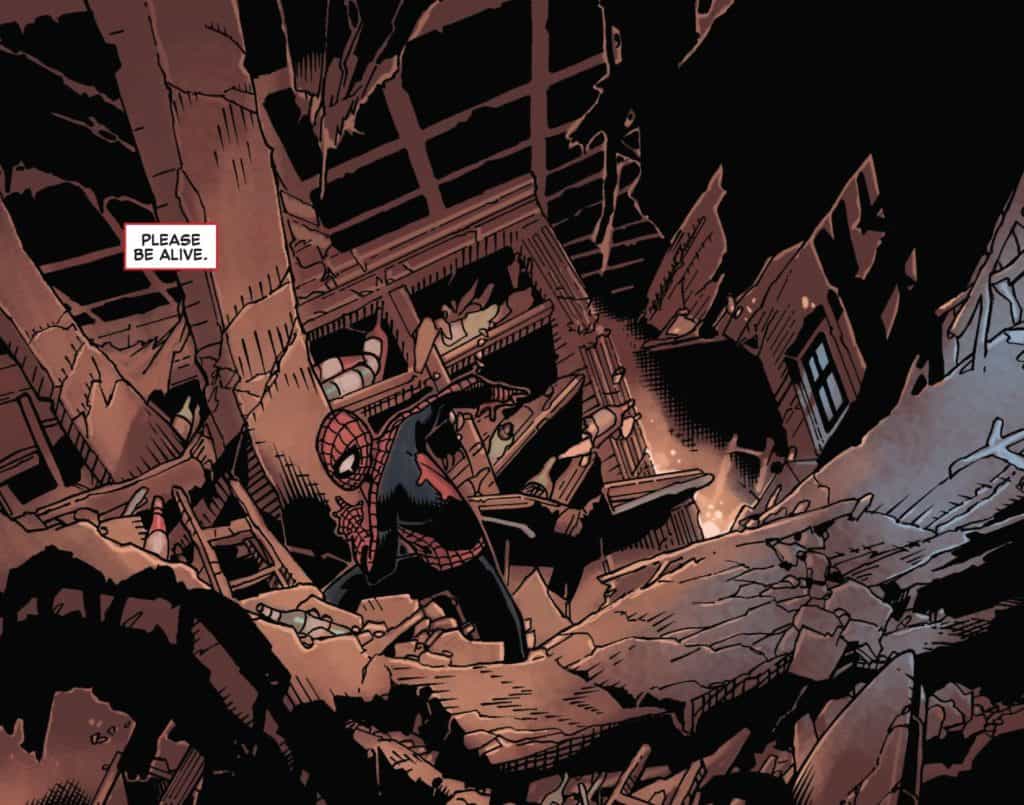 But while he's distracted, the villains abscond with Rhino as their captive... 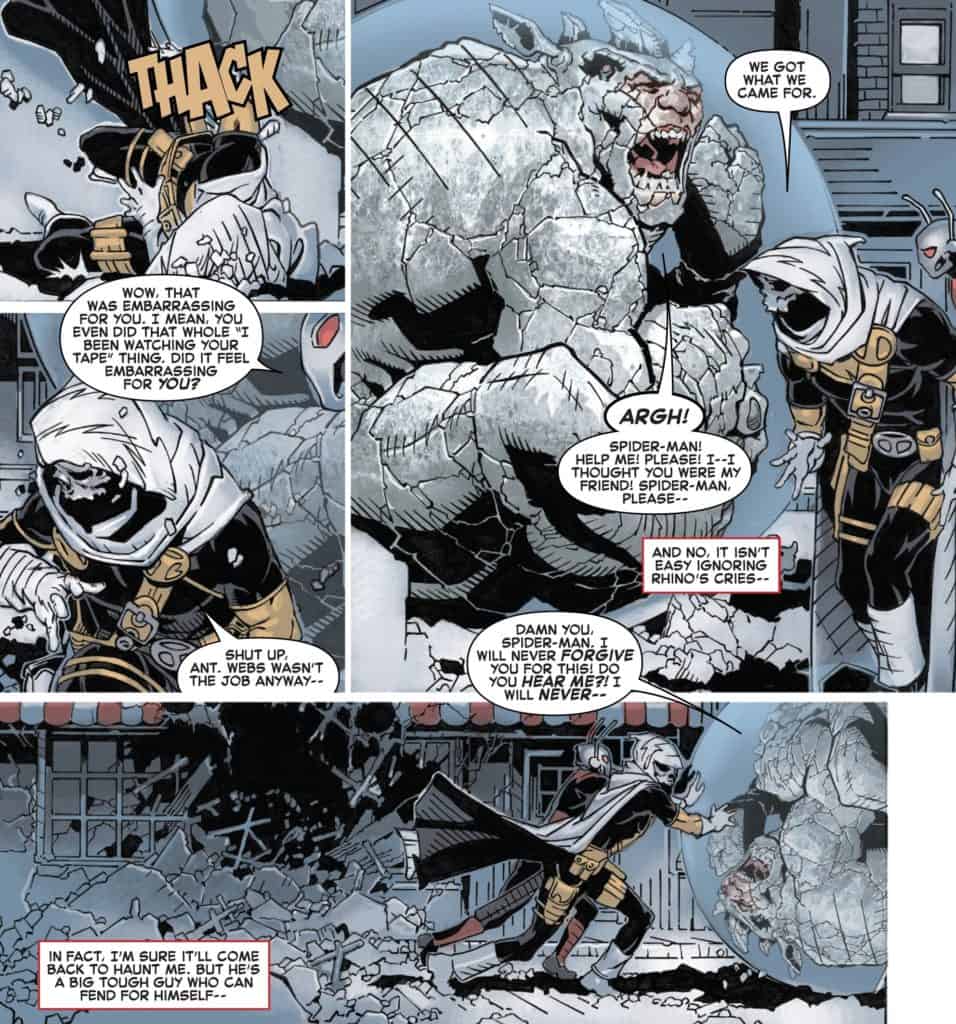 ...Spidey makes a startling discovery about the identity of the homeless man Aunt May invited to lunch with her...

...And Kraven the Hunter makes one final deal with the deadly Aracade! 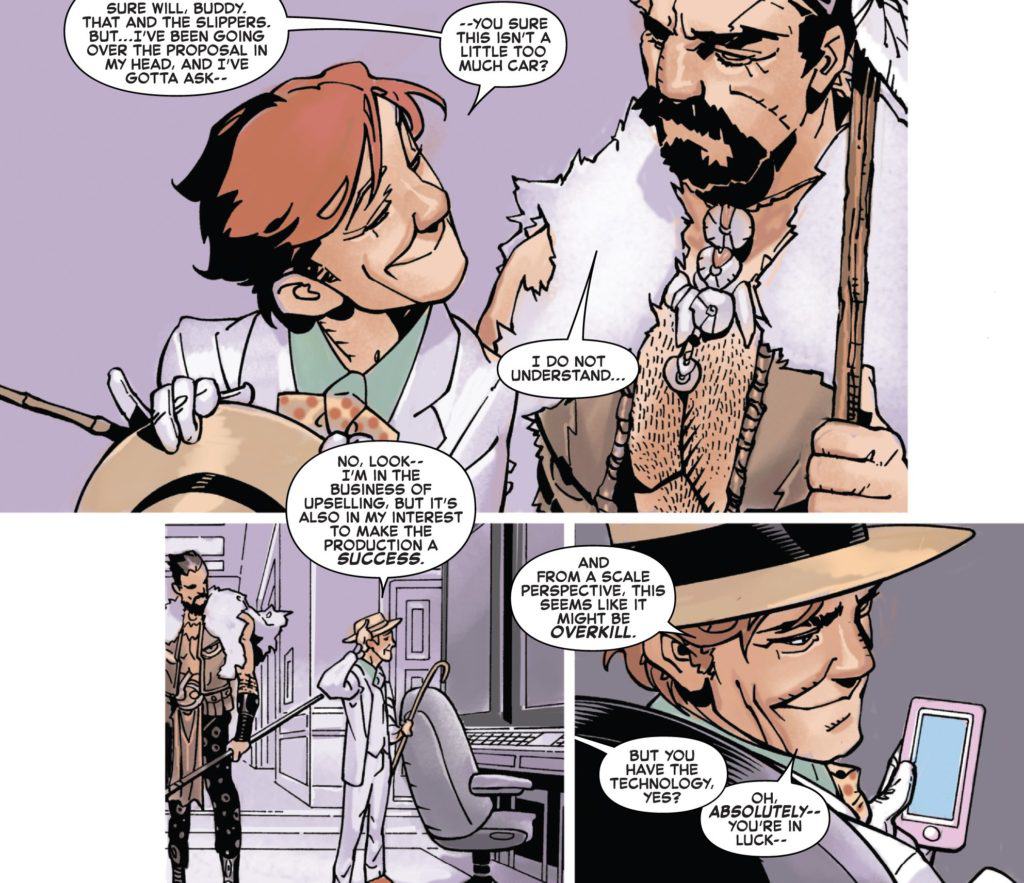 All that, PLUS Curt "the Lizard" Conner's mutated son sneaks out for an extremely public outing!

After a bit of a scattershot effort last issue, writer Nick Spencer brings it all back home and zeroes in on the crux of this two-parter; the bond between Peter Parker and his strong-willed Aunt May. May has been a lot of things over the years: perpetually on death’s door, an overbearing worrywart, actually dead, almost married to Doctor Octopus, actually married to J. Jonah Jameson’s dad… you get the point. May has had a lot of changes over the decades, but at her core, she’s always the center of Peter Parker’s universe. Despite all of the never-ending guilt he feels over Uncle Ben’s death, she’s the one who has always been his rock. 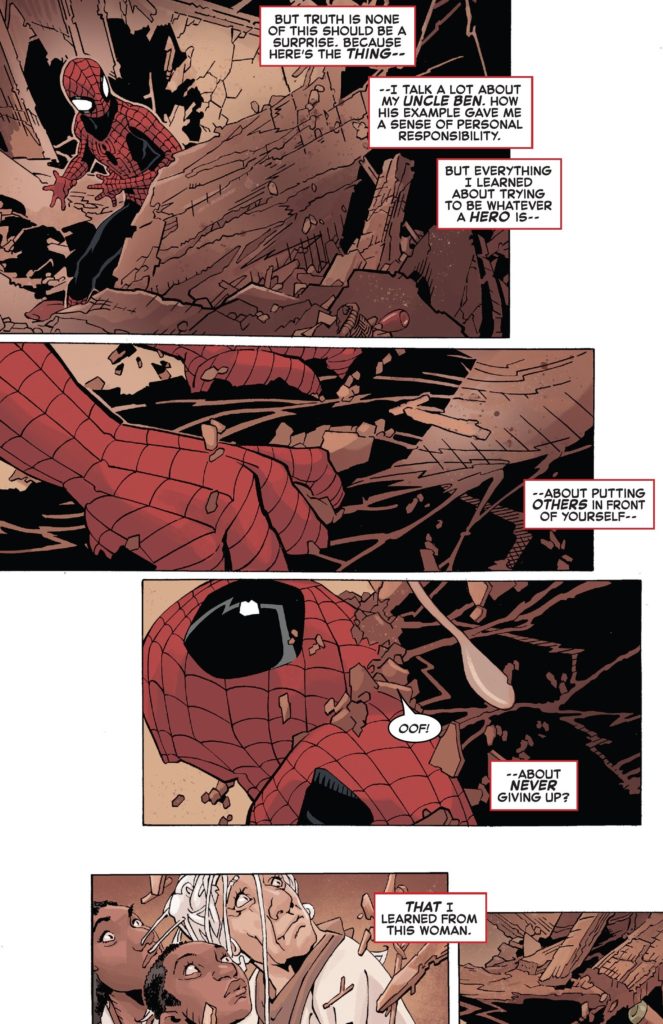 It’s a wonderful piece of character work, bolstered by May’s evolution as a character in the 21st century. Gone is the doting, fretful and frail granny of yore; in her place stands a thoroughly modern, strong and capable woman that completely shatters yesteryear’s norms of what an elderly person “should” be. (For those of you keeping score, credit generally should be given to writers J. Michael Straczynski and Brian Michael Bendis for getting that ball rolling, in both the main Marvel Universe and its Ultimate iteration, respectively, shortly after the turn of the century.) Aunt May has evolved into a determined and outgoing Woman of a Particular Age, a move that has clearly influenced the man her nephew has become; rarely is that more clearly on display than in this issue. In fact, she frankly outshines him with her innate heroism here and after all, she doesn’t have the proportionate strength, speed, and agility of a spider to rely on when it comes to saving others! 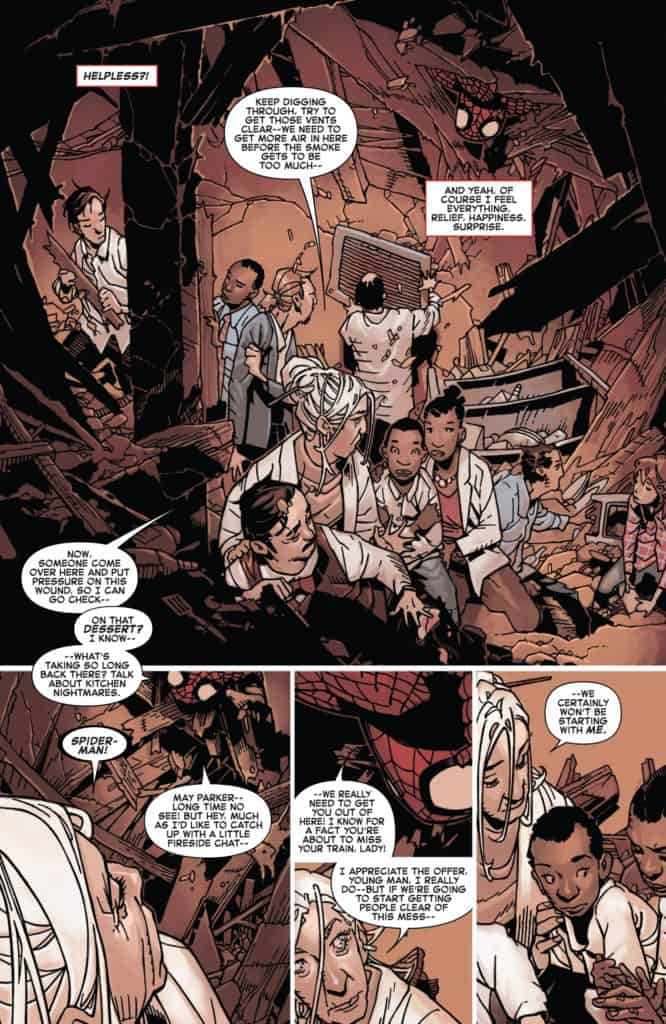 So, from a characterization perspective, this issue is just about as top-notch as it comes. The plot is a little sparse, but the dynamic between Peter and May is more the star here so that can easily be forgiven. But I can’t quite so quickly forgive the reveal of the homeless man’s identity; it comes completely out of nowhere, adds nothing to the story, and its relevance would almost certainly be completely lost on younger readers. His death scene is supposed to have weight, but it rings false, like Spencer was desperate to needlessly wring even more emotion out of a scene that was already fully charged. It was just unnecessary – drama for the sake of drama. 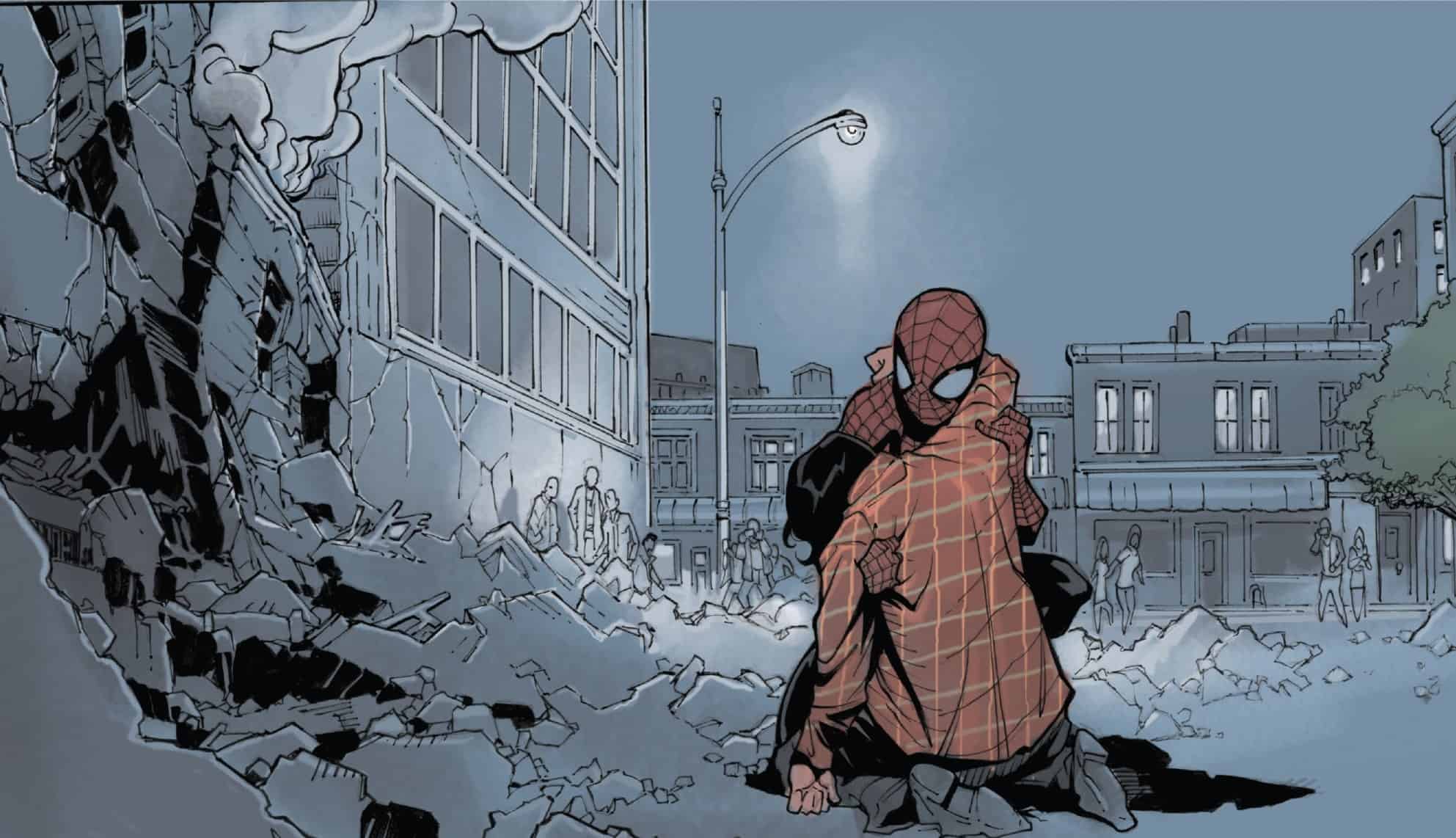 My other qualm is Chris Bachalo’s art, which though unmistakably his suffers from being embellished by a veritable army of inkers. Some pages show off some of his signature quirkiness very well, but others feel like they were inked too heavily and some of the detail was lost. I seem to recall there was some last-minute changes to the art team for this storyarc, which would explain the need for five inkers, so I can’t complain too much. And credit where credit is due: Bachalo and Jim Campbell do an outstanding job with the colors, especially considering there isn’t an insane amount of variation from scene to scene. They add just the right amount of hue and variation to capture the intended tone of each page, effectively utilizing cooler blues (see above) for the quieter moments.

It might be easy to mistake this issue as not having a lot happen in it; indeed the action beats are almost nonexistent and the actual plot is fairly by-the-numbers. But that's beside the point: Nick Spencer has created a quiet little masterpiece of characterization, focusing on Peter and May Parker and really leaning into what makes them one of comics' most enduring mother and son.