Amazing Spider-Man #17: WELCOME TO THE JUNGLE! 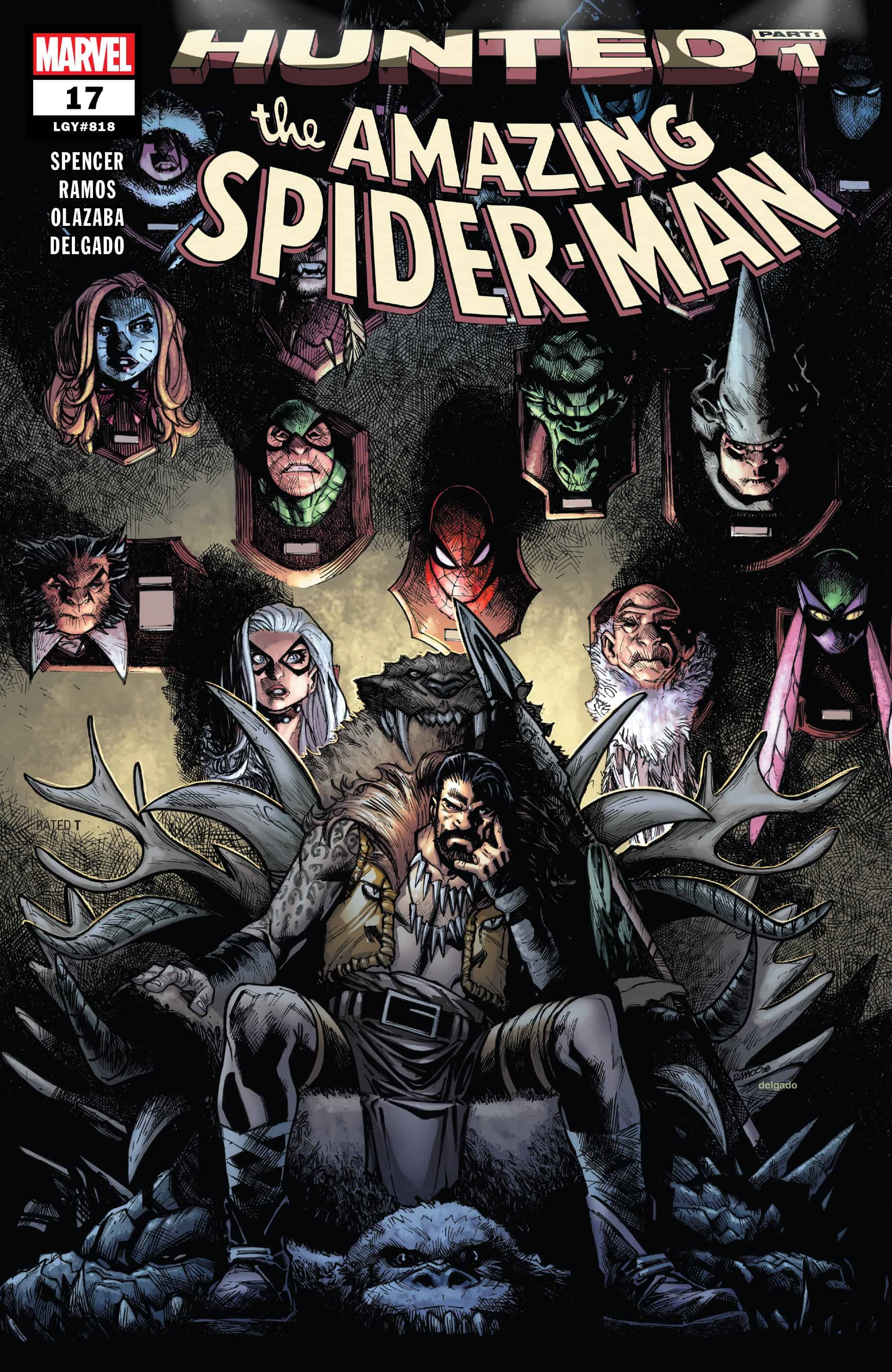 "Hunted" begins in earnest! Kraven, newly-returned from the dead, is feeling melancholy about his place in a world he no longer recognizes. 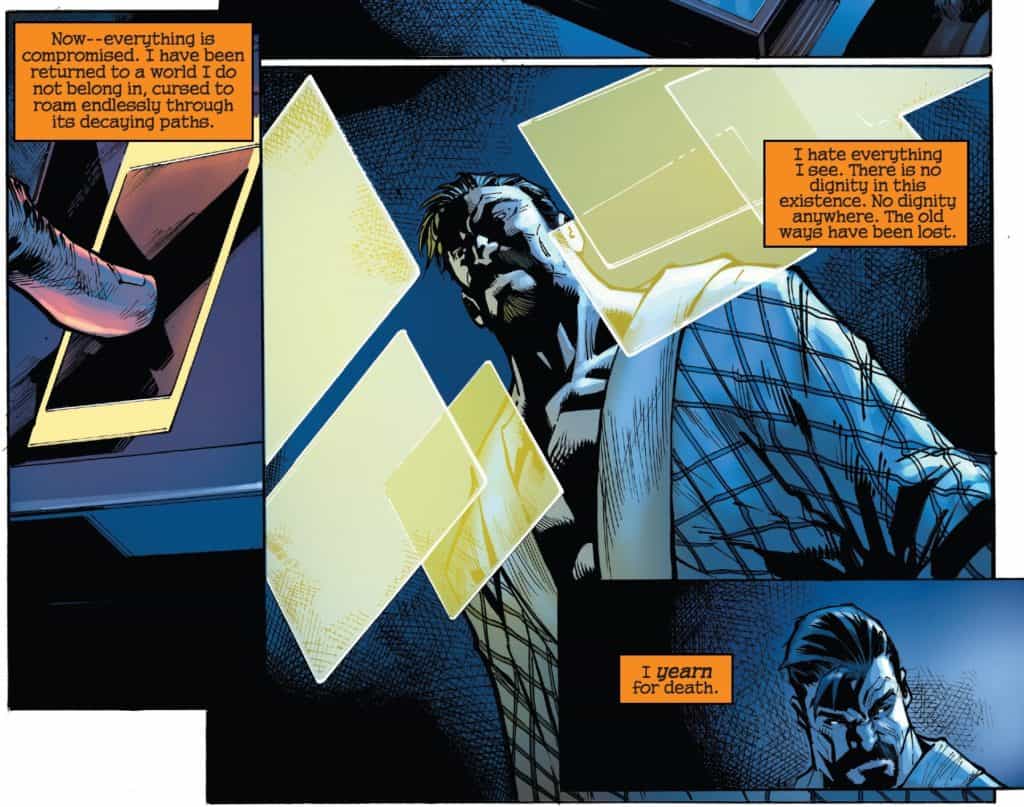 Good thing he has his amped-up clone/son in tow, and a whole slew of animal-themed villains trapped in pods for his small army of hunters to, erm, hunt! Little does he know, though, that last-minute menagerie addition Black Cat secretly summoned Spider-Man to her aid just before she was captured! 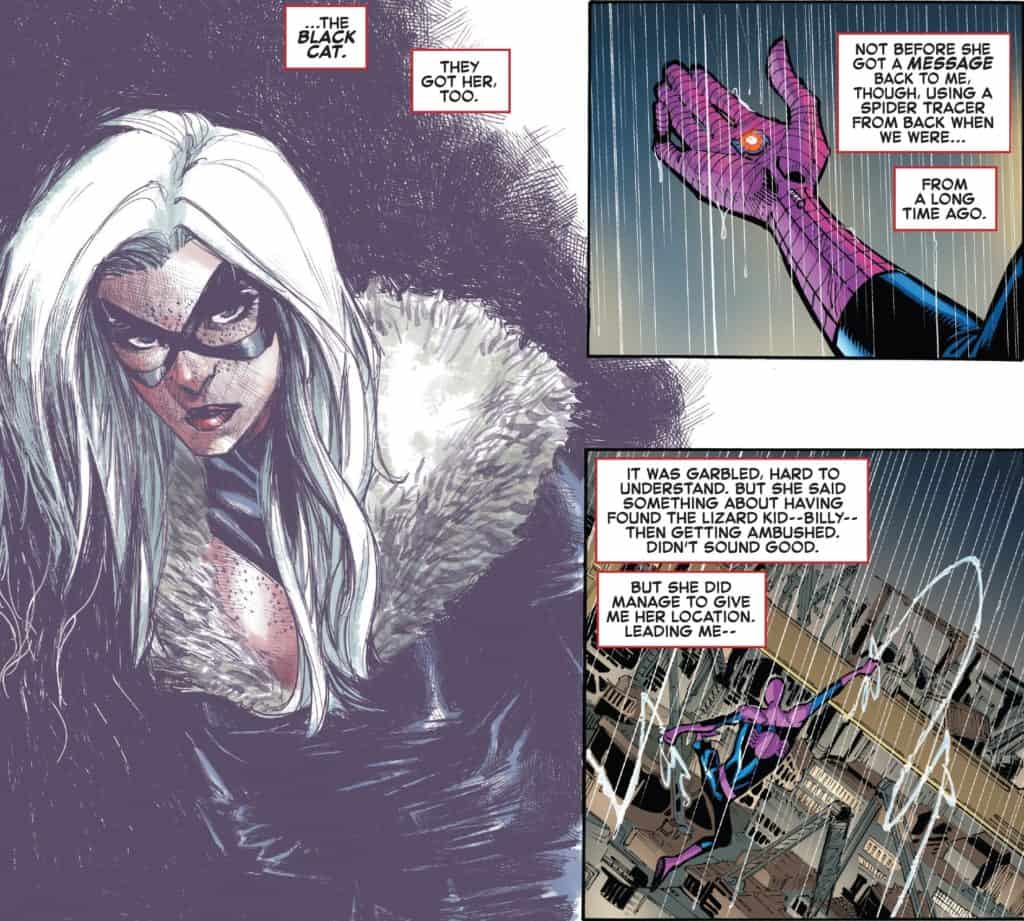 But before Spidey can come to her aid, he's brought low by Kraven Jr. 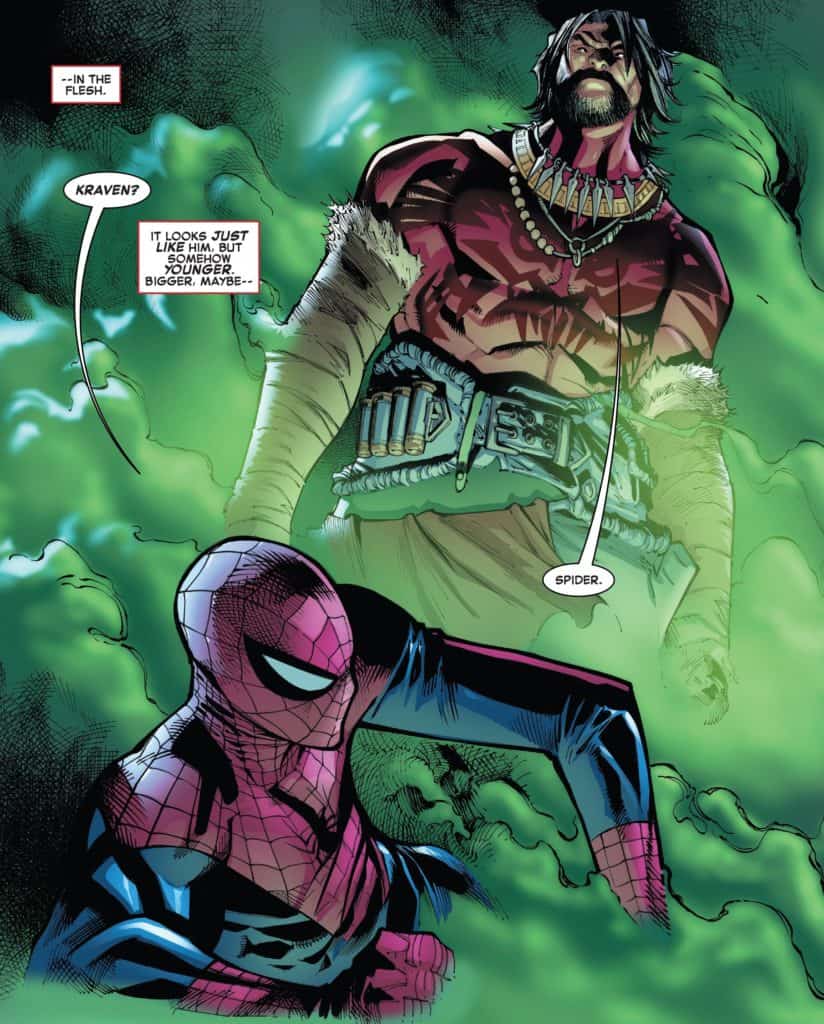 Spidey wakes up surrounded by a small army of villains... and that's when the fun really begins! 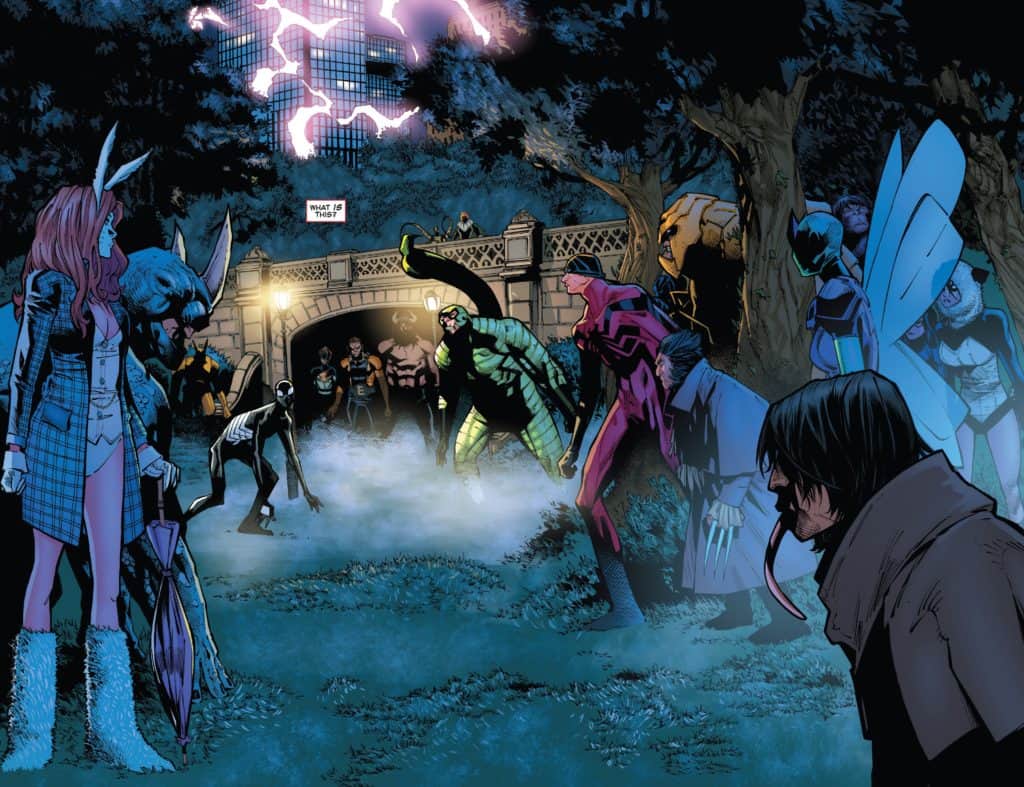 I’ll admit, I was skeptical going into “Hunted.” Without rehashing a previous review, I’ll boil it down to this: the large-scale theatrics of “Hunted” just didn’t seem to lend themselves to Kraven, who is a decidedly low-key character. And although it’s too soon to say definitively if I was ultimately mistaken in my initial assessment, I can state that at least in this first full chapter, writer Nick Spencer goes to great length to plant the story’s two feet firmly on terra firma despite the big-screen trappings. 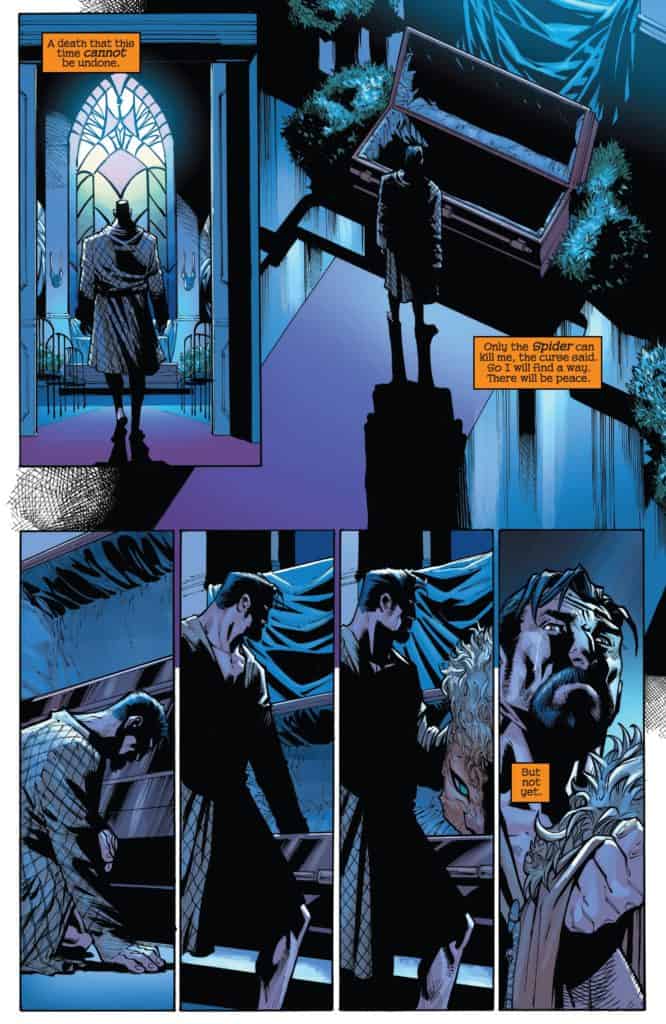 Spencer smartly calls back to the immortal “Kraven’s Last Hunt,” but only out of deference, not because he’s trying to write his own version of that story. Thirty-two years on, it’s impossible to separate Kraven from that tale, and Spencer knows it. So rather than run from it, he embraces it, making its events a permanent part of Kraven’s character – a haunted past, a  failure he can never outrun. Recently returned to life, he’s not only draped in failure, but out of sync with the rest of the world – isolated and alone. His attempt here to make a grand statement is coupled with his just-revealed intention to die in the process, eschewing the large-scale theatrics of the story itself and making it, at its core, a story of a man desperate to make sense of his life. That sort of humanity has me rooting that Spencer can pull “Hunted” off.

Humberto Ramos’ pencils are far more restrained than in other artistic offerings from his resume. Although it’s still wild and cartoony – almost impressionistic in places – some of his more eccentric tendencies are reigned in by the dark and moody coloring of Edgar Delgado, who along with inker Victor Olazaba ooze atmosphere and even menace. 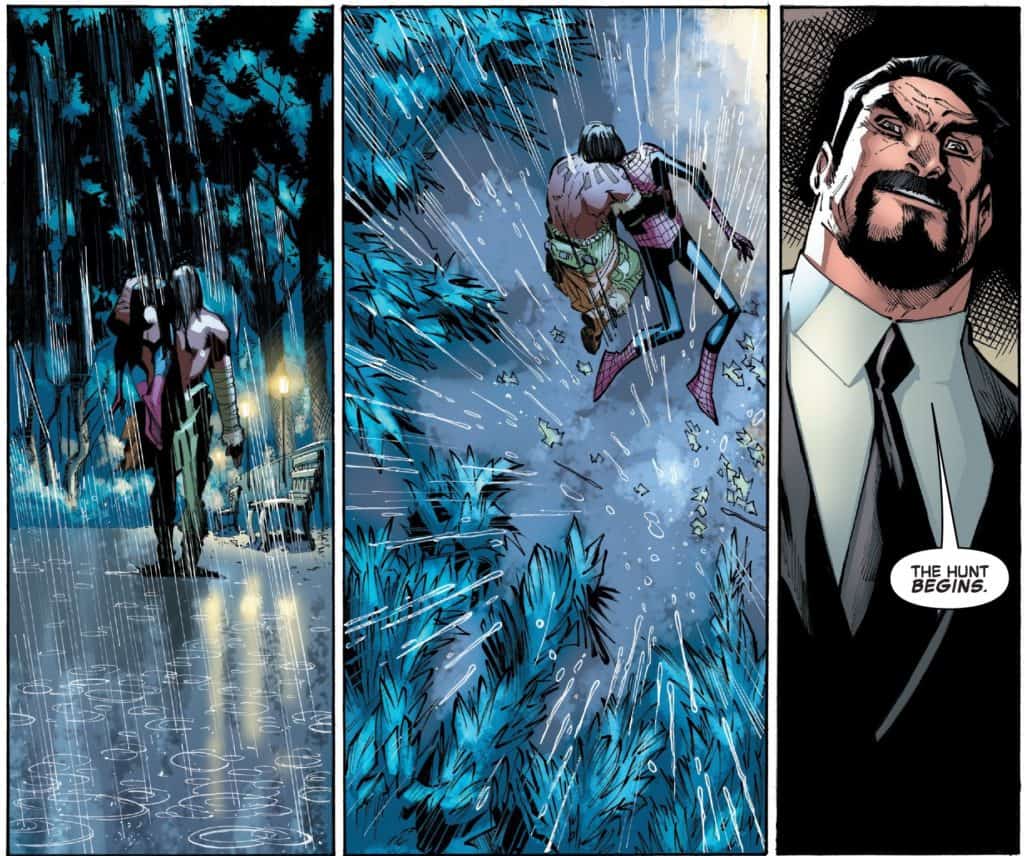 However, Ramos does still have some awkward panels that look rushed (see the above Spidey panel, where he looks like a scarecrow), and other figures that look weirdly off-model, such as Scorpion: 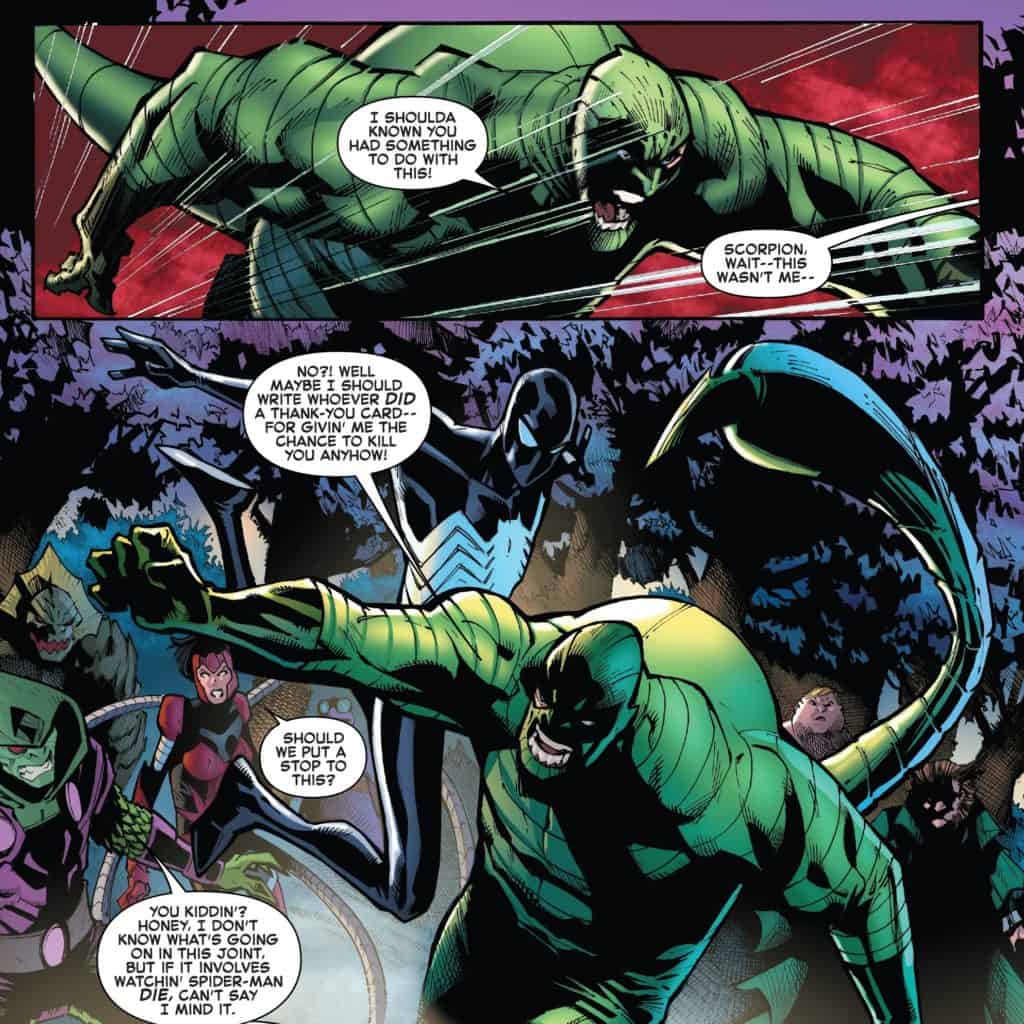 But these are minor quibbles, and can be chalked up to artistic license. Ramos’ art is, as ever, full of zippy energy and a quirkiness that few other artists can pull off. And lastly, his style is all his own – there’s a relatively short list of artists who can legitimately say their style instantly brings its artist’s name to mind, but Ramos makes the cut. 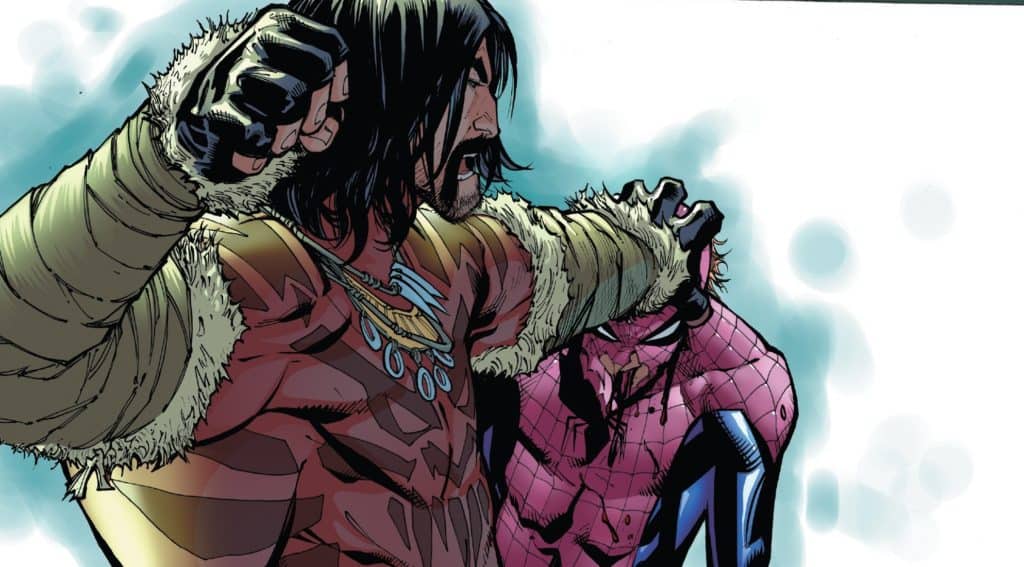 Will “Hunted” succeed as a spiritual ancestor of “Kraven’s Last Hunt?” It’s impossible to say at this point, but I’ll concede: Nick Spencer is off to a worthy start.

"Hunted" gets off to a high-stakes, slam-bang start that manages to keep itself rooted in the characterization of its protagonist, Kraven. And despite his inherent limitations as a normal (i.e. non-superpowered) man going up against a superhero, Kraven proves why he has endured as a first-class Spider-Man villain for over 50 years.

Amazing Spider-Man #17: WELCOME TO THE JUNGLE!