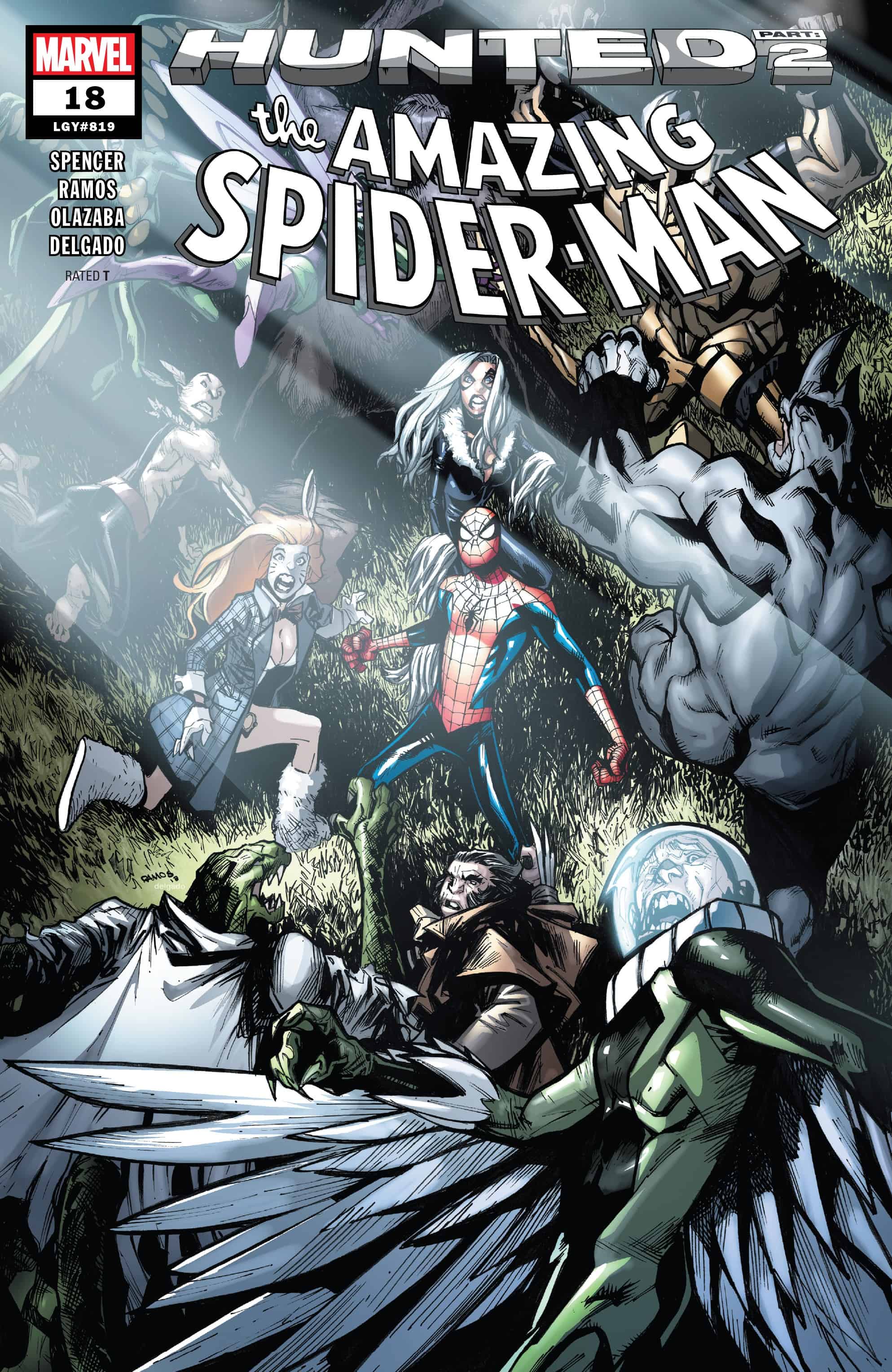 The hunt begins! Spider-Man and a veritable menagerie of animal themed villains are trapped within force-fielded Central Park and beset by Kraven's small army of weekend warrior hunters! That may not sound like much of a threat, but these are no ordinary hunters... 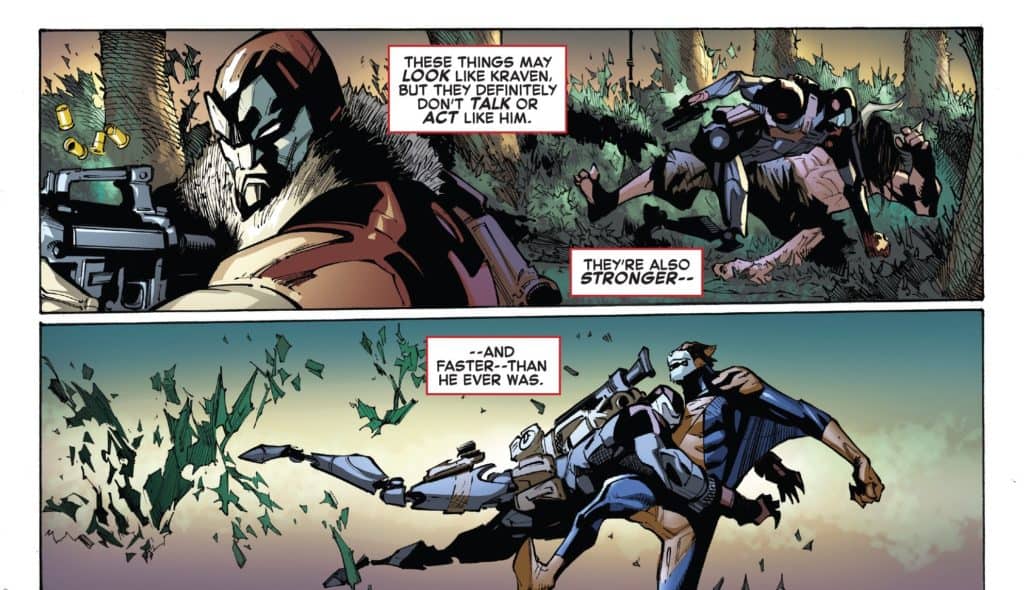 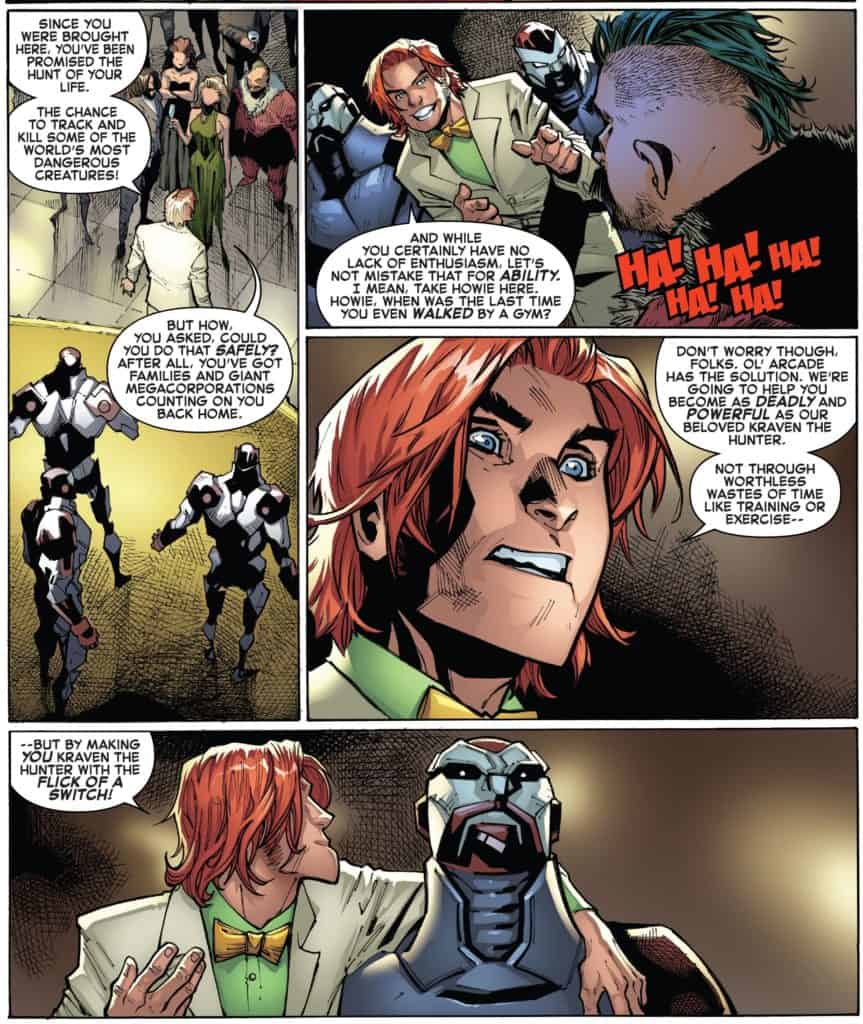 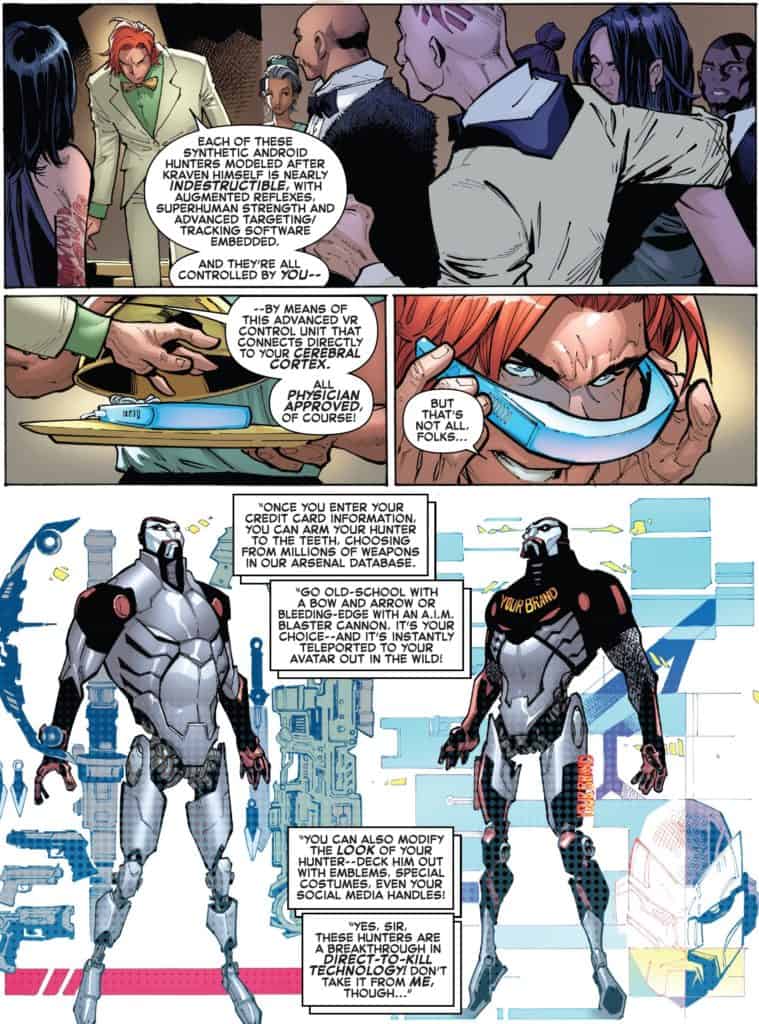 Spidey, meanwhile, works feverishly to save as many lives as he can after witnessing several of his lesser foes fall. 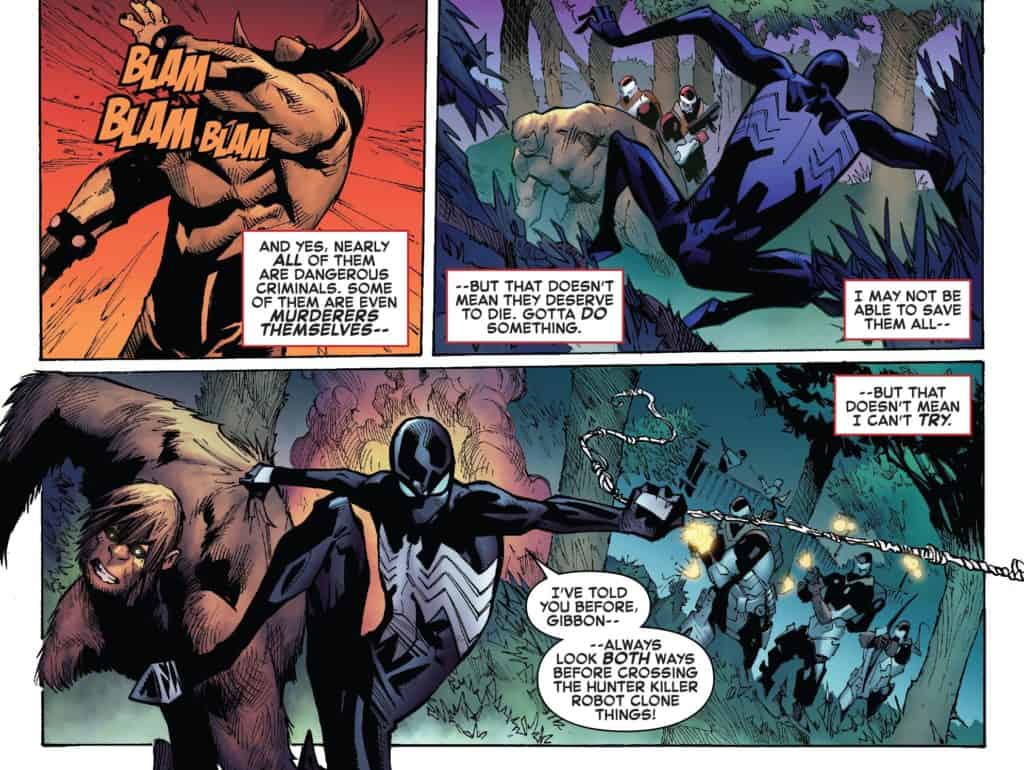 Surrounded by chaos, some villains' base survival instincts kick in, creating an explosive situation where no one can trust anybody else. 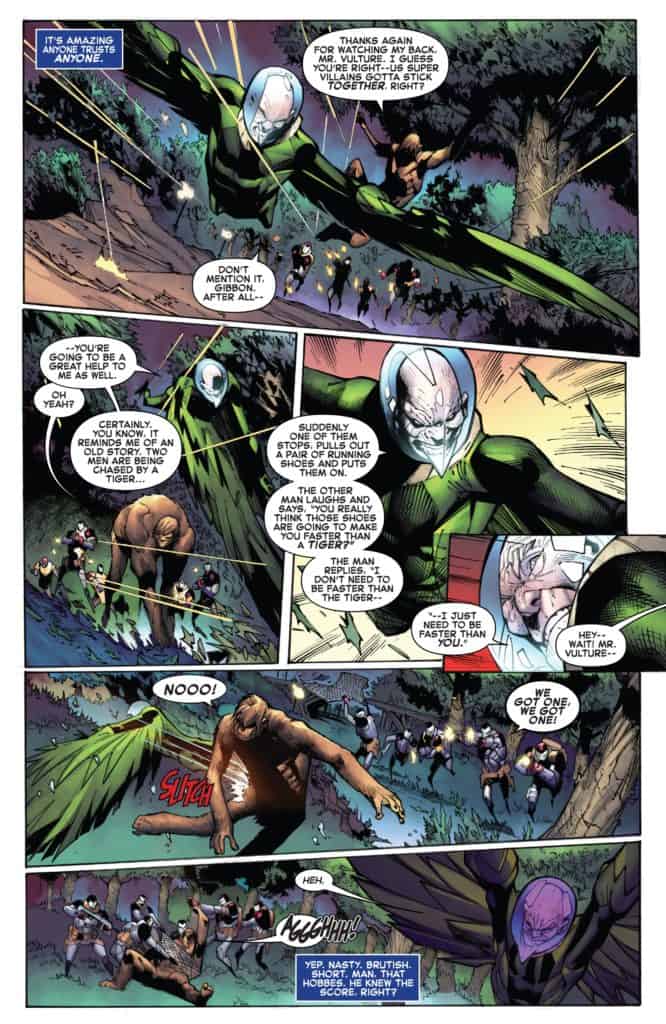 Amidst the turmoil, Spidey can't shake the feeling that something awful is going to happen to Mary Jane. Last issue he had a vision of something terrible occurring - he doesn't know what, but it will happen soon, and trapped in Kraven's ultimate hunt, there's nothing he can do to stop it!

“Hunted” barrels right along in its second installment, going full-on action mode (with a helpful exposition dump from Arcade so readers know the full scoop on how Kraven’s going to make a gaggle of one-percenter, overweight safari-loving hunters an actual threat). Ordinarily I’d be opposed to such a move, but the way writer Nick Spencer takes us out of the immediate – yet unexplained – danger to fill in some storytelling gaps, I’m all right with it this time, especially since so much of the issue is action-oriented. And once that action shifts back to Central Park, everything makes much more sense. 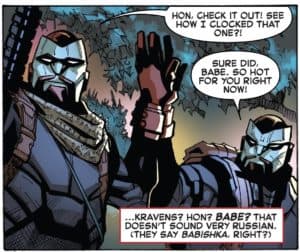 And once the action truly kicks in, all hell really does feel like it’s breaking loose. It makes sense Spencer would use some minor villains as sacrificial lambs in order to up the stakes; after all, no one’s going to decapitate the Vulture in the opening seconds of this story or anything. It could have come off as a cheap maneuver to drive up the body count, but Spencer writes the characters’ downfalls with a blunt force that really is jarring. (Sidebar: I was completely unaware of the Iguana being around again – I didn’t think he’d been seen in comics since the late ’70s or early ’80s.) When the shooting starts, the villains freak out and scatter, creating a situation where no one is safe, even well-meaning Spider-Men.

So, from a pure action standpoint, this issue delivers. We feel everyone’s panic as the shooting starts; it’s refreshing to see villains written in such a candid and human mode. Even when they act abhorrently, like when Vulture betrays Gibbon, it’s at least understandable. Vulture may not be the nicest guy, but at least readers can get where he’s coming from.

What I don’t care for on the story side of things is the subplot involving Spider-Man having a vision of MJ being in some future danger. Last issue attributed it (maybe) to some sort of hallucination caused by gas Kraven Jr. used on him, but that’s presented as questionable at best, even from Spidey’s perspective. Which is giving the notion far more latitude than it deserves – not even in the realm of comics does it make sense for a knockout gas to cause precognition. 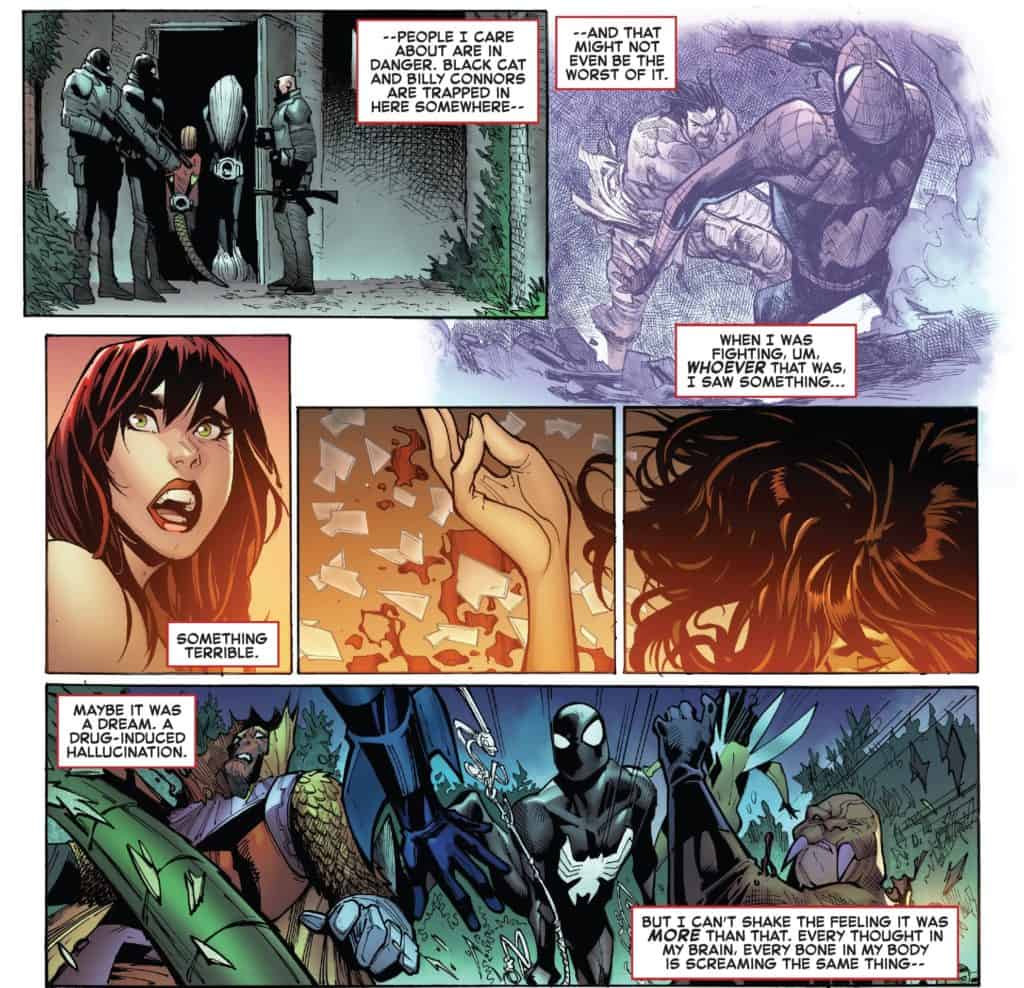 So ruling out precognition-inducing sleepytime gas, what does that leave us with, other than the notion that Spencer wanted an excuse to contrive even more tension than there already was by placing MJ in danger? And that he couldn’t come up with a logical reason for Spider-Man to have an extremely specific flash-forward that made any sense, so he just went with “it happened because reasons?” I hate to think that, because generally speaking I like Nick Spencer as a writer, but looking at how that subplot has progressed thus far, I’m left scratching my head and coming up short for a reason otherwise. Maybe all will be revealed later. I hope so.

The second concern I have with this issue is the art. Man, Humberto Ramos (an artist not typically known for his restraint anyway) is just all over the place. Characters’ limbs and proportions are weirdly distorted, their faces change from panel to panel, and frankly he makes me feel like he was rushing as quickly as he could to get this issue in the can. 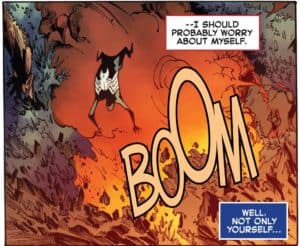 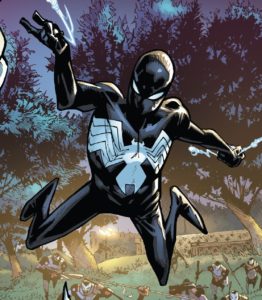 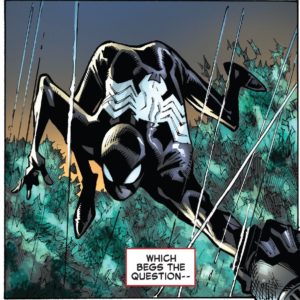 None of this would be quite as glaring if there weren’t ample other pages throughout the comic where Spider-Man – and his proportions – are completely normal and perhaps more to the point, consistent. The same problem occurs through out the issue with Mary Jane’s face: some panels are clearly, even beautifully her. 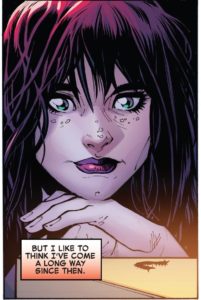 …And then on other pages, this happens: 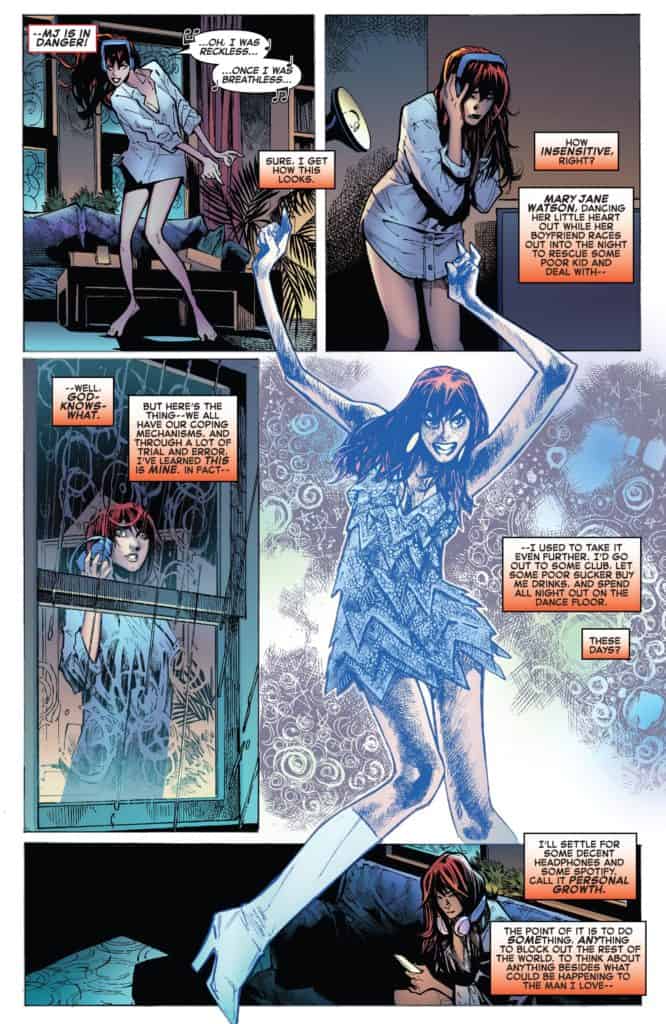 And we still don’t know why Spidey’s in his black suit all of a sudden! No explanation was given when he woke up in it last issue. Honestly it seems to me like Spencer just liked the idea of having Spidey in his black costume again, and his editor said fine and that was that. No big deal. I’m fine with that – the problem is that within the context of the story, it’s just a completely random occurrence with no rhyme or reason.

All in all, not a terrible issue. I may seem like I've been nitpicking this issue to death when in truth I did enjoy it for the most part. But minor things matter, and they do add up if allowed to persist. And if enough of them keep happening, cumulatively they could be enough to eventually sink this story.