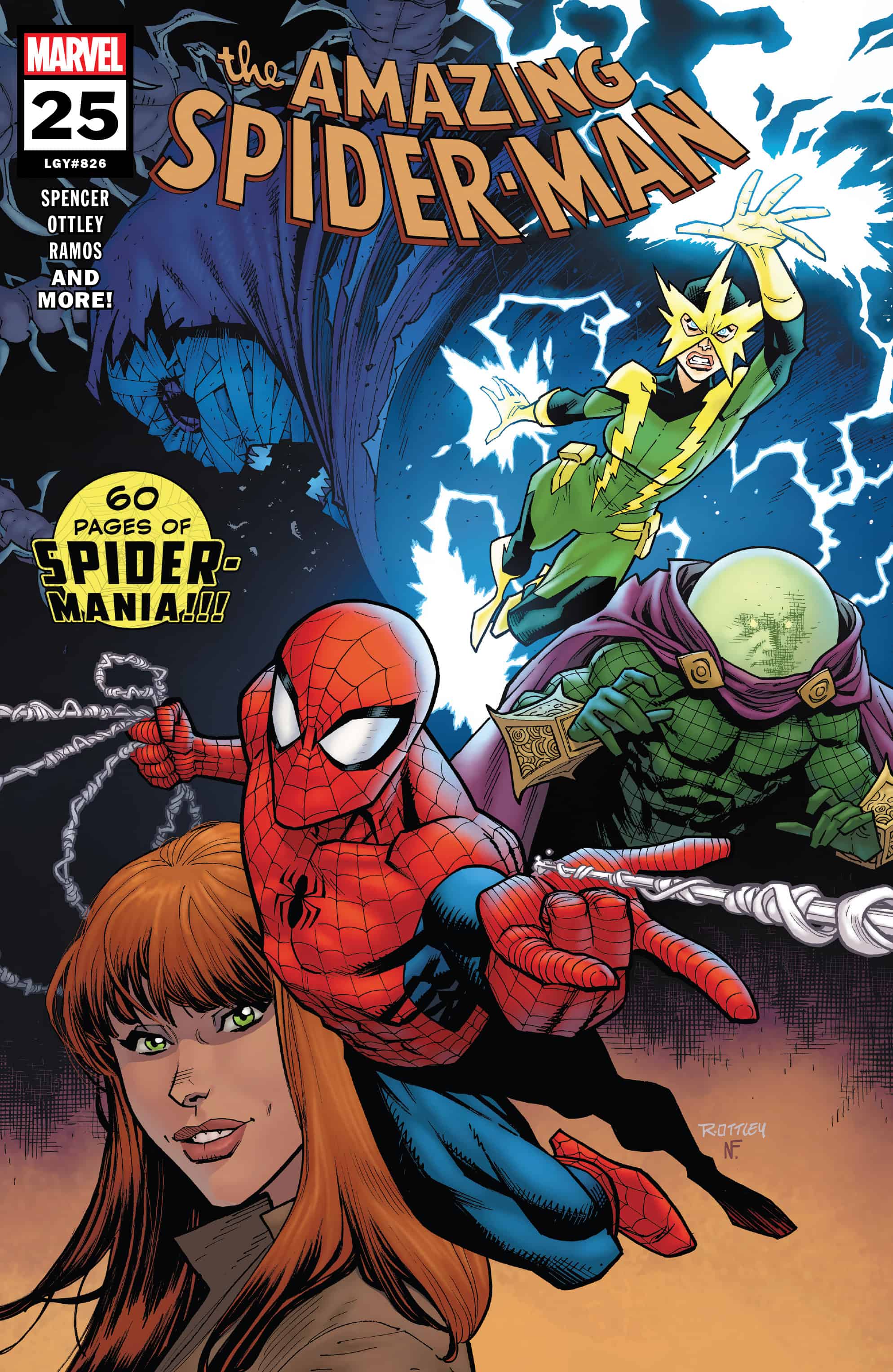 Following up on last issue's cliffhanger, we learn that Mysterio switched places with his psychiatrist, who was the one who was actually killed. He is, however, in league with current Spidey-verse mystery man Kindred. 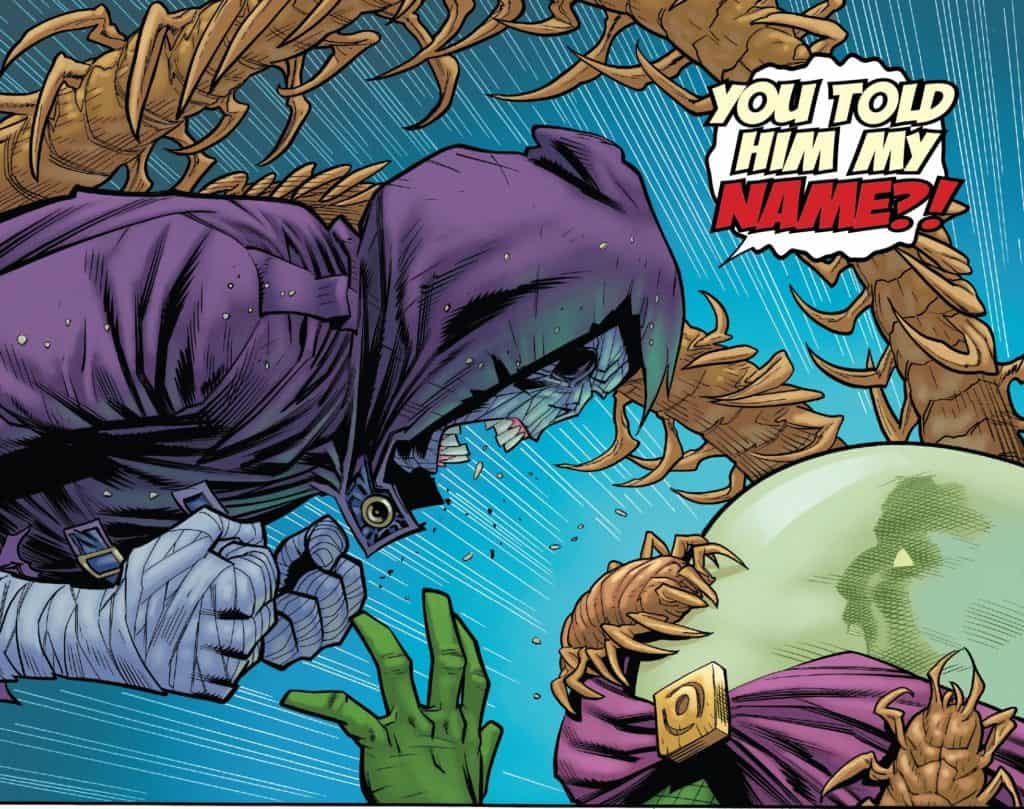 Elsewhere, Spider-Man is tearing through a small robot army to retrieve the missing Curt Connors, who has been missing since he defeated Kraven Jr. at the end of "Hunted." 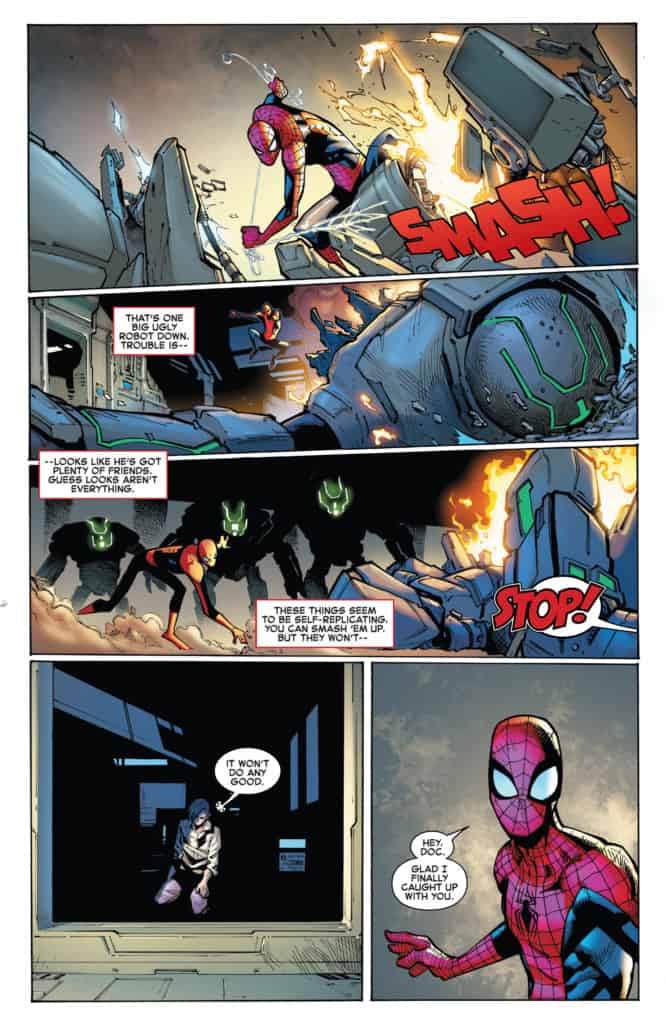 This action keeps Spidey from meeting Mary Jane at the theater for an evening out. Mary Jane, though, runs into an old acting rival at the play, which makes things extremely awkward... 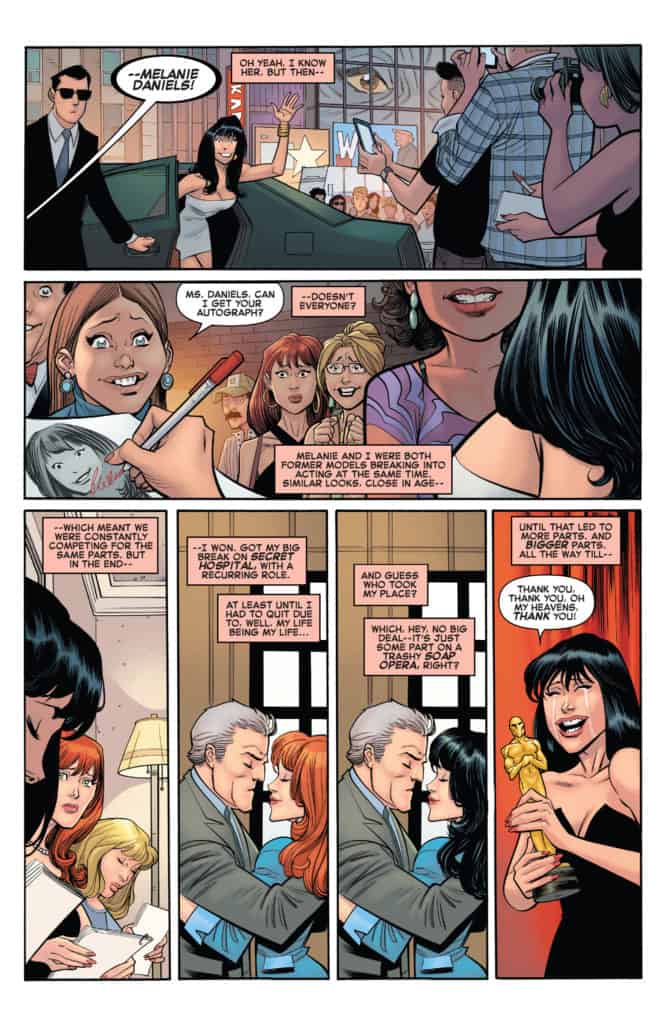 ....And is then compounded by the new Electro taking Melanie Daniels hostage before the crowd! The villain is intent on live-streaming the first-ever supervillain/celebrity hostage situation, with a crowdfund set up to pay her ransom! 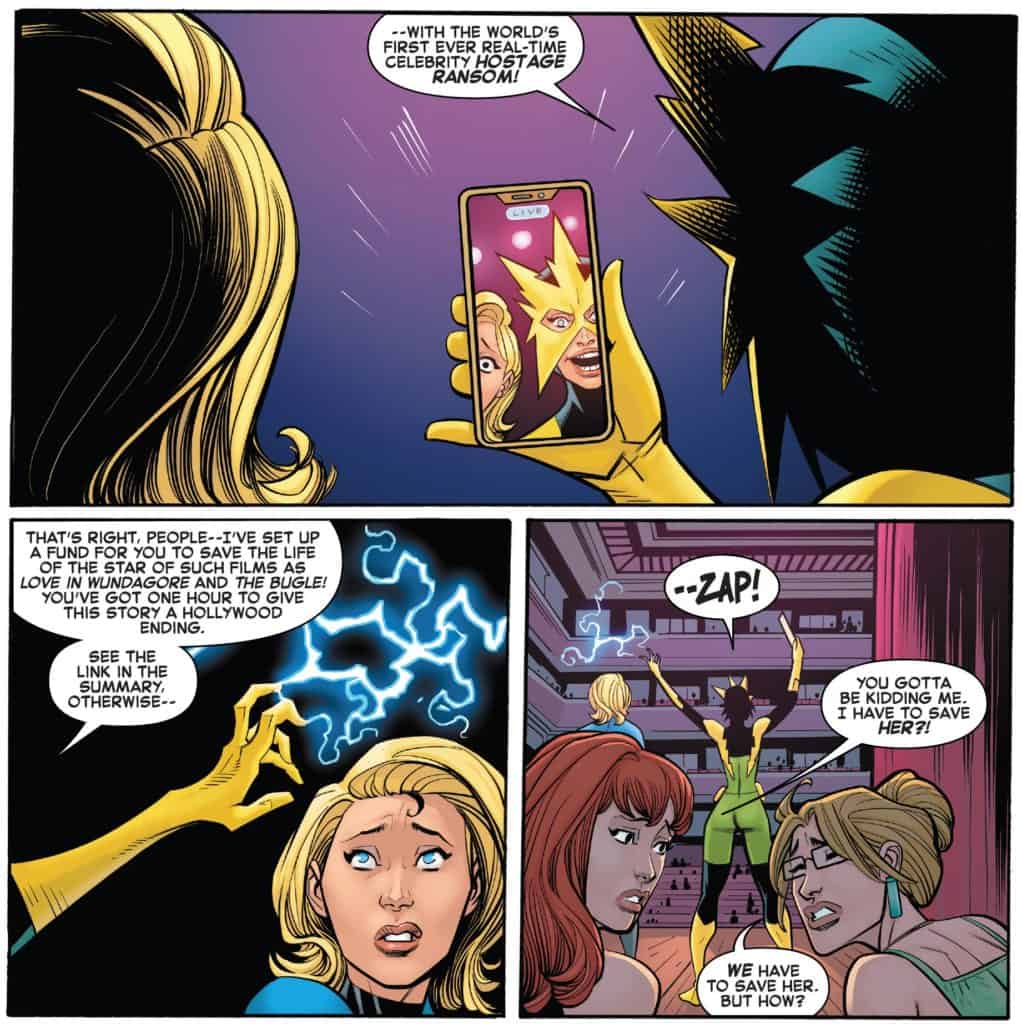 Mary Jane is faced with a serious conundrum: with Spider-Man otherwise occupied and no other superheroes in sight, what's a non-powered former actress to do?! Never fear, readers - she has a plan!

Writer Nick Spencer and an army of artists (along with some relatively competent back-up storytellers as well, more on them in a minute) turn out a mostly entertaining issue for their first-annual anniversary of the former’s run on the title. Spencer’s run has been up and down, but fortunately, this celebration of all things Spidey is more up than down. That’s not to say it isn’t without its flaws, though.

Once readers get over the underwhelming “twist” that Mysterio didn’t die last issue, they’re treated to some generally competent storytelling. No, there aren’t any answers given in the ongoing mystery of who Kindred is, which is frustrating – especially given his build-up in recent months, creating the presumption that big-game issue twenty-five would be the payoff. It isn’t, but the scenes with Mysterio and him aren’t exactly wasted, either. There’s a ton of intriguing set-up at play for future stories to come.

Interestingly, it’s Spider-Man who winds up getting the short end of the storytelling stick this issue. His sequences fighting Curt Conners’ robots (who knew he knew so much about robotics as well as biology?) are pretty much as low-stakes as it gets, and the payoff – Spidey locating Connors and in about four words convincing him to get over his guilt and go home to his family – is wrapped up way to conveniently for readers to feel any investment. This sequence is also hampered by Humberto Ramos’ over-the-top art, which at this stage of his career would be far better suited to an indie book of his creation than a big name character like Spider-Man (I mean that as a compliment).

No, this issue’s big star turns out to be Mary Jane, who – despite having her story hampered by lackluster art from Ryan Ottley – shines, using only her wits and her natural abilities as an actress to overcome tremendous odds and outsmart the new female Electro. It’s a helluva fun sequence with a solid twist, and it gives Marvel’s First Lady (well, outside of Sue Richards) a real chance to shine. Kudos to Spencer for throwing his weight into making her sequence not only feel like it has consequence, but has real emotional payoff too.

As for the rest: it wouldn’t be a Marvel anniversary issue without some back-up story padding, would it? The first, also by Spencer but with art by Patrick Gleason (making his Marvel debut), takes Peter Parker back to college (three years ago he was the new Tony Stark, now he’s back in college… comics, folks!), for a lecture/finger-wagging/slight tirade about the evils of technology. It’s unclear, but it looks like Spencer is probably setting Peter’s new professor up to be some kind of Luddite-esque anti-technology crusader – which may or may not net an interesting tale; on the plus side, Spider-Man 2099 is back from cancellation oblivion (again)!

The second back-up is a lightweight affair by Zeb Wells (a more fitting description of Wells’ writing I’ll never know) and never-say-die-to-the-’90s stalwart Todd Nauck, featuring an all-star team-up between Spidey and J. Jonah Jameson against a weird robot that changes their clothes colors. Then Dr. Strange gets involved for… some reason, and then the story ends without any real conclusion. It’s a breezy affair – intentionally, to be sure, but forgettable nonetheless.

The final story dares to ask the question, what would happen if: 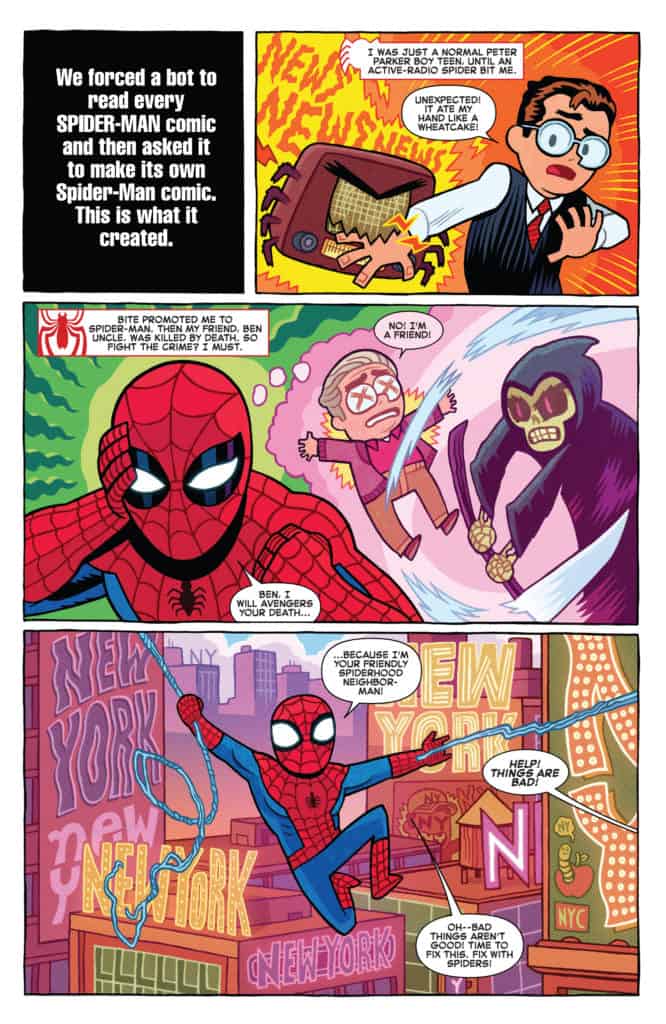 Indie creators Keaton Patti and Daniel Hipp create a fun little zinger that isn’t without its charms, but the joke wears thin pretty quick. Maybe I’m just a little to old for the target audience on this one…

Getting back to the main stories, though, the central problem here is that nothing stands on its own. It’s mostly just more set-up for future stories (Kindred/Mysterio, MJ getting her acting groove back, Peter going back to college, Electro’s denouement) or an epilogue from a story that’s been over for three issues now (Curt Connors). Which is the real frustration here: instead of giving us a beginning, middle, and end for anything between these covers, it’s mostly just more first acts. There’s no resolution to anything, which really means that little if nothing in this issue stands on its own – other than Mary Jane’s story, which again, winds up being the emotional anchor as well as the only complete narrative. That’s not to say there’s no merit to the other components of the issue – but they do wind up falling short of expectations by their very nature.

Amazing Spider-Man #25 tries to juggle a lot of storytelling balls, but other than the Mary Jane story, fails to provide anything resembling a complete tale. In other words, this issue tries to justify its higher price tag with more pages - but alas, more pages do not a complete story make. It's just ever more set-up for future story arcs, a trope Nick Spencer has deployed far too many times in his still-young Spidey tenure - and with each usage, further diminishing returns.