Amazing Spider-Man #27: In Which Spider-Man and Boomerang Finally Team Up 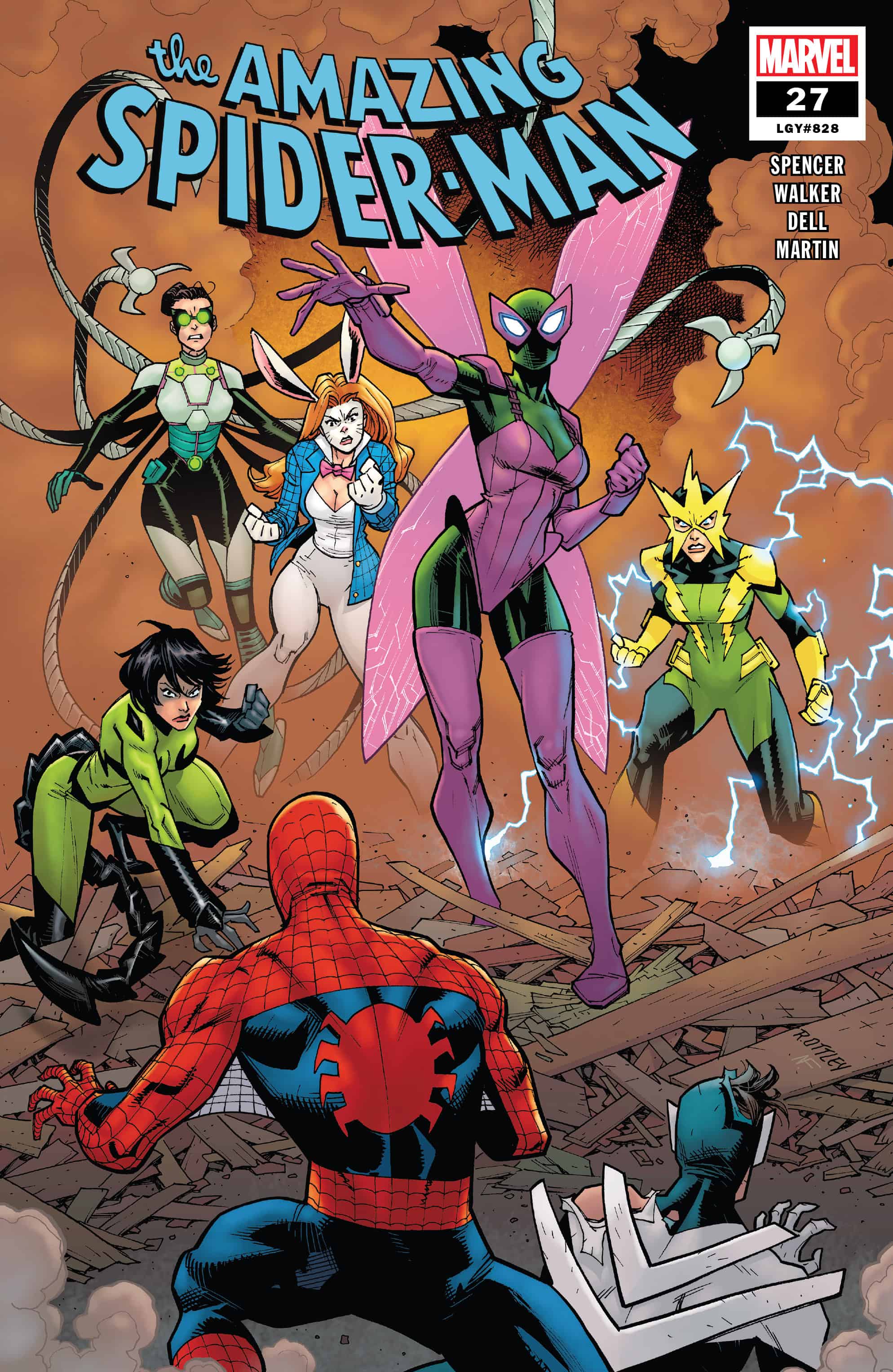 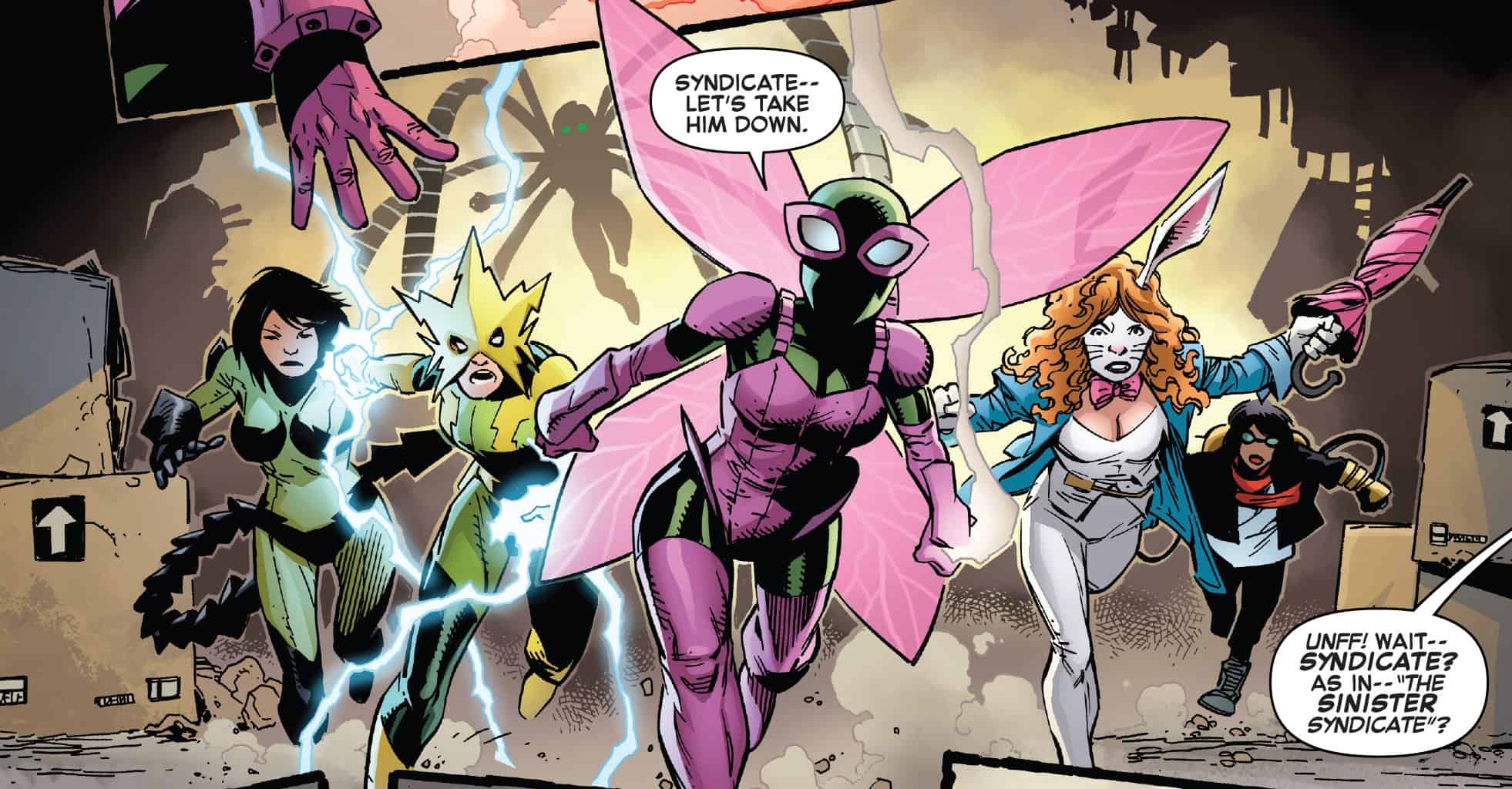 It doesn't take long, though, for everyone's favorite Wall-Crawler to join the fray! 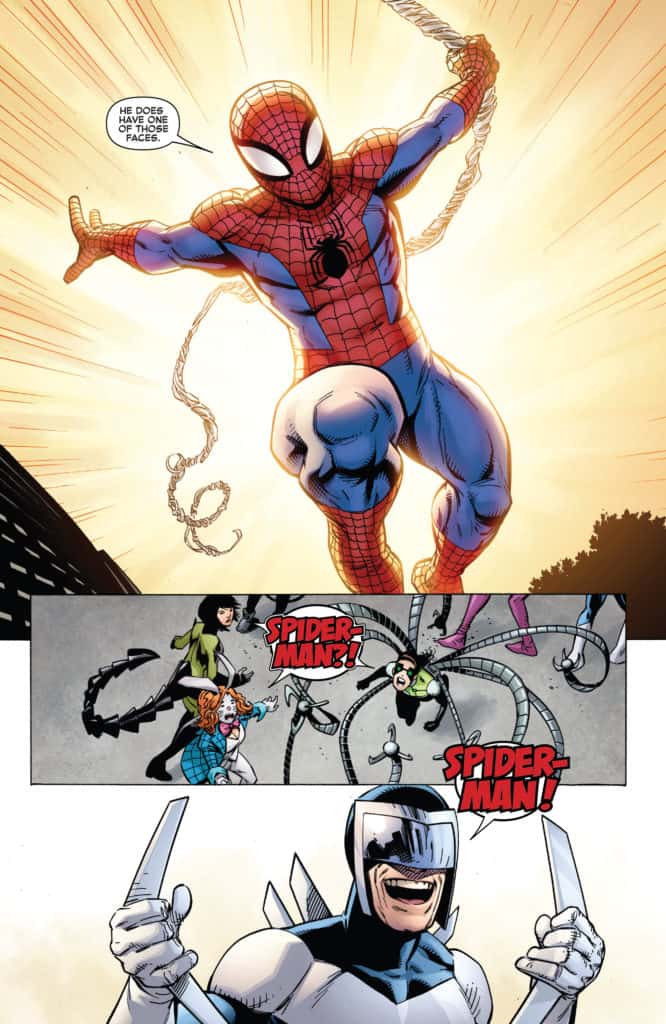 It's time for a good old-fashioned Marvel team-up... but can Spidey and Boomerang work together long enough to overcome their adversaries? 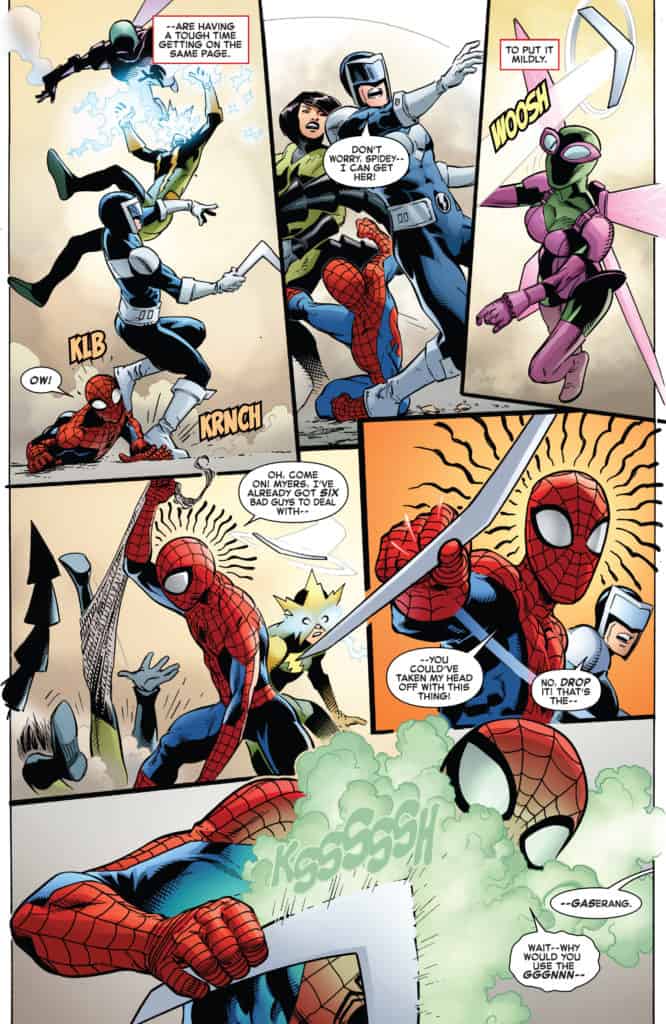 Long answer: despite her claims of eternal sisterhood with her teammates, the Beetle has more planned than she's letting on... 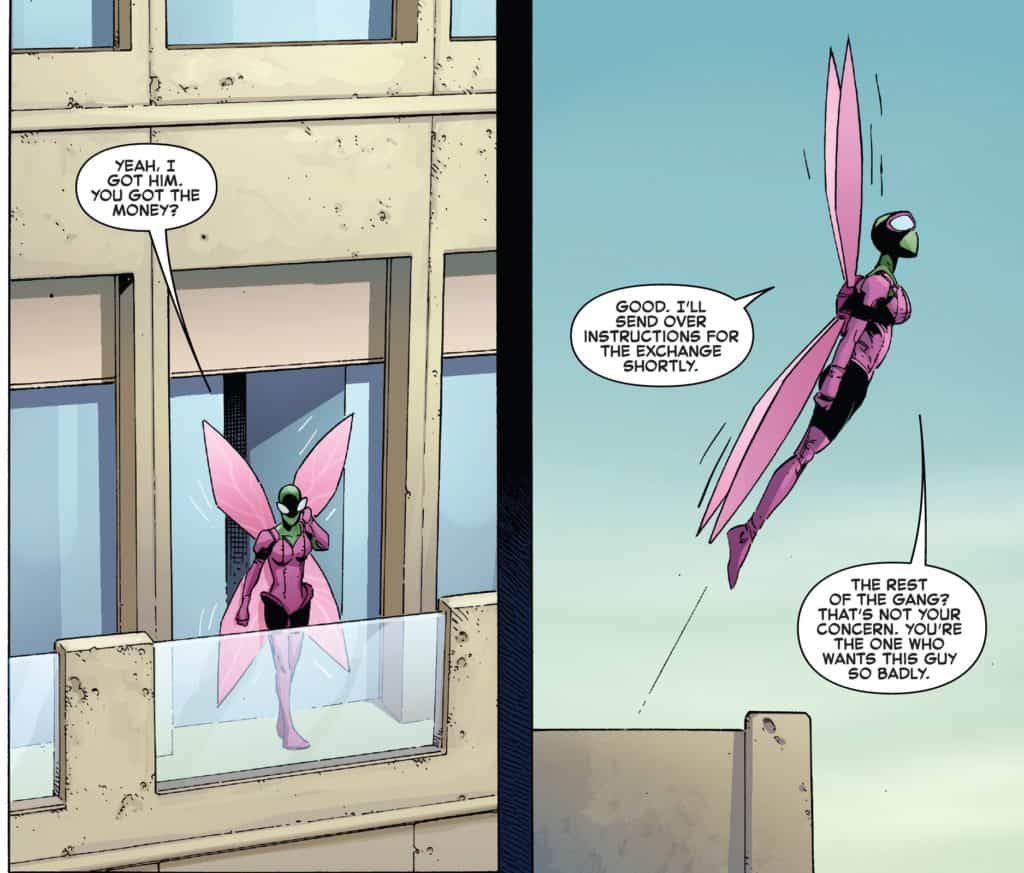 First things first: Amazing Spider-Man #27 is flat-out fun. It’s exactly what writer Nick Spencer’s Spidey tenure has thus far lacked: stories that are of a more lighthearted nature and therefore more in his wheelhouse. Spencer doesn’t do drama particularly well, so a story that falls into the “zany romp” category of storytelling fits him to a tee.

Having Boomerang weirdly become Peter Parker’s roommate was always something of a stretch. Fred Myers has proven to be a self-centered, double-dealing piece of $&%+ and putting that guy at the center of Peter Parker’s world – even for laughs – felt like too much of a forced odd coupling. Okay, it still does, but having Fred at least trying to straighten himself out gives Peter something he’s never had before: a friend from the wrong side of the tracks whose last name isn’t Osborn. It creates a completely new dynamic for Spencer to play with, one that pushes Peter’s “willing-to-forgive-anybody” ethics to absurd limits. As evidenced last issue, Peter has developed an actual soft spot for ol’ Fred and is learning to like him despite his shady past. Why? Because Fred is a laid-back, no-complications fun guy to have around (when he’s not being a self-centered, double-dealing $&%+, that is).

The other half of the fun here is the Beetle’s new girl-power Syndicate (don’t call it the alliterative Sinister Syndicate, buddy). Five out of six of them have personal beef with Boomerang, and the other one just likes violence. Of course, some of them have lesser reasons for despising him than the rest… 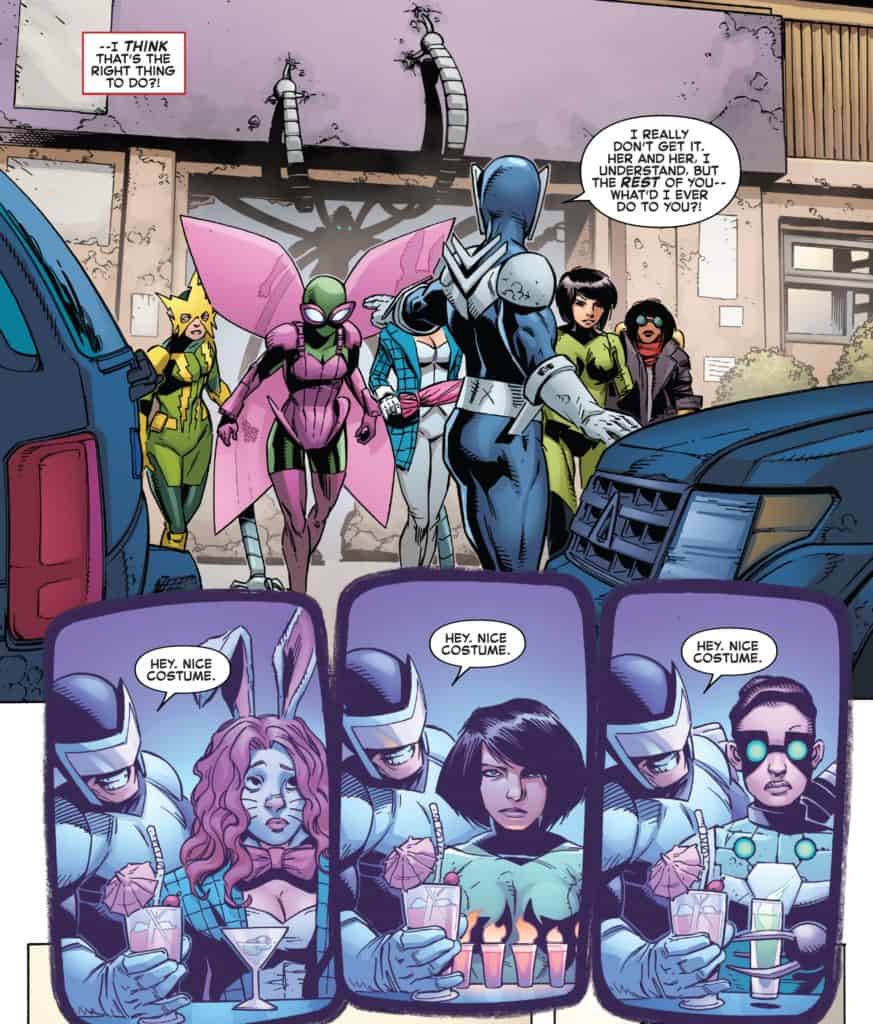 But true to form, the Beetle is actually every bit as duplicitous as Boomerang, and has an alternate agenda to the one she’s selling her squad. This is also right in line with Spencer’s glorious Superior Foes of Spider-Man, in which she, Boomerang, and literally every other character was constantly stabbing the others in the back. That said, though, the idea of forming an all-woman supervillain team is admirable – but doesn’t having Beetle betray them undermine the entire argument for them existing? Better-read feminists than I will have to hash that one out, but I suspect the answer is “yes.”

Kev Walker is an interesting choice for this book. His cartoony, lighthearted style is a good match to Spencer’s story, but the question is, when it comes time again for a tale with a more serious tone, what then? Neither he nor other rotating regular series artist Ryan Ottley have a style that lends itself to headier themes. Time will tell. Walker’s linework isn’t necessarily to my particular tastes, but that doesn’t mean it doesn’t fit this exact story well.

"Fun" is the word in "Who Run the World?." Nick Spencer is in his comfort zone, and it's nice to have a Spider-Man story in this book that isn't leaden with melodrama and the knee-jerk need to leave two-dozen dangling plot threads. Focus is the order of the day and if Spencer's run keeps this pace, he has a shot at redeeming it after several recent missteps.

Amazing Spider-Man #27: In Which Spider-Man and Boomerang Finally Team Up