Amazing Spider-Man #28: The Real Housewives of Evil (or Something) 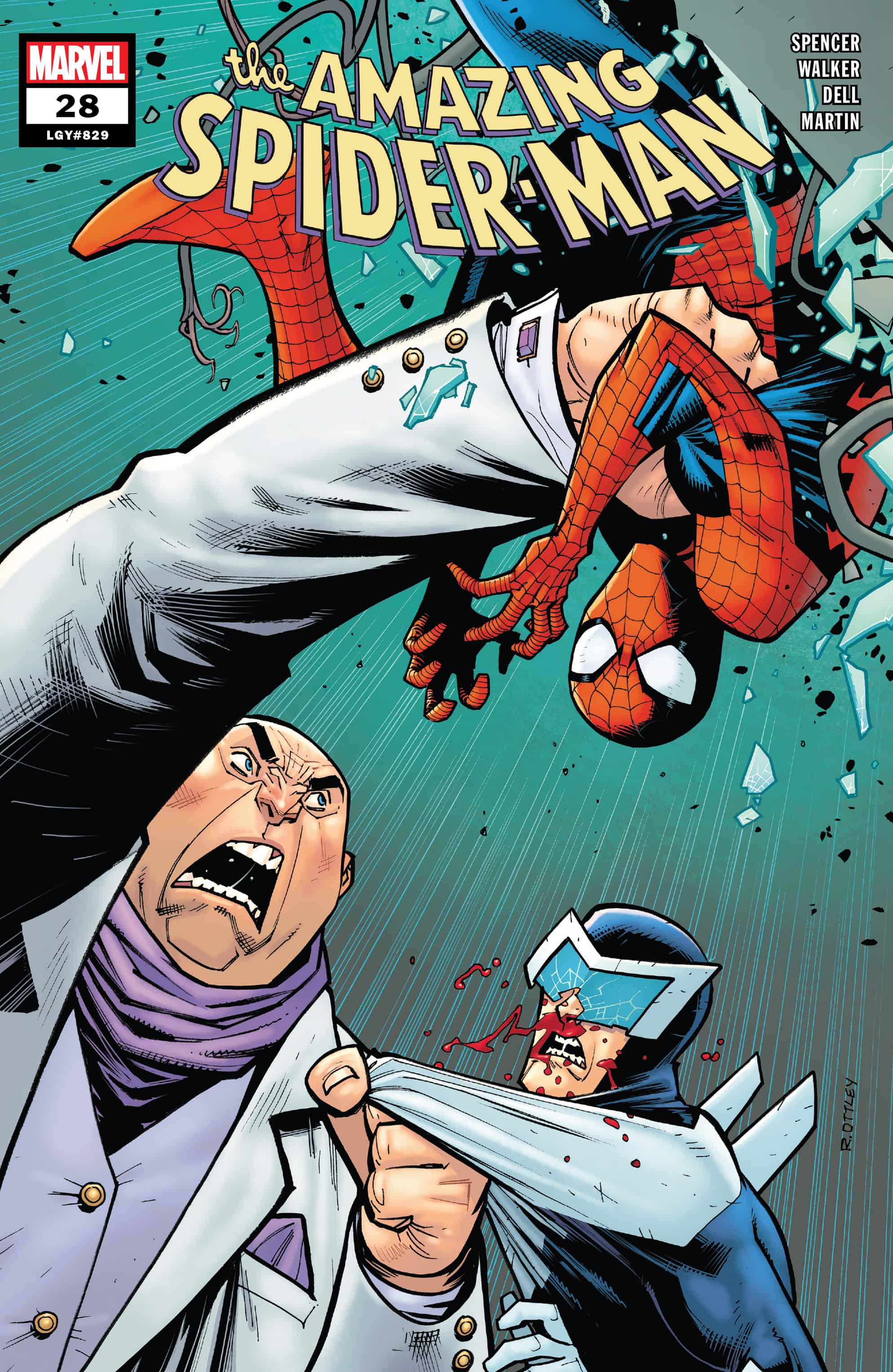 As it turns out, the bonds of sisterhood aren't worth much when your team leader is just as much of a double-crossing back-stabber as the Boomerang she claims to despise! Janice, a.k.a. the new Beetle, spills the beans to her increasingly-uncomfortable boyfriend Randy Robertson. 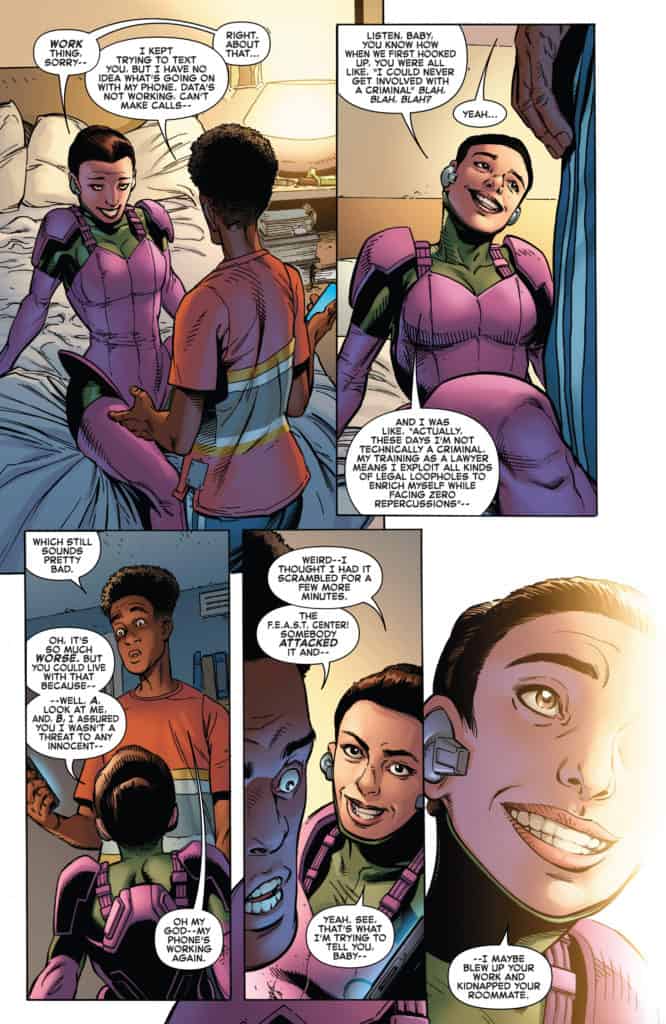 Frankly, though, he's far more concerned with the fact he's dating a supervillain. And that she tried to blow up his work! Beetle, of course, has covertly sold out her Syndicate sisters and plans to turn their captive, Boomerang, over to the Kingpin.

It doesn't take long for the Kingpin and a veritable legion of police to corner the motley crew! 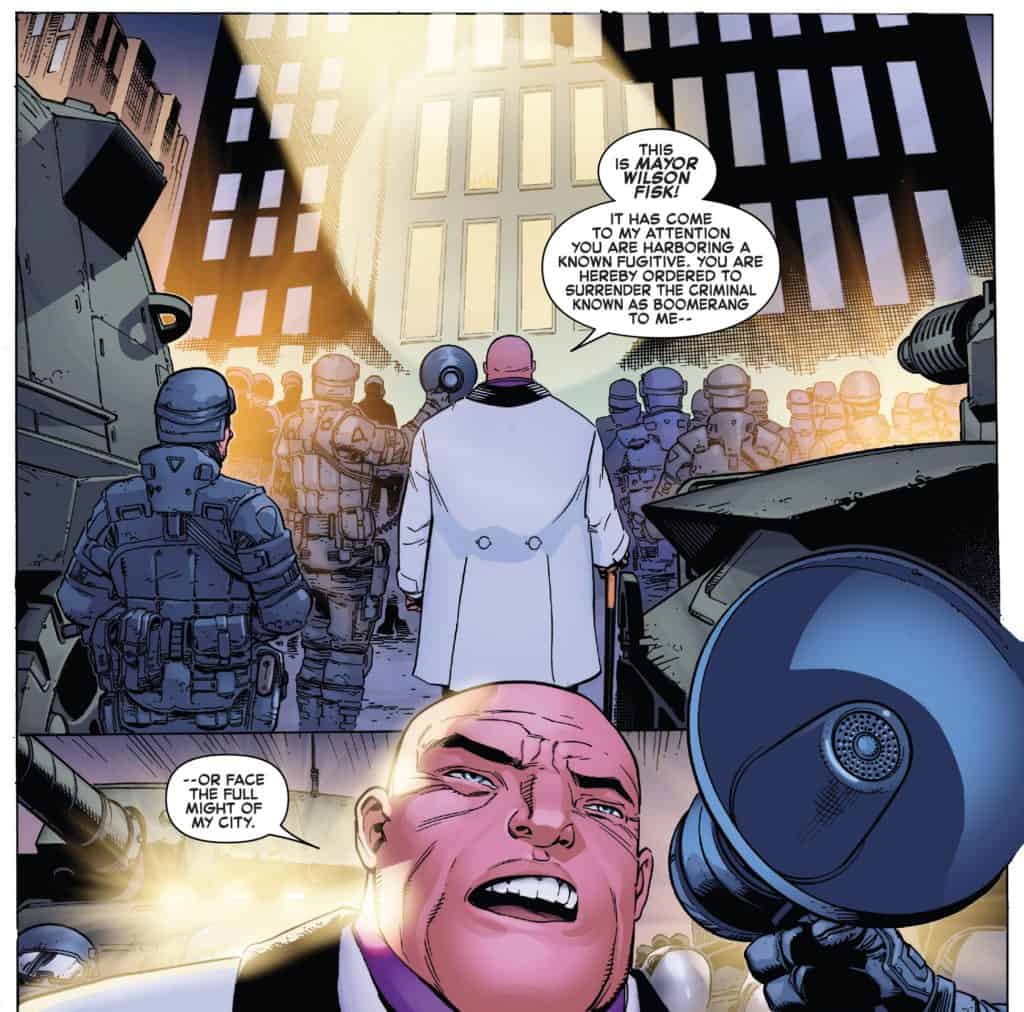 It's Spidey to the rescue! But against Fisk's army of cops, does he stand a chance? 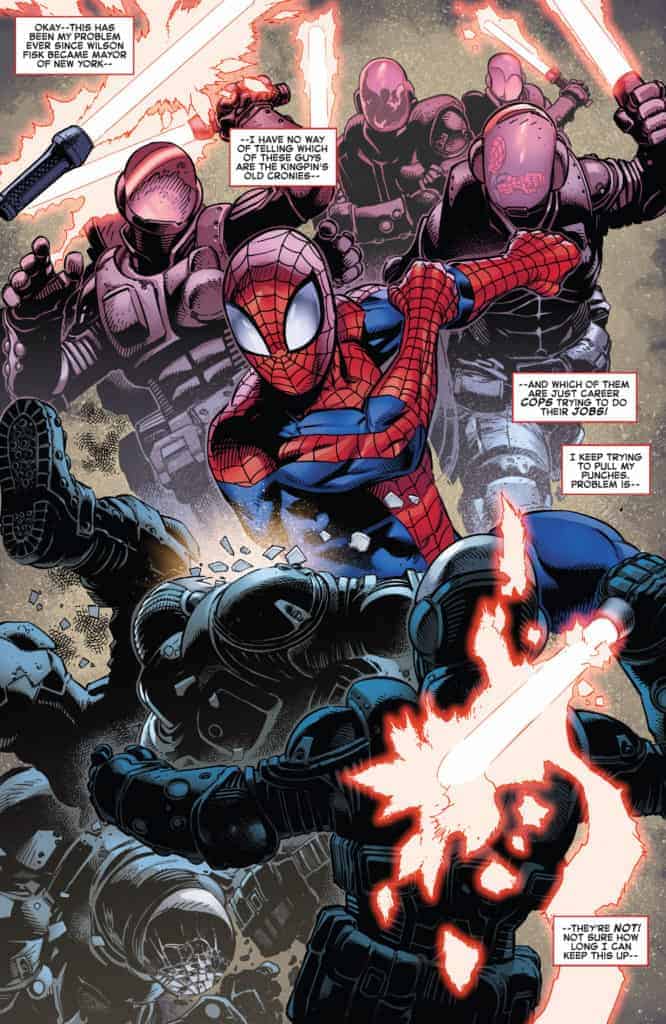 And what secret does Boomerang hold that will completely change everything?!

“Who Run the World?” comes to a twisty conclusion in Amazing Spider-Man #28, pulling all the various strings from the past two issues into a nicely fitting, if somewhat abrupt, ending. Unfortunately, a fun ending is derailed by distractingly mismatched art from Kev Walker.

Art is subjective. One person’s trash is another’s treasure… et cetera, et cetera. So while I don’t want to knock Kev Walker simply for having an art style that doesn’t appeal to me personally, on an objective level I have to wonder who thought he was a good fit for Spider-Man. Something with the tone of, say, Hitman or The Boys? His comedic, almost slapstick style would be perfect. But the world Spider-Man is not that. Yes, it has its comedic moments, but the levity is a means of counterbalancing the seriousness. And while “Who Run the World?” is definitely a lighter-toned affair than the recent “Hunted” arc, it still carries a certain amount of weight simply by being a Spider-Man story.

By contrast, Walker’s style is cartoony – somewhat rubbery, almost like a ’90s Jim Carrey movie set to pencils and inks. It’s not bad art by any means, but some of his choices – like giving Spider-Man big almond-shaped eyes or Kingpin’s eyes being slightly too far apart or making Randy Robertson look like a 12-year-old or Janice sans Beetle helmet look high A.F. – are distracting. In a goofier, lighter comic, these things might not matter so much. (And seriously, why do the cops have lightsaber-batons?) But this is Amazing Spider-Man, the grand poobah of all things arachnid. There’s a certain weight to be considered, especially when thinking about the artistic masters who have graced this book over the decades: Ditko. Romita. Andru. MacFarlane. Larsen. Bagley… the list goes on. A myriad of different styles, but they all had one thing in common: they were taking the subject material seriously. Walker’s art simply doesn’t convey that. By comparison, it’s more equivalent to a fan fic Spidey comic whipped up by a couple of stoners one lazy Sunday afternoon.

Similarly – Ryan Ottley’s cover art looks less like a serious comic and more like something you’d find on a children’s coloring book. Not necessarily bad, just ill-suited to this particular comic.

The art is weighted against the strengths of story, though. Nick Spencer – who has no shortage of criticism lobbed at him during his tenure on this book – really has played to his strengths through “Who Run the World?”. The low-stakes crime played for big drama and bigger twists, the faux-camaraderie between the Syndicate, the simultaneous riff on both toxic masculinity and knee-jerk feminism – has been refreshing, and right up his alley as an author. Honestly, this is the Nick Spencer Spidey comic I’ve been waiting to read. Not Nick Spencer pretending to be J.M. DeMatteis or any other writer he isn’t. Nick Spencer. He has a voice, and when he’s not trying to write to others’ expectations, he really shines. This arc has, joyfully, been one of those times. Please, Nick – let’s have some more of this.

Nick Spencer and Kev Walker's "Who Runs The World?" arc wraps up in a bonkers, fun, and zippy way that plays to all of Spencer's strengths as a writer. It's a shame Kev Walker's art is so wrong for this book, even though he is a decent artist - because the end visual result distracts from the quality writing.

Amazing Spider-Man #28: The Real Housewives of Evil (or Something)