Amazing Spider-Man: Going Big #1: With a Little Help From My Friends 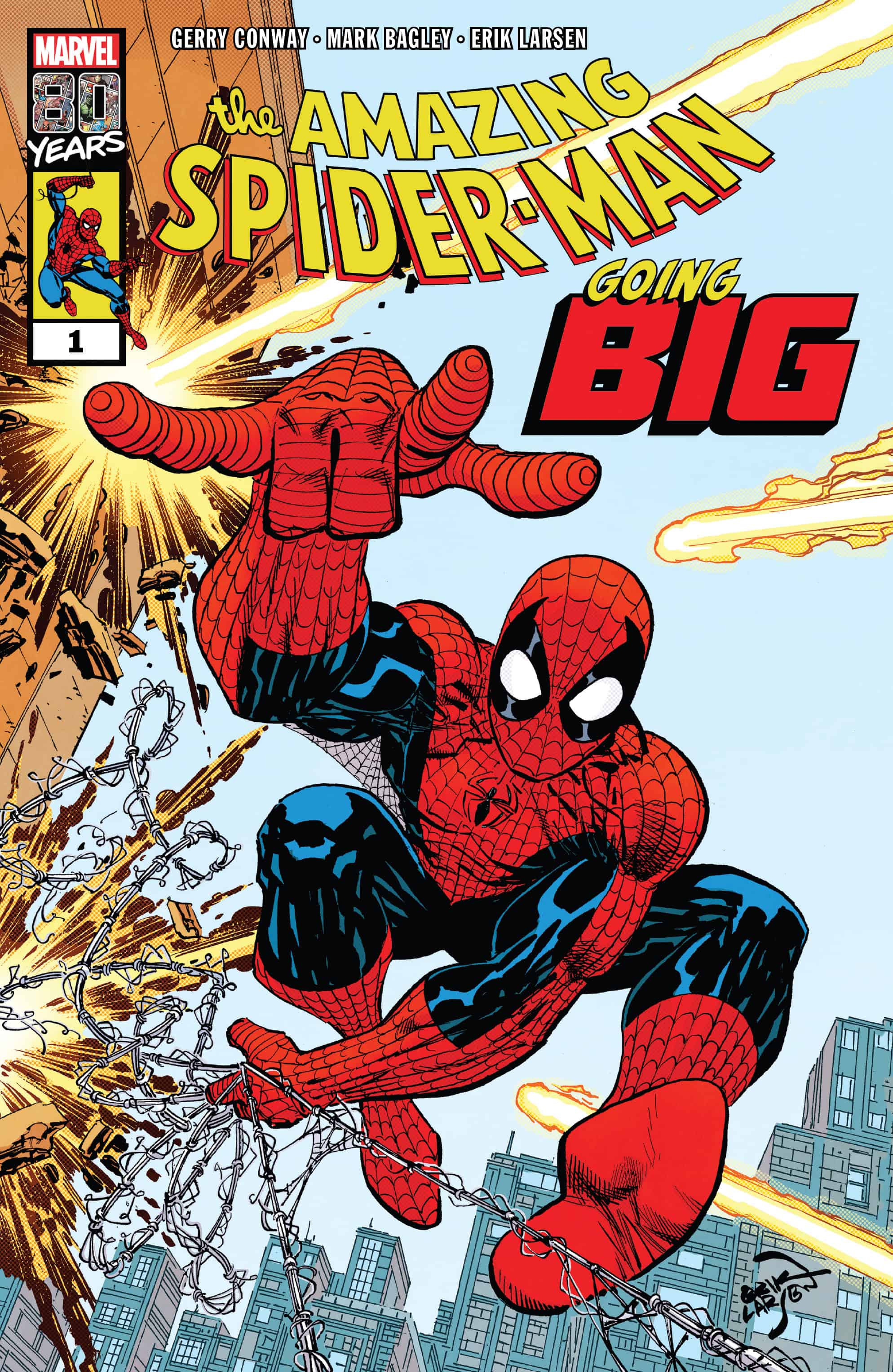 Story one, by legendary Spider-writer Gerry Conway and legitimate GOAT artistic contender Mark Bagley, features Spidey on the trail of Mary Jane's missing cousin Kristy, who has gotten wrapped up in an illegal immigration scheme with muscle provided by the Coyote! 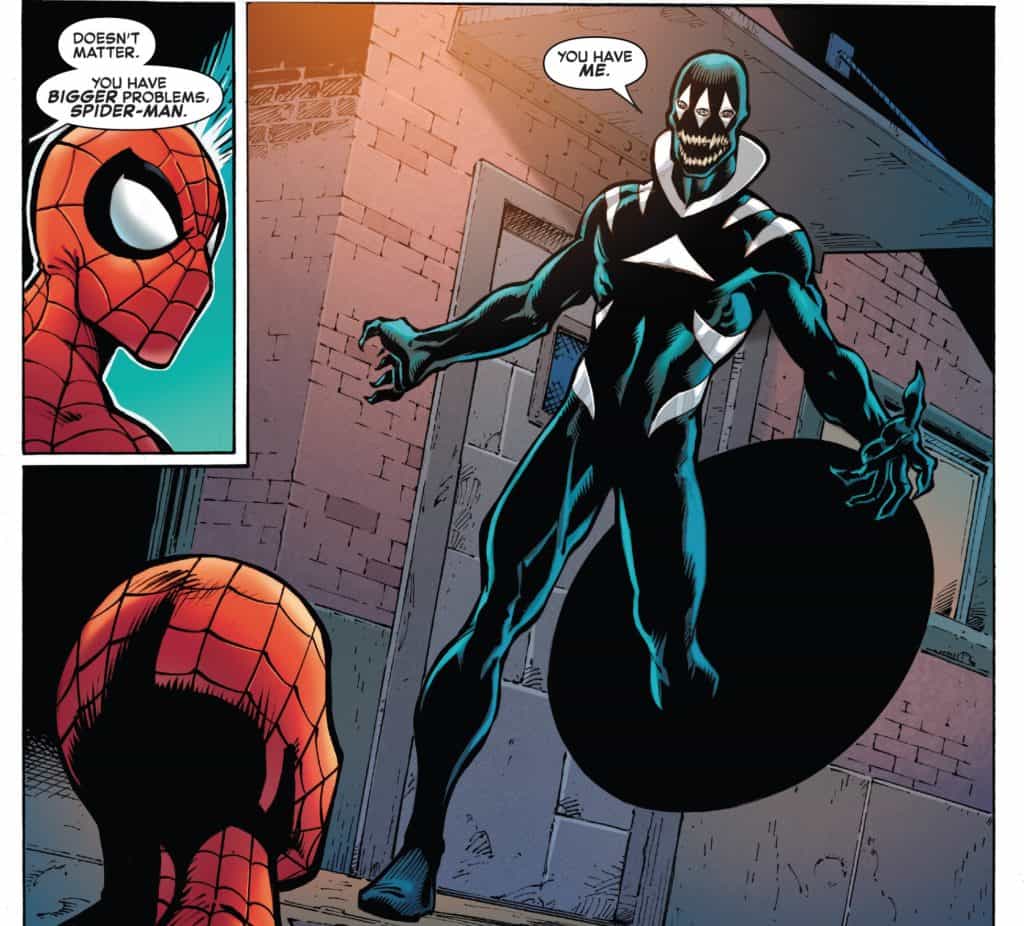 But someone else is on the human smugglers' trail as well... someone who has a far more lethal means of dealing with criminals than Spider-Man! 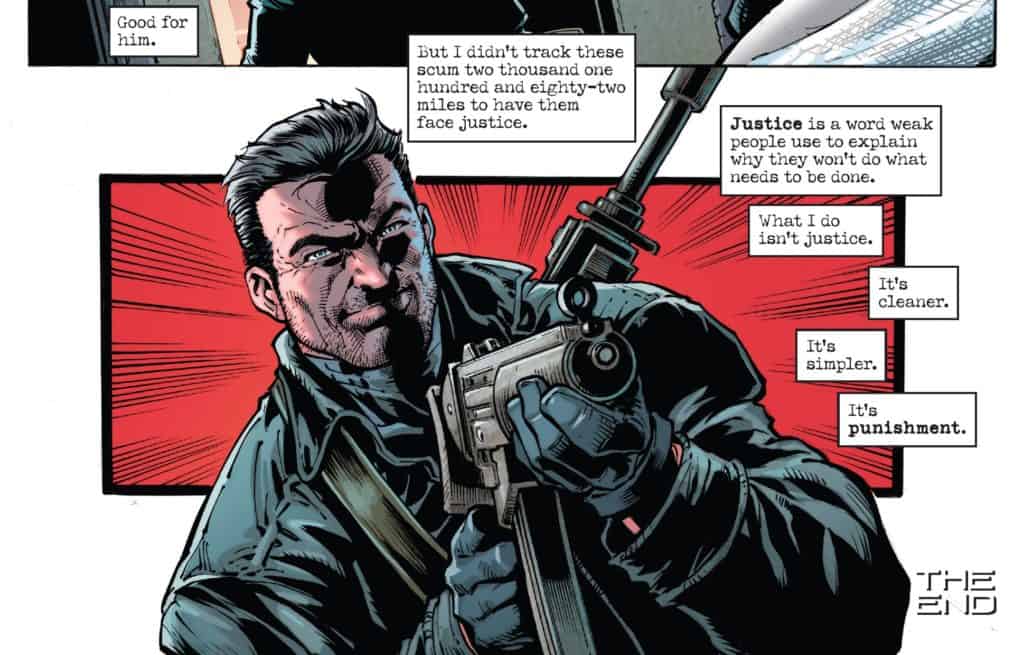 In the second story, by Ralph Macchio and Todd Nauck, features Spidey battling a cybernetic villain that has some allegorical parallels to a bully he handled as a young boy. 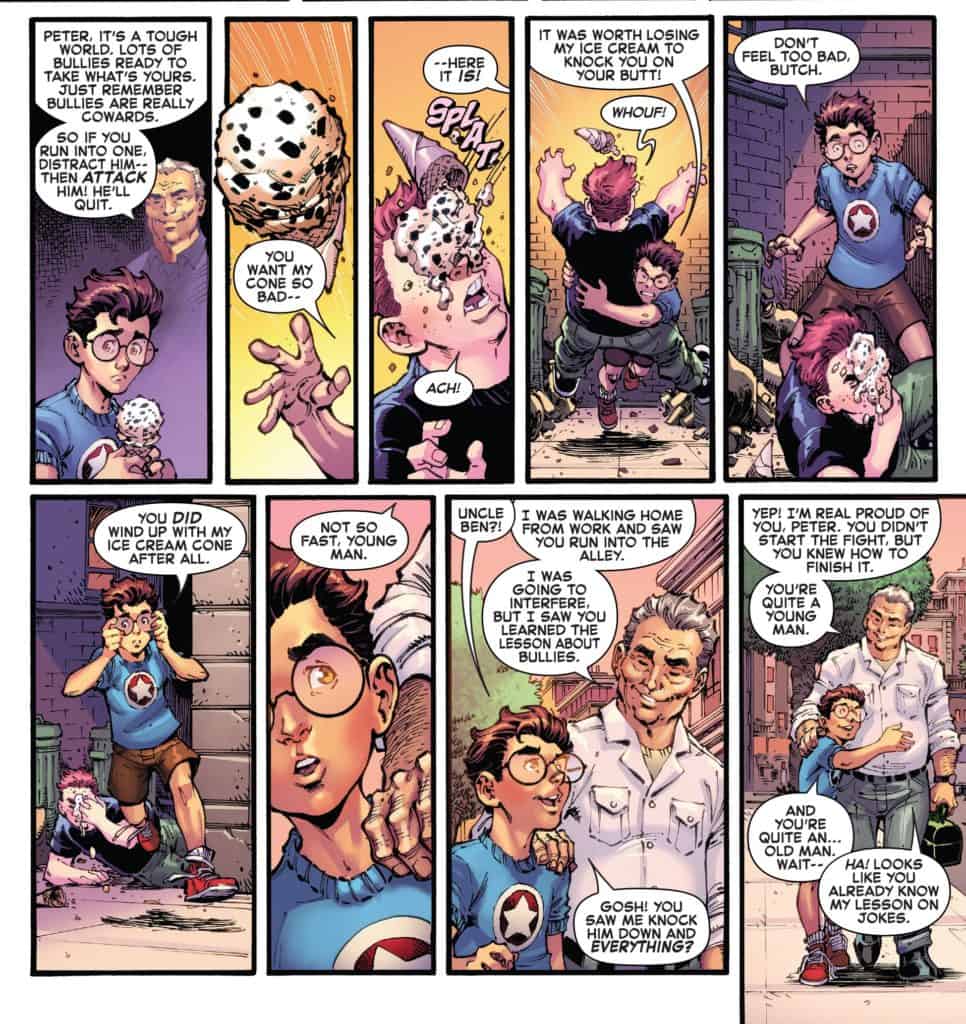 Finally, in the third and final story, Spider-Man goes up against the Queen of the Werewolves, as the ever-lovin', one-and-only Erik Larsen swings back to write and draw the tale! 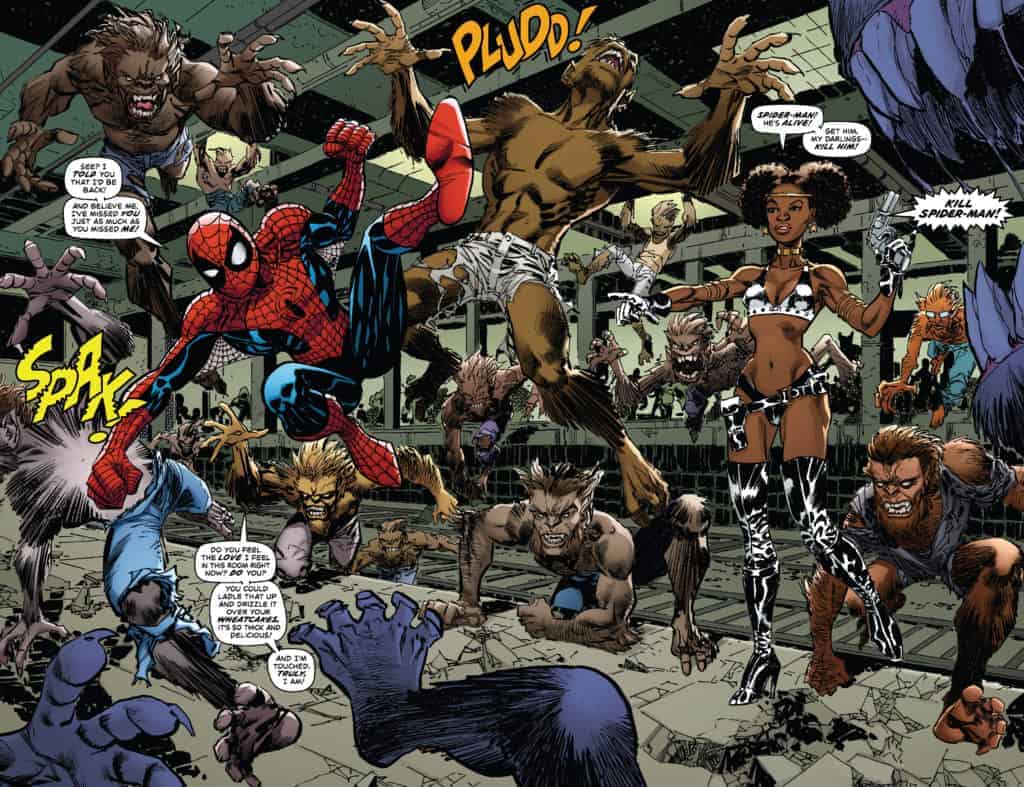 As far as big, sexy anniversary statements on Marvel’s marquee – and defining – character, Amazing Spider-Man: Going Big falls a bit short of the intended mark. Gerry Conway, Mark Bagley, and Erik Larsen all have their places in the hallowed halls of Web-Head History, but there’s a lack of cohesiveness in this issue makes it feel less like a major statement and more like a random collection of tales for the heck of it. Although there’s no story that’s particularly bad, per se, no one feels like it completely rises to the occasion, either.

Of all associated creators, it naturally falls to Gerry Conway to take the lead. Conway was, of course, hand-picked by Stan Lee to succeed him on Amazing Spider-Man at the ripe-old age of nineteen. He’s had two major tours of duty, both of which are fantastic, but the first of which included the deaths of Gwen Stacy and the Green Goblin, the debut of the Punisher, and the original clone saga. That’s quite a stacked deck. His second tenure, though not as historic, spanned both Spectacular and Web of Spider-Man, introduced Tombstone and the Puma, and was a high water mark for the time.

His story here, featuring a social commentary on human trafficking and our current immigration crisis, is well-intended, but also not particularly memorable. Readers would do well to remember the villain – Coyote, from one story in Mark Waid’s seminal Daredevil run a few years back – stole Spot’s teleportation powers and is now using them as muscle for the traffickers in question. All this and the Mary Jane’s niece Kristy, too – who probably isn’t well-known to modern fans, but to those of us of a particular vintage, will be remembered form the author’s anorexia subplot and then subsequent disappearance once he left Spidey’s world for a second time. Don’t expect any sort of closure to the character’s arc from way back when, but it is a nice tip of the hat to a character that vanished with the change in creative team. All this and the Punisher, too – because why on earth wouldn’t Conway want to revisit his most famous creation? The story itself is fun, and gives Mark Bagley lots of fun Spot-esque visuals to play with: 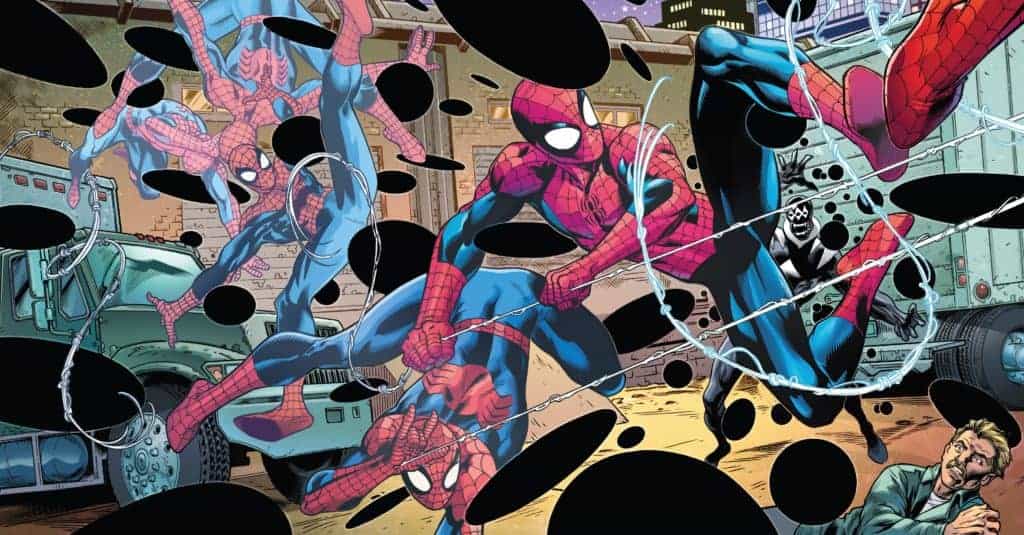 There’s a reason Bagley is one of the best. Spidey. Artists. Ever.

So while the story itself is less than memorable, it’s fun, and allows both writer and artist room to flex their respective creative muscles. I wish I could say the same about the second story, courtesy Ralph Macchio and Todd Nauck, which, while trying to impart the importance of Uncle Ben, is about as deep as a puddle on an upside-down bowl. Neither creator is particularly tied to Spider-Man’s creative history, and the story itself is almost the definition of filler. The whole forgettable affair is over in a mercifully brief four pages.

Lastly – and perhaps, where the fanfare lies most – Erik Larsen returns to the character that made him famous, whipping up a fun, light-headed little tale featuring Spider-Man versus werewolves, and then consequently forgetting to bring movie tickets to his date with Mary Jane. And it’s great. Sounds like it’s nothing, but the energy and pure fun put into the story makes it the best of the bunch, perfectly capturing the Spidey/Peter Parker dynamic, and how the former always interferes with the latter’s life. Larsen’s art has changed a lot over the years, but it’s still recognizably his. He brings a bit of Simonson to the mix on a regular basis, and is a treasure both for the industry and the hallowed history of Spider-Man. 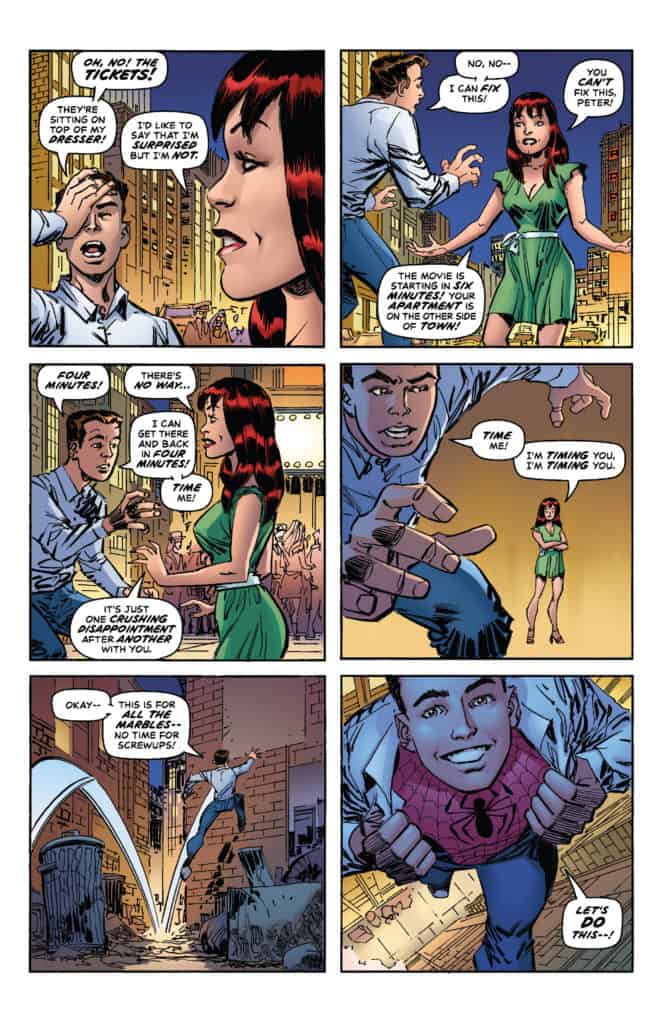 Though not perfect by any means, Amazing Spider-Man: Going Big (in which nobody really goes big, but I digress) is nonetheless a solid collection of arachnid-centric tales (with the exception of four pages in the middle). It's fantastic fun to see Gerry Conway, Mark Bagley, and Erik Larsen back to swingin' with ol' Web-Head, even if the end results aren't exactly earth-shaking.

Amazing Spider-Man: Going Big #1: With a Little Help From My Friends