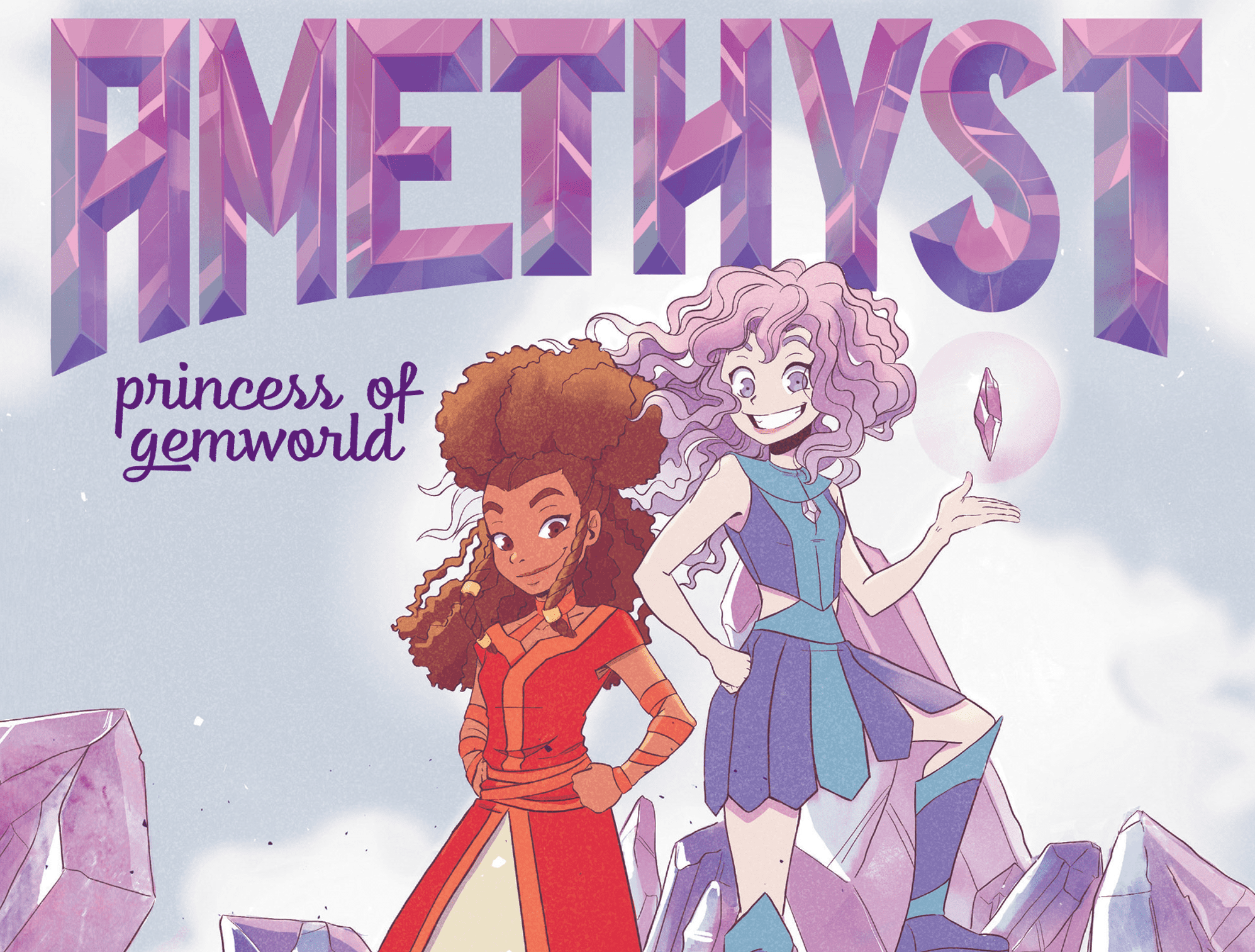 Princess Amaya of House Amethyst of Gemworld isn’t the most well-mannered young princess. After she and her little brother play one magical prank too many, Amaya’s parents punish her by forcing her to spend one week on Earth, a world with no magic. An accident causes her parents to lose contact with Amaya, stranding her on Earth, where the lack of magic swiftly erases her memories of her true home. Three years later, Amaya is transported back to Gemworld, only to find that her family is missing and a grave danger is taking over the land. With her Earth best friend Autumn by her side, Amaya embarks on a mission to find her family and save Gemworld.

In Amethyst: Princess of Gemworld, Shannon Hale, Dean Hale, and Asiah Fulmore deliver a bright and imaginative story about a girl who discovers that she’s a magical princess and goes on an adventure with her friends to save the day. The Hales are old hats at writing lovable young female protagonists for a child audience, having written Diana: Princess of the Amazons for DC in 2020. They nail it here with Amaya, who is smart, irreverent, caring, and brave: in short, the kind of kid whom kids themselves would want to hang out with. Amaya’s best friend, a girl from Earth named Autumn who accompanies her to Gemworld, is a similarly delightful character. The two girls squee over the elaborate castles and winged horses of Gemworld and marvel at the transformation of Amaya’s sword pendant into a full-size magic sword. The girls are accompanied by a boy from Gemworld called Topaz, who provides them with helpful information about Gemworld and what has happened in Amaya’s absence. As Topaz explains, Amaya’s family has mysteriously vanished and the world is being terrorized by a destructive monster called Flaw and his mindless minions. Topaz is nervous and awkward, but quickly becomes close friends with Amaya and Autumn as the three of them devise a way to stop Flaw.

Fulmore is newer to comics than the Hales, but her work on the graphic novel shines just as brightly. Her art is dreamy and playful, perfect for the fairytale ambiance of the story. Her colors alone communicate a lot of storytelling, with Earth rendered in duller tones while Gemworld is depicted with brighter colors. Perhaps the most delightful aspect of Fulmore’s art is the personality she brings to the characters through their expressions. The facial expressions she draws are wacky and unique, clearly manga-inspired but very much her own style. They inject energy and life into the story, and show us who the characters are and how they are feeling. Another joy of Fulmore’s art is the fashion, and particularly how it changes between Earth and Gemworld. Amaya and Autumn wear chic but ordinary clothes on Earth, but when they are transported to Gemworld, they find themselves in elaborate, brightly-colored gowns. Even their hair is different, becoming long and luscious in Gemworld. It is details like these that enhance the story and make Amethyst: Princess of Gemworld such a fun read.

Though the plot is a bit trite, the well-defined characters and the heartwarming themes of friendship and family keep the story engaging. The story takes joy in showing the kids working together to save the day with help from adults, which is something young readers will certainly enjoy as well. Yet the importance of family is also stressed, as Amaya searches for her missing parents. Overall, Amethyst: Princess of Gemworld is a fun, feel-good adventure with a lot of heart.

Amethyst: Princess of Gemworld is a well-executed story about a young girl who rediscovers her magical homeworld and works with her friends to save the day. The writers make the young characters feel believable as kids, while the artist brings a dreamy ambiance to the story and conveys the characters’ personalities through their expressions and outfits. Every kid dreams of magical worlds, and kids reading this graphic novel get to live that dream vicariously through Amaya.