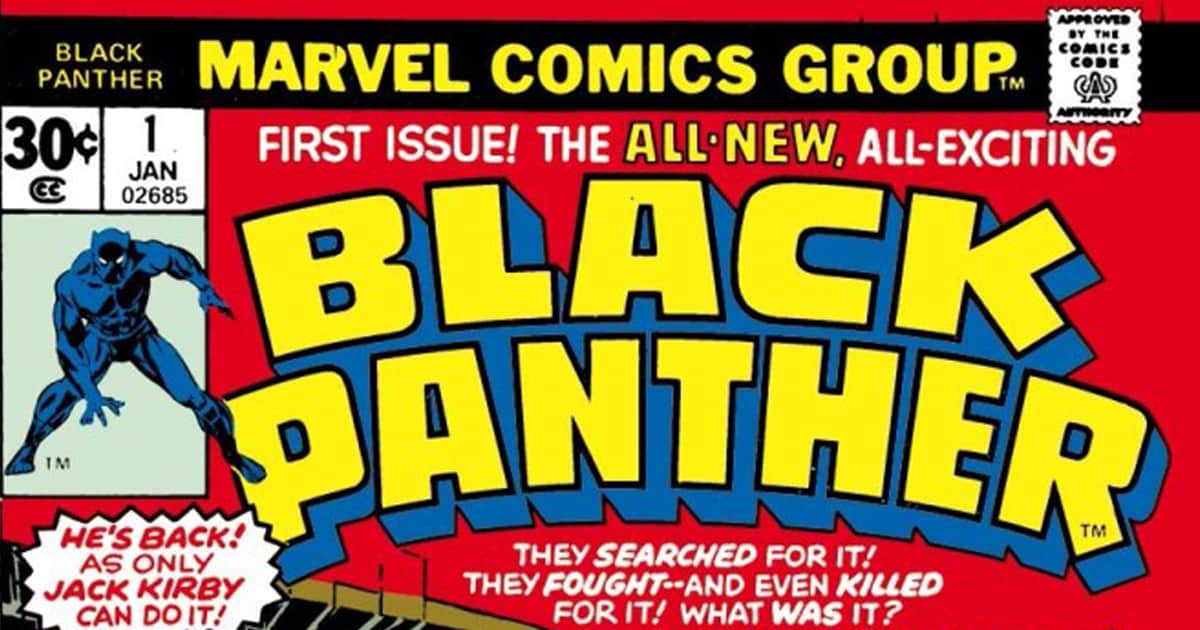 A little bird told me there’s a movie out this week, and it’s Black History Month, as such this weeks edition of Ancient History is devoted to none other than the Wakandan Warrior who protects the people he presides over, Black Panther! 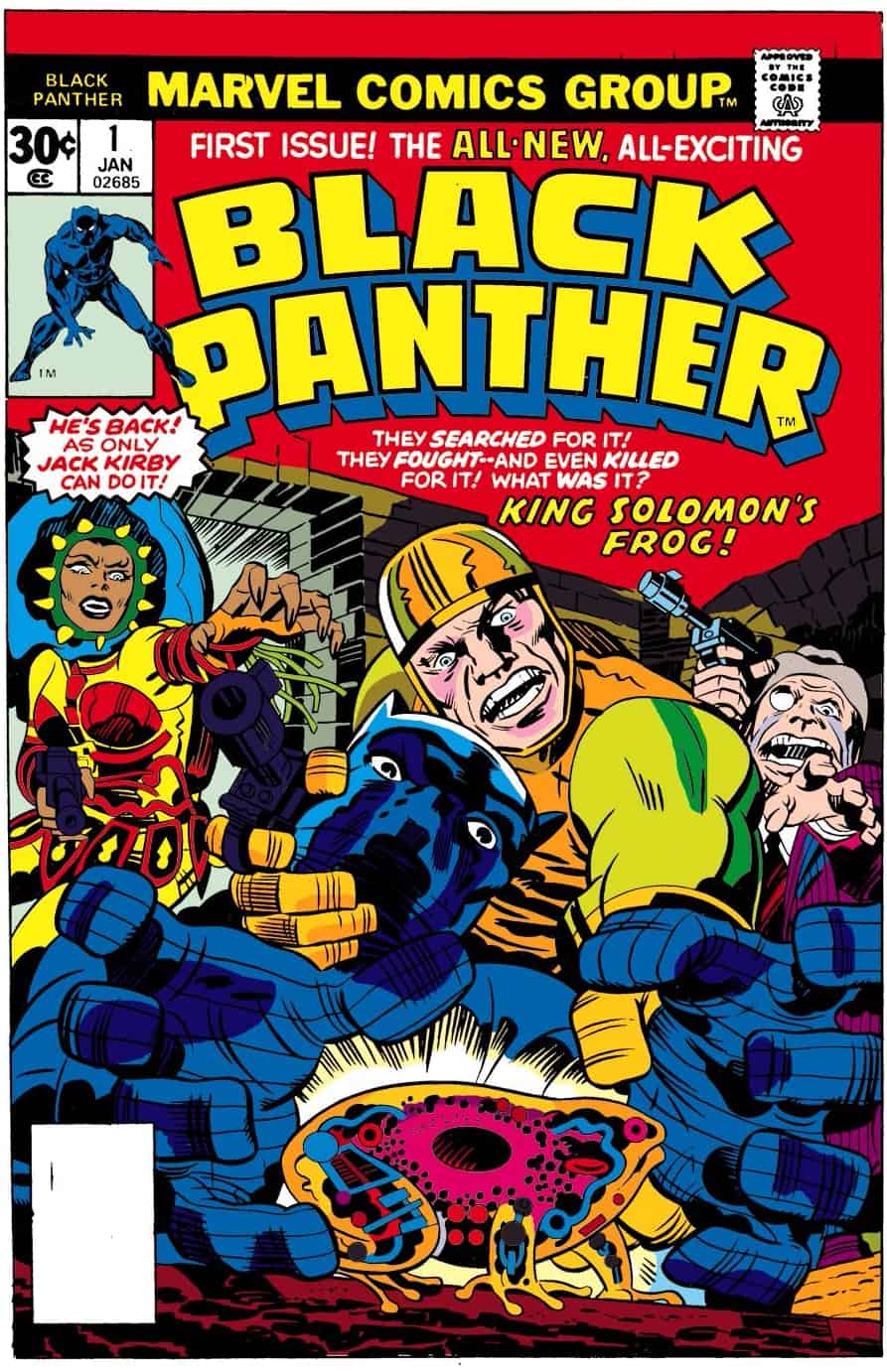 What You Need to Know:
Black Panther is the mystically enhanced, billionaire, insanely well equipped, genius king of Wakanda. At this point in his history, he has met the Fantastic Four and the X-men and been an Avenger (I believe he’s off the team at the exact stage this book takes place in) on top of his kingly duties. This is his first solo series.

We open on Black Panther and a little man with a monocle walking into a room with a dead man holding a gold frog. The room is a treasure trove of otherworldly artifacts, and it is torn asunder by an unknown assailant, and the dead man, Alfred Queely, has been run through with a sword!

The little man, named Mr. Little (I love the silver age haha) says the frog is responsible for Queely’s death, much to Black Panther’s disdain. Suddenly an unseen figure with a sword attacks the pair from behind! T’challa fights the armored figure ably, and the assailant jumps out the window and runs away! 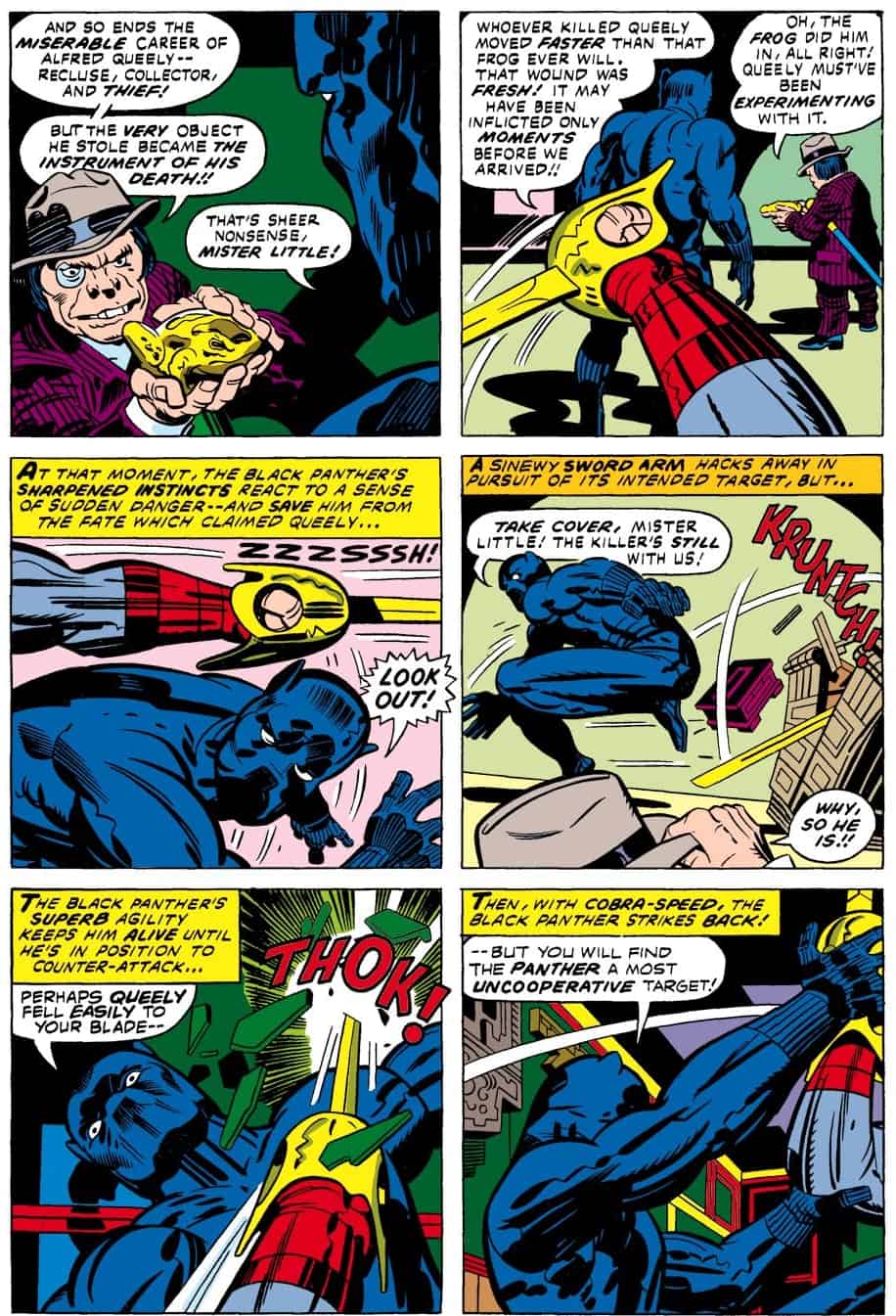 T’challa turns back to Mr. Little, who tells him the attacker was transported from the past, the frog is a time machine! Whoever tampers with it is fated to be killed by whatever the frog pulls from the annals of history! The two hop in a nearby helicopter and take off, as they fly they discuss the plan. Little wants to return the frog to King Solomon’s tomb, which is long lost to the ages! Suddenly a strange airship swoops up behind them, it opens up a giant door and tries to scoop up the copter! 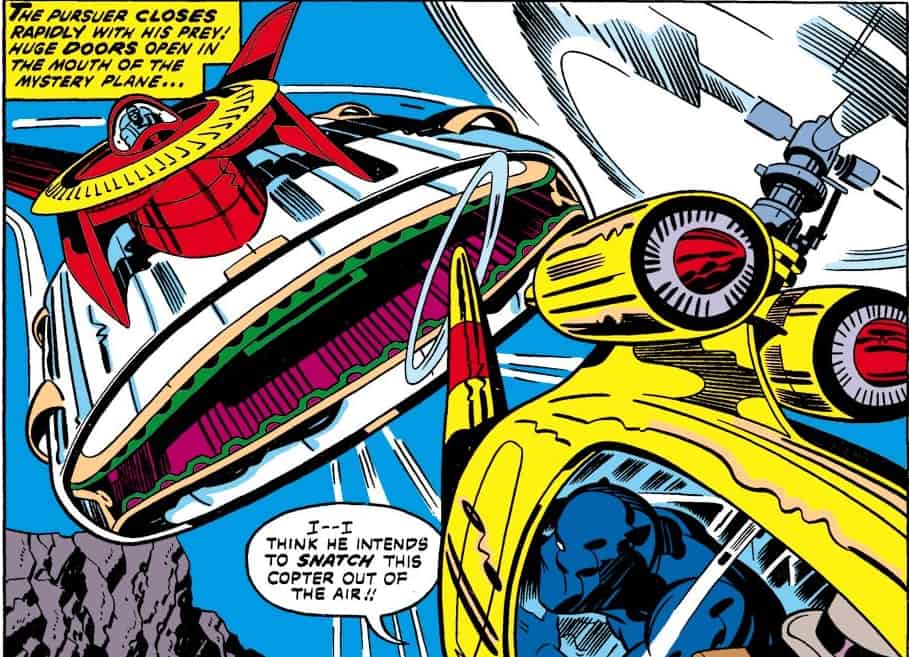 Suddenly Mr. Little fires a pair of missiles into the attacking ship and destroys it. Little assures Black Panther that his craft is the best, and continues the story, throughout history, there are stories of people and monsters that don’t seem to belong, from the Loch Ness Monster to Merlin. (Who interestingly was in a much earlier issue of the Avengers and was eventually revealed to be from the future) Suddenly they’re attacked again by a group of soldiers with jetpacks (even the sky isn’t safe!) Mr. Little activates a jet booster and takes off! 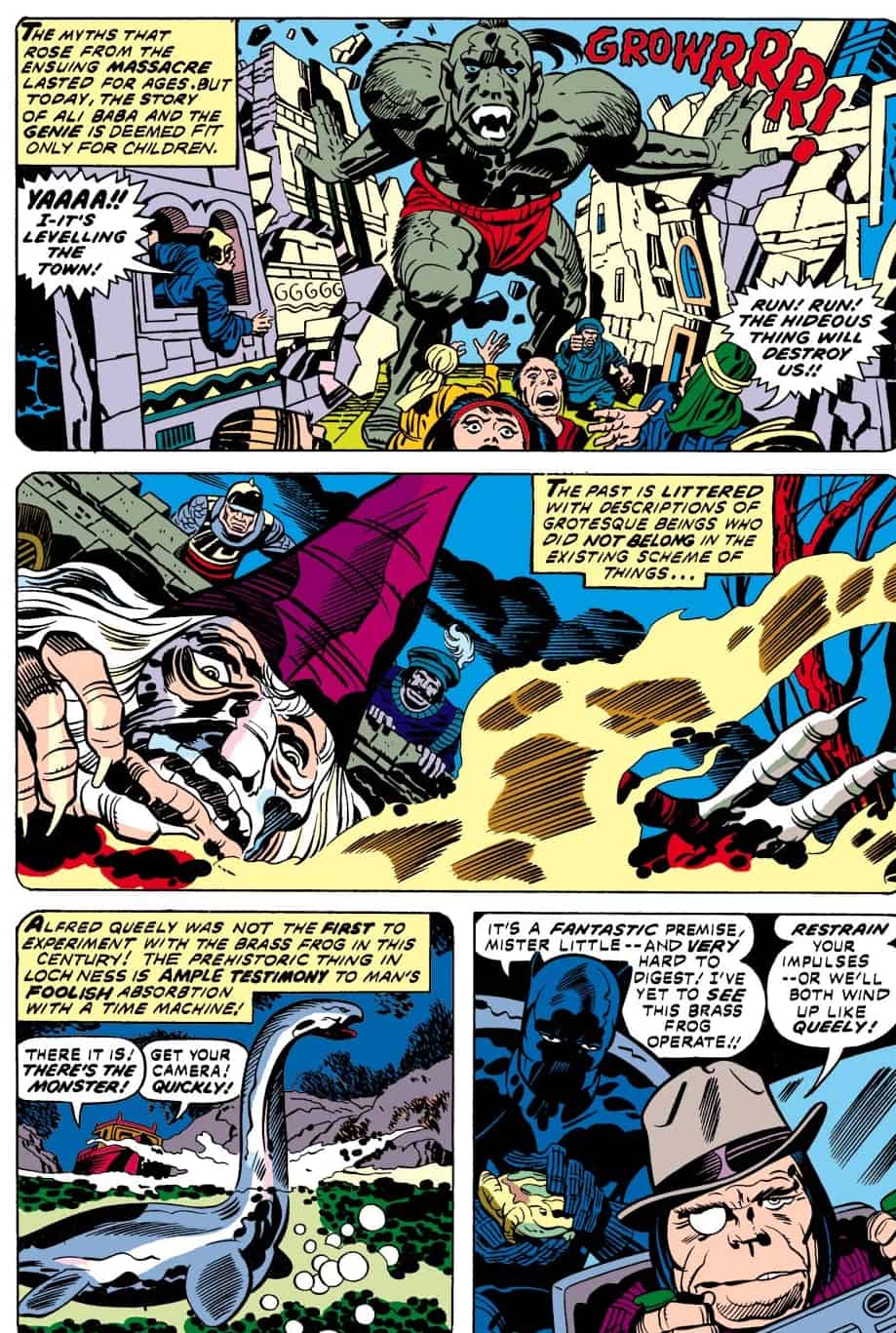 They make it back to Little’s base, inside an extinct volcano (who’s side is he on again?) as they walk in Panther tells little he senses someone nearby! A shot rings out and Little is hit! Black Panther leaps to action to avenge his fallen friend! As he rains blows upon his enemies a ray strikes him, causing him to fall to the ground in pain. Suddenly his enemy reveals herself, Princess Zanda! 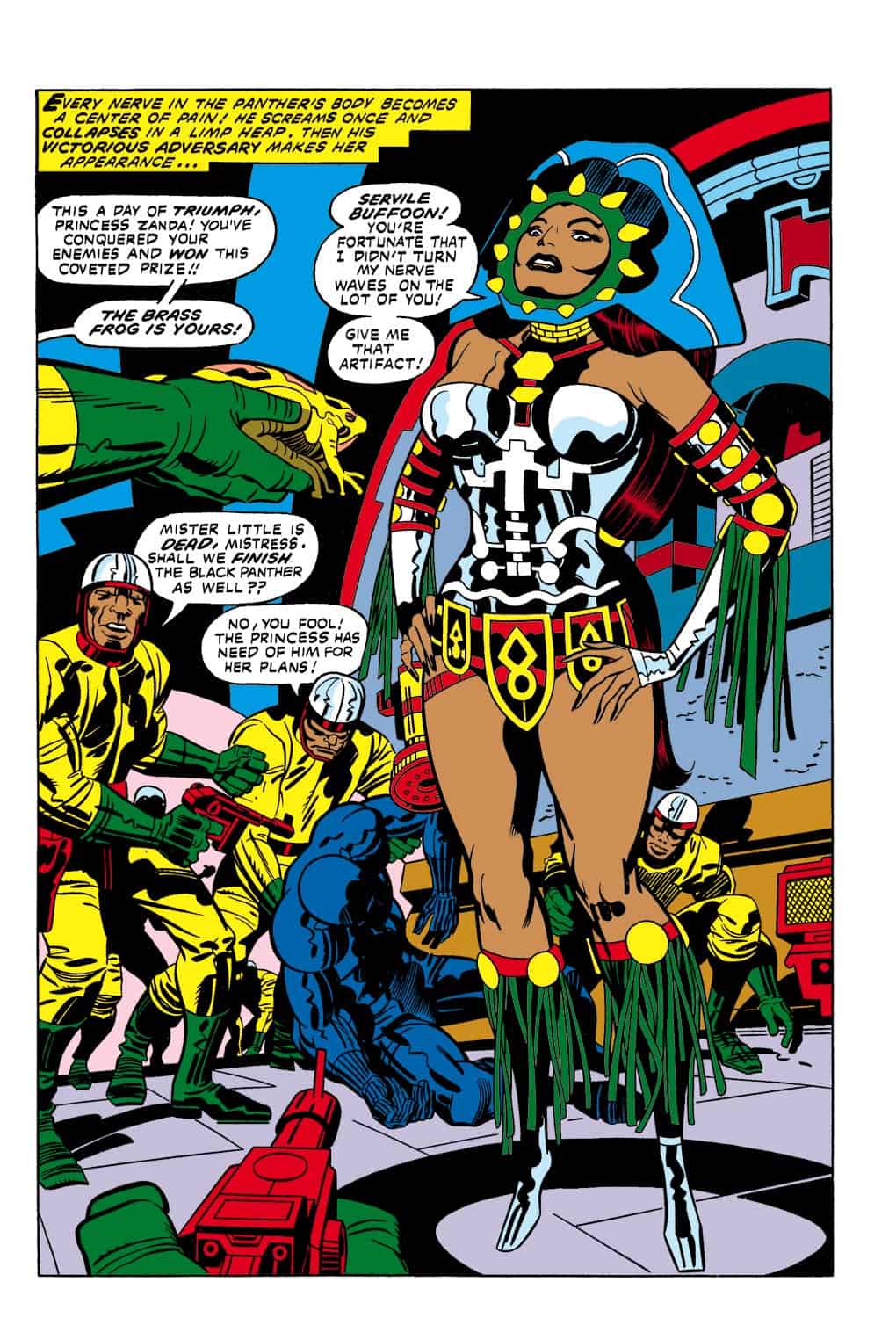 Zanda says that inside Solomon’s tomb are instructions on how to make the frog work properly, and whoever unlocks it can use its power for anything! Panther kicks the frog out of Zanda’s hand and catches it, saying he’ll smash it before they get the chance! One of Zanda’s men shoots the frog out of is hand, as it hits the ground there’s a flash of light! A bizarre figure walks out of the flash! What could it be?!

I’m actually not sure what the thing is, maybe one of you guys will read this series and tell me?

I wasn’t 100% sure what to expect from this issue, it was pretty good, but not the globe-trotting superhero I might’ve liked to have seen, this could’ve been literally any hero from the Phantom to the Shadow. There’s literally no mention of Wakanda or any of the tech or wisdom the T’challa is known for nowadays. I’d say the writer is unfamiliar but Jack Kirby created the character, this character obviously changed into something more than he was made out to be in the beginning. That said this is the first time Marvel gave a black hero a solo series and predates Black Lightning (DC’s first black hero to get a solo series) by 3 months.

The artwork by Jack Kirby was pretty good, albeit a little on the pedestrian side for the King. I’m pretty deep into his Thor run right now so I might be biased but this isn’t the best work I’ve seen from him.

I did like the idea that a lot of the mysterious appearances of historical weirdness could be due to the frog, (Loch Ness Monster especially) and can appreciate the motive of stealing stuff from throughout history, hardly a novel idea, (look at Kang the Conqueror!)but a decent one.

I will say despite his popularity now, and some minis here and there, Black Panther was largely a lower tier character, there aren’t a ton of great silver age stories with him that I’ve seen. (I’ll read his Avengers run and try and find a good issue in a couple weeks)

Decent issue for what it is, but a new fan will be very confused, and a dedicated fan likely won’t find anything that matters in terms of canon. I’d sadly call it skippable.