Hello again Watchers! It’s time for another edition of ANCIENT HISTORY! The only comic review series in this town (or any town!) that reviews classic comics based on your suggestions! Have a classic comic (pre-1980) that you love and want me to review? Tell me so in the comments, or private message me (John Jack) on Facebook!! If I can find the comic I will read and review it and share YOUR name! Come be a part of the winning team, the comic watch house of ideas!!!! Now looking for freelance writers for a variety of subjects!

Super-villain team-up is it book where wouldn’t you guess it two of Marvel’s great villains come together towards a common goal, or face each other in battle! This week’s edition features The Marvelous Doctor Doom himself and the scourge of the X-Men, the Menace of mankind, the master of magnetism, the masterful Magneto! 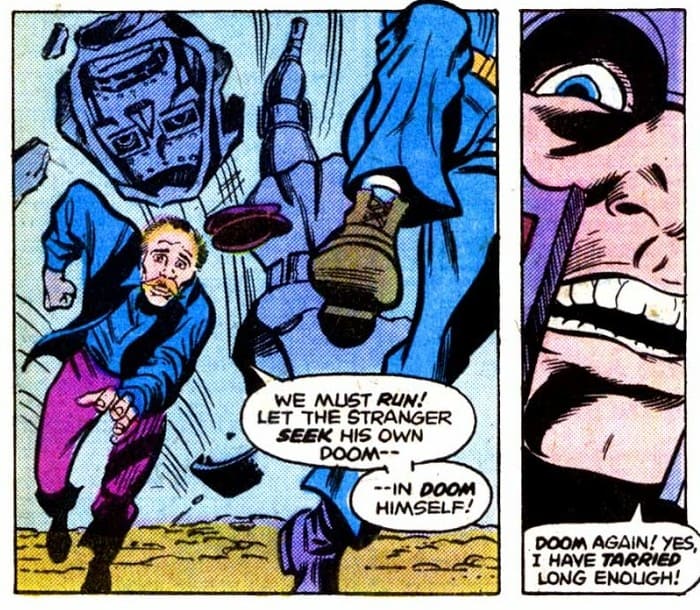 Everyone knows about Magneto’s altruistic, although somewhat misguided motives for the betterment of mutant kind, in this week’s edition of Ancient History we see him at odds with the planet-conquering goals of the villainous master of evil, Doctor Doom! 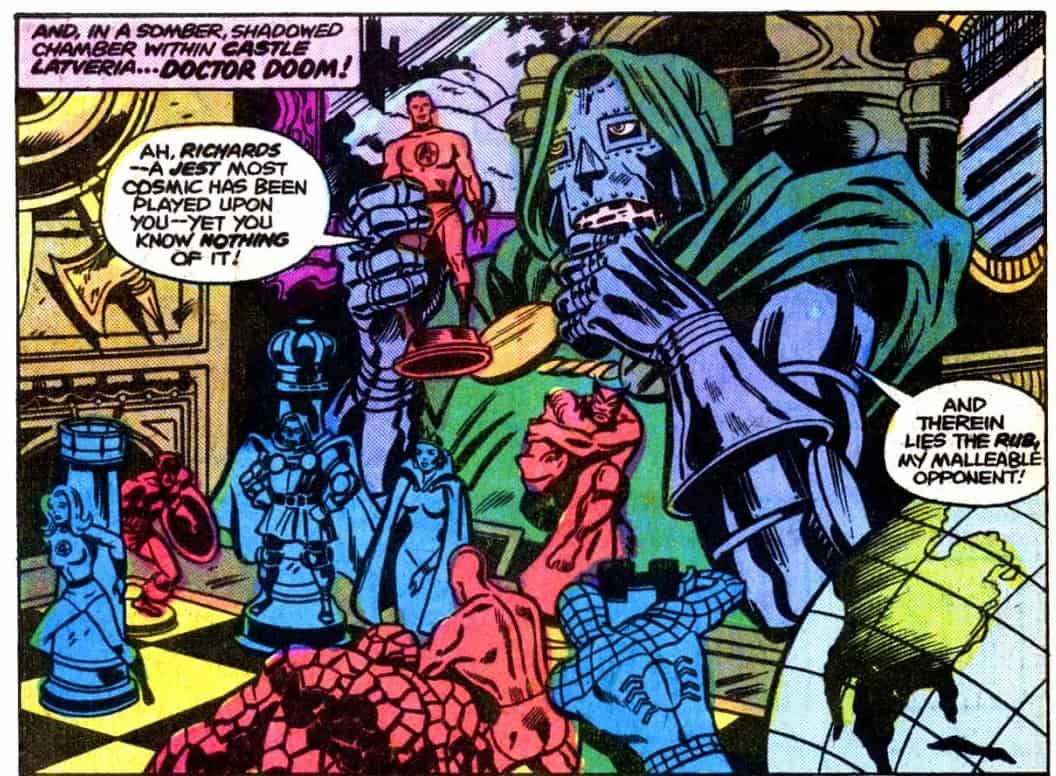 We open on Magneto walking down the street in Latveria, the kingdom of Doctor Doom. There is a celebration in the streets at the victory of Doctor Doom over the Red Skull, Magneto is annoyed at the holdup and shoves his way through the crowd. This catches the attention of an officer in Dooms Army, he tries to stop the Mutant Menace, who rewards him for his trouble by throwing him across a courtyard. 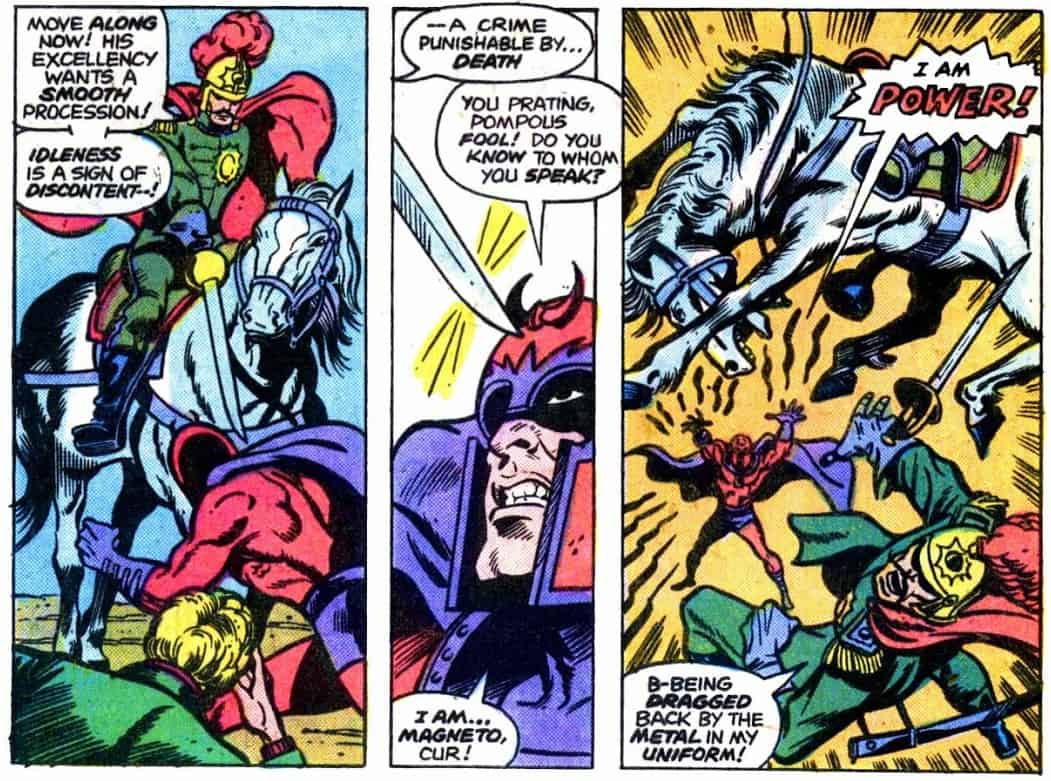 The crowd begins to show signs of discontent and ask Magneto to stop ruining the festivities, Magneto’s are enraged at their lack of fear in his presence and lifts a giant statue of Doom with his magnetic powers and destroys it throwing the pieces at the crowd.

He makes his way to Doom’s castle where Doom is playing with a chess set shaped to look like various superheroes and villains. Doom is enraged at the interruption and threatens to kill Magneto where he stands. Doom asks Magneto how he is standing there as an adult as the last time we saw him he was a baby (defenders #16) Magneto explains that he was restored to adulthood by Erik the Red sometime before (X-Men 104) 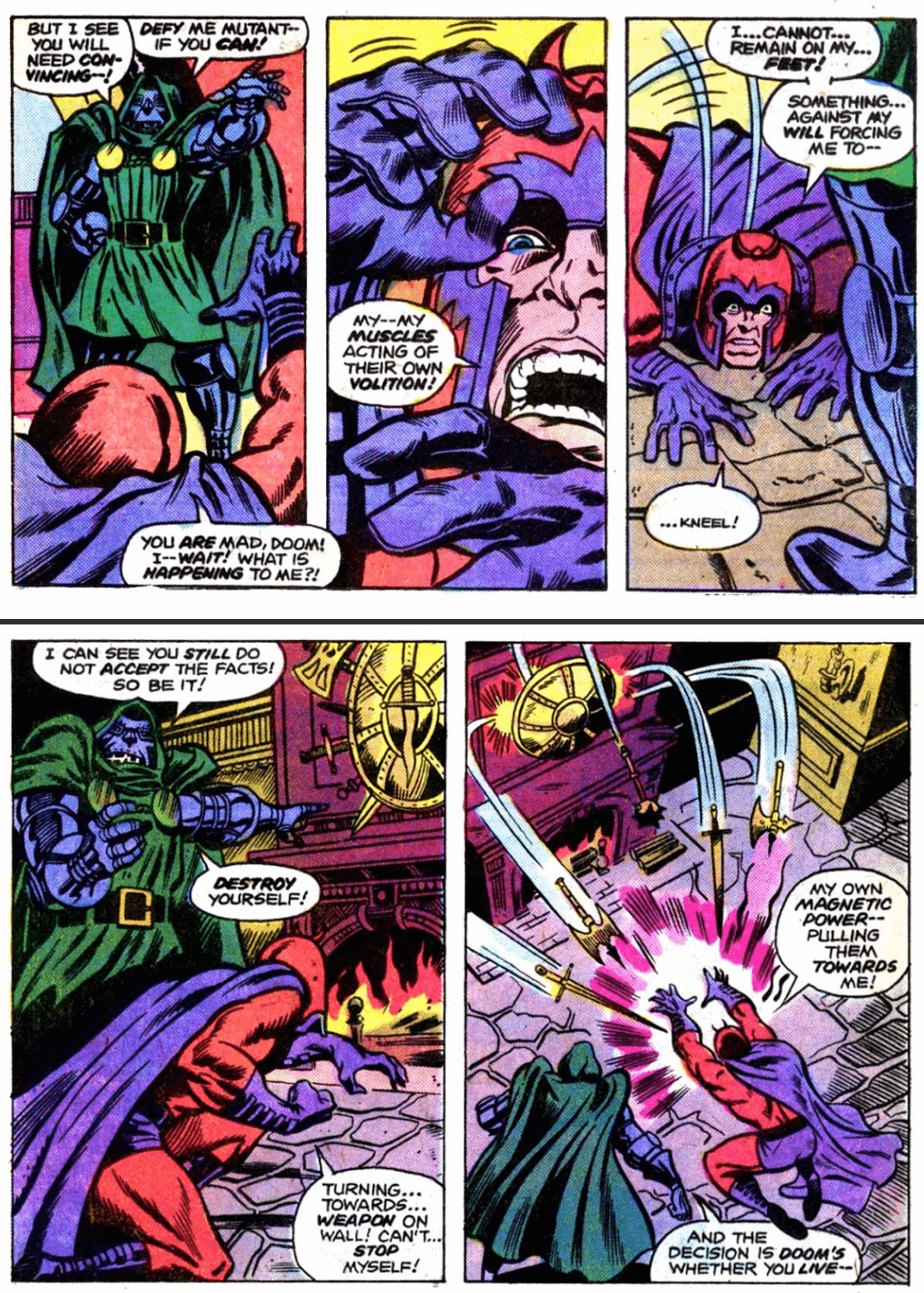 Magneto says he wants to make a plan with doom to rule the world. Doom calls him foolish and says he already has the world he just hasn’t bothered to take it yet. He shows Magneto his neuro-canisters which contain a gas designed to mind control the entire population of the Earth. Magneto remains unconvinced so Doom challenges him to defy his command to kneel, Magneto is unable to do so, at which point Doom tells Magneto to destroy himself. Magneto seizes various weapons off the walls and begins to hurdle them at himself, Doom barely giving him time to protect himself.

Magneto asks why Doom doesn’t simply seize the planet, Doom replies he doesn’t want the planet what he wants is a challenge and as such he is returning Magneto’s will to him to leave someone powerful enough to challenge him. He then drugs Magneto and transports him to the US, specifically Avengers mansion. 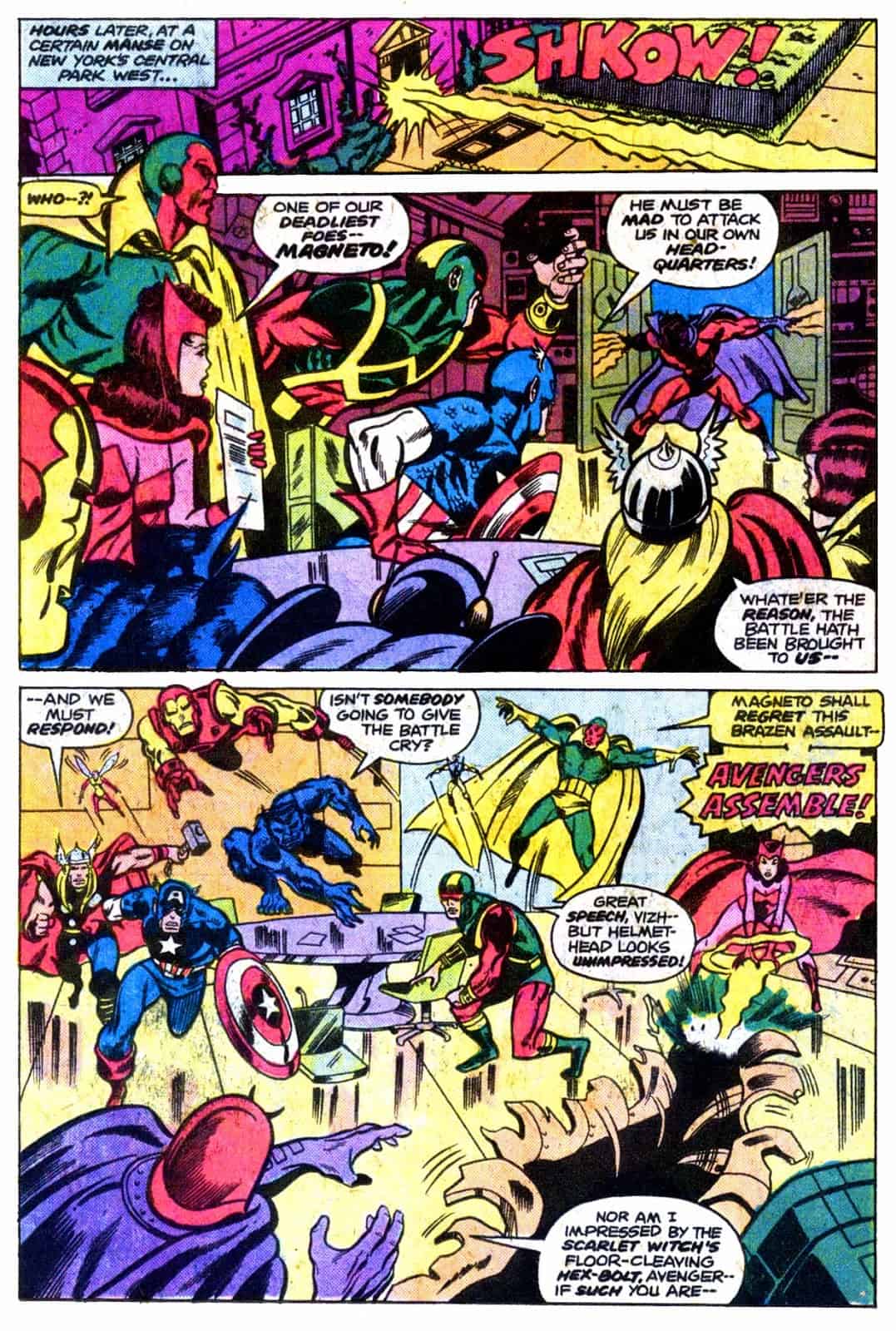 Predictably The Avengers attack Magneto who repels their attack with ease trying to explain the whole time that he’s not there to fight. Finally, The Avengers stop and listen to Magneto but it is too late, Doom comes on a hologram and takes control of the entire team. The Avengers kneel before the Hologram and ask what they can do to please their master, Doom says he can make them do anything he wants but he will let Magneto have one Avenger at his side to challenge Doom, his old enemy Beast of the X-Men.

The pair escapes in a Quinjet and flies around the country looking for help, but the Baxter building and X-mansion are empty. They fly to California, where Hank knows one last team they can call on, The Champions!

Find out what happens next in Champions #16! 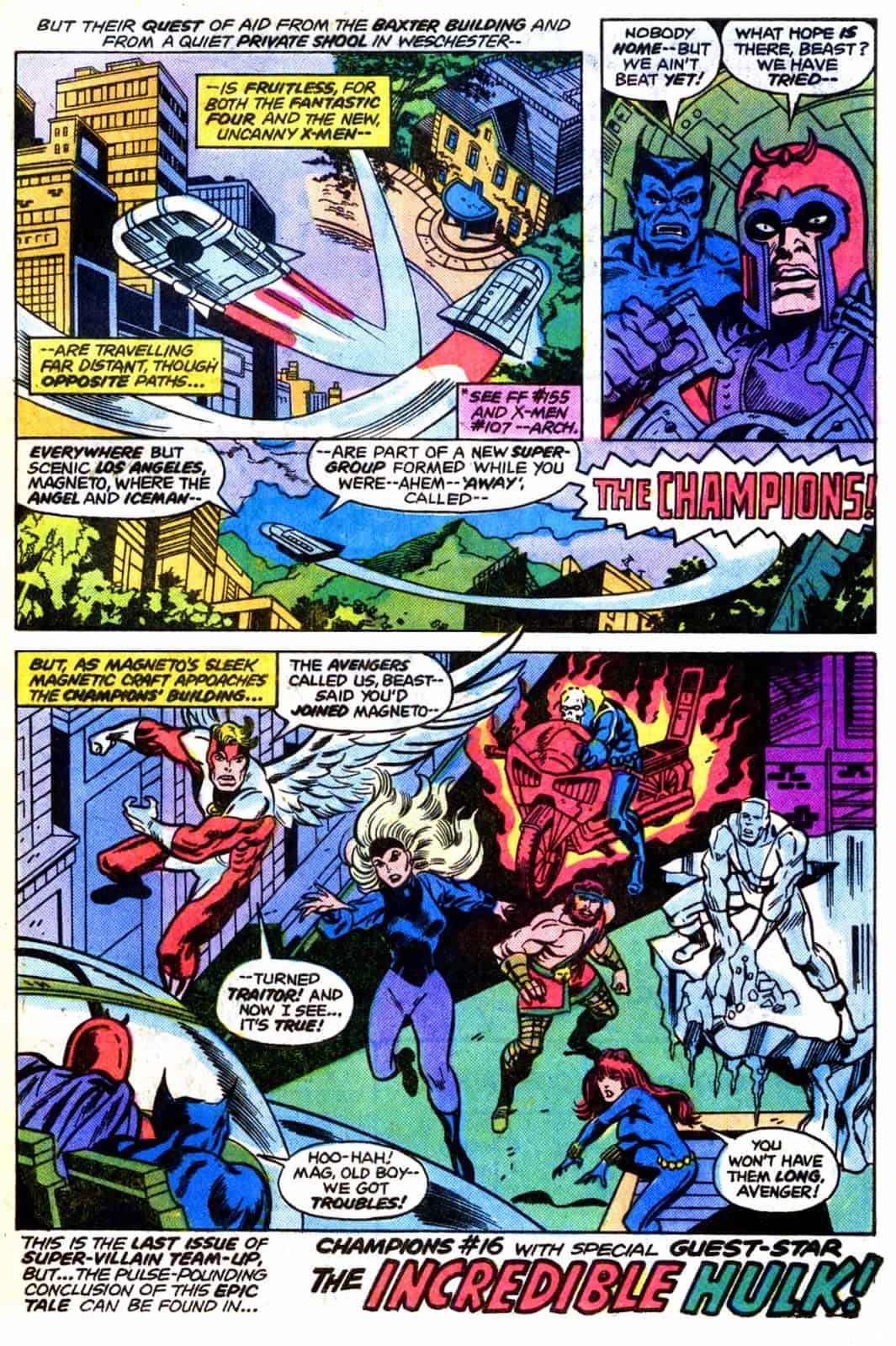 Great entry in a great series, this was the era in which Marvel really started to find its way and it’s voice, the plot moves quickly and features many great Marvel heroes and villains of the era. I like seeing Doom and Magneto at odds as by definition their goals are conflicting. Although if Doom has a global mind-control device why isn’t he in control of the entire Marvel Universe at this point? Guess I might actually have to read Champions 16 and find out haha. I liked the breakdown of Magneto’s transition from a child and back, much less convoluted then reading the five or six issues required to gain the same knowledge as four panels of expositional dialogue. 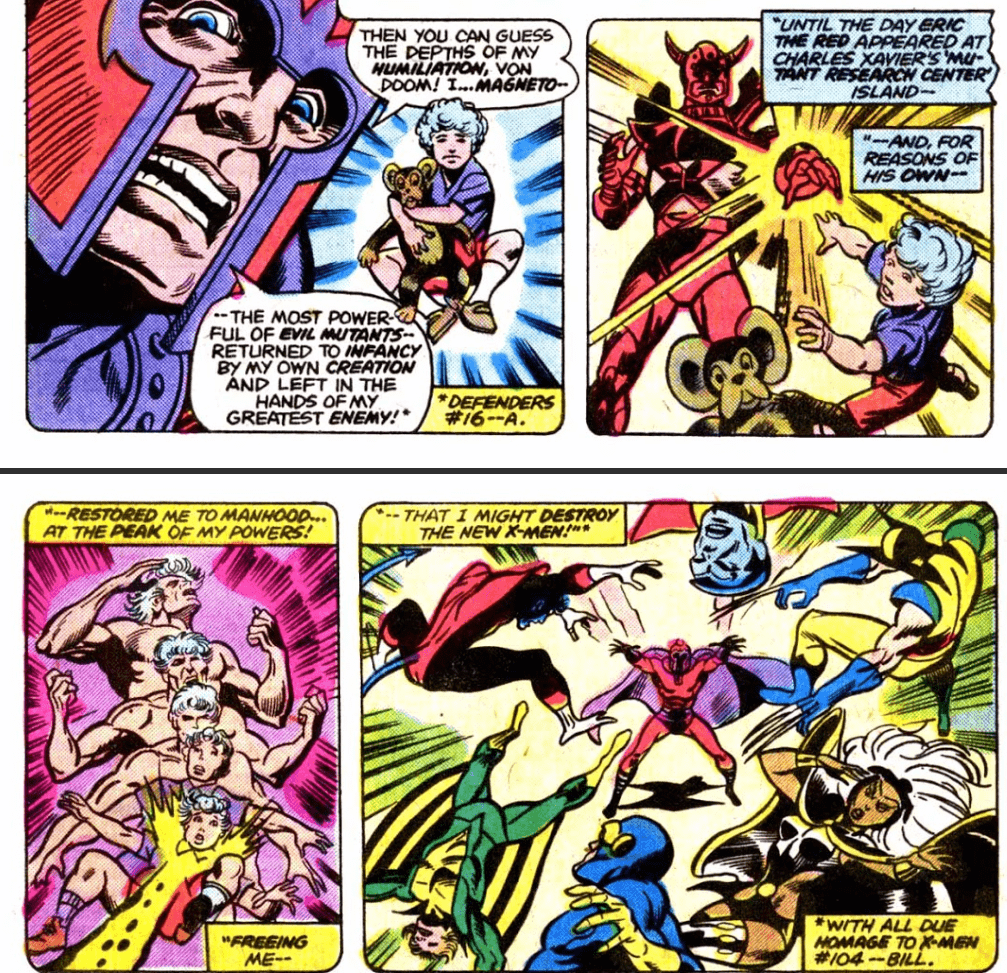 The art by Bob Hall is very well done particularly the scene where Magneto throws the statue into the crowd. I like the expressions in the many facial close-ups of Magneto in his helmet which a lot of artists don’t bother to emphasize as such making it difficult to convey emotion for the master of magnetism for some artists, same goes for Doctor Doom, neither is a character that is necessarily easy to nail down for an artist, which is done here excellently.

Final Thought: pretty solid issue with a lot of cameos but it felt like it had a pretty minimal bearing on Canon and as such the plot gets knocked a little on the rating I definitely consider this series a great one and worth the read but if you skip it you won’t be lost reading other series.