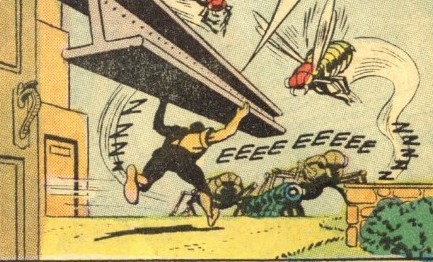 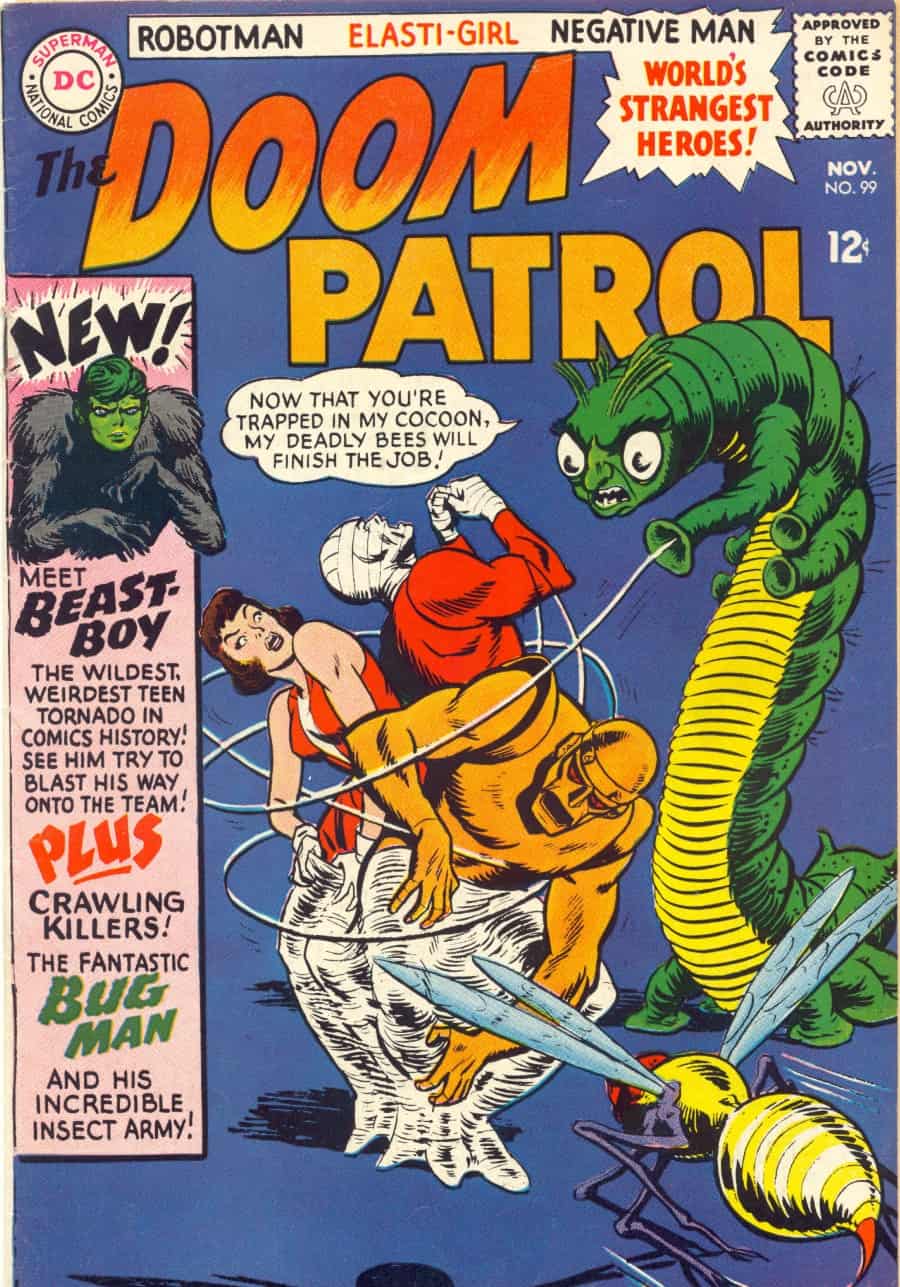 Hello again Watchers! It’s time for another edition of ANCIENT HISTORY! The only comic review series in this town (or any town!) that reviews classic comics based on your suggestions! Have a classic comic (pre-1980) that you love and want me to review? Tell me so in the comments, or private message me (John Jack) on Facebook! If I can find the comic I will read and review it and share YOUR name! Come be a part of the winning team, the comic watch house of ideas!!!! Now looking for freelance writers for a variety of subjects!

The Doom Patrol has long been DC’s strangest superhero team, consisting of RobotMan, Larry Trainor the Negative Man, Elastigirl, and The Chief, they tackle some of the DC Universes oddest threats. The added bonus, in this issue we find the first appearance of one of the greatest Titans of any era the bombastic Beast Boy! Although many of you may know Beast Boy as a member of Young Justice and the Teen Titans he wasn’t always that way in this issue we find Garfield Logan lost, looking for companionship, answers to where he comes from and the nature of his gifts. 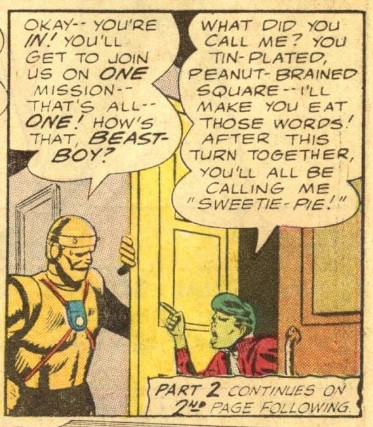 A terrible nickname is born!

We open the issue to find our heroes giving a public performance in a stadium for an adoring crowd. Robotman dives off a gigantic sized Elastigirl’s palm to a death-defying drop, as he falls Larry releases the Negative man, who flies down to catch him, as the Negative Man swoops down something begins to interfere with him, Robotman plummets towards the crowd as Larry realizes there is a strange radio wave that makes him unable to control his Negative persona. He regains control just in time to catch Robotman before he falls and is destroyed, the crowd is delighted and thinks it’s part of the show. They cheer on Negative Man much to Robotman’s displeasure. 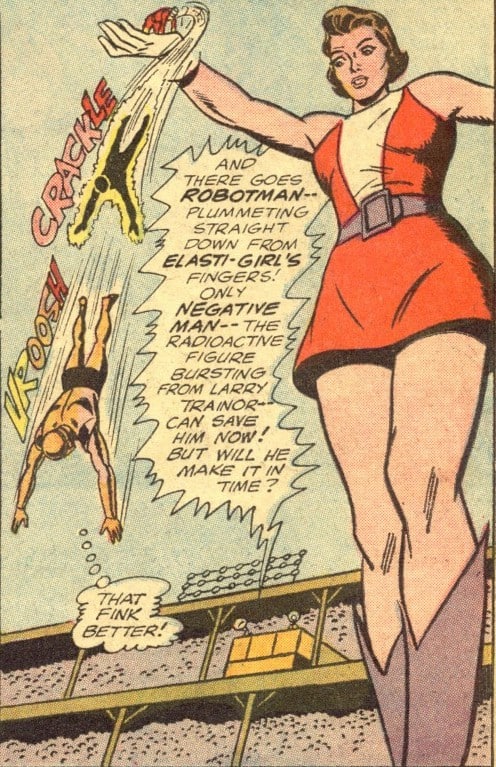 Robotman confronts Larry behind the scenes, he thinks he did it on purpose in order to showboat and physically assaults the hero, Larry says he should be mad at the showboating Negative Man, who hogs all of Larry’s glory. 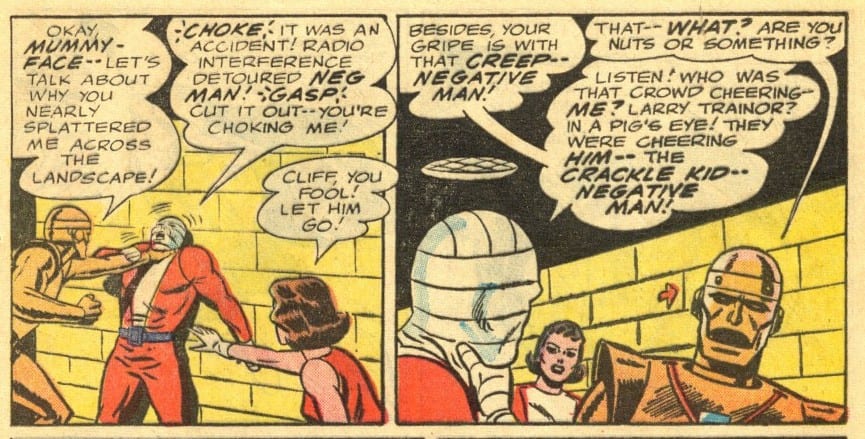 Suddenly the team is attacked by a giant metal dragonfly piloted by a man riding it like a manned torpedo. Robotman tries to attack the torpedo dragonfly but whatever it is made of is stronger than his iron skin and his hands are broken. 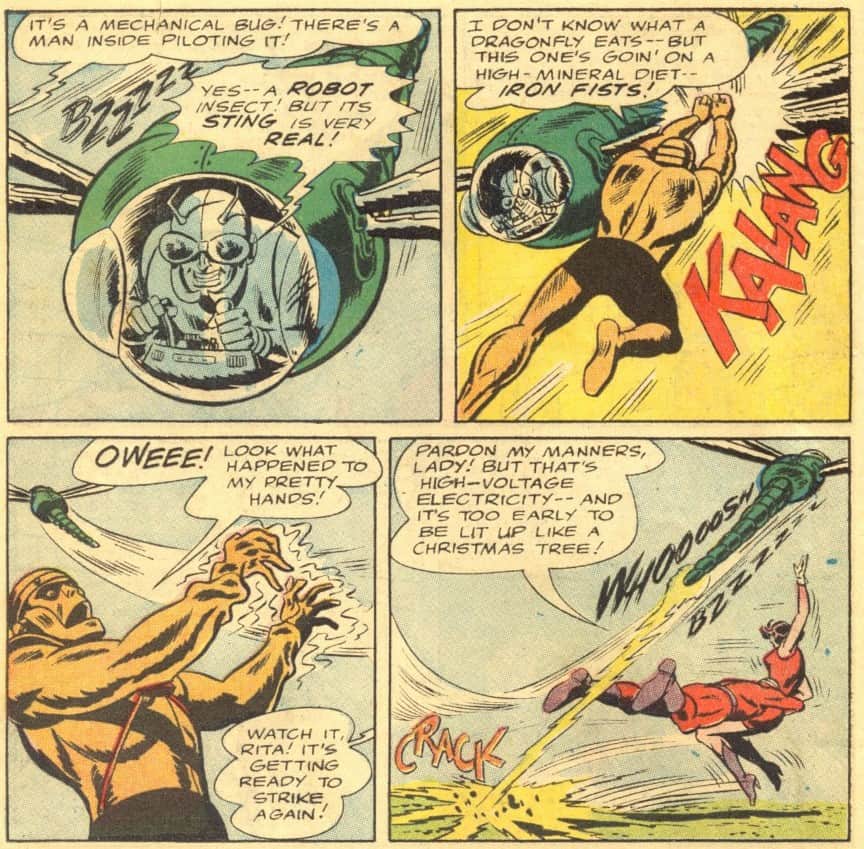 Larry is unwilling to unleash the Negative Man and tries to attack it with no powers, he is quickly incapacitated. Elastigirl grows to humongous size and rips the wings off the dragonfly thinking the fall will destroy it. Suddenly it sprouts legs and turns into a spider and sprays the team with a metal web, Larry is still unwilling to unleash Negative Man, Elastigirl grows again and breaks the web as Bug Man turns into a bee and flies away. 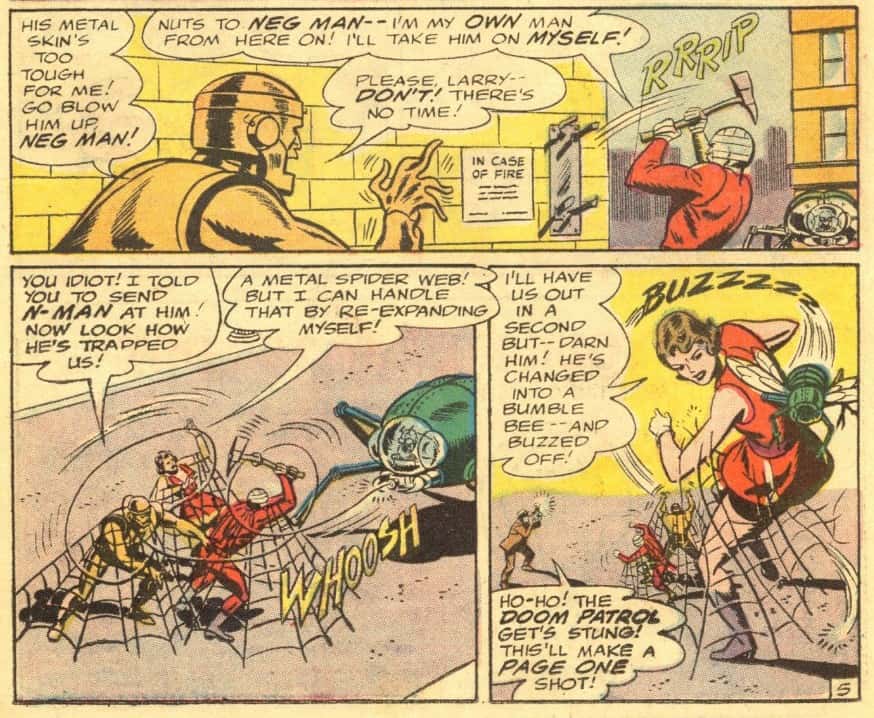 We return to Doom Patrol HQ, The Chief is laughing over a news photo of the team being defeated. As he patches up Robotman’s hands he says the team must have been Bug Man’s targets, since he didn’t try to steal anything with his robot bugs. 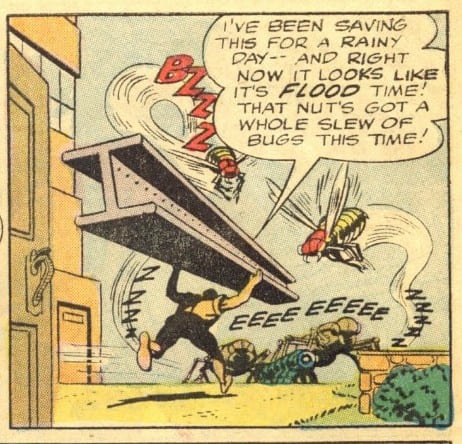 Best panel in the whole book

Suddenly an alarm goes off, Bug Man is attacking the Doom Patrol Mansion with an army of mechanical bugs! Robotman runs out with a huge steel I-beam and destroys one of the bugs. Elastigirl grows huge and fights a giant ant,  suddenly Bug Man sprays her with sleeping gas and kidnaps her. 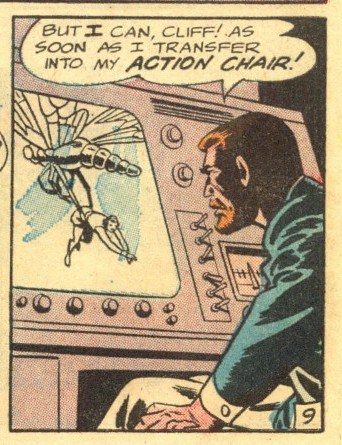 The Chief finds the source of the Bug Man’s signal and rushes off in his action chair (lamest name ever) to save Elastigirl, the Bug Man is planning for just such an attack, his giant ant hill is heavily booby-trapped, which will surely be too much for the Doom Patrol to handle. Bug Man tells Elastigirl to get in a box, which she does without argument for some reason, he tells her the Box will shrink more rapidly than she is able to shrink and she will be crushed. The Chief, having made it through the traps, bursts into Bug Mans lair and commands him to release Elastigirl, Bug Man shoots sleeping gas at him but the action chair is too tough to die! 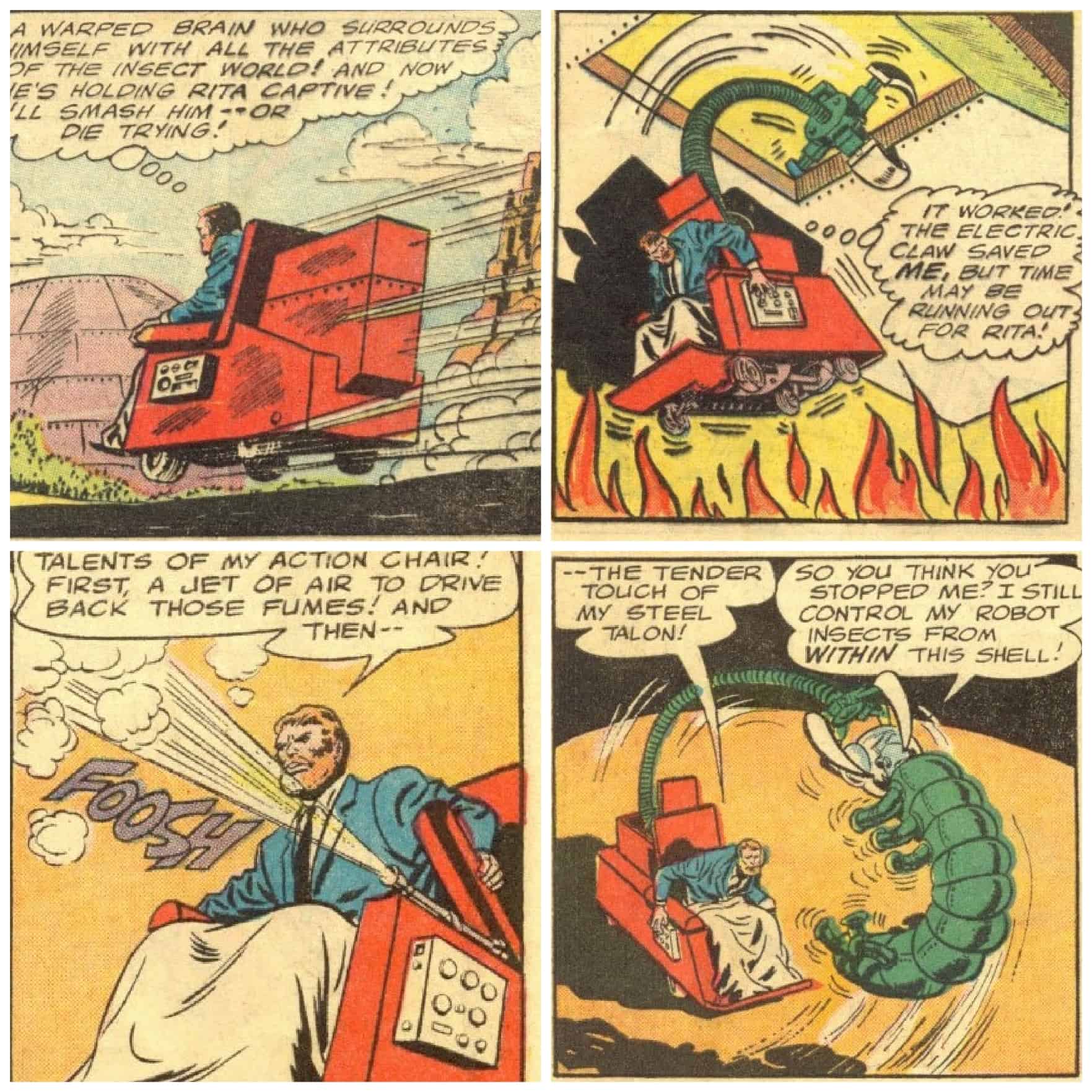 Meanwhile, Elastigirl is shrinking in the Box and notices a safety pin on the ground by her feet, she grabs the pin and thinks that it may be her salvation. Bug Man overcomes the Chief and begins to pull Elastigirl out of the box to crush her with his bare hands, as he opens it she stabs him with the pin and takes the opportunity to grab him. The team destroys the ant hill with the help of Negative Man, finally released by Larry. 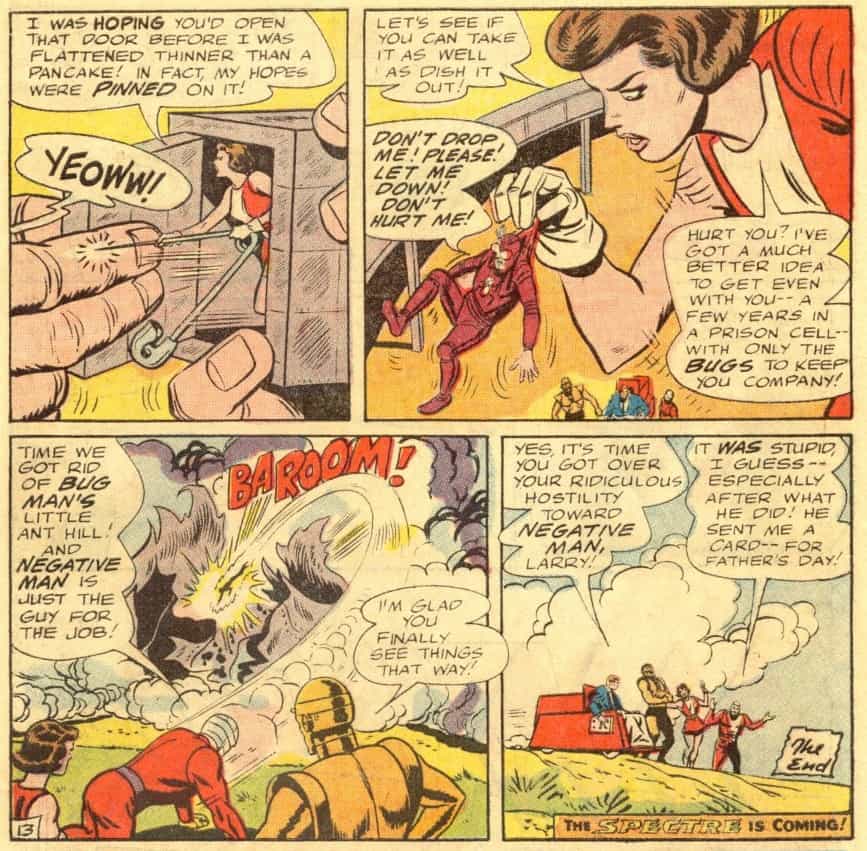 May as well call this one a two-fer as we get a perfectly good story with Bug Man and bonus story that introduces a hero that many may be familiar with, the incredible Beast Boy!

The story begins with the Doom Patrol investigating a break-in at their headquarters, on the scene they find lion prints, feathers, gorilla hair and pieces of elephant tusk, Robotman draws a picture and says they must be looking for some kind of giant hybrid monster. 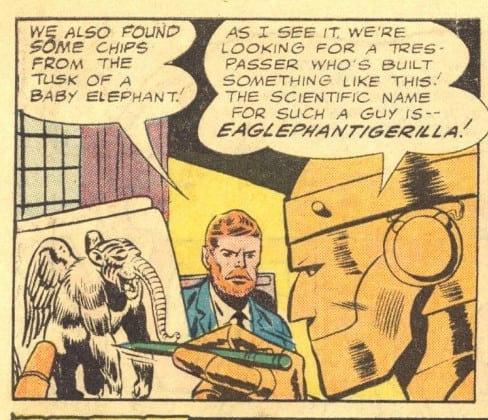 Suddenly the team spots a figure in the shadows and springs to action, trapping the culprit in seconds. The Beast Boy escapes the trap and begins to fight and confound the team changing into several animals to counter each member, in turn, the team piles on him and catches him. 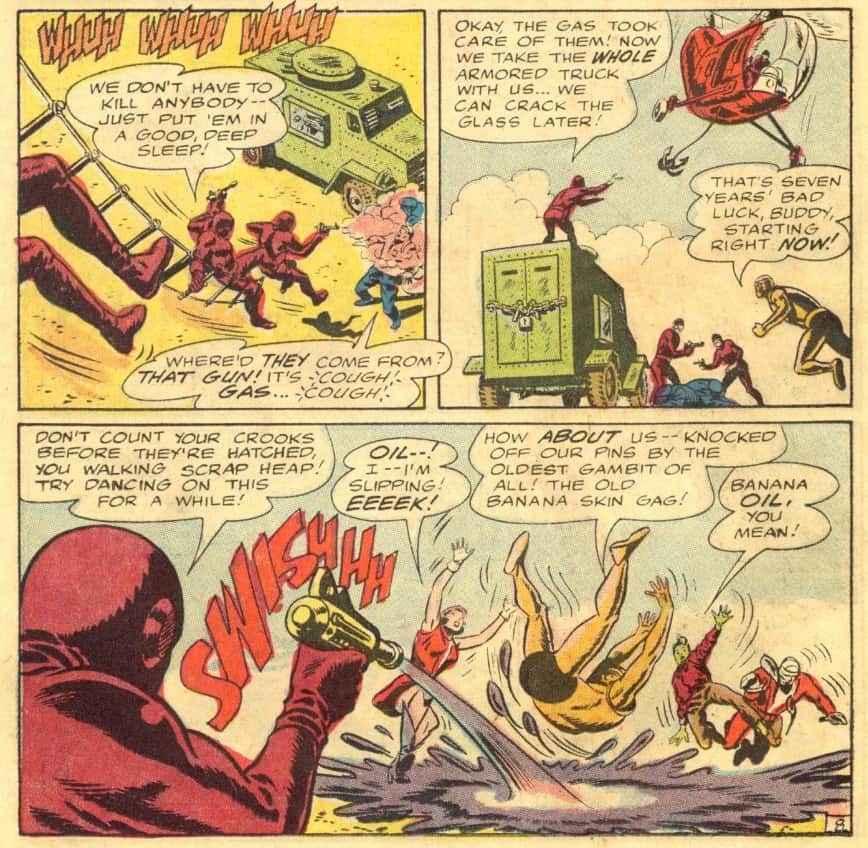 The Chief asks Gar why he broke into their house and he says he just did it to prove he could. The Chief won’t take that obvious excuse and figures out he’s trying to join. The team act like jerks and won’t let him, Elastigirl scolds them all for being mean to someone for being different, they feel bad and decide to let him tag along for a mission.

The Doom Patrol picks Gar up from school and says there’s a parade they want to go to, meanwhile the parade jewelry transport (is that a thing?) is being robbed. The team rolls up just in time to fall flat on their faces, Gar subdues the thieves by turning into many different animals, and the day is saved. HOORAY!

This was a great book, I admit I have never read a doom patrol issue before Grant Morrison’s legendary run and had no idea it was even running back in the 60’s, let alone that beast boy dates back to 1969! I thought the Bug Man story was pretty solid and it was nice to see the team bicker a little, in this era you either got the Avengers calling each other out for whatever bull (this was during the Cap/ Hawkeye/ black widow/ Scarlet Witch/ Quicksilver era, where everyone was trying to be head-Avenger) or the Justice League grinning eerily at the reader while being best buddies. The Doom Patrol felt like a real team, with strong and weak moments throughout. I will definitely read this series again sometime. My one minor nitpick is when Elastigirl gets in the box with literally zero arguments, seemed odd.

I thought the art was pretty great, especially the mechanical bugs, although the beast boy transformations were really weird looking, and the animals were kind of hard to place sometimes, as they didn’t look quite right, especially when Gar changes into a dog that looks nothing like a dog.

Plot is great, art is good, altogether a pretty excellent book, well worth a read, I had to dock a couple points for the art in the B-story, and a little more for the nitpicks here and there (parade jewelry truck? Really?!) but overall I recommend the book, and plan on reading more of this series sometime.