Hello again Watchers! It’s time for another edition of ANCIENT HISTORY! The only comic review series in this town (or any town!) that reviews classic comics based on your suggestions! Have a classic comic (pre-1980) that you love and want me to review? Tell me so in the comments, or private message me (John Jack) on Facebook! If I can find the comic I will read and review it and share YOUR name! Come be a part of the winning team, the Comic Watch house of ideas!! Now looking for freelance writers for a variety of subjects! 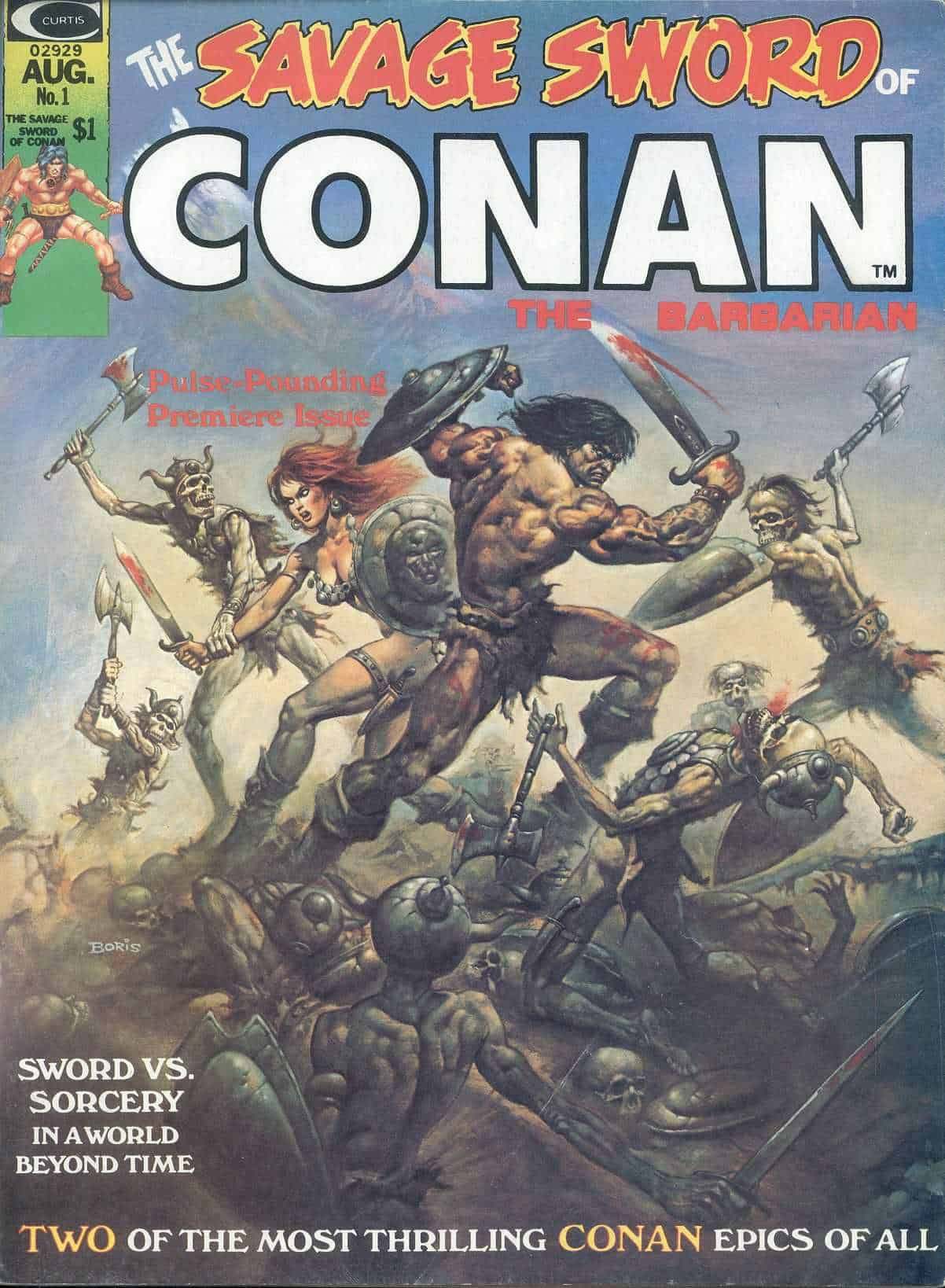 Conan the Barbarian, the Cimmerian Warlord of Hyperborea, has been in publication off and on since the first Robert e Howard short story in 1933. Conan has been a king, a thief, a slave and a mercenary. This comic series was a large part of the inspiration for the movie we all know and love. 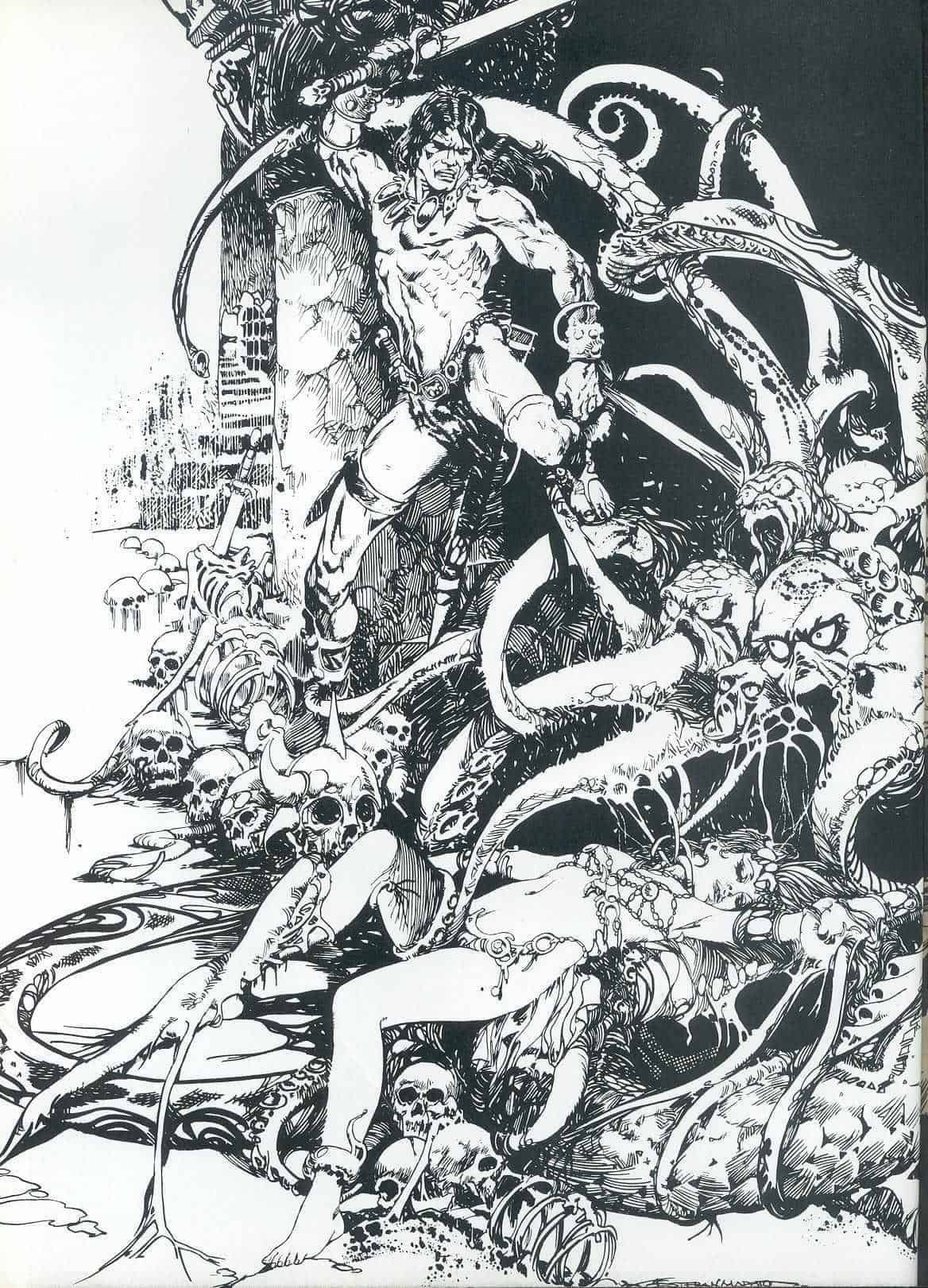 “Know, O prince! Between the years when the oceans drank Atlantis, in the gleaming cities, and the years of the rise of the sons of Aryas there was an age undreamed of, when shining kingdoms spread across the world like blue mantles beneath the stars- Nemedia, Ophir, Brythunia, Hyperborea, Zamora, with its dark-haired women and towers of spider-haunted mystery! Zingara, with its chivalry! Koth, that bordered on the pastoral lands of Shem! Stygia with its shadow guarded tombs! Hyrkania whose riders wore steel, silk, and gold! But the proudest kingdom of all was Aquilonia, reigning supreme in the dreaming west!”

THE CURSE OF THE UNDEAD-MAN

We open in a ghastly market, The Maul, where a man can be killed or a woman can be bought if only the coin is available, a lone Barbarian walks through the darkened square. He brushes through the crowd, intimidating men and attracting women. A trio of exotic courtesans catches his eye, but he has places to be. Suddenly the Cimmerian hears a scream, as he turns he is overrun by a group of priests fleeing from an unknown assailant, or assailants… 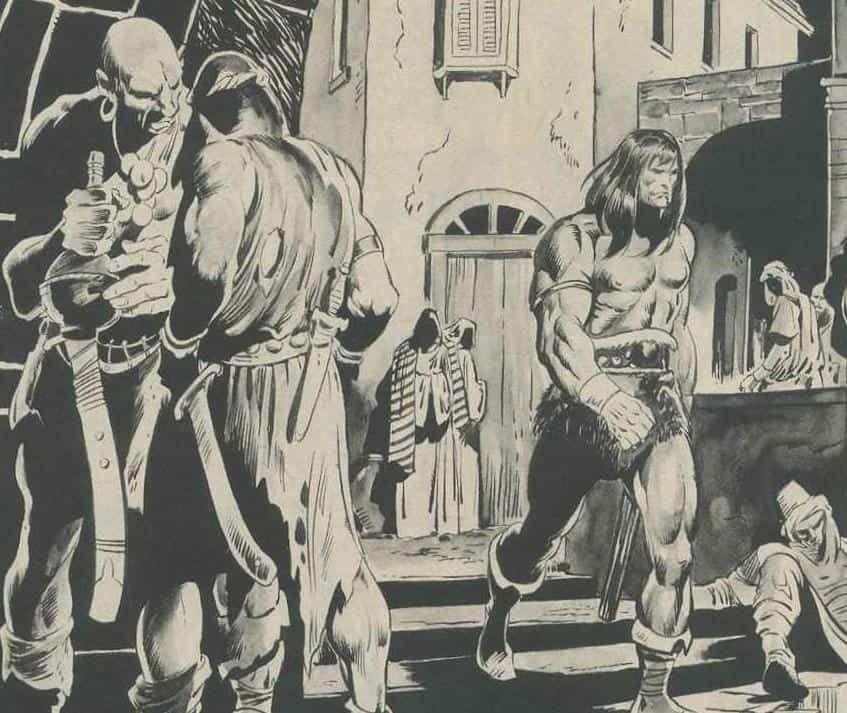 As he regains his footing he is again knocked over by the group the priests were running from. By Crom, enough is enough! He slams the first one to the ground as the rest circle around him, if it’s a fight they want, a fight they’ll get. He kills the first couple but then he stumbles, luckily he is saved just in time but by who?

Red Sonja stand behind the vanquished man, she asks of Conan is going to thank her or what? Conan says he would have been fine for a moment he just tripped. She asks what he could have tripped over in a wide-open street, he looks around the spot he fell and finds a mummified finger covered in jewelry. They travel back in the direction the two groups were coming from and find two bodies on the ground. 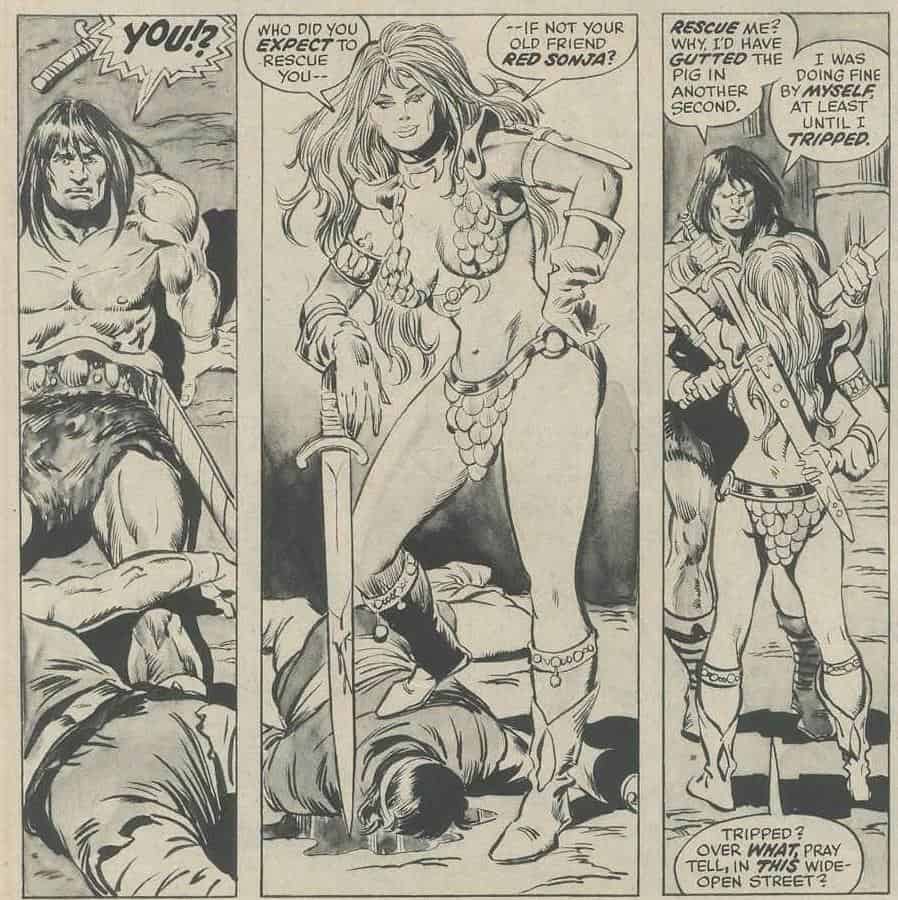 One is no one, a beggar off the street perhaps, but headless out in a circle is Costranno the Argossian Sorceror! Conan asks how Red Sonja knows who it is and she explains that as she was traveling she came across an execution. Castranno had his head on the block, and as he lay there he cast a curse upon Berthilda! For she had discovered the source of his power, his ring finger, and lopped it off while he slept! For that, she would receive the curse of the undead-man on her head! Before he had the chance to finish the curse, the headsman chopped his head clean off!

So it was that the priest was trying to resurrect their master, but was driven off before they got the chance. Conan expresses derision at such Magic and he and Sonja head off to find a drink. Throwing the finger off the ground as they walk away. Unbeknownst to them, the finger rolls back to its master’s body of its own accord.

As Sonja and Conan sit and drink, a woman comes out and starts insulting Conan. Sonja doesn’t like this and lays the woman out on the floor. As the commotion dies down a man in a hooded robe approaches the bar, he is looking for the house of Berthilda, he thanks the bartender and leaves. As he walks out Conan glimpses his hand beneath his robe, on his finger is a jeweled ring! Costranno is on the hunt again! 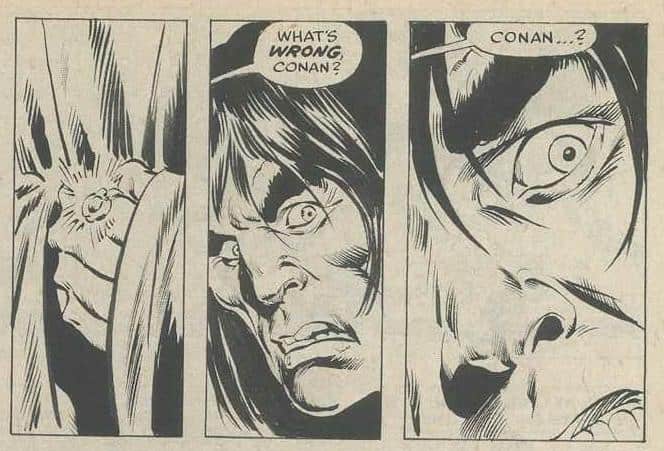 Suddenly the woman returns with a cadre of guards! Sonja and Conan fight the group to a standstill and make a run for it before reinforcements can come. Sonja asks where they are going, Conan explains about the ring he saw and they’re going to the house of Berthilda. After all, he dropped the ring, a Cimmerian always cleans up his messes! 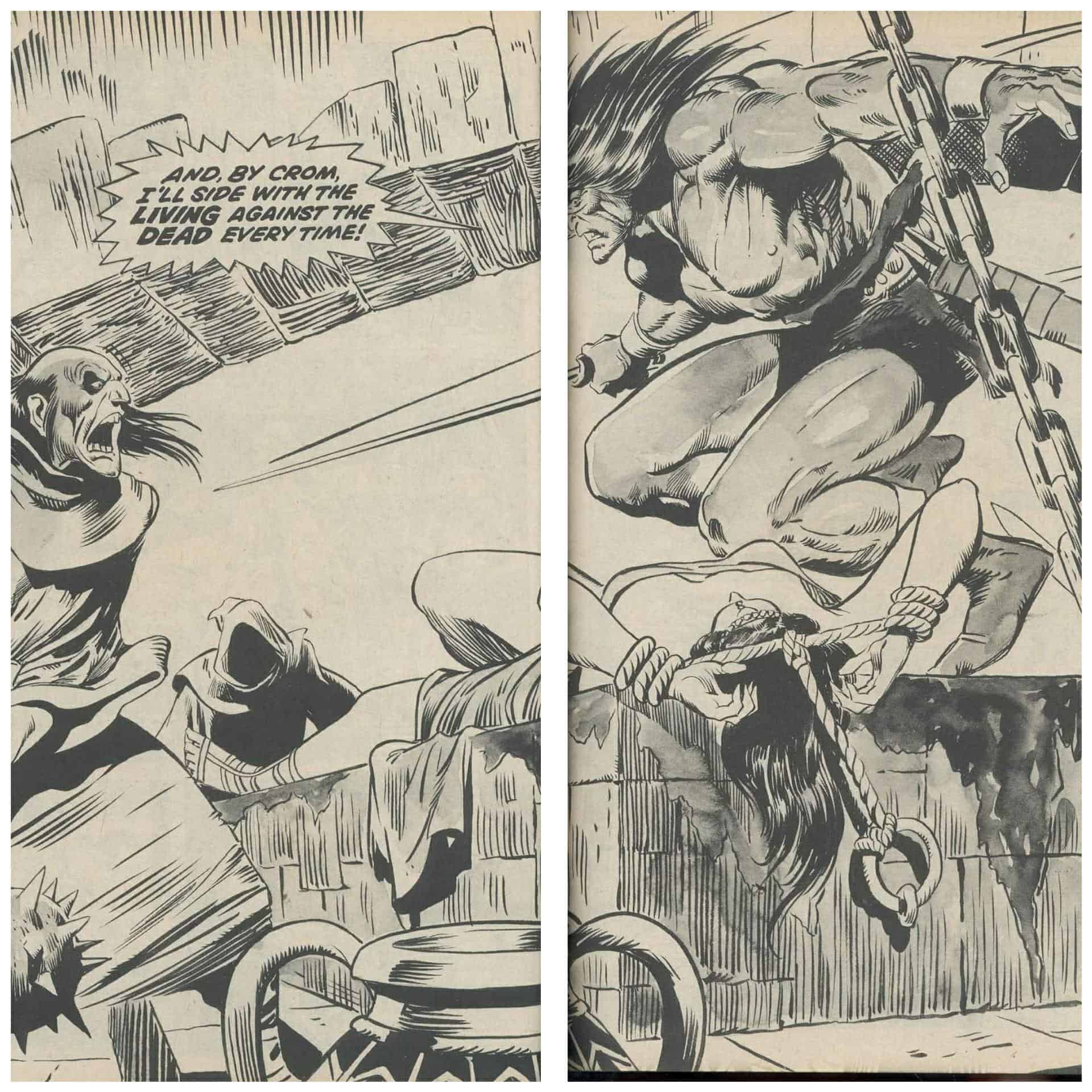 Scanner cut off the middle of the two-page spread, best I could get sorry

Read the end for yourself! Only you can draw the conclusions you must!

“When the plundering hordes of Yezdigerd, scourge of Hyrkania, hammered at the doors of thrice-doomed Makkalet… She was there!

When Khengor, conqueror of the East, set the night ablaze in Black Khitai and made a pagan temple from the skulls of his fallen foes… She was there!

When the black spectre of world-devouring Turan looms dark above the Hyborian world? Aye, perhaps she’ll be there then as well!”

-The Song of Red Sonja 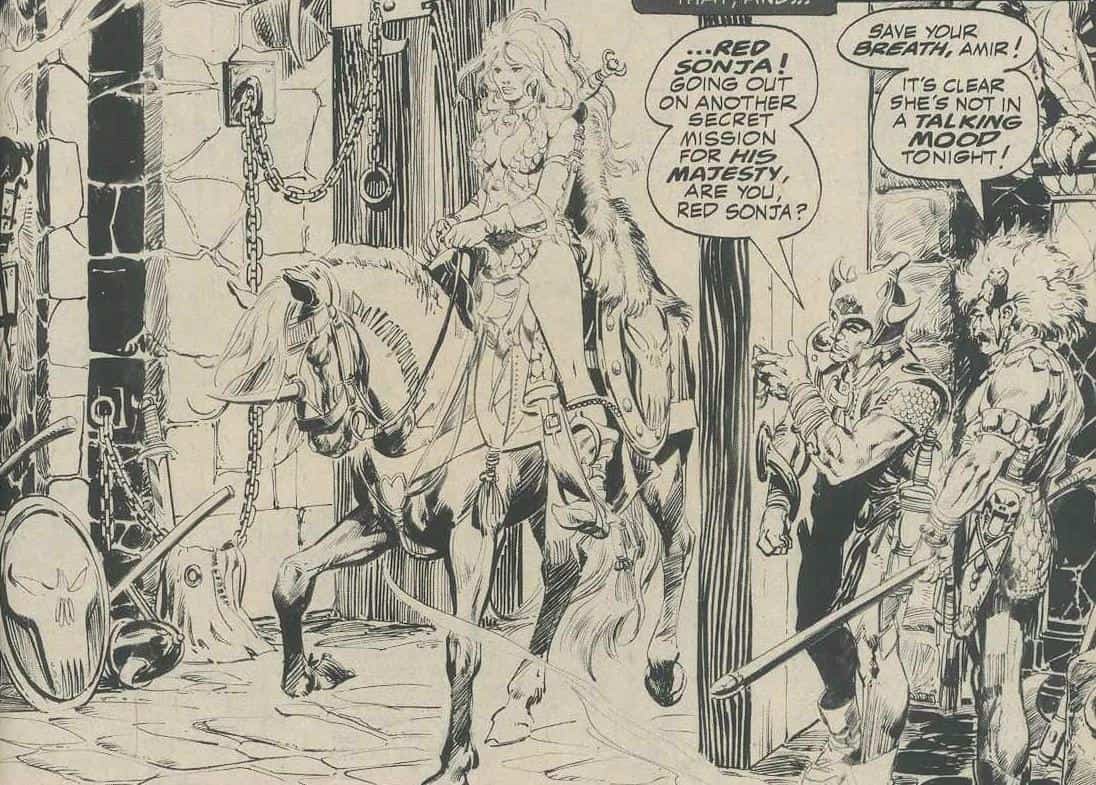 Red Sonja canters out of a Hyrkanean town, as she rides she thinks back to a deal made, a deal to regain a serpent tiara “accidentally” given away in a dowry, should Sonja regain it the man will give her a gift beyond measure! She thinks now to how she retrieved the tiara with the help of a familiar Cimmerian! But what kind of gift might such a Lord give? Little the likes of Sonja might want!

To find out whether the gift was worthy of the effort, read the story for yourself!

Yet, what stark reality may lie behind the glittering legends, the chanted war hymns and eddas of a Savage people?

Could it be, perhaps, the Gods themselves?

A snowy battlefield, dozens of dead strewn about, the clamor of steel has ended, the blood is beginning to chill on the ground, frost creeps over the corpses. Still, two warriors stand, slowly circling among the dead, defying the frost giant Ymir still! One is a red-bearded Vanirean, the other, the Cimmerian Barbarian, the menace of a dozen realms, Conan! Conan thrusts, and his final opponent falls to the ground, choking on blood and sinew as he dies! 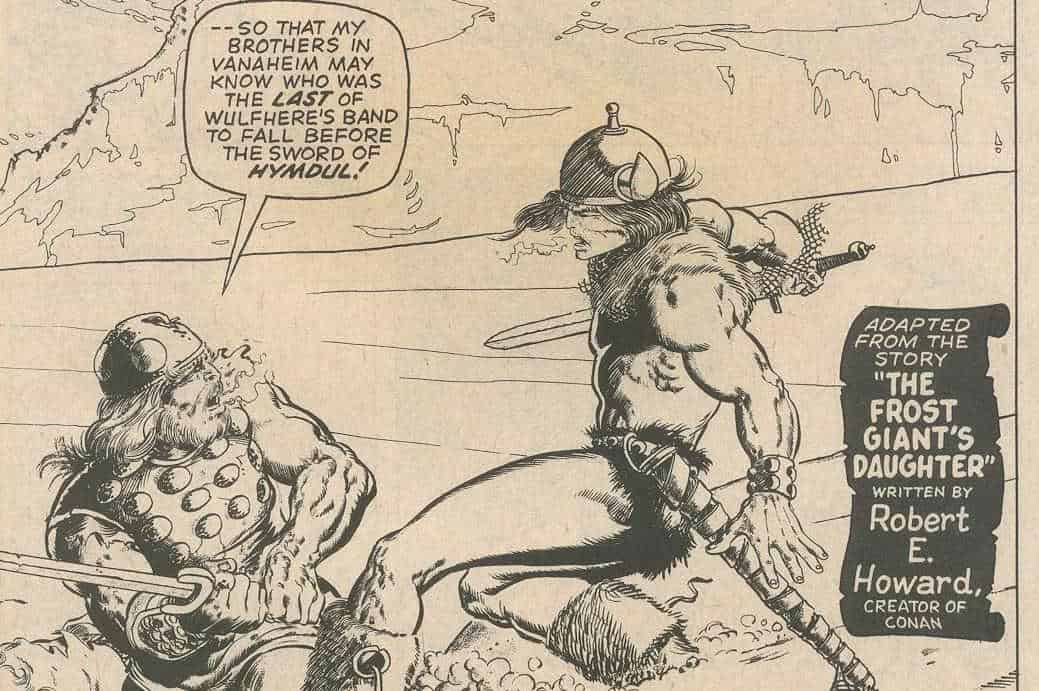 Conan leaves the battlefield, venturing onward, suddenly he hears laughter from out of the snow, a shining beautiful woman is walking through the drifts, clad only in a gossamer veil. 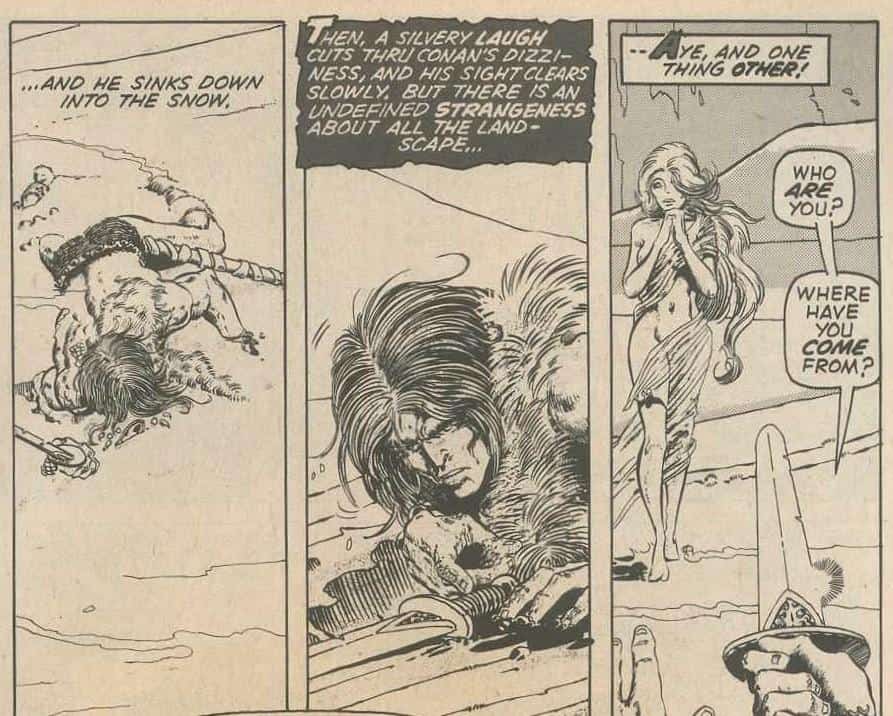 Who is the woman? Where will she lead? Read the book and find out!

First off, there are 3 partially illustrated short stories I didn’t summarize as you could read them just as easily. The stories are phenomenal but this is a comic review, so I just reviewed the comics haha. The final one is based on the original short story by Robert e Howard, and perfectly translates to the comic. I loved the undead-man story and it was awesome to kick the series off with a team-up of sorts. The magical angle was played well and really came into play in the ending. Likewise, Red Sonja had a magical battle as well also including the titular Cimmerian, and the twist at the end of the story was funny and excellent. I can’t recommend this book enough.

The art is amazingly well detailed black and white. An amazing style if done well, shading plays heavily into the mix and is well employed without making the scene too dark or sacrificing detail, John Buscema is a master, as is inker Pablo Marcos.

An incredible story, an amazing book. Ideal for anyone who likes fantasy, swords and sorcery, violence, gore and lots more violence. What a book! I left the endings off the stories, do yourselves a favor and discover them for yourself!