Welcome one and all, it’s time for another dose of that weekly feature that’s the talk of the town, Ancient History! The subject of this weeks dose of decades backdated daring decadence features none other that The Amazing Spider-man!!! 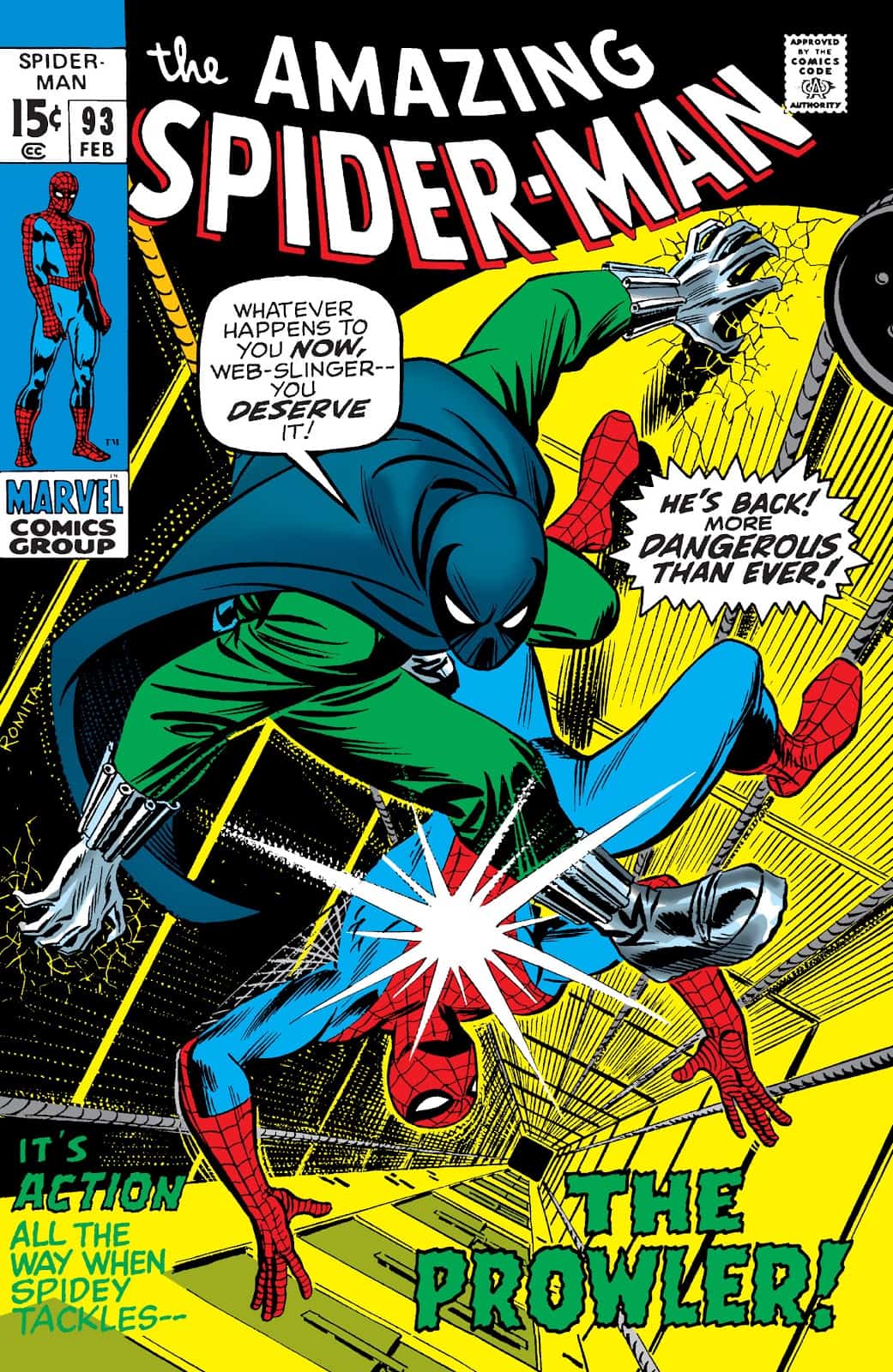 Hello again Watchers! It’s time for another edition of ANCIENT HISTORY! The only comic review series in this town (or any town!) that reviews classic comics based on your suggestions! Have a classic comic (pre-1980) that you love and want me to review? Tell me so in the comments, or private message me (John Jack) on Facebook! If I can find the comic I will read and review it and share YOUR name! Come be a part of the winning team, the Comic Watch house of ideas!! Now looking for freelance writers for a variety of subjects!

Captain George Stacy is dead, and Spider-man is suspected of his murder by the police, the press and worst of all his girlfriend Gwen Stacy! Lately, the wall-crawler has been getting it from all sides in the form of a prospective dirty DA looking to capitalize on the death of the hero police officer, and various heroes looking to bring him in for the perceived safety of the public including Iceman. 2 sides, I guess…

Now a guilt-wracked Peter, not even sure if he is truly responsible for the death of Gwen’s father, can’t even look Gwen in the eye. Despite the fact that he loves her he can never tell her his side of the story without her realizing he’s Spider-Man!

We open on Gwen Stacy crying, as women in the 60’s and 70’s often did in comics, she is lonely and depressed now that her father has died and Peter has withdrawn, suddenly the phone rings, it’s her uncle Arthur from England! He tells her that she doesn’t have to be alone, she should come live with her family in England, she tells him she’ll think about it. A knock comes at the door (how can anyone feel lonely with all these constant intrusions?)it’s Peter, she tells him about the call and asks him what he thinks, he starts to ask her to stay, but guilt gets the better of him and he tells her to do whatever she thinks will make her happy. A crestfallen Gwen, having expected Peter to stand up for her, asks Peter to leave. (She’s kind of a needy pain in the butt sometimes) As he’s walking down the street feeling sorry for himself Peter tries to figure out what to do.

Just when you were starting to think you paid 500$ (CGC graded apparently this issue is worth money haha) for some kind of sappy romance magazine, Peter throws his arms up, yelling he’s Spider-man (no wonder SHIELD had such an easy time finding him when the time came) and taking to the rooftops looking for a fight, which just doesn’t seem like healthy behavior. 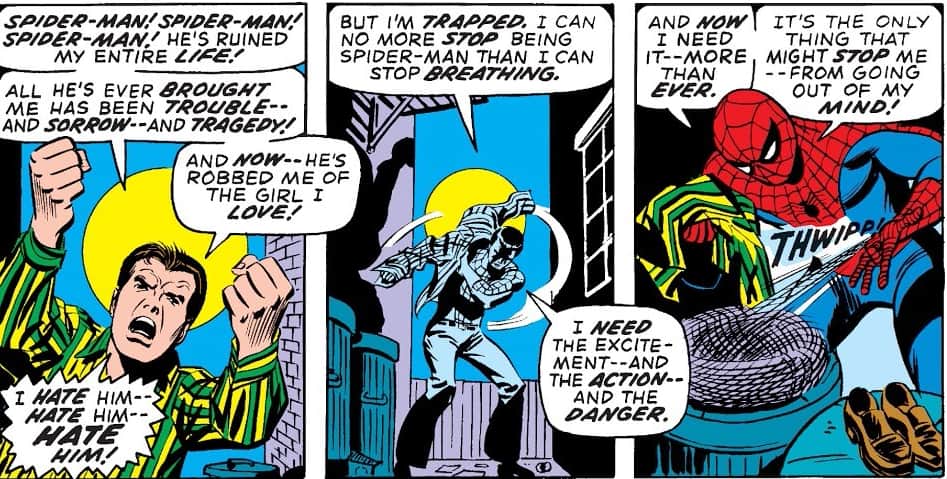 “I am a model of mental health!”

Meanwhile Hobie Brown is having a hangup of his own, he remembers back to when he impersonated Spider-man (in order to preserve Petey’s secret identity in ASM 87, as if ya didn’t already know!) as a favor and saw Captain Stacy and a handful of kids in the room Peter had him go to. He wonders if he was an unwitting accomplice to the murder of the Captain, and decides to set out and clear his head if nothing else. Although Hobie Brown is a nobody, maybe Spidey will talk to The Prowler! 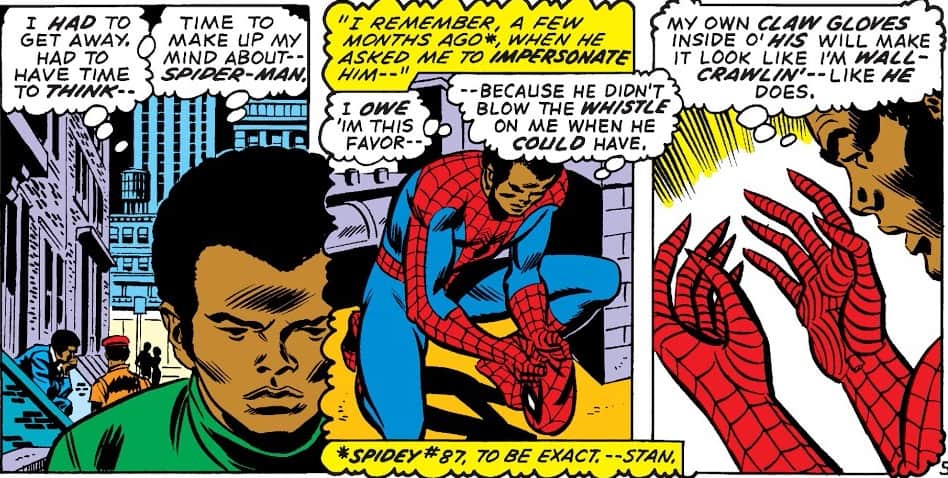 Spider-man is still swinging around, he decides for the good of everything he has to tell Gwen he’s Spider-man and explain what really happened. As he crawls outside her window he peeks inside and she’s crying, he debates with himself one final time, when suddenly a blast fires next to him! The Prowler, Hobie thinks Spider-man has come after Gwen to finish the job and attacks! 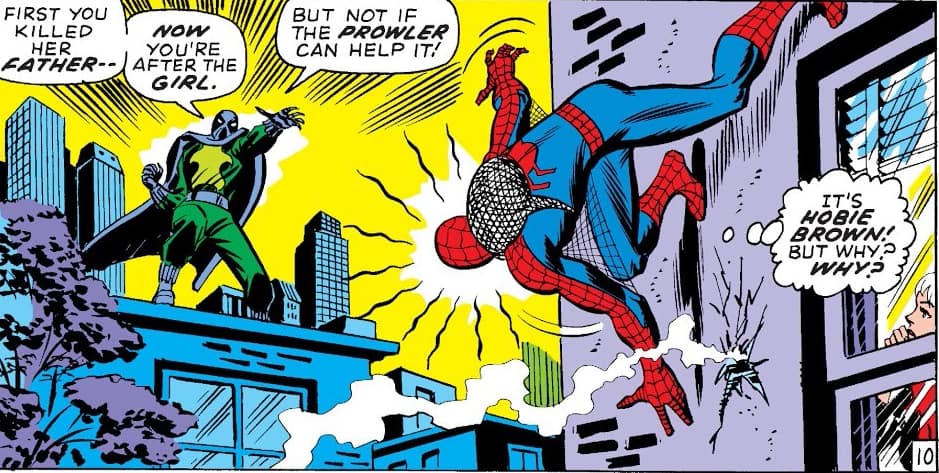 After a lengthy chase Spidey and Prowler stop on a rooftop, Spider-man manages to grab Hobie and implores him to stop and let him explain. He doesn’t want to hear the wallcrawler’s excuses and dives through a skylight with Spidey on his back. Spider-man catches himself easily but Prowler tried to keep fighting and falls to the floor, only just barely managing to slow himself down. Peter rushes Prowler to the hospital and gets him a doctor. 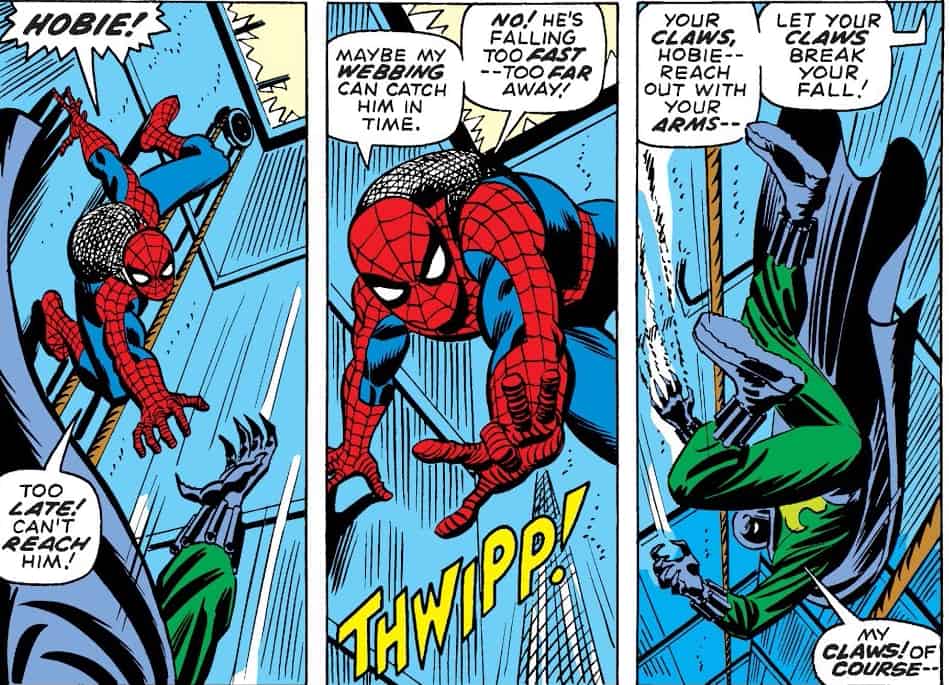 This is basically how Gwen died. Foreshadowing!

Peter heads back to Gwen’s apartment to find someone else unpacking in her place (that landlord is ON IT, finding a new tenant in the middle of the night!) she sees Spider-man and screams, he is a wanted murderer after all, he says he just wants to know where the last tenant went. The terrified woman tells him Gwen went to the airport headed for London, Peter rushes to the airport just in time to see the plane leave, isn’t that always the way?!

Man what an issue! I remembered this one from when I was a kid and decided to start 2018 off right! I’ve always thought the Prowler was cool as a character, almost an antihero before there were a ton of them. His motivation in this issue, in particular, is pretty believable and rock solid, a marked improvement from his first appearance (he wanted to steal some stuff and return it to look like a hero haha) as a kid I had all the essential Spider-man volumes running from issues 1-126 or so, got one a year for my birthday, this issue was one of my favorites.

In terms of canon this issue is completely indispensable and a pretty vital part of The Death of the Stacys Saga (uh… spoilers? Do I have to tag spoilers in a 47-year-old book?) Gwen leaving is a turning point in Peter starting to notice Mary Jane, although I always liked Gwen better myself. On the downside, it does also feature heavily later in the Clone Saga (the first one) which is… Unfortunate, let’s not talk about it anymore.

John Romita Sr. is a legend and Spider-man is where he really cut his teeth as an artist. I love Gwen’s look and the Prowler looks great, really just an amazing issue all around. His action scenes for Spidey are second only to Steve Ditko. Ditko knew how to draw a punch! This run is the run all other issues of Spidey should be compared to.

I can’t recommend this issue enough, I’d call Spider-man 70-150 the golden age of wallcrawling, not that the earlier or later issues are bad, this run is just great. I’m gonna go read like 25 more issues of Spider-man now you guys know where the door is.