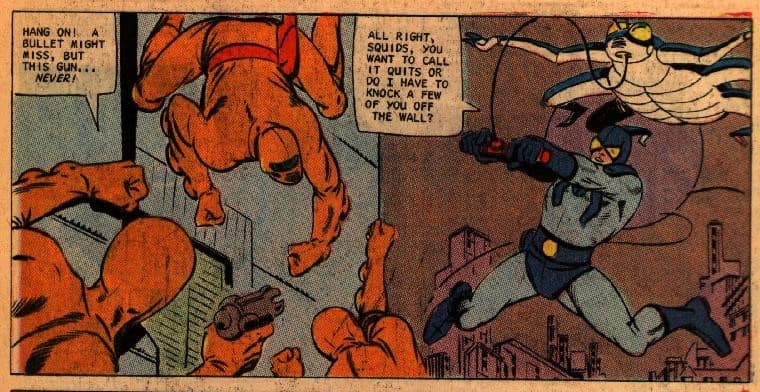 The second Blue Beetle, Ted Kord, is an inventor turned costumed adventurer dedicated to truth, justice and so forth! We all know what that means! It’s time for another edition of Ancient History kids! Buckle up you’re in for a ride! 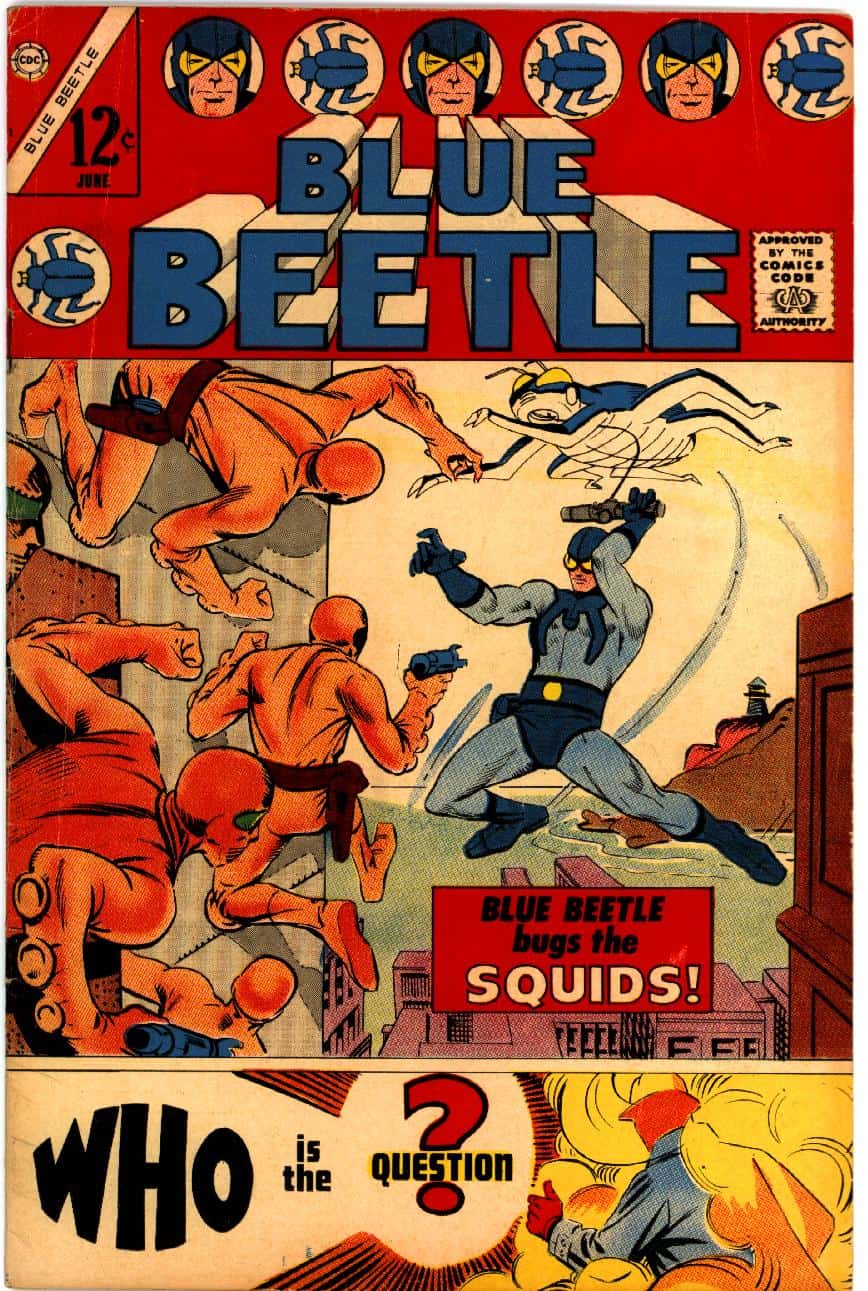 I’ll admit I haven’t read a ton of Blue Beetle and don’t know much beyond what I’ve gathered from his appearances in the 90’s (which are awesome) but I can tell you Ted Kord is an inventor who takes on the greatest threats the swinging sixties had to offer!

We open on the waterfront in Hub city, a crew of scuba suit-wearing men creeps out of the surf, shedding their scuba gear they climb a building using suction cups built into their suits. They crash a swanky party, demanding watches and jewelry! (always seemed like such a hassle for not that sure of a thing) Suddenly a costumed figure swings in through the window from a strange airship.

The Blue Beetle begins to fight the gang of Squidmen, quickly gaining the upper hand and not giving it up. The police arrive and the Squidmen and the Beetle scatter with the Squdmen climbing down the window and Ted hanging from his ship by a special handle. They continue their fight until the Squids hit Blue with a cloud of fog and he is forced to pull away. The Squids dive back into the water and Ted chases them using his ship (which can submerge) but can’t find them. Meanwhile, the Squids call the night a wash, they didn’t gain anything but neither did Blue Beetle, and their next caper is a doozy!

The next day in the lab of Ted Kord being visited by a police officer named Fisher who is asking about a disappearance on nearby Pago island, Kord doesn’t tell him anything and he leaves. After he’s gone Ted’s assistant Tracey tells him he ought to come clean about what happened on the island. (I have literally no idea what they’re talking about but it pertains to the original Blue Beetle and his earlier series I think. I haven’t read that one so I’ll move past it. 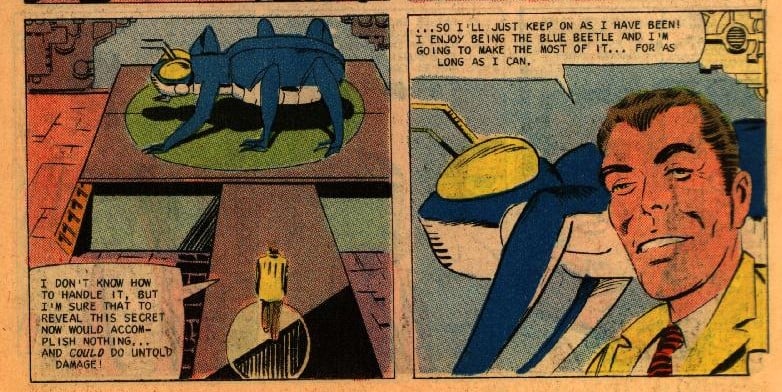 Slightly older Peter Parker? Is that you?!

Ted walks down to his Blue Beetle lair (where do Beetles live? Burrows?) and suits up. Meanwhile, the Squids are eyeing a charity costume party on Tod Van III’s yacht, Tod talks to himself and reveals a secret, he’s head of the Squids! He’s using the theft to hide the fact that he blew his family fortune and he aims to get richer than his father ever was. Beetle spies on the ship with his ship from under the water.

Tod makes an appearance on the ship in costume, then switches out with an underling so he can oversee the heist. The Squids dive under the ship so it looks like they came from shore. They climb aboard and demand the charity coffers, the fake Tod Van III puts up an argument but is rebuked and gives up the cash. The Squids dive off the ship to escape and the Beetle tracks them.

We cut back aboard the ship where Todd (his name hilariously switches to two D’s here) has switched back and is accepting all the comments on his bravery standing up to the thieves. Blue Beetle climbs onto the ship, he’s figured out where the Squids ended up. He rounds the corner and comes across the gang celebrating, with the crew, they’re clearly in cahoots! 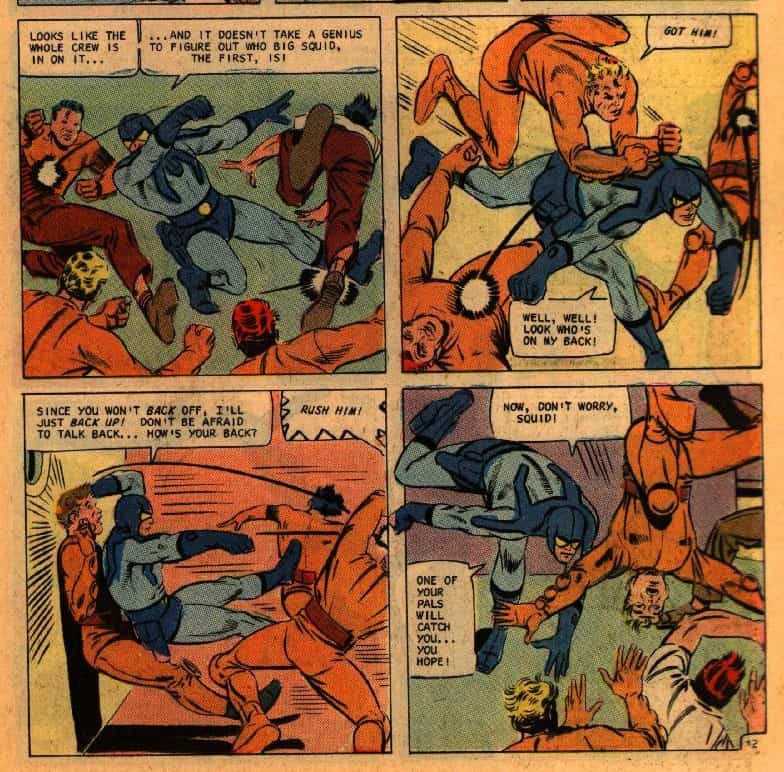 The Beetle fights the gang but starts to lag under the numbers, they pull out guns and he fires his into the air, they think he’s surrendered but in actuality, he’s called the Bug, his ship! He dives his ship into the water and follows the ship little ways underwater before popping up and seizing the yacht with the ships pincers.

The police come after the yacht on ships after seeing the commotion, the Squids run below to try and find a way to escape and find Todd rigging the ship to blow, it’s a double cross! The crew all bails overboard and is quickly captured by the forces of justice, Ted tracks one lone swimmer, the illustrious Todd Van III! He catches up to Todd and they fight it out. Ted wins and drops Todd off with the police. 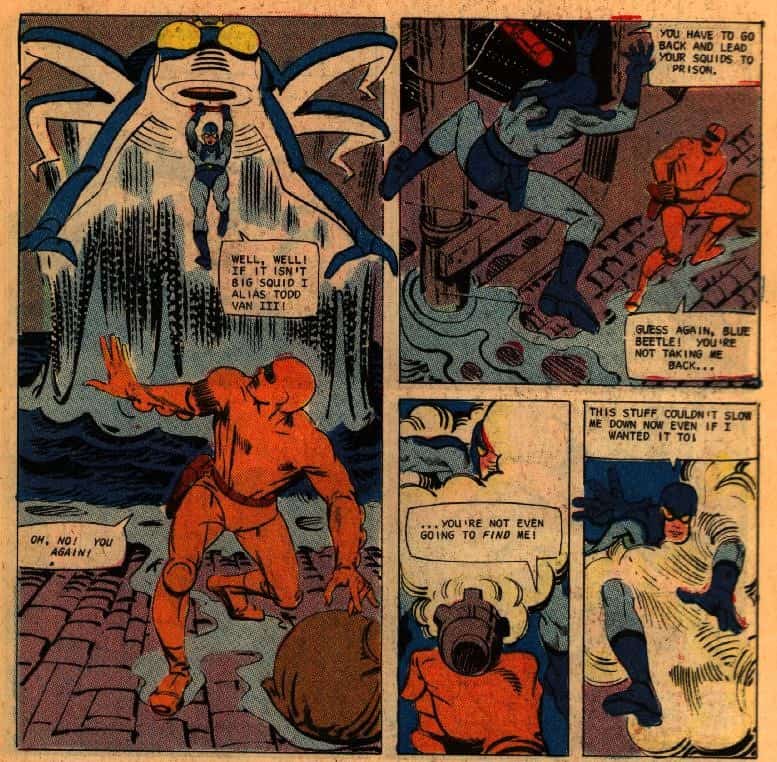 There is a B-side story starring the question! Look for it in a future issue of Ancient History!
What Just Happened?

So that’s where Steve Ditko went after leaving Spider-man! Man, this issue was a ton of fun, I liked the leader of the Squids trying to alter the public’s perception of him, that was funny. As far as comics from the 60’s go this one is written in a more mature manner than a lot of other stuff and does a bit to establish the new Blue Beetle, the second issue does a lot more stage setting than this one, as issue one does little to introduce you to the character.

The action scenes are drawn excellently, Steve Ditko always could draw a punch! I like the character design, which persevered well into the 90’s and his appearances in comics like Birds of Prey as a late end of middle age man prior to his murder by Maxwell Lord. (spoilers?)

I liked this issue a lot, but it did very little to introduce us to the new character if it wasn’t for my having read his 90’s appearances I would know pretty much nothing about the character even after reading a few books in this series.