Angel #1: Helping the Helpless (And also the Ratings) 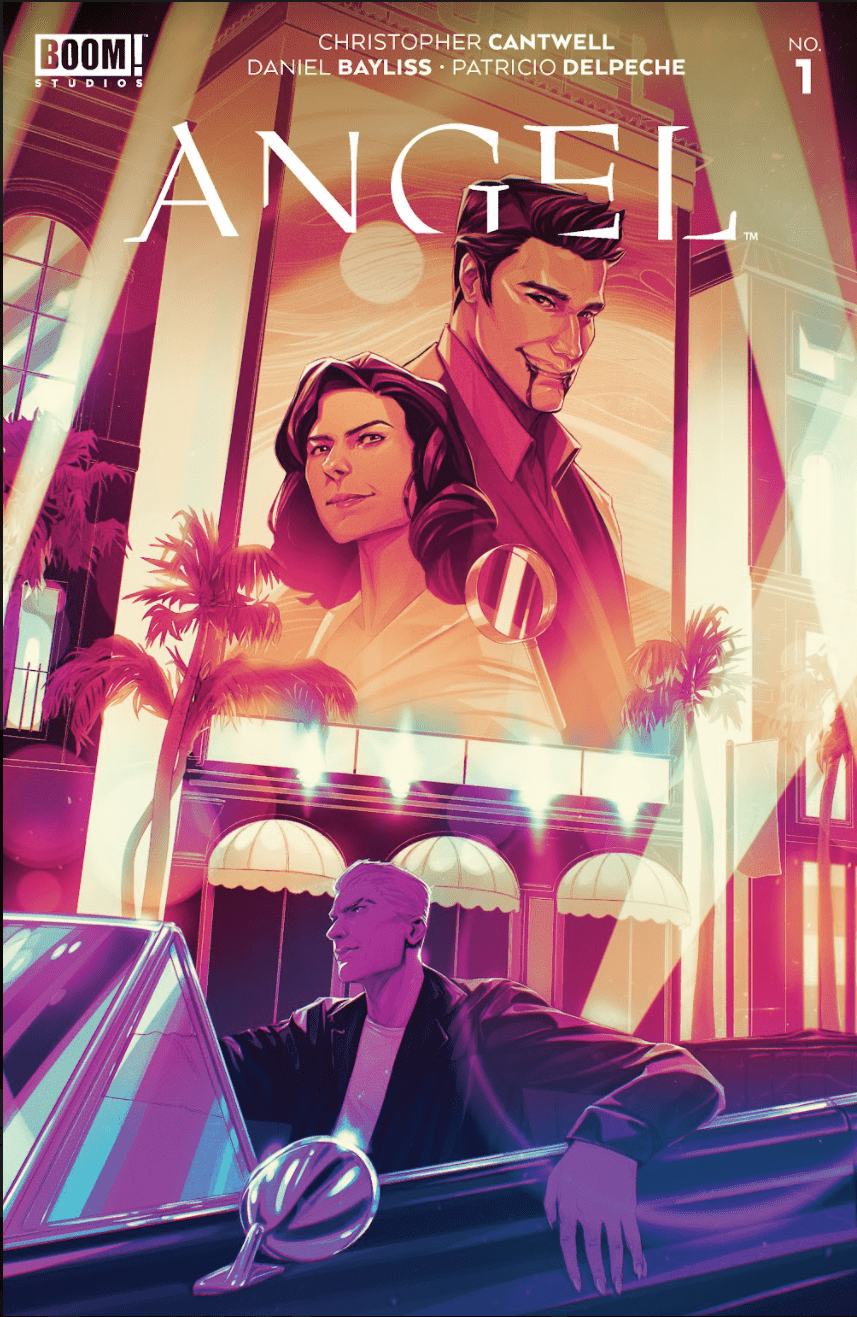 Everything you know about ANGEL and his friends has changed! Welcome to a brave new world, where Angel and Cordelia double as TV stars of a show about their adventures solving undead crime, Fred is a Slayer with Wesley as her Watcher, and everything old is new again! But from across the multiverse, a deadly evil is coming for their world... and Angel may not be champion enough to stop it!

I’ll be the first to admit: I was particularly wary when I heard the announcement of this series. As a die-hard, old-school Buffy and Angel fan, I haven’t been particularly impressed with Boom’s reimaging of some of my favorite series thus far. What could a different reimagining bring to the table?

A lot, as it turns out. Starting with having a writer in Christopher Cantwell who clearly knows and loves these characters, and is adept at channeling their voices. I can hear Angel, Cordy, Fred, Wesley, Spike, Andrew, and Lorne’s voices when I read their dialogue. (Which is bittersweet in the case of the late Andy Hallett, who sadly passed away of cancer in 2009.) That’s the mark of a writer who isn’t just cashing a paycheck, but truly loves the characters he’s writing and their world. (Bonus points for the laugh-out-loud joke about the size of David Boreanez’s forehead.)

What’s more, the world feels like an extension of the show. Sure, the details change, but not in such a way as to feel disingenuous. Having Fred manifest as a Slayer, with Wesley as her Watcher, feels like an especially inspired and logical choice. And the inclusion of Andrew, although only appearing in two season five episodes, feels natural. The show seemed to be gearing up to add Tom Lenk to the regular cast in his appearances, so having that come to pass here shows that Cantwell was paying attention to the details of a show that ended eighteen years ago this May – the mark of a true fan. Again, what a wonderful feeling. The only thing that could endear me more would be if Boom! were to hand Cantwell the storytelling reins to continue the canonical story left in a cliffhanger at the show’s end. (If not, Boom, I’m right here.)

Daniel Bayliss, an artist whose work I am unfamiliar with, does a great job here. His style is cartoony, but the individual characters still look like the actors who played them. Roman Titov’s colors really pop, too, bringing to life the glitz and glamour of Los Angeles in a way that – again – resembles the look and feel of the show. Rising star Becca Carey’s lettering is the icing on the cake.

There are many deft touches to Cantwell’s script that helps give it further life, like Cordy’s TV character being “Detective Kate Lockley” or Spike’s insistence that he’s more a hero than Angel (an ongoing thematic question throughout season five). And that’s what really makes this issue come to life: what could have been a dreary, been-there-done-that exercise in “everything you think you know is different now!” storytelling feels positively exciting because you can feel Christopher Cantwell’s love and enthusiasm for these characters and their world in every panel. If you’ve been frustrated with the lack of Angel comics in the past two decades that feel like authentic extensions of the show, be frustrated no more.

Angel #1 pulls off an incredibly nifty trick in balancing a refreshing new look at fan-favorite characters with characterization that is 100% spot-on. If you're a fan of the show, don't miss out on this!

Angel #1: Helping the Helpless (And also the Ratings)