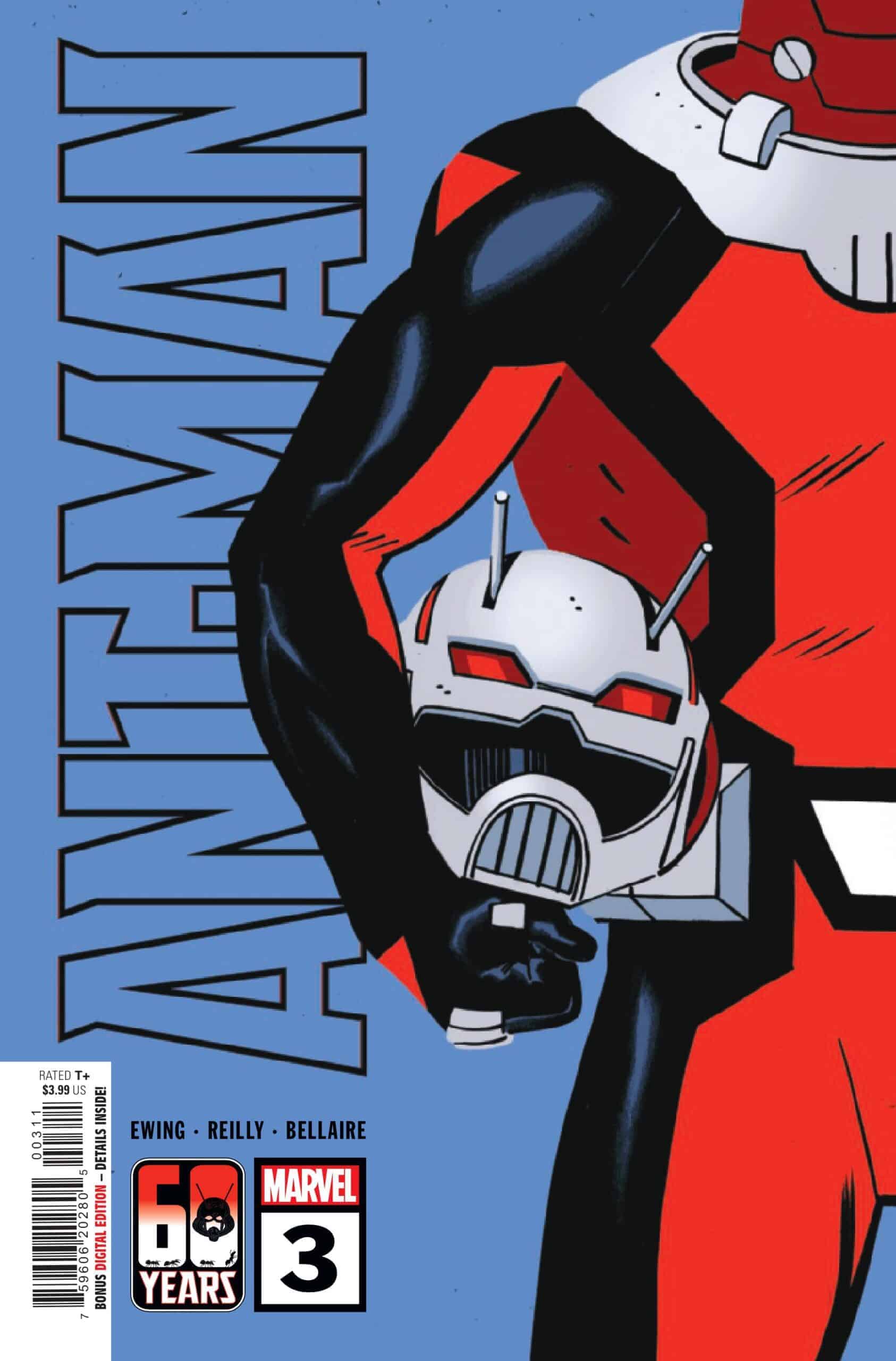 It's the 60th anniversary of the Miniature Marvel, Ant-Man! With the spotlight having already been shone on Hank Pym and Eric O'Grady, it's time to get acquainted with the Ant-Man of the modern day, Scott Lang! Can he and his daughter Cassie safely store PymTron away forever so that he can't sew chaos for he Avengers or will the villainous Black Ant thwart their heroic efforts?

Scott Lang will probably be the Ant-Man that truly stands the test of time. 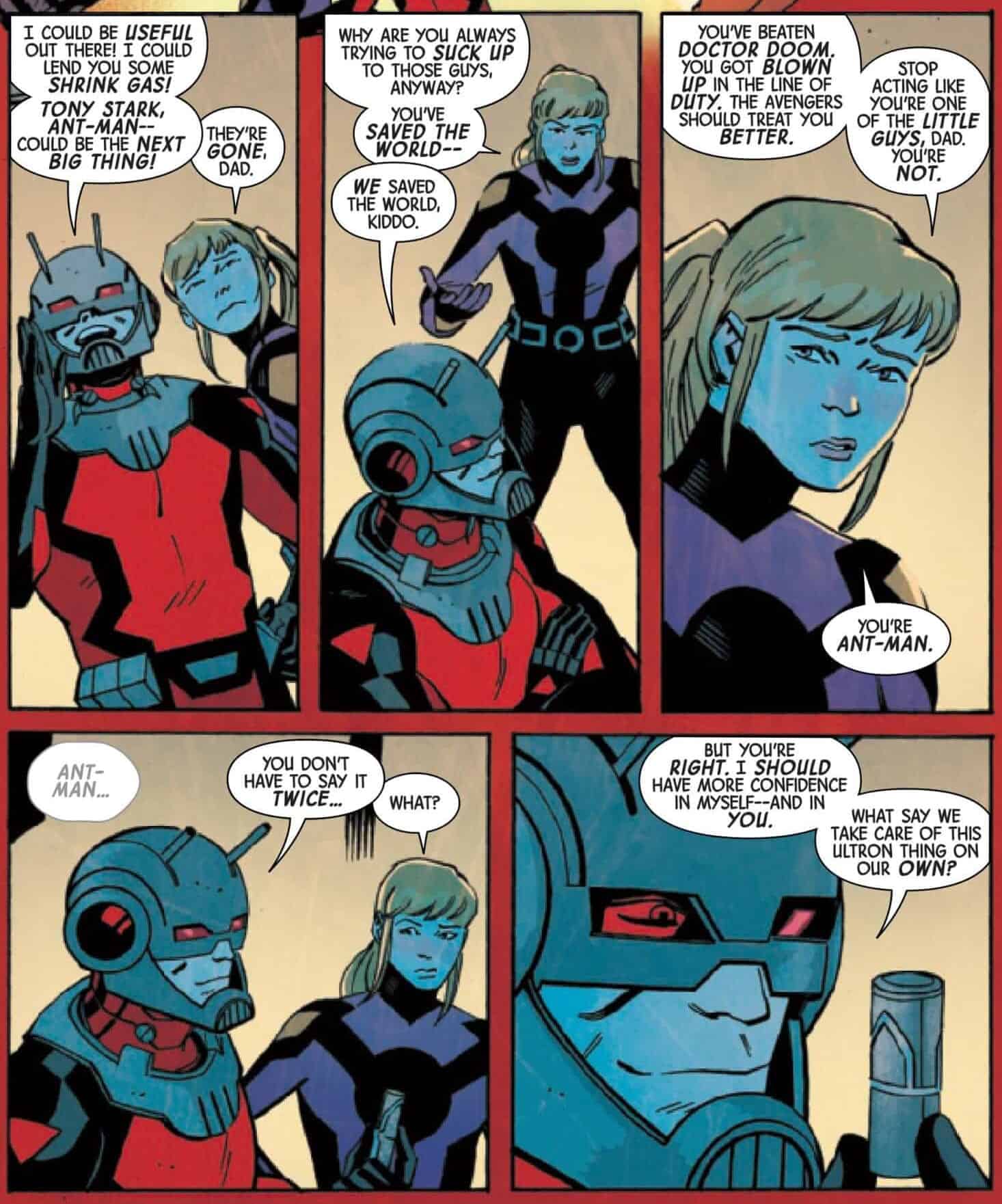 While Hank Pym was the first, his character is slightly tarnished by THAT panel and he’s better known currently for being half of a murder-bot by being fused with Ultron. Eric O’Grady is the worst and while he’s my absolute favorite, his series only lasted twelve issues and maybe only a handful of people knew that he existed before becoming a fan favorite character as Black Ant with Taskmaster. Scott Lang, however, has actually been Ant-Man longer than Pym and has had more redemptive story arcs than O’Grady, serving as the possible reason as to why he was the Ant-Man chosen to become the star of the movies. Al Ewing recognizes all of those traits and utilizes them to great effect in this issue while also heavily featuring Scott’s daughter, Cassie, as his partner.

Ewing does an absolutely fantastic job spotlighting Scott Lang by making his adventure a family affair while also wrapping it around the overall plot for this miniseries! With Thor and Iron Man trying to figure out a way to safely store Ultron away so that no one can reactivate him, Scott and Cassie arrive to take care of it. Scott tries to act humble about the task, but Cassie speaks up against him, saying that he’s not “one of the little guys” because he’s accomplished so much as a real Avenger. It’s heartfelt and speaks to both of their characters; Scott, not wanting to rock the boat and staying on good terms with the leadership, and Cassie, loving her father while continuing to be anti-authority, harking back to her Young Avengers days. 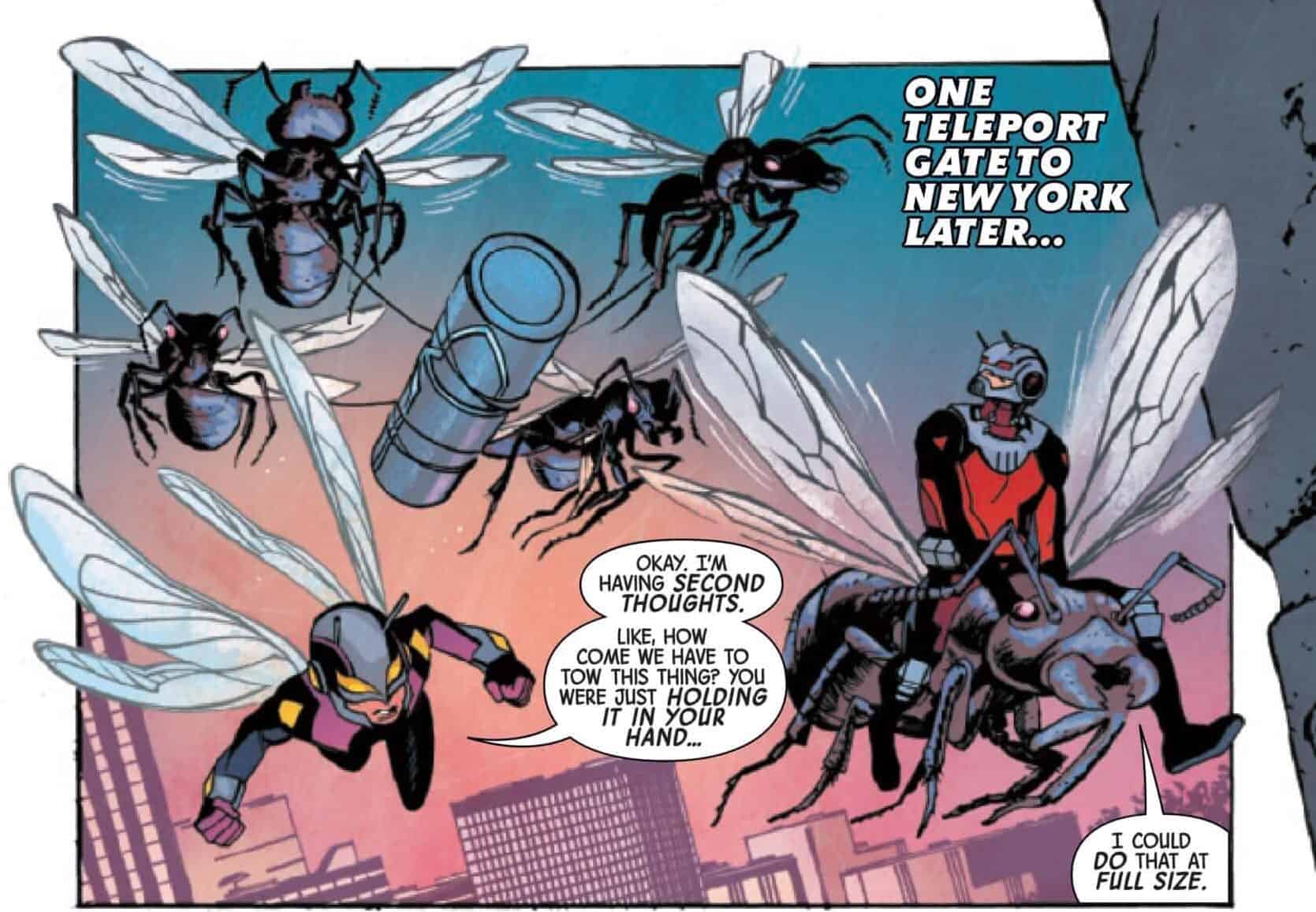 However, when they take PymTron back to New York, Black Ant is waiting for them, which is the FIRST time Scott Lang meets Eric O’Grady. While Cassie and Eric fought each other during The Initiative Era, Scott was dead at the time and they had never crossed paths in the intervening years when both of them came back to life (As the original Eric was killed in Secret Avengers). In the end, Scott and Cassie battle Eric and Al Ewing makes sure to emphasize how well the father-daughter duo work with each other and how much they love it as they almost defeat O’Grady before he manages to free PymTron, ending the book on a cliffhanger in the far future with our newest Ant-Man!

Tom Reilly’s art continues to astonish as he draws primarily in his own style for this issue. Character faces are distinct and the way that expressions are able to shine through, even through the bulky helmets that Scott and Cassie wear, shows how well Reilley is able to capture emotion through his art. His lines are very clean and thick, giving characters, clothing and backgrounds a great sense of detail. This is especially helpful in giving the eyes something to latch on to and enjoy as every page is made even better with each character’s distinct looks and sense of texture.

Reilly also shows an aptitude for drama and action paneling. When Cassie and Scott are flying ants to Hank’s old lab, the ants’ wings flutter and we get to follow their miniature movement in a nice, sequential order. Reilly utilizes a variety of shots from wide angles to close ups of Scott and Cassie so that readers don’t get bored looking at the same kinds of flying frames. When the fight between the Langs and O’Grady starts, Reilly does a great job of utilizing each parties power sets with Cassie growing larger in size to swat Eric away, Eric shrinking to try to escape when things go awry and a terrifying shot of Eric being caught in a spider’s web thanks to Scott’s helmet modifications. 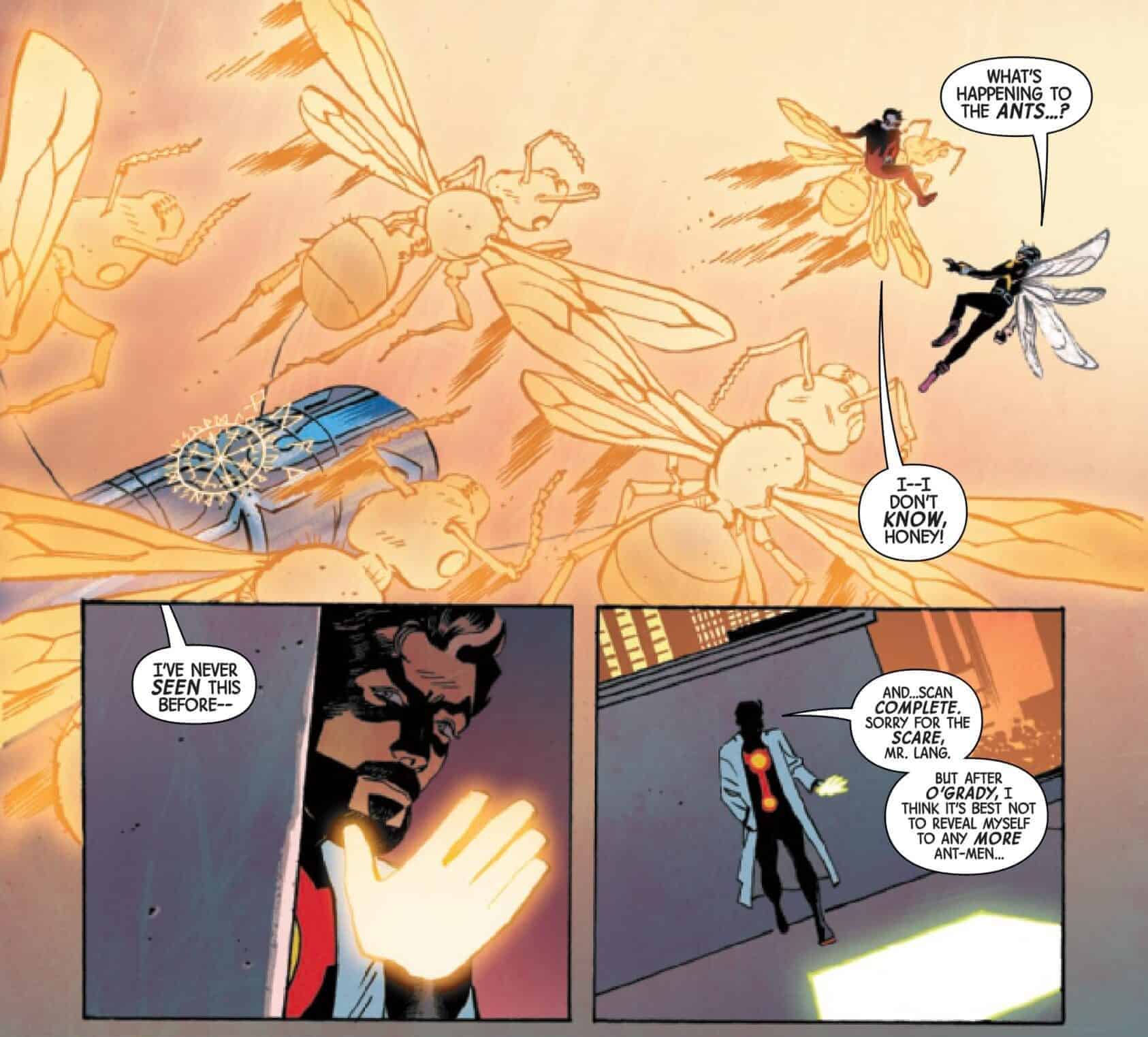 In my personal opinion, however, the best shots in the book are when PymTron is able to telepathically talk to Scott and the book shifts from its lighter tone to a darker, more sinister feel. Reilly is able to convey Ultron’s evil by using his Pym half to try and trick Scott into releasing him, giving him gentle seeming facial expressions with nothing behind the eyes. This then shifts to the villainous smirk of the robot that killed Hank Pym as he revels in the destruction that he would cause if released.

Jordie Bellaire’s colors only help to make this book even more awesome than it already is. Using a combination of a flat style with a bit of a texture brush technique, Bellaire uses a variety of colors to create a near perfect viewing experience. Yellows, reds and hazy blues that fade to grey make for great background colors as they tend to be softer, allowing for character actions and outlines to pop against the lighter environments. 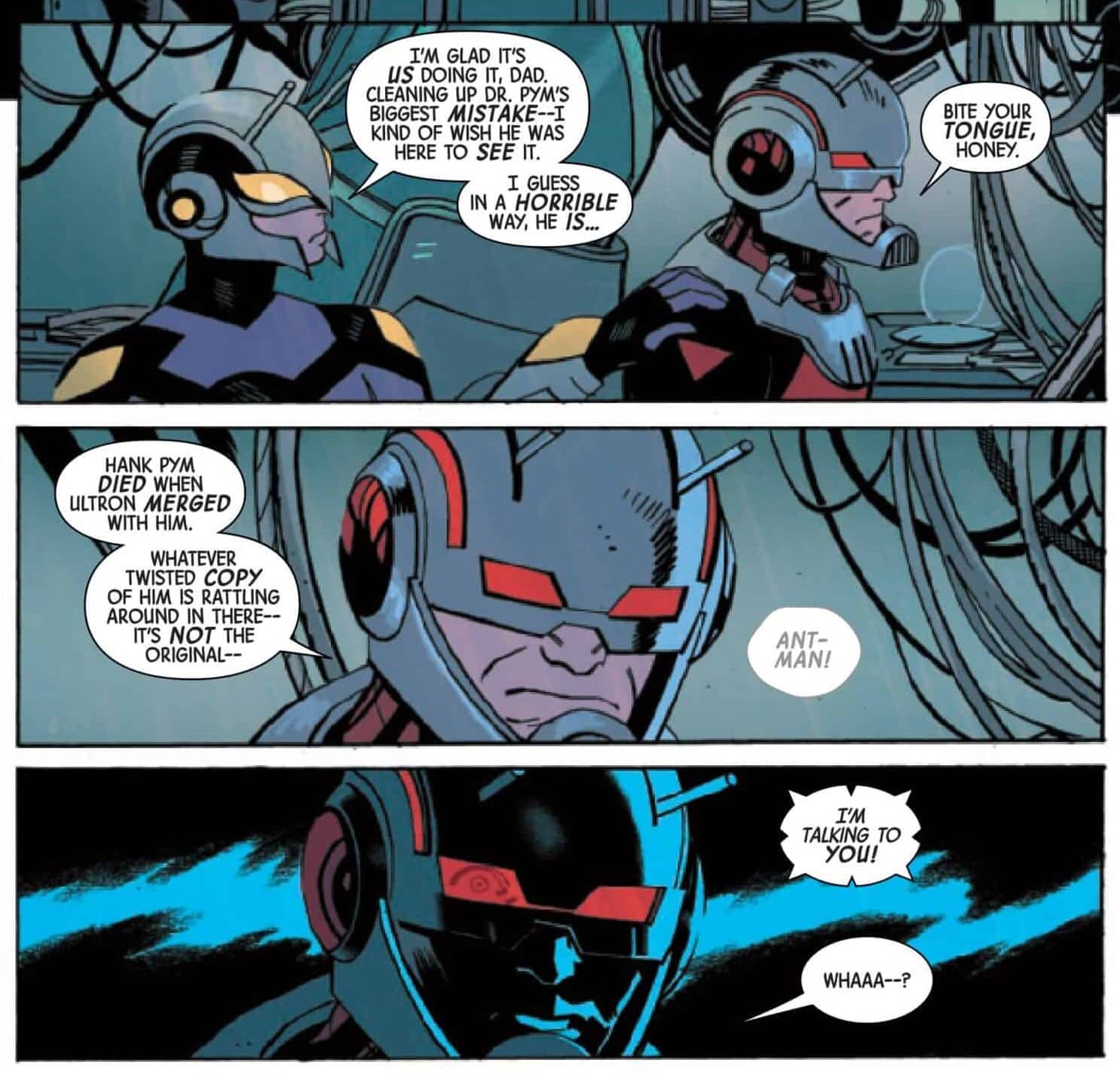 In terms of regular old contrast, Bellaire doe a great job of utilizing color to contrast Eric O’Grady and Scott Lang’s personalities through their costumes; With Black Ant’s outfit being mostly black with red shoulder pads, gloves, belt, boots and eyes, he is presented as the exact opposite of Ant-Man whose costume is mostly red with sleeves and legs of black – it also helps that both of them are redheads with dubious pasts.

And, as with the aforementioned PymTron scene, Bellaire gives these pages a chilling feel through the use of a light blue emanating from Ultron’s chest and face surrounded by very dark inks. Ultron looks like a horror movie character as he gazes down towards a miniature Scott. It emphasizes the terror that Ultron is capable of and how Scott has never faced an enemy quite as dangerous as him, even when he fought Doctor Doom.

Truly, this miniseries has made me a bigger Ant-Man fan. Al Ewing, Tom Reilly, Jordie Bellaire and Cory Petit are crafting an ant-mazing story that celebrates a founding Avenger and the legacy that he left behind, for worse and for far better! With amazing art, storytelling, color and lettering, this is one of the best books Marvel is currently publishing!