Aquaman #50: Amnesty for the Old Gods 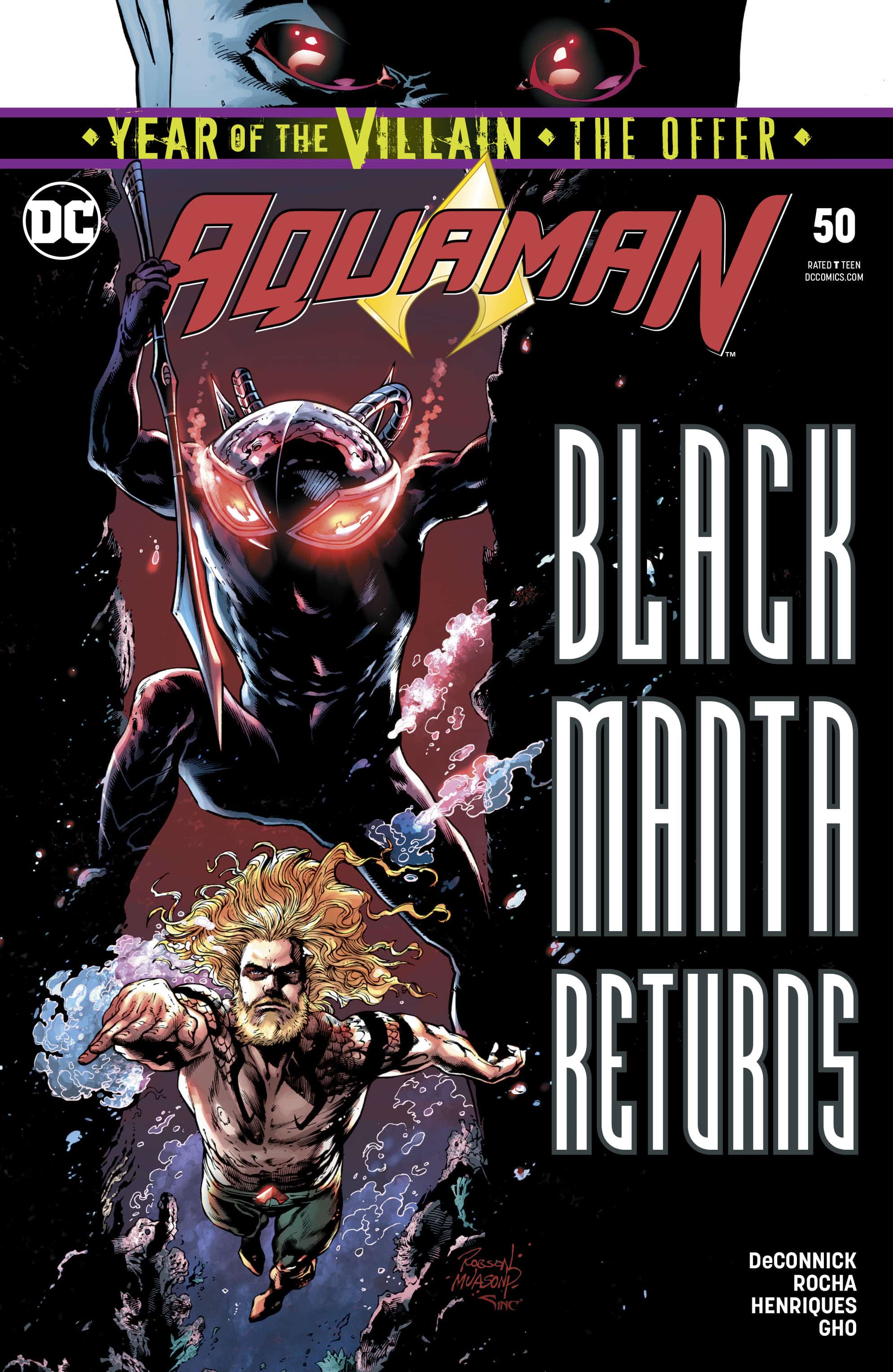 Arthur returns to amnesty bay amid much fanfare, gets the nature of his death out of the way quickly and easily (in Tom King's Batman it would have been 3 arcs of Bruce slowly sliding into malaise culminating in "I died" in the 18th issue after a nursery rhyme was recited for the third time) and manages to set up the next arc fairly organically. Meanwhile Black Manta gets an offer. Also Mera is marrying Vulko?! 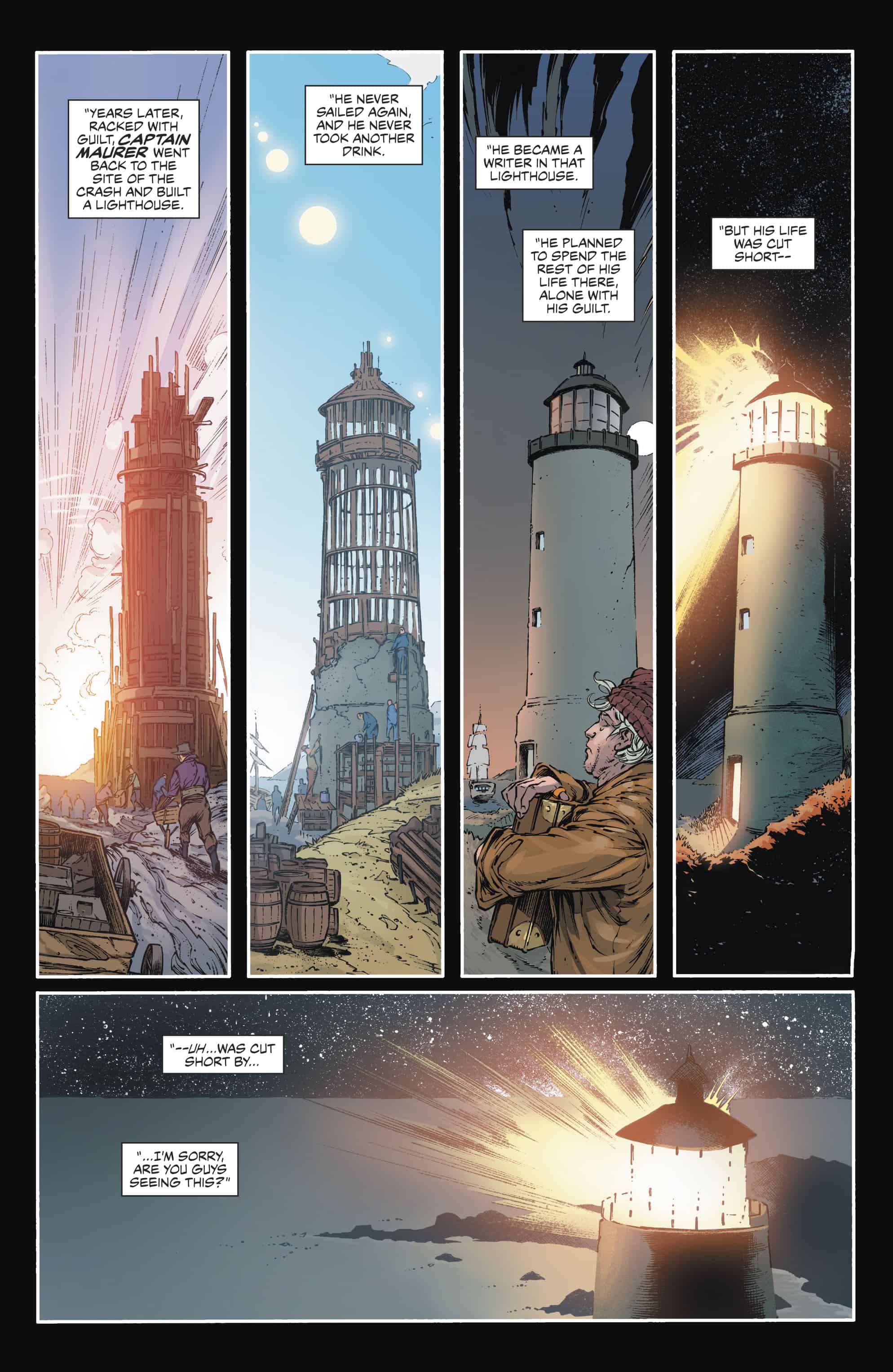 A really fun oversized issue that felt a bit long in the tooth, but still breezed by for the most part. Arthur drops back into small town life without missing a beat and Wonder Woman comes to greet him in what has to be some of the best Wonder Woman in months! I’m curious if Kelly Sue Deconnick asked for WW and got Aquaman because this feels like a tryout to write her to me. Her WW is full of heart and although she does talk a little about open borders does so very organically. I did want to say if you want to skip the amnesia stuff this is a good jumping in point if you just feel like getting your feet wet to test the waters. If like me you’ve kept current on the fishy goings on of Unspoken Waters and Salt Goddesses then this is a solid amount of payoff good on you for staying the course! 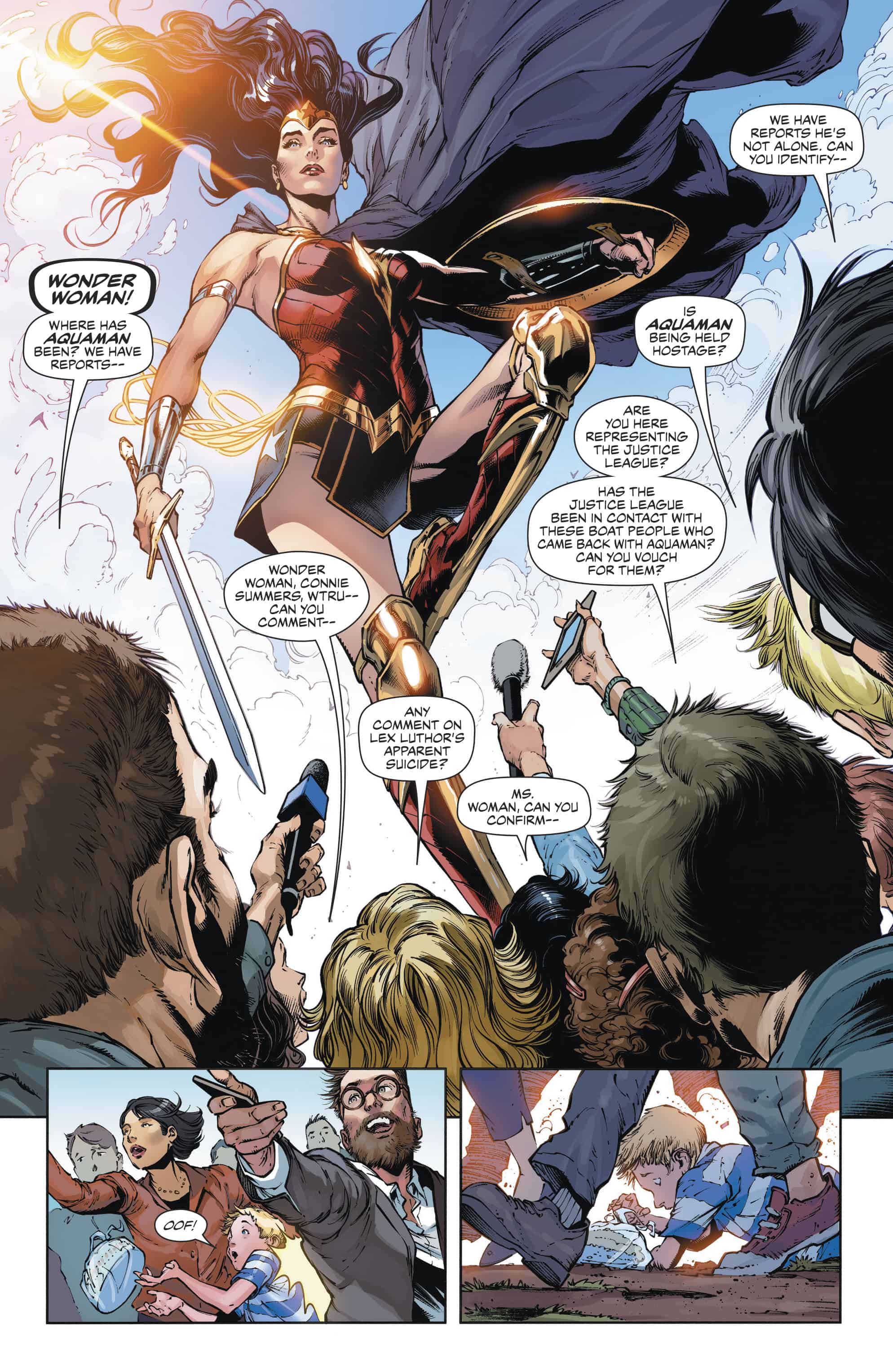 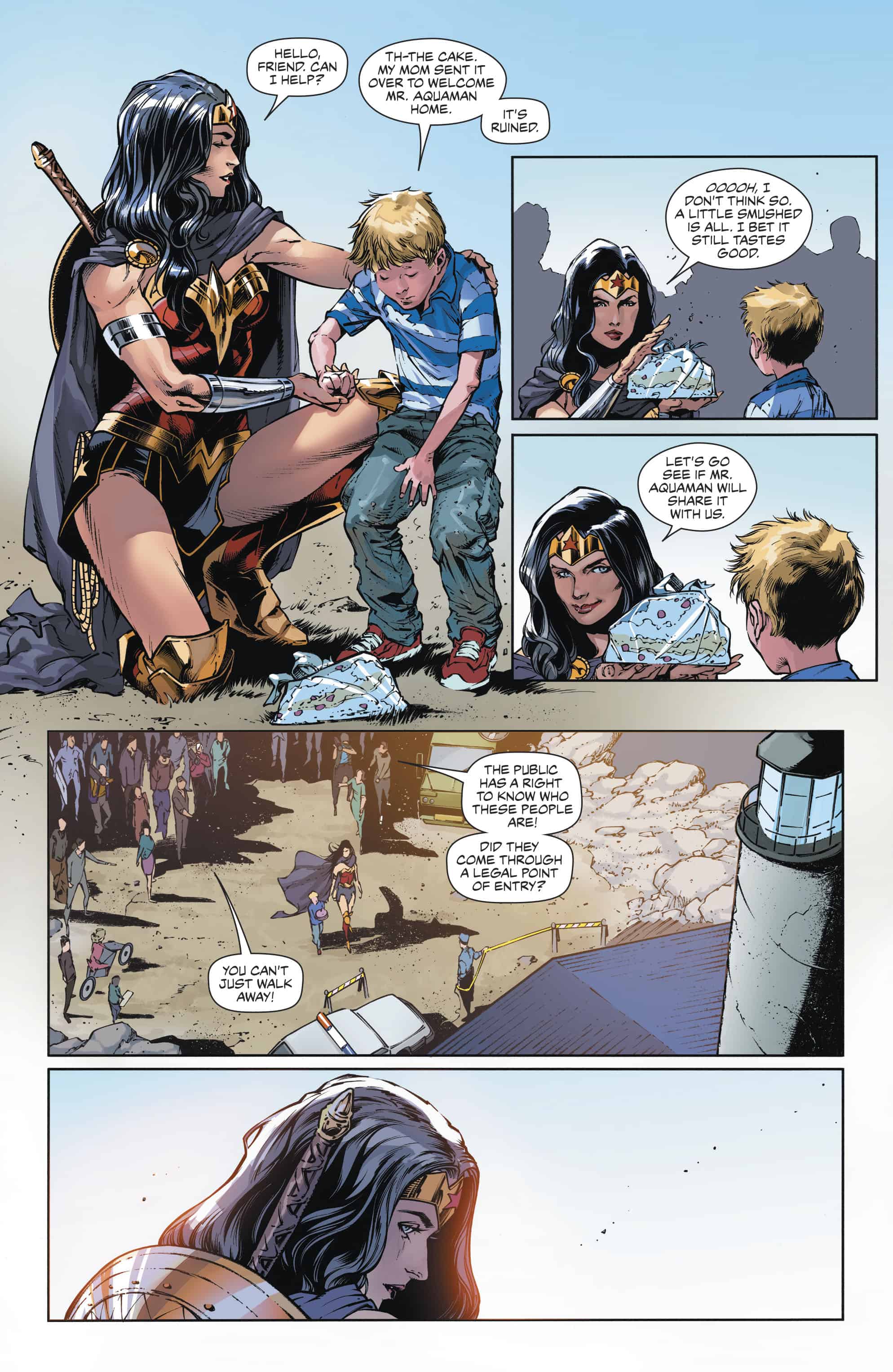 I would be remiss in writing this review without mentioning Arthur’s newly professed love of cereal, which delighted me, and odd proclivity of pouring milk on cake, which horrified me in what might possibly be the quickest turn of emotion ever. What the what? Who does that? Complete and total craziness I want no part of I tells ya!

All joking aside this issue also included a tour of the town for the old gods. In a seemingly inevitable plot progression an old decrepit lighthouse outside of town catches the gods’ eyes. The gods are told to stay away because it’s haunted by Shuma Gorath or Ogdru Jihad or whatever, of course meaning they’ll have to go there first chance they get. Kind of silly but I like the idea of the gods running around like some kind of ancient scooby doo, solving mysteries and fighting monsters hahaha. 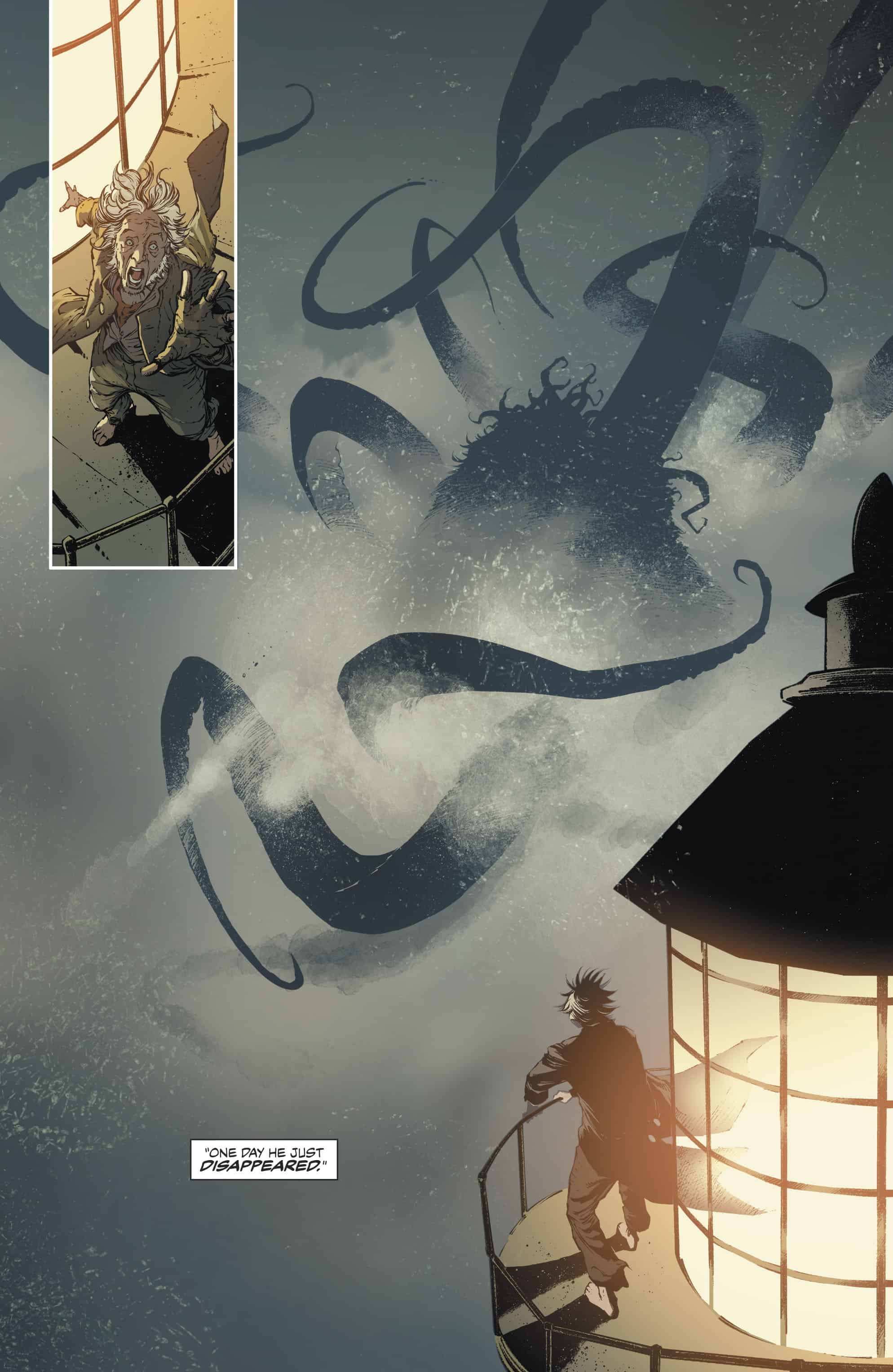 Again, I feel that were Kelly Sue Deconnick a man, it might be taken very differently the way she portrays Mera. By which I mean to say (having been married for some years) Mera acts exactly like a woman would, refusing to reach out to Arthur instead insisting he reach out to her and marrying GD Vulko rather than admitting she might be partially at fault (honestly neither party is blameless, but only one of the pair got BEATEN TO DEATH WITH WATER). A bit silly, but also a bit perfect. 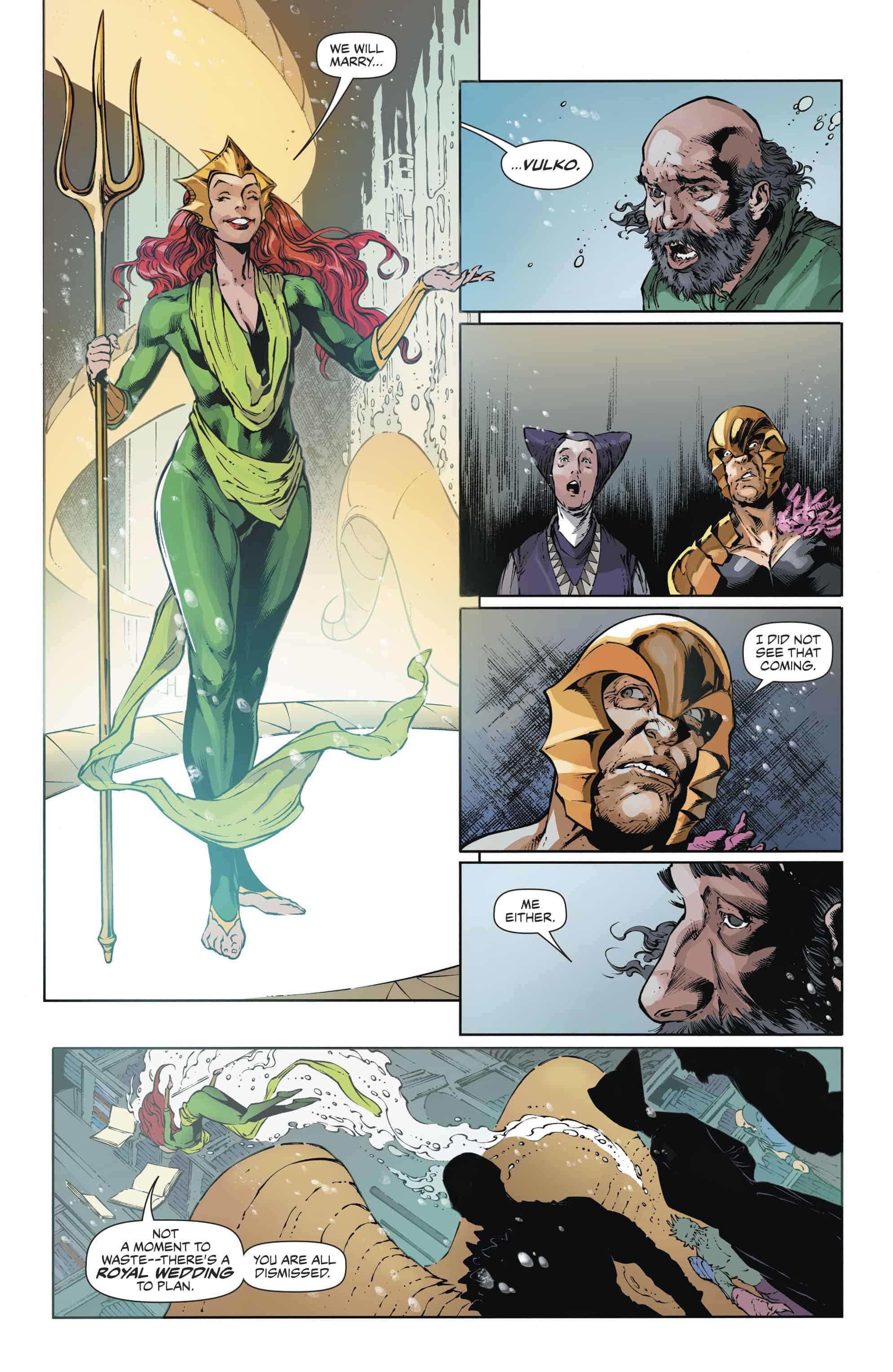 I’m happy to say Robson Rocha is back, not that i wasn’t enjoying Victor Bogdanovic last couple issues but Rocha paired with Daniel Henriques  and Sunny Gho is SUBLIME! The most minor panels are rendered phenomenal through his use of detail and nuance and even the dumb panels of Arthur eating cake like some kind of psychopath look great despite sickening me. The art in the offer is also phenomenal despite my dislike of the material. 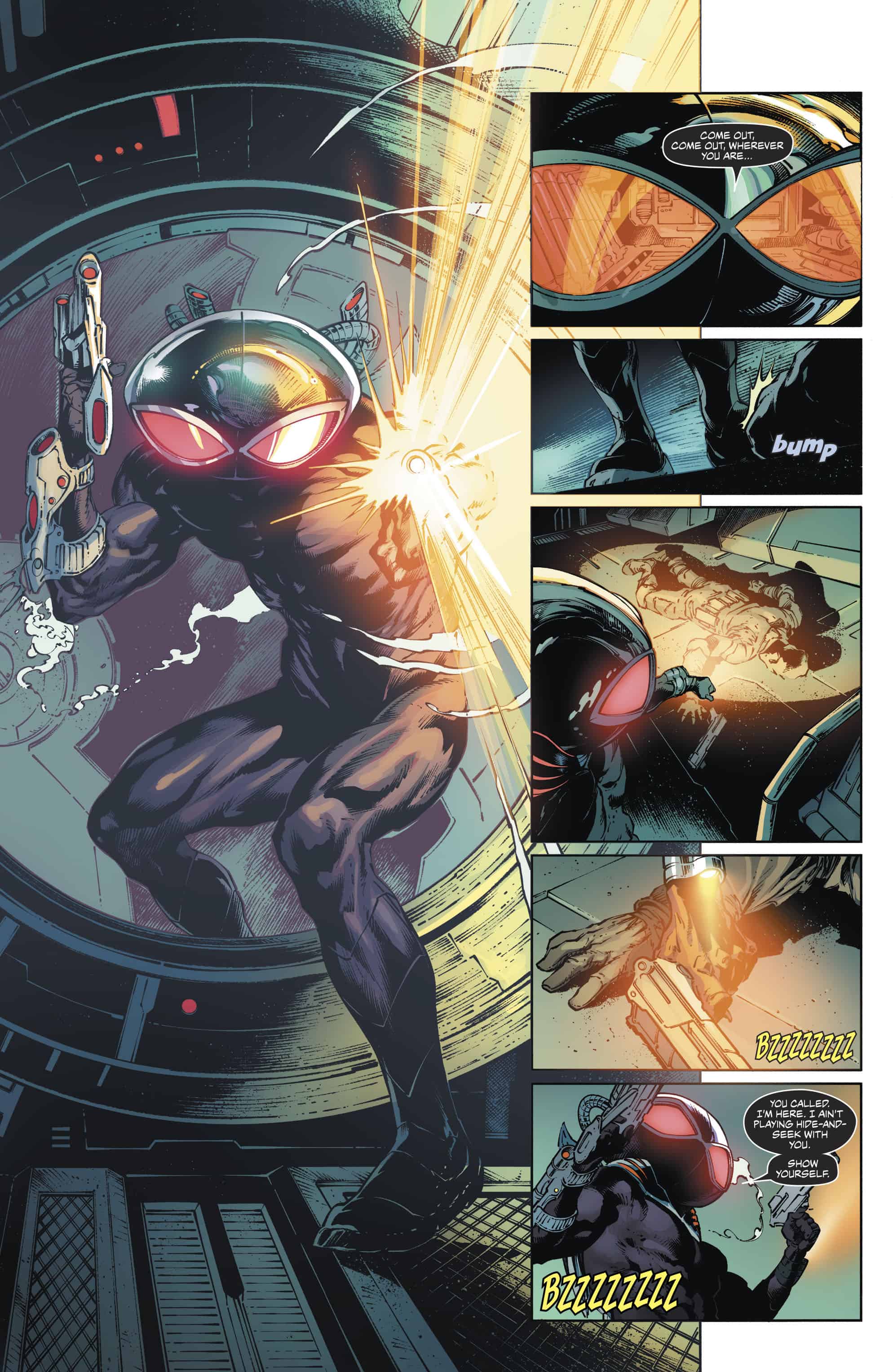 Last but not least we get an offer from Lex to Black Manta, who we haven’t seen in a while, since he betrayed the Legion of Doom. Am I the only one that hates these? They’re editorially mandated so I don’t blame the creative team whatsoever and it doesn’t impact my score I would just hate not to mention it. I really dislike the offers on an even conceptual level as it involves powering up villains in order to overpower the heroes whilst doing minimal legwork in a lazy Forever Evil/ Villains United/ Underworld Unleashed/ Dark Reign/ Secret Empire knockoff that somehow does less than any of it’s predecessors. I’m not looking forward to a single one of these offers or whatever comes next. Stupid.

I do need to knock the cover down a couple points for being misleading, depicting a slugfest between Manta and Arthur that never came. Honestly what we got was probably better i just hate misleading covers.

A really good issue, one of the best I read in recent memory. Just great.

Aquaman #50: Amnesty for the Old Gods