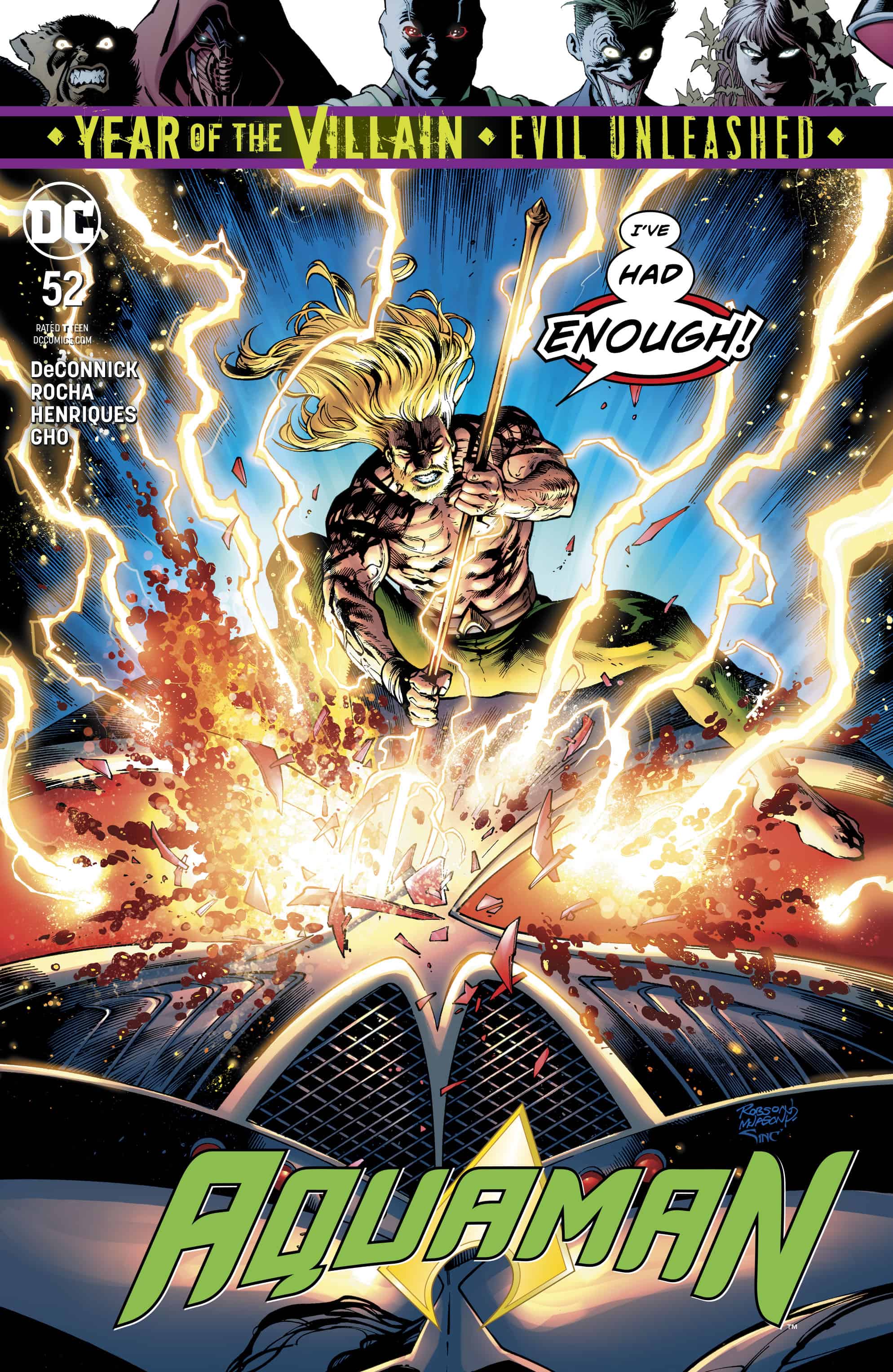 Amnesty Island has a problem... a giant sea monster problem! 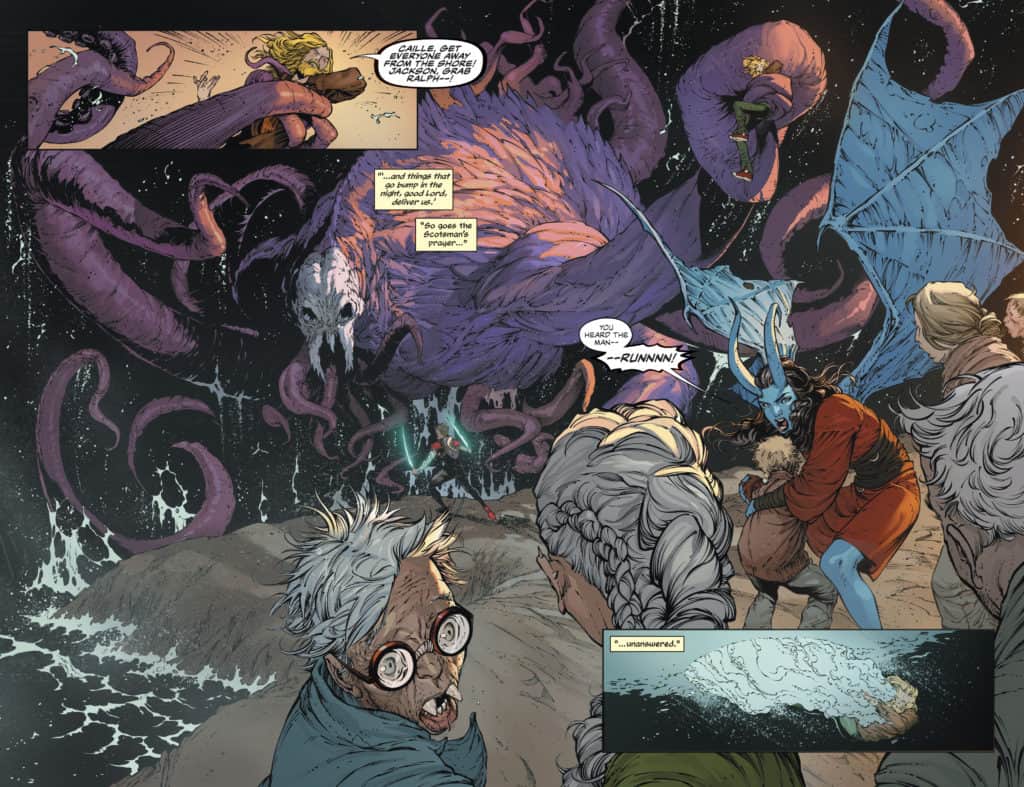 Aquaman and his godly allies (Wee, Caille, etc.) put up a valiant effort to fight it off, but not even with the unexpected assistance of would-be Aqualad Jackson Hyde do they make a dent in the creature's hide. 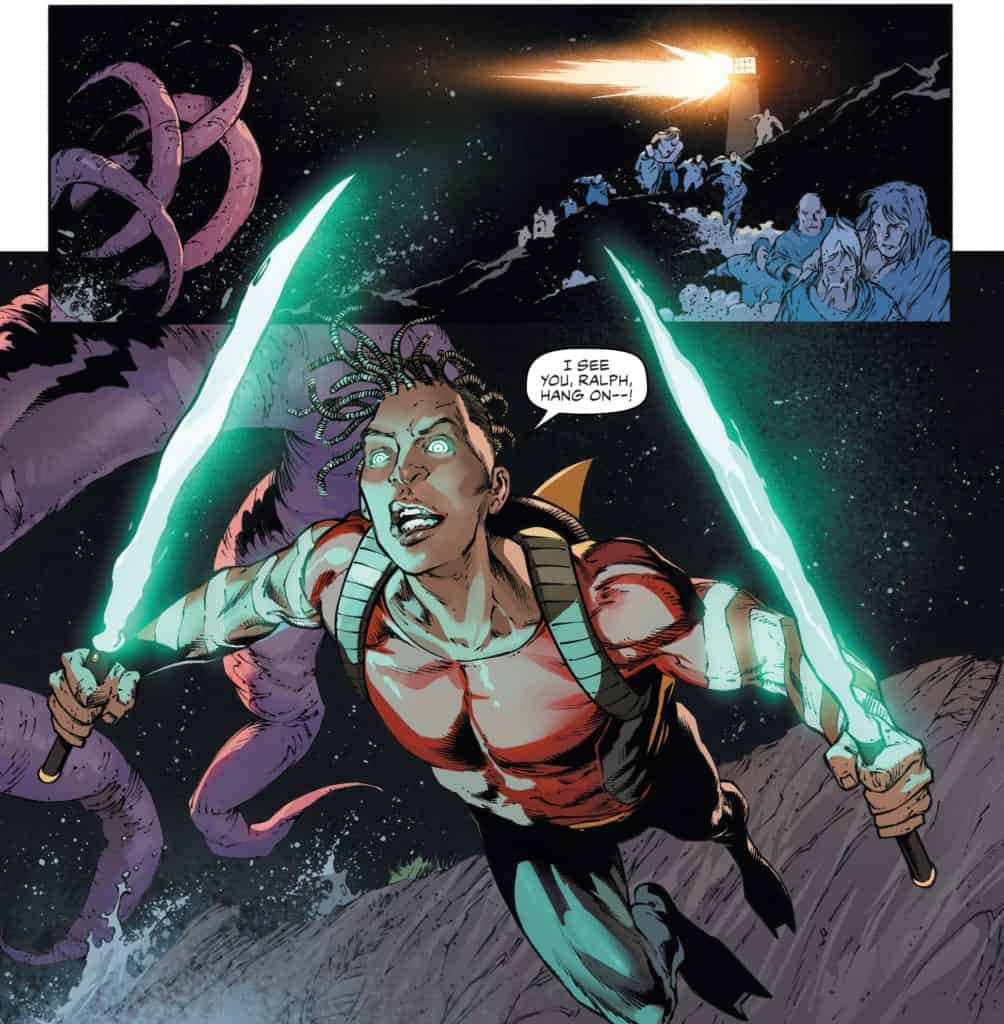 Finally, Aquaman renders a damaging enough blow to cause the creature to retreat. 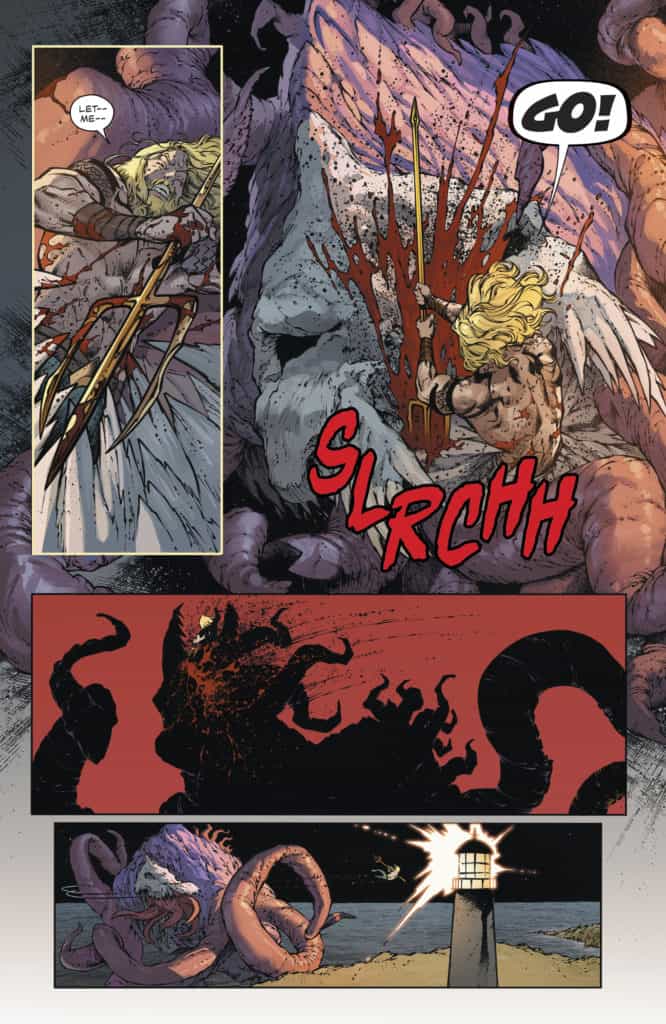 The island's historic lighthouse is destroyed in the process, though. Once the creature is gone, Amnesty Island tries to go back to normal, but a new arrival will prove to shake things up even more!

Elsewhere, Black Manta and his giant Mecha-Manta are on the move... 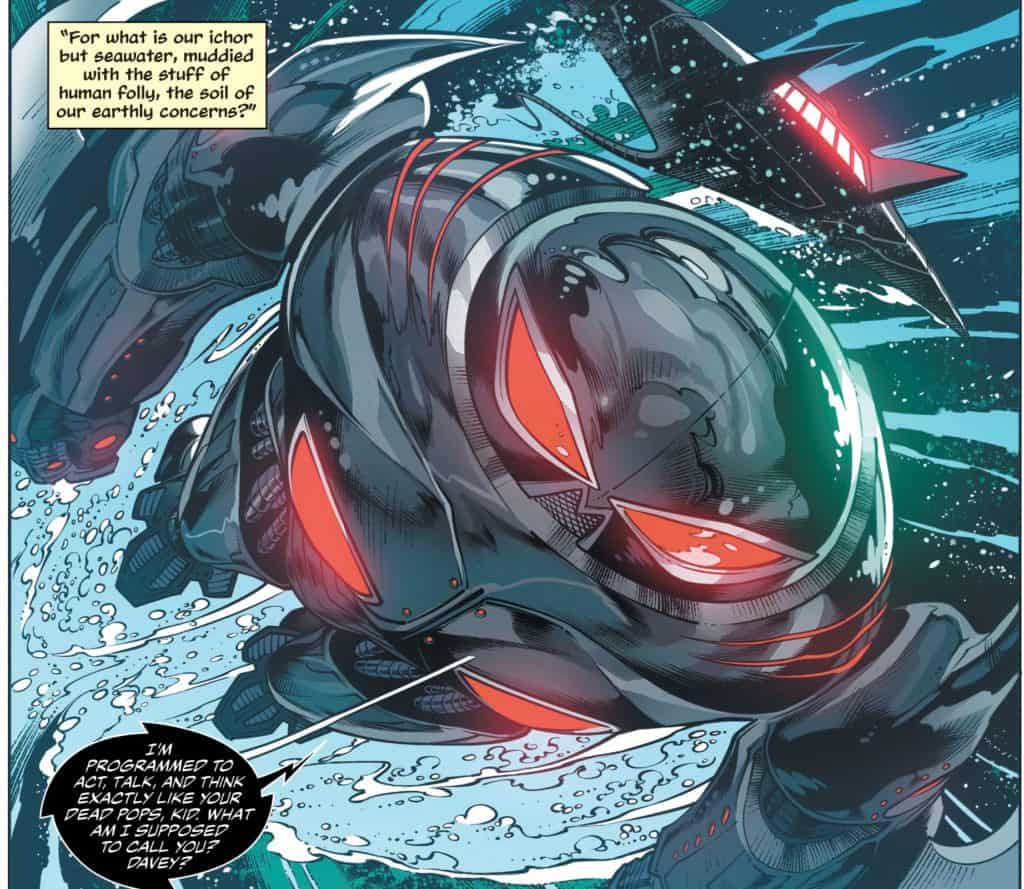 Under writer Kelly Sue DeConnick’s stewardship, Aquaman has taken on a literary bent that suits the character to a tee. Arthur Curry has long been a character steeped in mythology, largely owing to classical stories of Atlantis but also from the old “heavy is the head that wears the crown” trope. DeConnick’s run is a major shift from the political intrigue of previous writer Dan Abnett; underwhelming at first but suddenly bursting to life with a full-bore dose of old world mythology and associated stakes of that level. It doesn’t hurt that the narration wouldn’t be out of place in 19th-century English literature, lending the title a certain amount of weight beyond “Aquaman swims and talks to fish and stuff.”

Having settled in Amnesty Island after a brief bout of amnesia (and shortly being called, ah, “Andy”), Arthur is currently a man without a country (hardly a unique status for our hero, I know). Expatriated to land and avoiding Mera for the time being due to a bad response to being told, “You’re going to be a father,” Aquaman has been painstakingly attempting to rebuild his existence brick-by-brick. Amnesty Island isn’t without its ghosts, though – its founding centered around a lighthouse built by a former boat captain trying desperately to atone for his sins, who mysteriously disappeared after reporting a giant sea monster sighting. What the creature’s true connection is to Amnesty Island is shrouded in mystery, but it certainly has an air of urban legend or “that-which-must-never-be-spoken-aloud” ghost stories.

This issue, then, comes as a bit of a shift in the prevailing narrative currents – almost all action, and big-monster-fighting-action to boot. Not that that’s a problem – DeConnick is a skilled enough writer to know when it’s time to goose things a bit with a solid action beat. And fortunately, she’s capably aided by artist Robson Rocha, who has during this run proven to be a talent of no small talent. He knows how to adequately convey the scale needed to do DeConnick’s story justice, with an eye for detail that doesn’t override the inherent humanity needed to make readers care about these deities and god-men. Oh, and Jackson Hyde – always a welcome presence, despite his almost comical ineffectiveness against the giant sea creature.

DeConnick and Rocha have been asking readers, from the start of their run, to set aside their preconceived notions about what a superhero story can be and embrace something a little different. Something that requires a bit more subtlety and thought as opposed to run-of-the-mill superhero slugfests. It’s not going to be for everyone – but then, isn’t that always the case with things that ask readers to try something new, unique, or different?

Although a bit straightforward with its action beats this month, Aquaman continues to be the under-the-radar gem DC tends to specialize in, one that challenges readers' preconceived notions of what a superhero comic can be. The art is gorgeous and the narrative is big and graceful yet also subtle - a rare combination, but one worth checking out.