Sacred, historic statues of Atlantis have been destroyed by (presumably) the surface world, and Mera's none too happy about it... 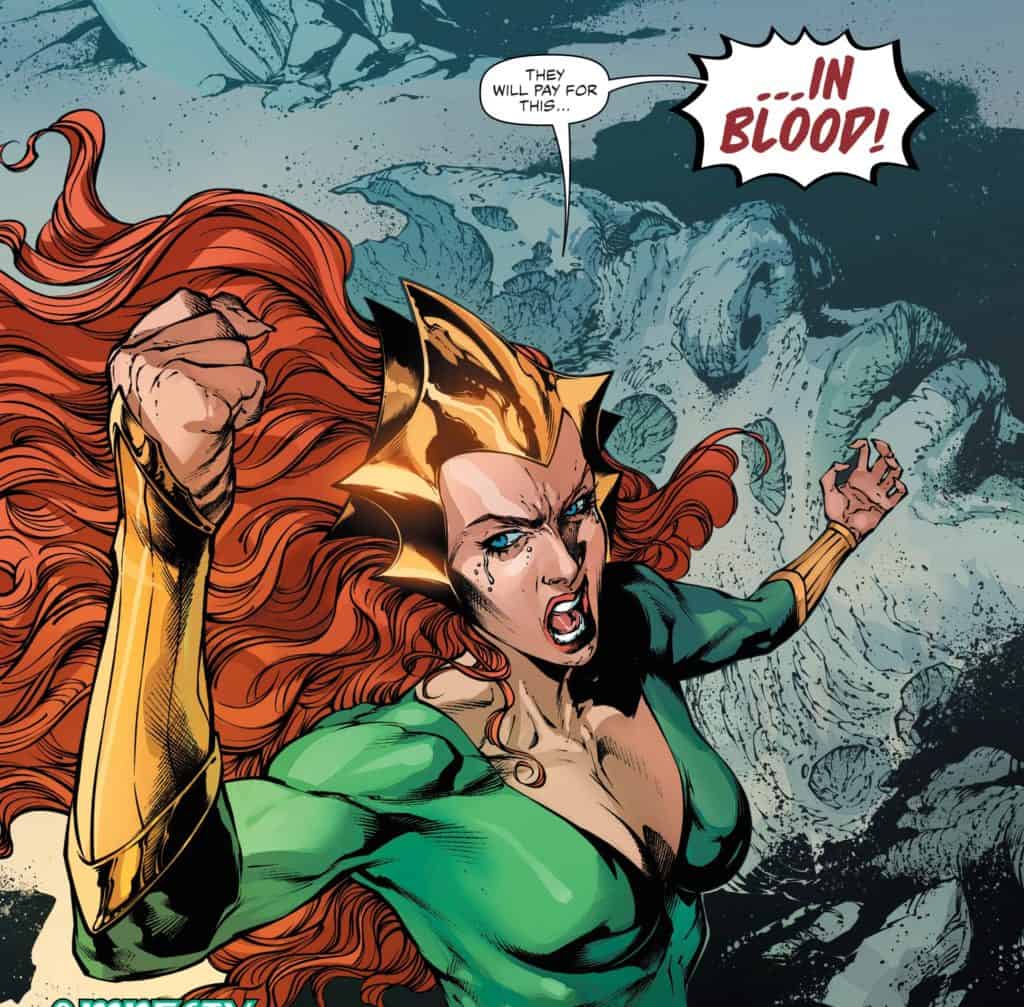 Her entourage and a battle coterie head to Amnesty Bay, where her kinda-missing/kinda-ran-off-when-he-found-out-his-wife-was-pregnant husband Aquaman has been hanging his hat of late. But Arthur has problems of his own: the founder of Amnesty Bay has returned... but he should have died 200 years ago!

Captain Tristram Maurer tells his tale, one replete with monsters and myth. But he has one warning in particular about the giant sea-beast fought last issue...

Before Arthur can digest this nugget, though, Mera makes her formal arrival! Awkwardness ensues.

But before THAT particular soap opera can play itself out, Amnesty Bay is attacked by a wholly different kind of giant monster... Black Manta's giant mech-bot, courtesy "Year of the Villain!"

Folks, this ain’t your daddy’s Aquaman.

He’s not the fourth-string guy from the Justice League waiting around for a water-based problem to materialize; he’s not the fluffy Superfriends goofball riding around on a giant sea horse; he isn’t the wink-wink “isn’t it ironic how he doesn’t talk to fish at all, but everyone thinks he does?” foil; nor the angsty king/ex-king constantly brooding about his dead kid. He sure isn’t Jason Momoa. Heck, this guy even has both hands.

No, Kelly Sue DeConnick’s Aquaman is one thing all of the above iterations of the titular Atlantean king isn’t: written cerebrally for adults.

That’s not to knock any of the above-mentioned iterations of Thomas Curry’s favorite son. They’re all great, worthy of respect at various levels and for different reasons. (And, confidentially? I kinda love them all.) Aquaman is an absolute beast of a character who very, very rarely gets his due. Which is what makes DeConnick’s take on the character so much more remarkable. He’s still recognizable as everyone’s favorite orange-shirted mega-hydrated swimmer, but is portrayed in a way that doesn’t remotely pander to the tights-and-fights set.

Her Aquaman is a man – read, an adult – adrift, swept from the world he knew and trying to make sense of both where he is and where he’s been. Who he is versus who he was. An adult moving from one phase of his life to the next, and absolutely terrified. A man about to become a father!

But he’s also swept up into a subtle world not of supervillains and world-beaters, but old gods, mythology, and superstition. This issue’s tale by Captain Maurer fits the current bill perfectly; it’s at once ominous and foreboding, full of (deliberately) vaguely-defined monsters and threats that have returned from myth to wreak havoc today. I’m reminded of the opening of The Fellowship of the Ring: “Much that once was, is lost. For none now live, who remember it… History became legend. Legend became myth.”

Robson Rocha is a fantastic, Neal Adams-mold artist for this book, simultaneously grounding and lifting it to epic heights throughout. This issue he’s joined by penciller Eduardo Pansica; the two of them work seamlessly together to paint a picture of a world both lived-in and mythic. Together with the gorgeous coloring courtesy of Sunny Gho, the book has a mature look to it to complement the writing.

DeConnick’s script, though, isn’t just high-minded fantasy and sea beasts and ghosts. The soapy drama between Arthur and Mera – awkward, but also tender and loving – is great because of how brilliantly unnecessary it is, a wonderful comment on how couples’ biggest blowups often come from the smallest misunderstandings. But that’s not to say there isn’t some real tension between them that’s really driving their rift. She’s queen; he isn’t king. She’s pregnant; he’s freaked out. You know – grown-up stuff. All the best drama in the world for a superhero comic, and nary a spandex punch to be thrown.

Well, unless you count the giant mecha-Black Manta gundam.

Wedged into the otherwise grounded story thanks to “Year of the Villain,” Mecha Manta is a silly, tonally mismatched foe for our more grounded Aquaman to have to do battle with. He’s handled as gracefully as DeConnick can muster, and to her credit, she’s leaning as heavily as she can into Manta’s misplaced anger toward Arthur as she can. It’s a well-intended swing, and not quite a miss, as she’s clearly doing the best she can with material being forced on her by editorial fiat – but all things being equal, Mecha Manta doesn’t fit this incarnation of Aquaman at all. Oh well. In DeConnick and Rocha’s hands, this title is one of the most criminally underrated on the shelves today – and no amount of editorial manhandling can change that.

Kelly Sue DeConnick and Robson Rocha's superb, mature take on Aquaman and his world powers along, bringing the thunder - and the sea monsters, and the Mecha Manta - with skill and aplomb that would make most other creators blush. Don't miss this book just because it's not your standard-issue Arthur Curry!