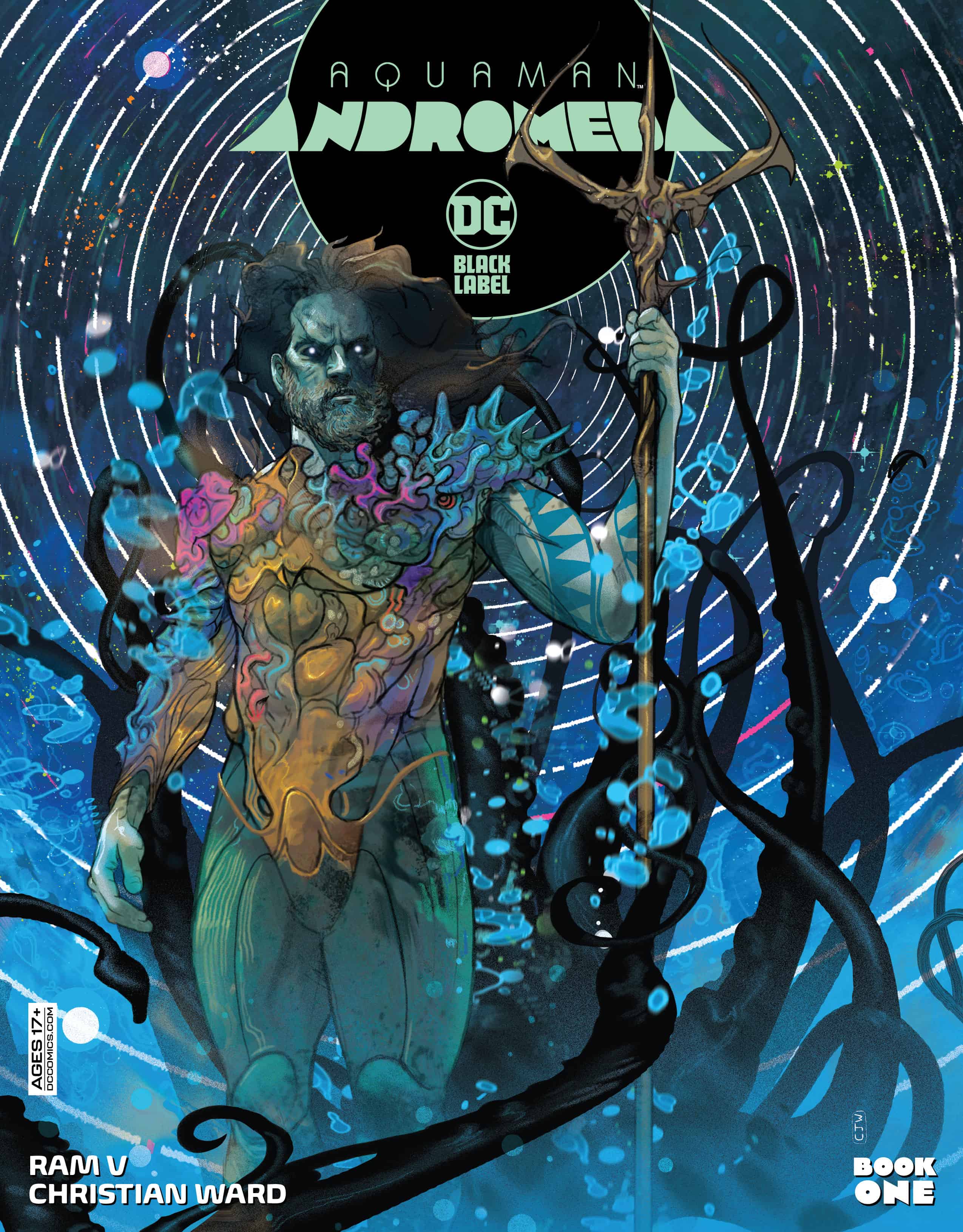 Deep in the Pacific Ocean, at the farthest possible distance from any land, sits Point Nemo: the spaceship graveyard. Since the dawn of the space race, the nations of the world have sent their crafts there on splashdown, to sink beneath the silent seas. But there is something…else at Point Nemo. A structure never made by man. And that structure seems to be…waking up.

The crew of the experimental submarine Andromeda, powered by a mysterious black-hole drive, have been chosen to investigate this mystery. But they aren’t the only ones pursuing it. Anything of value beneath the ocean is of value to the master pirate Black Manta…and anything that attracts Black Manta attracts Arthur Curry, his lifelong foe, the Aquaman! But heaven help them all when the doors of the mystery at Point Nemo swing wide to admit them in…

This is not your typical Aquaman story, this is a story that capitalizes on the dark mystery of the water that covers this planet: the sea, the ocean, vast and mysterious that has thrilled humankind and frightened us with its pitch black depths and otherness. Ram takes that idea and combines it with an alien mystery. This Aquaman is very much a thing of the sea, Arthur Curry gets a few pages but mostly he is a denizen of the ocean following the siren call
of something unknown in his habitat. Ram V focuses much of this issue’s attention on the crew of human explorers sent to Point Nemo in a prototype sea vehicle The Andromeda, which has mysteries of its own, to investigate the arrival of something from the stars that has crashed into the ocean. We meet the crew, learn their expertise, and then delve deeper into some of these characters’ own complicated pasts with water while in the present. There’s a wonderfully dark melancholy flow to the script from the psychologically chilling opening through the character examination of Arthur Curry to the examination of some of the crew of the Andromeda itself. Adding to the complexities of the situation Ram V brings in Aquaman’s nemesis The Black Manta who will no doubt turn an already complex situation into something even more difficult for Aquaman. 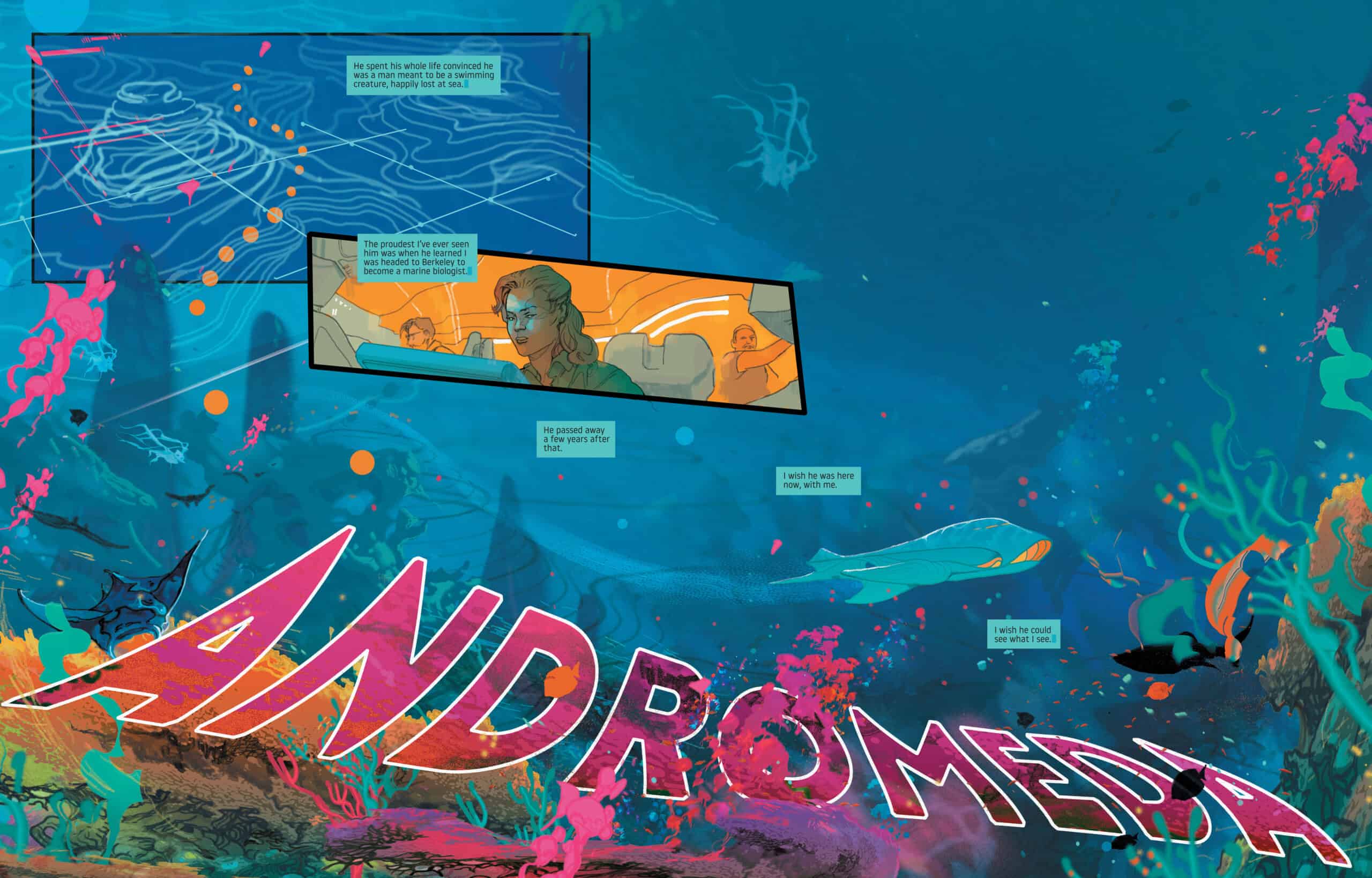 Christian Ward is a visual architect for this Black Label story and the execution is flawless. He takes Ram’s script and brings the ocean and its secret denizens to life with beautiful flowing blue hues and those neons in orange, pink, and foam green. The circular motif prevails everywhere, through water ripples, sonar pings, close-ups of eyes even the mysterious engine in the Andromeda our human scientists are traveling on, reminding us that this is a story of water at all times, a psychological element and attention to detail who’s impact is subtle but brilliant. His Aquaman design is deliberately alien, this is no orange and green-clad member of the Justice League but a sea creature clad denizen of the deep ocean. This contrast is emphasized when showing Arthur on land versus when he is in the water where the ocean blues show him as something not human. The hero is still there and there’s an action scene
late in the issue involving a monster from the deep where we are reminded of that but the focus on the otherness of Arthur feels key to what makes this story different from a regular Aquaman story. Aditya Bidikar is excellent on letters and Ward’s main covers and the several variants drive home that this is not your run of the mill king of the sea story.

A masterful script from Ram V combined with the singularly unique talents of Ward on art for a series opener that captures the ocean's vast openness, mystery, and depth and why it's thrilled and captured the human imagination.  With immediately resonant character writing and gorgeous visuals, AQUAMAN ANDROMEDA #1 is a superb psychological mystery of the ocean wrapped in a sci-fi and human drama setting with depths like the ocean itself.