Aquaman Annual #2: Save the Dog!

Amnesty Bay is home of Aquaman, which unfortunately makes it a target for villains looking to make their reps. One such specimen thinks it's a good idea to call himself "Sea Daddy..." 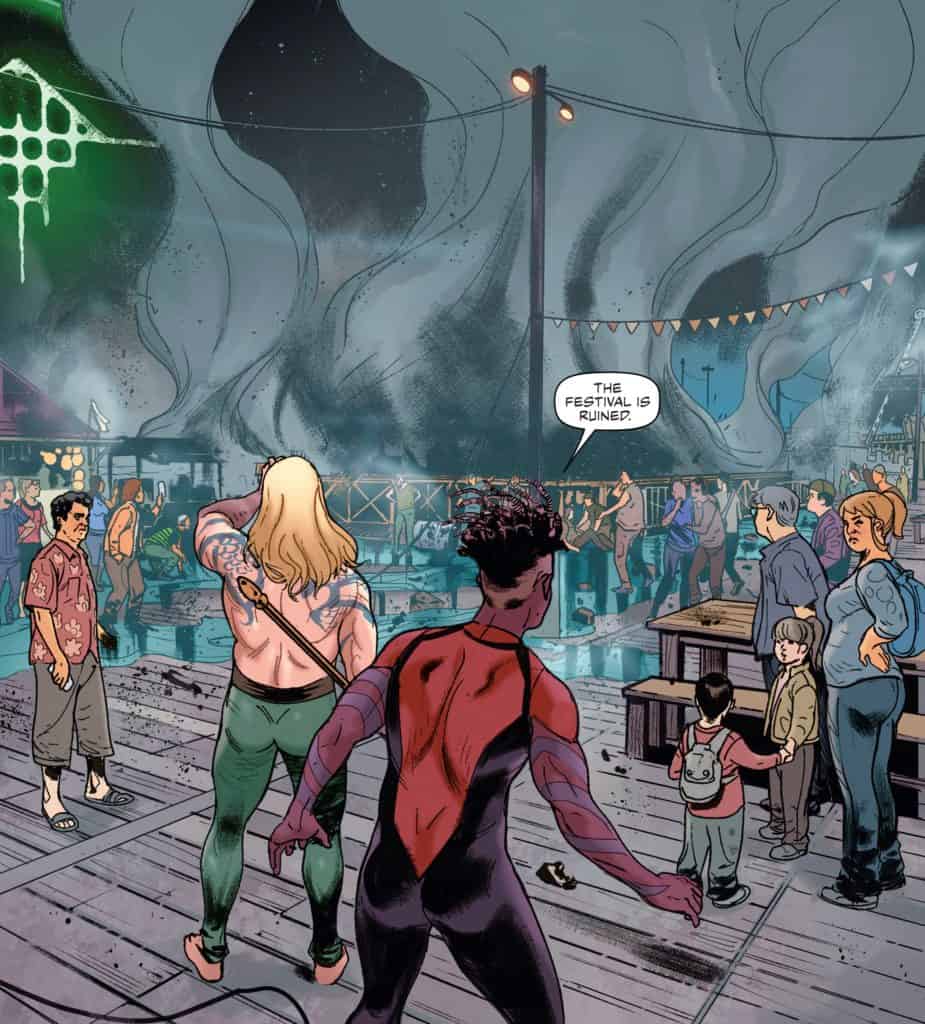 As if that weren't enough of a problem, in the midst of all the chaos, Aquaman's dog Salty has gone missing!

Aquaman's search for his canine companion brings him to the local grocer, where he encounters a strange confrontation of a different sort entirely... 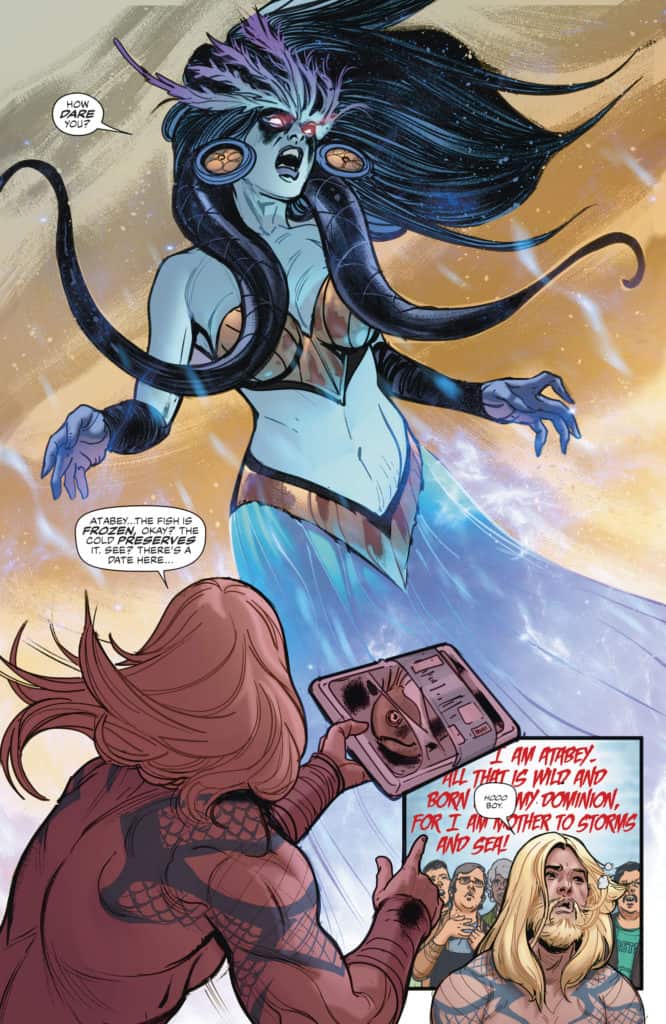 Aquaman's recently-acquired god friends are having a difficult time adjusting to life in Amnesty Bay. Atabey is not unique from her compatriots in this regard...

...But that fact leads Aquaman to a rather... unsettling realization as to where his dog might be...

Aquaman Annual #2 proves a fun outing, and a well-earned respite from the headier themes currently swimming course through Arthur Curry’s main title. Regular writer Kelly Sue DeConnick is joined by Vita Ayala but doesn’t miss a beat, and the softer-hewn art of penciller Victor Ibanez fits the lighter-weight nature of this story perfectly.

Annuals by design are tricky beasts. Originally conceived as means of telling larger stories that were too big to fit in the confines of regular monthly books, they eventually (d)evolved into a cynical attempt to fill scheduling gaps during fifth-week months. Over the years the Big 2 thought up a lot of different ways to justify annuals’ existence, from ginned-up “important” character debuts to nineteen-part crossovers nobody asked for, but in all honesty this issue in particular proves a pretty simple truism: all they really need to do is tell a good story.

Aquaman Annual #2 is, on the surface at least, a deceptively simple story. But there’s a heckuva lot more going on beneath that surface: themes of trust abound, as well as acceptance and forgiveness. It’s not been easy for the old gods to adjust to the fact that they’re not quite such not spit anymore and aren’t worshipped or even treated with any real level of deference, and DeConnick and Ayala use both humor and poignancy to effectively communicate how lost they feel in this strange new world.

It certainly helps that DeConnick has created characters who are so completely likeable. Atabey steals every scene she’s in, but it’s Loc who proves to be the beating heart of the story. In DeConnick’s hands, he’s vulnerable and full of more humanity than most human characters, and as if to prove that point, the issue’s sole antagonist is a Type-A thyroid case who hilariously thinks it’s a good idea to call himself Sea Daddy. And lest readers think he’s thrown in just for laughs, he proves consequential to the story and is an apt metaphor for human fallibility.

Then, of course, there’s Aquaman’s search for his dog Salty, which provides far more emotional grist for the mill than it has any right to. Who knew the former king of Atlantis had such a soft spot for his canine companion? That’s the hook DeConnick uses to trick readers into her deeper, loftier game – after all, what kind of monster wouldn’t want to see the lost dog returned home? – and it works like an absolute charm.

The art by Victor Ibanez and colorist Jay David Ramos suits this story perfectly. It’s soft and humanistic, conveying emotion that radiates in waves throughout. Ibanez’s blocking is pitch perfect too, as well as his body language. This is an artist primed for the big time!

Aquaman Annual #2 proves to be a special kind of rarity: a quietly near-perfect comic that defies expectations and flies completely under the radar. You don't need to be an Aquaman fan to thoroughly enjoy this comic. You just have to be literate.

Aquaman Annual #2: Save the Dog!