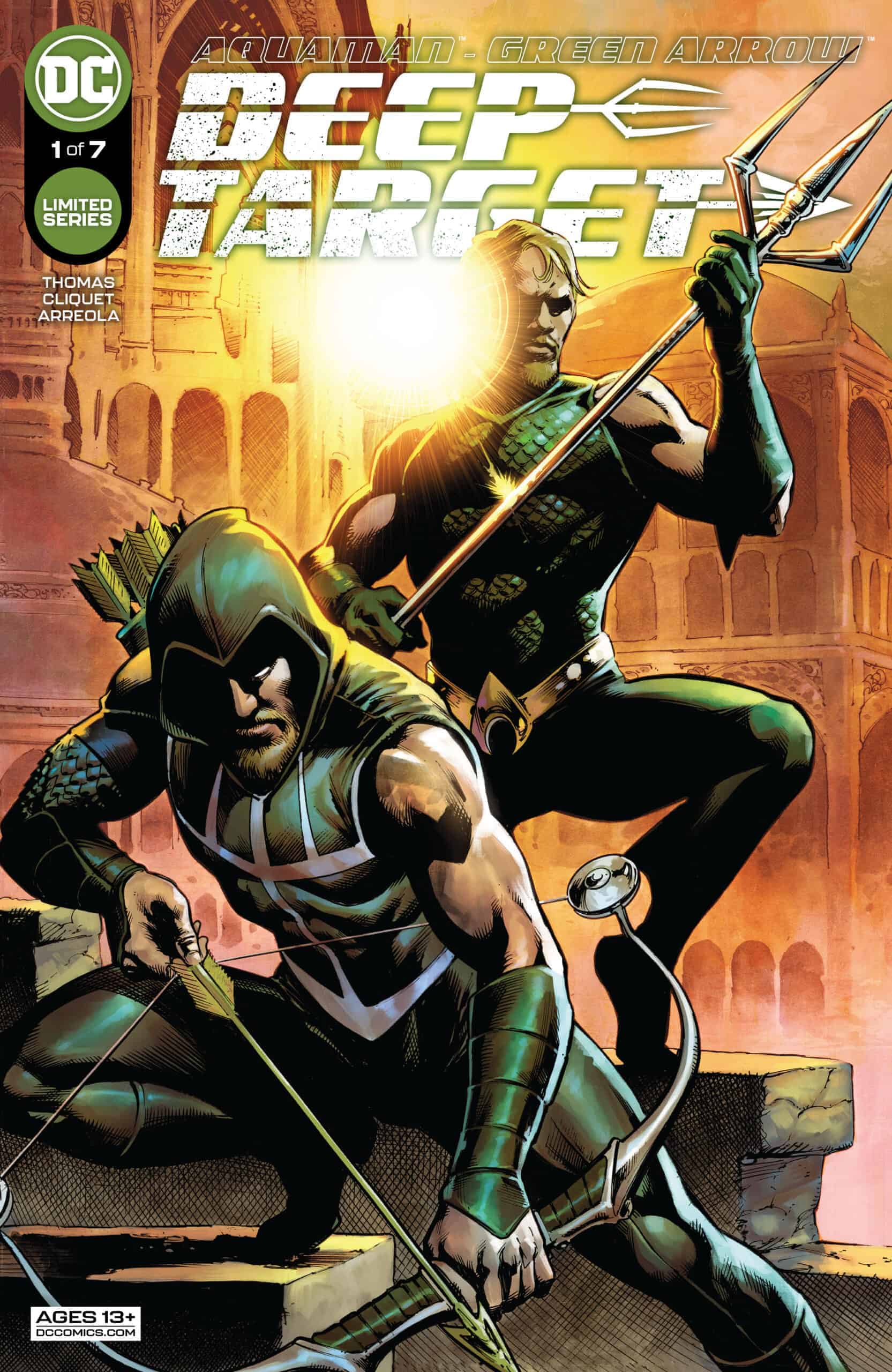 Odd couple pairings are one of the most endearing tropes in all of fiction. It’s the same foundation that makes a crossover exciting in comics. Two characters that don’t always exist in the same genre or feel of two worlds, having to adapt to the other’s methods and problems, is a great way to examine what makes a character tick, and how to help the character grow or change. Getting to see two completely separate personalities bounce off one another, to challenge one another is a special kind of alchemy that can improve even the most meh of plots.

It’s a shame that even with that special brand of magic that Aquaman/Green Arrow – Deep Target #1 can’t shake an uninteresting first issue. The book spends most of its page count setting up the series villain, and his machinations with some sort of time machine in the vein of Doctor Doom’s time platform. It then takes a shift two years into the future and watches as the audience is led to believe Green Arrow sneaks into Atlantis. The twist of the book is somehow Oliver Queen and Arthur Curry have traded places, with the marksman sitting on the throne of Atlantis, while the monarch is dressing like Robin Hood and feebly shooting arrows at foes.

Writer Brandon Thomas’ script is pretty by the numbers, setting up the book’s antagonist, revealing the reality swapped twist, and then cutting back to the villain’s plans. It’s clear that the General is somehow behind the heroes’ change in history, but there’s no clear motivation as to why they need to be in each other’s roles. That fact highlights the largest issue of the book, which is what the specific motivations of each character are. Both Green Arrow and Aquaman feel one-dimensional, with no clear motivation other than wanting to return to their status quos. The scene between the two just feels like two action figures arguing with one another, neither feeling in any type of character or interpretation. It’s very one-note, and a waste of a fascinating premise. Just thinking about the social conscience Oliver Queen getting thrown into the role of the monarch of a scientifically advanced but monarchic society is an excellent set-up that is wasted by the issue’s script.

It’s a shame that Deep Target’s script is so bland because Ronan Cliquet’s art and Ulises Arreola’s colors are mostly phenomenal. The art is consistent, moving from the underwater cityscapes of Atlantis to forests bustling with dinosaurs and other prehistoric creatures. There’s a couple of places where the art dips in quality, mostly in the early action scenes, but quickly regains its footing as the fight between the amateurish archer Curry and the newly powered up Queen. It’s not a surprise that Arreola’s colors put greens and blues into focus, and that use of color makes even those weaker points pop. The art and color blend and make the other character stand apart, even when the words on the page make them feel like hollow versions of two prominent characters.

Aquaman/Green Arrow - Deep Target #1 feels like a book for nobody, with inconsistent and bland characters, but wonderfully rendering settings and vibrant colors. Hopefully in the next issue, with the premise and set-up out of the way, Thomas can dig into the characters of Oliver Queen and Arthur Curry, and reveal why this is a pairing the audience should care about.