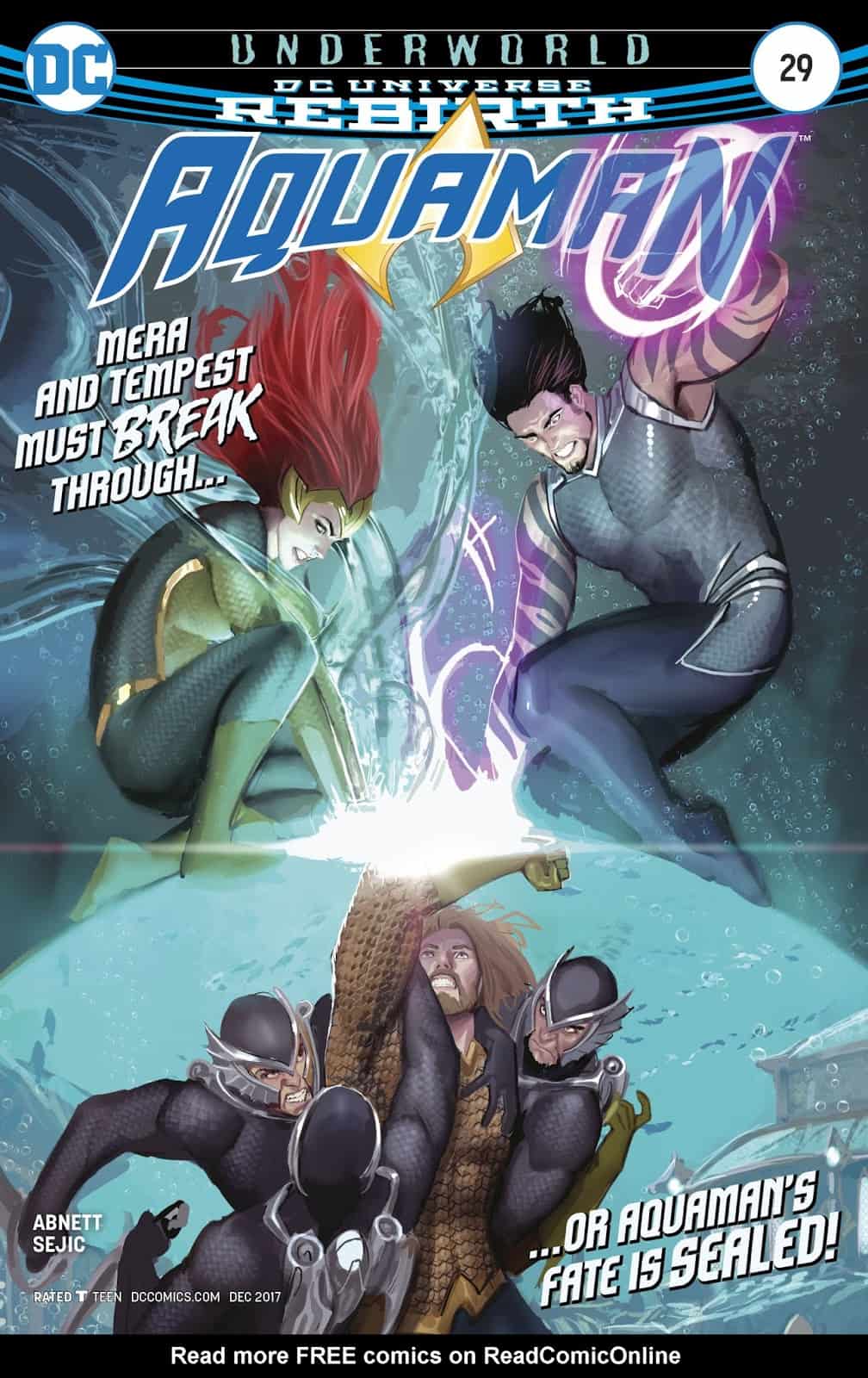 Trapped in the city of Atlantis by the Crown of Thorns, Aquaman and Dolphin are in hiding, having narrowly escaped the sorcerer Kadaver. However knowledge of Arthur’s return has been discovered by the monstrous Lord Krush who threatens to reveal Arthur’s survival to the usurper of the Atlantean Throne, Corum Rath.  Meanwhile on the outside of the Crown of Thorns Mera and  Tempest work to bring down the barrier that separates  Atlantis and Arthur from the outside world though King Rath has a dispatched Atlantis’ most powerful sorcerers to end their attempt to breach the magic’s of the Crown… permanently.

Balancing two lives is far from a uncommon phenomenon amongst superheroes however Aquaman differs from the majority of heroes in two ways, he is torn between defending both the surface world as well as Atlantis and the oceans, and then he is further torn between upholding the traditions of the isolated Atlantis and attempting to integrate them with the surface world.  This Aquaman, however, has seemingly lost both his battles, having relations between Atlantis and the surface break down entirely as well as being overthrown by Corum Rath who epitomizes the sentiment of many Atlanteans, who wish to remain separate from the wider world.  Believed to be dead by the Atlantean throne this Aquaman has all but given up on leading the Atlantean people, instead of existing as a vigilante, defending the outcasts that inhabit the slums of the Ninth Tride, while attempting to keep his survival secret from the ruling Atlantean powers.

As a direct continuation from the previous #28 this issue open with Arthur and Dolphin in hiding in the slums of the Ninth Tride, where Arthur further expands on why he has given up on trying to take back the Atlantean throne and end Corum Rath’s tyranny, believing that because Atlantis doesn’t see him as a good king, if he were to reclaim the throne he would eventually be faced with another coup.  Despite being mute Dolphin uses her bioluminescent powers to communicate with Arthur, drawing the emblems of the Aquaman and the DC Trinity, as well as a crown over Superman’s crest. Aquaman corrects her saying that Superman is not a ruler, he simply saves people. This is a point of realization for Arthur where he realizes that he shouldn’t feel that he has to overthrow Corum Rath’s regime and then take his place on the throne but simply be the hero that saves Atlantis. This realization prompts a change of heart in Arthur, no longer willing to be some sort of aquatic vigilante and ready to save Atlantis from a tyrant. 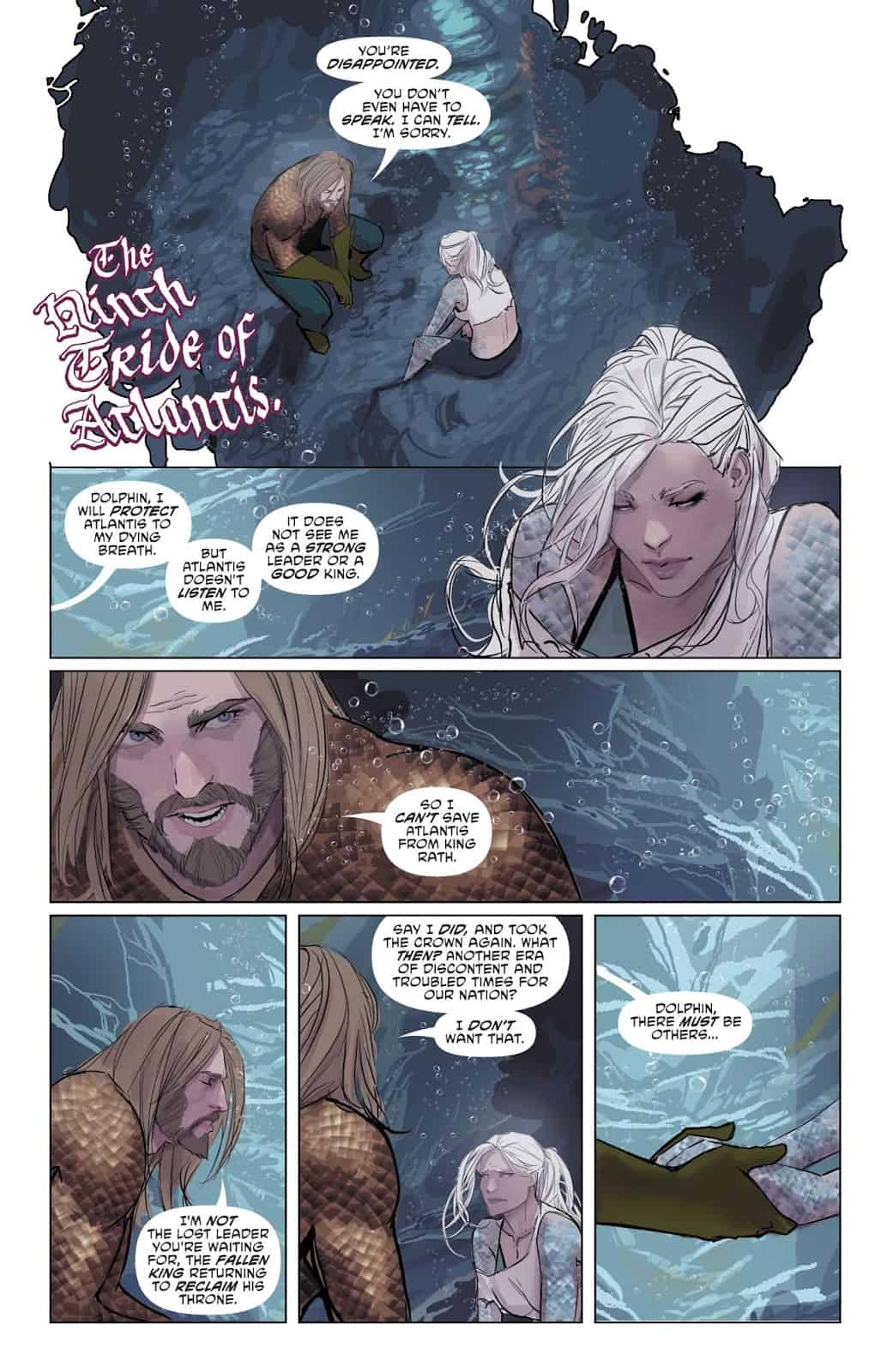 This flows into the threat of imminent death that former Royal Atlantean advisor, Vulko and his ally Ondine face while trying to infiltrate the catacombs of Atlantis in search of an artifact capable of bringing down the Crown of Thorns. In the last issue Vulko explained how the treasury that lies in the depths of the catacombs is guarded by the shades of Atlantean elders, in order to pass each ghost unharmed Vulko must call each shade by its name, a reasonably easy feat for the Atlantean historian who recognizes each elder, however the closer to the treasury Ondine and Vulko get the older and more rotted the ghosts become and finally Vulko is faced with a ghost with no face and the duo are forced to flee while Vulko spits out names at random trying to guess who the ghost. Of course, he does eventually guess the right name but only at the last minute when he and Ondine are cornered by the spectre.  Once named the spectre of Elder Null becomes a surprise ally to the duo leading them to the treasury in exchange for essentially Atlantean gossip. Null departs once the treasury is reached and Vulko and Ondine are left gazing at a trident impaled in a dais… 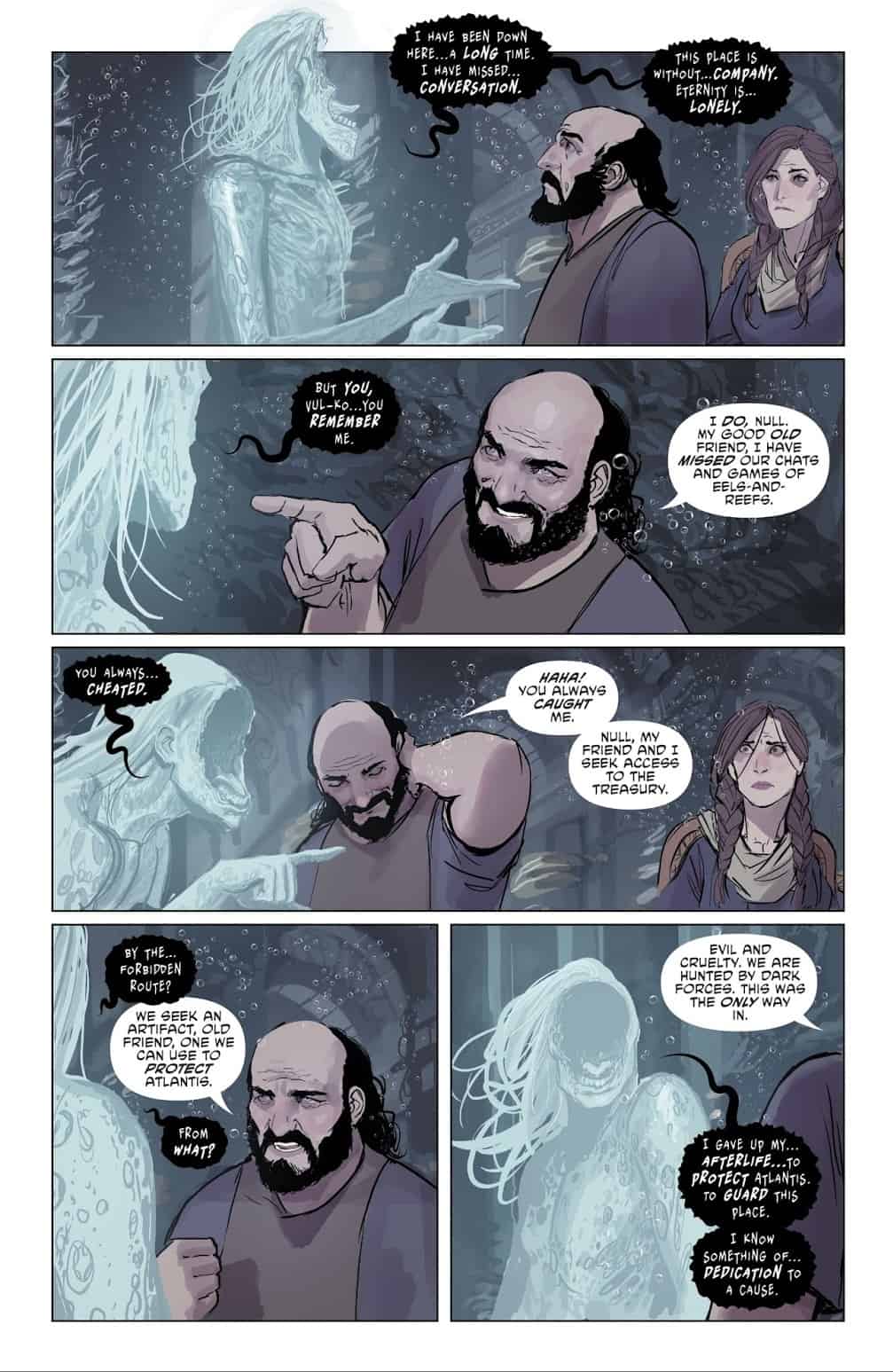 The focus then shifts to Mera and Tempest who are confronted by the sorcerers of the Silent School, led by Loke. Garth is an old student of Silent School who turned his back on magic after the accidental death of one of his fellow students, however, he still manages to hold his own against the sorcerers and steal the amulet that allows Loke to bypass the magic barrier trapping Atlantis.  Loke and his other sorcerers quickly regain their advantage and Mera and Garth are forced to hide. While hiding Garth explains why he left the Silent School and turned his back on magic, also revealing that he stole Loke’s amulet. Garth then gives it to Mera to allow her to enter Atlantis while he draws Loke and his fellow sorcerers away from the barrier. Because of damage that the amulet had sustained Mera cautiously tests the barrier though it seemingly opens for her. Watch out Atlantis Mera is coming for her husband. 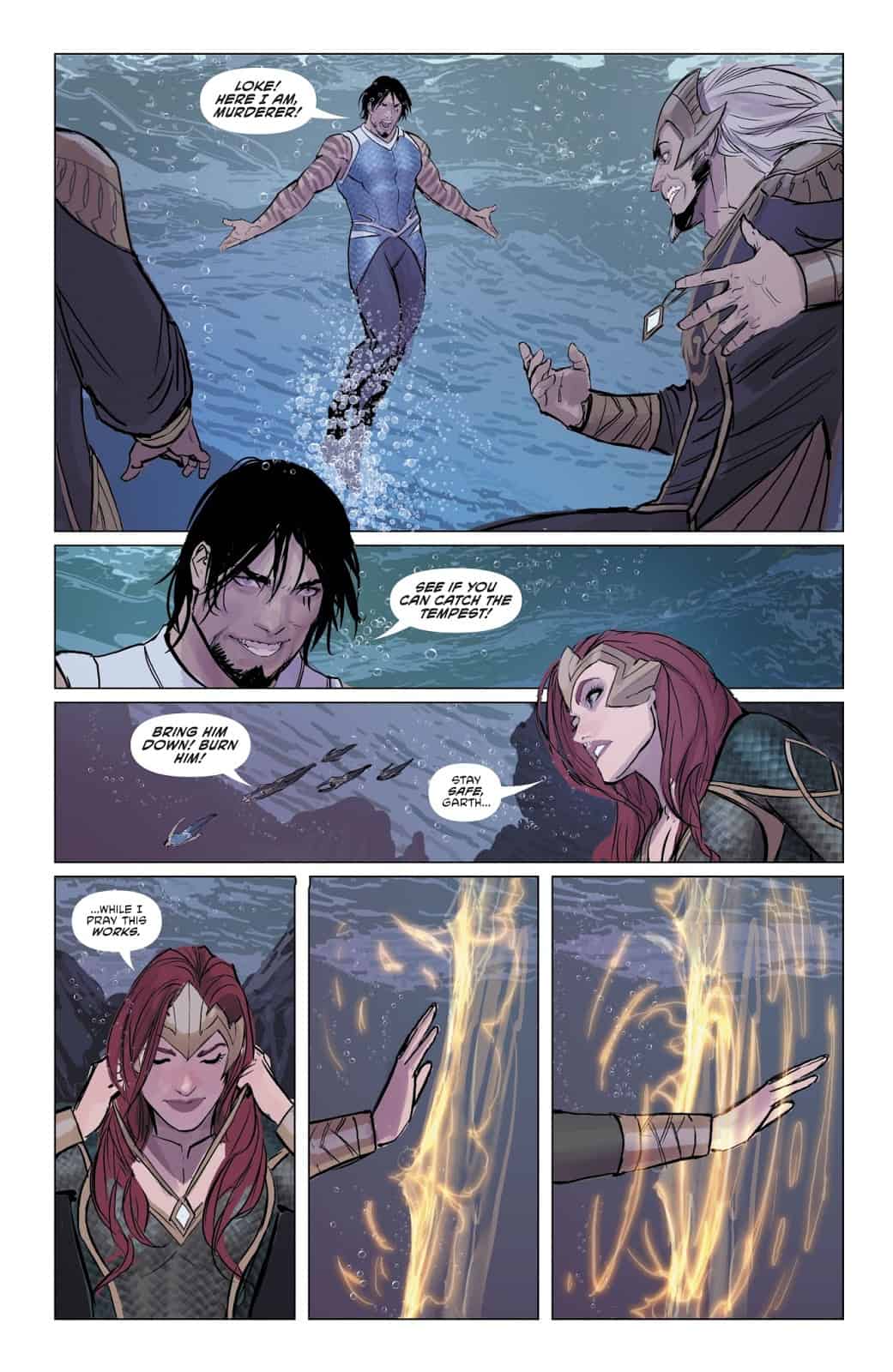 The issue closes with Murk, who seemingly betrayed and nearly killed Aquaman during Corum Rath’s coup encountering the crab-like Lord Krush of the Ninth Tride, where Arthur had been hiding. Krush knew of Aquaman’s survival and aimed to use this knowledge as a bargaining chip with Corum Rath to protect Crime Empire that he had built for himself. Murk demands to know why the monstrous Krush has ventured to the Royal Palace and Krush reveals that he has information for Corum Rath. Upon revealing Arthur’s survival to Murk, Krush is shocked when Murk reveals that he is aware of his survival. Krush’s shock is short lived as Murk lunges forward and impales Krush stating that Aquaman’s survival must remain a secret, Murk the traitor? 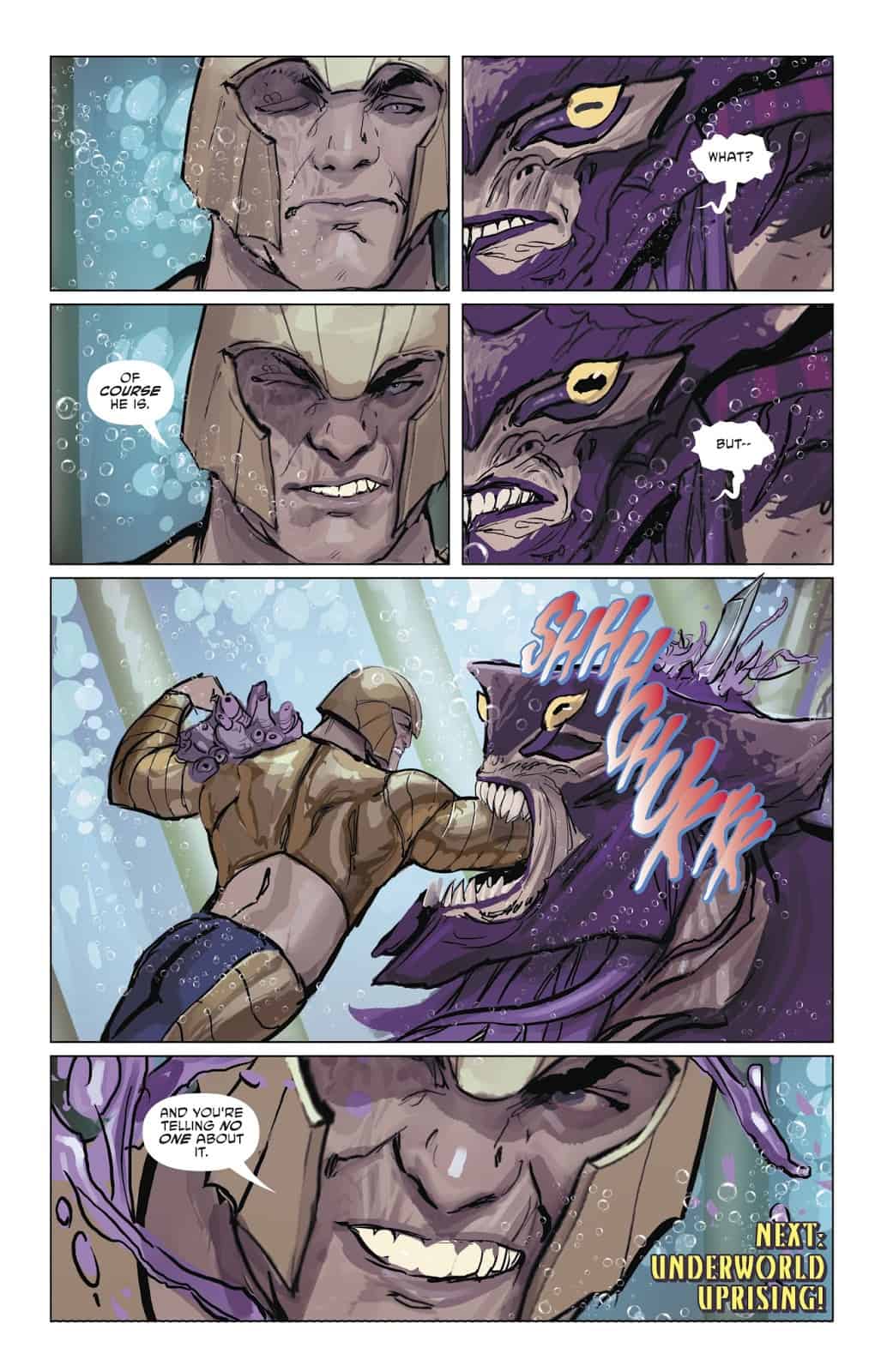 This arc has centered on Arthur’s repeated failures to bring Atlantis and the surface world closer together and end the xenophobia between the two resulting in him being overthrown by a group of Atlantean nationalists. The general swing of the arc has Arthur resigned from actively attempting to take the throne and living as a vigilante, protecting the social outcasts of the Ninth Tride.

The arc has integrated the many of the newer and background Aquaman characters such as Murk, Vulko and Dolphin really well into the narrative with each playing different but equally important roles in what is leading up to the finale of the Underworld story arc. This arc has been really well written, of course, there are a few things that I thought could have been done better.

Murk’s characterization is something that I think could have been done a little bit better. Murk’s betrayal and the excuse that he serves Atlantis, not Arthur carried little weight for me as despite his initial dislike of Arthur and the surface; his attitudes can be seen changing in both the New 52 Aquaman book and during the Rebirth book to the extent where I would have considered him a friend and ally of Arthurs. To revert him back to a character similar to his first appearances seems a little out of the blue and while there have been suggestions that he is seemingly not as loyal to Corum Rath as he appears and it  I think this issue does well in solidifying his loyalty to Arthur.

The return of Dolphin as a character has been really interesting. The writing has been really strong at making her a character that exists in the now rather than fleshing out her origins. I think the most clever part of Abnett’s writing is that her inability to speak almost gives the impression that she is child-like and doesn’t have a strong understanding of the situation that Arthur and Atlantis faces, however, this issue instead reveals that she is both intelligent and insightful, providing perspective on Aquaman situation that encourages him to be a hero for Atlantis. In addition, the inclusion of bioluminescence as part of her power gives Sejic a chance to showcase some really cool art, her drawing the Superman crest with the crown is probably one of my favorite panels in this book.  It will be interesting to see how Dolphin is further developed at the conclusion of this arc.

The Vulko arc is written very well and acts as a sort of comic relief compared to the rest of the book. Seeing Vulko converse with a faceless corpse brings a slightly lighter tone while retaining the momentum of Vulko and Ondine’s mission to find a weapon capable of bringing down the Crown of Thorns. The writing did not add more humor than was naturally created by the situation which gave the reader a little bit of a break in what is otherwise a reasonably serious issue

I wasn’t a big fan of how quickly Mera was taken out of the fight by Loke and his sorcerers but I do understand that it was to showcase Tempests powers in a combat situation and I think it was the right decision to make. Sejic’s art style really suits Garth’s energy bolts and force fields much better than it suits some of Arthur’s physical combat scenes. The dialogue between Mera and Garth is really strong and Garth’s reason for avoiding Atlantis and renouncing magic helps link a version of Garth who we’ve only really seen in the current Titans run, into the Aquaman mythos. Despite it being a common feature of a lot of Aquaman arcs, Mera’s devotion to Arthur doesn’t feel overused and I think that this particular arc has helped showcase the immensity of her powers. I’m also enjoying how she’s taken Arthurs place on the Justice League and I hope they give her a little more development in that book before Arthur’s inevitable return.

Overall this issue provides a really strong lead up to what I’m hoping is an explosive conclusion to this arc. Sejic’s art is visually distinct and really well done however it’s almost painting like style does feel a little static in some of the combat scenes. Abnett’s writing is also really strong and I think he has managed to flesh out and add depth to the new versions of characters like Garth and Dolphin. My only issue with the writing is that certain tropes appear pretty consistently in Aquaman series with Arthur being overthrown being pretty common. This current story arc does give me a sense of déjà vu to the 2003 Aquaman run, as well as the Dead King arc in Geoff Johns run (which occurred around the same numbering as this). I think this is definitely an arc that is as well written and executed as those arcs and I think it retains enough differences from these earlier arcs to be a strong story on its own but established readers will definitely notice the similarities.

Final Thought:  As a solo issue this is a very strong chapter in the Underworld story arc, beginning the process of tying all the various factions and plot threads together in the lead up to the penultimate and final chapters of the arc, The art style is visually enjoyable to read and the writing manages to make character dialogue feel natural. Main criticisms only really fall on the Underworld story arc as a whole. Definitely looking forward to seeing how Abnett concludes this arc. Given that Arthur doesn’t seem that keen on ruling again, Aquaman’s future and the future of Atlantis is shaping up to be really interesting