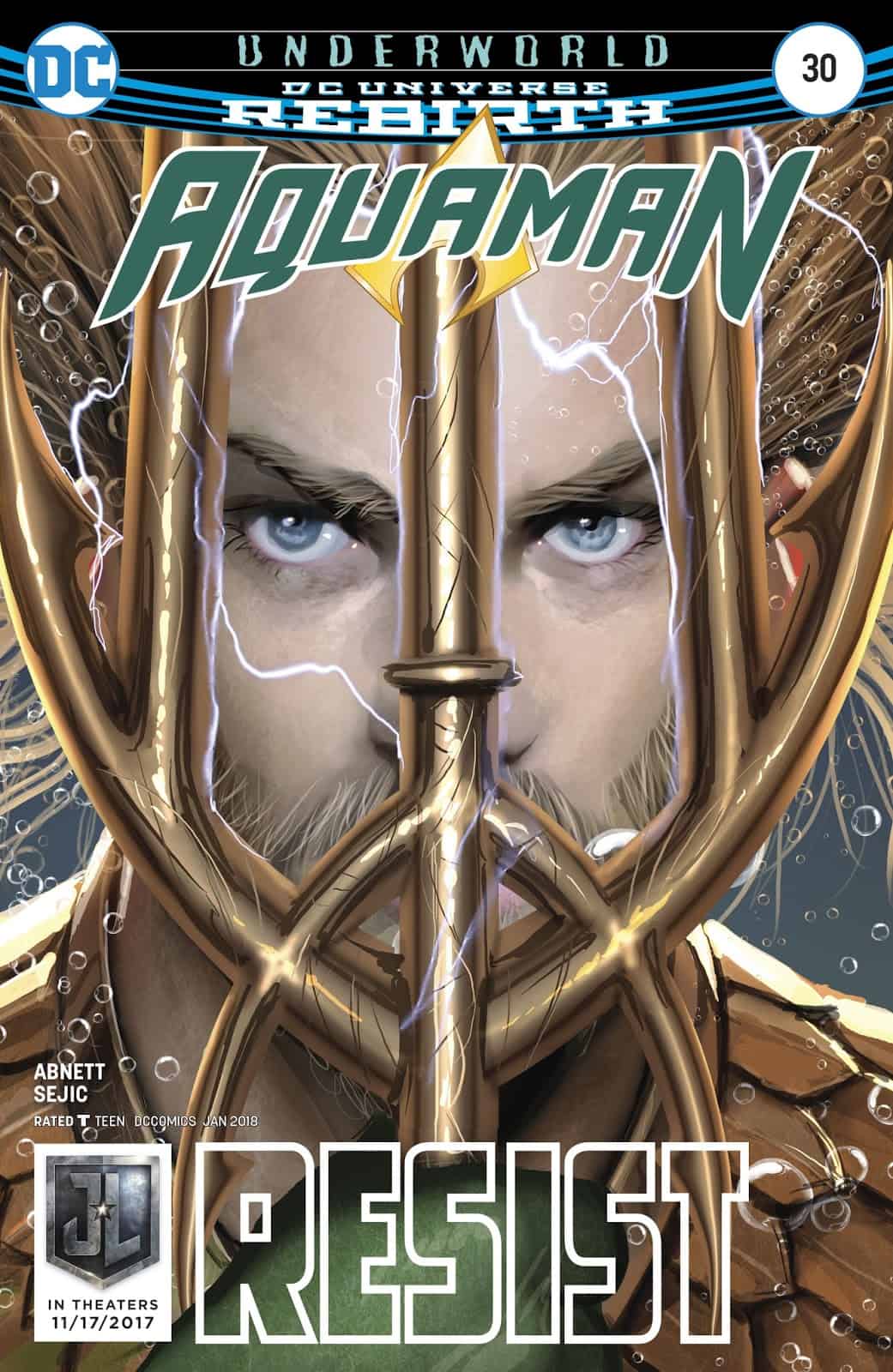 The Aquaman is in hiding no longer! Despite his belief that he is no longer fit to rule Atlantis, Dolphin convinces Arthur to simply be it’s hero and liberator. It also seems as if Corum Rath’s rule is not so widely accepted by all Atlanteans with a rebel movement steadily growing, looking for the right person to lead the charge against the tyrannical regime, a regime that is once again planning to annihilate the surface world. Amidst all this Mera has breached the barrier surrounding Atlantis intent on finding her husband, however the magicks used to allow her to pass through appear to have had a deadly side-effect…

What You Need to Know:
This issue is the finale of the Underworld story arc that has run over the past 5 issues. The Underworld arc is part of an ongoing story which has seen a group of Atlantean nationalists, who see the progressive changes that Arthur Curry is making to Atlantis as betraying its traditions and power, seize control of the Throne and leave Curry for dead. Underworld has focused on Arthur acting not as a king attempting to reclaim his throne but instead as a vigilante, protecting those persecuted by Corum Rath and the new rulers of Atlantis. The last issue saw Aquaman’s new ally Dolphin convince Arthur to come out of hiding and become the liberator that Atlantis needs. In addition to this Arthur’s allies are gathering. Vulko has stolen back Arthur’s trident, Mera breached the Crown of Thorns that surrounds Atlantis and Murk, who seemingly betrayed Arthur has revealed himself as an ally, preventing news of Aquaman’s survival from reaching Corum Rath.

There are three main story arcs in this issue. Each one runs separately from the others. The issue opens with the Undercurrent, a rebel movement led by former Atlantean Elder, the Beastmaster, Jurok Byss launching an attack on a royal armory. The attack is initially successful with Jurok’s two mosasaurs making short work of the guards. However, the tides turn when the royal forces of the Drift unleash a much larger Mosasaur against the rebels. Byss attempts to use his control staff to calm the enraged creature to no avail and is only saved from the sea monsters jaws by Aquaman’s last minute intervention. 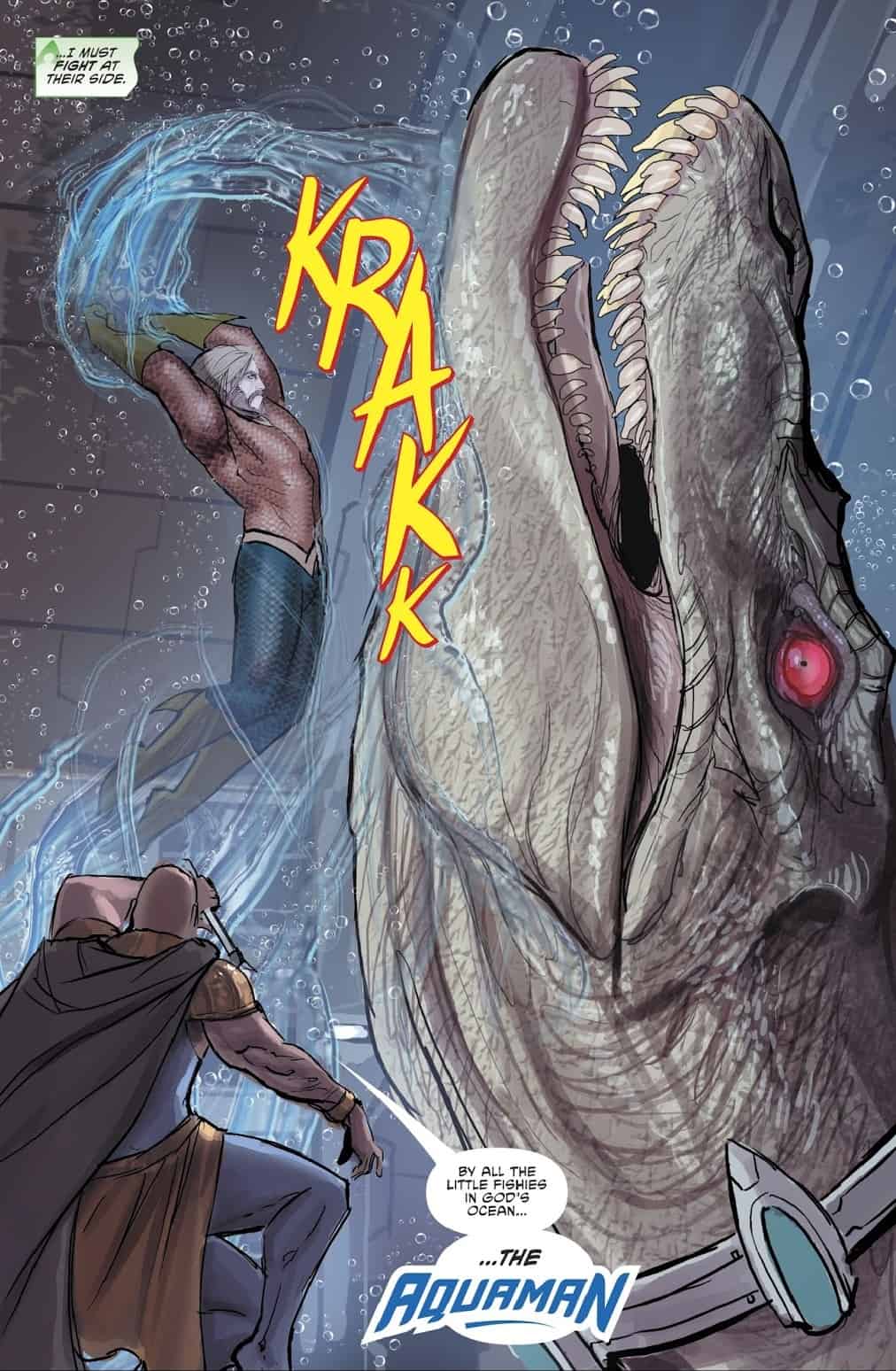 Arthur battles the deadly sea beast though he also attempts to reach out with his telepathy and control it however he realizes that the creature has been driven mad and is forced to kill it. However, the clash with the monster gives the Royal forces a chance to regroup and they charge the rebel group. As they surround the rebels Dolphin intervenes, using her bioluminescence to blind the guards allowing Arthur, Byss, and the others to escape.

The second arc revolves around Mera and her mission to find Arthur. It opens in Amnesty Bay with Garth, who helped Mera breach the barrier in the last issue, and Tula, discussing the plight of Atlantis. They reveal that Garth was able to escape Magister Loke in the previous issue because Atlantis does not want to appear weak to the surface world. They also reveal that Mera has forbidden the Justice League or any other surface hero from attempting to free Atlantis because she believes that Atlantis must save itself. While the two discuss Mera breaching the Crown of Thorns, Garth confides to Tula that the amulet he stole from Loke that allows passage through the barrier was damaged and that it could cost Mera her life. This then cuts to Mera breaking through the barrier surrounding Atlantis much to the surprise of some Atlantean civilians. However, her joy is short-lived as she suddenly collapses and begins to choke, seemingly having lost her ability to breathe underwater. The civilians crowd around her trying to decide what to do as a hooded figure suggests taking her to the king. 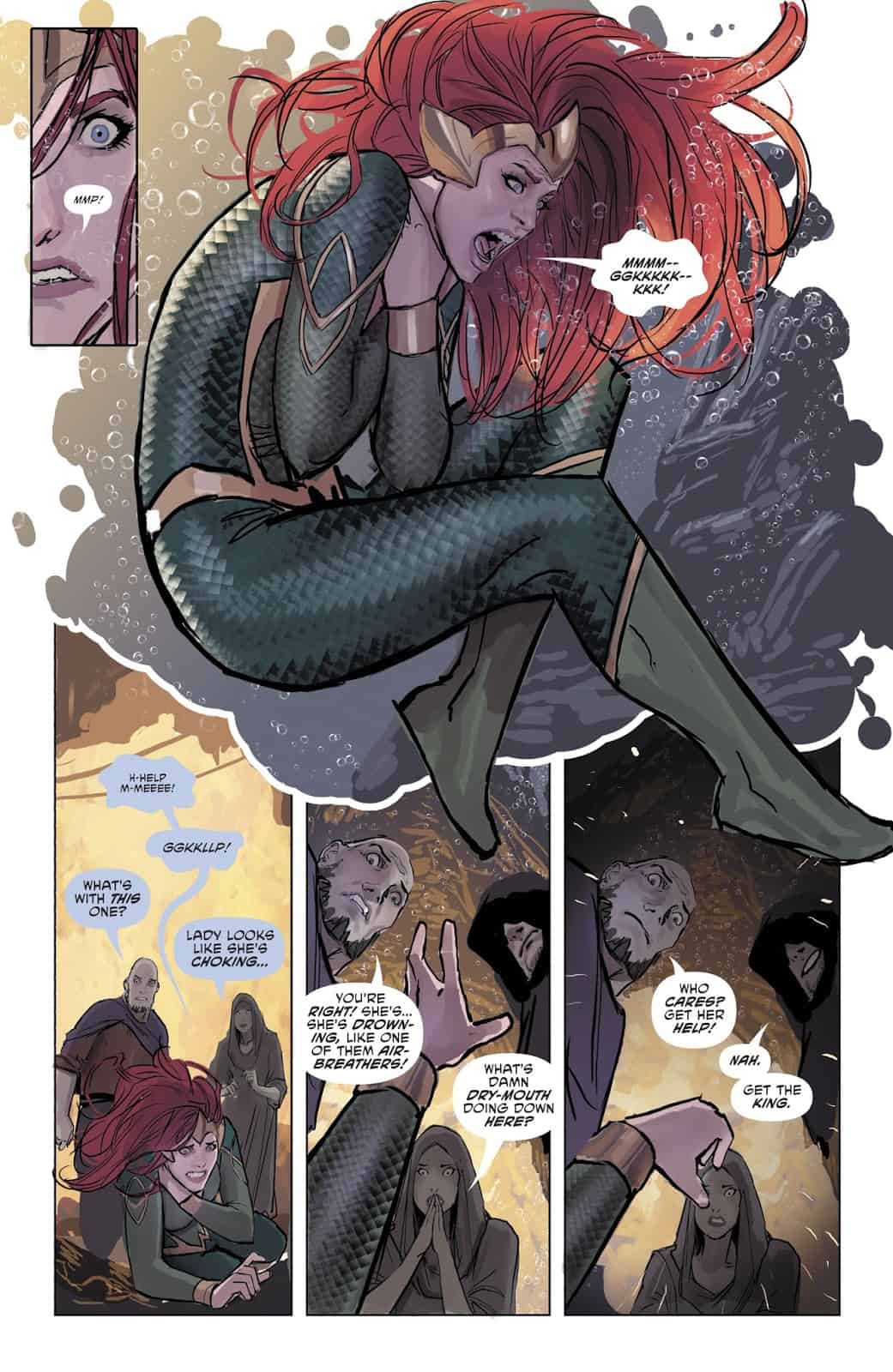 This then leads to the same hooded Atlantean bringing news of Mera’s capture to the mysterious King of the Ninth Tride. The Atlantean, who is revealed to be named Kreen, reports that the previous ruler of the Ninth Tride, Krush, has disappeared and that the numerous gangs that exist in the Tride are warring against each other for control. The mysterious figure is then revealed to be none other than King Shark looking to seize power in Atlantis, with Mera being a powerful tool for doing so… 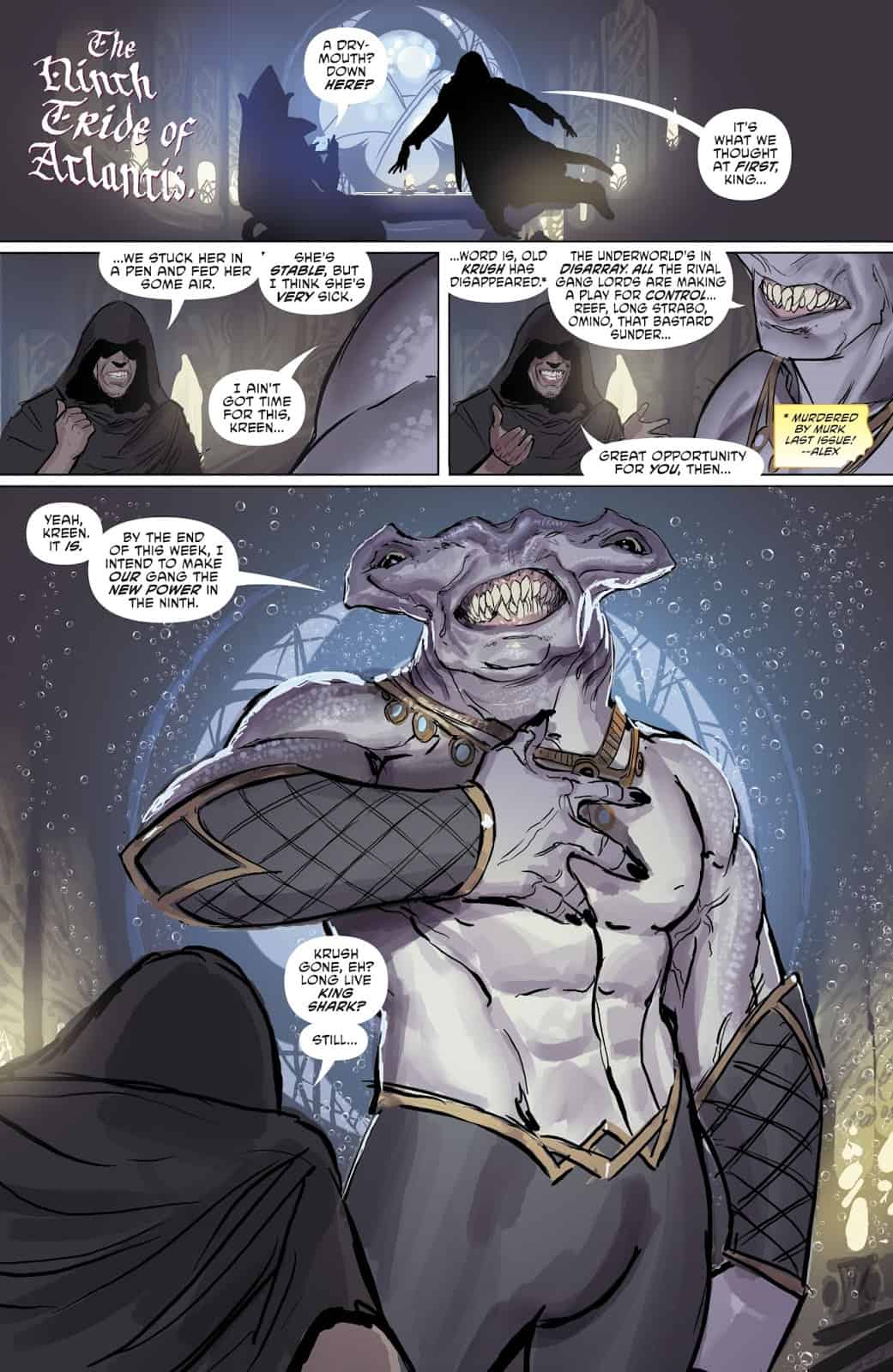 The third arc revolves around Corum Rath, the tyrant who overthrew Arthur. Taking place after the Undercurrent has escaped from the Third Tride, Rath comes to realize that his reign is threatened by enemies from all around him. With the news that the mysterious Aquaman, whom Rath believes to be an Atlantean posing as Arthur Curry, has joined the rebellion, he enters a rage, declaring that all who oppose his reign must be crushed among them the Undercurrent, Mera’s home of Xebel, the Mutants of the Ninth Tride and the Surface world. Commander of the Drift, Urcell attempts to interject, claiming that a war with the surface would decimate Atlantis, however, Rath shuts her down asking if she is disobeying his decree. Urcell manages to claim that she isn’t but she is very much shaken by the madness that Rath appears to be displaying. 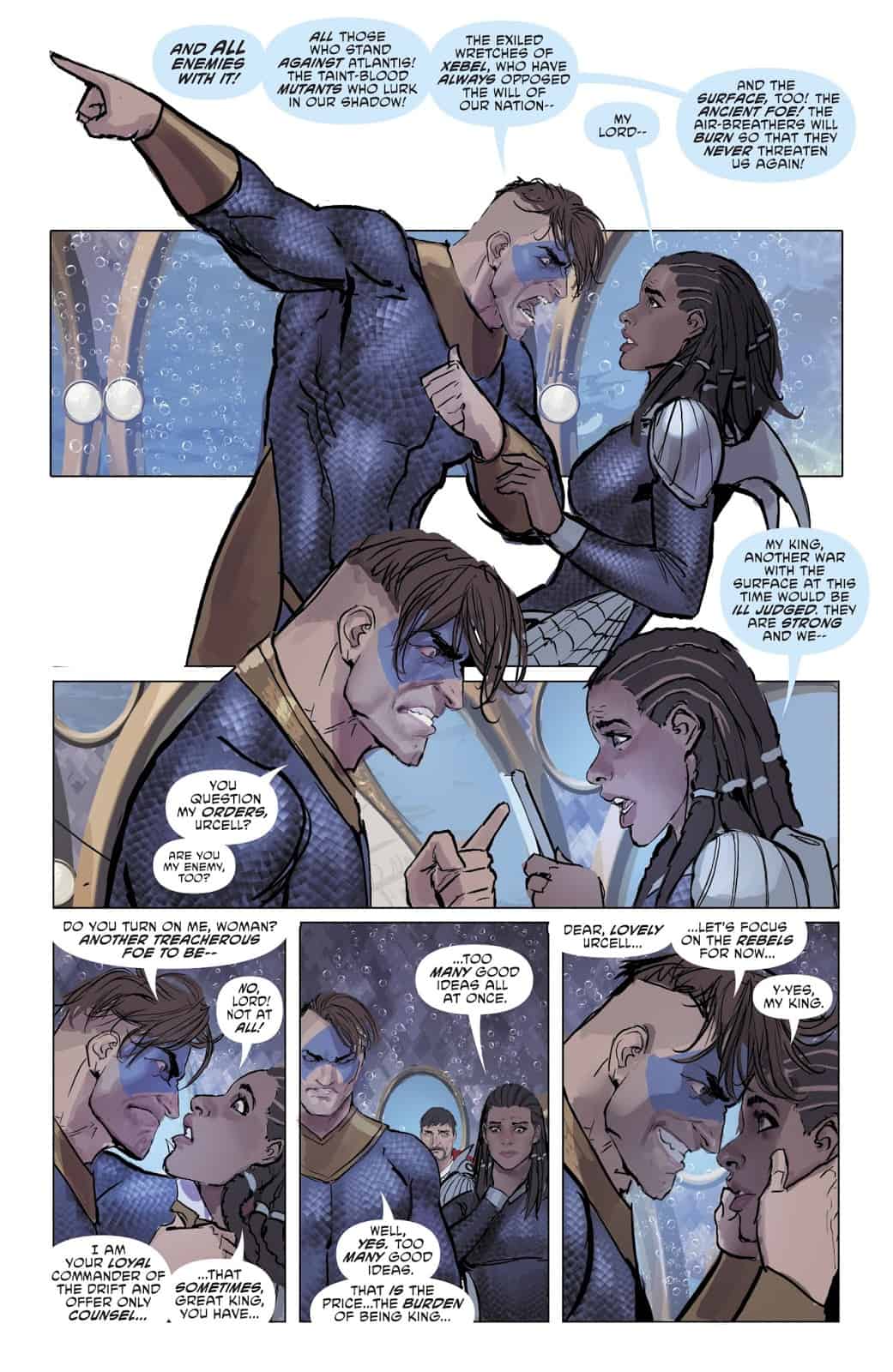 The issue concludes with Arthur, Dolphin, and Byss joining up with the rest of the Undercurrent rebels. Jurok Byss presents Arthur to the rebels as a figurehead to lead the rebellion and give the Atlanteans someone to rally to. Some of the rebels take issue with the “Aquaman” not realizing that he is, in fact, the former king. The foremost critic is the former advisor Vulko. Arthur and Vulko engage in a brief verbal sparring match before Ondine stops them and returns the conversation to discuss who will lead the Undercurrent. Ondine hands Arthur an item wrapped in cloth while Vulko asks Arthur if he is willing to lead the rebellion against Corum Rath. The final panel reveals that the item was, in fact, Arthur’s Trident and he raises it and speaks two words. Atlantis Uprising! 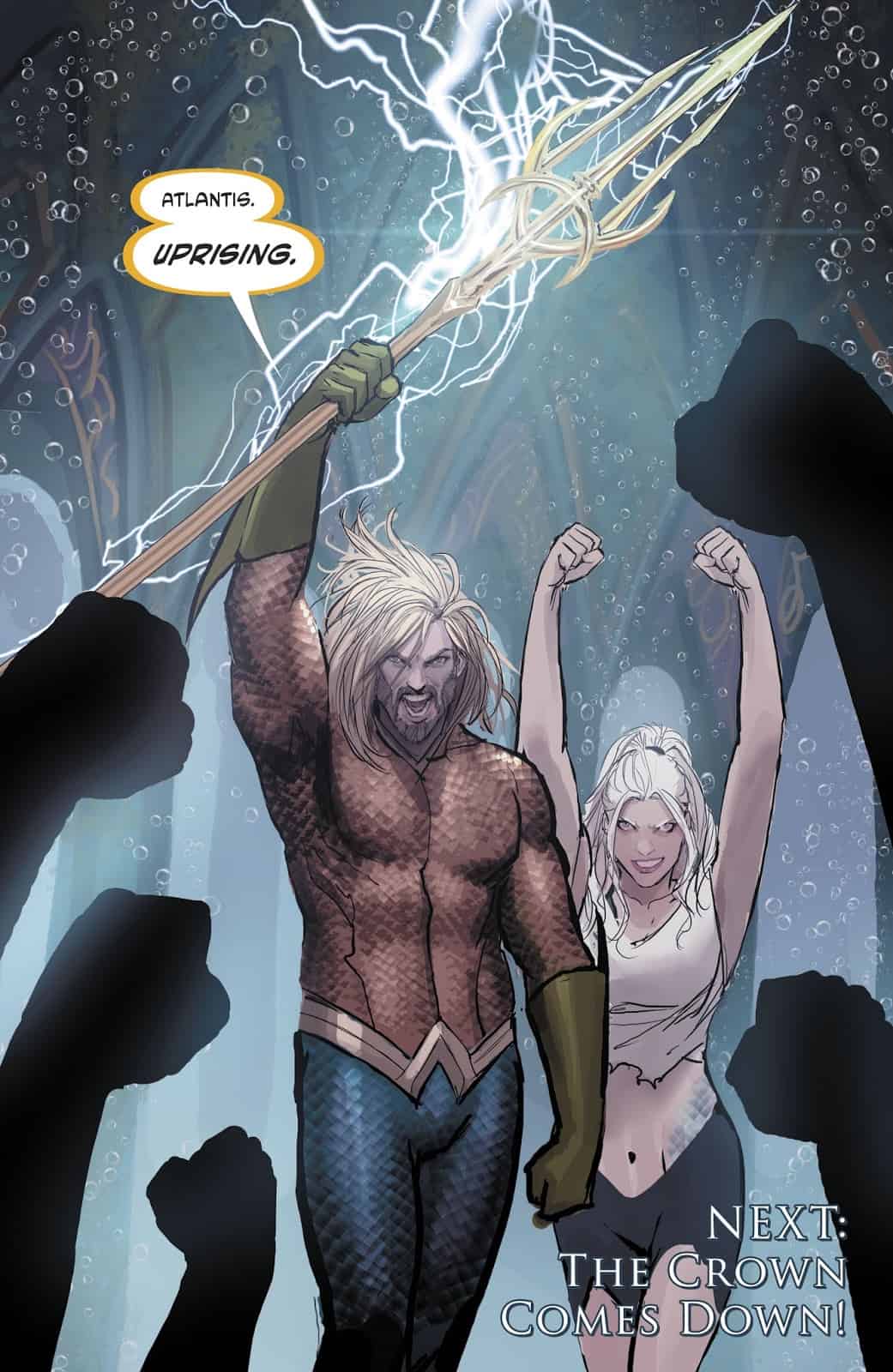 Similarly to the other issues in the Underworld arc, the story jumps between several different characters that usually references the other arcs within the book. However, unlike previous issues, I felt that the time spent on each arc was shorter and subsequently this felt like a shorter read. This isn’t necessarily a negative though. Because the book acts a bridge to the Take Back the Throne arc which is likely going to feature Arthur’s rebellion, King Shark’s bid for power and Mera’s inability to breath water. A shorter issue is able to set up the next arc without giving too much away which I thought worked really well.

Another thing I thought was great in this issue is how the remaining members of the Atlantean High Council are portrayed. Jurok Byss while disagreeing with Arthur and some of his decisions earlier in the series, was also shown to be able to work well with Arthur and it’s abundantly clear that his view on Corum Rath has changed.  How Byss has been portrayed suggests that while he disagrees with Arthur there is still a great deal of respect that Byss has for him and by putting him as the initial leader of the Undercurrent shows his loyalty to Atlantis. The result of this is that we see one of the individuals who stripped Arthur of the Throne realizing that such a decision was a mistake and then working to correct that mistake. The other Atlantean who I thought was interesting was Commander Urcell. Urcell was never a supporter of Arthurs and I think this issue begins a transition to her becoming a supporter of the Undercurrent and betraying Corum Rath. Her realization that Rath is paranoid and power-mad is likely going to erode her loyalty to him and it’s going to be interesting to see what role she plays in Rath’s downfall.

Using a damaged amulet to cross the Crown of Thorns. I knew something bad was going to happen to Mera. I didn’t expect it to be that she lost her ability to breathe underwater. I think this could have been done a little better, however. I’m still wondering if her Hydrokinesis has also disappeared. I think having her come through the barrier and be placed in some immediate danger (being attacked by a small mosasaur for example) would have likely illustrated the extent of her power loss better.

King Shark’s appearance was something that I really liked about this book. I became a big fan of King Shark during the New 52 Suicide Squad and I’ve wanted him to appear in an Aquaman book ever since, until now, this hasn’t happened, bar a few cameo appearances. I’m really interested in seeing what they do with him. I can see him allying with both Corum Rath or the Undercurrent. Either way, I think he could be a tipping point in the arc and if not we’re at least shaping up for a great King Shark/Mera clash.

For Arthur, this issue concludes a brilliant character arc. We’ve seen him betrayed and left for dead, living as a vigilante, his struggle with the responsibility of saving and then ruling Atlantis. I think Abnett has made the right decision by diverging Arthur from the Atlantean throne. While it’s happened before, I think after two series being so focused on the Throne of Atlantis  and Arthur’s struggles as a king it’s time for Arthur to leave it behind at least for a little while and after this series arc finally comes to a close I’m greatly looking forward to what the future holds for Arthur and what direction the book will go in.

The conclusion of the issue is probably the standing point of the issue. Sejic’s art on the final page is amazing and I think throughout this issue it really stands out. My main criticism is again that I don’t think it works well for combat scenes. Style wise it feels a lot like a painting or a wall print which works well for more static scenes but doesn’t portray action in the same way. As much as I’ve loved Sejic’s art in this story, I think that a change in artist in the next arc is a good thing especially since it looks to portray more combat and battle scenes.

Final Thought: As the finale to Underworld this book nearly perfectly sets up the arcs that a soon to follow. It brings the Undercurrent rebellion to fruition, introduces King Shark as a new player and lays the foundations for Corum Rath’s tyrannical regime to fall. While this issue feels shorter than previous issues it concludes enough of the plot threads from the arc to satisfy a reader and leaves anticipation for what is hopefully going to be a killer arc.