Arkham City: The Order of the World #4: Old Haunts

Arkham City: The Order of the World #4 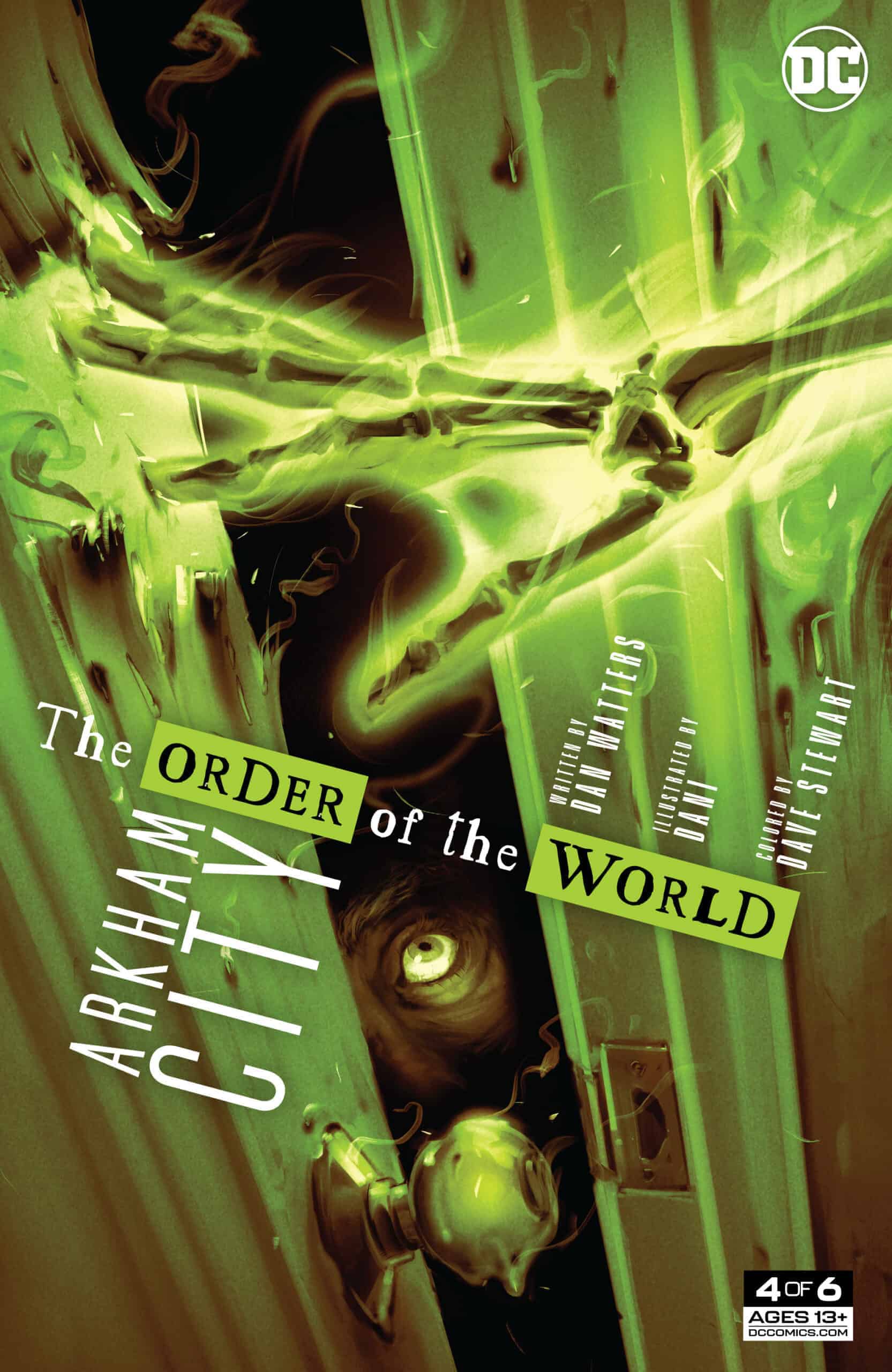 Dr. Joy is now face to face with the ghost of Amadeus Arkham-the ghost that she had assured all her patients did not exist. Now faced with overwhelming evidence that the Ten-Eyed Man’s “delusions” were anything but, she has found herself questioning everything. Meanwhile, Dr. Phosphorus and Nocturna attempt to live a “normal” life in Gotham, but the good doctor’s radioactive body may be having unforeseen side effects on their unsuspecting neighbors.

Now in its fourth installment, Arkham City: The Order of the World continues to be a captivating and disturbing comic about both Gotham and the mentally ill people it has (at best) neglected and (at worst) intentionally harmed. The previous issue explored Arkham’s history of abusive practices like lobotomy and putting patients on display for tourists to gawk at — mirroring real abuses experienced by mentally ill people in previous centuries. Now, Dan Watters’ narrative returns to more present dangers. As Arkham’s ghost haunts Dr. Joy and the asylum’s former occupants, Watters digs deeper into their search for normalcy. 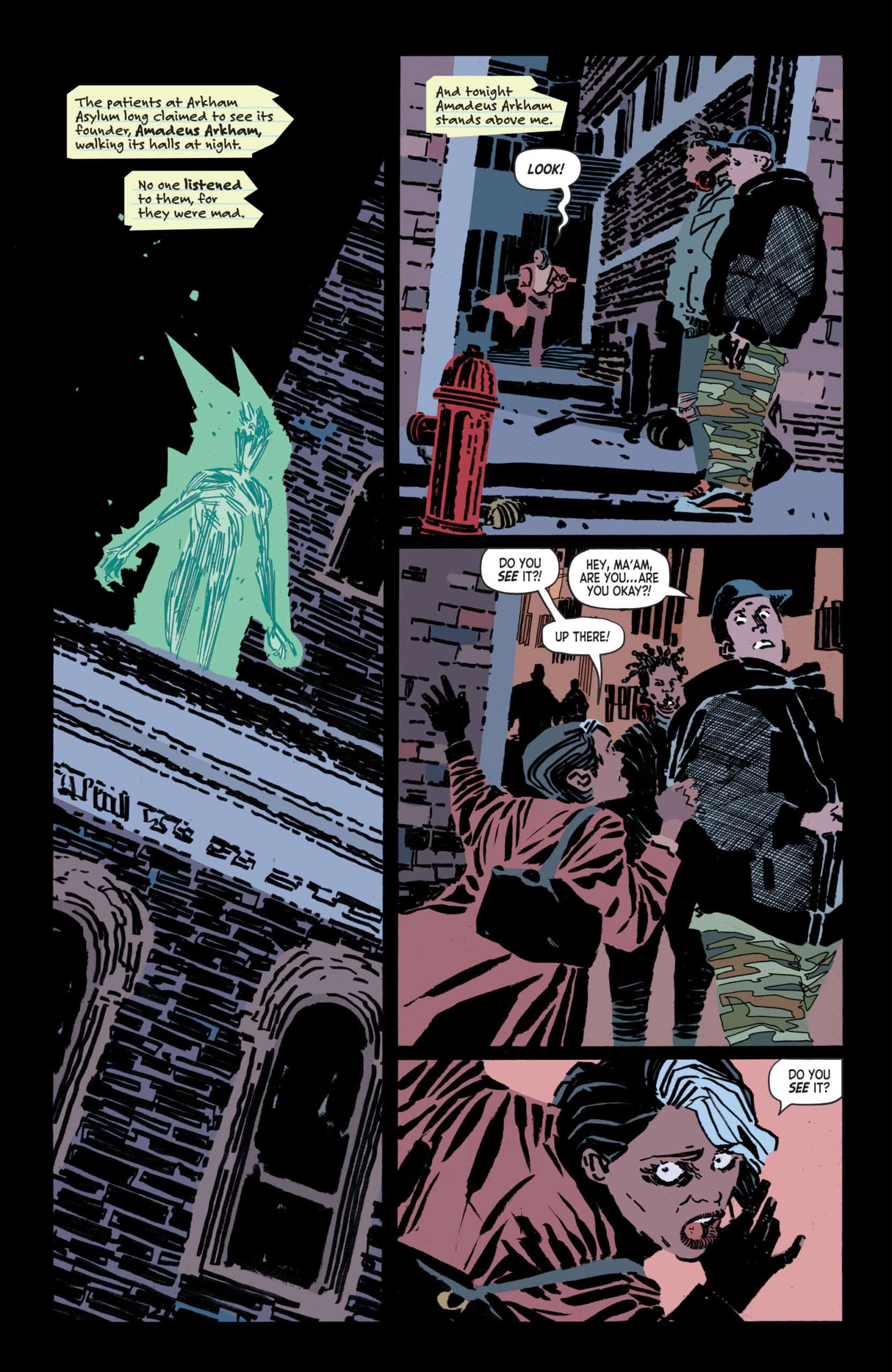 As the issue’s cover promises, it’s one of the comic’s more intimate issues, with most of Dr. Joy’s time spent with two of Arkham’s former patients: the radioactive Doctor Phosphorus and the vampiric Nocturna. Doctor Phosphorus and Nocturna live in an apartment together, repeatedly stressing to both Doctor Joy and their neighbors how they are normal people living a normal life in their normal apartment. However, their attempt at a “normal life” is dreadfully and heartbreakingly at odds with the harm they do while attempting to maintain it: the neighbors are dying of radiation poisoning from Doctor Phosphorus living nearby. And Nocturna, for her part, has eaten the neighbors’ dog. In this scenario, Dr. Joy, Doctor Phosphorus, Nocturna, and the neighbors dying on the floor all seem equally trapped in their own ways. However, while the comic builds sympathy for Gotham’s mentally ill characters and its narrative regularly points out prejudices mentally ill people face, it nonetheless perpetuates stigma towards mentally ill people through its continued depictions of mentally ill people as perpetrators of harm. As I’ve discussed in my previous review of this series, mentally ill people aren’t substantially more likely to do harm to others than non-mentally ill people and are in fact at greater risk of experiencing harm (due to factors like stigma and a lower capacity for self-defense. 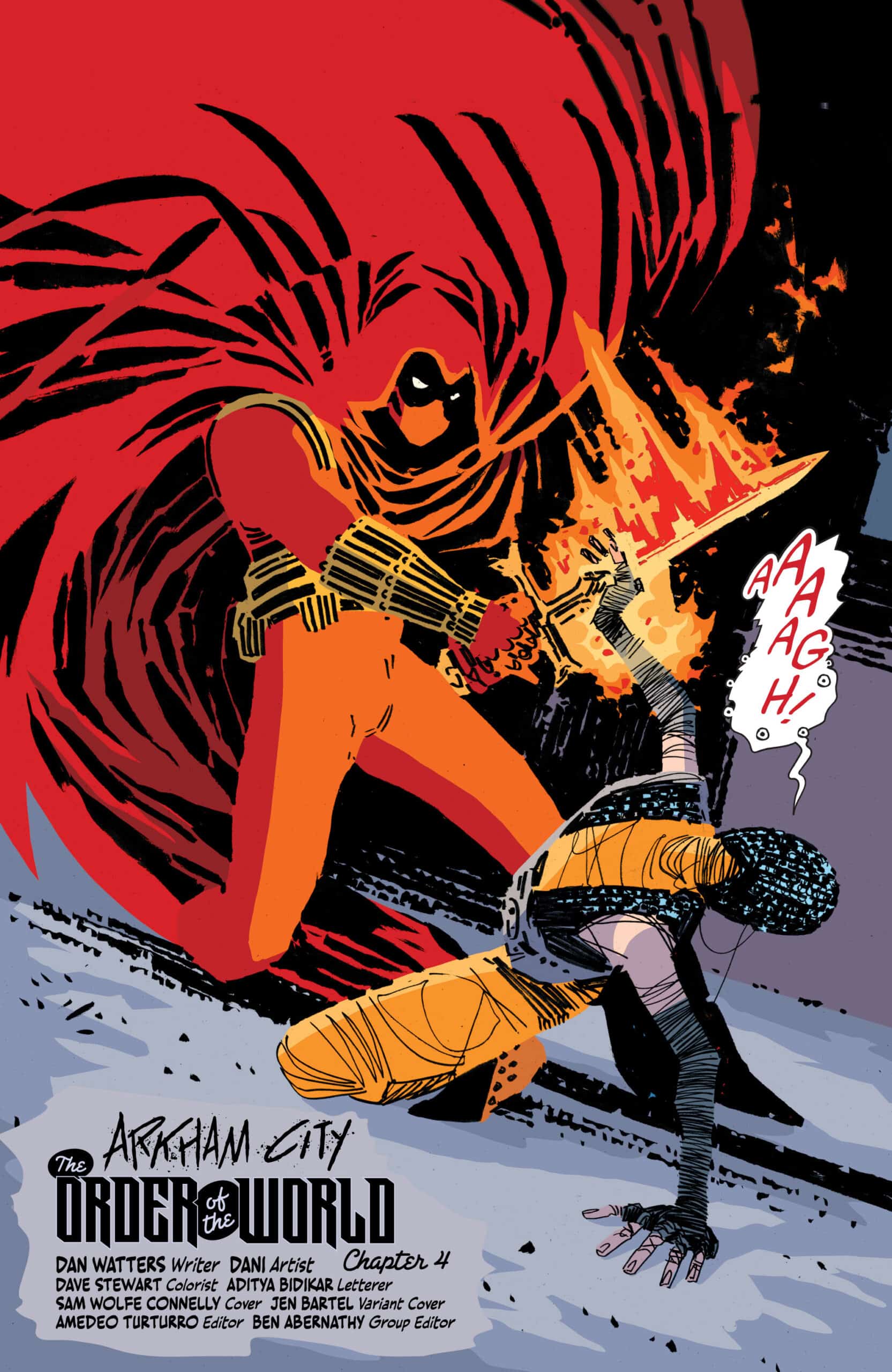 In this issue’s intimate setting, the skill of the comic’s entire artistic team truly shines, each creator amplifying the work of the others. As in previous issues, DaNi’s artwork is somewhat reminiscent of Tim Sale’s work on Batman: The Long Halloween, dominated by heavy black shadows and striking silhouettes. However, unlike Sale’s noir aesthetic, DaNi’s detailed drawings of viscera and bodily traumas place Arkham City: The Order of the World firmly in horror. Throughout the scenes in the apartment, Dave Stewart amplifies the nauseating “normal” setting with a color palette dominated by yellow-greens, orangeish and greenish browns, and the luminous, sickly lime green of Doctor Phosphorus. Further disturbing the purported “normal” apartment and conversations are the unsettling lettering and speech bubbles designed by Aditya Bidikar. While Dr. Joy continues to have standard, “normal” speech bubbles, those of almost every other character are rippling and their text often distinctive. Reminiscent of Clayton Cowles’ work on The Wicked + The Divine, Bidikar’s lettering clearly communicates each character’s individual voice, ranging from the matter-of-fact Nocturna speaking with both upper-and-lowercase letters to Doctor Phosphorus bright green screams. In combination, the comic’s artist, colorist, and letterer create a comic that isn’t only visually distinctive but immersive.

Arkham City: The Order of the World #4 (@DanPGWatters, DaNi, @Dragonmnky @adityab) continues to be a sympathetic, visually arresting look into the world of Arkham’s former occupants.

Arkham City: The Order of the World #4: Old Haunts