Arkham City: The Order of the World #6: In Search of Asylum

Arkham City: The Order of the World #6 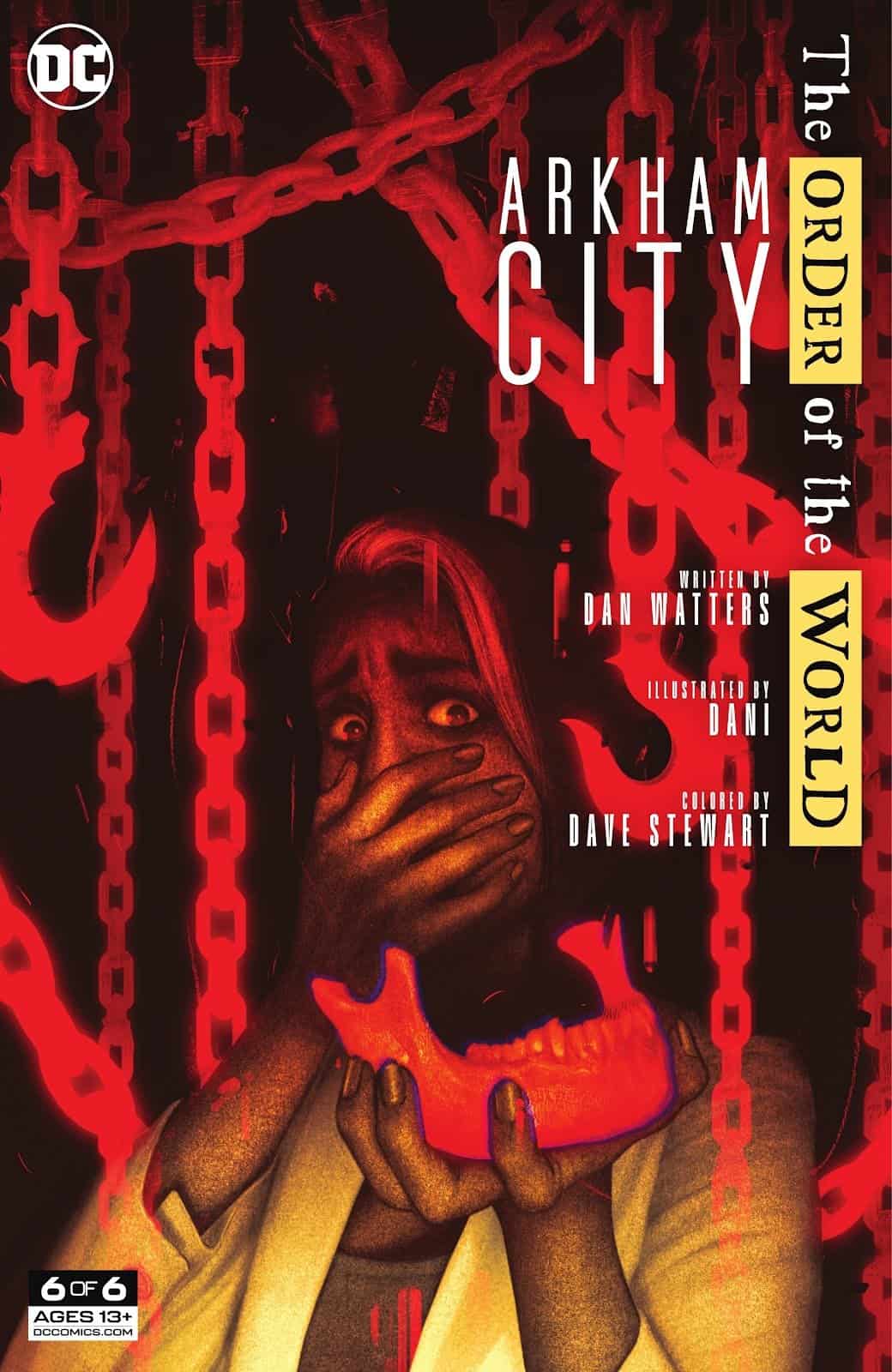 Dr. Joy has reunited with her missing patients. Now all the survivors of Arkham Asylum’s destruction are together again under one very, very nice and normal roof. But they are not alone in this strange reflection of their old home. For there is a specter with them, one of flame, flesh, and righteous fury-the angel Azrael, and he is very, very angry.

When Arkham City: The Order of the World began, the empathetic and optimistic psychiatrist Dr. Joy was doing her best to find and help the vulnerable former patients of the now-destroyed Arkham Asylum. What she – and we – found instead was a stirring portrait of the ways society both directly and indirectly harms mentally ill people.

Like every issue before it, the final issue of Arkham City is equal parts disturbing and visually arresting. DaNi’s artwork is unnerving: it’s filled with deep black shadows, textured inks, cramped rooms, and crooked bodies. This art works in perfect tandem with colorist Dave Stewart’s scarlet-splashed, desaturated colors and Aditya Bidikar’s eerie, unconventional lettering. Like any good work of horror, the visuals unsettle and unnerve. 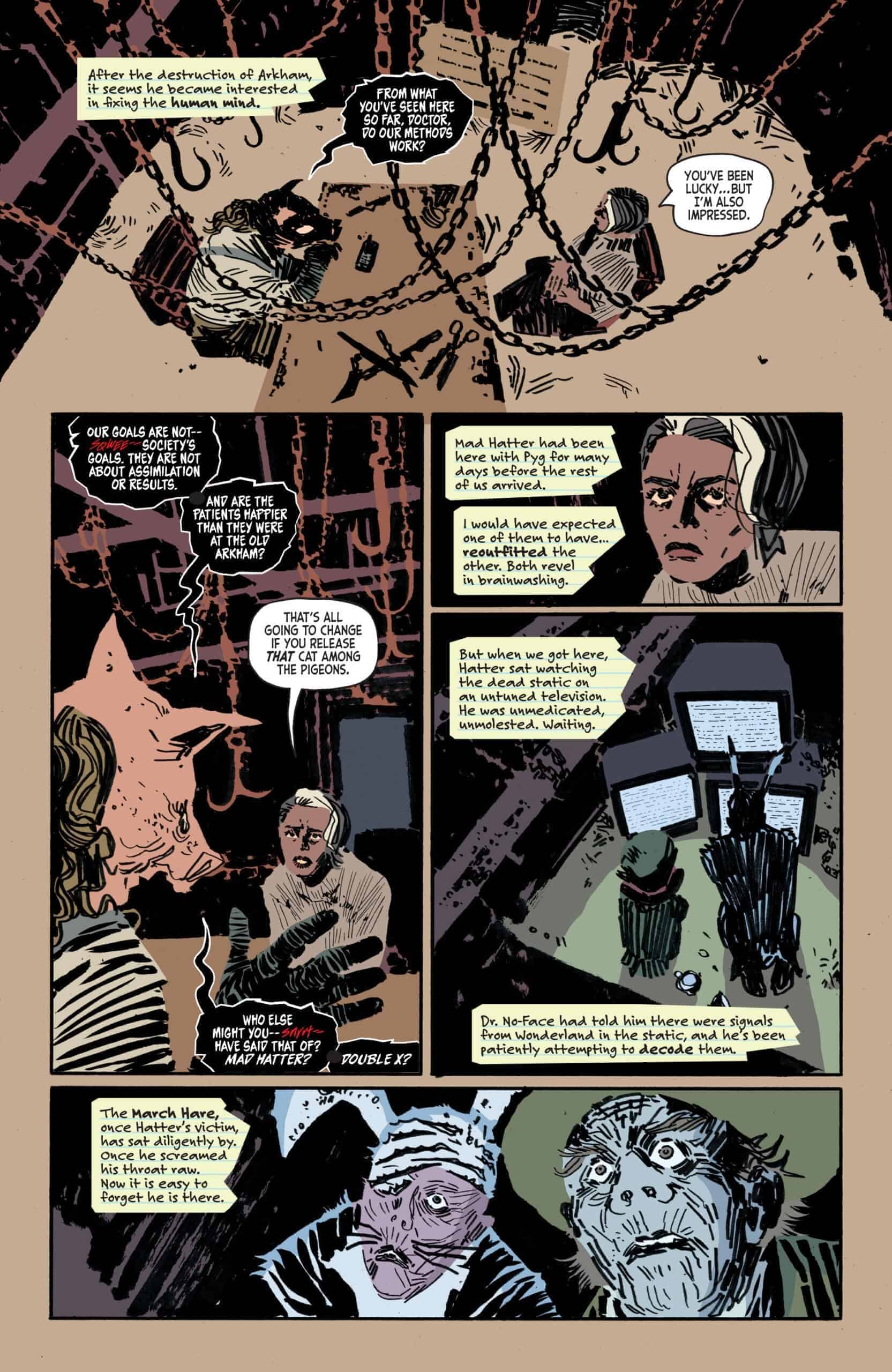 At its start, Arkham City introduces readers to the ways vulnerable mentally ill people are exploited and abused by individuals when a mentally ill man mumbling to himself is beaten to death by strangers on a Gotham street corner. As the series progresses, Dr. Joy meets Solomon Grundy and learns Arkham Asylum’s traumatic history of exploiting patients for entertainment and torturing them via lobotomy: both of which are very real pieces of medical history. Later, the series offers an empathetic portrait of two former patients, Nocturna and Doctor Phosphorus, and their ill-fated attempt at assimilation. 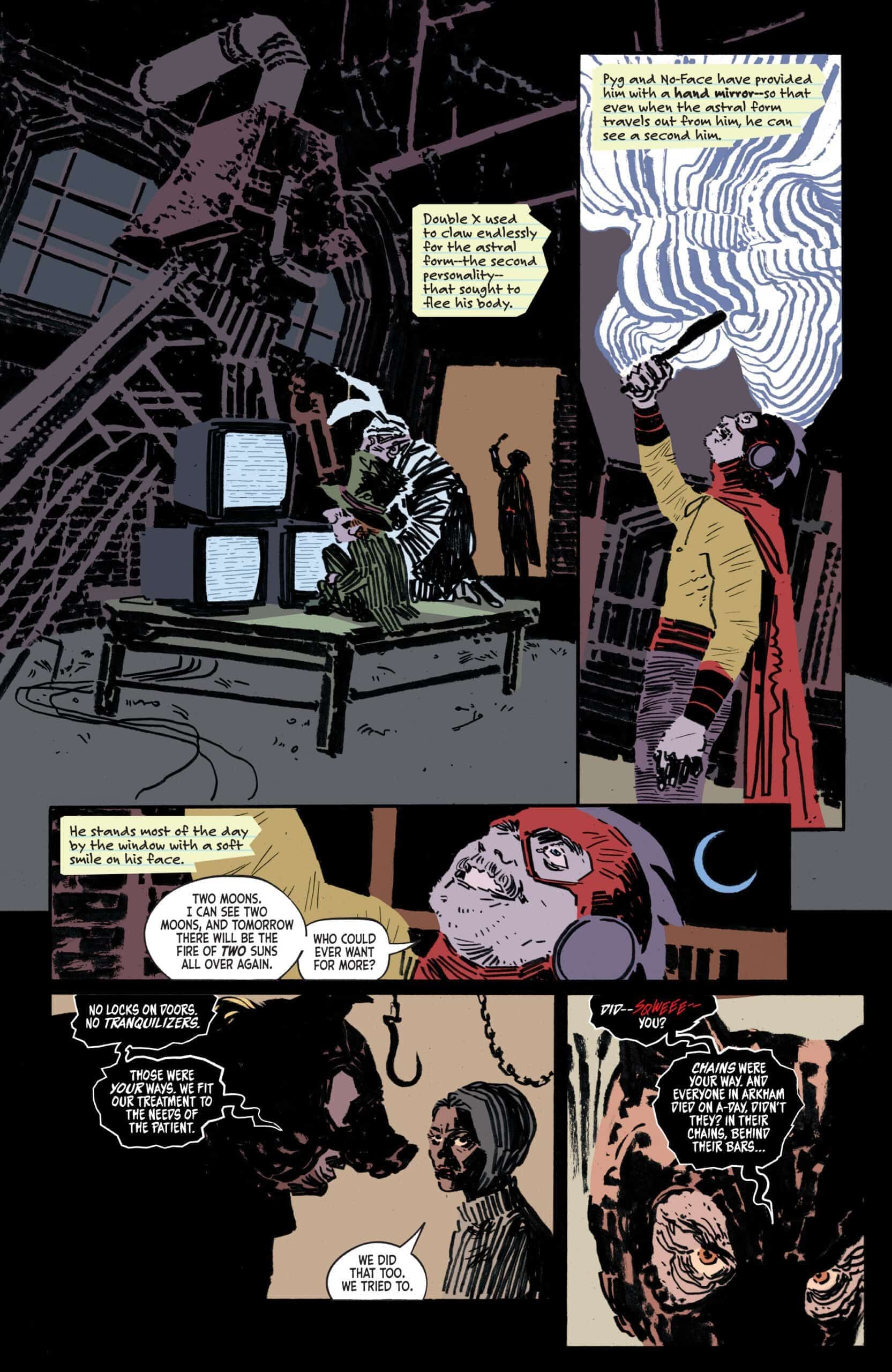 Eventually, Dr. Joy concludes that the best course of action is for she and her former patients to form a community of exiles in a new asylum – one run by former Batman foe Professor Pyg in the guts of an old slaughterhouse. However, while this setting seems like a good-but-imperfect solution in which former patients are treated according to their individual needs, the setting foreshadows a and perhaps inevitable conclusion. Even if this community is insular and nonviolent, the series shows how a society that views mentally ill people as a threat will nonetheless prevent mentally ill people from the other definition of asylum: safety from danger. The chains that fill the pages of the issue and strew the cover like garland point to a lack of escape from a world built on violence and imprisonment. Police officers and the vigilante Azrael, figures who supposedly uphold the “order of the world,” maintain that order by disposing of vulnerable people who have no place in a world unwilling to change or look upon them with empathy. 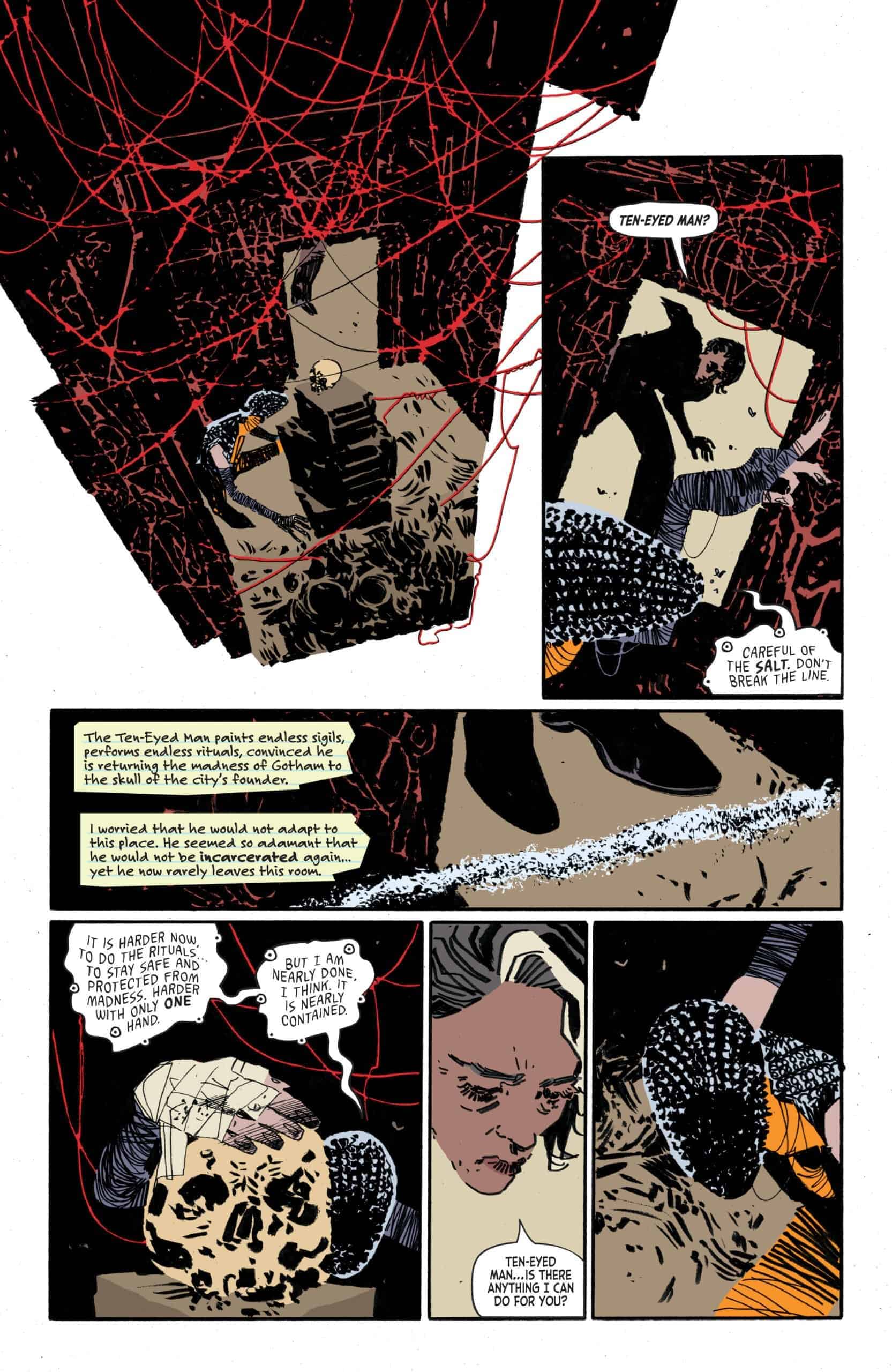 The series does an admirable job of examining how systemic prejudice leads to unavoidable harm but sadly doesn’t reach larger conclusions to how bigoted beliefs and stigma are reinforced or offer possible solutions to treating systemic harm. At times, the series itself  reinforces stigma towards medication (though meds are often life-saving) and mentally ill people (perpetuating a widely-held but inaccurate belief that mentally ill people are disproportionately violent).

Nonetheless, it’s an elegantly-crafted piece of fiction that addresses an element of both fiction and, more crucially, reality that often goes ignored. While its ending feels overwhelmingly tragic, the glimpse of hope teased at its end is worth holding onto. Arkham City: The Order of the World shows the World writ large at its cruelest, but the book itself shows the potential for comics (and people) to grow and change to show compassion for vulnerable people who are often demonizes instead.

Arkham City: The Order of the World #6 ends the series as it began: visually arresting, terrifying, and refreshingly compassionate to vulnerable people that society forgot.

Arkham City: The Order of the World #6: In Search of Asylum