Arkham City: The Order of the World: The Public Eye

Arkham City: The Order of the World 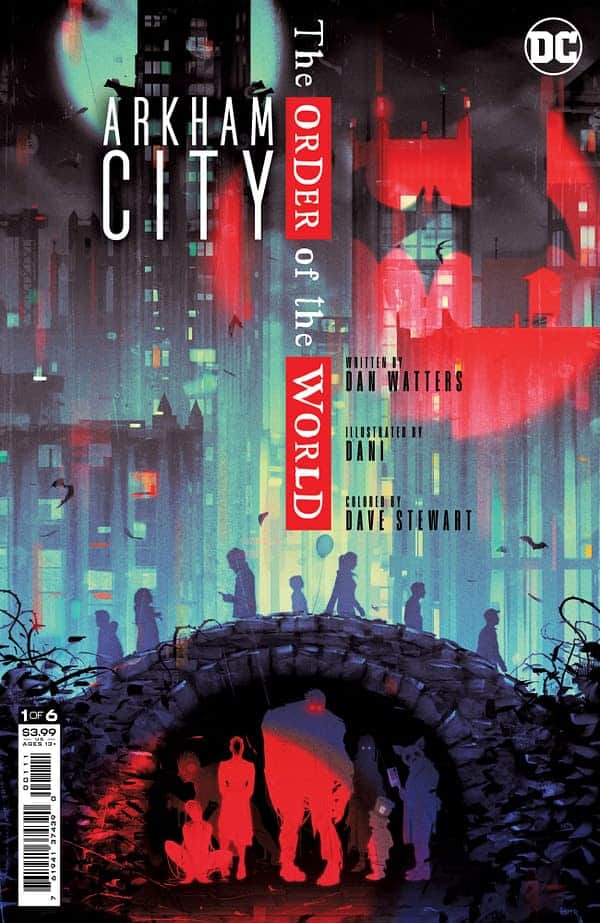 The Joker's attack on Arkham Asylum left the long-standing Gotham establishment in ruin, most of the patients killed or missing, and only a handful of surviving staff—a few nurses, a gravely injured security guard, and one doctor. In the chaos of the assault, it is believed that several of the asylum's patients escaped and scurried off into the dark nooks and crannies of Gotham City. Now, these Arkhamites walk among us, and it's up to the Asylum's one remaining doctor, Jocasta Joy, to round up her former patients. Meet these Arkhamites: a woman with no face, a pyggy in search of perfection, a man who feels nothing and burns everything, a woman who must devour life to save herself, a man unfit for the waking world who looks instead for Wonderland, a body with more than one soul, a being unbound from time who lives in the present and the past, a boy who seeks the comfort of vermin, and the twisted man who sees them all for who they are. And witness the avenging angel who stalks them.

Since its introduction in 1974’s Batman #258, Arkham Asylum has become a fundamental fixture of the DC universe. Arkham City: The Order of the World follows Dr. Jocasta Joy, the sole surviving psychiatrist of Joker’s attack on Arkham, as she attempts to round up Arkham’s former patients. Sam Wolfe Conelly’s cover, depicting the escaped prisoners huddled beneath a bridge as pedestrians cross overhead, is a pitch-perfect introduction to Dan Watters’ story: it shows the former prisoners as separate from normal society, while the threatening red aura surrounding them still suggests that they are capable of harm. Yet, the comic itself tells a compelling story that interrogates the relationship between Gotham and Arkham’s inmates. In doing so, it also highlights the treatment of mentally ill people in the real world.

Because media that depicts mental illness inevitably influences the perception of mentally ill people, it’s hard to overestimate Arkham Asylum’s prominence in pop culture, and thus its role in shaping perceptions of mental illness. Arkham appears throughout decades of comics, films, animation, video games, and toys. Unfortunately, depictions of Arkham and its inmates generally act to reinforce incorrect but widely held stereotypes about mentally ill people. The Order of the World addresses and subverts some stereotypes like that of the evil psychiatrist. However, it unfortunately plays directly into others like the stereotype of mentally ill people being violent. 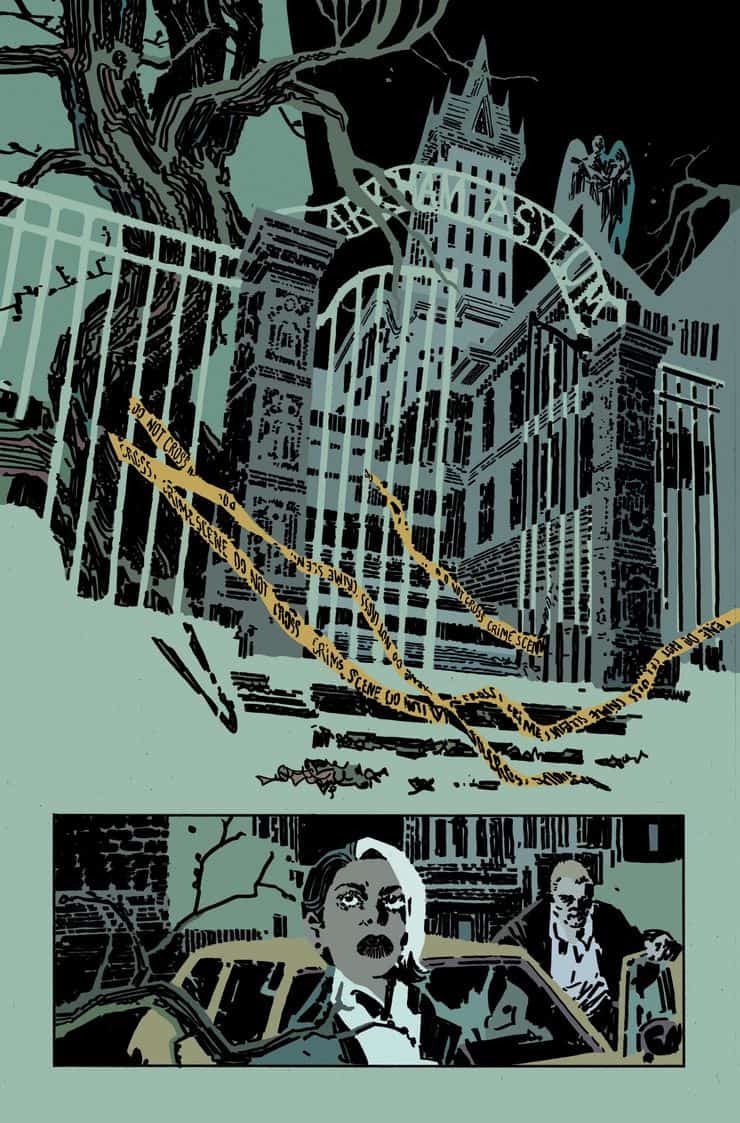 Rarely are Gotham’s villains diagnosed with specific mental illnesses (Riddler’s OCD is a notable exception); instead, most are generically “insane.” Their violence is attributed to mental illness and their imprisonment in Arkham is generally depicted as a fitting end to their villainy. The Order of the World adopts this pattern with little question; Dr. Joy’s missing Arkham patients include (among others): a man who replaces human faces with doll faces, a man who wants to eat children, Mad Hatter, and the Ten-Eyed Man.

Batman/Gotham comics — including The Order of the World — frequently play into a widely held belief that mentally ill people are far more violent than people who aren’t mentally ill. The dramatic black shadows of Dani’s artwork, complimented by Dave Stewart’s muted colors, create a grim noir aesthetic reminiscent of Batman: The Long Halloween. Along with its frequent depictions of gore, this comic reads clearly as a horror/thriller story. However, the horror and thriller genres have their own harmful histories of vilifying mentally ill people. 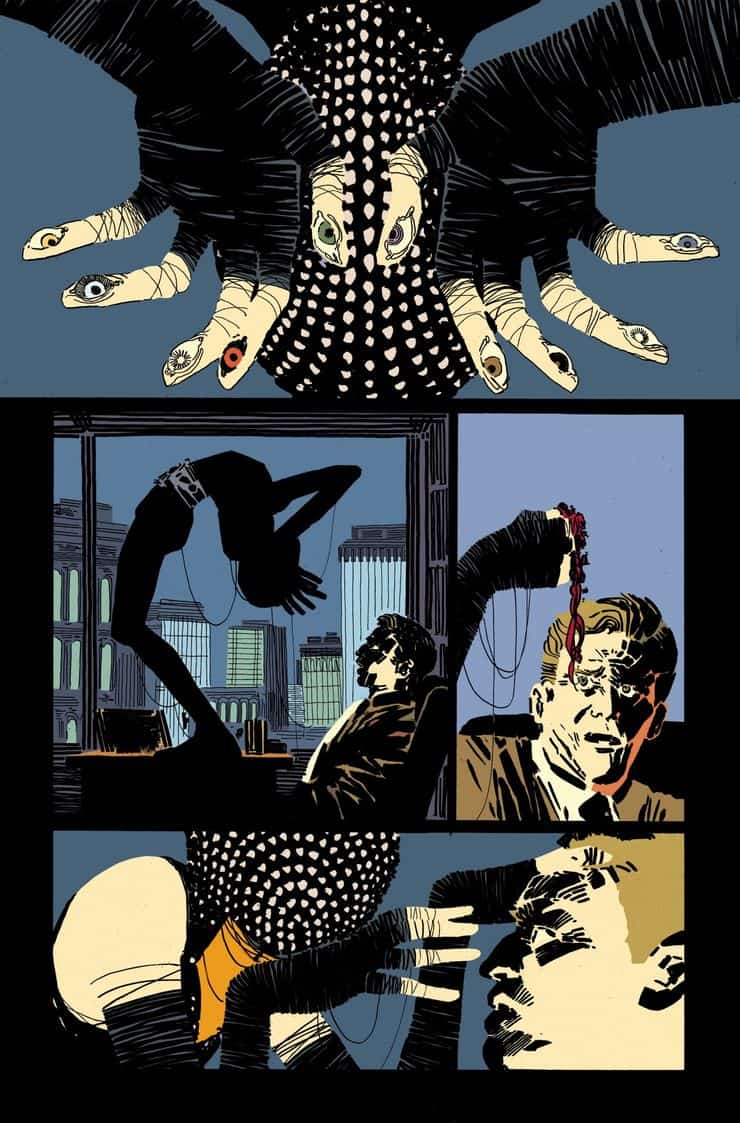 While The Order of the World does mentally ill people a disservice by reinforcing the association of mental illness with violent acts, it also begins to address the way society often abuses and ostracizes mentally ill people. One of the comic’s two narrators is one of Arkham’s former convicts: the Ten-Eyed Man. Dani’s redesign of the Ten-Eyed Man is both flamboyant and menacing. His speech bubbles, which letterer Aditya Bidikar surrounds with tiny eyes, float eerily through the comic’s pages as the Ten-Eyed Man sympathetically recounts the lives of Arkham’s former prisoners. In the Ten-Eyed Man’s haunting narration, he frames all of the other escapees as people society has abused and left behind, searching for normalcy and safety.  While a couple seem harmless enough (Nocturna and Dr. Phosphorus are struggling to be normal people living in an apartment), the comic places emphasis visually on the people who have victims rather than those who are victims. Unfortunately, because the Ten-Eyed Man is literally committing a violent crime while he shares his poignant tales, his valid observations about an abusive society are undermined for the reader. In a platform this powerful, such a mixed message has a greater chance of reinforcing harmful stereotypes than correcting them.

In addition to its myriad of bloodthirsty mental patients, DC’s comics are filled with malevolent psychiatrists and psychologists like Dr. Hugo Strange, Amadeus Arkham, and Scarecrow. Not only evil, they’re mentally ill and inevitably inhabitants of Arkham. In reality, prejudice often pressures mentally ill mental health professionals to keep their diagnoses secret lest they face discrimination from colleagues or patients. In fact, rather than mental illness making mental health providers less able to help patients, it sometimes makes them better doctors. 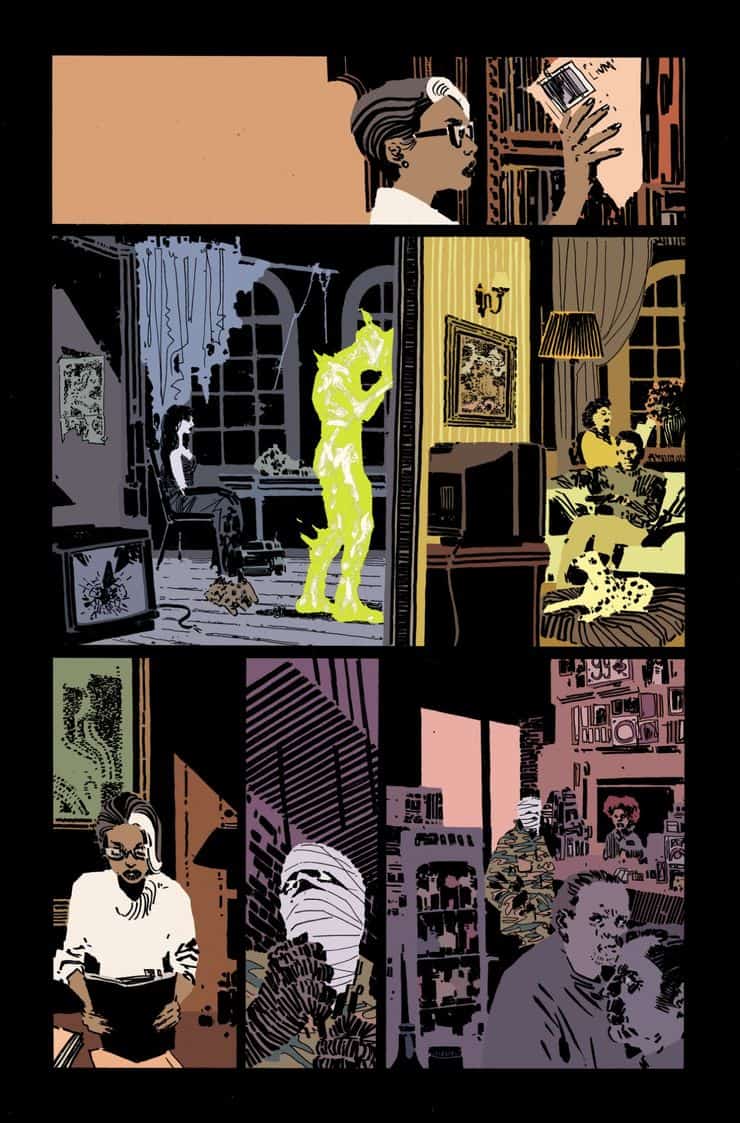 Given decades of negative depictions, Watters’ introduction of Dr. Joy and the worldview she represents are a refreshing change of pace. Dr. Joy directly addresses the harmful true history of psychiatric institutions and continued abuses by mental hospitals. In the fictional world of Gotham, however, Arkham is still reiterated time and time again as a necessary evil. Unlike many of her predecessors, Dr. Joy shows concern for her patients and laments her inability to help all of them, including one patient with PTSD who is beaten to death. However, the final events of The Order of the World’s first issue still leave room for the possibility that she could become yet one further “mad doctor.”

Arkham City: The Order of the World is a disturbing comic, not simply due to its plot but due to its depictions of mentally ill people for both better and worse. Much like this comic highlights, the real world continuously fails mentally ill people. None of these tropes — of mentally ill killers, scary mental hospitals, and violent mentally ill psychiatrists — originated in Batman/Gotham stories, but they and other tropes like them nonetheless thrive there. All too often, stories like those about Gotham contribute to real-world failings and real-world harm. For mentally ill readers, they reinforce self-stigma and make it harder to seek help. Books like Arkham City: The Order of the World have opportunities to sway public opinion — to dispel rumor and educate. Hopefully, future issues choose to do that.

Arkham City: The Order of the World #1 is ambitious and visually arresting. Looking through the eyes of Arkham’s former inmates, it also accentuates the ways both reality & fiction often fail mentally ill people.

Arkham City: The Order of the World: The Public Eye