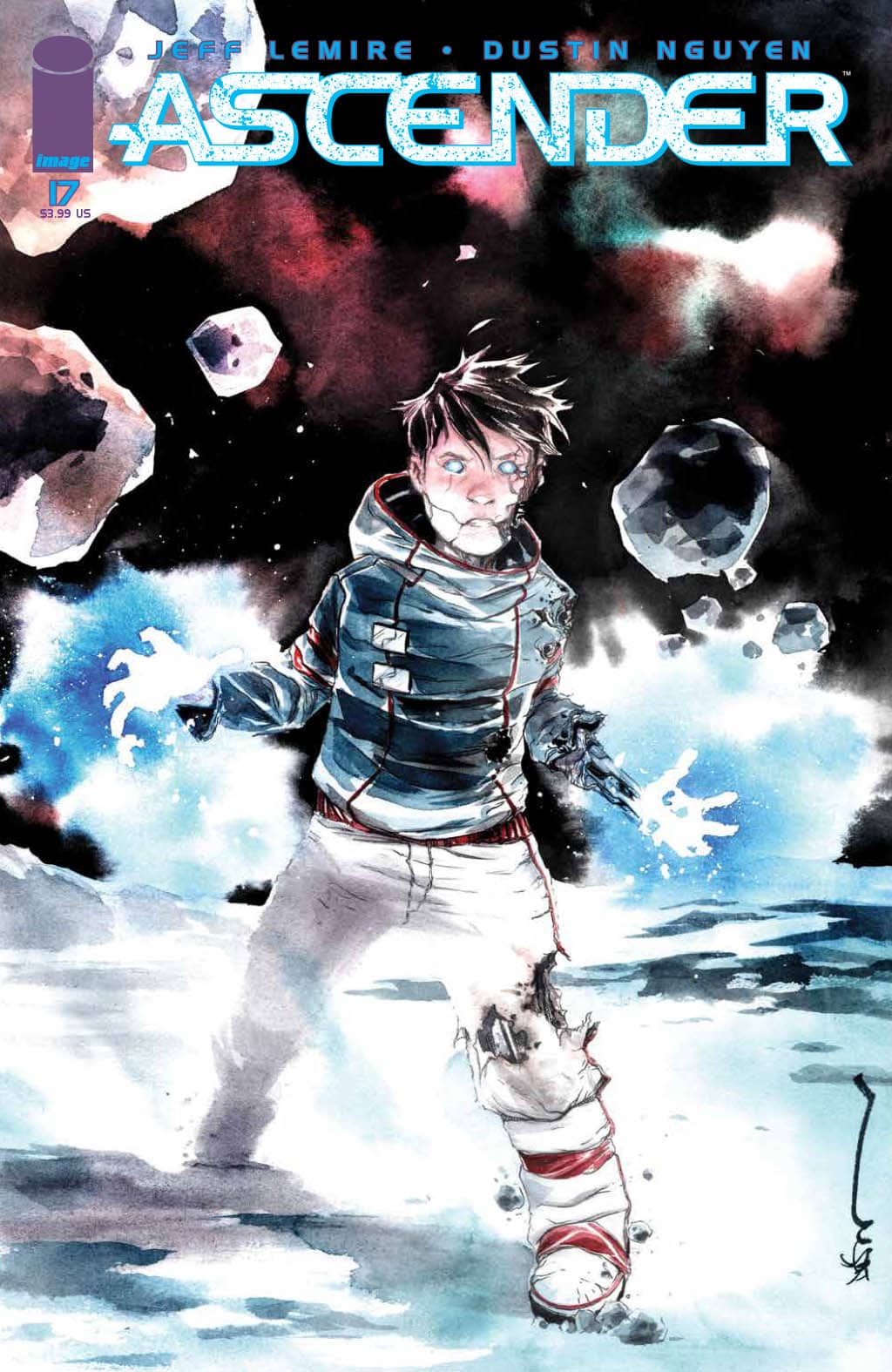 “STAR SEED,” Part Three PENULTIMATE ISSUE! Mila takes a pivotal step forward as magical blows are traded on Dirishu-6, where our heroes find themselves surrounded on all fronts. Everyone is either on Dirishu-6 or headed that way. Tim-21 is confronting the Coven's Witch Sisters with his magic (and Driller). See Comic Watch's Ascender #16 review for more details.

We are down to the final two issues of Ascender. I expected things to be wrapping up, but the dynamite team of Lemire and Nguyen are still adding unexpected twists and turns to the story. The majority of Ascender #17 is the big show-down between Tim-21 and Mother’s Sister in a magic dual. Tim’s completely outclassed. The Gnishians start hunting Mila’s group on Dirishu-6 with deadly results. Before the scrappers can do more damage, something unexpected happens deep in the mining tunnels of Dirishu-6. “Whoa” indeed. Before ending the issue, Ascender comes full circle from Descender in the most satisfying way possible.

With all the action from the primary story, there isn’t much room for a b-story in Ascender #17. We touch upon both Kanto’s and S’Tok’s plotlines briefly. It’s enough to keep them top of mind without slowing the primary story.

After two complete series with these characters, Jeff Lemire’s character dialogue is consistent and the plotting tight. You’ll move from page to page anxious and excited to see the fates of our beloved characters.

Dustin Nguyen’s linework in this issue was crisp and well-defined. The action was epic. Mother’s Sister is both terrifying and beautiful in her fury. Inkless, color-only images have always been a strong-point for Ascender and continue to be in this issue. Steve Wands’ word-based sound-effects are integral to the success of Ascender #17. All of the action is punctuated by well-defined “fra, fra” and “choooms”.

I felt like I was watching a wide-screen, sci-fi adventure. The 16×9 aspect ratio panels kept a steady beat throughout the issue. When we get to the final pages of Ascender #17, consisting of a double-page spread and a single full image page, it hammers home the conclusion of the magical battle.

Should the strong and the powerful take everything they want? Are universal constants like magic or knowledge to be shared or hoarded? These are rock-solid themes and make good source material for sci-fi adventures.

The universe of Ascender always seems to be expanding. This issue we get new space-based creatures around the Sampson System.

“It’s been so long since I’ve seen an actual robot. I almost forgot how fun it is to destroy them. ” Mother’s Sister to Tim-21.

If you are a fan of science fiction or fantasy and you haven’t tried either Descender or Ascender, you owe it to yourself to read this series.

There's only one issue of Ascender left. Ascender has been just as good as Descender. It will be a long thirty days as we wait for the series finale.