Ascender #18: “I Was There When it Started Again.” 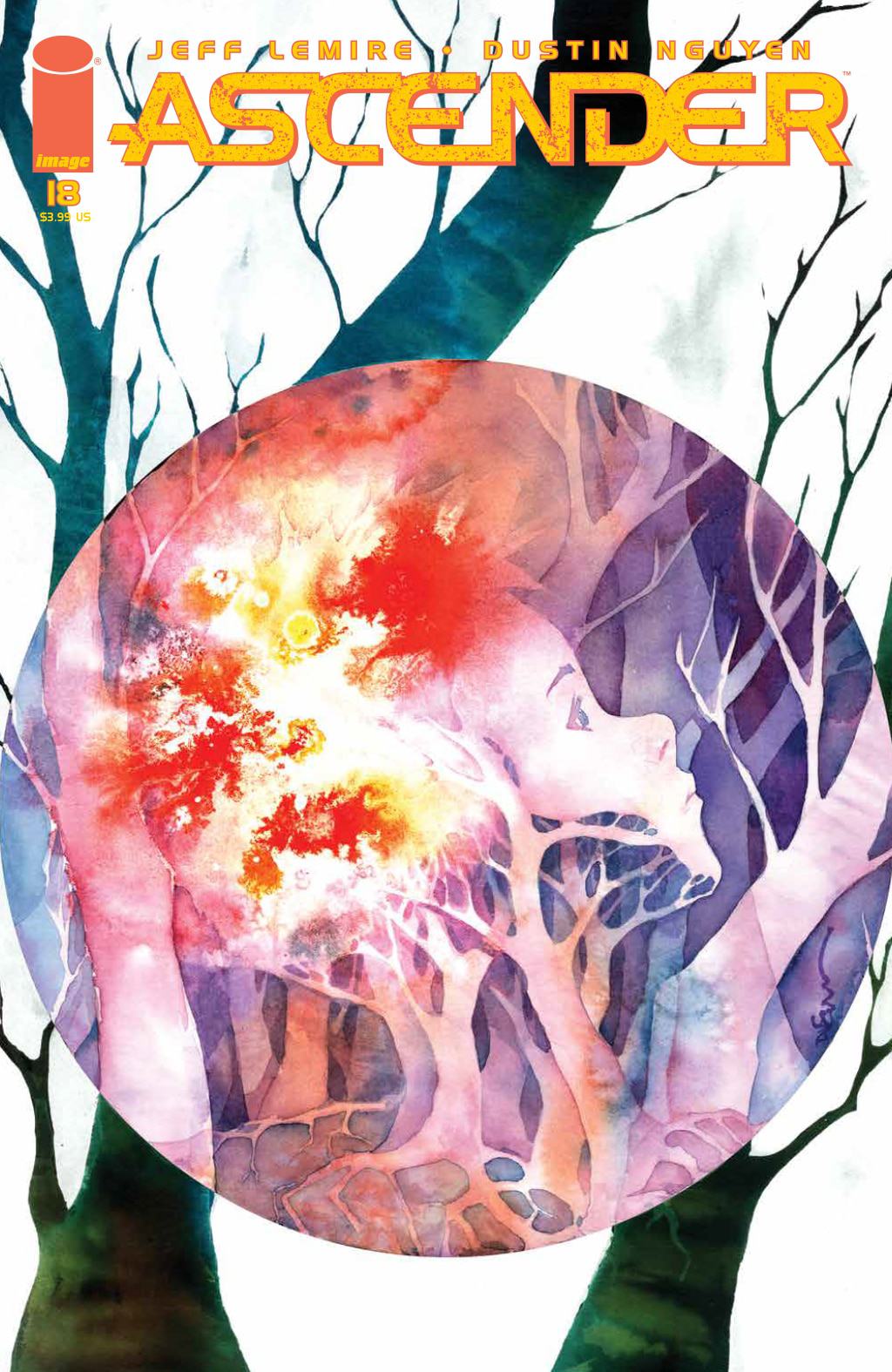 In Ascender #17, Tim-21 took the fight to Mother and her sister. The Gnishians attempted to take advantage of the situation. For the full recap, see Comic Watch's review of Ascender #17.

The only word grand enough to describe this final issue of Ascender is “beautiful.” Ascender #18 is the comic version of the perfect baseball game or a flawless, gold-metal Olympic dive. In one issue, the creative team of Jeff Lemire and Dustin Nguyen wrap up all the plot lines and toss in three twists (I guessed the first twist with the witches a few issues ago). Driller becomes the hero we always knew he was. The Witches get what they deserve. Doctor Quon redeems himself. Mila saves the day. Kanto’s hollow life is given meaning. Tim-21 evolves.

“Every word a gem.” That’s the mantra of a good writer, and it’s true this issue. A lot needed to happen in Ascender #18 and every word, every scene, every character is positioned to move us through the story. The words did that and will pull you on an emotional rollercoaster.

The standout item in the artwork this issue is the facial expressions. Anger, fear, serenity… you’ll see them all throughout the issue. The coloring is typical Ascender water-color goodness. In addition to facial expressions, we also get amazing camera angles: wide establishing shots, zoom-ins, and medium action panels are all combined in balance. The job of the letterer is a subtle one. Steve Wands uses word balloons of different shapes and colors. His sounds lettering works with the art enhancing the scenes.

Last issue the panels were all about wide-screen action. In Ascender #18, the panels are all about timing. As a reader, we’re carried along from scene to scene. The panels pulling and pushing us between emotional highs and lows. A prime example is this scene between Kanto and Andy. Three panels. Three story beats. Two brothers reunited. 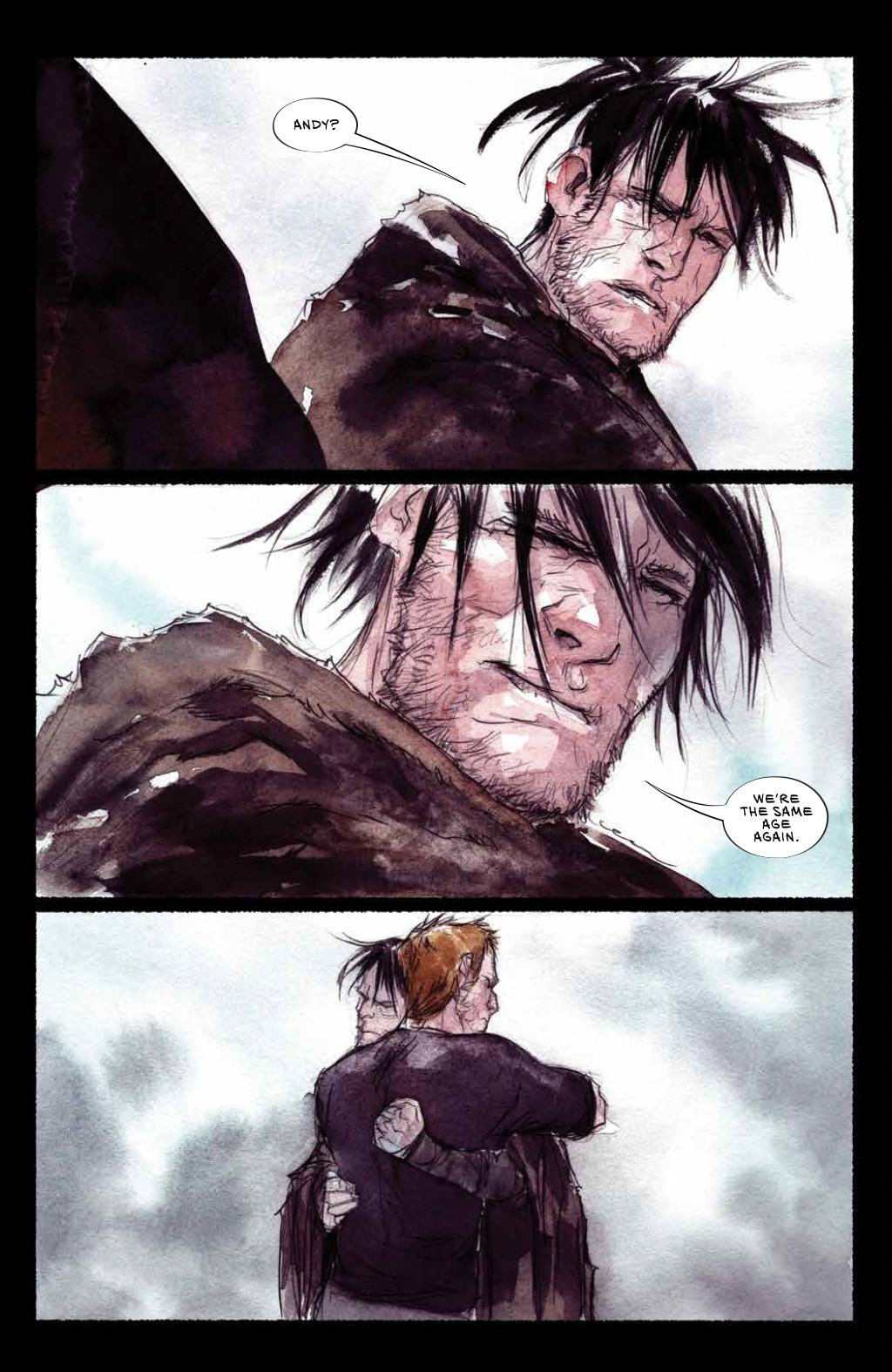 Family and destiny are our themes in Ascender #18.

We see the results of a destructive family in the witches. Juxtaposed to this is Andy’s family who save the galaxy by coming together.

Many of the paths our favorite characters have been on feel like destiny’s heavy hand guiding them. Effie’s life path was horrible, but, if it had been anything else, could she have fulfilled her role in saving Mila? Despite trying everything she could, Tesla becomes the warrior and soldier her father trained her to become.

The world building primarily happens in the phrases the characters say. Jeff Lemire closes the loop on a lot of plot points so we learn some of the unsaid things like details about the Forge of Spells or the purpose of magic in the galaxy.

If you’ve been reading Descender and Ascender from the beginning, you will be absolutely satisfied with the conclusion to this series.

Will there be a third installment to the Descender series?

This is the end. Now that you know the entire tale, it’s time to grab your old issues of Descender and start the story from the beginning. Notice all the ways Ascender and Descender are tied together.

This is pure comic book perfection. You won't read a better series finale this year (maybe this decade).

Ascender #18: "I Was There When it Started Again."