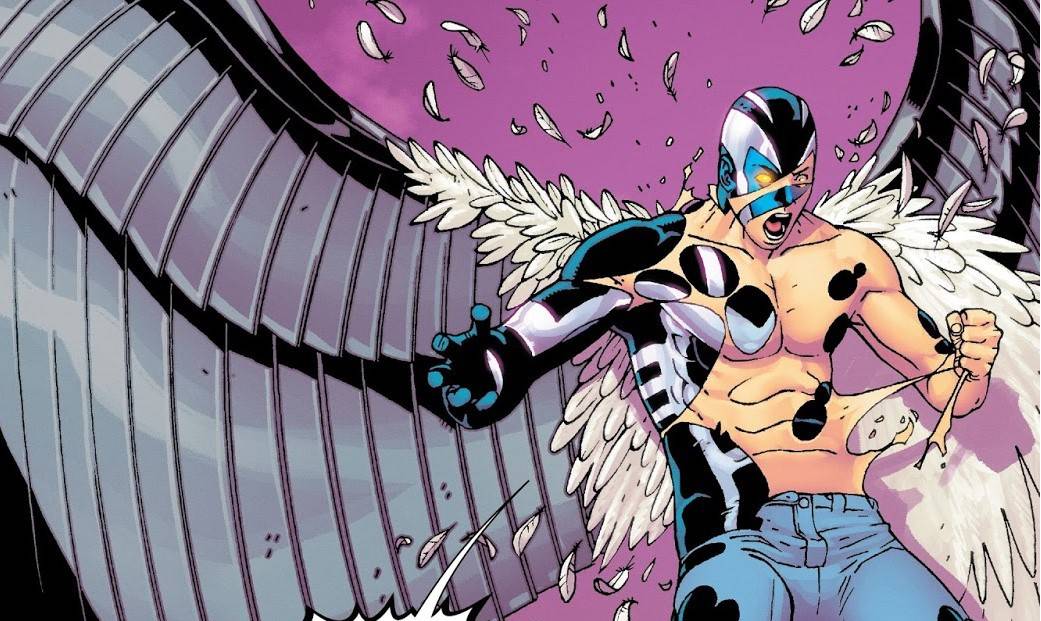 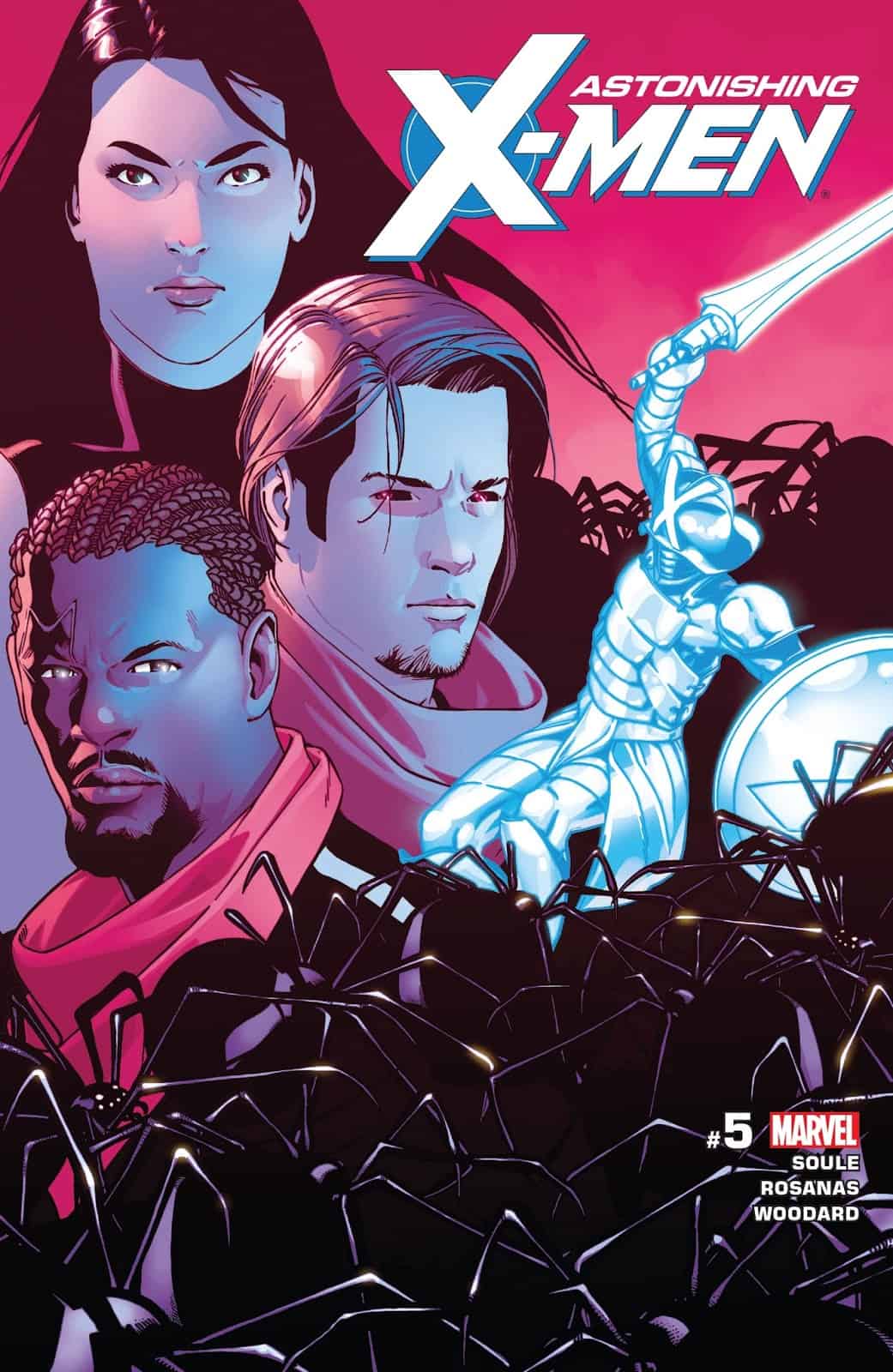 Xavier and the Shadow King are locked in a lethal game with the X-Men as the pawns. Two have fallen and the rest begin to prepare for their confrontation with the odds stacked against them. The question remains, with Xavier playing as dirty as Farouk, who is the real enemy?

What You Need to Know:
London’s special forces have engaged Psylocke, Angel, and Bishop. Wolverine falls to the Shadow King and becomes his first grasp onto the mortal plane. Xavier maneuvers to counter his foe by making choices based on cold calculation and forfeits Gambit in order to collect the remaining X-Men.

What You’ll Find Out:
The professor gathers his former students and is met with skepticism and resistance. Knowing his students intimately he utilizes their affinity and recounts events in which he ended up locked in a never ending battle with Farouk after his death. At the same time, having no real connection with Fantomex, Xavier applies his age-old methods of appealing to a person’s true desire offers the promise to deliverance. Fantomex seems to submit and Xavier moves him into position where he will likely play a key role in a turning the momentum into his favor and delivering a calculated win. Xavier needs to hurry. The essence of what he has become is decaying under the immense pressure of multitasking under the constant barrage of Farouk’s raw unrelenting power. 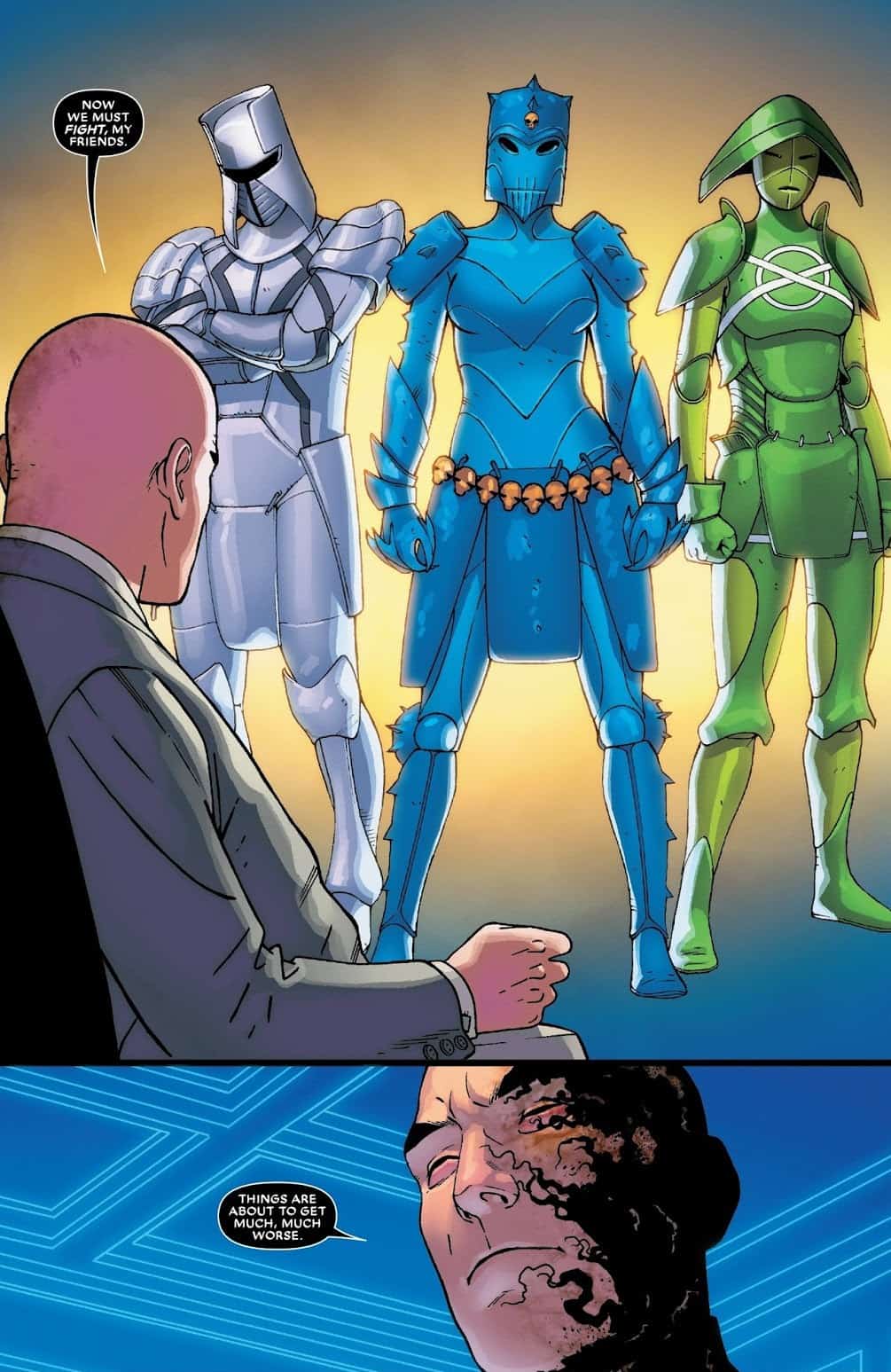 Elsewhere, Farouk wastes no time moving his second agent out into the world. In many ways, Gambit is more dangerous than Logan simply because of his ability to produce damage on a much larger scale. After evading Psylocke and moving through the city, he finds Bishop who isn’t aware of the danger he is in until it is too late. Using the advantage and momentum, Gambit and Logan begin to act as catalysts in which Farouk is able to spread his unique form of psychic power by means of contagion with rapidly spreads through the London district. 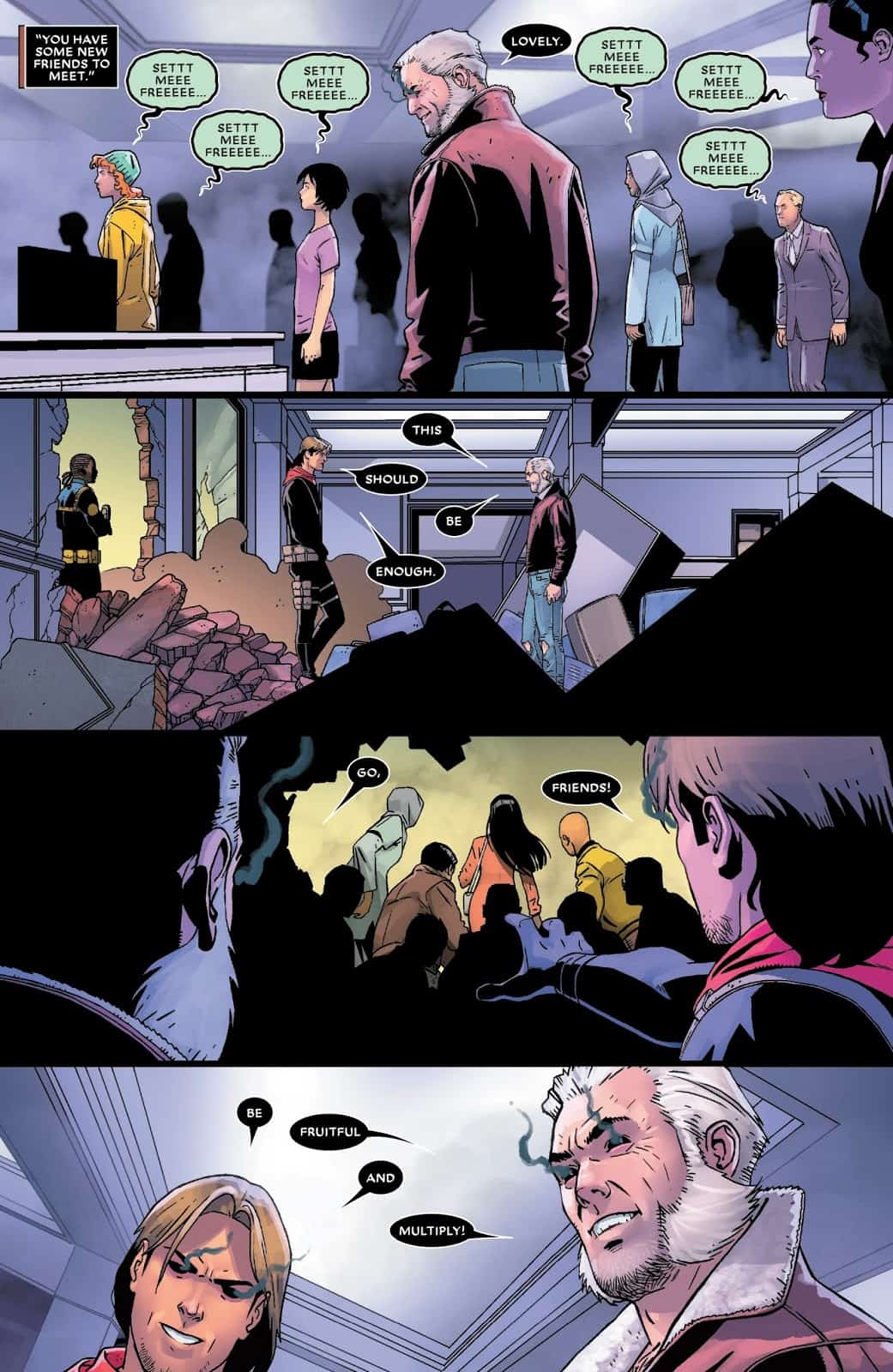 Psylocke learns that this infection will quickly put them at an insurmountable disadvantage and understands that Warren is the key to stopping the rampaging Logan and deadly Gambit. Warren concedes under the assurance that the deadly persona can be contained with Psylocke’s aid and releases the Archangel. 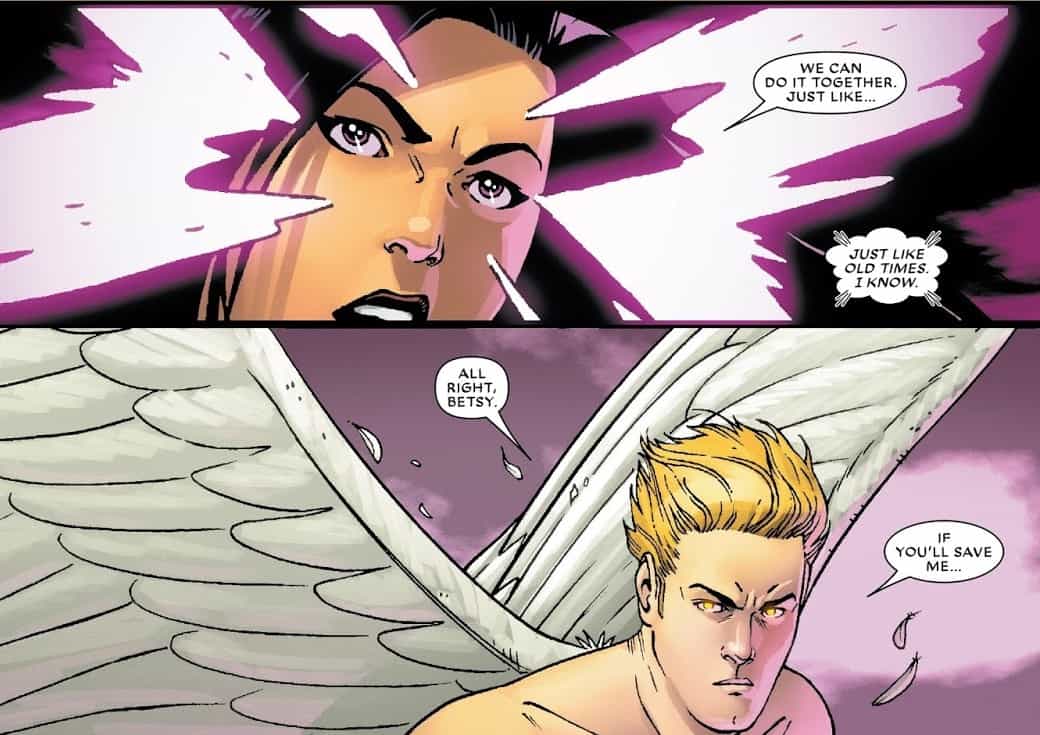 What Just Happened?
Though Astonishing X-Men’s 5th issue offers plenty of action, Charles Soule slows down the pacing slightly in an effort to provide further context to the events leading to Xavier and Farouk’s contest and resumes his underlying compare and contrast subplot. Throughout the 5 issue run, Soule suggests that the two rivals share more similarities that are distinguished when looking at a glance. Soule encourages the reader to dig deeper and reveals that though the classic model that defined Charles Xavier as a nurturing caretaker and doting paternal figure to wayward children is a direct contrast to Amahl Farouk as the hedonistic deceiver and domineering slaver to the vulnerable isn’t entirely as black and white as they have been portrayed throughout their history. In fact, Soule theorizes that they are both equal in measure beneath their deceptive exterior, willing to attain, but simply utilize opposing methods to obtain ultimate goals.

Farouk uses victims as blunt tools and employs bold strategy in an effort to overtake an opponent. That isn’t to say he isn’t keenly adept at intrigue and employs deception with manipulation on a master level.

Xavier opts for layering his designs with a subtle hand and employs his resources methodically, electing to distract and throw his opponent off track while moving his instruments in place and slices away any opposition with surgical precision.
Both understand on a mutual level that in order to achieve the advantage over such a deadly opponent, one cannot permit emotional attachment to sway their judgment. The pair meet in a similar fashion by detaching their humanity to fulfill their desired objectives.

The roster, each having unique roles to fulfill submit to the inevitable that this is a world in which they have no control and resign themselves to play the willing pawn. With an entire city being swarmed by the Shadow King’s psychic plague, what choice do they have?

Though I find the characters enjoyable, save a couple, I have enjoyed the most recent developments with Warren and his continued identity crisis. When originally molded into Archangel which lasted for years, it was intended to give the character with no real impact some teeth. On some levels, it worked. We were given a more aggressive character with enhanced utility. But the emotional and mental trauma of becoming the angel of death seemed to a burden he shouldered without any real difficulty. It was only until years later that the toll of Apocalypse’s design began to bear significant impact. Now we have a man who has committed horrible atrocities and is deathly afraid of what is locked inside of him. I was very pleased to see that there is a real internal moral conflict and only with Psylocke’s reassurances and the trust placed in the depth of his love for her however complicated that may be as well, he is willing to set the death deed inside of him free.

Final Thought: Soule has done a good job of giving multiple narratives in one issue consistently for the past 5 issues. From a literary standpoint Astonishing offers much more than the standard model of black and white, good versus evil. Alternatively, it challenges the reader to look for the subtle underlying developments and challenges the prototype mentality of the virtuous hero by providing stark parallels that give plenty of cause to reconsider what you think you know.