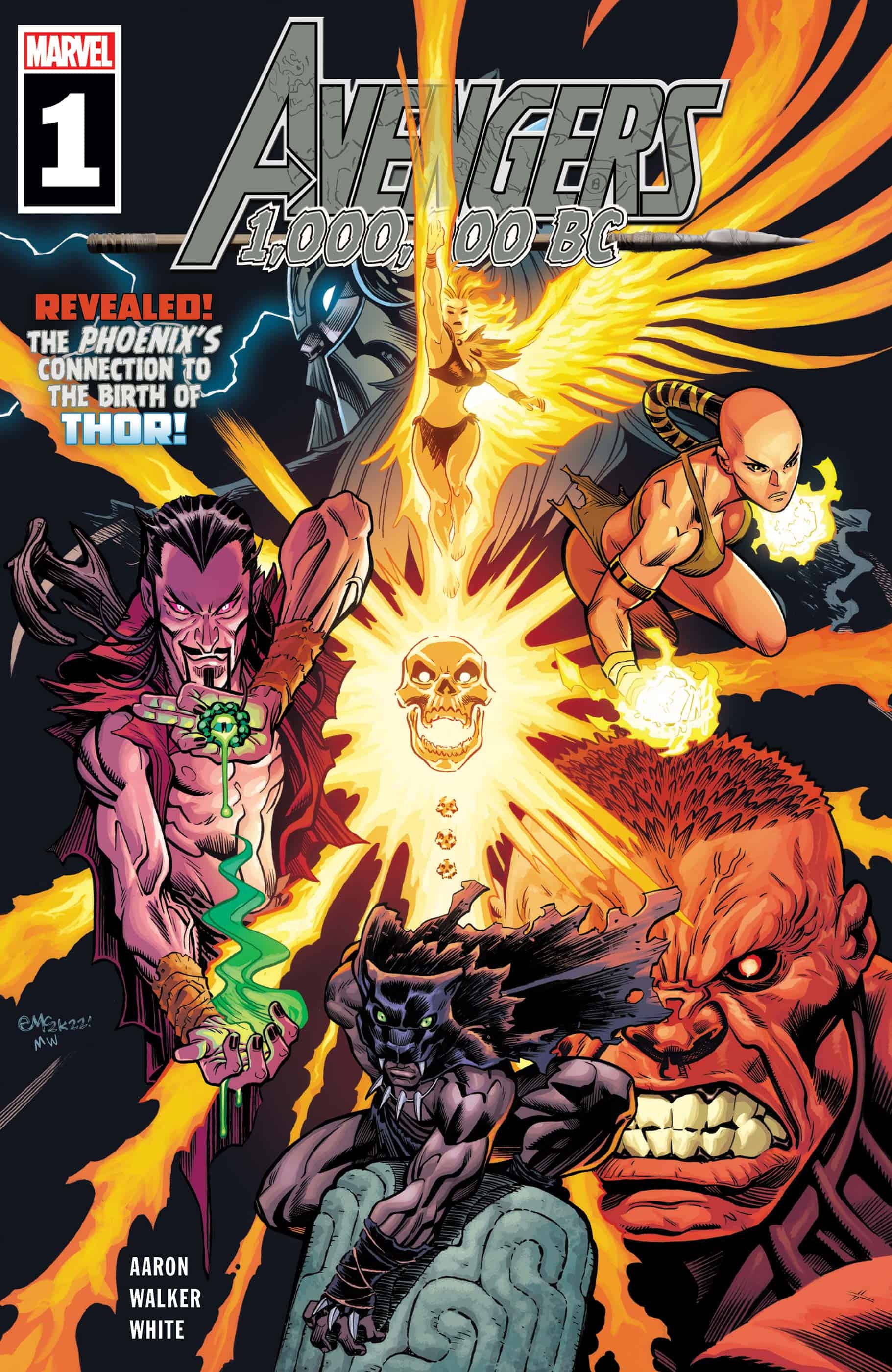 All-father Odin! The Starbrand! Agamotto, the Sorcerer Supreme! The Black Panther! The Ghost Rider! The Iron Fist! The Phoenix!

The adventures of these Prehistoric Avengers were lost to history until Iron Man time-traveled to the past and first learned of the heroic predecessors to the modern Avengers.

In the present, the Phoenix force hinted that the thunder god Thor did not know the true story of his birth, a tale that has remained secret…until now.

The date was February 3rd, 2021, when Marvel published the third installment of “Enter the Phoenix,” the latest Avengers story arc from the mind of Jason Aaron. The narrative had so far been met with middling responses, but it was not until the release of its infamous third chapter that quiet fan dissatisfaction morphed into outright irritation. Aaron was eager to leave his mark on the franchise, and to deliver on the often-unfulfilled promise of a plotline with major ramifications for the characters. Spurred on by these desires, Aaron dropped a bombshell in the final page of Avengers #42 that, for better or worse, was guaranteed to make headlines.

Suddenly, the mighty Thor was no longer the son of Earth goddess Gaea, but rather the product of a millennia-old love affair between Odin and a prehistoric Phoenix host. Thor fans despaired at the altering of their favorite hero’s origin, X-Men fans rolled their eyes at the cheapening of a once iconic entity from their favorite franchise, and everyone else placed their bets on when this poorly received retcon would be undone. Anyone who guessed 18 months can now collect their winnings, since Avengers 1,000,000 BC exists primarily as an outlet for Jason Aaron to do damage control. 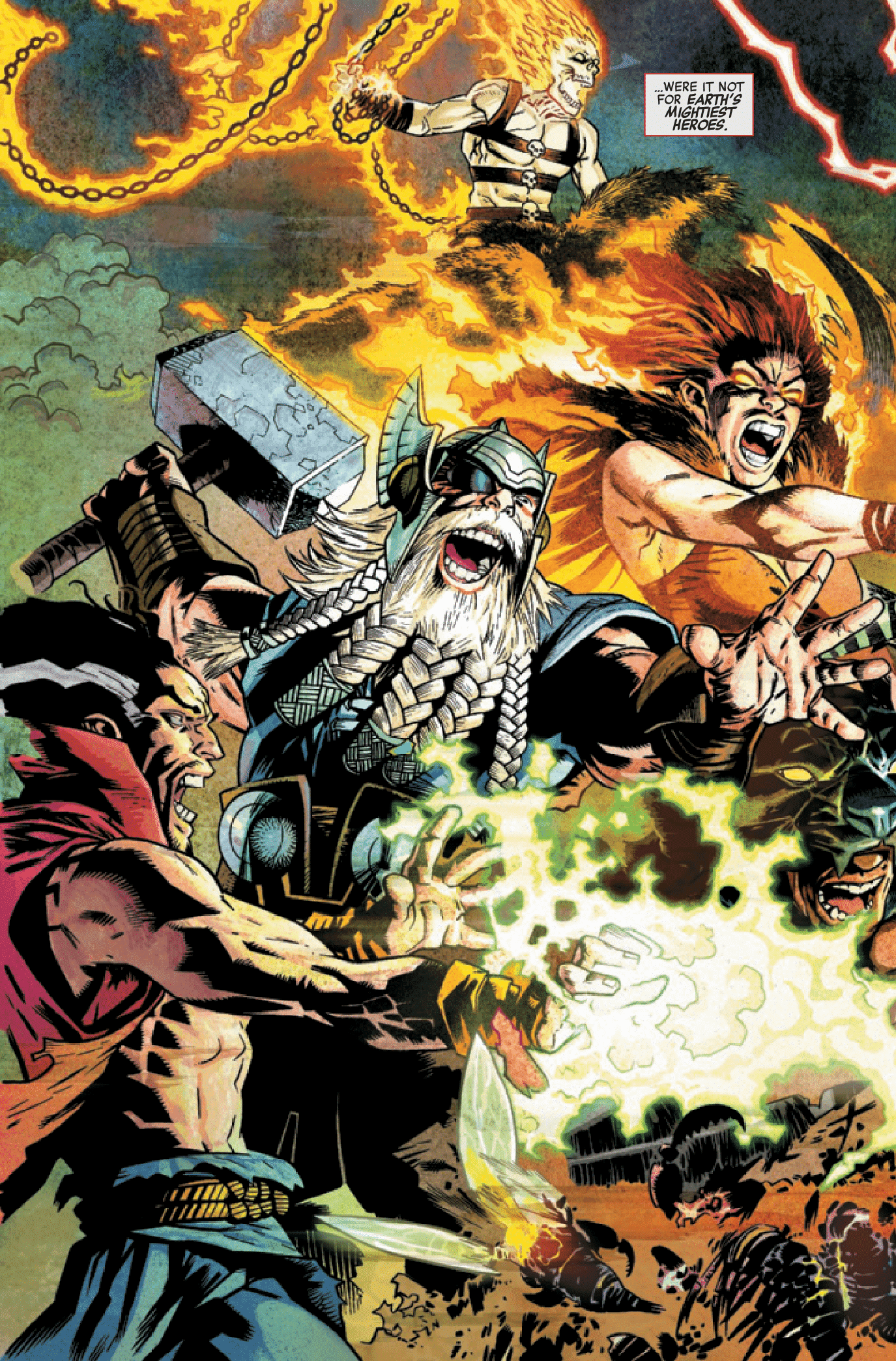 It turns out that the Phoenix was responsible for persuading Gaea into a relationship with Odin in the hopes of producing a benevolent god to act as a guardian for humanity. Gaea’s role as Thor’s biological mother is reinstated and Phoenix is repositioned as an honorary maternal figure. When the infant thunder god is nearly turned to solid ice by a vengeful frost giant king, it is the Phoenix who takes him in her arms and burns life back into his body. All things considered, Aaron handles the unraveling of his controversial retcon in the cleanest way possible while simultaneously providing some much needed introspection into his personal iteration of the Phoenix. No longer is she just a nameless cave woman defined by her relationship with Odin, and her metaphorical birthing of Thor proves to be an effective ending to a surprisingly tragic history. As a once powerless ancestor of man struggling to survive in savage land, her dedication to the defense of Earth and all its inhabitants makes perfect sense, and, with the addition of her endearing friendship with Gaea, makes her an empathetic figure.

Odin does not fare nearly as well in comparison. Many Thor fans already credit Jason Aaron with the All-Father’s devolution from a stern, yet respectable king to a belligerent and pitiful figure. Anyone who shares that opinion will not be persuaded otherwise after reading this issue. While not a villain, Odin is undoubtedly the antagonist of this one-shot, whose arrogance and pride leads to several broken hearts and the disbanding of the original Avengers team.

Despite these shortcomings, this one-shot still surpasses the quality of the current Avengers ongoing, although I am not sure how meaningful of a compliment that can be at this point. At the very least, as someone who genuinely enjoyed Aaron’s recent contributions to Conan the Barbarian, I can tell that he relishes bringing the same barbaric, sword-and-sorcery flare to this comic, and the tone he establishes is held up by the wonderful artwork of Kev Walker and colorist Dean White, who bring the appropriate level of grit and brutality to this primitive setting.

Avengers 1,000,000 BC provides some of the interpersonal drama and conflict that the current Avengers ongoing has been desperately needing, but does not devote enough time to expanding upon character relationships in any meaningful way. And it certainly does not succeed in making Thor's birth feel like a monumental event.