Avengers #25: (Ghost) Riders on the Storm 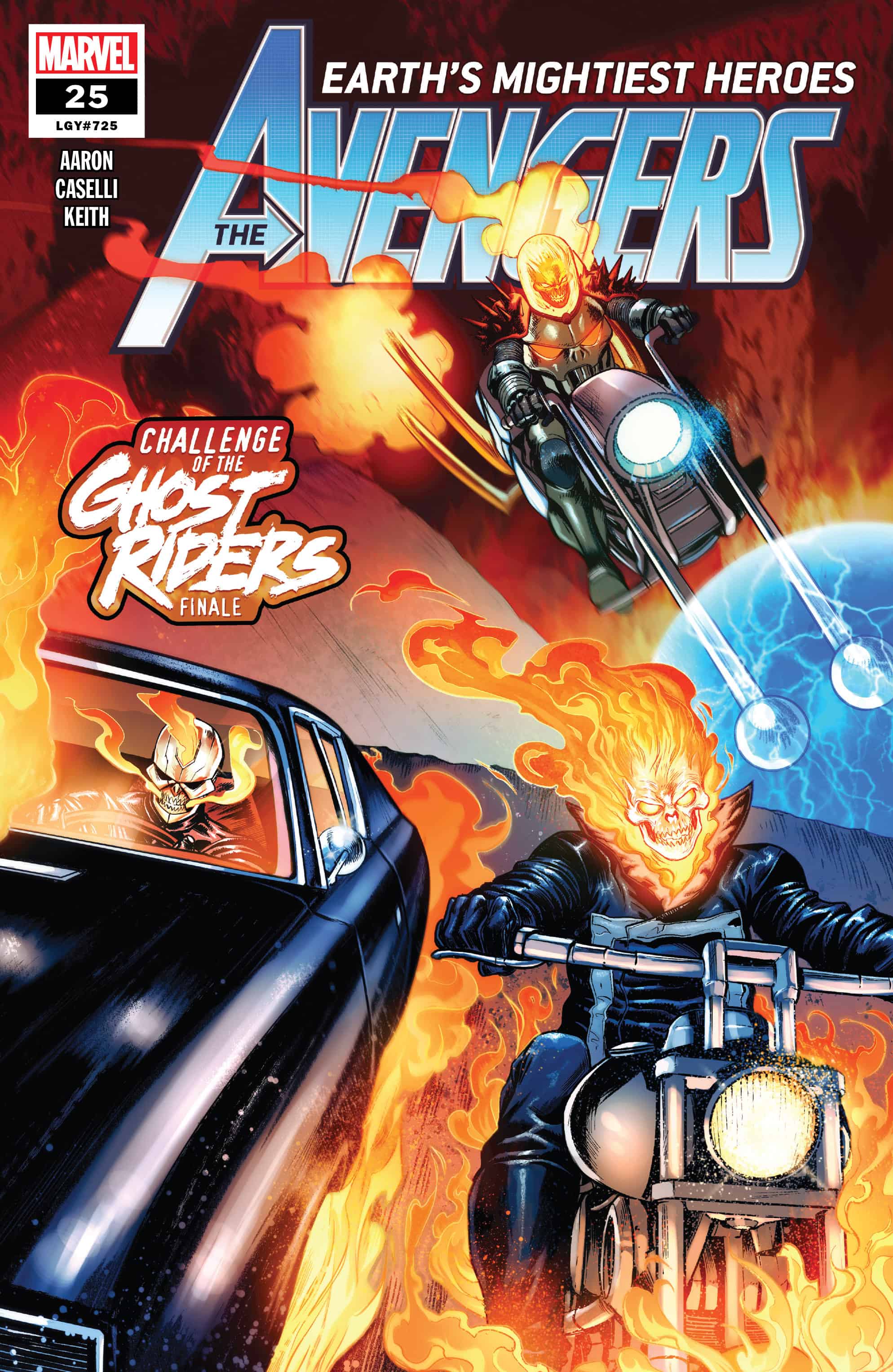 "Challenge of the Ghost Riders" races to its conclusion! Where last we left Robbie Reyes, all seemed lost as his car had been destroyed, leaving the race's ending all but inevitable.

Sure we were all THINKING it, but you don't just come out and say it, Death Celestial.

But sure enough, when all hope is lost, Robbie's fellow Avengers arrive (albeit in the most ludicrous way possible) to save the day! 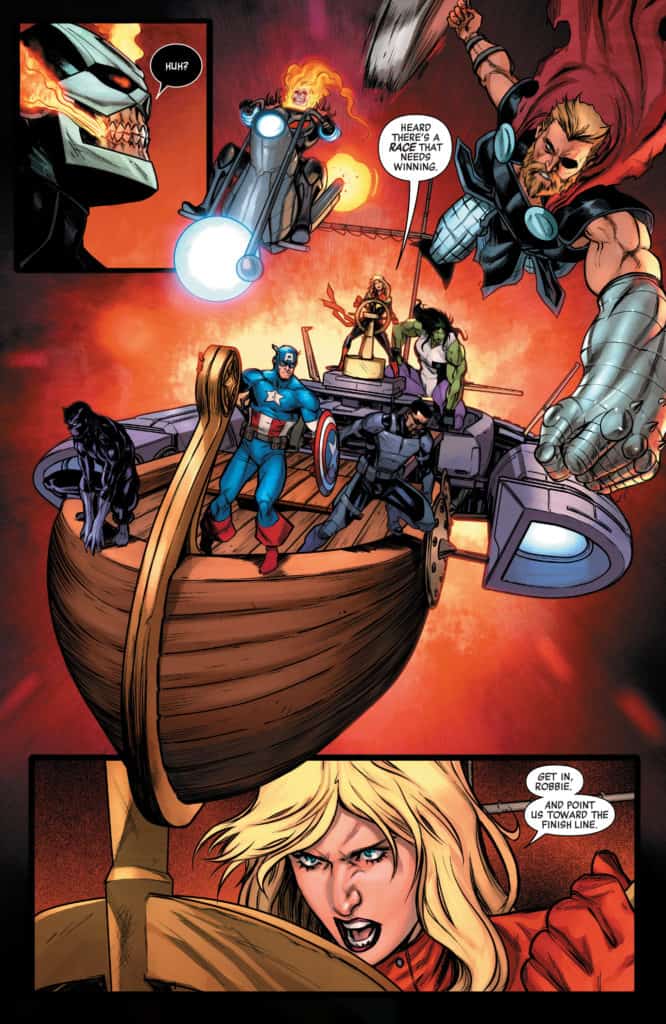 It's a neck-and-neck tie, a photo finish to the end for Robbie and current King of Hell Johnny Blaze!

The race comes to a dramatic conclusion... but who will be the King of Hell, and who will face eternal damnation?!

Elsewhere... or maybe elseWHEN... Iron Man makes a stunning discovery that will have consequences stretching on for millennia! 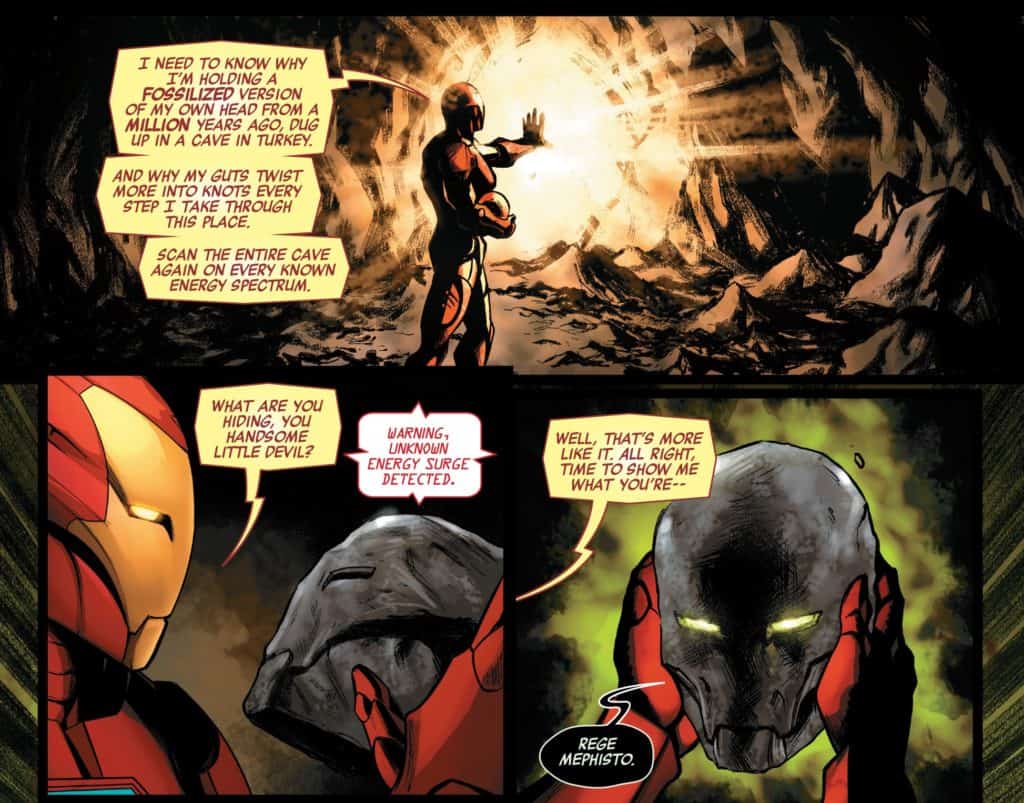 For twenty-five issues now, writer Jason Aaron has had the reins of the Avengers’ world, and for twenty-five issues, his raison d’etre has been to go big or go home. It can’t be said that he hasn’t lived up to that standard, but… at what cost? His Avengers seems to be written solely for his own amusement, with featherweight plots, barely-there characterization, and far, far too many moments and/or dialogue that can be met only with eye-rolling. I’ve read good Jason Aaron: his original Ghost Rider run is the stuff Grindhouse‘s dreams were made of; Scalped is a modern crime fiction classic; vast swaths of his Thor run are either really, really good or absolutely outstanding. There have been some duds over the years, too, but I tend to believe Aaron’s good comics outweigh the bad.

Why, then, is he so content to coast on Avengers? It’s a big, exciting canvas for him to paint on, sure, but twenty-five issues in and the nicest thing I can say about it is it’s basically a forgettable summer popcorn flick of a comic, or as my fellow Comic Watcher Cody White would put it, the man’s the Jason Statham of cashing a check. Can’t say I disagree as far as his Avengers is concerned; and that’s not even going into the complete and utter sea of wordplay cheese that is entitling this issue “Spirit of AVENGEance.” It’s the Avengers. And Ghost Rider, who is the Spirit of Vengeance. GET IT? That sound you just heard through the internet was your humble reviewer rolling his eyes hard enough for you, dear reader, to hear them yourself.

Aaron doesn’t stop hitting readers of the head with such literary abominations there, though. He also has to have the Avengers show up in a flying pirate ship (much like the time he had the X-Men zipping around in the afterlife in a flying pirate sip, or three different Thors flying through space on a flying pirate ship), and Cap stoutly proclaiming that “This isn’t Hell. Buchenwald ’45, that was Hell.” Oh, Cap! You sassy devil. But you’re standing in the actual, literal Hell. At one point Captain Marvel says that “nobody’s about to out Fast and Furious Carol Danvers” then tells She-Hulk that this is the part of the movie when the driver hits the nitrous and refers to Jen as her gamma-powered turbo charge. The entire issue is rife with awful one-liners like that which fail to land in any meaningful way. No one here has an actual conversation; they either spit godawful one-liners to no one in particular or preach from a soapbox, like Robbie does about the power of family at the end. Yes, you read that right – under Jason Aaron’s guidance, Ghost Rider is spouting dialogue worthy of a Hallmark Christmas special. In Hell. To another Ghost Rider.

Even Sergio Caselli – typically no slouch in the art department, rendering panels that look akin to animation cells – falls completely flat here, looking less like himself and more like a cut-rate Mark Bagley knockoff. I’m not sure if it was the inking or the coloring that’s to blame, but I’ve been following Caselli’s art for years, and this is easily the weakest I’ve ever seen from him.

And then, in the end, nothing changes. For all the team has gone through in the previous four issues, they’re right back where they started and nothing is different except that Robbie Reyes feels little better about himself. This is perhaps this issue’s most egregious sin – Aaron has asked readers to come along with him for a trip through Hell, and in the end, gave them nothing for their trouble. Nothing was accomplished, no status quo changed. The entire “Challenge of the Ghost Riders” story has proven to be an entirely vacuous affair from start to finish – pure style over substance. And I’m sorry to say, a perfect representation of everything that’s been wrong with Jason Aaron’s Avengers run from the very start.

As "Challenge of the Ghost Riders" concludes, readers are forced to ask: What happened here? What was the point? What changed? And unfortunately, Jason Aaron has no answers for them. An alarmingly weak comic from a writer very, very clearly amusing himself - and no one else - all the way to the bank.

Avengers #25: (Ghost) Riders on the Storm