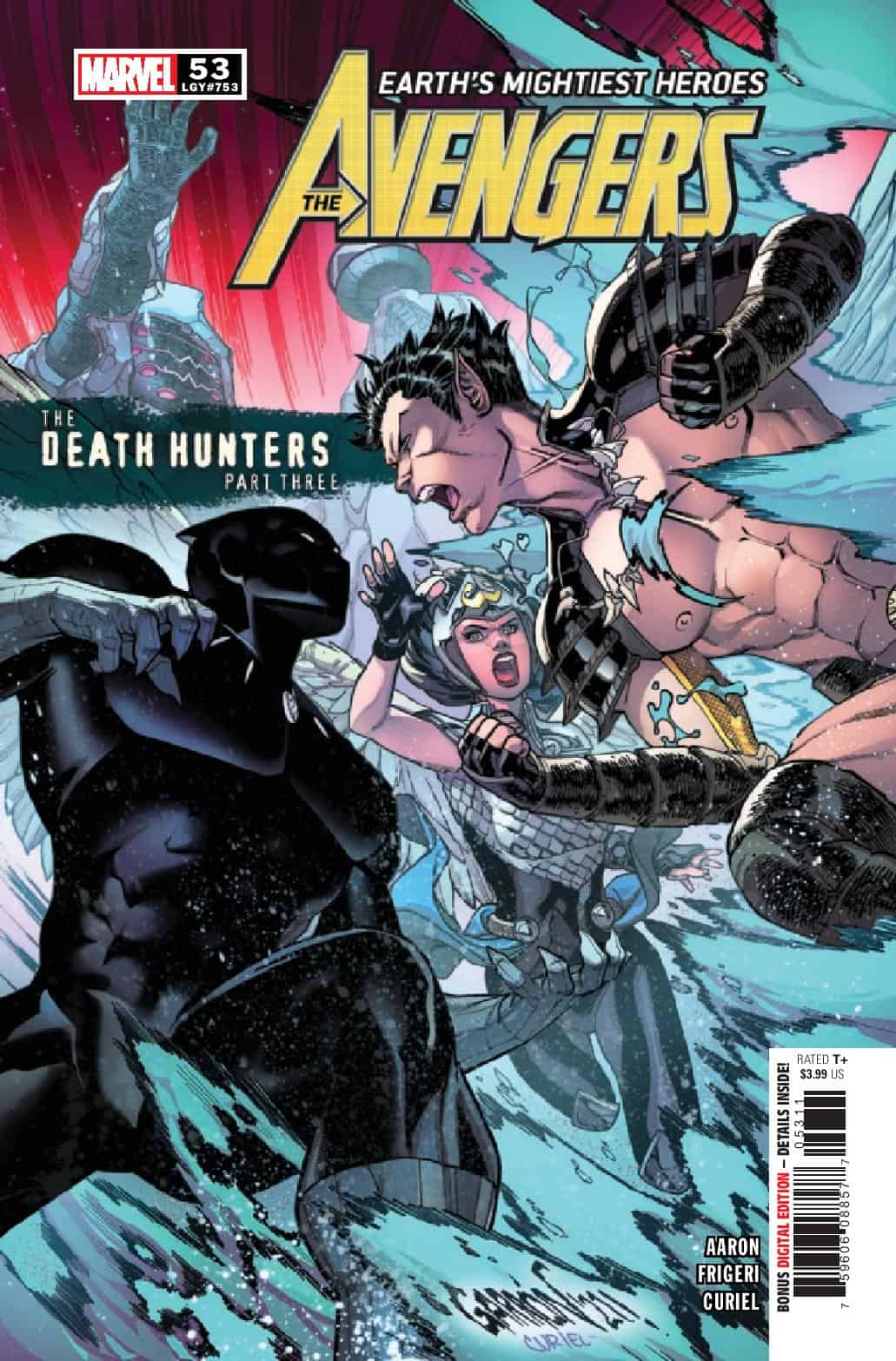 ASSAULT ON AVENGERS MOUNTAIN! The Avengers' impenetrable headquarters is under attack, by the most supremely powerful version of Dr. Doom in existence and a wildly murderous Young Thanos, still wet with his mother's blood. The Black Panther fights to defend the mountain alongside his surprising new teammates, King Namor of Atlantis and Jane Foster, the mighty Valkyrie.

We’re 3 chapters into the Doom Supreme’s version of the Masters of Evil, and the issue is basically one long fight. We jump from Avenger to Avenger, but spend the most time on the newest recruits, Valkyrie and Namor. It’s nice to see some new blood because the roster hasn’t changed all that much in the first 50 issues, so getting these new members on the team is a breath of fresh air. Especially adding Jane Foster. Aaron spent years building up her story arc dealing with cancer, as well as the role of Thor, up to her current role as the leader of the new Valkyries, and possesses the all-weapon (aka the Ultimate Thor’s hammer). Also, adding Namor to this group after spending the last 4 years painting him as an antagonist, where he goes from here, and the buttons he pushes, can only add to the drama that this series sometimes feels it needs.

Jason Aaron’s been on this title for quite awhile, and has given us a wide array of threats to go up against. He’s arguably been the guiding force behind the Marvel line, as he’s been the driving force behind two of the major crossovers since 2018, with Realm of Kings, and last year’s Heroes Reborn. You could say that Aaron basically has been one of the main architects of the Marvel universe. Aaron seems to try to up the ante, and one up himself with every new arc, and that’s been one of the pitfalls that has plagued his run. Some of the arcs have hit, while others have not been as strong as they could be. The material has potential, it’s the execution that doesn’t always hit the way it should. Luckily this issue landed better than some others have, especially with the cliffhanger at the end.

Juan Frigeri provides the art here, and everything looks amazing. His work on the Guardians of the Galaxy really put him on my radar, and his work here is just amazing. His Namor is majestic, and his Valkyrie is fierce and defiant. She goes heads up with Doom, and has the chutzpah one needs to go up against arguably Marvel’s very best villain. His style really compliments Javier Garron’s style, and it really makes me happy to see him get work on a high profile book like the Avengers. I hope to see him return after this arc finishes, because he has a lot more to show.

Jason Aaron’s run on the Avengers has been a roller coaster of peaks and valleys in regards of quality, but has hit his groove with this and the last, where She-Hulk regained her regular Shulkieness. I hope he continues on this hot streak.